One of the reasons we bid on Doha (and were excited to get it) was the fact that Qatar Airways offers direct flights from Doha to Houston, Texas (the closest international airport to Mason's dad). In addition, Mason has passed the 'older than 13 years old' threshold. Meaning he can take direct international flights unaccompanied and you don't have to pay the extra fees for an escort (which is like an additional ticket). While at our last post, we learned the State Department allows children of divorced parents one trip a year to visit the other parent. You see where I'm going with this! After not being able to see his dad much while we were in Fiji (three connections was the most direct), Mason can now get two trips a year (he usually visits once while we are on R&R/home leave and now this second trip).

Given we know where were are heading about 8 months out, we've been prepping him for this for a while. We've been giving him his passport/ticket to deal with in the airport, letting him go first when we hit security, immigration, Global Entry kiosks, etc. That let let him practice what he's doing while we are right there if there was a question. It probably also helps that when stateside, since he was eight he has been flying unaccompanied back and forth across the US. With Southwest Airlines, when he turned twelve he became a "young traveler". Meaning which ever parent dropped him off could get a gate pass and accompany him/wait at the gate and the parent picking up could also get a gate pass to meet them upon arrival (unless the flight arrives after 10pm and you arrive at 8:30pm and TSA has already closed up). As a "young traveler" forms confirming who was picking up the child were no longer needed (Thank goodness for cell phones).

For his trip, I made him an international flight to-do's check list. He hadn't flown this airline so we weren't exactly sure on their procedures. We did find out in advance there was a form to be filled out, but none of the store front locations ever had any forms on hand. So Richard and I made a special trip to the airport to pick up a copy. So I will share the check list and then say how it worked out.

Departure from Qatar:
• After security put Q-ID into wallet (keep wallet in travel pouch)
• Keep boarding pass and passport together in the front pocket of backpack
• Find Gate, wait nearby so you hear boarding calls
• Get passport and ticket out for boarding, show to agent when your boarding group is called

Arrival in Texas:
• Text your Dad to let him know your plane has landed (if texting doesn’t work, call).
o Dad: XXX-XXX-XXXX Stepmom : XXX-XXX-XXXX
• If no one is assisting you, ask a gate agent how to get to immigration/passport control
o Someone with Qatar Airways uniform/jacket should be just outside the gangway
• Find Global Entry kiosks at immigration/passport control
• Scan passport, pose for picture, enter data from customs declaration form, get printout
• Show to immigration agent if needed (has an X on your printout) or be waved by.
• If asked what were you doing in Qatar respond, “my stepdad works in Qatar for xxxxxxxxx”
• Head to baggage claim and retrieve suitcase(s)
• Find ‘Global Entry’ line and walk through customs (turn in the printout at this point if asked)
• Meet your dad & stepmom outside customs/baggage claim area
• Put passport back in travel pouch
• Text me to let know you have arrived/made it through and found your Dad okay.

Departure from Texas:
• Check in at ticket counter
• Have Dad/Stepmom buy you two Subway sandwiches to put in your backpack
o 1 sandwich while waiting to get on the plane
o 1 sandwich for the flight
• Enter TSA pre-check line (if printed on your boarding pass)
• After security put passport and boarding pass in the front pocket of backpack
• Find gate, wait nearby so you hear boarding calls
• Get passport and ticket out for boarding, show to agent when your boarding group is called

On board the return flight:
• Put boarding pass stub (keep) and passport back in travel pouch
• Put in phone in airplane mode, turn off cell phone
• Put Qatari SIM card back into phone (put Blackwireless SIM/paper clip in travel pouch)

Arrival in Qatar:
• Text your me to let him know your plane has landed
• If no one is assisting you, ask a gate agent how to get to immigration/passport control
• Show security agent your Diplomatic passport and you should be directed to the Diplomat Line
• Hand the agent your passport and Q-ID
• If asked why you coming into Qatar respond, “my stepdad works in Qatar for xxxxxxxx”
• Put passport & Q-ID back in travel pouch
• Head to baggage claim and retrieve suitcase(s)
• Exit baggage claim (if bag is flagged, take to x-ray)
• I’ll be where I picked you up from Sri Lanka
• Text your dad to let him know you have arrived/made it through and found me okay.

So now, how did it work you ask?

Well a couple other prep things we did.

• I made him a special travel pouch that would hold all his important documents. This would help him stay organized/not lose anything.

• You can print out the US customs form online (the one they pass out after boarding) and with Global Entry you don't need the form you enter everything at the kiosk. So we filled in the form, so he would know the answers (ie address of where you are staying) and I left a few blank in regards to food (in case he wouldn't eat all his snacks). He ended up eating all snacks on the plane (it was the 24th longest direct flight in the world - 16.5 hours! He had a meal just after take off and before landing, but had a long stretch in the middle with no meal service and used those snacks then!).

• We were thrown for a bit of a loop at check-in here in Doha. Only passengers with tickets were allowed to stand in line/go up to the counter. They told me to go stand to the side and if they needed me they would bring me over. I am not sure what all was discussed, but Mason got a ticket and then walked over to me and said he could head to security. We aren't sure if he was suppose to wait for someone to escort him (it was a little after 5:00am, so we were all tired, and he may not have been listening). He did make it through security and to his gate all on his own. At which point, I got a phone call from an agent (my number was on the UM form) saying she had talked to him and he was fine waiting by himself and was I okay with that. Well since he had made it through customs/security (the "hard" part), I was okay with that.

• We also made him an authorized user on one of our credit cards (so he was issued a card in his name). He took this card with him for emergencies only (what if they had to do an emergency landing somewhere and he needed food). We warned him, any unnecessary purchases made on the card, he would pay us back for. He also had some cash on him (local and US currency), if he needed a snack while waiting at the gates.

• He did a great job informing everyone what was going on. 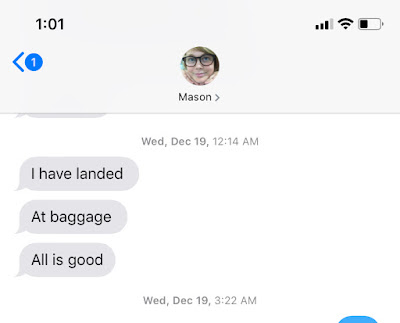 • Even got a photo once they made it to the car! 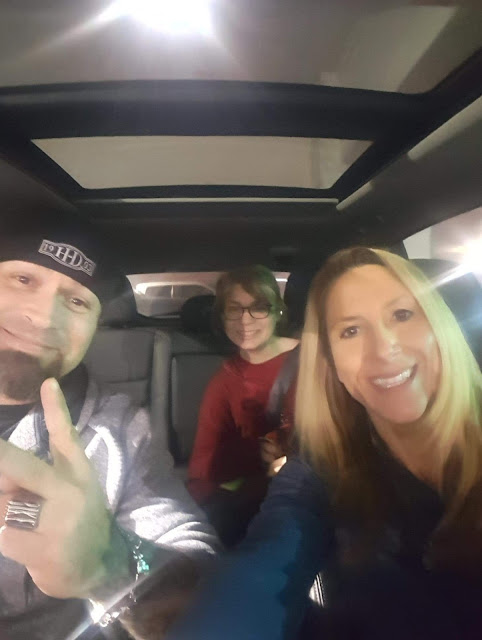 • On his return flight, his dad was able to walk up to the counter with him. He had his paper work being handled by a gate agent, upon arrival he had to wait for everyone to disembark and then he was escorted through everything (apparently there are special short lines for situations like this)!! We saw him and held up the sign Clarissa had painted for him when he was walking out of the secured baggage area. 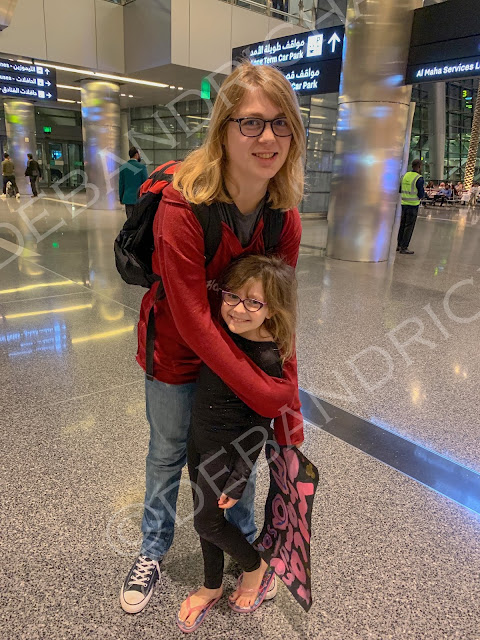 • I printed the check list making it double sided (each trip was on opposite sides) and then laminated. I asked if he used the checklist and was it helpful. He said yes and he used it. So I'm glad we made it and the nights before his flights we would remind him of all the things to do (they say others hear 1/3 of what someone says to them....so if we went over it enough we figured it would all get through...lol). So I figured I can pay it forward and share the checklist we used (obviously some things were marked out for privacy/security reasons), no need to reinvent the wheel.

For Foreign Service Folk specifically, if you are at a post where the city-pair for the Fly America Act requires an international layover, you can apply for a wavier for the UM to take the direct flight. Here's the FAM info: