We did a number of fun things this year to celebrate Christmas. The weekend before Mason flew out to Texas, the Embassy held its annual Children's Holiday Party....complete with Santa arriving via motor cycle (still doesn't top Mason's first Christmas with Santa arriving in a fighter jet!). 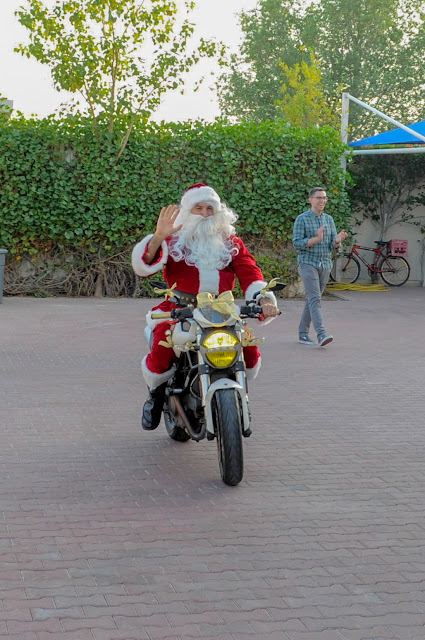 Everyone was quite amused, but Mason kindly emojified everyone else's faces for privacy. He is good at that and making wallpapers for phone backgrounds (check out his handiwork here!) 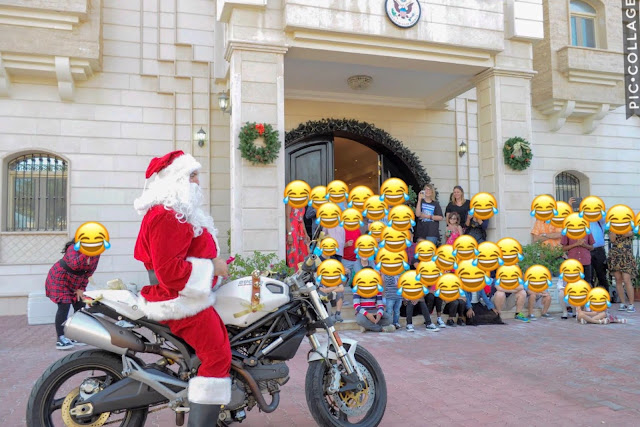 Of course there was one on one time to chat with Santa. Clarissa (girl who wakes up around 5:00 am - weekends and holidays too) asked Santa for sleep (?!?!) and Mason asked for some Magic the Gathering game cards (which Mom had already gotten him! Score!!). BTW - doesn't the tree behind them look awesome?!? I was one of the elves that helped decorate for the party!! 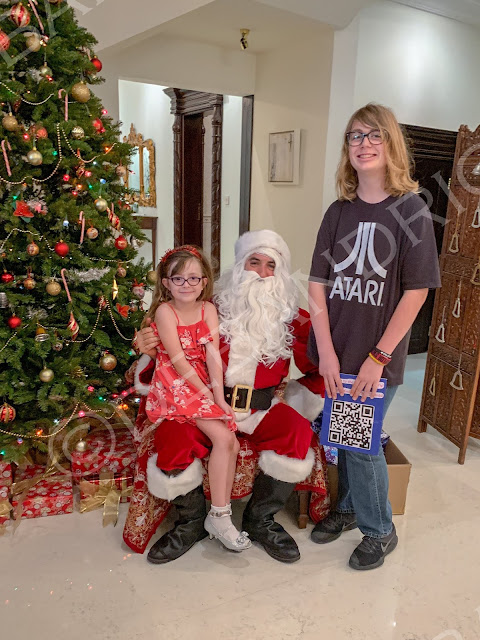 After Mason flew out, Clarissa and I made cookies for Santa and winter mints from some edible dough we made. We opted to make an army of penguin after my "polar bear" looks like a white pig wearing a workout headband from the 1980s. 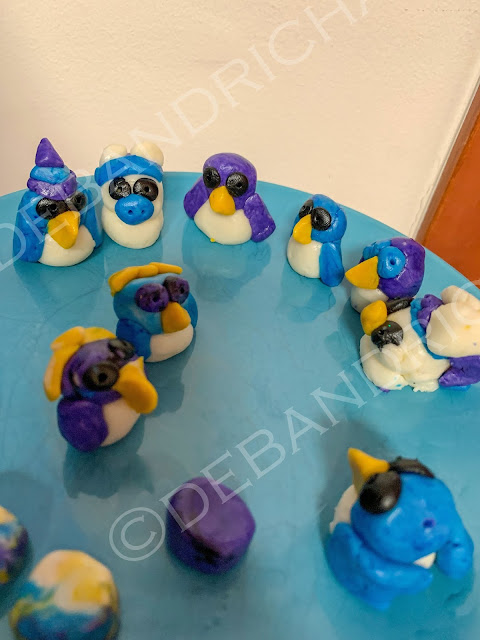 I got around to making a tree skirt as well (all locally acquired fabrics...the lighter green had little sparkly bits in it so I made that the main fabric). Isa was inspecting my handiwork. We went light on ornaments not know how she would do with the tree (since we didn't put one up last year due to our Australian cruise). She sniffed it a lot and we found the random ornament on the ground here and there. So for the most part she did really good, until we started taking it down and she tried to climb up the main trunk. We also made some cinnamon/applesauce ornaments, so its possible the smell deterred her a bit too. 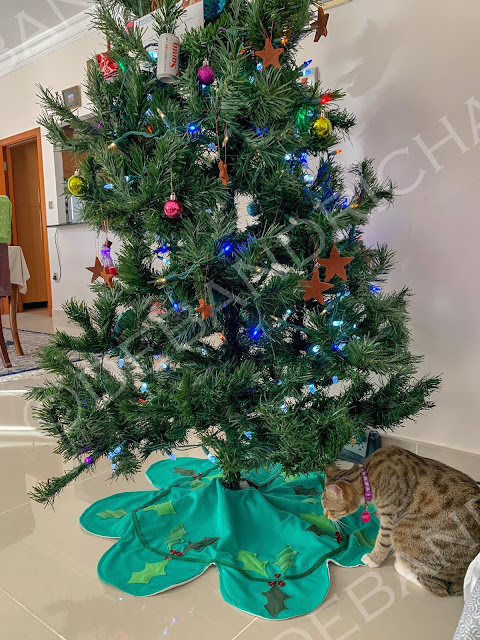 On Christmas Eve Eve, Richard took a vacation day and we took a trip out to Banana Island. I wrote all about it here! 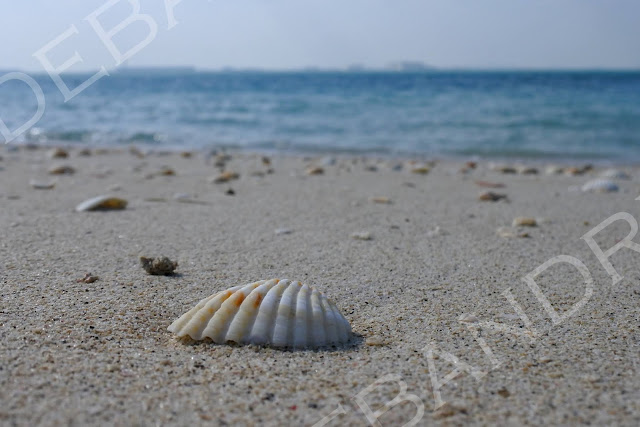 On Christmas Eve, we had booked ourselves on a Christmas Dhow Boat trip. It left just after sunset, provided us dinner and entertainment in the form of Santa. As we left the dock, the Spiral Mosque was glowing brightly onshore. 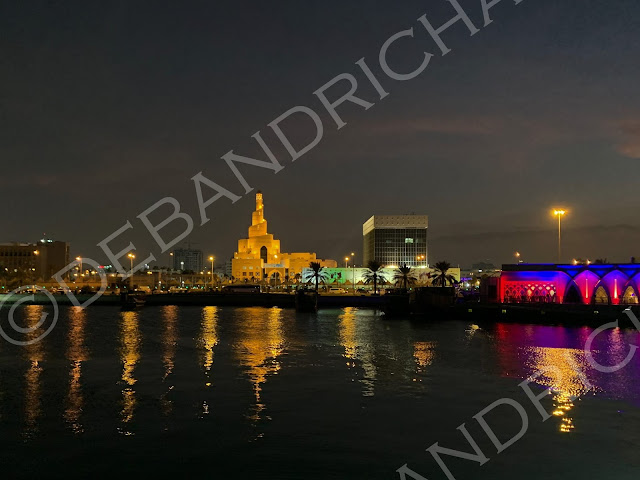 On the Dhow boat, on the bottom level there was a room with soft velvety cushions. 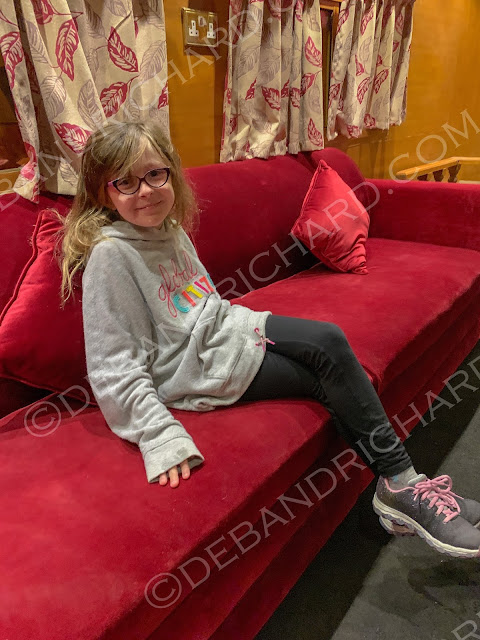 While in this room, I saw a ladder heading upstairs. The view was much better on the top deck of the Dhow boat (just a smidge colder). Santa not only arrived on the boat but passed out presents! 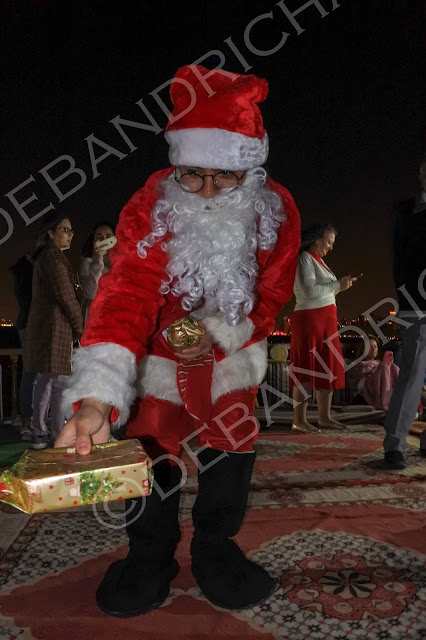 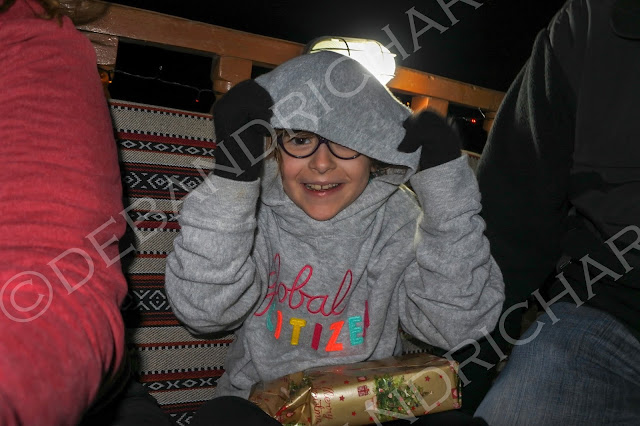 In addition, Santa showed off some of the new dances the elves have come up with.


Clarissa was too cold to get up, so she was happy to take my photo with Santa. 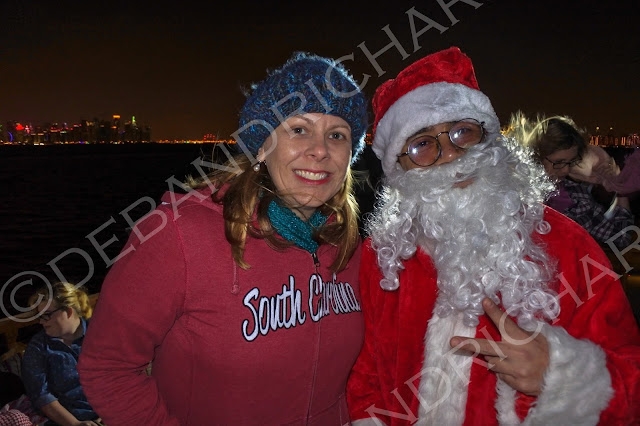 After Santa's grand entrance (which we had been watching them grill chicken on the back of the boat), dinner was ready. Richard/everyone else headed down for some food. Clarissa finally took my suggestion to get up and floss (I thought it would be funny to challenge Santa)....

We enjoyed great views of the city skyline all lit up. Given how cold we had been the day before on Banana Island, we had smartly brought warm sweatshirts, gloves and scarves. I feel we got a couple odd looks before the boat left the dock being all bundled up, but as soon as we were underway we stayed warmer and others were all cuddled up and under blankets to keep warm. Once the moon rose up in the sky it was a great view!

We got home past someone's bedtime. She was quick to get ready for bed as she didn't want to miss out on Santa stopping by our house. Sure enough he did stop by (even left a couple things for Mason here). 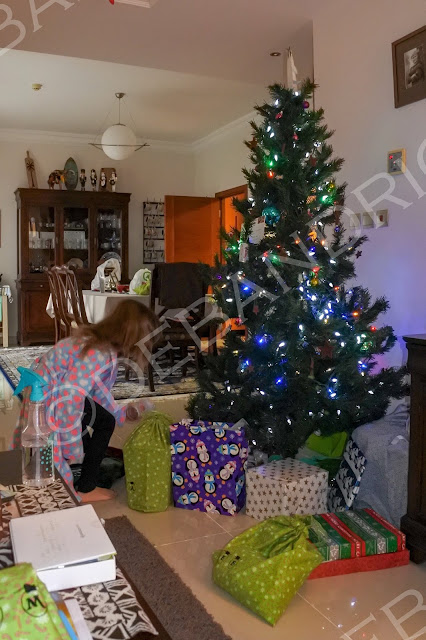 We still had another week before Mason got home. So Clarissa and I worked on some projects around the house. We got the last of her toys put away (or added to the sell/give-away pile). We also got around to making the cover for her 'daybed'. I took a fitted sheet and added some extra length around the bottom with fabric from the top sheet (totally cheated and cut it so I could use the top sheet trim and not have to hem that side). In Fiji, there was a shop where you could get all sorts of shape/size pillow inserts. I have looked for a while and have not been able to find any such pillows here. So we ended up using a body pillow that I found on sale. We had left over top sheet fabric, so we made a envelope pillowcase to match. Since this was an easy stitch (no elastic to deal with), I had Clarissa put her sewing skills to use! 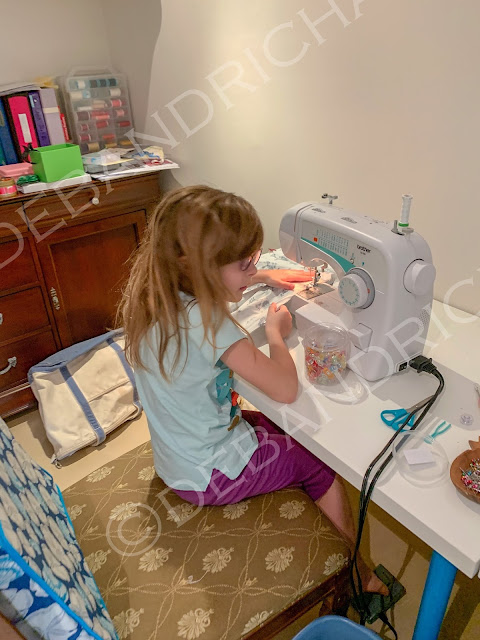 On the off chance you feel that is a staged photo (which she didn't want me documenting her sewing), here's a video clip that I snuck in and tried to get!


We attempted to tie-dye the sheets. A bit of the blue dye took (and all the thread from our stitches took), but I guess this is a synthetic fabric and all our hard work washed right out. Regardless, she was super proud of the finished product. 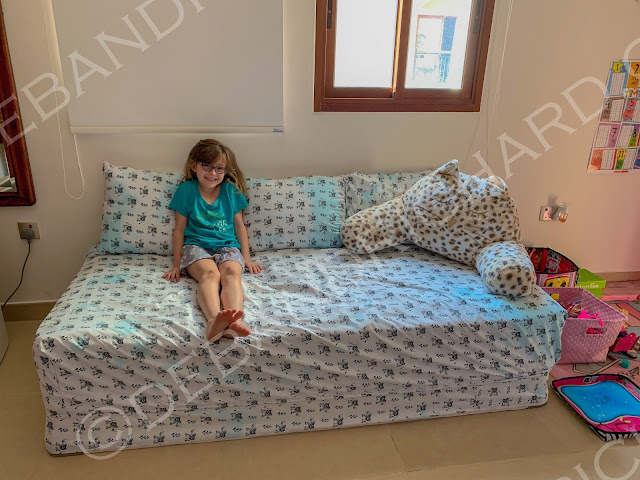 We squeezed in some dentist appointments, grocery shopping, and a special lunch date. We discovered the Steak'n'Shake here. There are several big murals on the walls of photos from the 1950s....of all the murals in all the Steak'n'Shakes, Doha has a mural of a St. Louis Steak'n'Shake. Based on the year, my dad was a teenager....so we had to take a picture and send it to my dad to see if recognized/had eaten at that location! 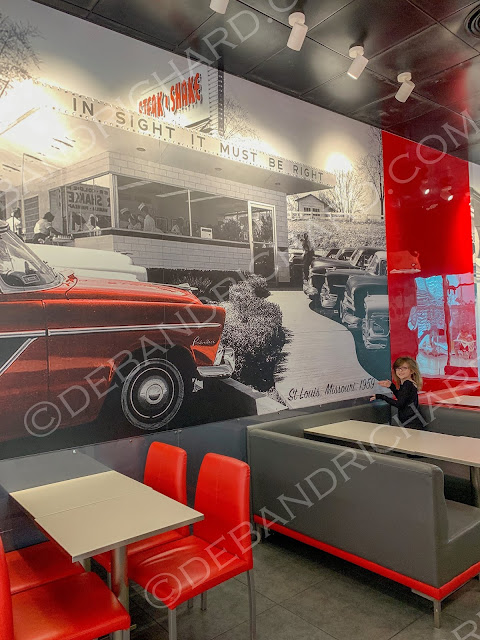 Mason arrived back home on the 30th, we had a quiet New Year's Eve (Richard and I headed to a neighbor's house, the kids watched movies, we made it home in time to ring in the New Year with Mason). School started back on last Sunday....and we are back into the craziness of school/yearbook/ice skating lessons/Brownie meetings.
Posted by Deb at 4:30 AM