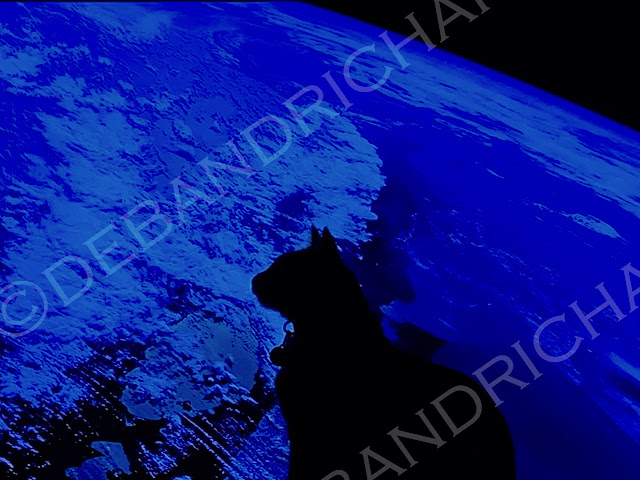 Email ThisBlogThis!Share to TwitterShare to FacebookShare to Pinterest
Labels: #IsaLeiMeow

As wordy as that title is....leaving out 'themed' made it seem we were making mermaid slime....which gave me marine biology lab/fishing boat flashbacks (fish can be slimy) and that didn't sound very fun.....lol.

So for Clarissa's 9th birthday (eek! last year in the single digits), she decided she wanted a 'girls only' party. So her requested mermaid theme would be perfect. For the 'main event' activity it was slime making! So this is just the nuts and bolts of what we did! 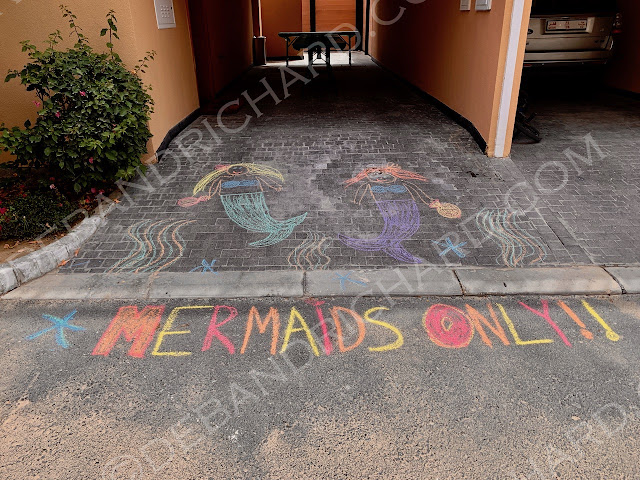 Of course you can't tell in the photo that I used glitter/sparkle chalk.

I found some adorable clip art at Design Bundles. I received an award from my CLO days in Suva, which came with a bonus. Last fall, it finally came through (only took six months), but I put that toward getting myself a Cricut cutting machine....something I'd be eyeballing for few years now. So with my Cricut, I used the mermaids clip art for the invite, on top everyone's slime container, food markers, and little stickers for the bottoms of Hershey kisses. 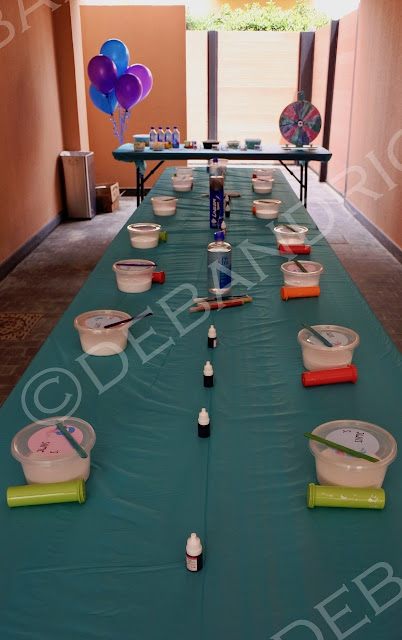 I was able to borrow some folding tables from the embassy and we set up everything in our carport....a hose-able space to keep the mess under control....lol. Each spot was set up with a takeaway container of w/5oz of glue, a mixer (aka colorful popsicle stick), and an empty mini m&m container. I put the food coloring, shaving cream and activator in the middle of the table. On each container I made stickers (literally a last minute idea just hours before the party started) and had markers out for the girls to write their names (on the off chance someone forgot to take their slime home.....Clarissa would know who to give it back to at school). 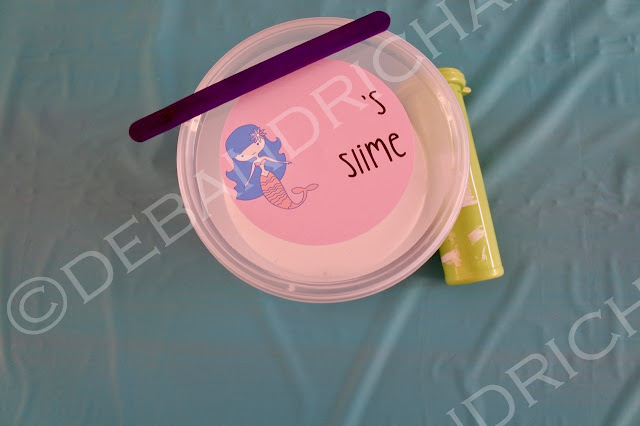 Then the crowned jewel of the slime....the mix-ins. Someone may or may not watch too much YouTube and loves watching slime making videos where the unknown is the magic/excitement of the slime making. IKEA had this mini spinner and I made mermaid themed items for them to spin for. Then they would pour a bit in the m&m container and spin again! I then labeled the mix ins with the fun mermaid items (so the foam balls = bubbles, star shaped confetti = sea stars, you get the idea). 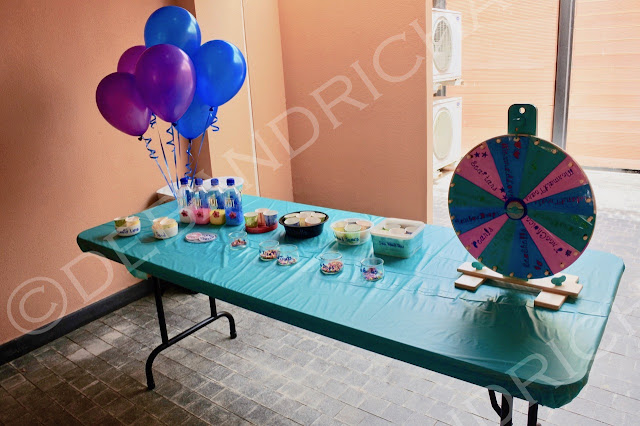 This was quite the hopping spot! For girls that arrived at the beginning they had something to do while others were still showing up. The trickling in made it so there was never a backup at the spinning. The m&m container helped control how much they took (oh your container is full, time to start making your slime). 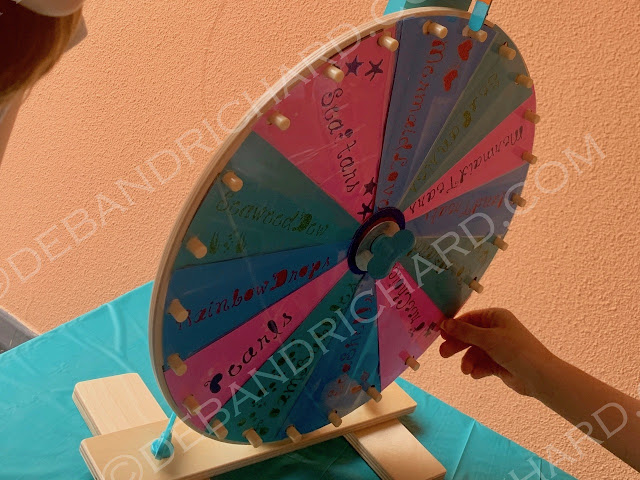 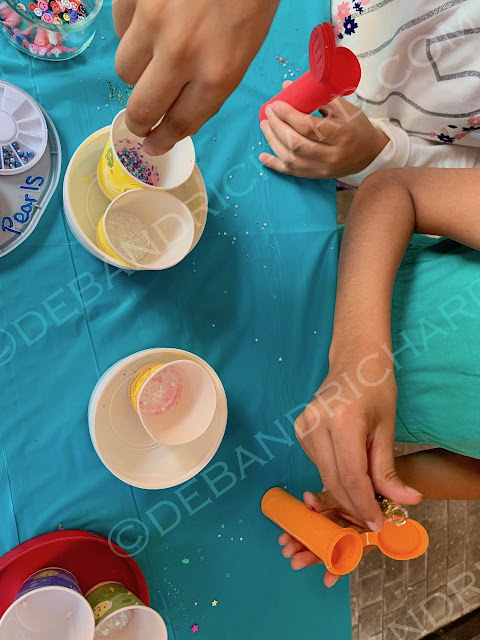 Given they were 8 & 9 year old girls....this was the easy part and they are all experts in the slime making. 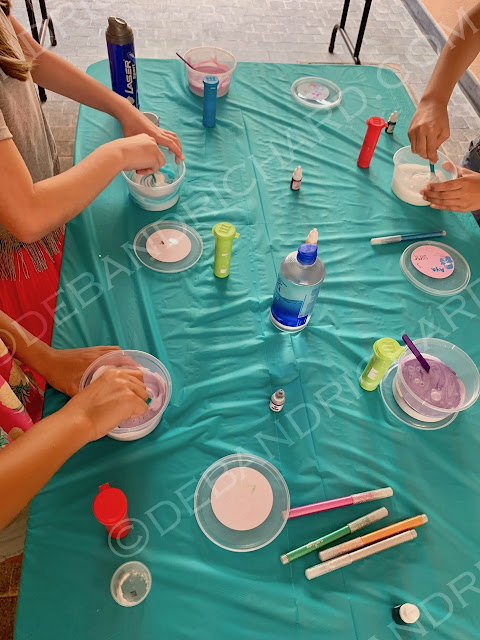 Once everyone's slime was made they washed their hands and moved inside for a snacks. It was a mid afternoon party, so I didn't have to worry about a meal. (FYI: these food name ideas were brought to you by Pinterest! Thanks it was fun!!). 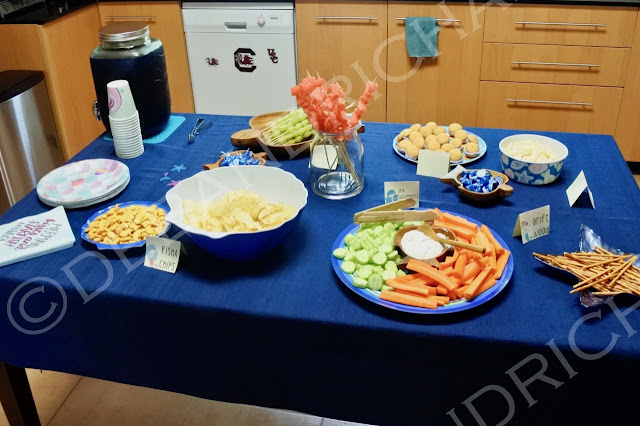 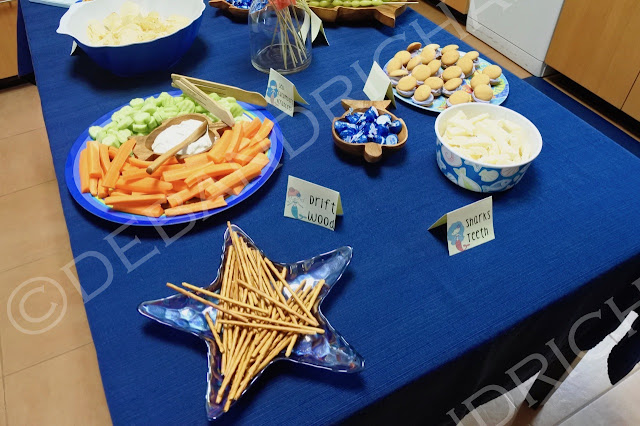 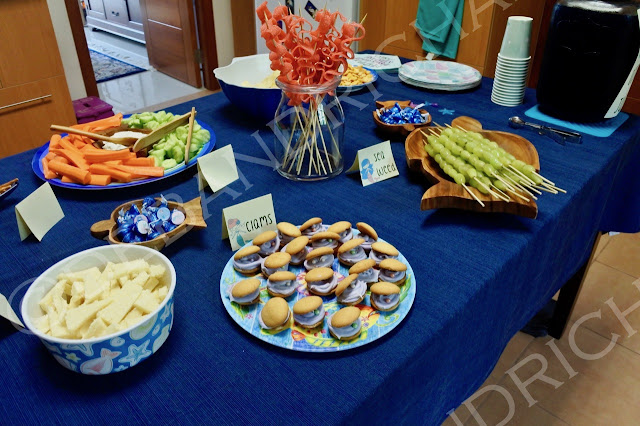 The two biggest hits were the candy sea weed (the grape sea weed, not so much) and the 'ocean juice'. The candy sea weed was just fruit strips on skewers. The ocean juice I got from this video. It was super easy to make, though I did have to modify a bit as I didn't have the correct syrup (I used blue raspberry shaved ice syrup). It was delicious! 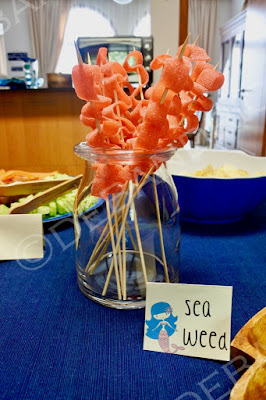 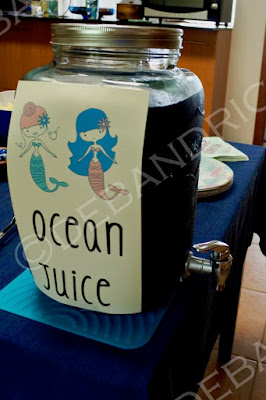 While the girls ate and ran around the playground across the street a bit, we swapped out the glue covered (there was one slime fail) slime table cloth and put down a fresh one. Once that was down I set up mini cupcakes, icing, and all types of sprinkles. We called the girls back and they went to town! 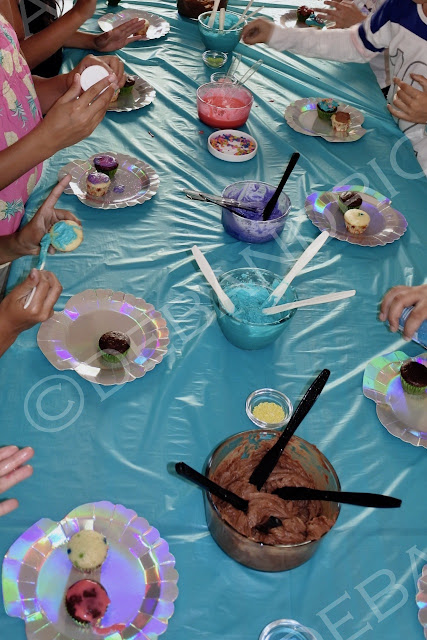 Such artistry! I had several girls tell me that this was the most fun party! Woo hoo! Yet, they did all the work, lol! 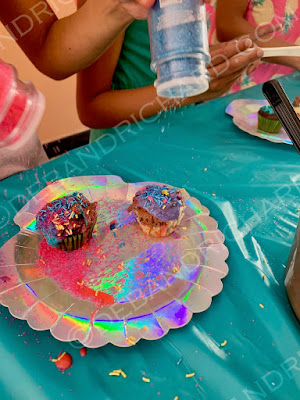 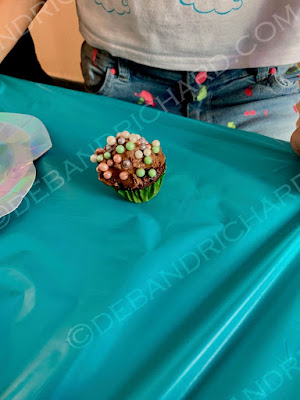 After cupcake decorating/eating, there was more running around and playing. Clarissa opened her 'not gifts'. We kept up with the tradition of asking for donations to a local animal shelter. They did not disappointed. We took a of photo of Clarissa and all the donations before they were picked up. The shelter asked for a back story. They then posted it on their website and said the sweetest thing on their facebook page.

In addition to the slime full of mix-ins the girls took home. We also made littler mermaid pouch goody bags. They had a mermaid tail key chain (poking out), some mermaid ponytail holders, and some of the Hershey kisses with mermaid stickers. Mason complemented me that it look like a mermaid was diving into the pouch....why yes, totally planned it that way. I love seeing the girls wearing them on their wrists (aka like a mermaid would) before they left. We had a couple extras and the pouch is perfect size for ear buds/charging cables. 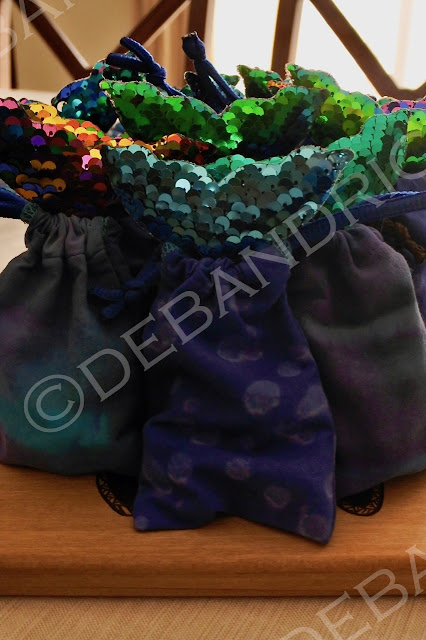 And that is how Clarissa celebrated her 9th birthday. Of course there was the cookie cake in her class room 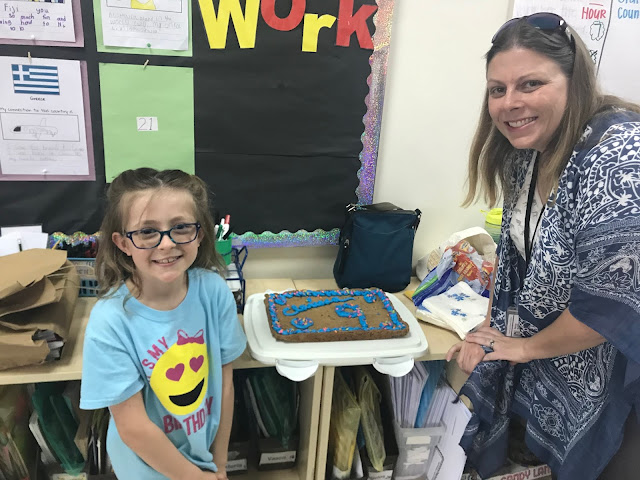 and an Oreo ice cream cake on her actual birthday with just the family and her besties in the neighborhood (disregard the mountain of dishes in the sink....someone requested Taco Night with homemade tortillas for dinner!). 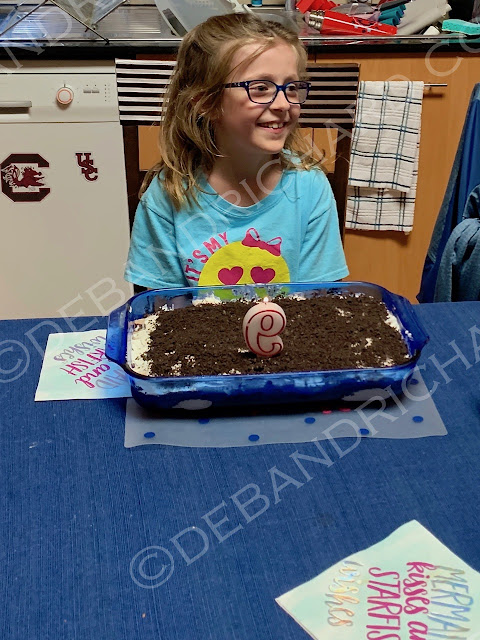 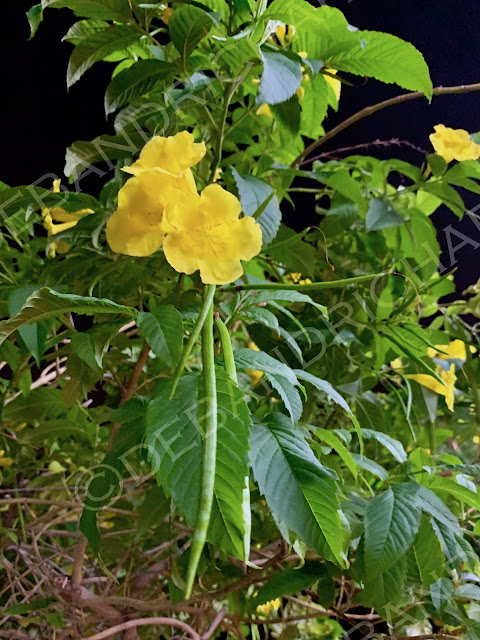 Monday's Moment: Message in the Sand 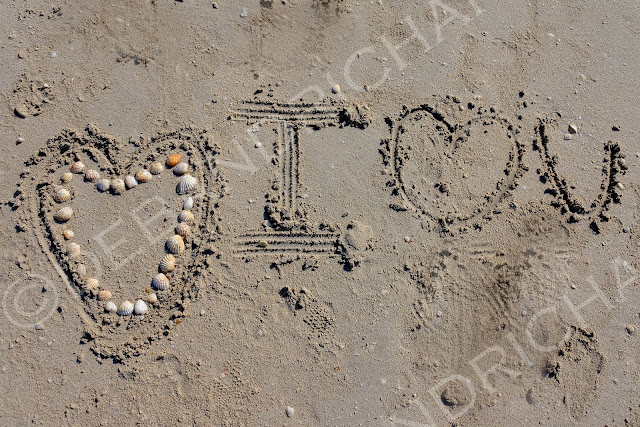 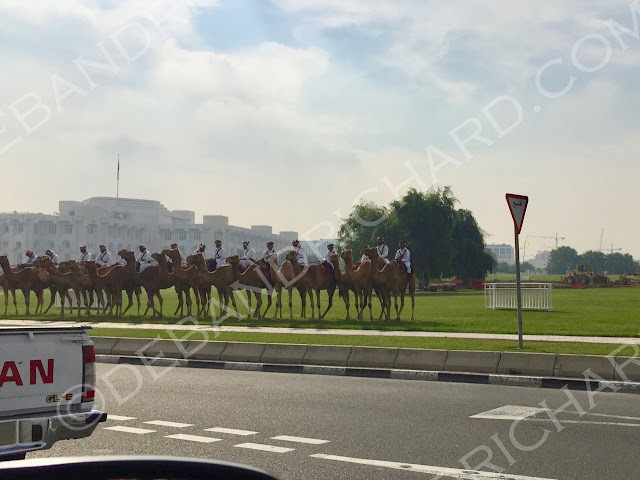 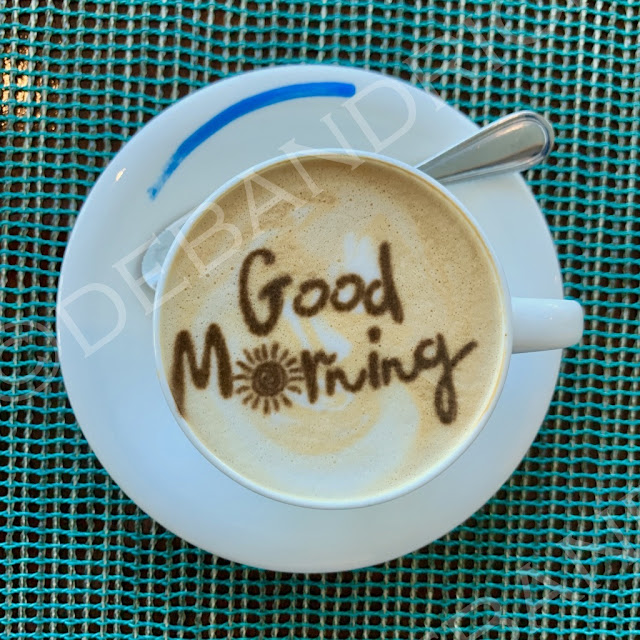