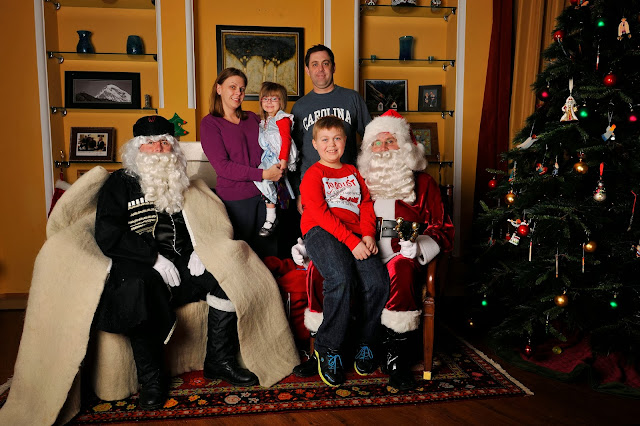 Tovlis Papa (or თოვლის პაპა in Georgian) is Snow Grandfather, a Christian gift-bringing figure in the Caucascus area of Europe (well according to wikipedia.....) and you know who Santa and we are......

Christmas has come and gone in our household....but the country of Georgia celebrates the orthodox Christmas on Jan 7.....so it's the holiday season that doesn't end......well at least not until next year. It was quite surreal to run to the grocery store on Christmas day and everything was open and like any other day....

I will try and resist de-Christmasfying the house until at least the Georgian Christmas (that should allow some late straggling gifts that have been sent to arrive and be opened around the tree as well), but it will be tough given I've taken the tree down on the 25th before...lol. Now if only some our belongings (such as the UAB shipped 3 1/2 weeks ago....meant to take 2-3 weeks) will arrive and it will feel just like Christmas being reunited with our belongings.....the joys of this new adventure.

After what seemed like a series of flights that would never end (adding to the fun getting very little sleep on the flights) we have finally made it to Tbilisi.  We left a week ago last Sunday. Tbilisi doesn't have many flights, the primary way of traveling here is via Munich. However, if you go that way you get the joy of spending somewhere between 9-13 hours in the airport since the Lufthansa flight in to Tbilisi doesn't leave until after 9pm Munich time (and gets in to Tbilisi after 4am!). However, the great people at the State travel office found a flight on KLM/Delta that would only give us a 3 hour layover in Amsterdam! The rub is we would have to leave on a Sunday since Georgian Airways (our connecting flight to Tbilisi) had only 2 flights a week between Amsterdam and Tbilisi - Friday and Monday. So we opted to leave early and depart on a Sunday....

Well just over a week ago, a winter storm descended on the Northeast and snow and ice started to fall in Washington DC. We kept an eye out to see if our flight would be delayed, but we lucked out and it wasn't (whereas quite a few other flights that day, and then later that week quite a few of my classmates who were departing to their respective post got delayed due to the storm). Deb's dad picked us up from the Oakwoods and took us to Dulles. We had to get a cab to take some of our luggage and Mason rode with me in the cab. We had a total of close to 13 pieces of luggage, which made for an interesting check in....

We arrived at Dulles. We were dropped off at the Delta entrance but then had to ferry all our luggage to check in with KLM. We knew we were over our "free" allotment of luggage and were going to have to pay for the extra pieces (State authorizes 2 pieces of luggage per person, so we should get reimbursed for the 1 extra piece per person). However, we still had to pay for it all. The lady with KLM started to argue with me about our amount of luggage and I wasn't sure if she was trying to talk me out of taking them?! I finally had to say "look, I'm going on a two year work assignment. Unless you are going to ship them for free I have to take this luggage and I'm fine paying with it!". Total tab before reimbursement, $975!

Since we had some time to blow before our flight, Deb and I had some free United lounge passes we decided to use. It was nice to get some snacks and drinks and charge up our various iDevices before boarding the plane. Soon enough, it was time to board the flight. We knew our flight was going to be full, and since we had 2 carry on bags per person, the KLM gate agent gate-checked some of our bags free of charge. We did have one casualty as a result - we had Deb's laptop in one of the bags (outside pocket) and now the lcd panel no longer works, probably as a result of getting thrown around by the luggage handlers. The employee checking our bags told the kids there would a surprise onboard, which prompted Mason to ask the first flight attendant he saw on the plane for it (which she had no clue what he was asking for). Once the doors were shut and the plane was being prepped for departure, the flight attendants did come by with a little goody bag for the kids. It was a drawstring bag with a finger puppet, some colored pencils and activity pages (trip passport/diary type thing). Due to the previously mentioned weather, departure took a little longer than usual as the plane needed to be de-iced.

The KLM flight was relatively uneventful. We all enjoyed watching the flight tracker. After we ate, Deb tried getting Clarissa to get some sleep and made a pallet for her on the floor. Just as Clarissa fell asleep the flight attendant came by and told Deb that Clarissa couldn't sleep on the floor. Getting picked up woke Clarissa up and caused her to have a complete meltdown, crying kicking and screaming. I decided to switch places with Deb and let Clarissa sleep on my lap - Deb was at her wits end, mad at the flight attendant for causing her to wake up Clarissa, tired and unable to do anything to calm Clarissa down. Clarissa fell asleep in my lap, and Deb got some dozing (along with Mason, who had made Deb his bed). Oh, personally I got a little ticked at the lady sitting in front of Mason. As soon as we were airborne she reclined her seat fully right in to Mason's lap. Then once we started our descent in to Amsterdam, she told the flight attendant she needed to sit in the front of the plane because she needed to be the first off or she'd miss her connection. So when she went up front, she kept her empty seat fully reclined (which the flight attendants didn't fix when they did their final walkthrough before landing).

We got in to Amsterdam. First stops were to grab some breakfast and brush the funk off our teeth. Schipol has a kids play area, so we let the kids run around there to burn off some energy before we caught our next flight. Interesting thing was you go through security again at each individual gate. Luckily we hadn't brought any food but the partially drank bottles of water had to be abandoned to get on the plane.

Our next leg was on Georgian Airways - which was interesting to say the least. The plane wasn't even 1/4 of the way full, so Deb stayed with Clarissa and Mason and I had our own rows. Only one of the two bathrooms on the plane was in operation, and the working bathroom, appeared as though it got skipped on cleaning when the plane was turned around (time wasn't an issue, since the plane was parked and unloaded before we ever arrived). There were "liquids" on the floor, and they kept running out of toilet paper (I think the last hour or two there was none in it).

When they served "lunch" you really didn't have a choice. Mason and Deb had some pasta with a couple saucy meat like chunks to the side (even though vegetarian had been ordered), I had some couscous and a meat like substance. I ate it all because I was starving, I don't think Deb and Mason ate much of theirs. Clarissa and Deb fell asleep and slept most of the flight, Mason slept a good portion of it. I didn't get any sleep. After a 4-5 hour flight we prepared for landing in to Tbilisi. We came in over the snow covered mountains and landed in our new home.

Some embassy staff and my office sponsor met us at the airport and helped us through Customs. Georgia takes a digital photo of everyone who comes through, and Clarissa decided she didn't want her photo taken. We finally got through customs and claimed all of our bags. We had checked Clarissa's car seat and put it in the car (Embassy staff won't drive a child who is not in their car seat). Clarissa decided she didn't want to be in the car seat and proceeded to have meltdown #2. We finally got her buckled in and started to make our way to our new home. Which will be a post of its own!
Posted by Richard at 11:29 AM No comments: