Monday's Moment: Survived another a year of elf mischief 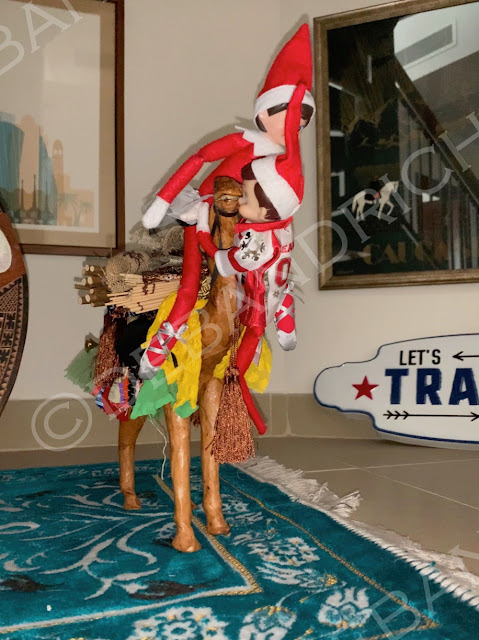 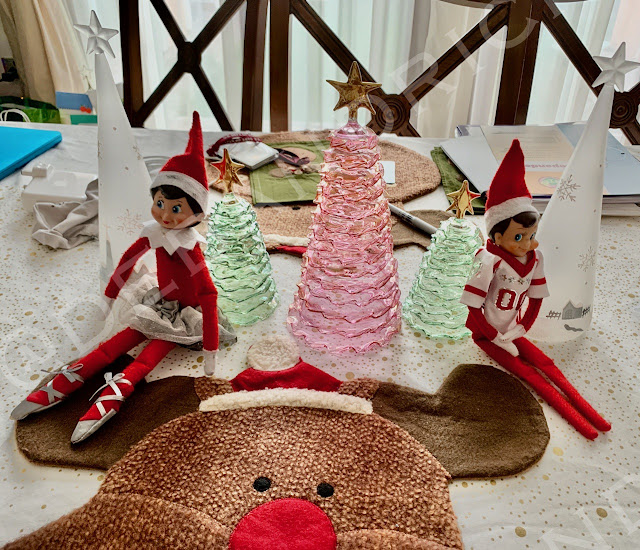 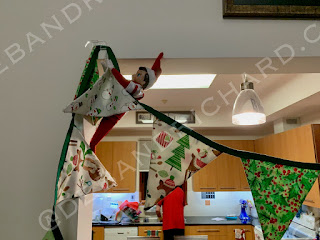 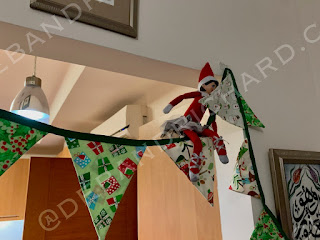 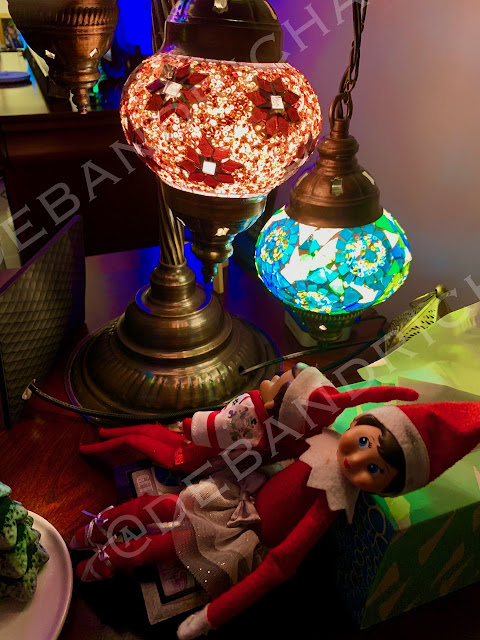 So as it was for everyone else, Halloween + social distancing for 2020 = strange year....the kids were able to dress up for school (they are on an A/B day type schedule). Clarissa went as a dark angel and the teen went as a fave character from 'The Big Lebowski'. The teen was able to incorporate the mask into the costume, where as Clarissa said her ears couldn't handle a mask, headband, and glasses so would alternate two of three. So for school she only wore the headband for the class photo since the other two were required items..... 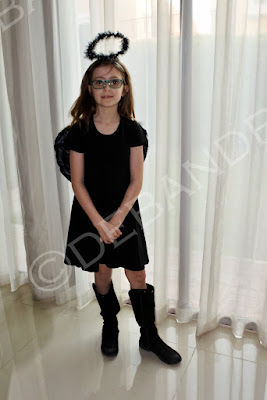 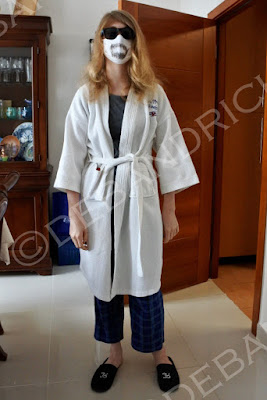 The CLO was unable plan/host the usual walk around and trick or treat in the different offices/sections at Richard's work....there are always bottlenecks and there would be no way to social distance. We did have a virtual coffee and brainstorm alternative ideas. There was a candy bar one afternoon, we went by and filled a bag up with a bottle of 'ghost tears', mini bags of popcorn, and all kinds of sweets (way too many pixy sticks if you want my opinion) your 10 year old heart desired....lol.
Then with it being the perfect year and Halloween falling on a weekend. CLO planned a scavenger hunt for families on Friday morning (the start of the weekend here). First I'll show the clues and then the photos we sent along the way proving we were there...lol. 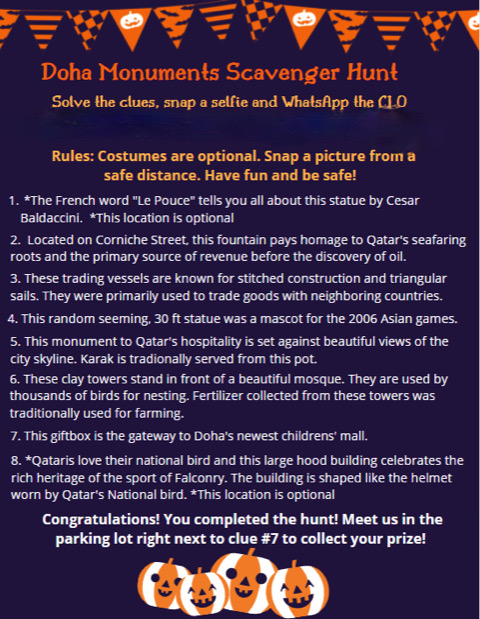 We skipped #1 - the Thumb statue in Souq Waqif (almost added a photo I've taken another time in here...lol), it's not in an easy park, hop out, snap a photo, and go place.
#2 -the Pearl fountain along the corniche (this might be the only photo with all four of us....I promise the teen was there.....even though you only see hair....). 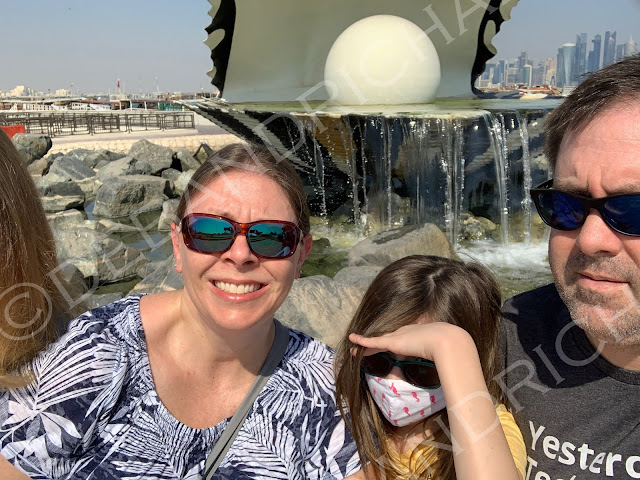 #3 - Dhow boats along the corniche (this one was a hard one....there may have a child knocking another child out of the picture while I was staring into the sun attempting to take the photo...but there are parts of a couple boats in the background there). 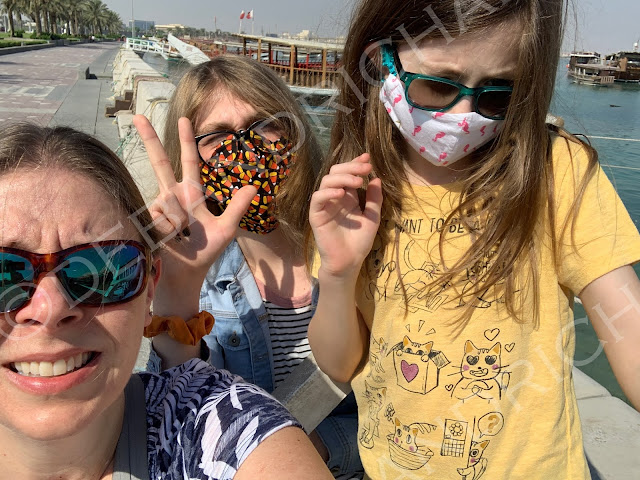 #4 - "Orry" the Qatari Oryx along the corniche (this one was funny, the photo function from my watch was still on even though I was in the car, so I actually took this from the car while Richard held my phone in selfie mode). 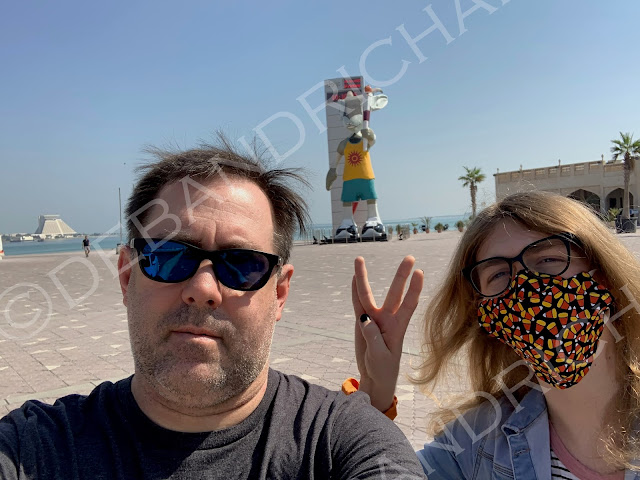 #5 - teapot sculpture along the corniche (I may (or may not) have egged some competitors on and called them cheaters for trying to just drive by and take a photo instead of getting out for the picture (this one had a parking lot)). 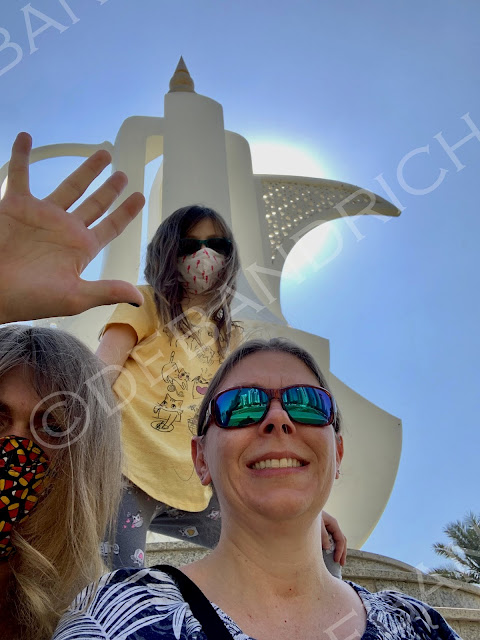 #6 - clay pigeon towers in Katara (Richard may have had some technical difficulties and the tween is laughing at her dad for being unable to do something so easy....) 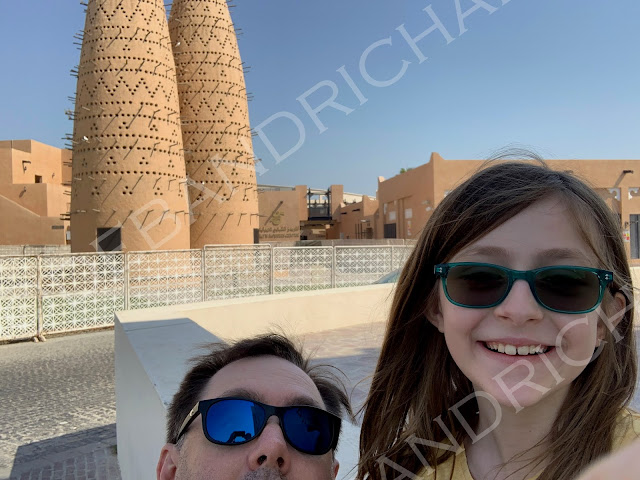 #7 - entrance to Children's Mall (the official end - somebody less than five feet tall was already digging into the prize bucket of goodies....lol). 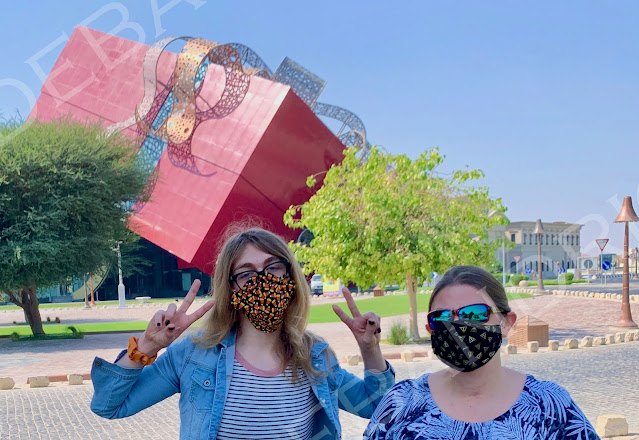 #8 - Giant falcon hood, which houses a falconry exhibit and veterinary clinic for falcons (since optional, totally cheated and took a car photo). 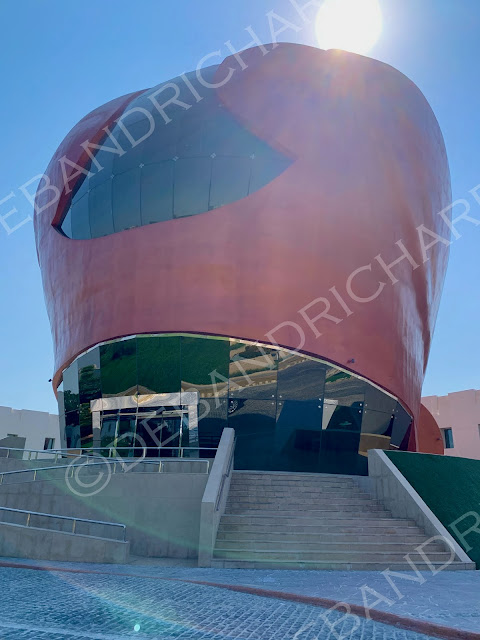 So obviously we drove as they sites were a good bit apart, but it was fun couple hours (which the kids did admit to after much protesting when mandatory fun rules were incited upon the start). 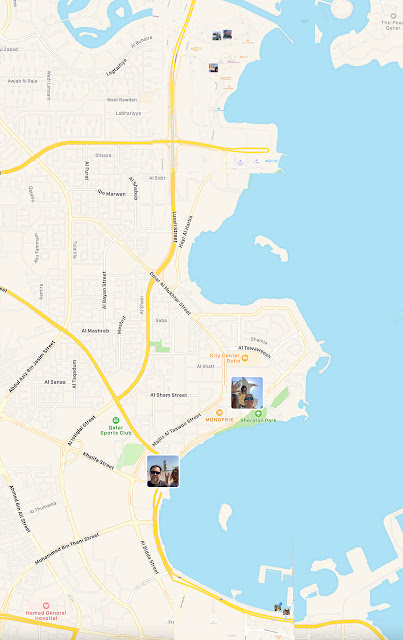 Clarissa has picked up a painting hobby during all the stay at home time this year. She's been using this website for inspiration/directions. She painted a Halloween painting and finished it two days before Halloween. 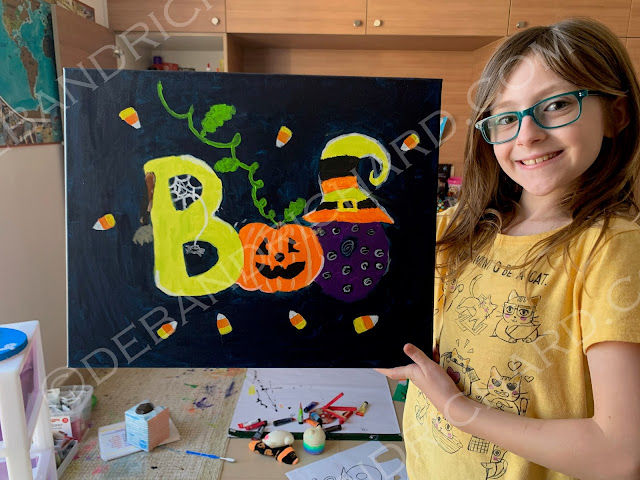 The compound we are on sent out a confusing message with CDC guidelines about trick or treating but ended it with a 'do what you want' line, so I ended up running to the store last minute and grabbing some candy. 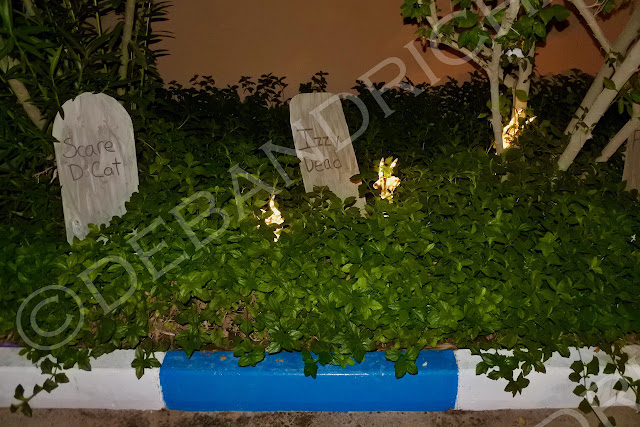 We put out the gravestones we made last year with some light up skeleton hands I had ordered online. They weren't 220V, so I knew we would have to use a transformer but I wasn't expecting the cord to be only about a foot long. So if you look closely, one of our mini transformers is in the hibiscus branches with an extension cord running into the house. We also had some battery operated (much easier!) projector lights that we scattered around. 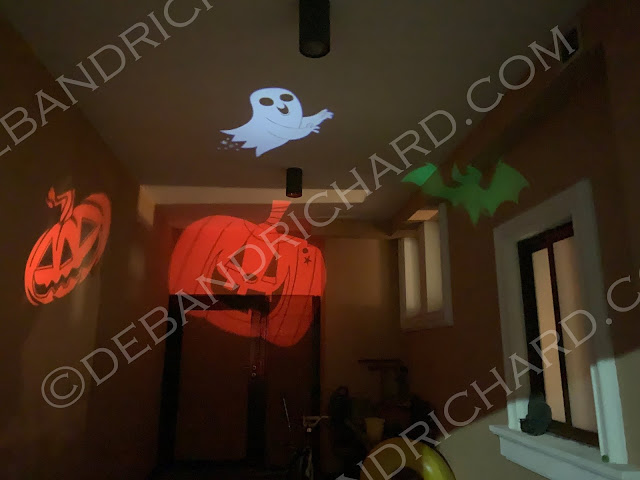 For trick or treating, we displayed Clarissa's painting outside. Richard and I sat outside and would put our masks on when kids walked up. We are on an outer road and hidden behind a bunch of trees so we weren't very busy (Richard walked around with Clarissa a bit when her friends were taking a while to get ready and said one street was super busy). The teen went off with some other teens and I did not see them. 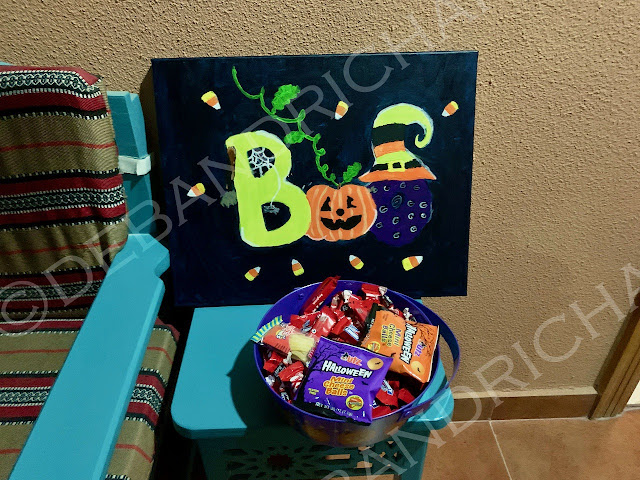 It was a very different Halloween this year and next year the kids will get to experience the fun of figuring out a costume that looks good with a thick warm coat in Germany....lol.
Posted by Deb at 1:51 PM No comments:

Email ThisBlogThis!Share to TwitterShare to FacebookShare to Pinterest
Labels: Halloween 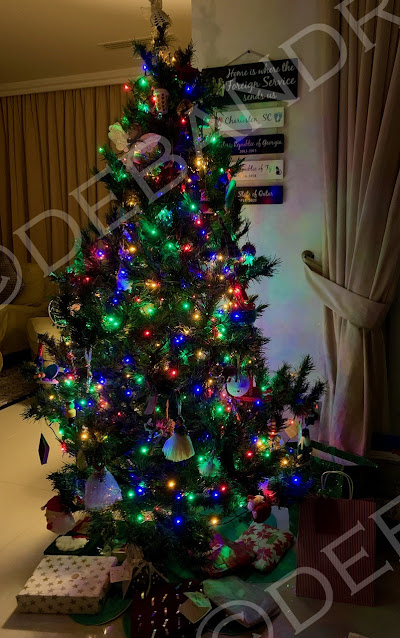 Email ThisBlogThis!Share to TwitterShare to FacebookShare to Pinterest
Labels: Christmas

Monday's Meowment: Cat in a Box 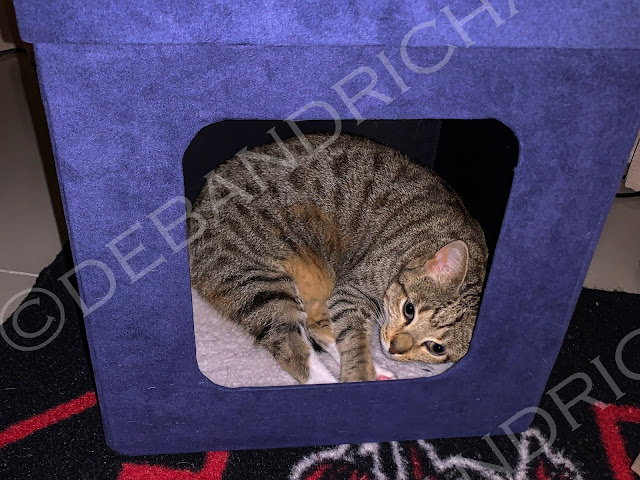 Email ThisBlogThis!Share to TwitterShare to FacebookShare to Pinterest
Labels: #IsaLeiMeow 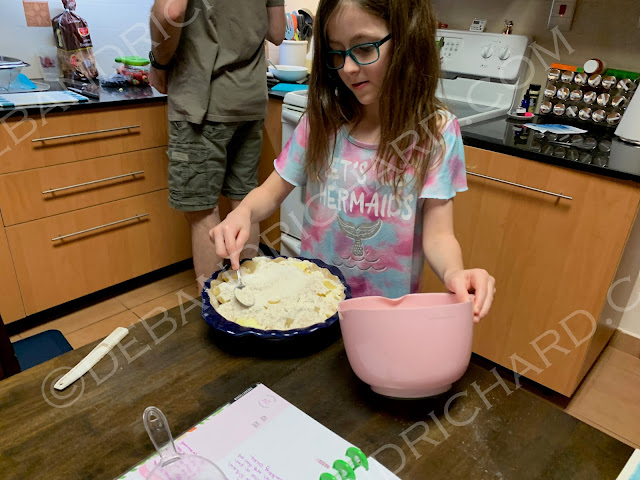 Recipe can be found here.
Posted by Deb at 4:30 AM No comments: