On Christmas Eve Eve, Richard took a vacation day and we took a trip out to Banana Island. Since Mason got to get away, we thought this would be a nice break for the rest of us from the hustle and bustle of city life. Banana Island Resort offers day trip packages (though someone is hinting for a Mother's Day weekend in the future). It's a small resort island about a 30 minute boat ride from Souq Waqif area, we caught an early boat out and a later boat back for a full day of fun. So while waiting to board we could admire the spiral mosque in the morning sun (or as some expats call it, the seashell mosque). 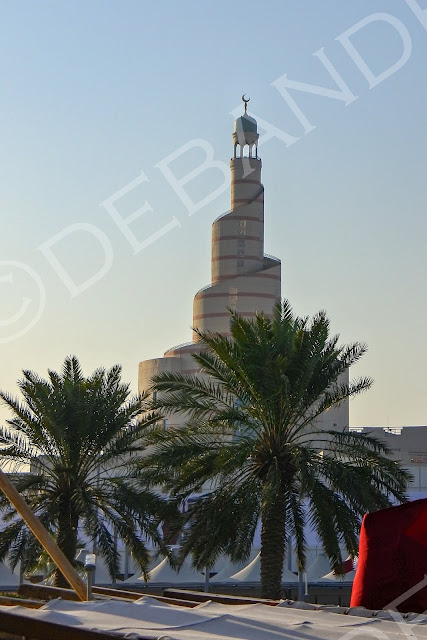 The weather was a bit chilly but we could admire the tropical island beauty, 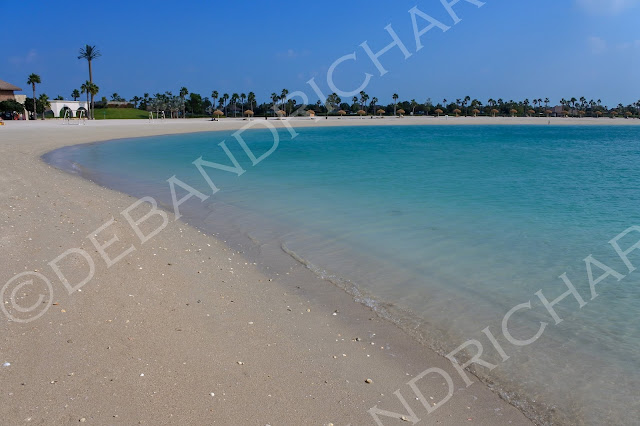 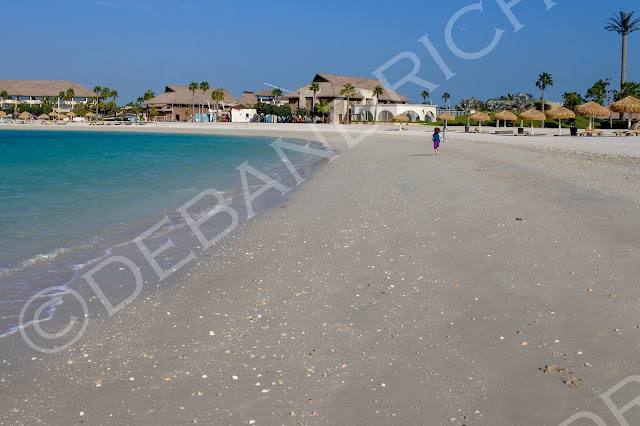 and hunt for shells. 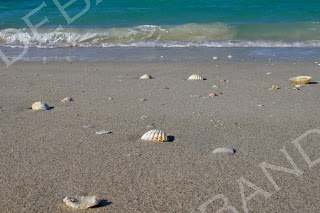 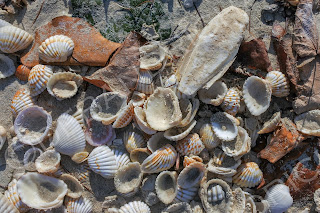 I found a couple awesome treasures! 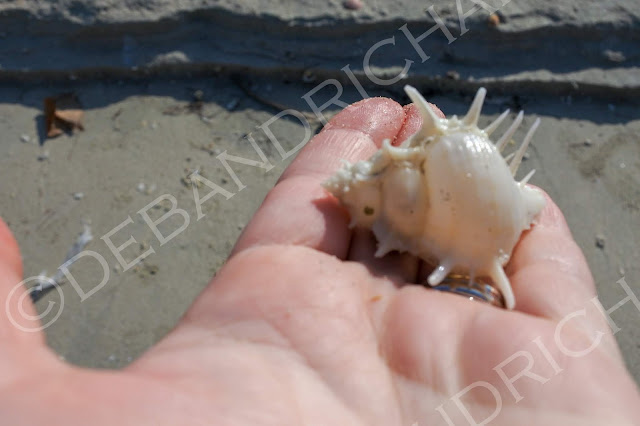 It may have been a tad windy that day. Don't mind my hair. 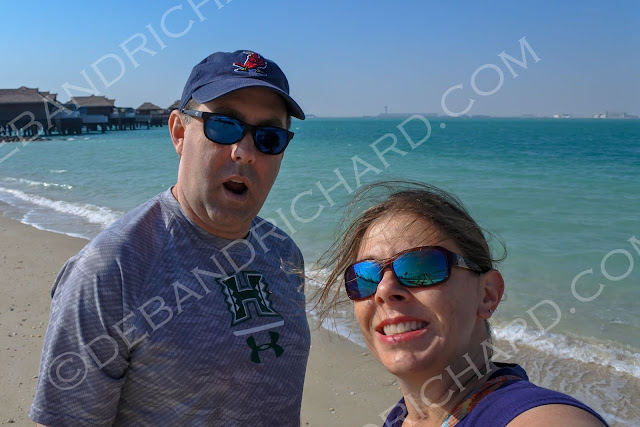 We had a late breakfast at one of their restaurants, just outside the restaurant there was a Reflexology Wading pool. What's that you ask? It is an Ancient Egyptian method to restore good health and balance to the body. Essentially you walk through water that has rocks/pebbles strategically placed to provide you a foot massage of sorts while wading. 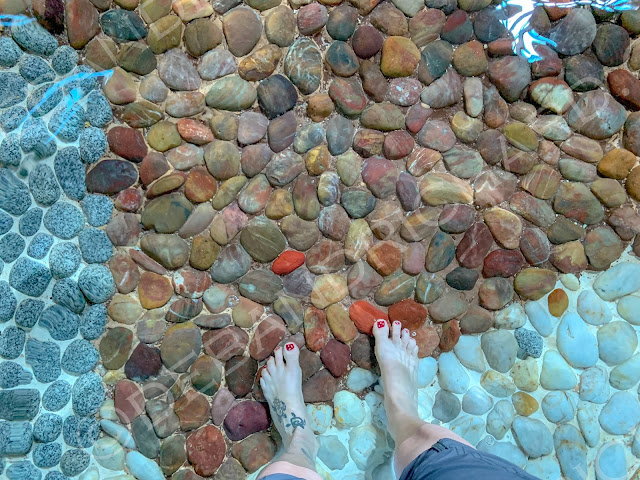 The rock placement was quite methodical as well, they were placed in patterns of different sea animals, such as a sea horse, dolphin, and sand dollar/sea star (some sort of echinoderm). You quickly learned which rocks felt good and which hit pain sensors! 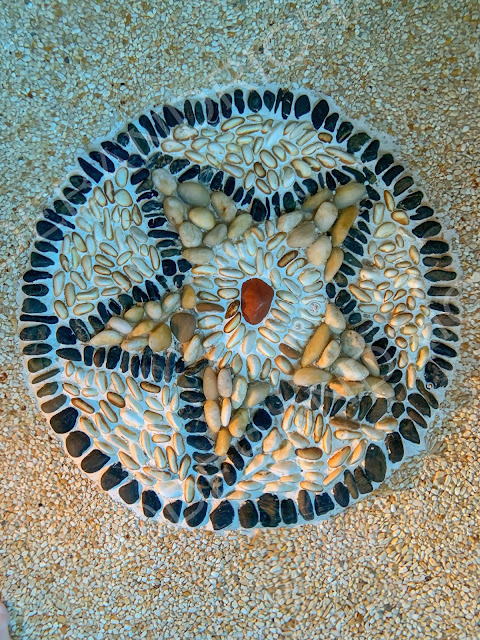 After lunch and wading, it had finally warmed up enough to allow swimsuit donning, sand castle building, and playing in the kids pool water slides! 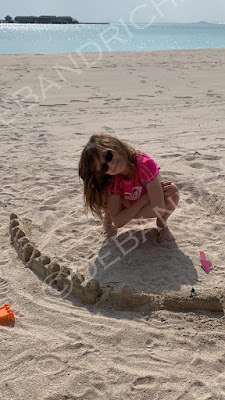 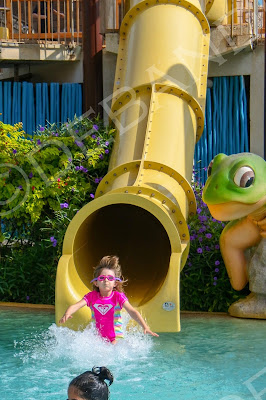 While some worked on channeling their inner mermaid, 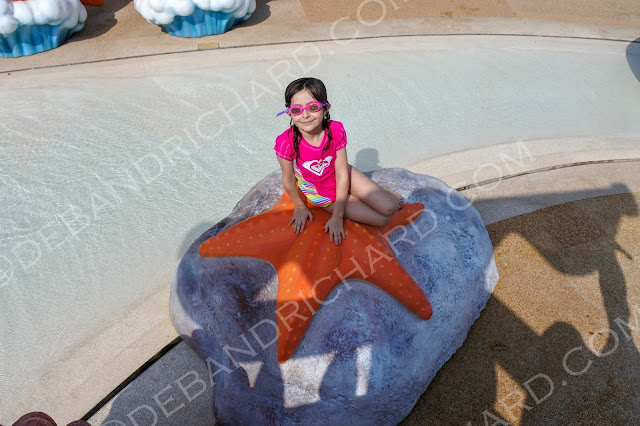 others used the downtime to catch up on some reading! 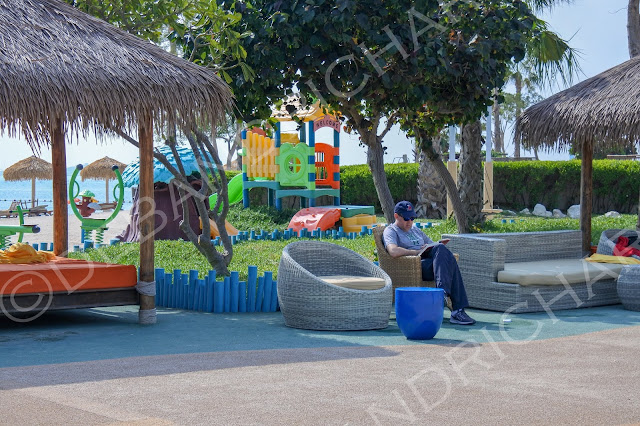 It was also now low tide, so we could take advantage of the water swing (the seat was underwater at high tide when we had arrived). 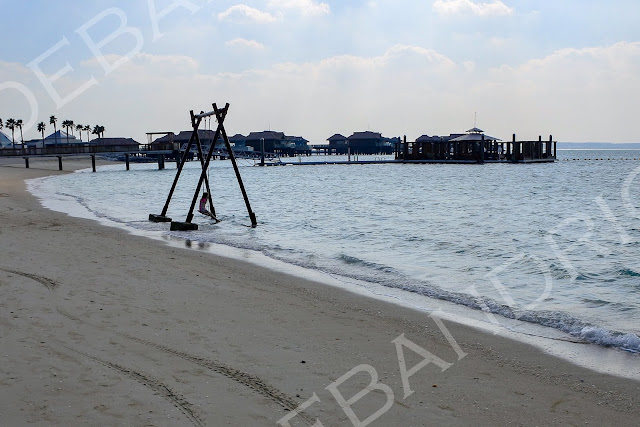 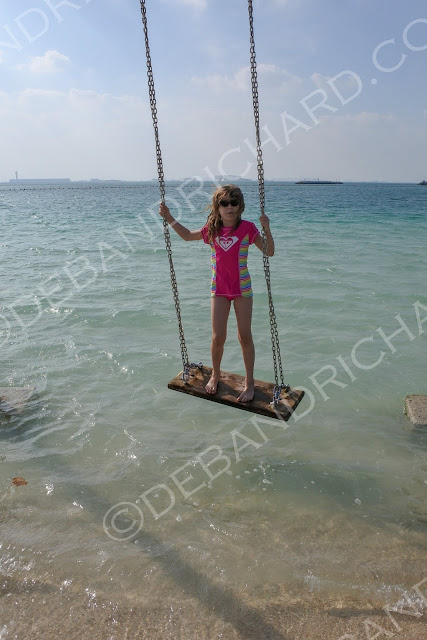 There were a handful of people on the boat we took over, we saw a huge school group arrive while we were on the beach, and we saw people here and there, but it was relatively quiet and secluded (guessing middle of winter isn't there high season). It started to make us miss Fiji. 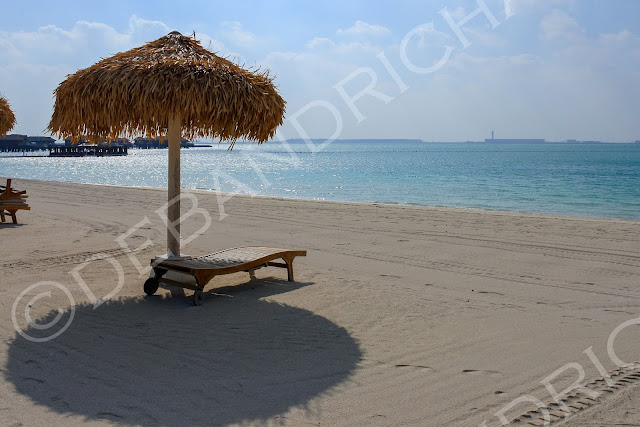 As the afternoon breeze started to pick up, we all started to get chilled (you know if Mr. Turn-the-AC-Down is cold, then it's cold). Luckily they had warm showers for those of us in swimsuits to get warmed up. We head to the American Diner for a late lunch and then to the bowling alley!! We had a super fun game of bowling. 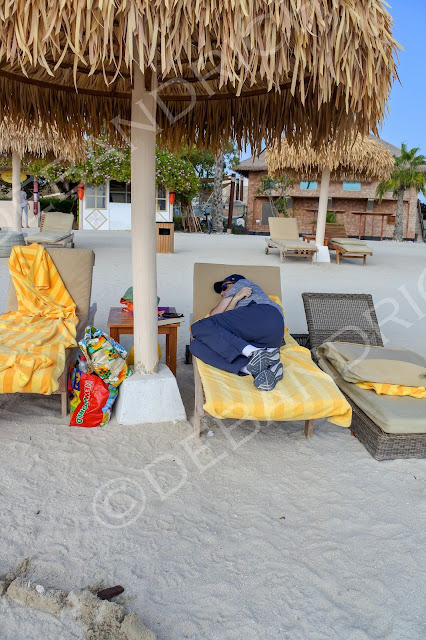 We walked along the path on the seaward side of the island. Near the main building, there we got this nice scenic shot! 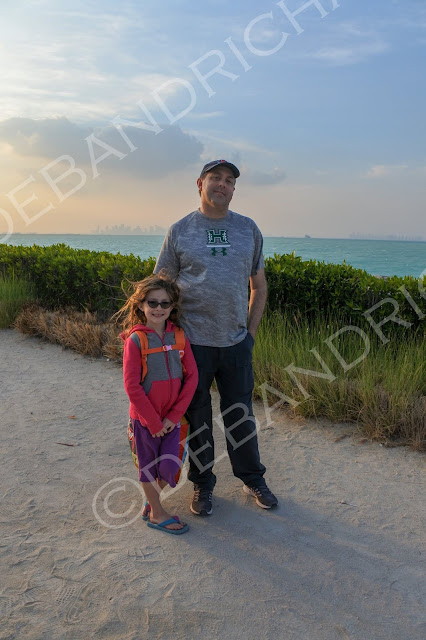 We were headed back to the front not to go to the playground again, but to decorate a Gingerbread House. There is a little coffee shop, that decorated the entrance like a giant gingerbread house. 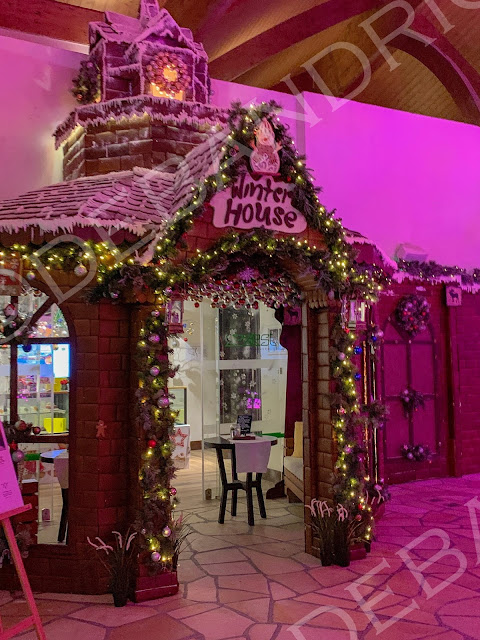 Once inside you could got a more manageably sized house of your own. 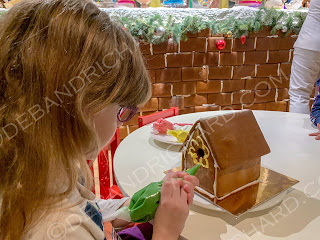 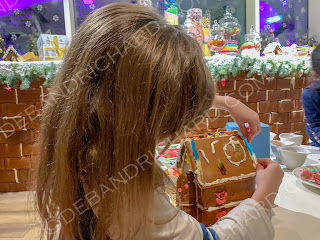 Clarissa was super excited and took the task quite seriously (sampling all construction material of course). 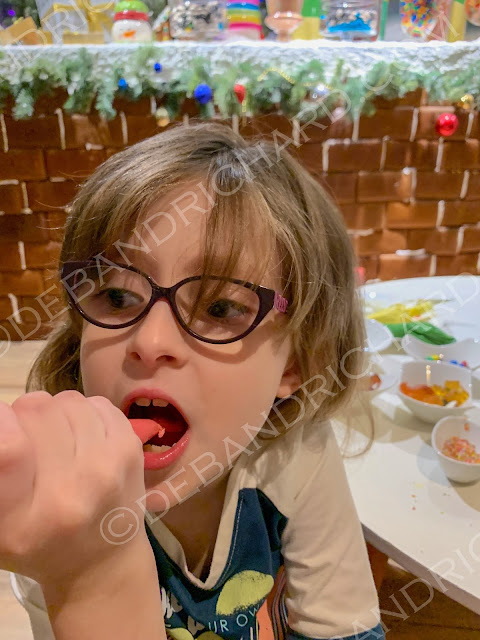 I snuck out to catch the end of our island adventure day's sunset. 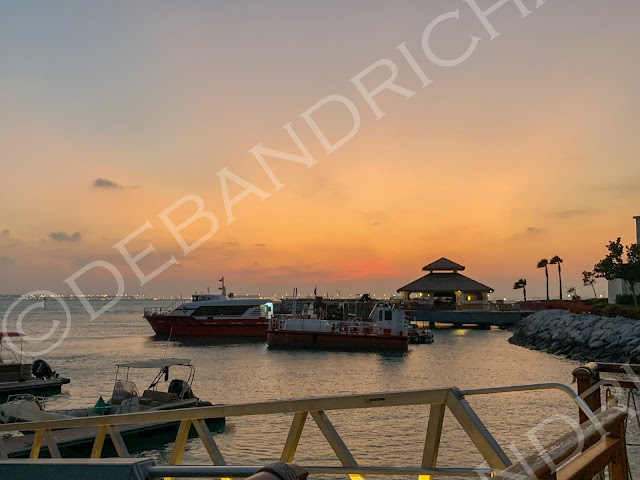 We then caught the ferry back to city. The Banana Island dock was nicely lit up. One of the most ingenious things they did was make a valet parking ticket with three parts. One went with our car/keys, when boarding the return ferry they tore off the second part (which they used to radio back with the number), so as soon as we got off the boat our car was already pulled up in front and ready to give the last ticket to the valet attendant and drive off! 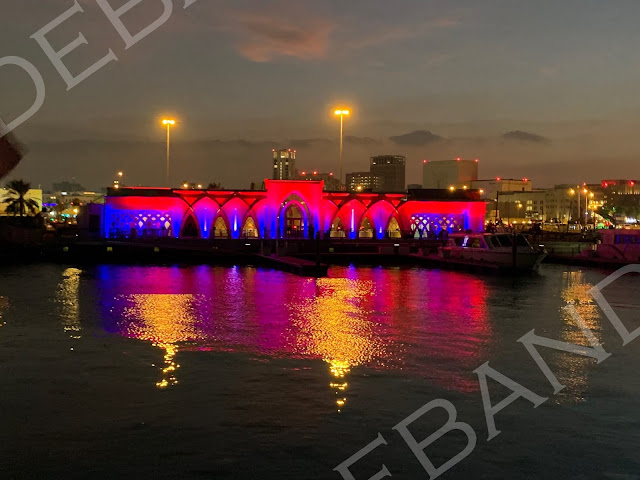 It was a fun day, it would be much more enjoyable if it was bit warmer. We did get some information about doing shore dives, so given it is the only place of its kind in Doha....we will likely be back (ahem, cough, Mother's Day weekend, hint, hint).
Posted by Deb at 4:30 AM