So there are a variety of types of Polish cuisine.  We were rather successful at eating most on our three days in Poland.....warning due to yummy food photos, you may become hungry after reading this blog post!

First stop....Zapiecek....known for its cozy atmosphere and pierogi kitchen! My grocery store 'Mrs. T pierogis' had failed me, I never knew there were more fillings that potato/cheese and meat.  These Polish dumplings were delicious. The dough melted in your mouth....yum yum yum, I want more. 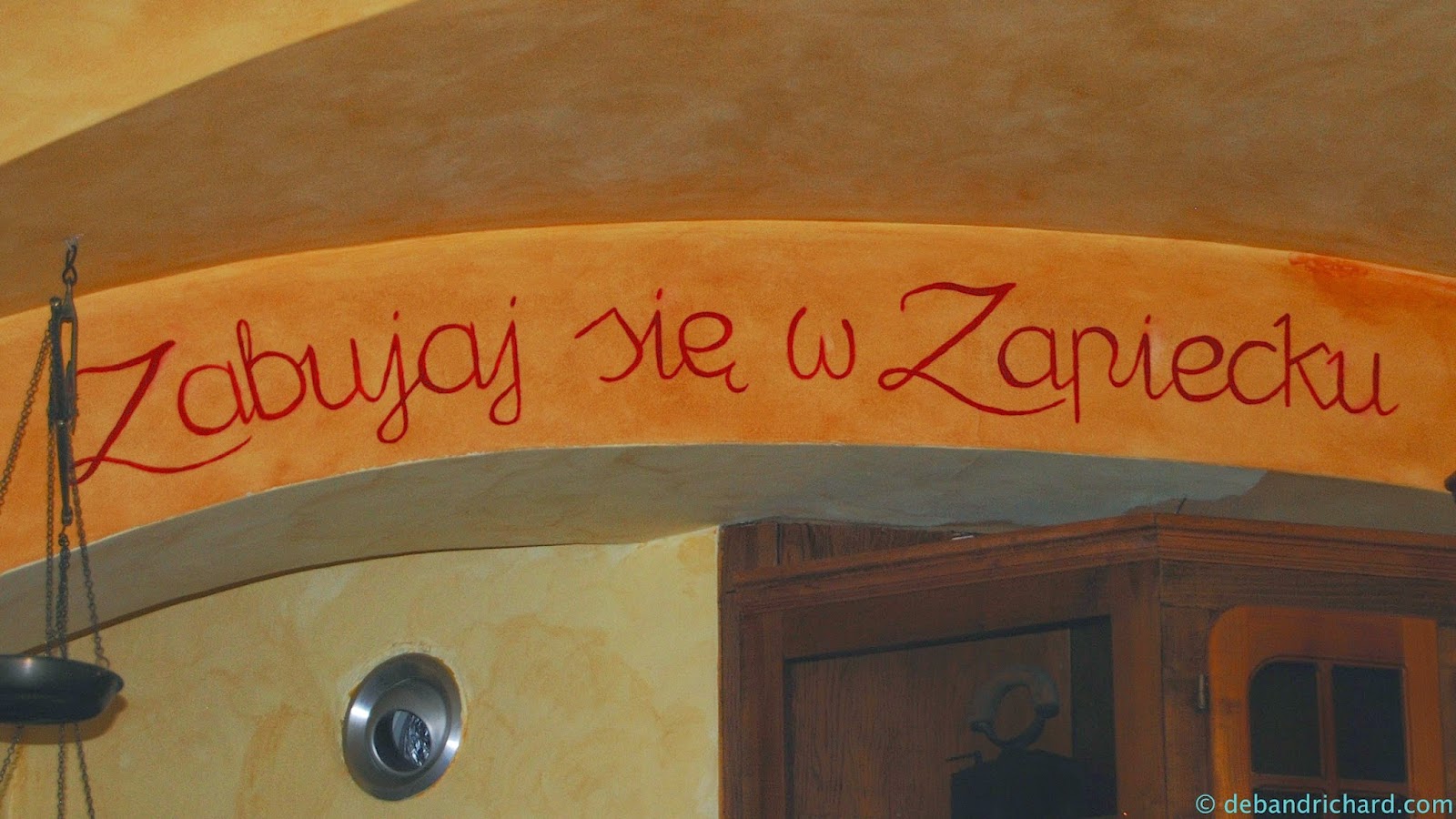 I had a variety of flavors (cheese, blueberry, strawberry, apples & cinnamon, and poppy seed & raisin). I chose the vanilla sauce. 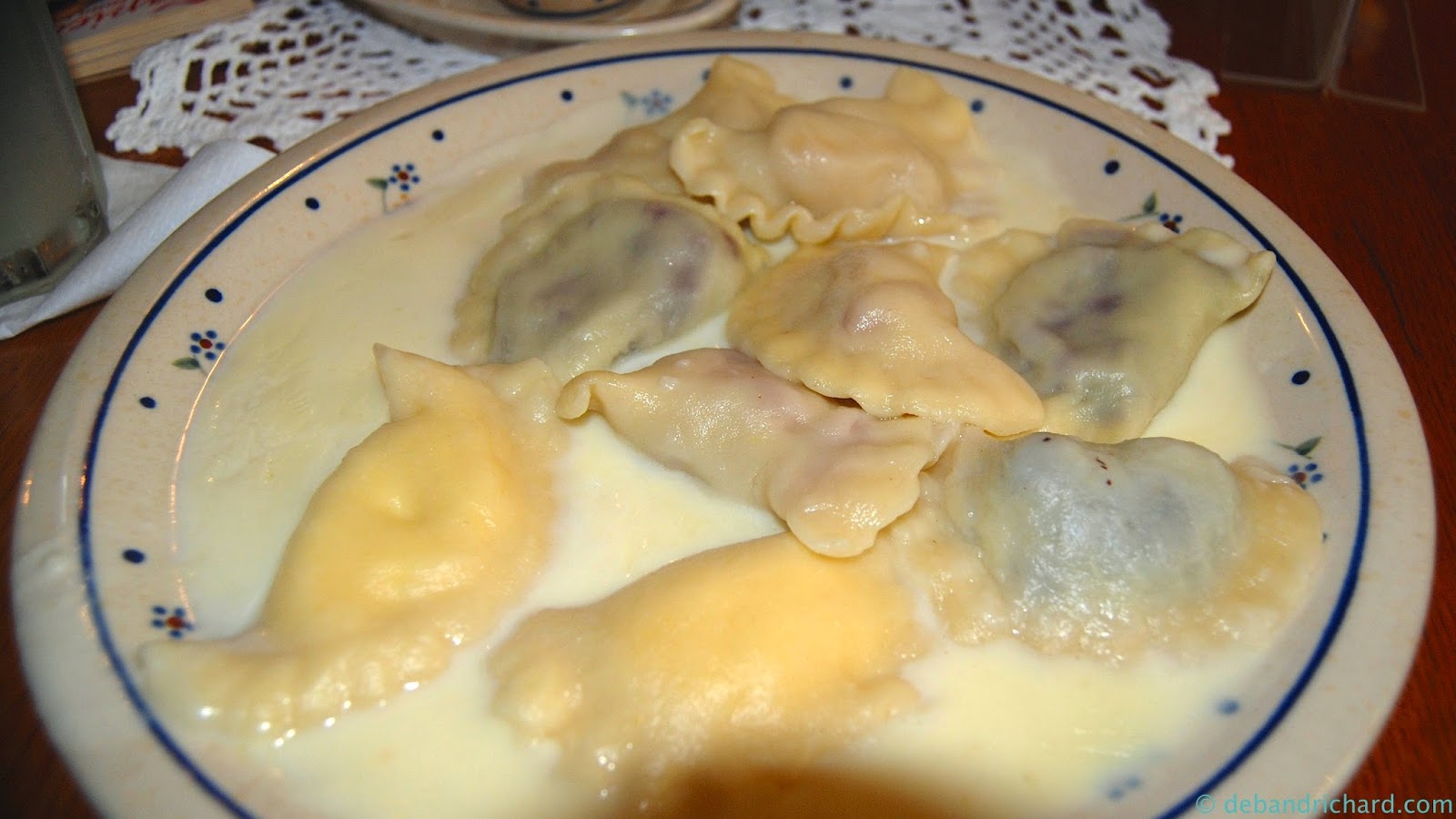 Dad had the meat filling, which came with a bacon sauce to pour on top. 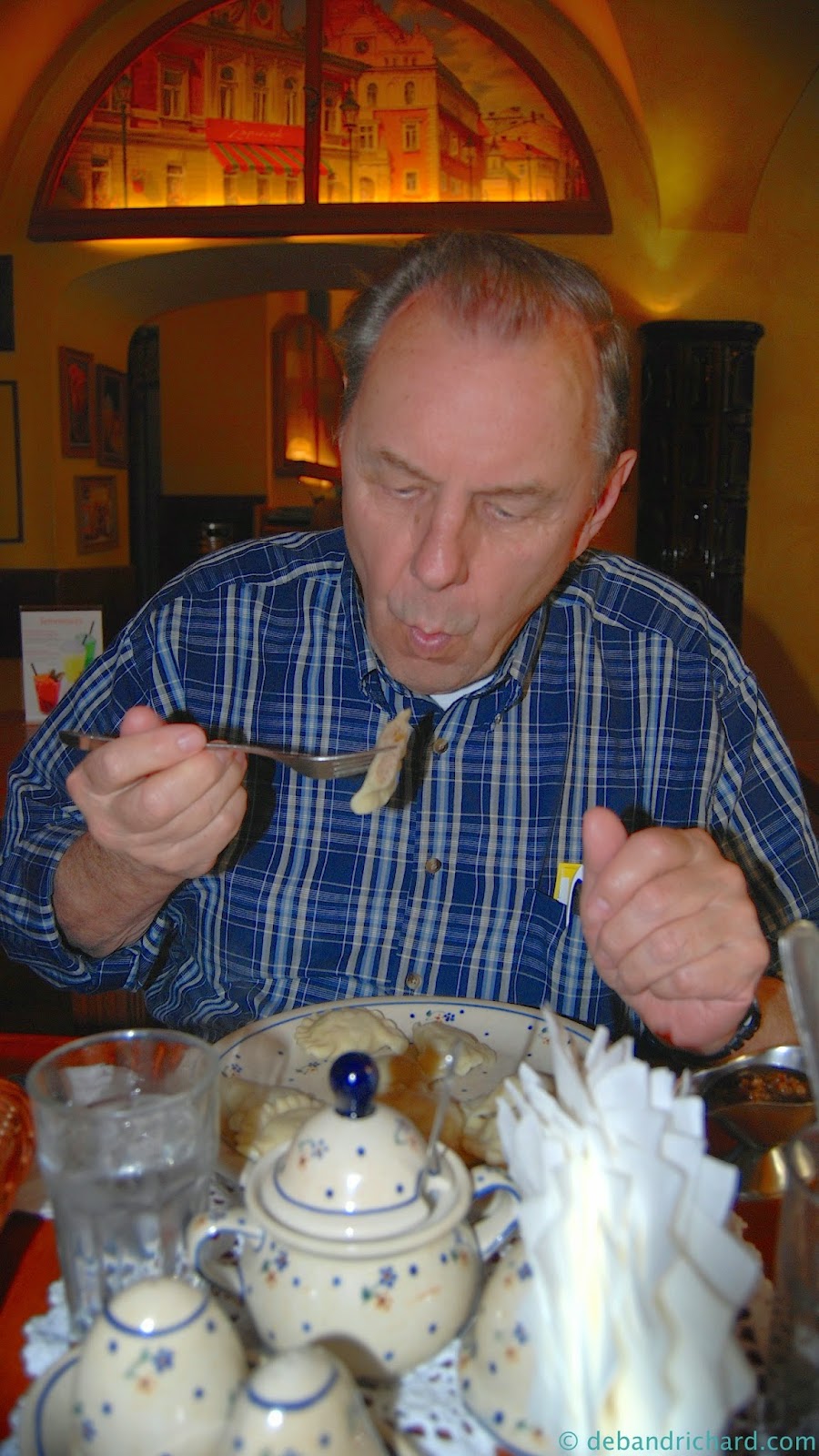 Next stop, Folk Gospoda, traditional country cuisine with a cottage like decor. I got the beer-battered sheep cheese with cranberry sauce. Dad got a roasted pork loin. We shared the bread with homemade garlic butter spread and steamed veggies.  I have to say that sheep cheese is definitely an acquired taste, very smokey flavored. 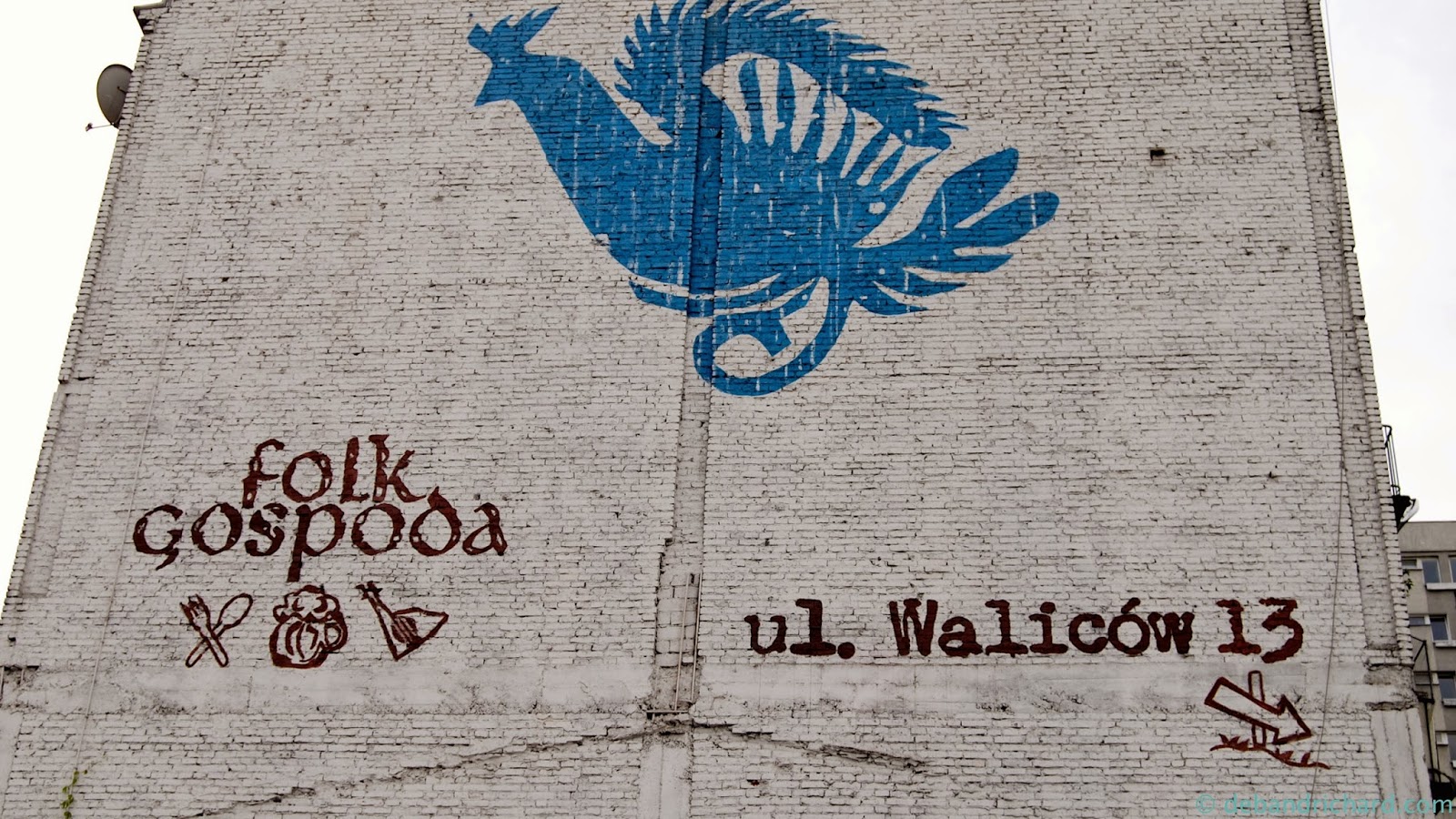 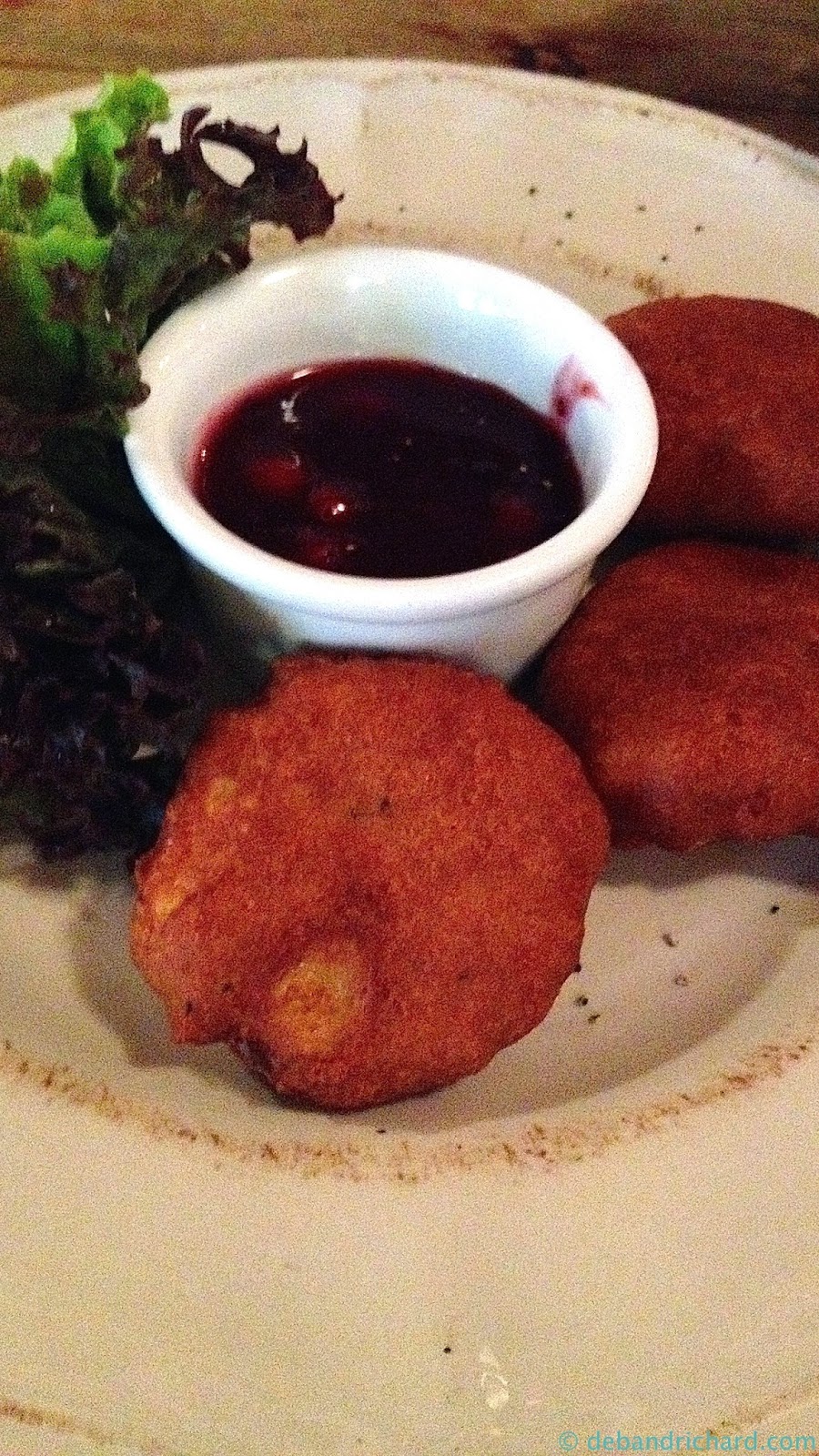 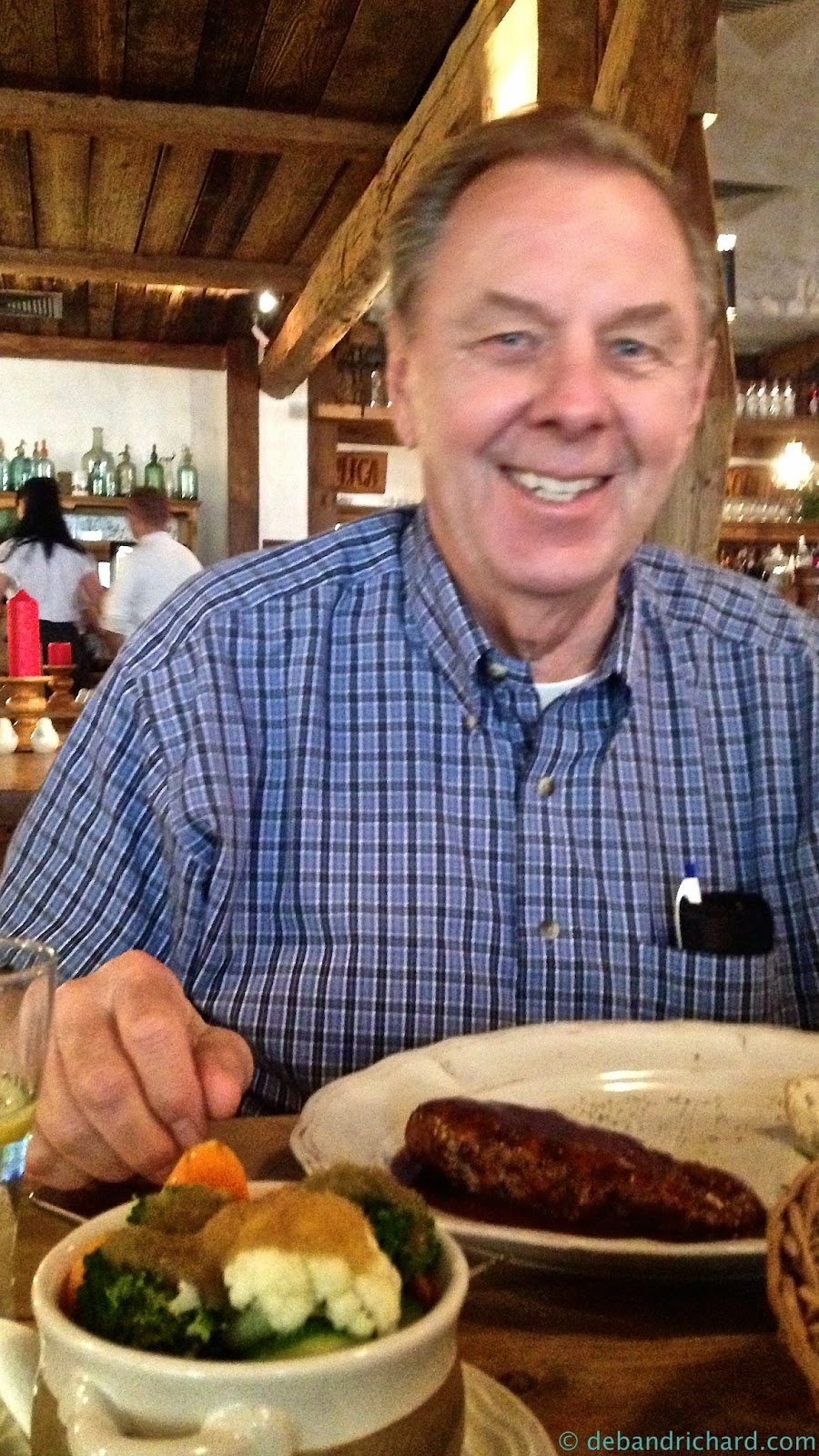 Next stop, Pijalnia Czekolady Wedel....essentially chocolate heaven from the Polish chocolates brand E. Wedel (which I now see sold everywhere).  We had dessert for dinner that night (hey, no kids with me, I did not have to set a good example). 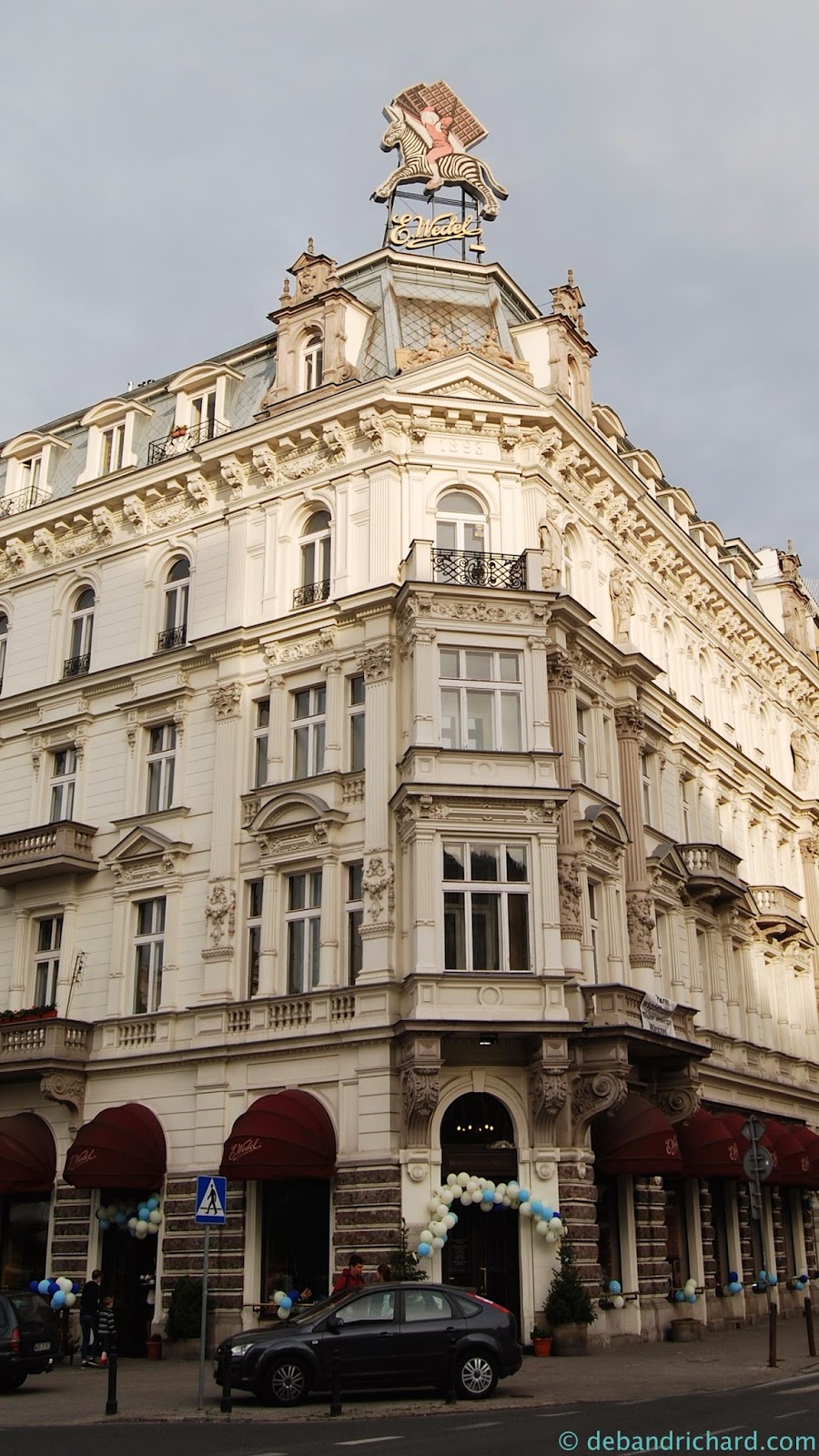 I order a cup of traditional drinking chocolate and a slice of 3-layer chocolate cake. YUM! 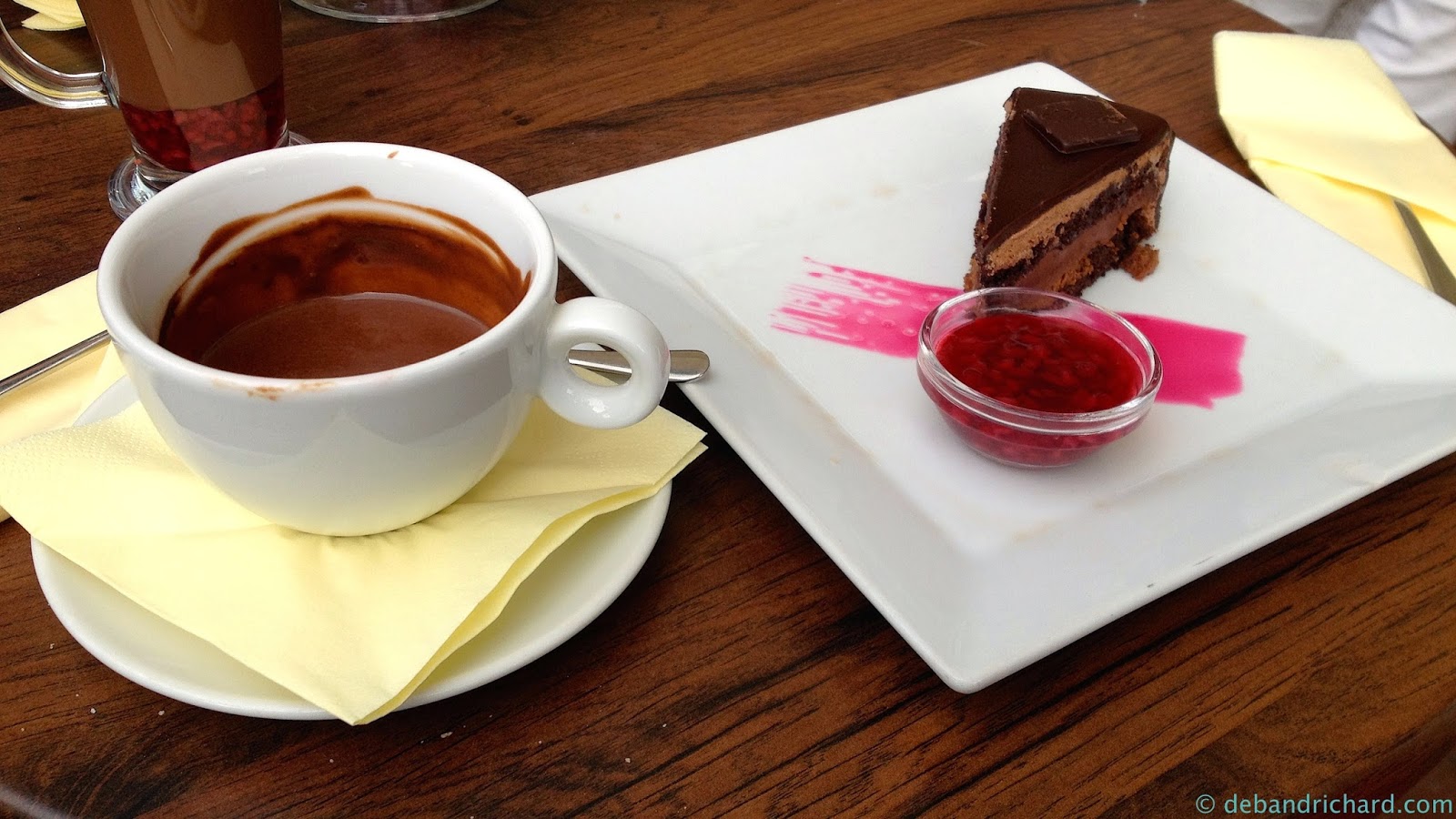 Per the waitress recommendation, Dad order a bitter drinking chocolate with raspberries and a raspberry sorbet (I feel she really likes raspberry flavored food, lol). 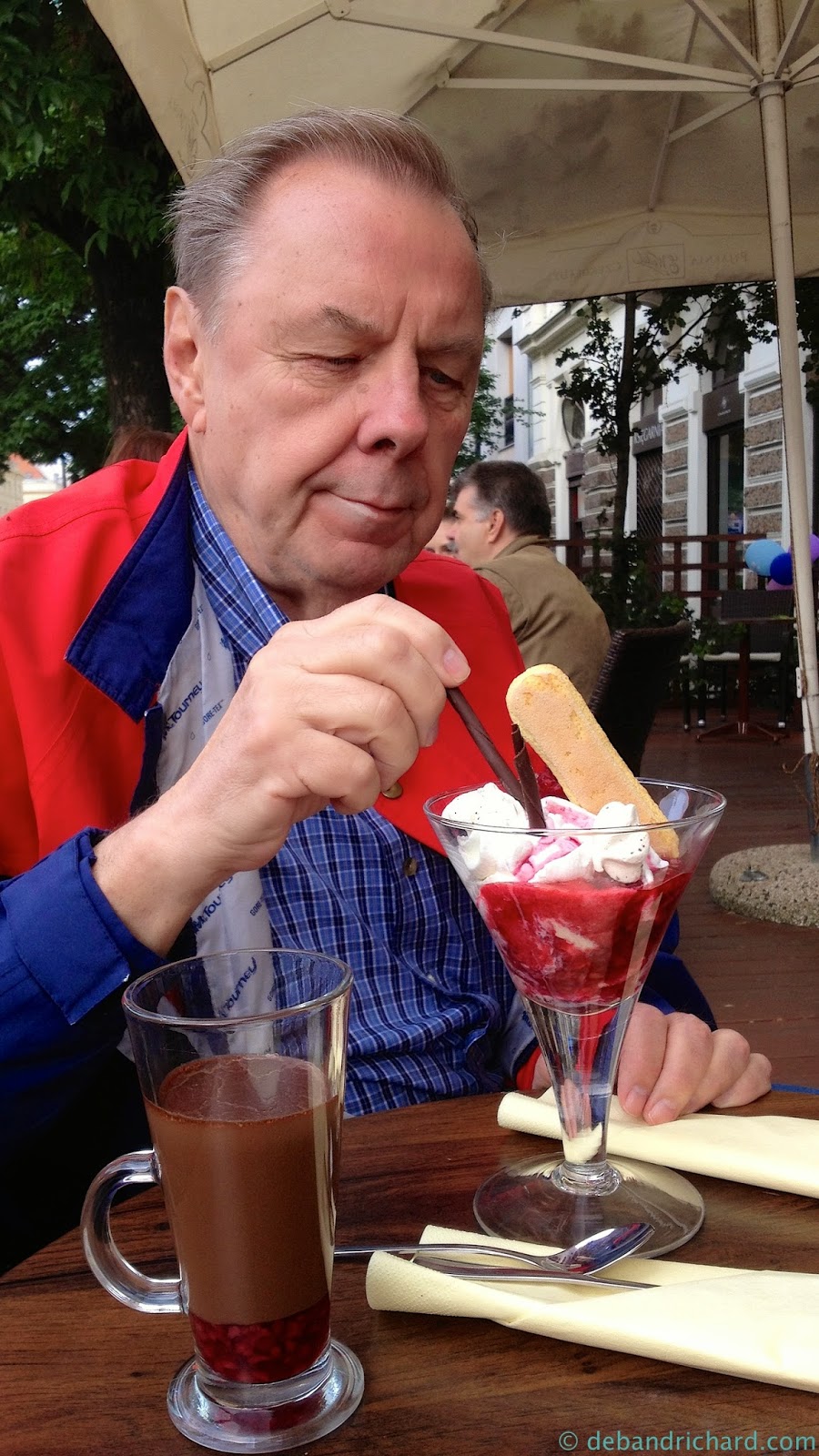 Afterwards, I was nice and picked up each kid a box of molding chocolates (it was a soft chocolate they could mold into different animals and then eat), as well as, a box of chocolates for Richard and I to share.

For our last breakfast stop, we hit a small local bakery that had been closed all weekend. The Gorąco Polecam bakery had a old time bakery picture on the window. Not sure if that was what was previously there or if it was the same company's original location image.

I got a tomato/mozzarella sandwich with a basil pesto.....can't go wrong with that. 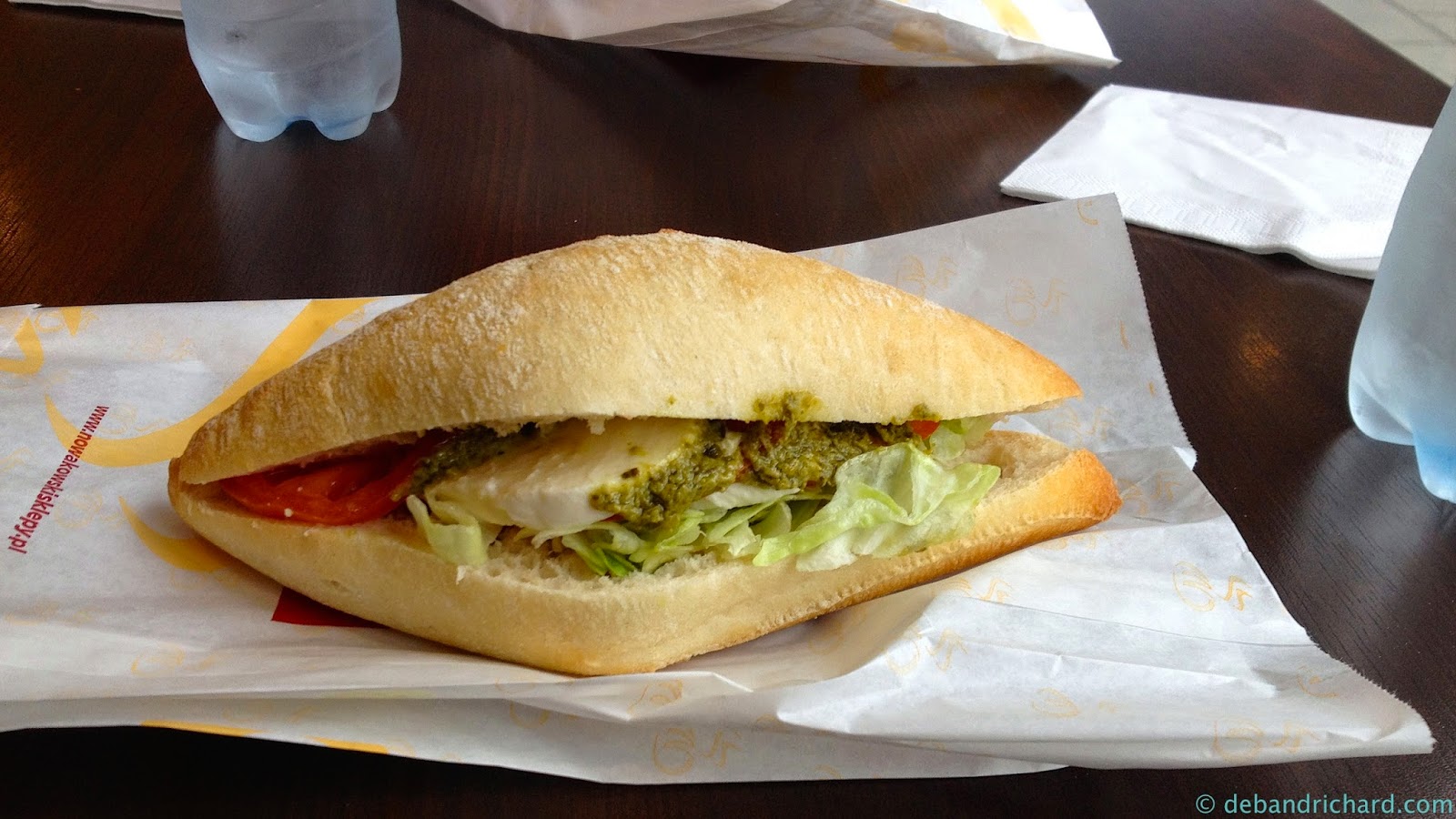 Dad got a paczki....a donut like pastry with a fruit filling. His grandmother used to make them with prunes (and you were extra lucky if you got a pit in yours!), so he was pleasantly surprised with the raspberry filling he got! Foreseeing another day of lots of walking, he also grabbed a bagel that he ate on our way to the bus station. He said it reminded him of his youth, after being an alter boy at mass he would stop and pick up a bagel to eat on his walk home! 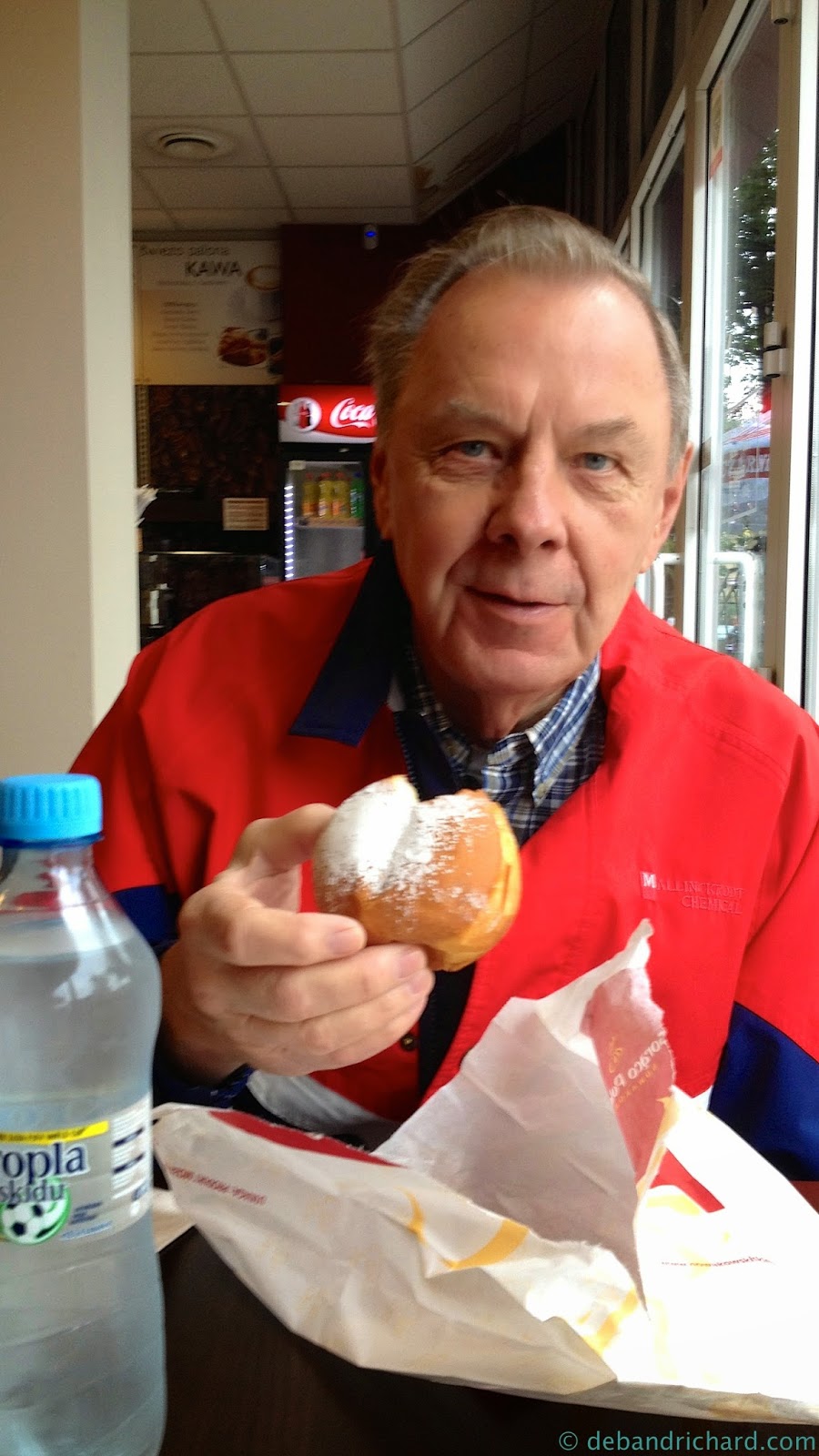 Final meal stop in the city of Warsaw, we hit a bar mleczny (a milk bar). A milk bar is essentially a cafeteria type restaurant and they tend to serve a lot of dishes with milk/cream. 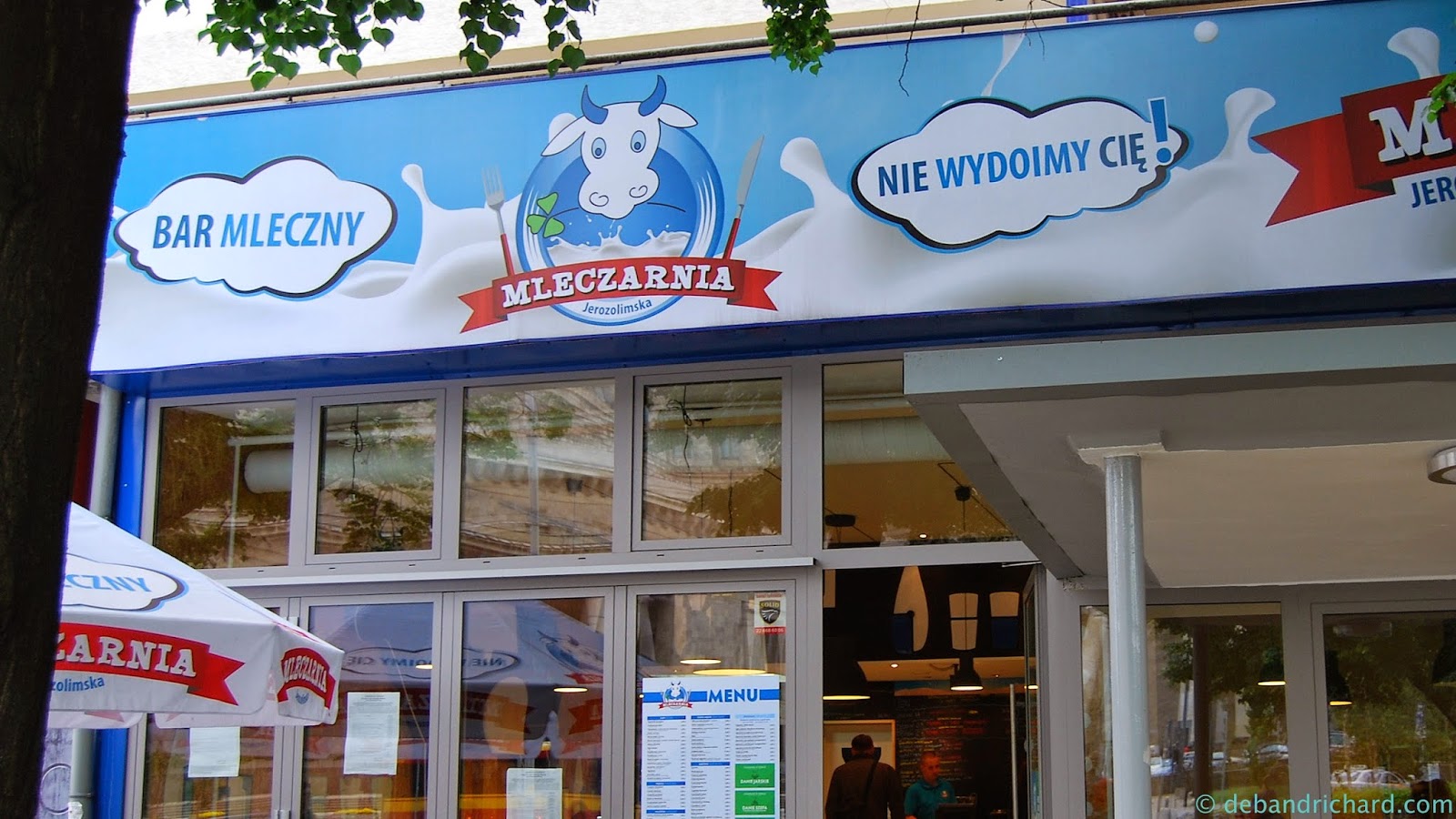 They had a menu in Polish and English outside on the window. When we went in to order it quickly became obvious tourists don't typically dine here. Their menu was written all in Polish on a chalkboard behind the counter. I ordered potato pancakes....easy enough. Dad tried to order their #1 from the menu on the window. She said that menu wasn't right, did he want the chicken, he said sure....so he got the chicken special for the day. His meal came with a bowl of vegetable soup, serving of rice, glass of cranberry juice, and some delicious chicken in a cream sauce. Mine was made to order...so by the time I took a picture (before eating the creamiest, most divine potato pancakes ever) Dad had finished his meal. 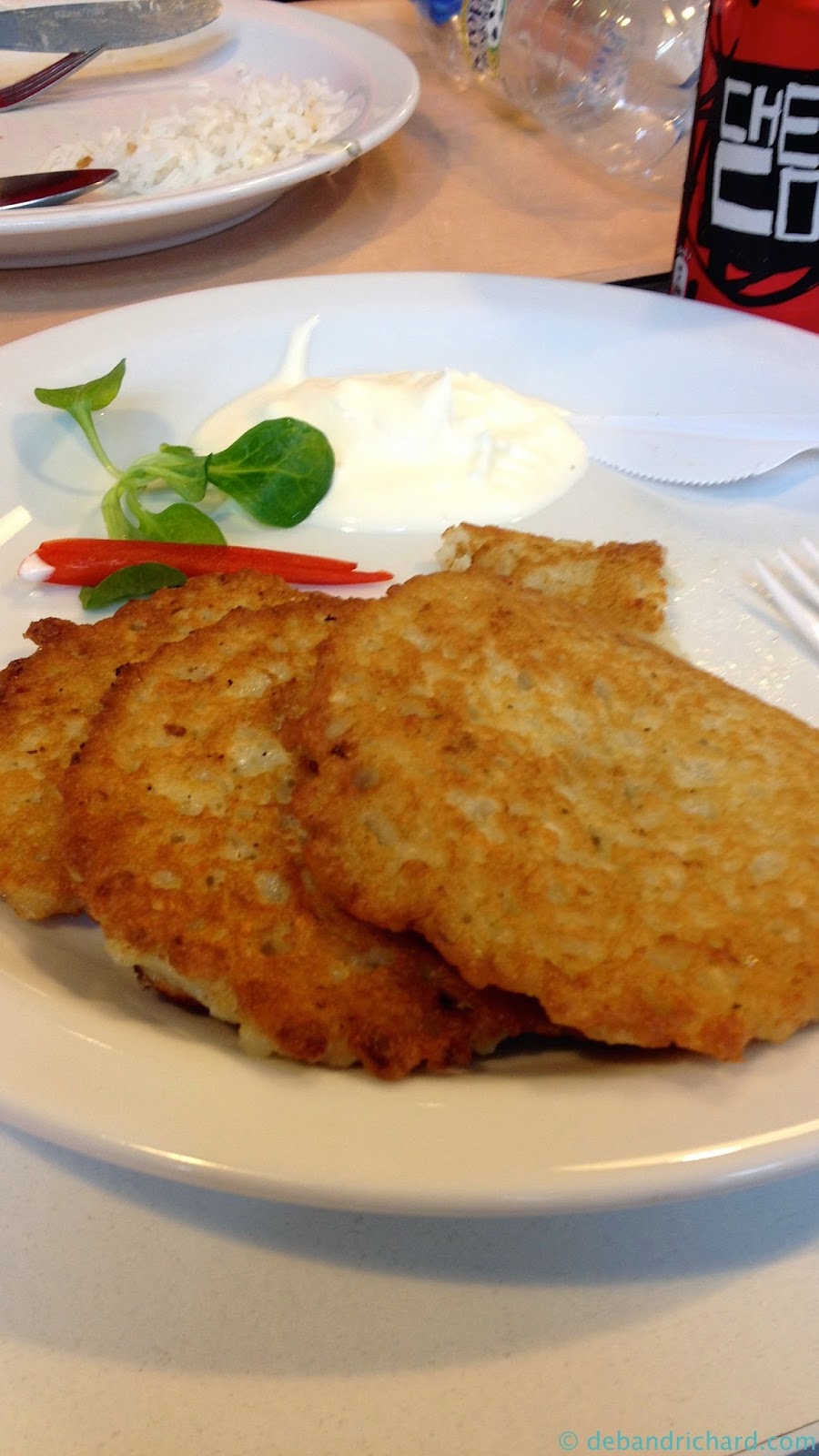 So the only thing Dad didn't get that he had really wanted was czarnina (duck blood soup....my vegetarian self doesn't find that appetizing at all)....after asking at several places, we asked at the visitor information center. The guy didn't know what we were talking about. Another girl in there did, when she describe it to him, he remember his girlfriend has talked about her grandmother making it. So it is not found at restaurants in Warsaw, pretty much it is something only made by grandparents out in the country.
Posted by Deb at 8:32 PM