So Clarissa calls my dad Papa (shortened version of Grandpa I guess), she may outgrow it but it is cute for now.

Back a few months ago, we went to Mtskheta to explore. So I won't go into the history of the place, since you already know it.  One morning while the kids were in school, I took my dad to visit it. We arrived really early after dropping off the kids and Richard, the town was just starting to wake up. So we walked to the Svetitskhoveli Cathedral. I remembered to wear a skirt and bring a scarf, but I forgot men are suppose to wear long pants. Since my Dad was wearing shorts, we just peaked our heads in.

My dad did sample the water from the interesting water fountains (after watching someone else grab a drink). 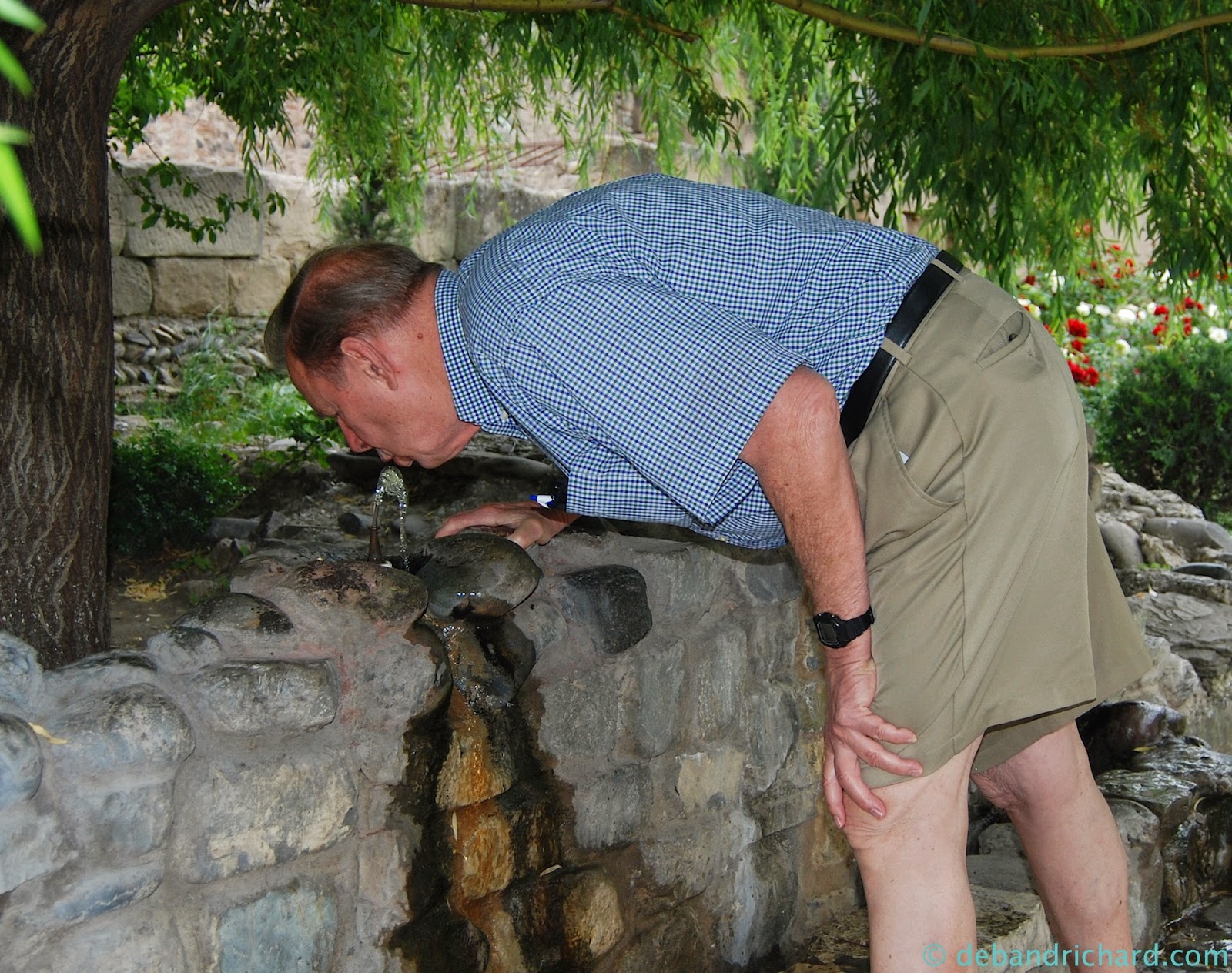 I also got a token photo by the church where I got a shot of the kiddos. At times, seeing the sheer size of the church compare to my dad really makes the fact it was built in the 11th century just that more amazing! 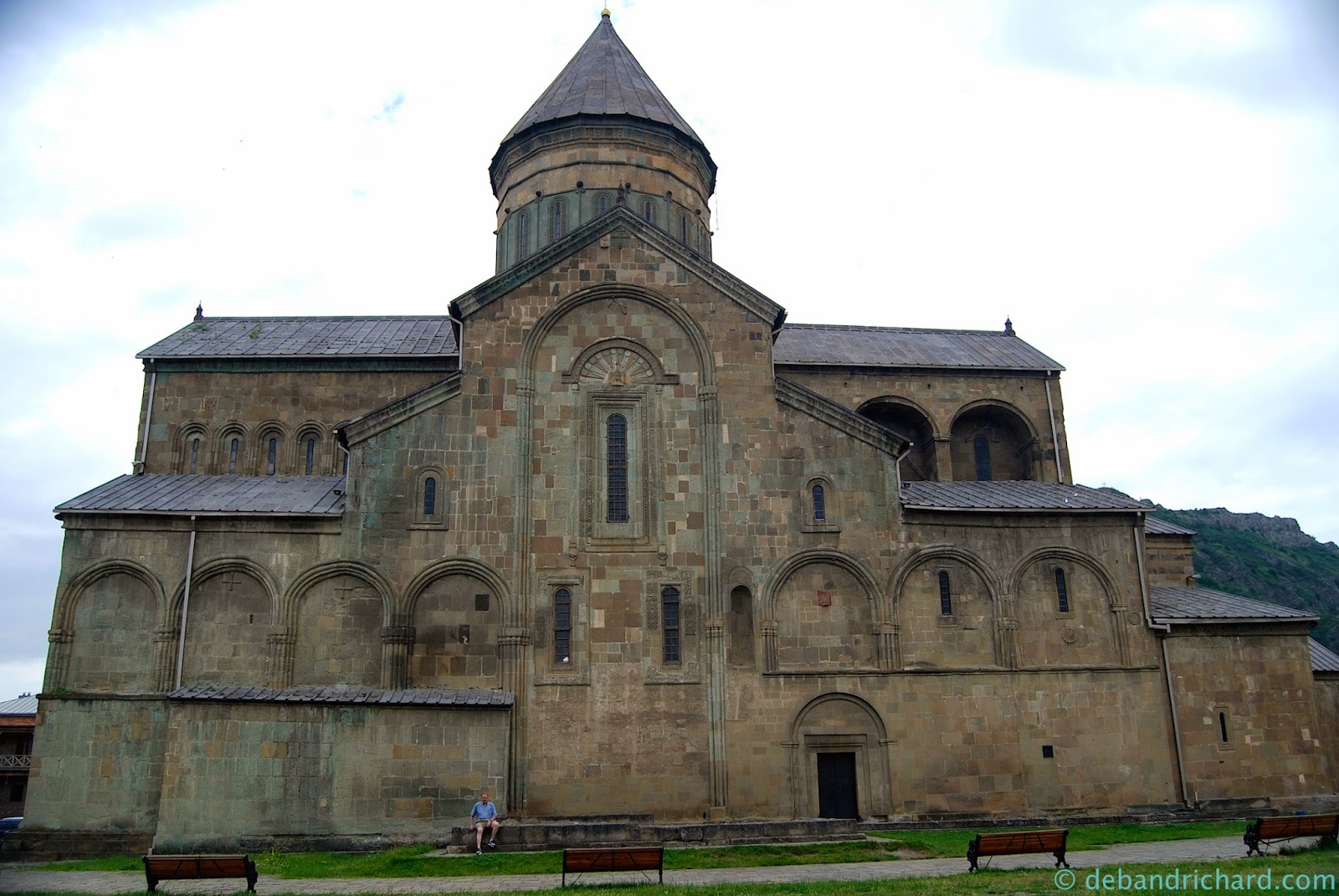 A couple days later. We all went up to Jvari Monastery. Jvari sits atop a hill overlooking the city of Mtskheta. You can see where the Mtkvari and Aragvi Rivers meet. (Mtkvari is the river that runs through Tbilisi). You can also the Svetitskhoveli Cathedral towards the middle of the photo. 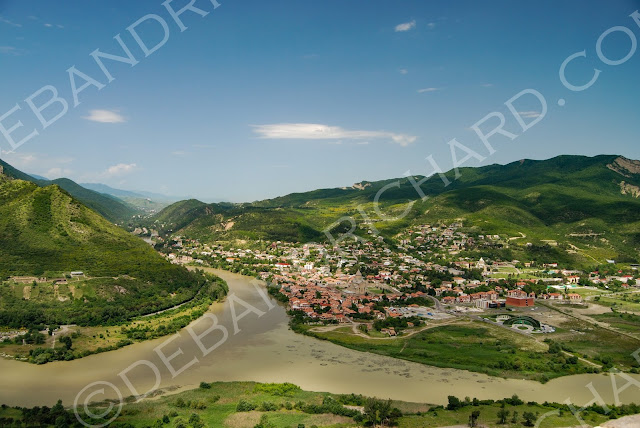 A cross was built on this sight during the 4th century to mark the victory of Christianity over pagan gods. During the second half of the 6th century a small church was built north of the cross. This church is ruins, but the kids really enjoyed looking out the windows. 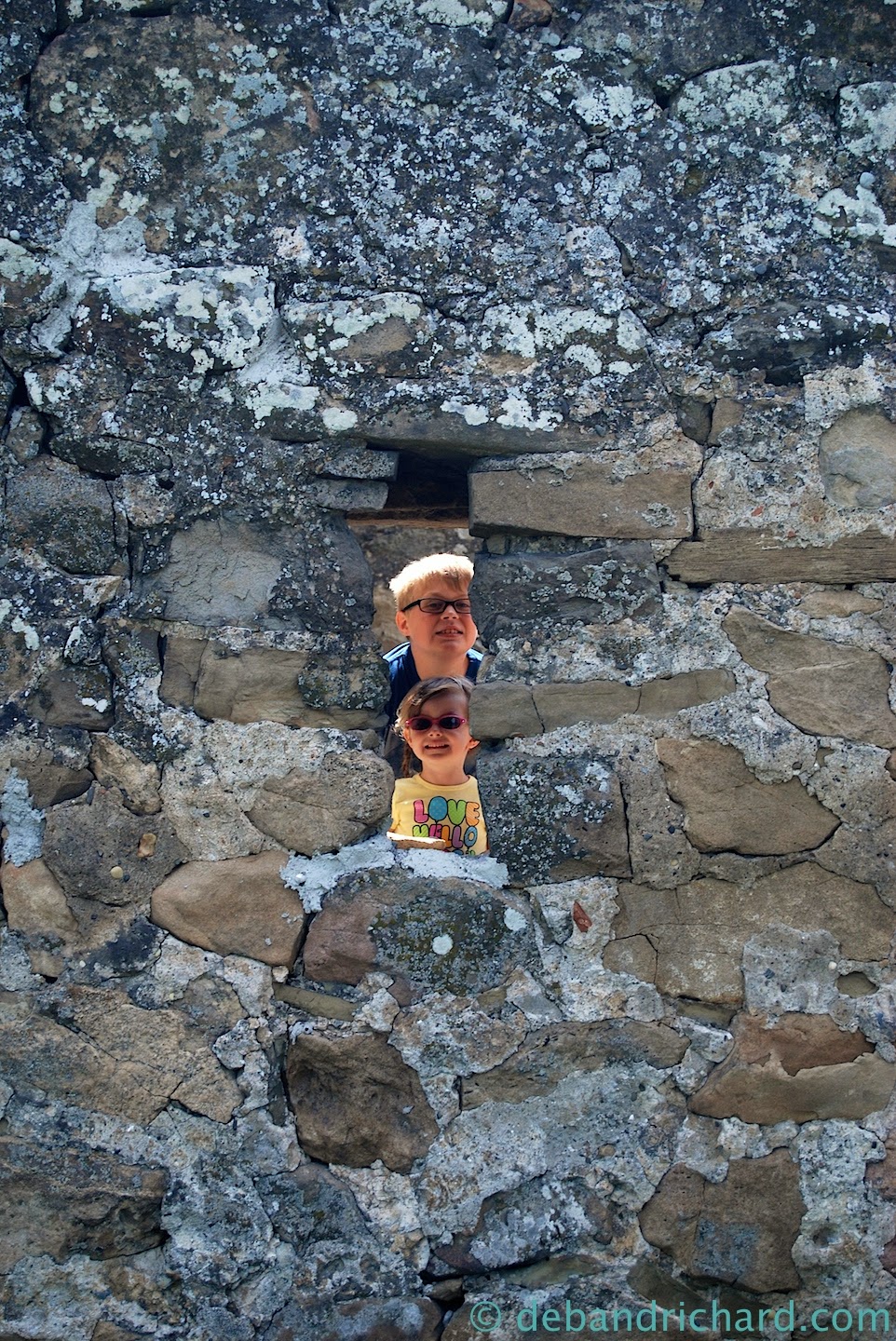 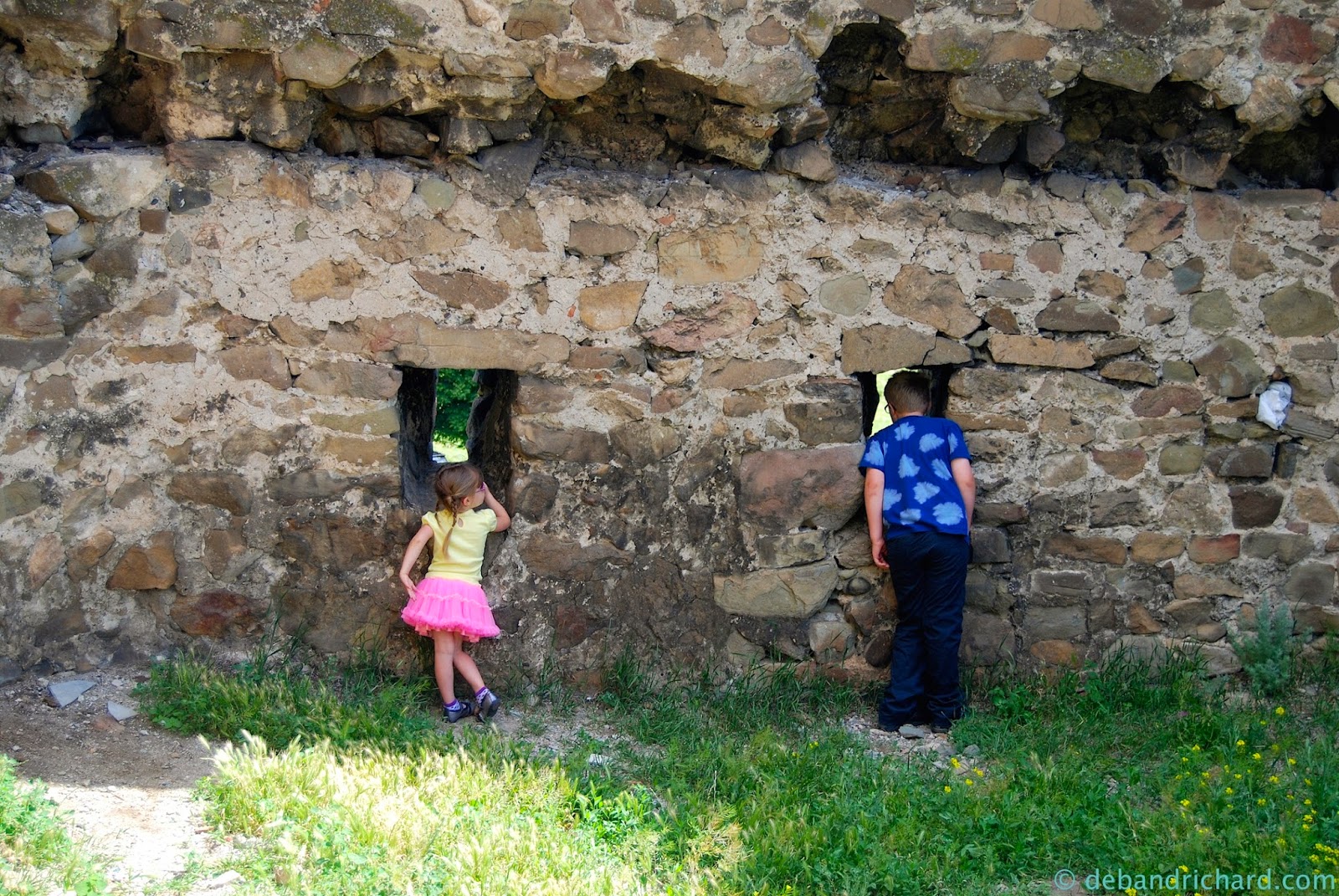 About a century later, a larger church was built around the cross. Other than some damage during an Arab attack in the 10th century, the church is in really good shape. 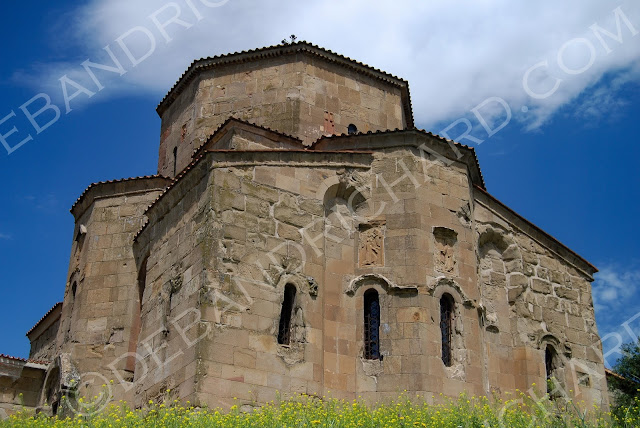 Inside the church you can still see the stone base of the original 4th century cross (can't see it in the photo....it was crowded during the service going on so we only got one shot)!! From the angle my dad, the kids, and I were standing at, a sunbeam from the window was hitting the cross directly. Richard got a photo in a different spot, but you can still see the sunbeam. 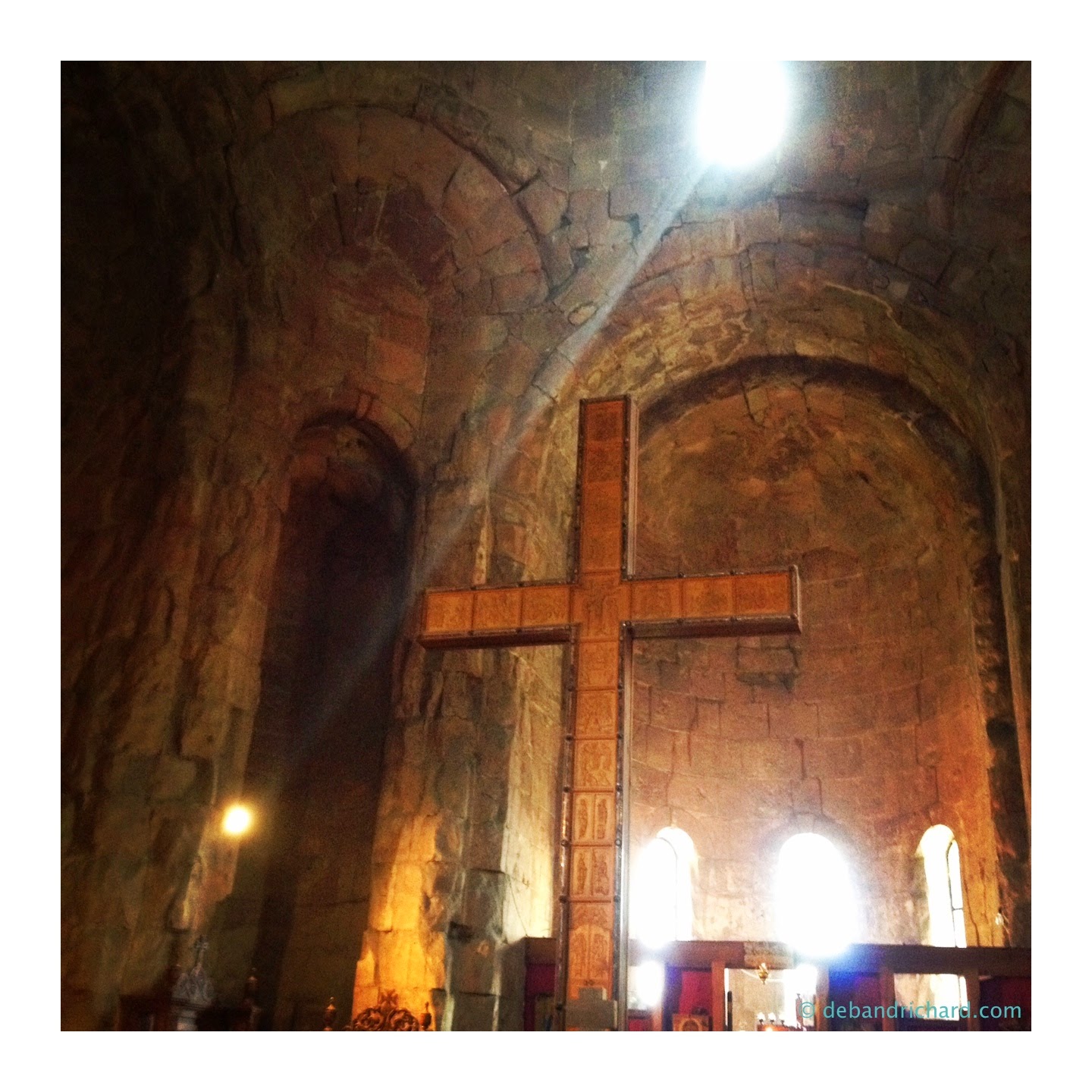 Since we had my dad with us, we took some family photos in front of the Georgian landscape. 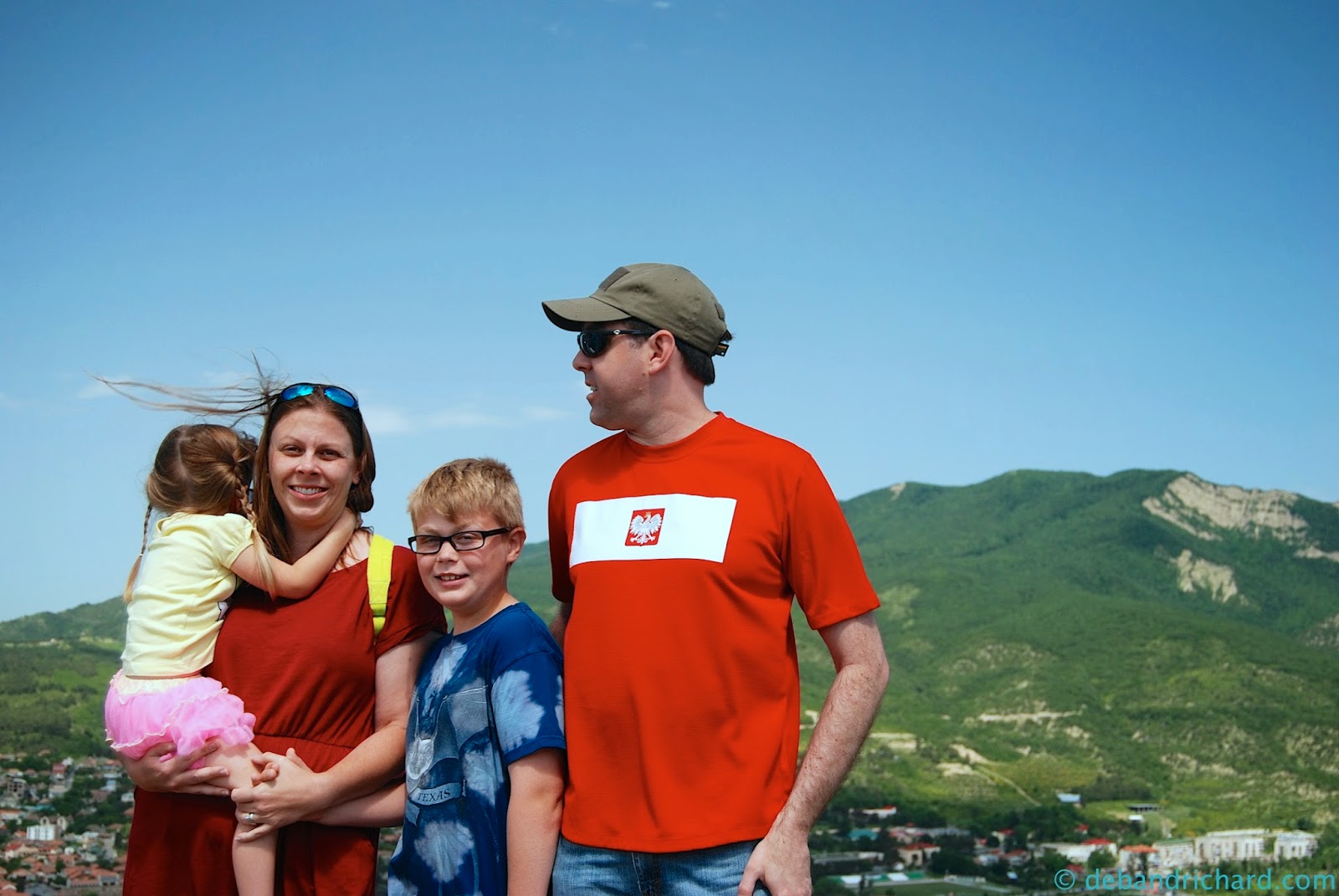 I didn't say we were all looking at the camera smiling.....it may have been a tad breezy up on the top of the hill. 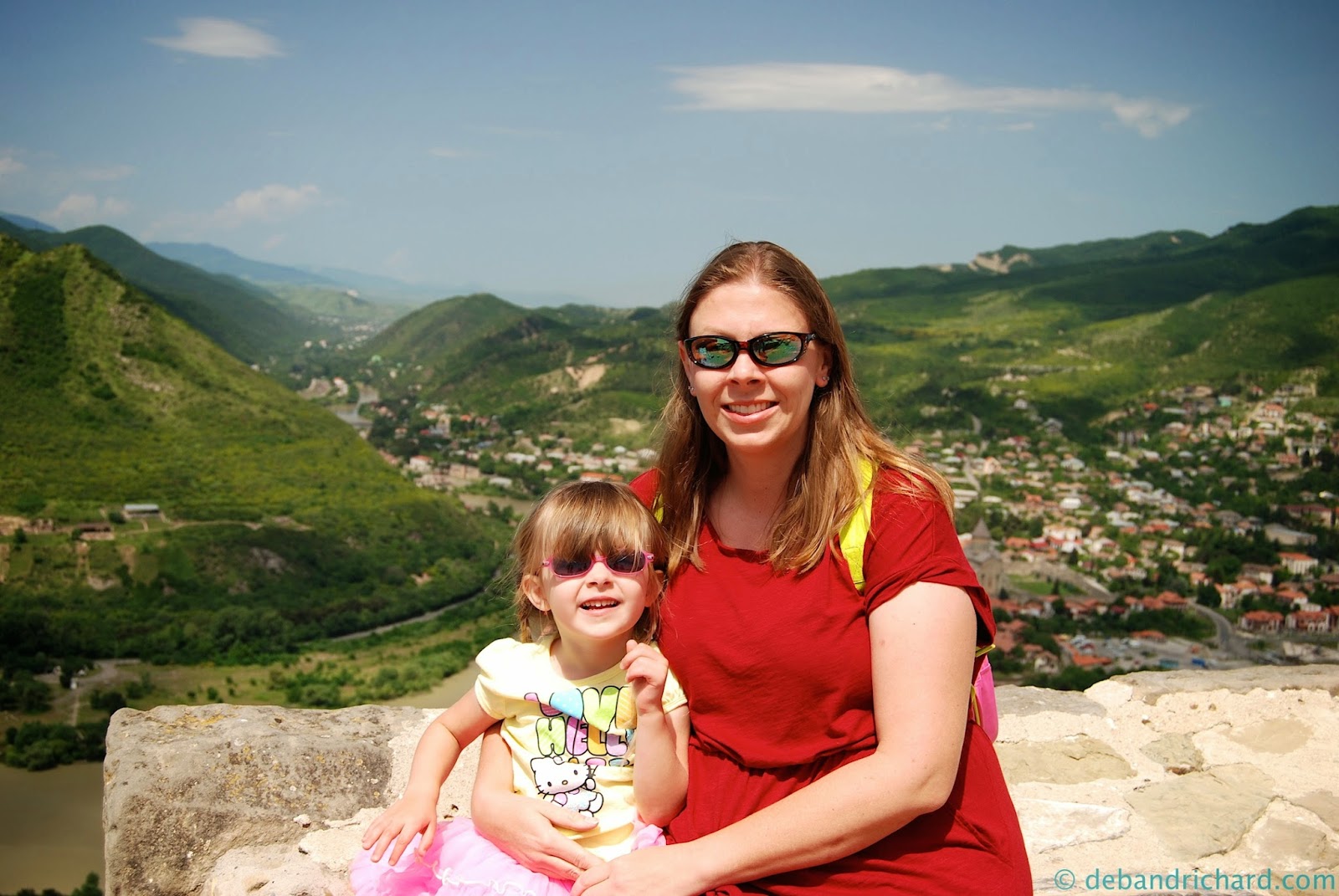 She can smile nicely for photos! 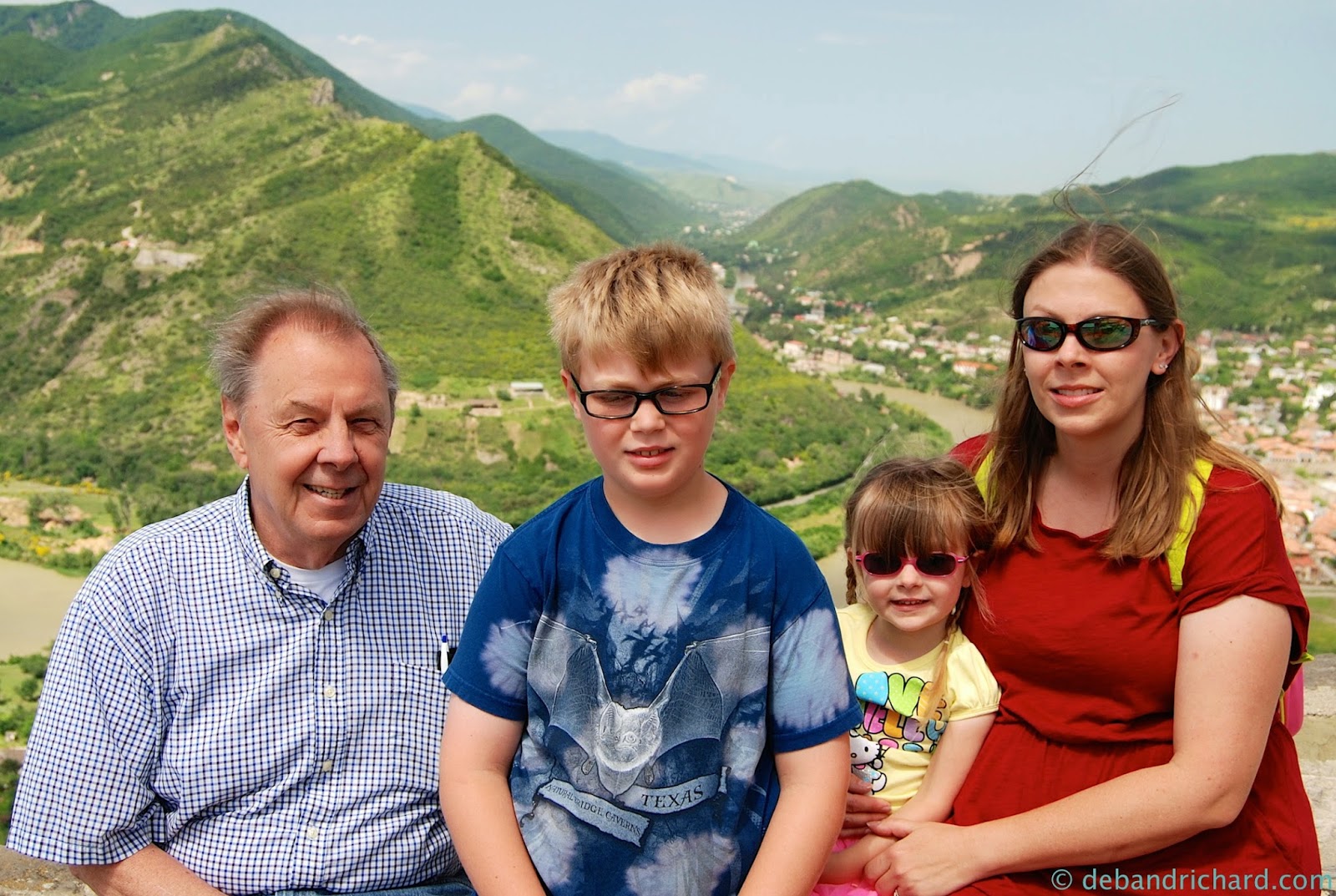 With my dad, Mason was a little uncertain of the edge/wall we were sitting on. 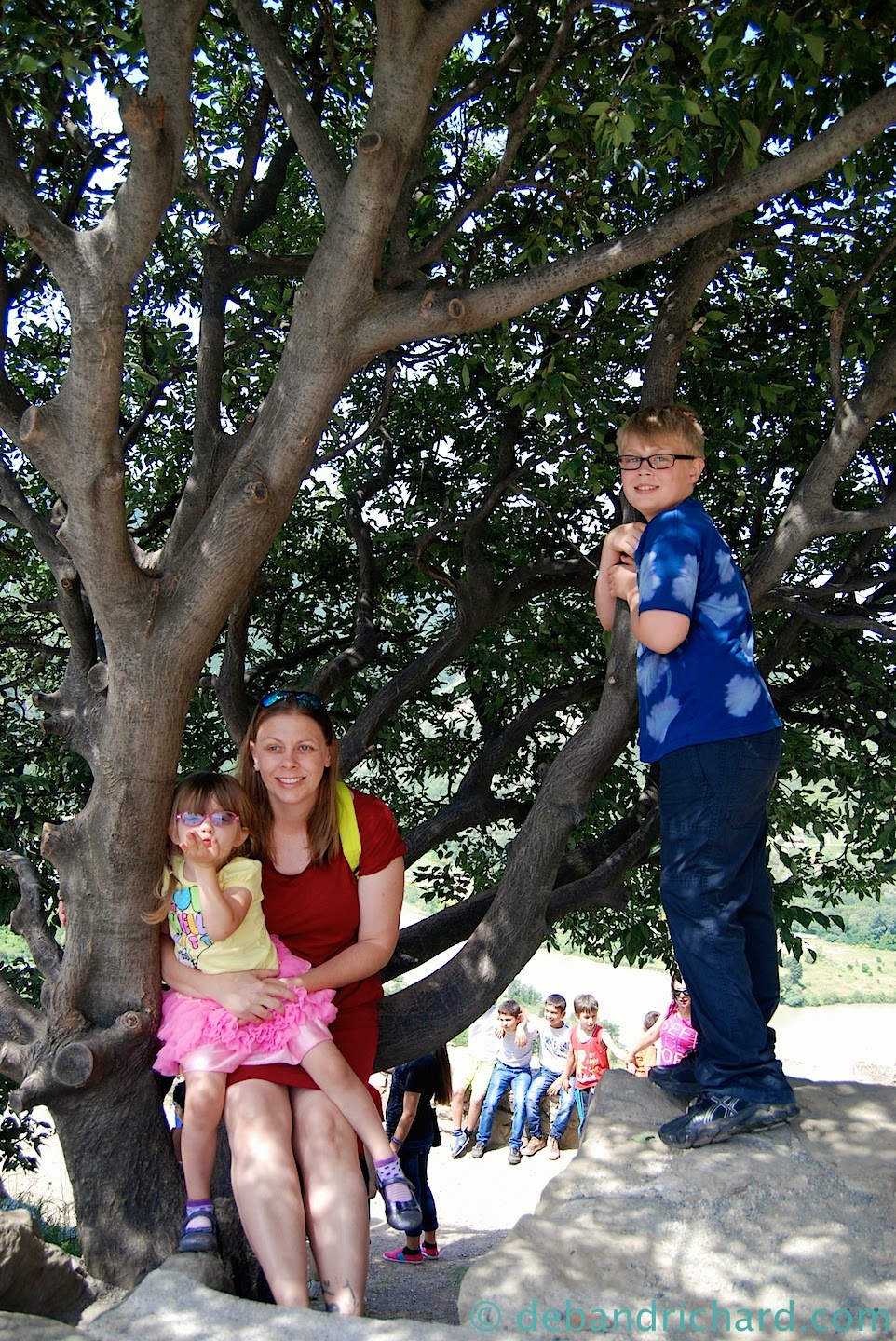 Cool tree with built in seat. Clarissa is blowing you kisses! 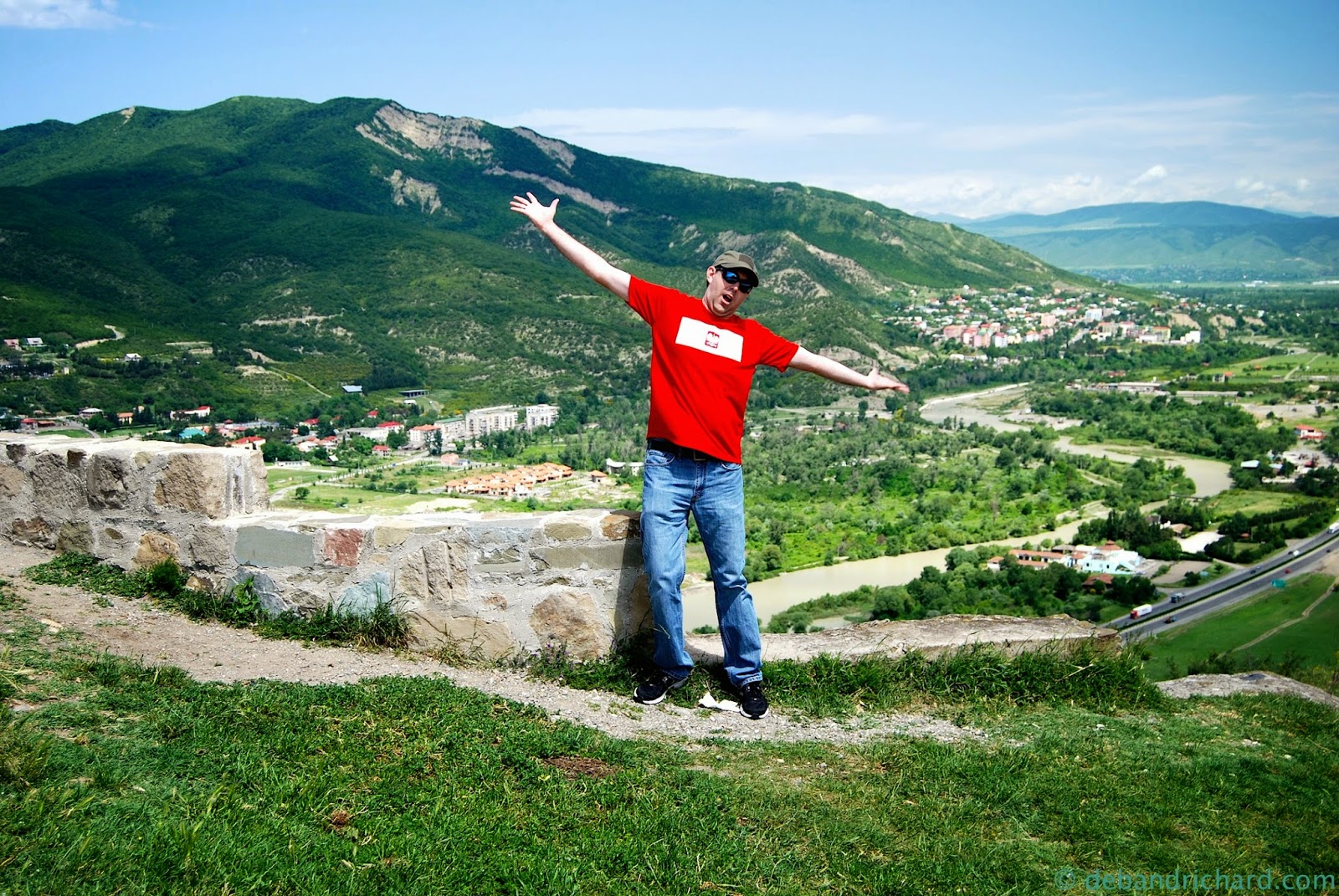 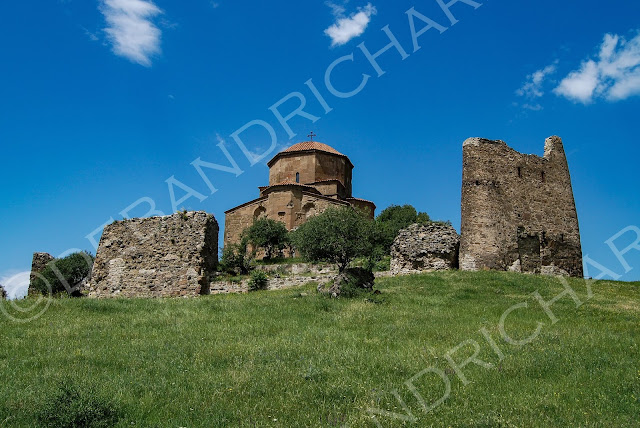 The old church ruins and the the current Jvari Monastery. After visiting the monastery, we took my dad to lunch to sample some Georgian food. We were too hungry....we did not get any photos of the food.
Posted by Deb at 2:52 PM