As I mentioned at the end of the fall post, we had special visitors for holidays! So special that I had to weed through 1500 photos to pick out 150 to edit....we shall see how many make the cut for blog posts (luckily not all of them....and I'll probably split them into a couple posts....lol). Over Thanksgiving week, Mason flew to Texas to enjoy the holiday with his dad and step mom. On the return flight, Richard's parent met up with him at the airport. So though technically he flew back unaccompanied, Mason had travel companions. I think a highlight for my in-laws was upon arrival in Doha, Mason flashed his diplomatic passport and then asked the customs official these are my grandparents, they are traveling with me, can they accompany me in the diplomat line....and the official allowed it (typically just a shorter line for weary frequent travelers with special visa requirements). 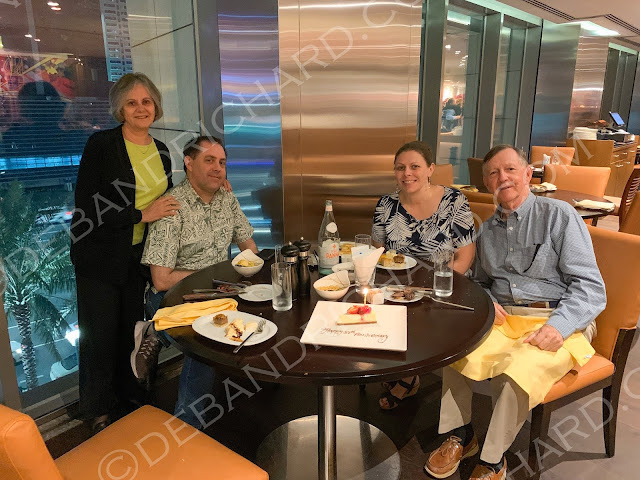 Once over jet lag, we took Ann and Jim out to Ipanema, a Brazilian steak house, to celebrate their wedding anniversary. Richard and I have been here before. The grilled pineapple is the best (so my non-meat eating self will go and get the vegetarian meal and gorge on grilled pineapple!!). It was a big anniversary this year, which I happened to mentioned when I was setting up the reservation. The restaurant was super sweet and brought a special piece of cheesecake for the couple. 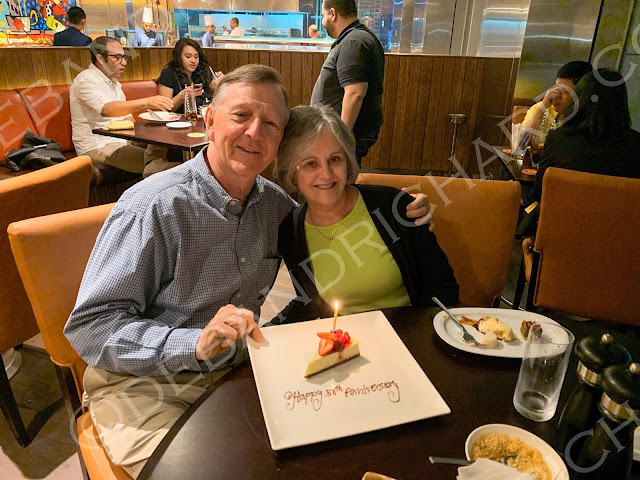 Also, that first weekend after they arrived, Jim gave a presentation to Clarissa's and the other Brownie troop in our local Girl Scout committee on Morse Code. So while getting over jet lag that first week he had to get to work making his sign. The girls enjoyed Jim spelling out their names and other expressions in Morse Code. G.I.R.L. is a big catch phrase for Girl Scouts, so we asked him to spell out 'Girls Rule', have a listen.


For their first two weeks or so, the kids were in school. So Clarissa got spoiled having a peeled apple in her lunch everyday (mom will just wedge it, but Bajoo will peel it!). Mason had a belated birthday party with friends (we were so busy in November there were no weekends that worked that we had to post-pone it)! At the start of the school year, I signed up to help with the Winter Holiday class party for Clarissa and both Ann and Jim came with me. They got to see the kids' school and Clarissa's classroom and classmates/teacher. I took in a pinterest snack! Grinch fruit kabobs. I totally nailed it too! 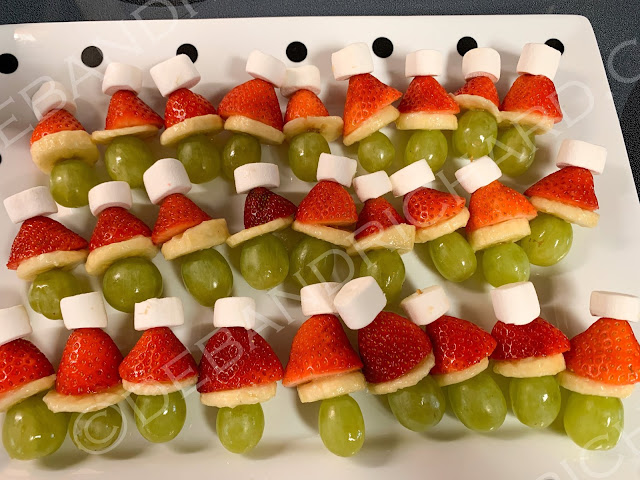 One of the weeks, while the kids were still in school, Richard took off a few days to do some sightseeing with Ann and Jim. Of course one of those days we went down to the Rugman of Doha (we had promised Jim we'd take him much to Ann's dismay). Richard and I and had decided we wanted to get a bigger rug also (so we had purpose for going). So we told our parents (both sets) and each other that we'd pool all the gift funds to get a rug. That way we could get something really nice. So we learned more rug history. 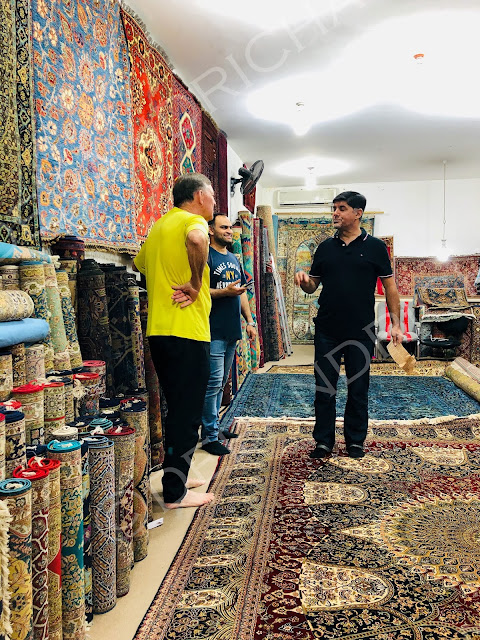 I think Jim loved it. The Rugman (Riyaz if you want to call him by his first name) knows so much history and could answer all the questions Jim asked (yes, you take your shoes and socks off so you can enjoy how each rug feels by walking on it). He told histories behind the patterns based on which tribe they were woven by. 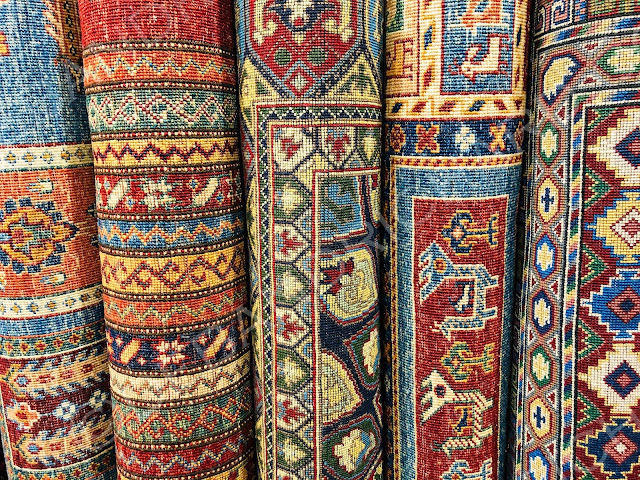 We looked at rolls of rugs. Then once unrolled, walked on and admire the beauty of these rugs! So many choices. So many colors, patterns, and so soft! 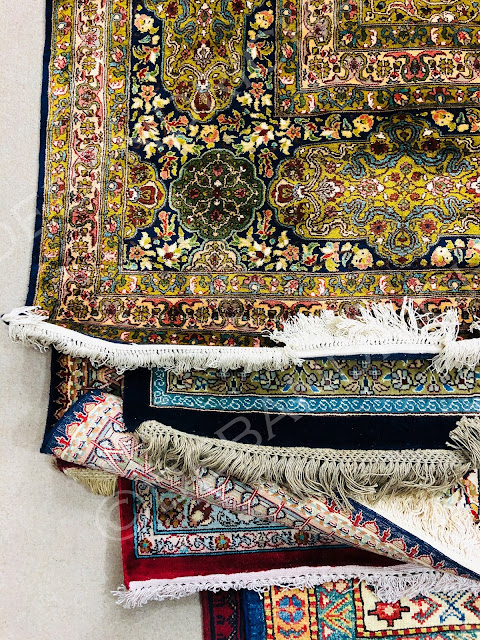 We finally decided on a silk rug! We knew at some point we would get a silk rug and once you walk on a real silk rug....it feels so soft! You don't want to buy a wool rug anymore. The coolest part of the whole process was the Riyaz's father was in town. Just like older American's like to head south to Florida in the colder months ('snowbirds' they are called), in this instance Riyaz's older parents from Kashmir, India came to Doha to escape the colder weather! Why is this such a big deal? The silk rug we chose was designed by Riyaz's father, Mr. Gulam Rasool Bhat. Mr. Bhat also did some of the weaving on the rug (it takes so long multiple people weave). So to buy a rug and then shake the hand of the man who literally created said rug was pretty amazing!! Here's a picture of us, the rug we choose (it has red and blue....for both mine and Richard's preferred rug colors), along with Ann, Jim, Riyaz and Mr. Bhat! 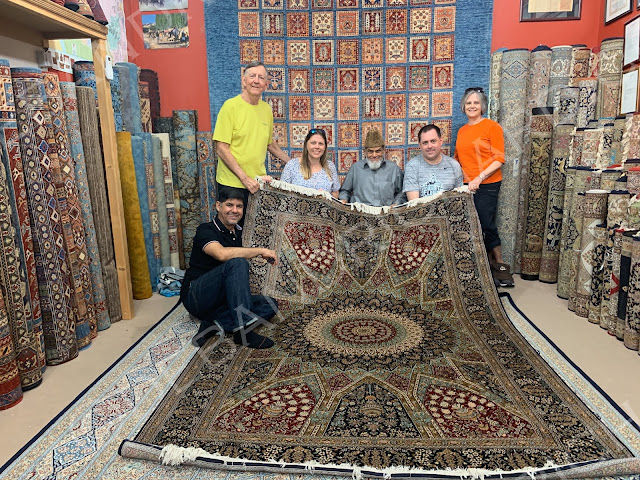 I did not take a week of vacation, so after that day of fun - I had to work. Richard took his parents out to Katara. Katara is a historical village with all sorts of art, theatre, science, cafes, beaches, mosques, etc. 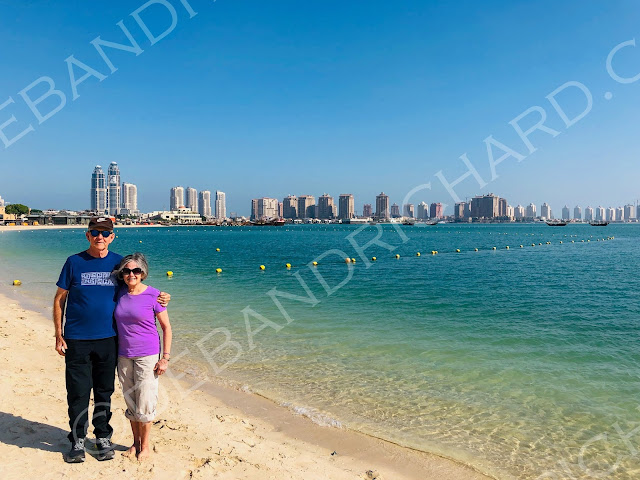 The weather was nice, warm for Ann and Jim and pleasantly cool for the rest of us! 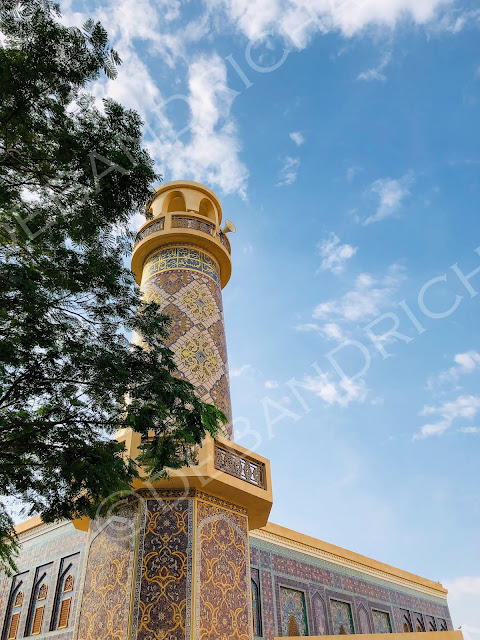 While they were here we did have a large number of unseasonably rainy days....so many that our Christmas elves spent a day watching the rain....lol. 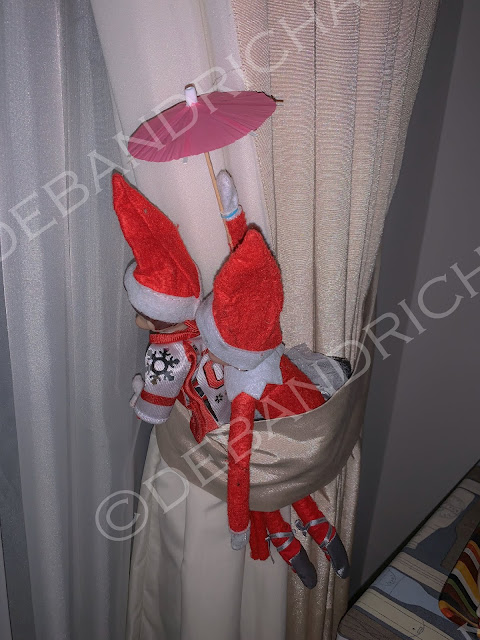 One day, while the kids were at school and Richard at work. I took Ann and Jim to the Sheikh Faisal Bin Qassim Al Thani Museum. Given I'd already been, I let them explore (I sat in the coffee shop and worked on one of the summer blog posts). 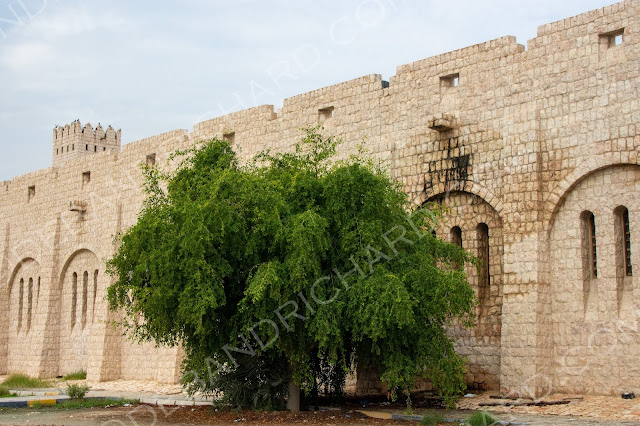 After they finished exploring and Jim chatted a while about history to the guy in the coffee shop, we asked him where the Oryx were. The guy directed us where to go. We found not only the oryx but this cute little Arabian Sand Gazelle (it was a heavy sprinkle of rain, so that's why it looks all wet). 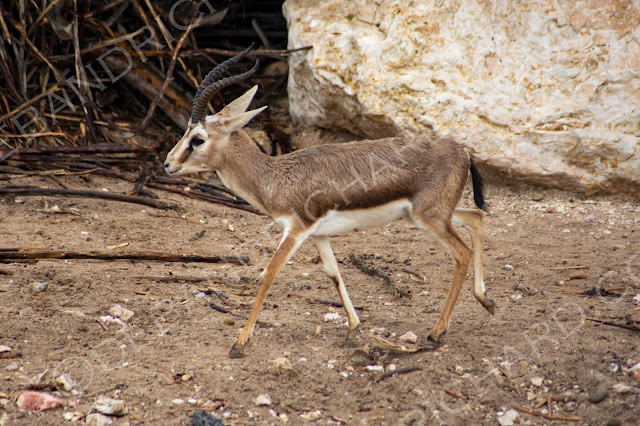 We saw a ton of the gazelle and Arabian Oryx. I had read that sometimes the way the oryx turn their head the two horns line up and it will appear to be a unicorn! I snapped a shot of one the "unicorns". 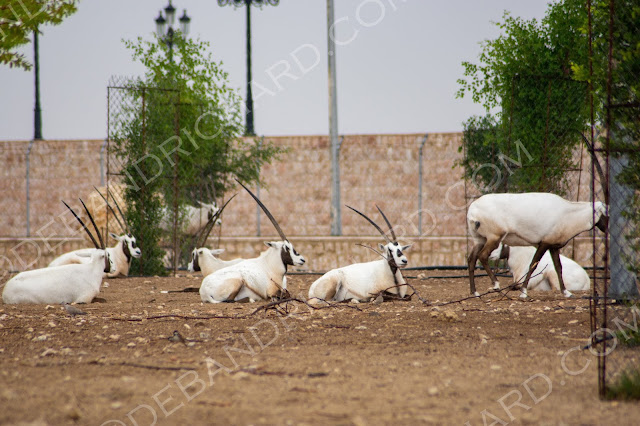 I saw a juvenile and it's momma. 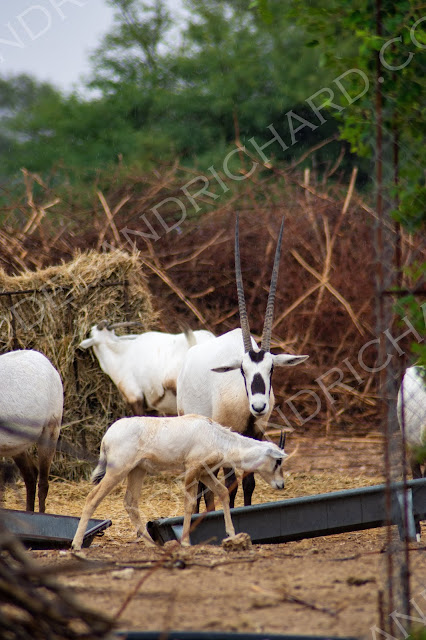 I had a staring contest with this oryx. I liked that the background there was no fencing, so it was more wild looking...and it was happy to pose! 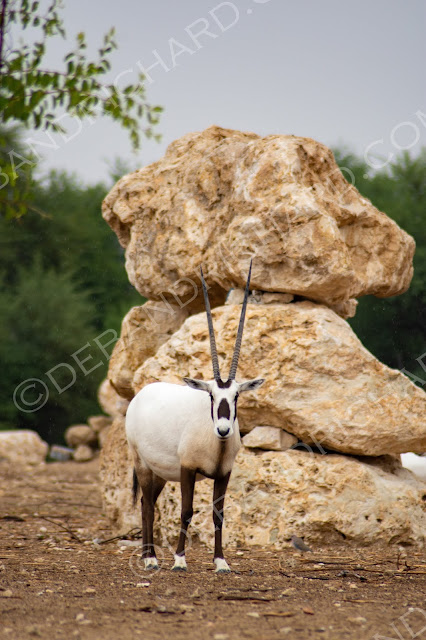 Qatar's National Day falls on Dec 18th, for the weeks prior to the day, the country has all sorts of exhibitions in celebration National day (I mentioned them last year). Given the close proximity, we took Ann and Jim up to Darb Al Saai. 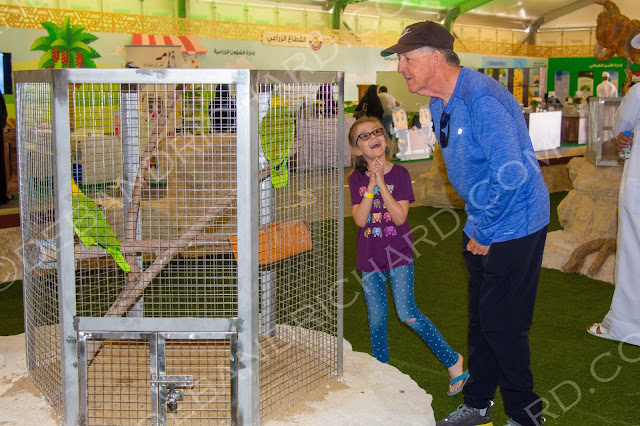 Lots of animals were seen and some were petted. 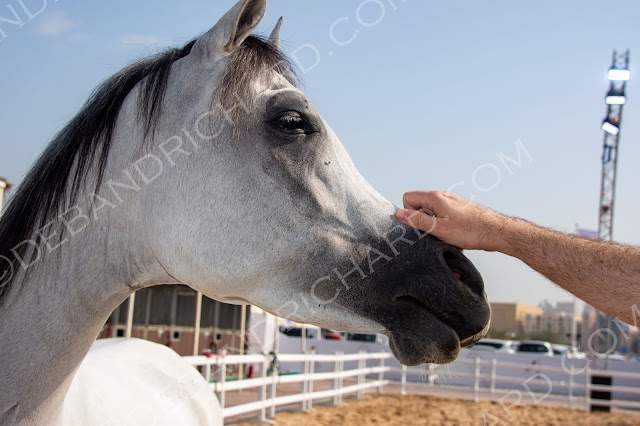 My horse loving friend from college said the Brown Arabian horse is playing around and either bucking or 'crow hopping'. 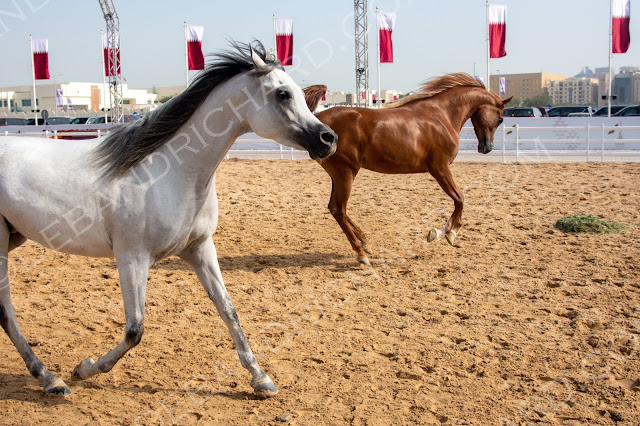 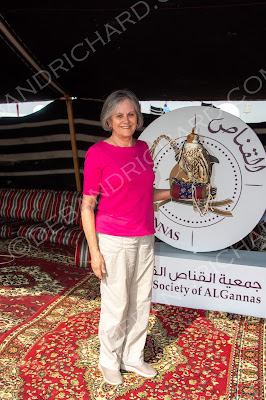 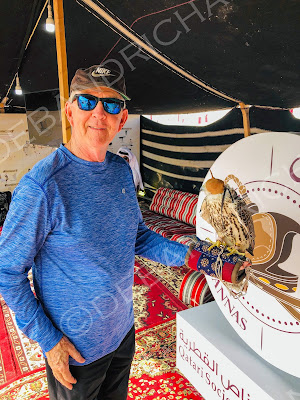 A maglis tent was sat in, Arabic coffee was consumed, and important decisions were made. 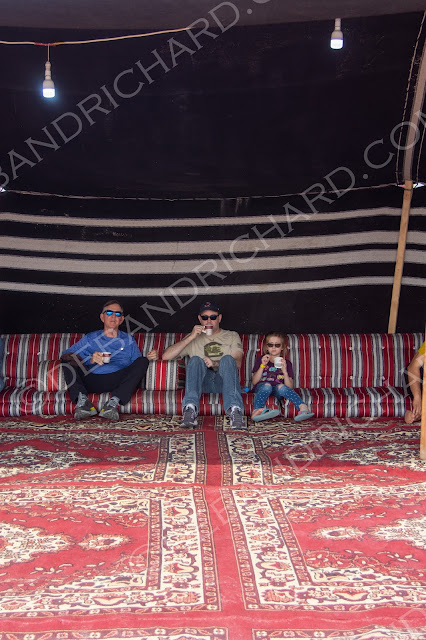 School finished for the winter break on December 17th, we celebrated Qatar National Day the 18th, and then we were in Christmas Break mode. I will wrap this post up here and save the rest of our visitor/holiday break shenanigans for the next post.
Posted by Deb at 2:56 PM