So I've been pondering what made getting the house unpacked so long here and I have some theories....thought I would share them so you all wouldn't think I've just been sitting on the chaise lounge drinking fruity drinks all day....lol.

So in Tbilisi, we moved into our permanent housing upon arrival, so we had time when we had no household goods to move furniture around to our liking. In Suva, we moved into our permanent housing with our UAB days before our first shipment of household goods arrived. Once we decided we wanted to do some furniture swapping that took several weeks due to the head warehouse person being on leave (which in return put organizing on hold, if we didn't get something we were requesting or they couldn't take what we were requesting to send back we'd have to possibly do more purging or figure out another place to store art supplies....in the end there was only one request that wasn't fulfilled).

Looking at housing in general, we had a big house in Tbilisi with a ton of storage (even larger than the house we had back in Charleston). So it was relatively easy to unpack and stow things 'quickly'. Here in Suva, there is a small price for paradise....get it...small....we have much smaller house. While the house is plenty big for what we need, when unpacking I had to assess is this something we truly need/want or can we donate/yard sale it? If it was something we needed/wanted, due to the long transport time followed by fumigation, everything had a lovely odor and had to be washed. Therefore, instead of unpack and stow, I had to unpack, debate, wash, dry, and finally stow.

Finally, timing and weather. When we arrived in Tbilisi, winter had just begun and it was cold, gray, and snowy! We also received our household goods within our first month of arrival, so I didn't really know anyone yet and it was easy to stay inside and unpack. When we arrived in Suva, it was the middle of summer, we were in temporary housing for two months before we moved and started receiving things. In that two months, I had signed up for a weekly French class, joined several women's associations, became one of the Year 6 parent reps (aka room mom...but with middle school less work), joined a book club, started to make some friends, Mason had gotten a part in the school production which the last month had a lot of late/weekend rehearsals I had to shuttle him back and forth to, and both kids seemed to take turns being sick. In fact one week, we made it to Friday and I did a happy dance that neither kid had stayed home sick from school that week. Also, as I hinted at here, a simple task such as getting groceries for the week can take a whole day with stops at multiple stores to get a fraction of what you had hoped to purchase. So life in general slowed me down (as it should).

Now that I have vented....I think I shall make myself a fresh pineapple smoothie and go enjoy it out on that chaise lounge by the pool....I earned it! 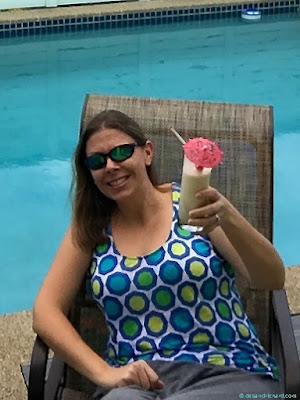