Recently I decided it was time to take another IT certification test. For IMS, once you are in the Department and with certain IT certifications we can get what is called Skills Incentive Pay or SIP. Depending on the certification, we can get either a 9% or 14% bonus which is good for 3 years. Though we have to pay for the training out of our own pocket, the benefits are worth it.

I've had a 14% SIP since 2014. Knowing it expires in another year, I wanted to go ahead and have something else ready to go. Looking over the list and trying to figure out what would be the quickest cert to get, I decided to go with the Certified Information Systems Manager, or CISM. The rub with this test is it is only offered 3 times a year as it is a paper/scantron test. Yes, think back to your high school SAT. Oh and it wasn't going to be offered in Fiji. Looking around, the closest place to go and take it would be Auckland, New Zealand.

I signed up for the test back in March and began my preparations. I ordered the official CISM Guide Book from ISACA (the company that manages the test). I won't beat around the bush, it is dry. I also ordered a 12 month subscription to their online test engine. They give you access to about 2000 or so questions (possibly taken from previous tests, or questions that have been thrown out, but who knows). For my prep, I ended up logging about 87 hours in the engine. To pass the CISM, you need to score a 450. There are 200 questions, but not all questions are weighted equally. Some have more weight than others, others are just beta questions and are not scored at all. Really, there is no way to determine how many questions you need to get right to pass. I read on another blog somewhere that if you are scoring between 75-85% consistently in the test engine, you will probably pass.

So on a Friday afternoon, I took a direct flight from Suva to Auckland. Deb and the kids had to stay behind because of school and this was going to be a quick trip for me. I arrived that afternoon, checked into my hotel, and then went to find where I was taking the test (it was at the University of Auckland, but I wanted to scout out the exact building. I was glad I did, as you will see why). On my way back to the hotel, I found a Starbucks. Oh Starbucks, how I've missed you. I went back to the room, hung out for a bit and then went to eat. I found a pretty good steak house right around the corner from the room. Back to the room, I FaceTimed Deb and the kids and went to bed.

Saturday morning I woke up earlier than I planned in a mild panic. I did a quick review to calm my nerves, then went down to breakfast. Afterwards, I headed over to the University. I got to the room where I was told to go, and was waiting with about another dozen or so people to take the test. We were told we had to go to a different building, so we all hiked about 2 or 3 blocks downhill to another building. We then sat in the lobby while they could set the classroom up for us. After about 10-15 minutes, we were told the bomb scare was no more and we could move to another building (bomb scare what?!). So we hiked back uphill to another building and waited another 10-15 minutes for them to set up. I finished the test in about 3 hours (4 hour limit).

After the test, I dropped my pencils off in my room and decided to treat myself with another Starbucks run. I may have hit Starbucks the day before the test and then again right before I caught the shuttle to the airport on Sunday. Priorities people! 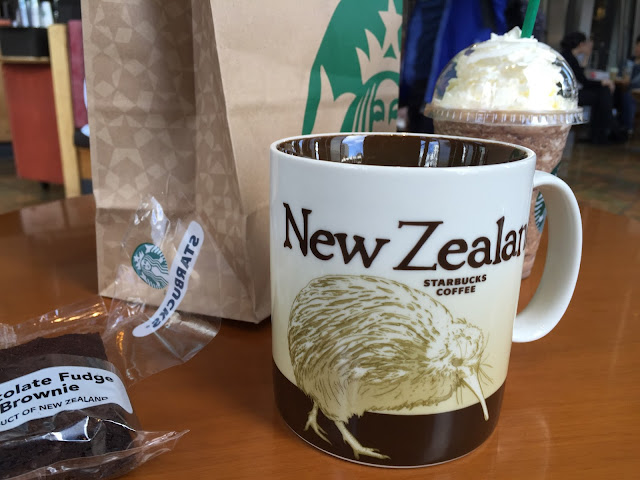 One thing Deb and I've started to do on our travels is collect Starbucks city mugs. So far we have a decent collection. I couldn't find an Auckland one, so I got a New Zealand one instead. When we go back hopefully I can find one (along with Wellington and Christchurch mugs, priorities!).

I decided to walk around the city some and found something I had to take a picture of just to tease Deb and the kids with! 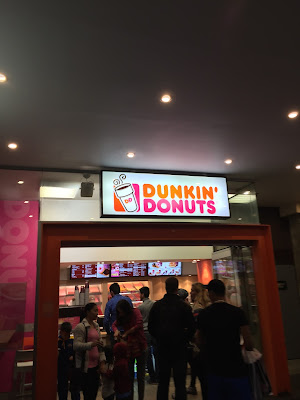 I'm not a huge Dunkin Donuts fan (born and raised Krispy Kreme thank you very much!) so I didn't get any.

After grabbing a few souvenirs for Deb and the kids, I decided to visit the Sky Tower in Auckland. At over 1076 ft. tall, it is the tallest man-made structure in the Southern Hemisphere. 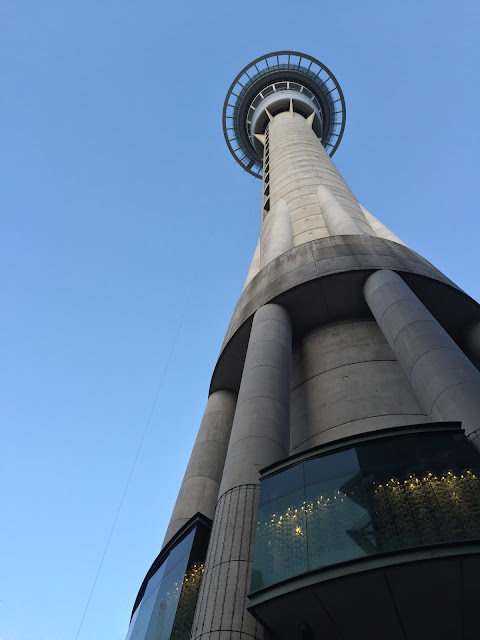 After a quick elevator ride I was up on the observation deck enjoying a beautiful view of Auckland. I can see why New Zealand is called the "land of the long white cloud". 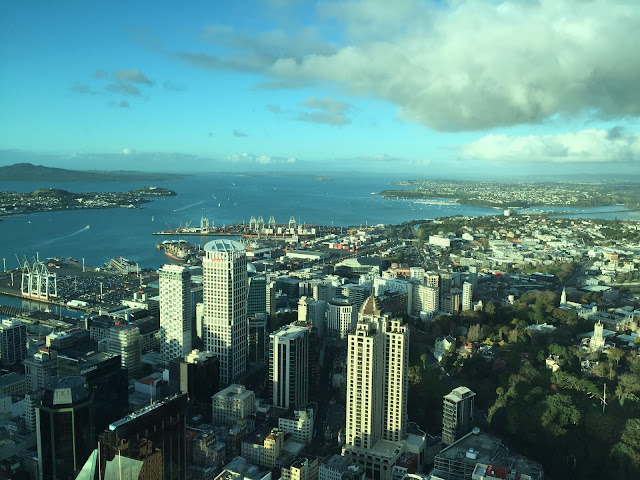 Around the floor they have glass/acrylic bricks where you can look down below. 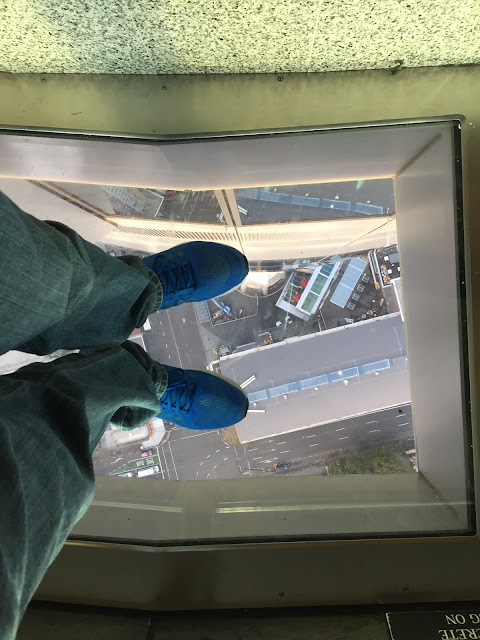 And at night, the tower is all lit up. 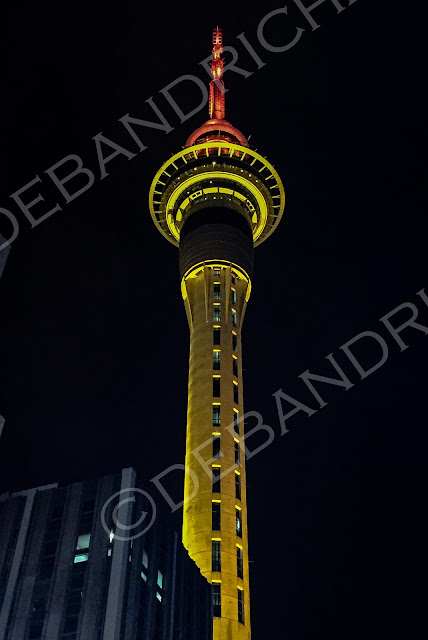 The next day, Middle Earth saw me off as I headed home. 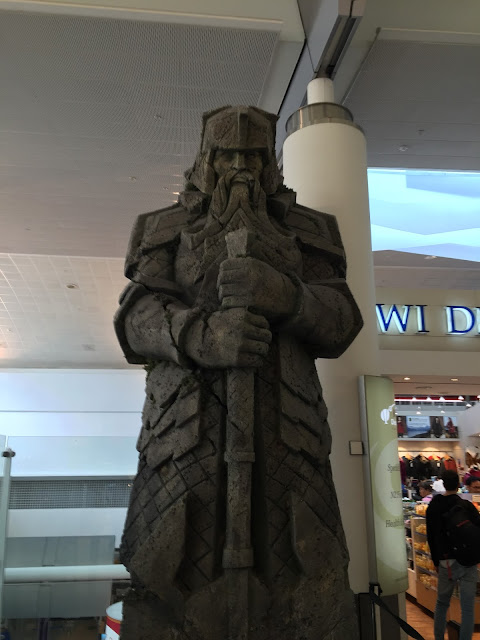 Somewhere over the Pacific between New Zealand and Fiji. 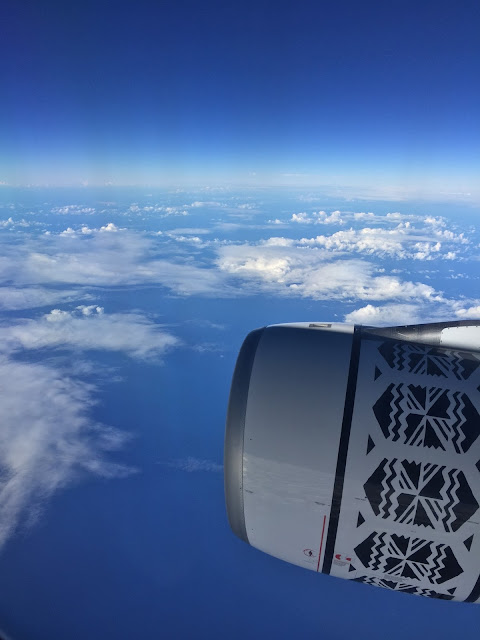 Now I'm sure you are asking did I pass the test? As this is a paper test, it has to be sent back to the US for grading. So I won't know for 5 weeks or so.

I really enjoyed my trip to New Zealand. I wish Deb and the kids would have gone, but as Deb told me one of the kids would have been up all night and I wouldn't have gotten any sleep before my test. We are planning on going back hopefully twice before we leave the region and explore more of the "land of the long white cloud'.