So back during our post TC Winston days, after our outdoor dinner but before we would bathe the kids and hunker down in the lone ACed room, we would sit outside and watch the bats and chat. It was about two months before Clarissa's birthday but with shipping times I need to order decorations about a month before her birthday and we had nothing better to do....so we started planning her birthday party. I asked the question of what theme. She said elephant...then her and Mason ran with it....and do I mean ran it with it! Elaborate drawings of an obstacle course with a water trap, life-like costumes (not sure who was making those), I think I recall jungle zipline being thrown around. 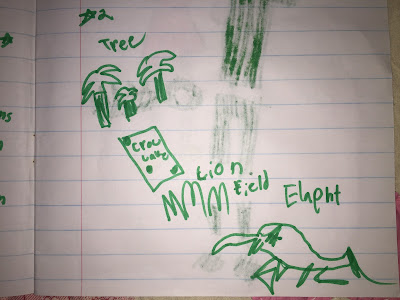 See...I kid not! I don't know if they were thinking we could rent an elephant like you can rent ponies in the US or what! Given we had nothing else to do and they were getting along....we let them go to town.....so when it was time to place the order for cups and what not, elephant (Clarissa's favorite animal since forever) was still in play....so we picked out a cute girlie pattern. Of course, by the time her birthday came around and she had attended a couple all girl birthday parties (we've hit that age now)....princess was now the theme she wanted....given we had gone girlie elephant and not full on jungle elephant it was workable. 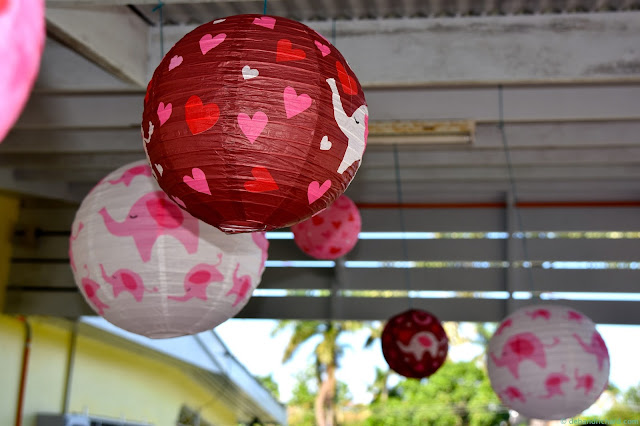 Luckily, you don't need to give much notice locally for parties. Stateside about 2 weeks is somewhat standard notice for birthday parties, here 2-3 days while suffice....which actually worked to my advantage. Once the main living area and Clarissa's room were box free and things stowed away, I went into party planning mode. Wednesday I printed out invites, Thursday she gave them to all the girls in both classes, Friday I got RSVPs, and Saturday we partied! I actually had a bit of fun with the invites. I used the printer to print each girl's name on the envelope in a royal looking font and of course their title.....Princess. For invites, I googled princess invite wording, took wording from several of the search results, put together an invite in powerpoint, and then printed it out on some photo paper I'd gotten free when we'd bought the ink refills.....viola! 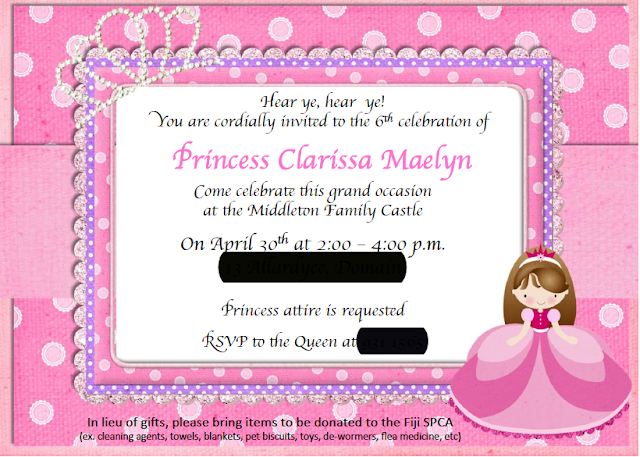 For snacks....Clarissa wanted popcorn and sno-cones.....of course. We also had some cut up pineapple and grapes. She wanted doritos, but both grocery stores were completely sold out....so she got potato chips.....oh Fiji! Oddly enough, she choose regular lemonade over pink lemonade. 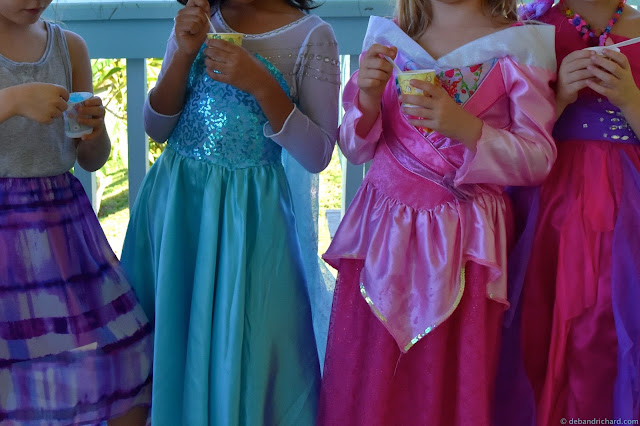 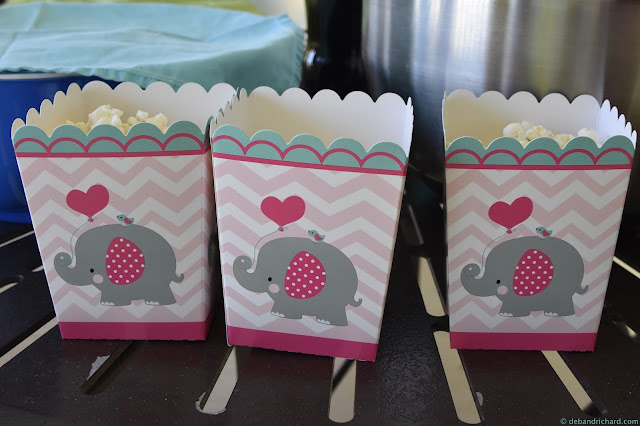 Bonus of moving every few years....you don't have to reinvent the wheel...you can recycle games! So while guests arrived we had out the make a necklace or bracelet with beads (complete with elephant shaped beads this year). 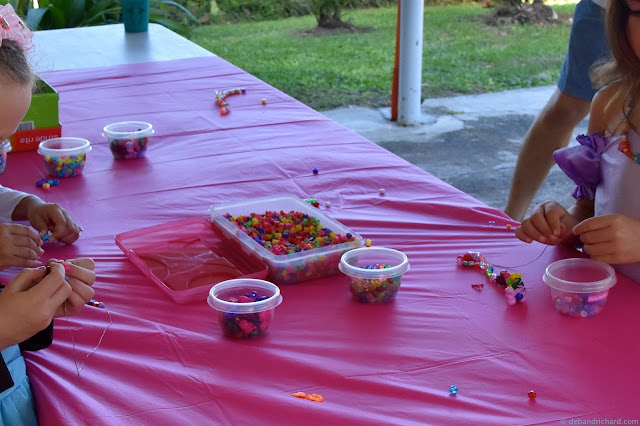 I attempted a game where they had to race to one laundry basket and grab a shoe, then run to another basket and like Cinderella's prince find the matching shoe, get them on, then strut their stuff on a red carpet relay type game. I think they were a little young to fully understand the concept. I did have a basket of mixed shoes of my heels and Clarissa's dress up shoes (and another mom's heels....I had to borrow some, I don't have many heels....in the land of flip flops everyday). The girls all went for Clarissa's sparkly dress up shoes....and had fun wobbling in her heels (Clarissa wears them so often she can run...to funny). So I think they had fun....but by the photos it appears they all were just staring at their feet most of the time while waiting on the red carpet for their turn.... 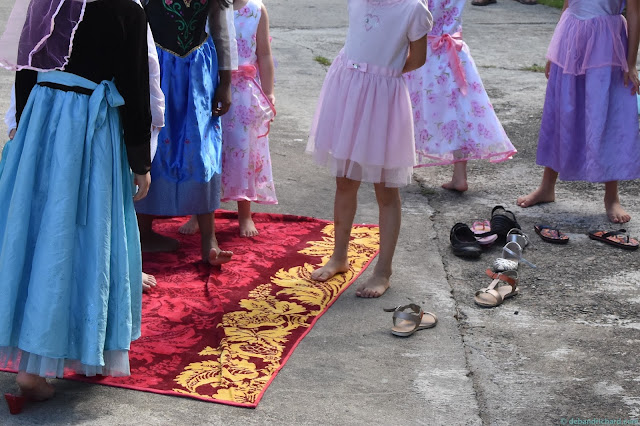 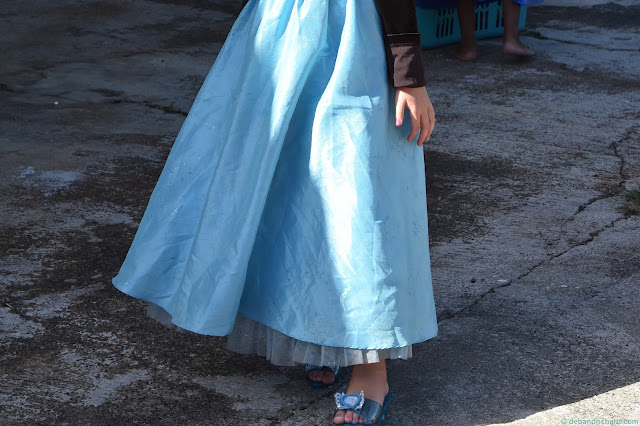 Back to another recycled game.....we used the knock out the evil villains game we made for Clarissa's 4th birthday party. She had really enjoyed it, so we kept it and play it occasionally....so when you start planning a party on Wednesday.....you play it again! 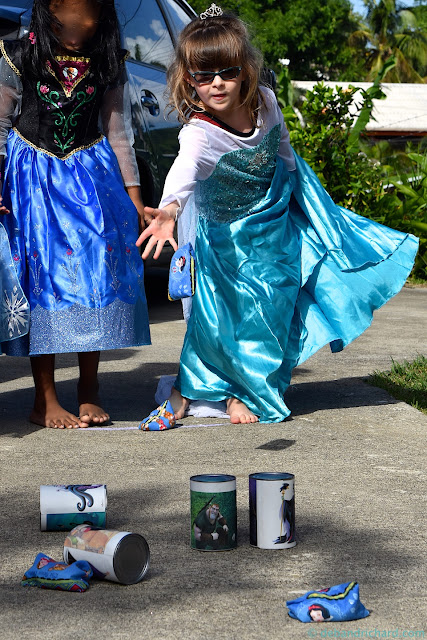 I asked which girls wanted to kiss a frog like Princess Tiana and got a lot of 'ewwws'. When I said it was not a real frog they agreed.....Mason drew a giant frog on some poster board and I cut out some kissy lips. It was fun alternative to pin the tail on the donkey....what princess has a donkey? Unfortunately, I didn't get a great photo of the frog... 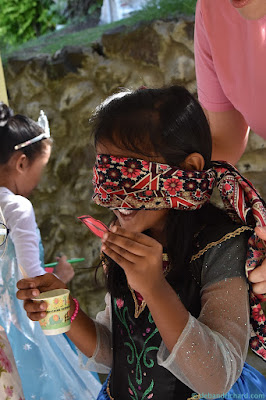 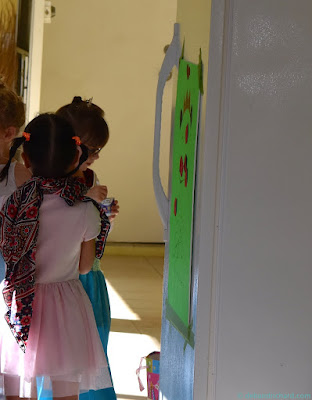 I think my favorite game was walk balancing a book on your head to practice your proper princess posture! It was cutest thing to see and their facial expressions are just the best! 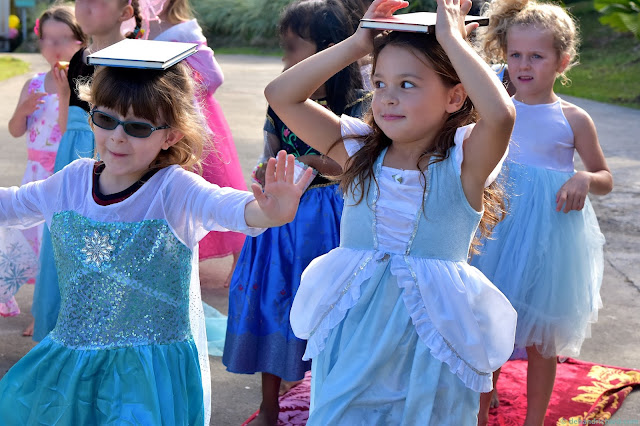 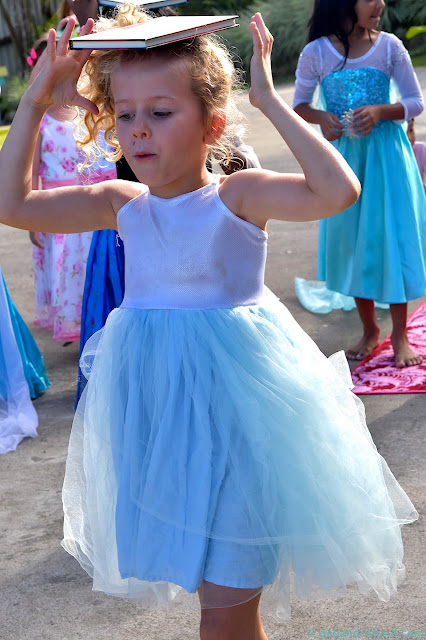 So what kind of cake do you make for an elephant princess birthday party?!?!?!? You don't!!! I made cupcakes and Clarissa picked out icing colors and we let the girls decorate their own cupcakes! 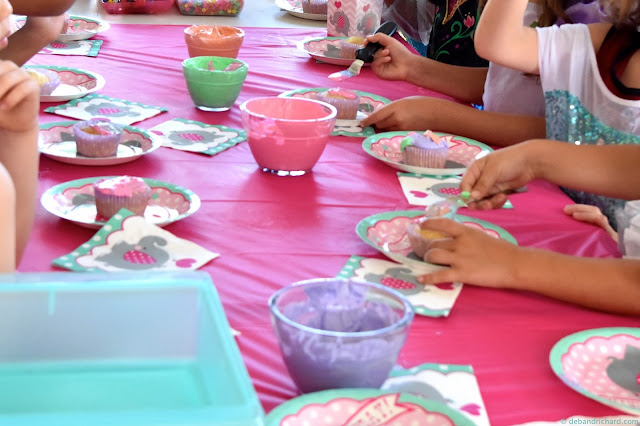 Note to self: remember to set the buttercream icing out at the beginning of the party...had to microwave it a few seconds to soften it up at cupcake time and another mom helped run it out to the girls while Richard was handing out the cupcakes...oops. 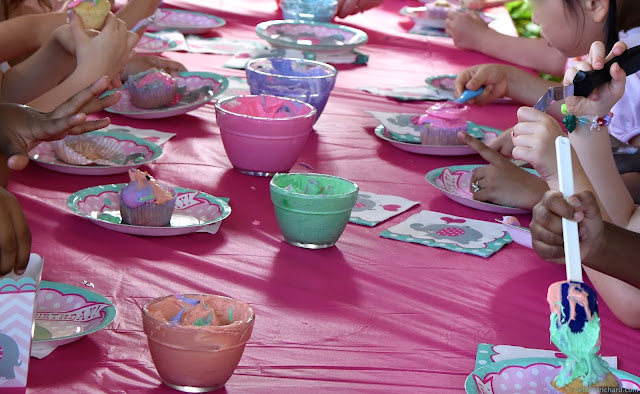 We also had sprinkles (or hundreds & thousands as they are called here), M&Ms, other types of sugar to fully complete the decoration process. Clarissa had been anticipating the decorate your own cupcake so much that as soon as she finished she inhaled her cupcake....I looked over and see this 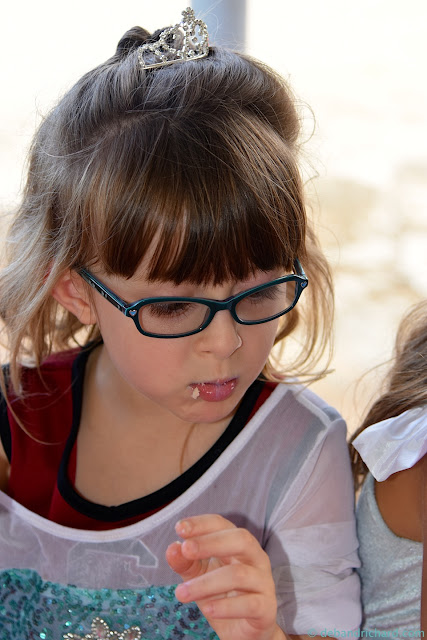 Lol....all the other girls were still icing....so I quickly grabbed the wrapper and told her to decorate another one but wait for us to light a candle/everyone to sing Happy Birthday. I was talking to a couple of the moms a few weeks later....they hadn't noticed....my secret is safe.....oh wait.... 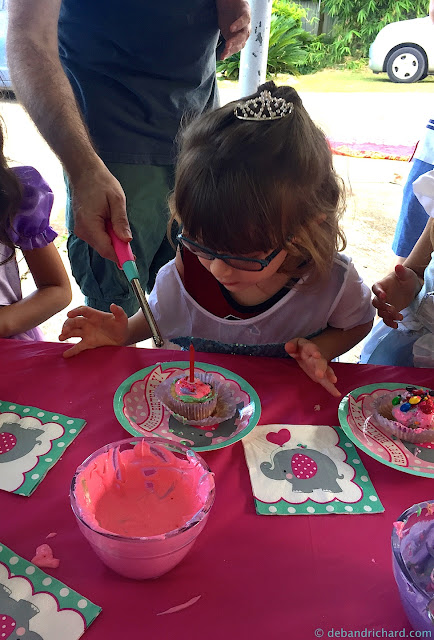 We had a nice sunny day with a lovely breeze which was great during the party.....except when trying to light the candle.....so she blew up out the lighter....it worked.....So in order to hopefully have a mom friend or two after the party, we did a scavenger hunt after sugar time cupcakes. 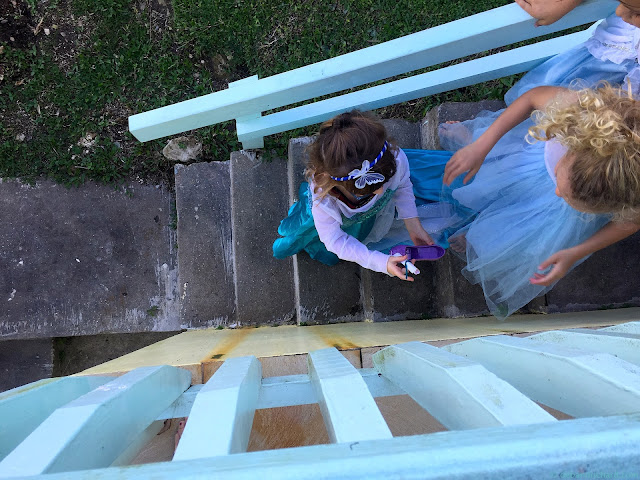 It was really hard to find outdoor princess related scavenger hunt clues online....so I had Mason help me come up with some (I've included them at the bottom of the post if you are interested in them). We did try to use things from movies/songs so the girls could guess them. We placed the clues around the yard so they were running back and forth {insert evil laugh}. Mason played scavenger hunt emcee and read the clues out to the girls. 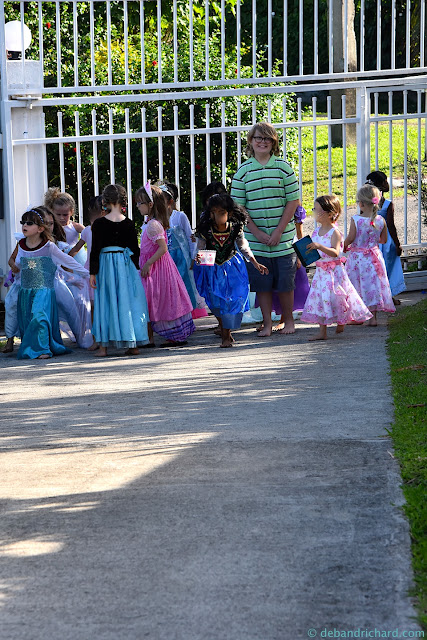 Following the scavenger hunt, Clarissa handed out the goody bags and then the girls played until it was time to go. Some had to leave early and few stayed and played a little longer. She had a blast and I hope all her little princess friends did too. 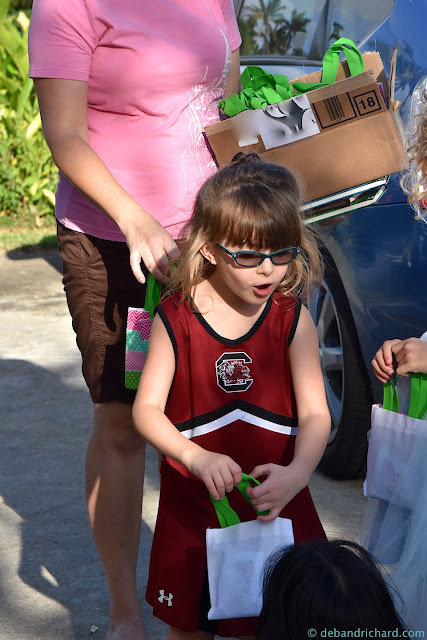 As usual....I apologize for some of the odd cropping or face blurring. I don't have all the parent emails to ask permission to post their darling's photos online....the kiddies you do see, I asked first. :) 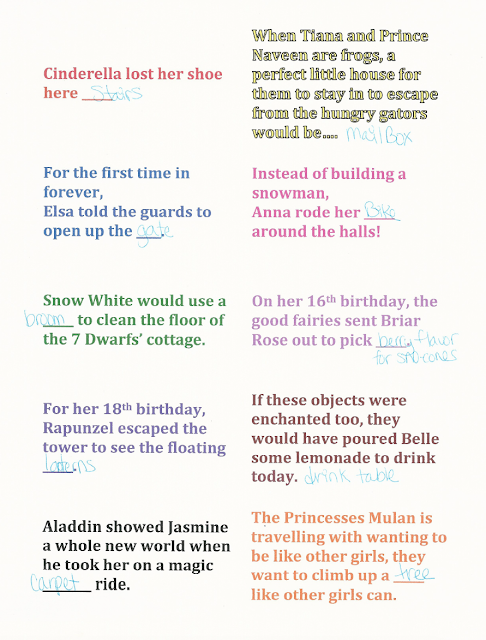