So after our first delightful resort weekend, I had decided I wanted to get away again for Mother's Day weekend. I had dove my first dive in way to many years the prior week (in my defense the diving in Charleston isn't all that great and we had been landlocked for the last two years) and my ears were still popping, so I wasn't concerned with great snorkeling for this adventure....I wanted nice sandy beaches and no cooking or unpacking to do. We have been told the nicest beach on Viti Levu (the island we call home) is Natadola Beach. A couple weeks prior to Mother's Day, we got an email for a local special at the Intercontiental Fiji Golf Resort & Spa at Natadola Beach. I forwarded the email to Richard and said book it for Mother's day weekend (hey...I wanted to do no work for "my" weekend!), we picked the kids up from school a little early on Friday (must maximize our beachtime!!) and away we went! 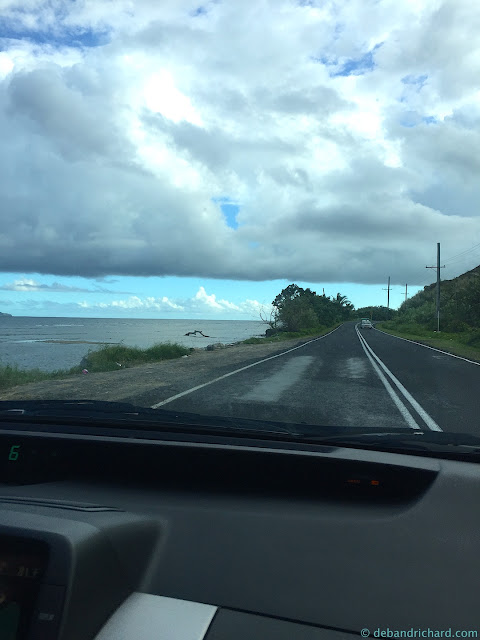 Parts of the drive are lovely like this stretch right along the coast. Other parts are super curvy mountain roads and while other parts are slow with giant speed bumps going through villages. There is one village we see some Momma and baby pigs crossing the road every time we drive through it! Given it was Friday afternoon, we hit a good bit of traffic as a lot of people head to visit family in other villages. The drive ended up taking close to 3 hours (we made it home in about 2.5), but being a left hand drive car in a right hand drive country makes passing tricky especially when you become the 4th or 5th car back.... 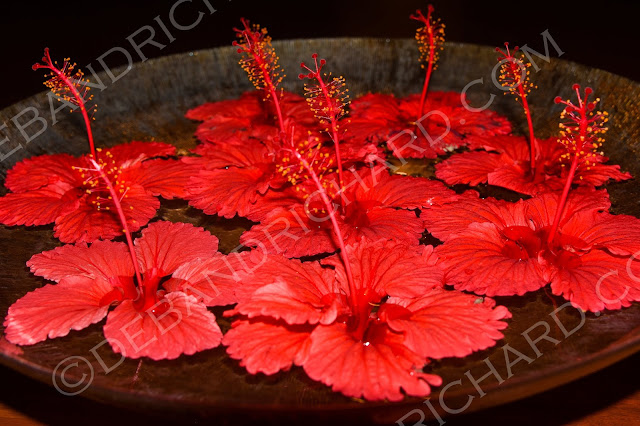 The welcome at the InterCon was great. The greet all guests with the Lali drum and shell leis. We were able to watch the sunset from a porch overlooking the Pacific while checking in among the beautiful flower bowls. They then shuttled us to our room. We dropped our stuff and went to find something to eat. We choose to eat at a cafe by the infinity pool and enjoy what was left of the sunset. 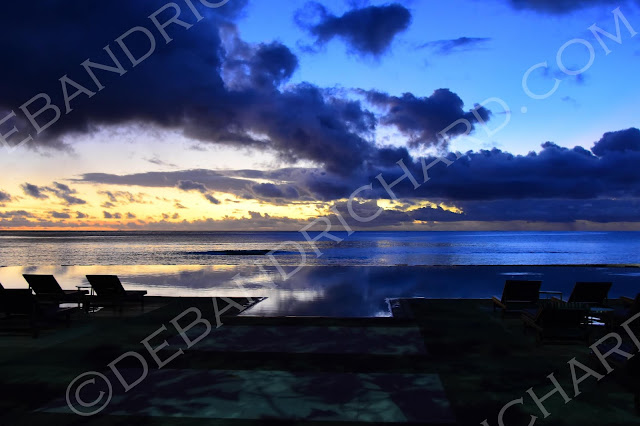 Afterwards, we decided to go check out the beach. Clarissa was smart and put on her swimsuit. Mason was too cool for that and wasn't going to go swimming....


Well you see how well that turned out...lol. We didn't get any pictures of the room, but it had a true garden tub with the bathtub outside on the back porch which was somewhat buffered by a garden. I did pull the curtains across to provide the kids with a little privacy. I had headed back with Clarissa before the boys came back....she was being difficult cooperating with washing her hair....which Richard said he could hear from a good distance away....ooops....

The next morning was beautiful. Richard and Clarissa went for a walk before breakfast to pick up dropped flowers and check out the beach. 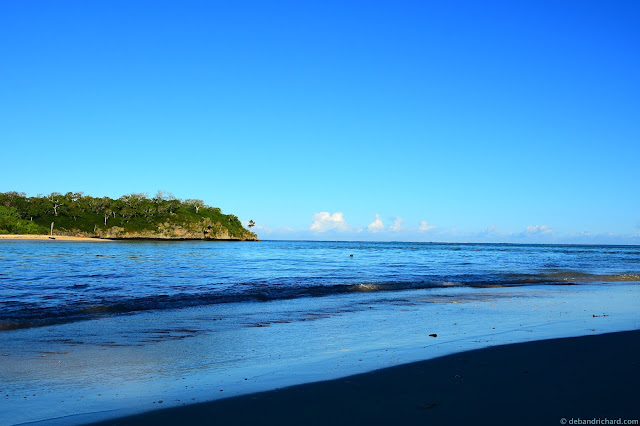 They found a beach access closer to our room....it was along an inlet and across the water were some cave looking structures. After we dragged Mason out of bed, we headed to breakfast. Our room rate included the breakfast buffet....we were super impressed with breakfast. Yum! Everyone found lots of options that they liked. We told everyone to eat up since we were planning a late lunch. 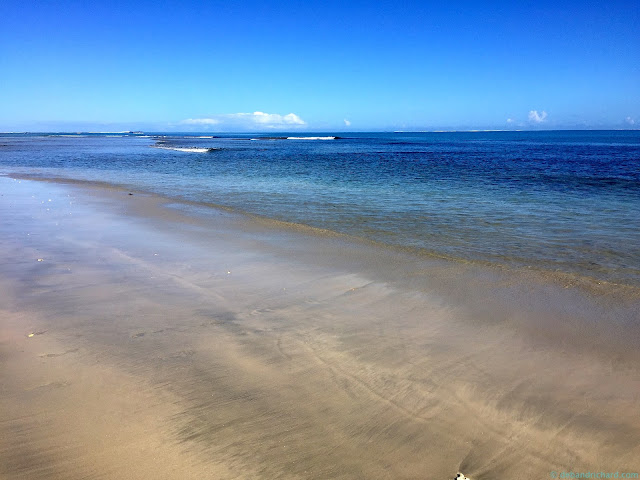 Next we headed down to the beach to play....since that was the goal of the trip! 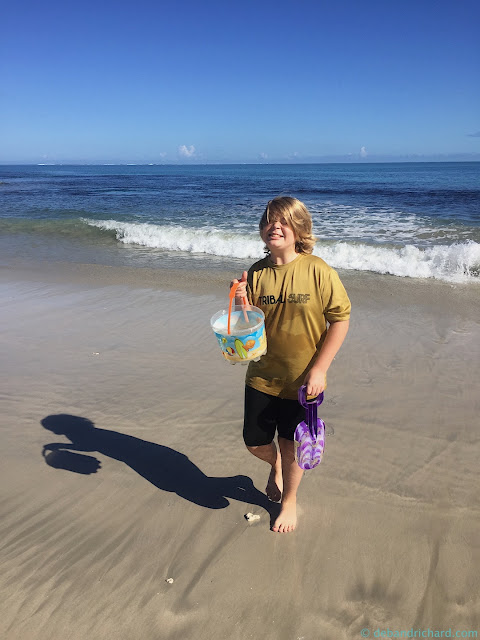 Lots of sand visible (and still hours away from low tide) and so many shades of blue. 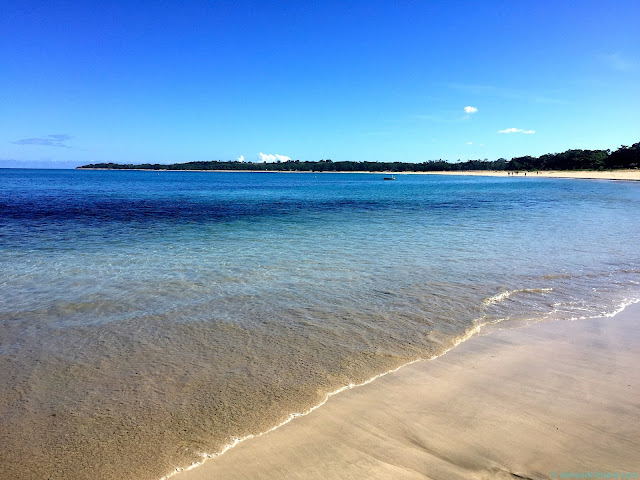 Clarissa and I worked on a sand castle and the boys went walking/exploring a bit into the water. 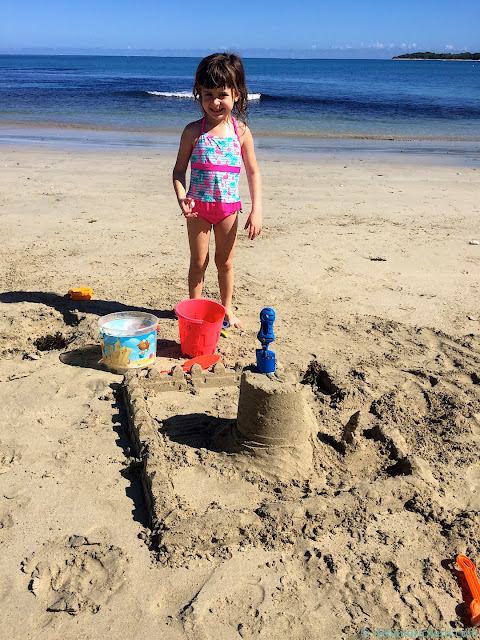 I quickly got summoned to identify what kind of marine organism that was everywhere...... 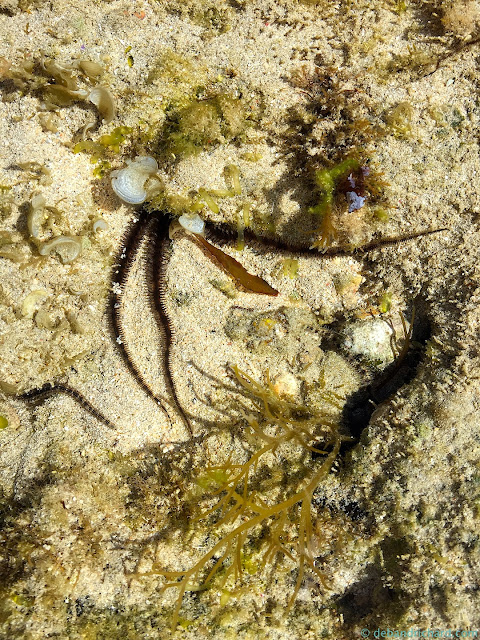 So quiz time.....remember what it was? I posted photos of the kids with the mystery animal a few weeks back...brittle stars! 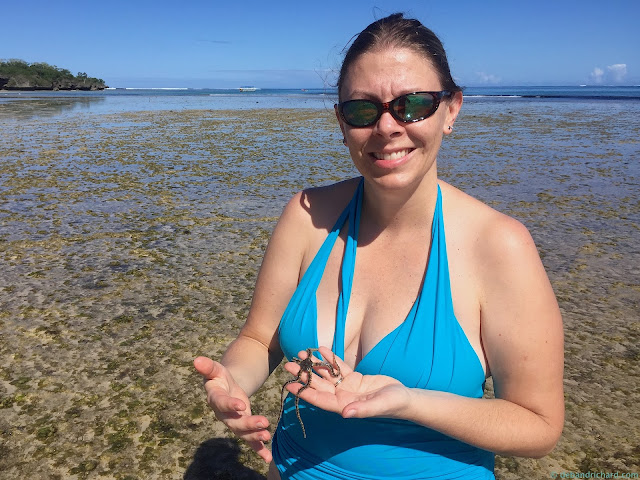 Clarissa got over her initial 'eeh, its prickly' and started picking them up. I told her to only get ones where you see the main body portion as a lot where hiding in tiny holes and crevices getting ready to really hunker down for low tide.


I seriously could of sat here all day and not gone anywhere.... 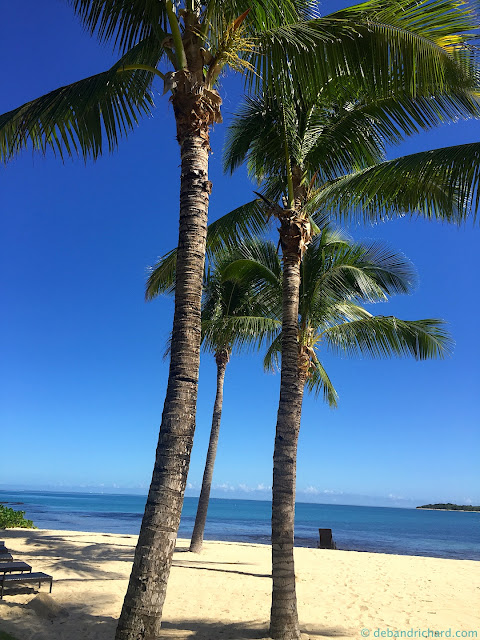 The pool was beckoning the kids with all of its fountains, water jets, and ledge/seats....so much to explore. 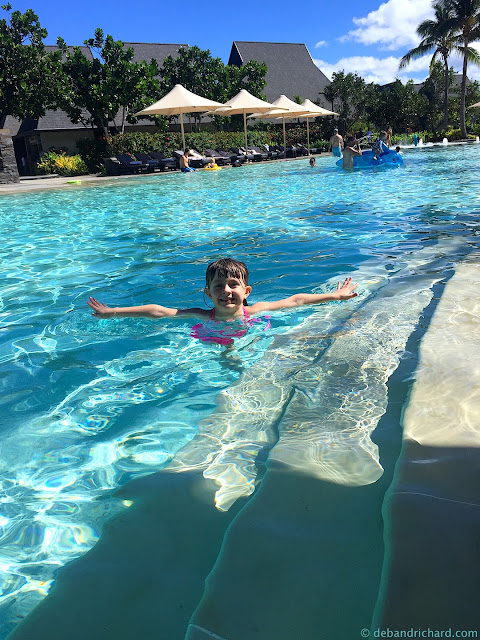 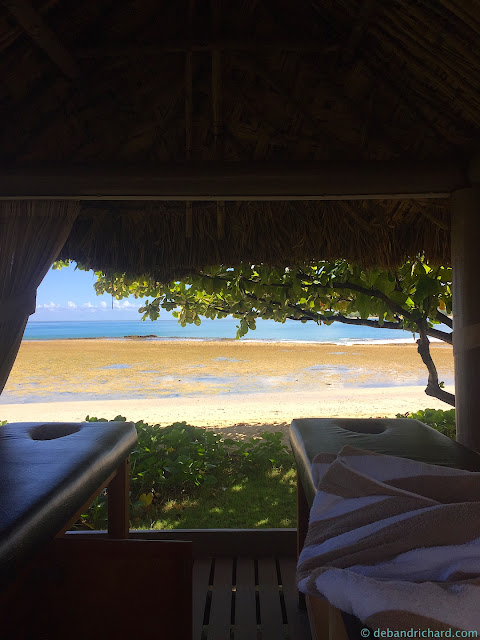 While I was getting my massage, Richard got the kids and himself showered and dressed. I then did the same. We then headed out for the afternoon in Nadi. Other than landing and chilling in the airport for about an hour, we haven't spent any time in the other major city on Viti Levu. On the way to the car, the kids picked up some handicrafts they had seen before breakfast for sale by some local ladies. Clarissa got a bracelet and Mason got a mini Lali drum. While waiting for the valet to bring up our car, Mason had some Lali drum lessons on the big full size drum....apparently the beat is not as important as the big Bula at the end....


So we went through Nadi and out to Port Denarau. At the port, they have a shopping center that includes a Hard Rock Cafe, in addition to boats that will take you out to the Yasawa & Mamanuca Islands....which we will venture out to at some point. We had lunch at Hard Rock Cafe. Richard was a little disappointed they were not serving any American beers, but otherwise we were all hungry and cleaned our plates....it was good and tasty. We then walked around and did a little window shopping at the souvenir shops...much to the kids' displeasure...we have 2 more years we do not need to buy it all now. We then headed back to the InterCon and made it back just in time for a spectacular sunset! 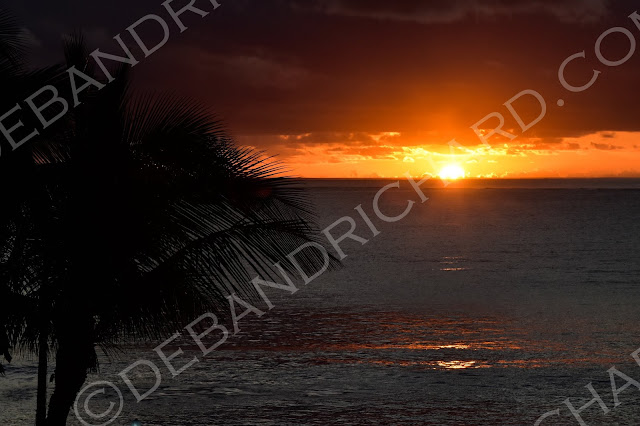 I attempted to get a nice picture of the two of them....seriously how hard is it to "smile nicely"....apparently insanely hard! 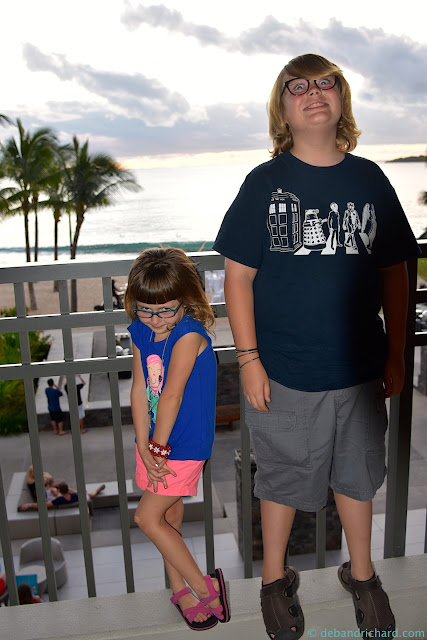 These are just a fraction of my failed attempts....I finally gave up! 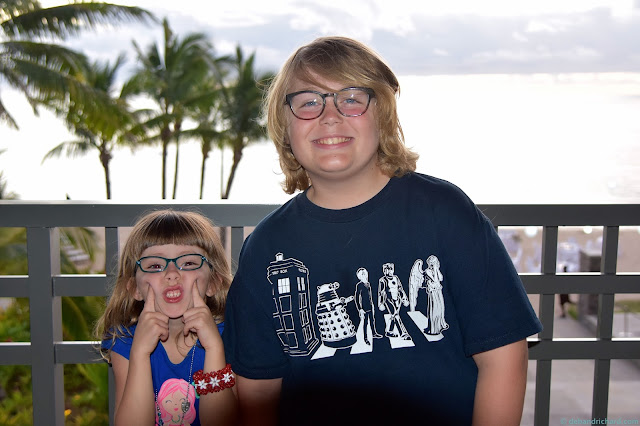 And so we went down and "played" chess. Mason knows how to play chess, but Clarissa does not and was not following his directions.....eventually we found our way back to the pool for the rest of the evening. 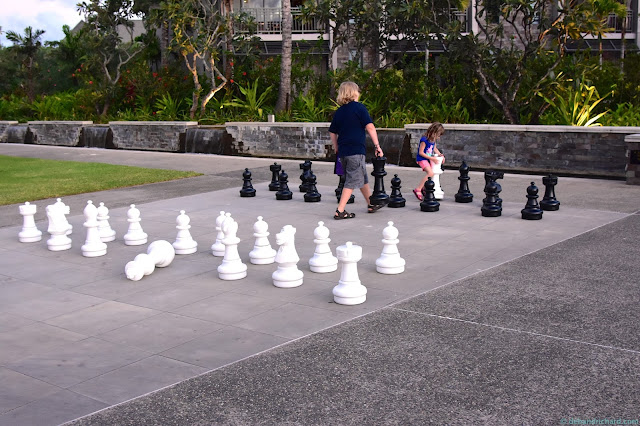 The next morning after another delicious breakfast and requesting a late check out (benefit of being an IHG member...woohoo), we took the kids to the Planet Trekkers, the kids club. They have set drop of and pick up times, serve lunch (or dinner depending on what time slot you choose), and it does cost per session. The kids were a little hesitant after the last experience....but with a little bribery we convinced them to go. They both said they had a blast....so I guess lesson learned is you get what you pay for.... 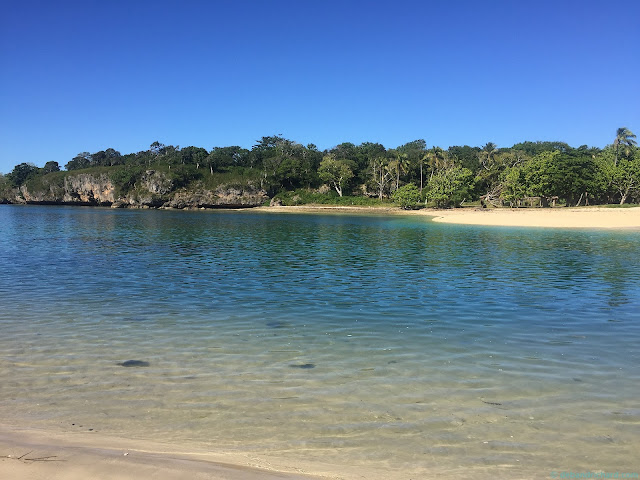 So while the kids were being entertained and since it was Mother's day, I played the let's do what I want card....lol. So we walked along the beach and I picked up a bunch of pretty shells (Richard found a few of them also). 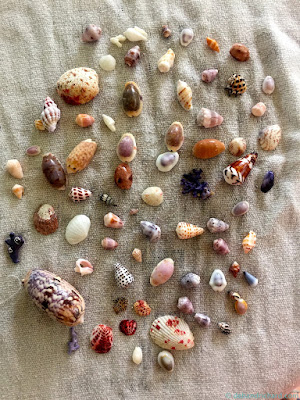 We then headed over to the adults only infinity pool. 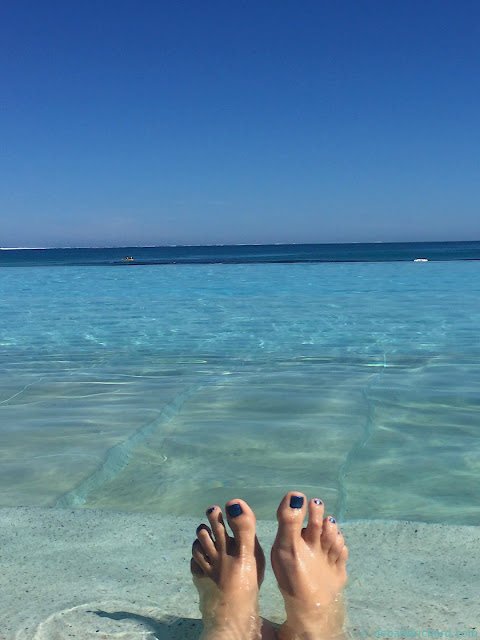 We noticed as the tide went out it was looking more and more doable to walk over and explore the caves. While relaxing in the infinity pool we even saw a few people doing just that. So we walked on over, on the way we found this pretty polka-dotted little fellow. 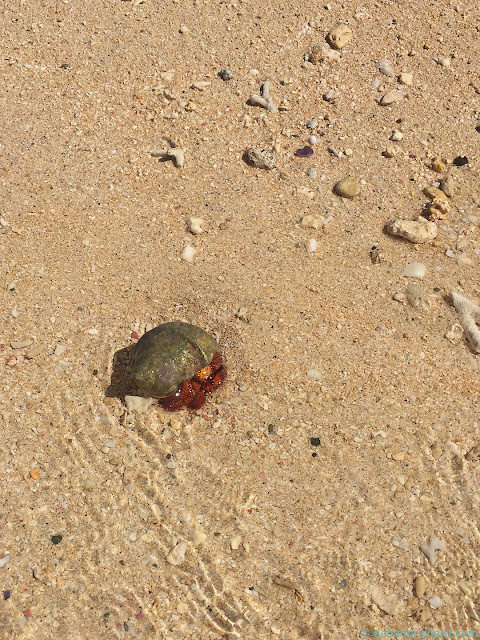 There were some strong currents towards the middle of the passage of the inlet, but since we hit it close to low tide the water never got much higher than knee deep. It was doable for us, but it would have been tricky to also help the kids navigate across since you couldn't really see where you are stepping and we didn't think to bring water shoes so stepping on shells and broken coral bits hurts a bit. 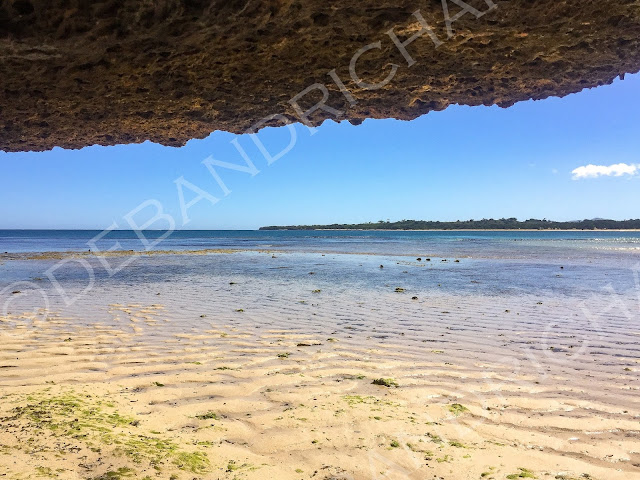 We could hear crickets chirping as we walked around. 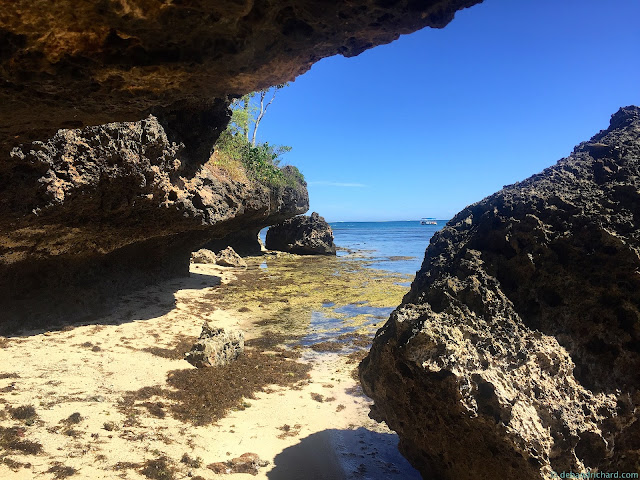 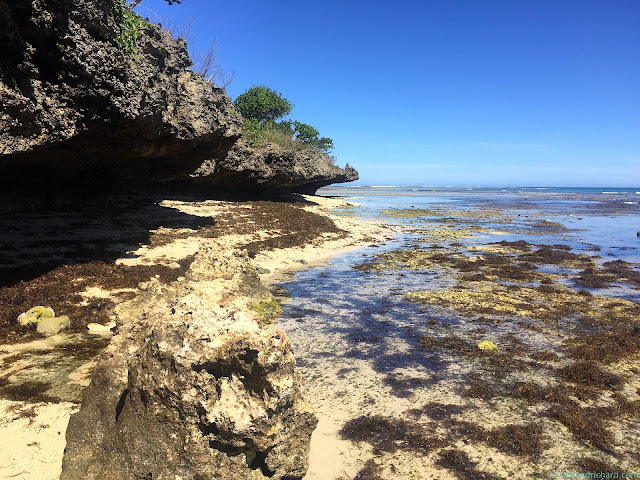 Richard was disappointed we didn't find anything super interesting in the tide pools...he was hoping for an octopus or something cool. We did find an anemone which I finally convinced him to touch...still not impressed. 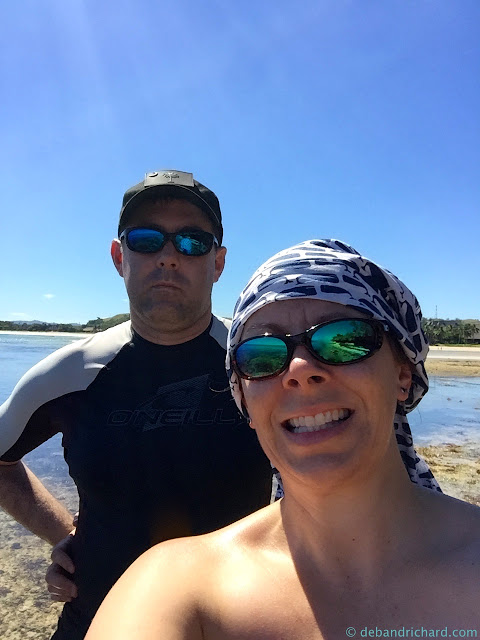 Afterwards, we made it back across the inlet, had some lunch (including fresh tropical smoothies), got cleaned up, packed up, grabbed the kids, checked out, and drove back home. It was a very fun relaxing weekend. With this view and the tasty food, we have already another trip back in the works... 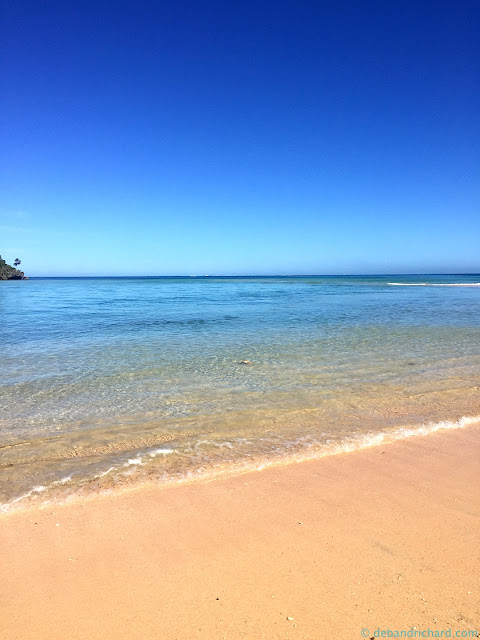