Our second day in Dubai, we got up early and were picked up by Platinum Heritage Tours. On our way out to the desert our guide told us the benefits UAE citizens receive from the government (you know healthcare, education, salary, huge home, etc....the usual....lol...btw the only way to be a citizen is to be born to two parents that are also citizens). Our guide told us about how camel racing is a very big money maker among the Bedouins (the formerly nomadic desert tribes people). The winner of a race receives a Land Cruiser as a prize. They can later take their prize and sell it for the cash.

We were able to watch the beginning of a race. In the past, camel jockeys were children between 3 & 7 years old (I can not even imagine Clarissa having the ability to jockey a camel at her age), but due to injuries/deaths they now use electronic jockeys. A remote controlled device with riding crop is placed on the camel. The owner then rides next to the camel is his truck/SUV with the controller. Keep in mind there are about 20 or so camels riding per race.....so you have all these trucks racing next to the camels (I will show you some aerial views of this from our hot air balloon ride in another post). Here are some camels getting ready for their race. 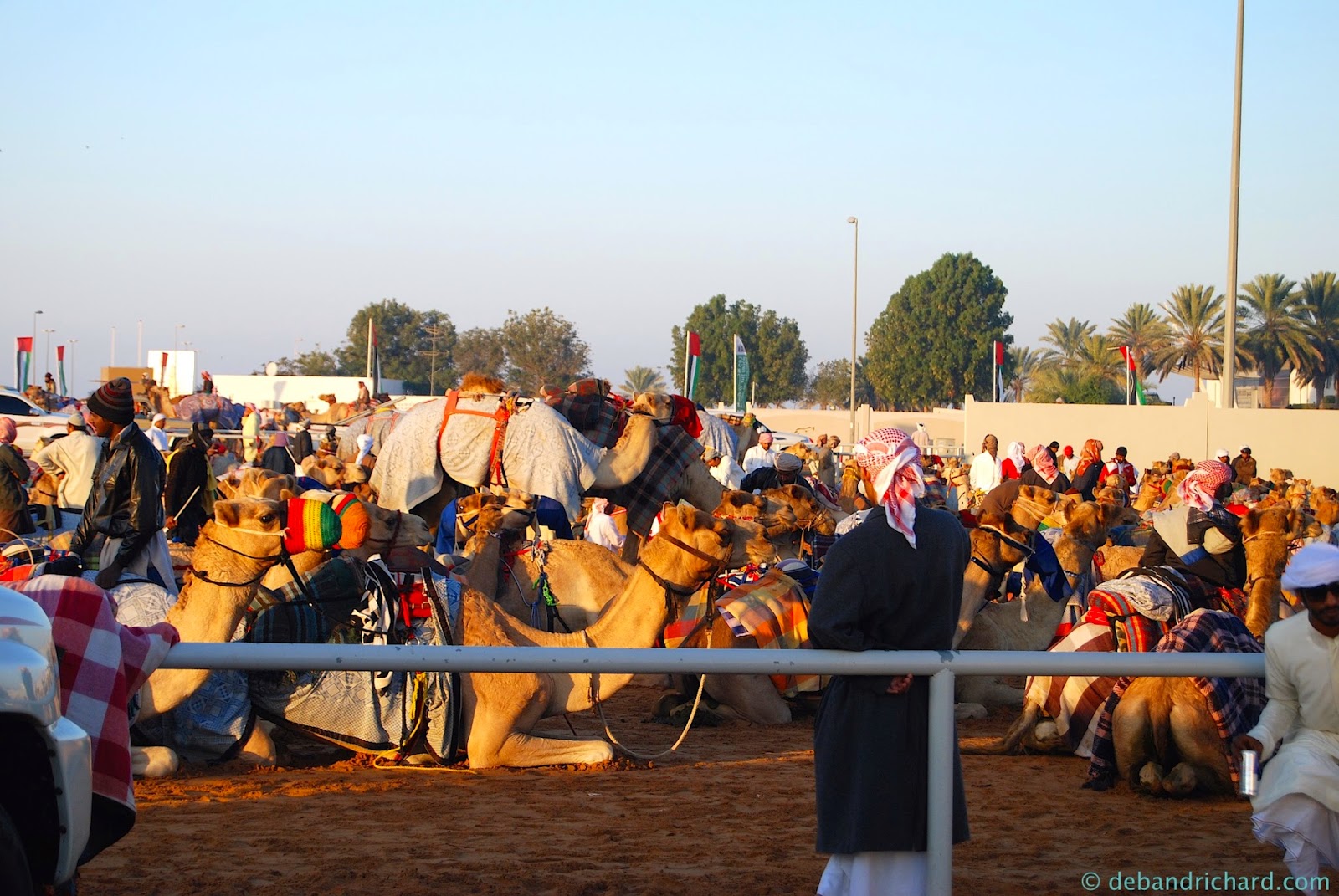 We continued out to the Dubai Desert Conservation Reserve. We opted to do the 'Heritage Wildlife Drive and Bedouin Breakfast', which began with our talk with the Bedouin. We put on a keffiyeh (Richard) and a hijab (Deb)....it really helped control my hair with the wind while driving through the desert in our 1950s Land Rover.... 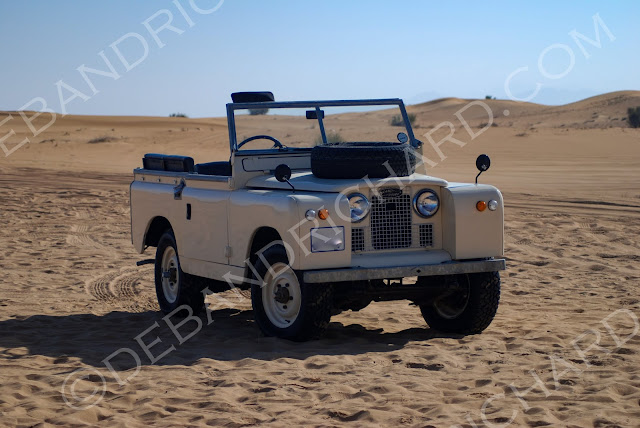 and headed through the desert to a camp in the Royal desert retreat. As you can see, the sun was still rising.... 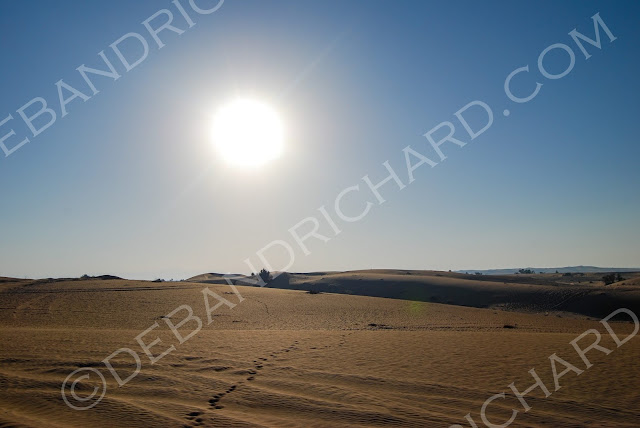 We were first offered Arabic tea and dates while we waited for the Bedouin to arrive. 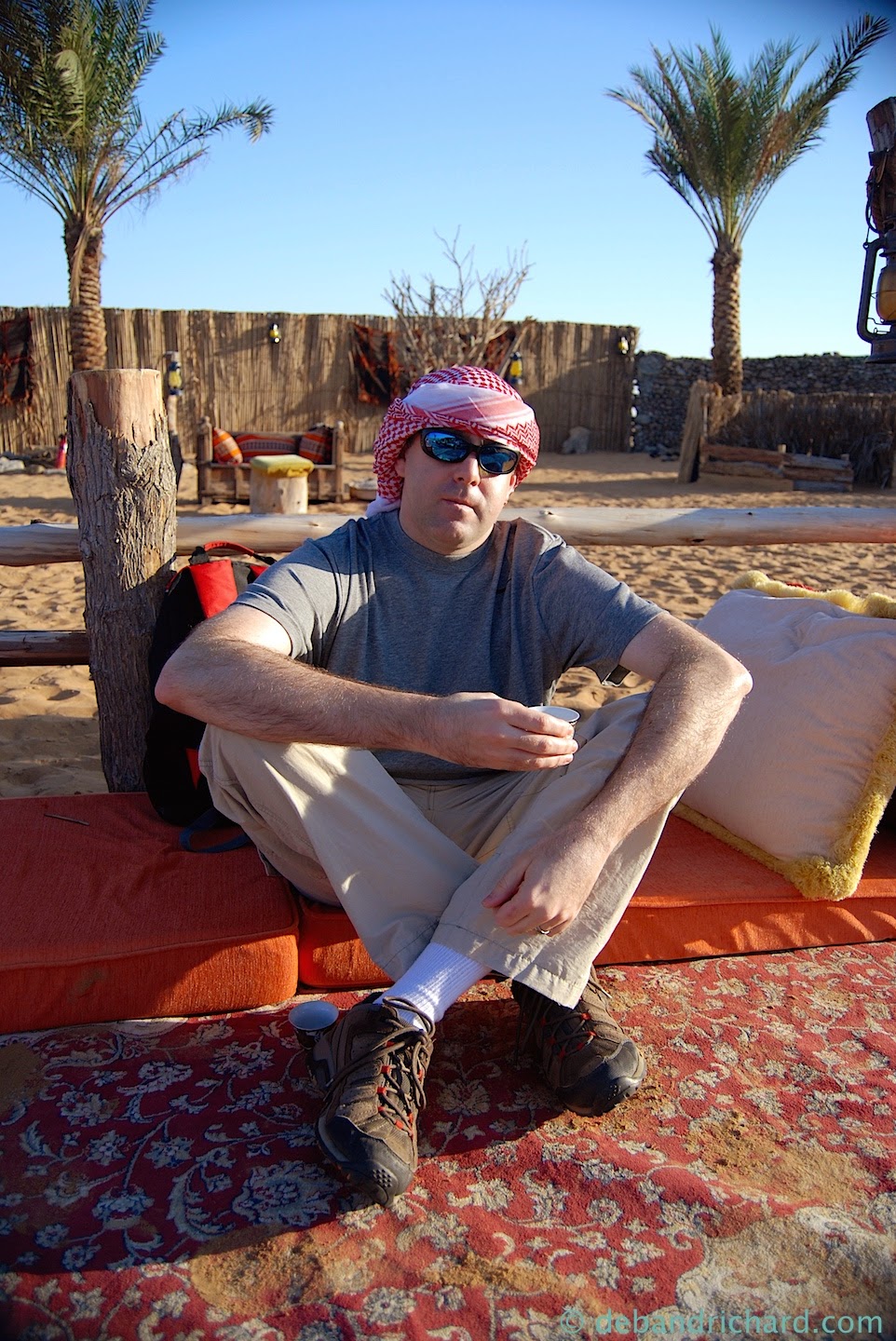 We were told the Bedouin was born in the winter time and was somewhere between 65 & 75 years old. He did not know exactly how old he was. Before the UAE became the UAE in 1971, the nomadic tribes did not use calendars or lug around written records from camp to camp, so nobody knows exactly when he was born.  He told us (through a translator, he only spoke Arabic) that they would move as frequently as every couple months to sometimes staying at the same camp for couple of years. As a child his only education was learning to read the Quran and his job was to care for the family's camels. He also told us about tribe weddings and he does like how things have changed in his lifetime. 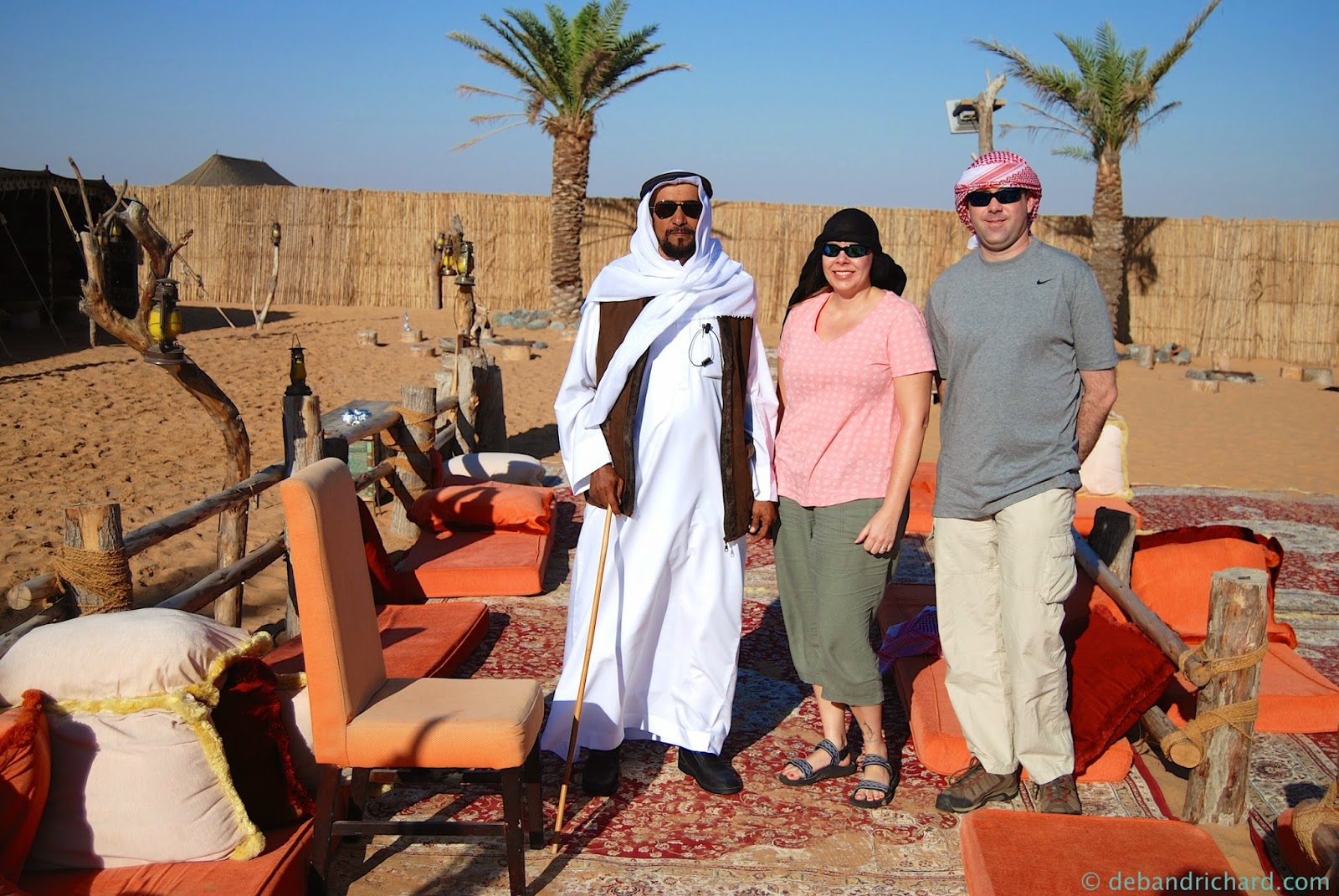 After the chatting with the Bedouin, we partook in a traditional Emirati cuisine underneath a tent in the camp. We had pancakes served with honey or date syrup, noodles cooked with eggs and sugar, chickpeas, and raqaq (flatbread) filled with either eggs or spices. The thing that pleasantly surprised both of us was how good the chickpeas were. They were heated in some sort of broth and didn't have that grainy texture you usually associated with them. 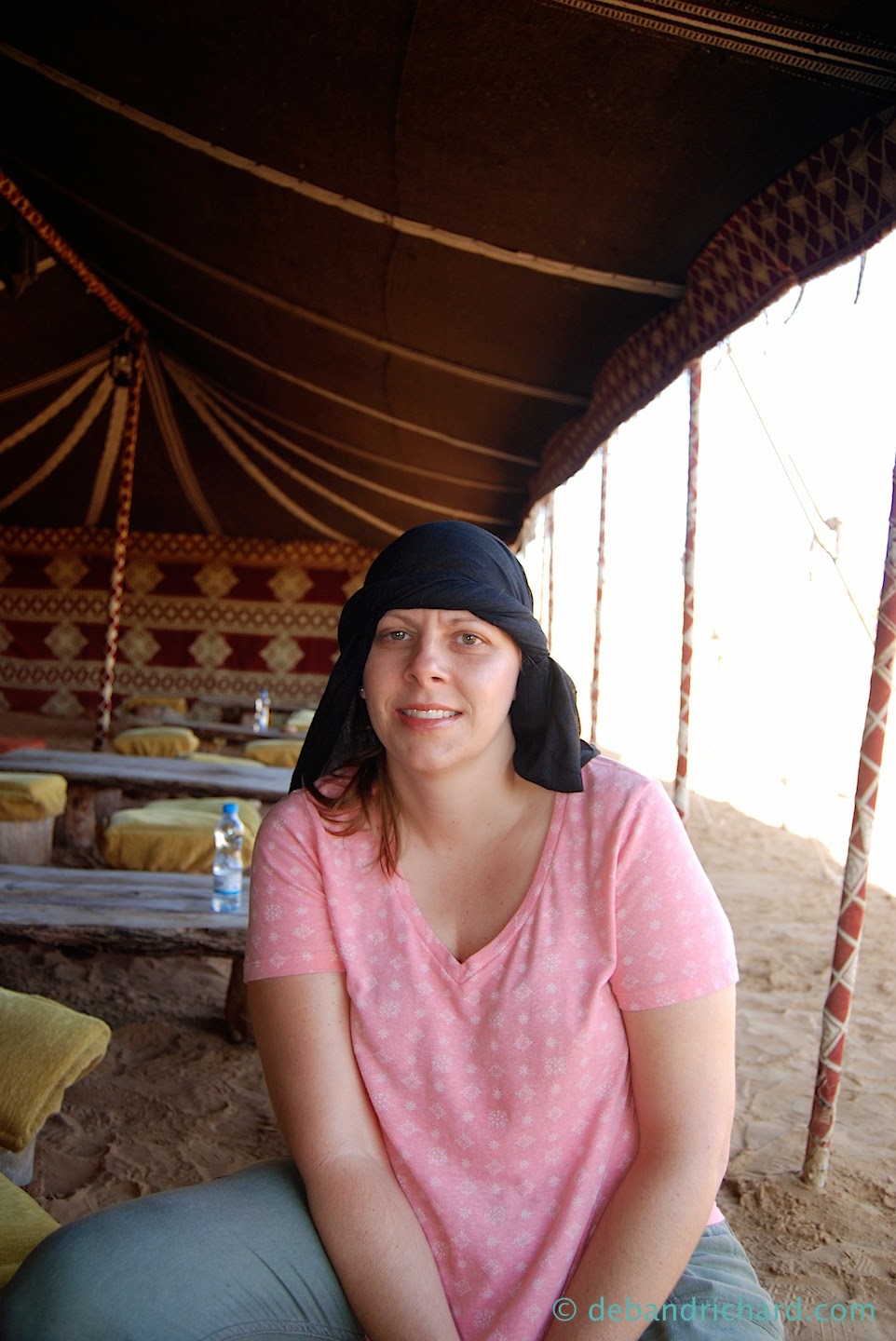 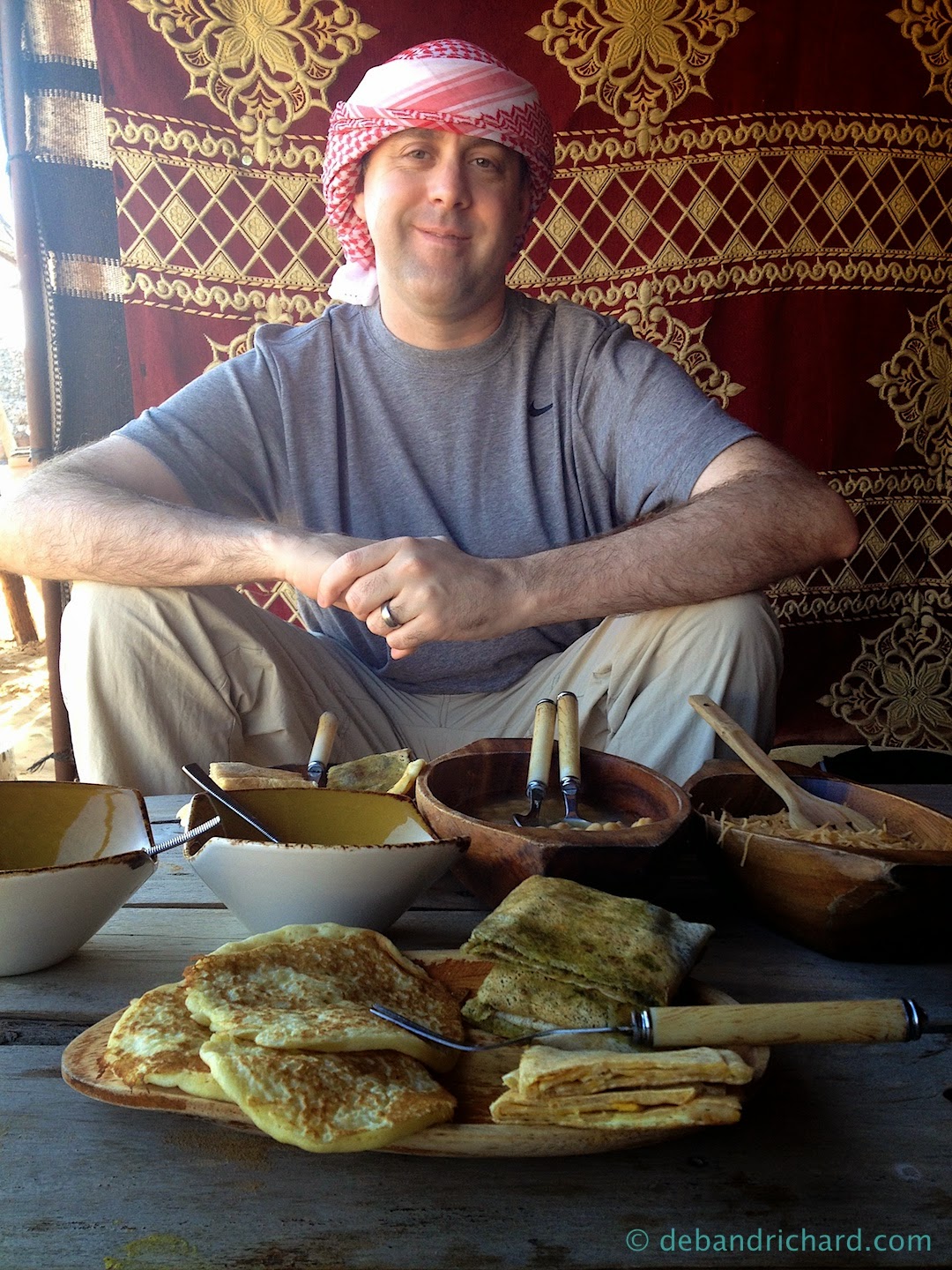 After breakfast it was time for our camel ride!

Richard as the camel was standing up (I think when they sat down was more exciting). 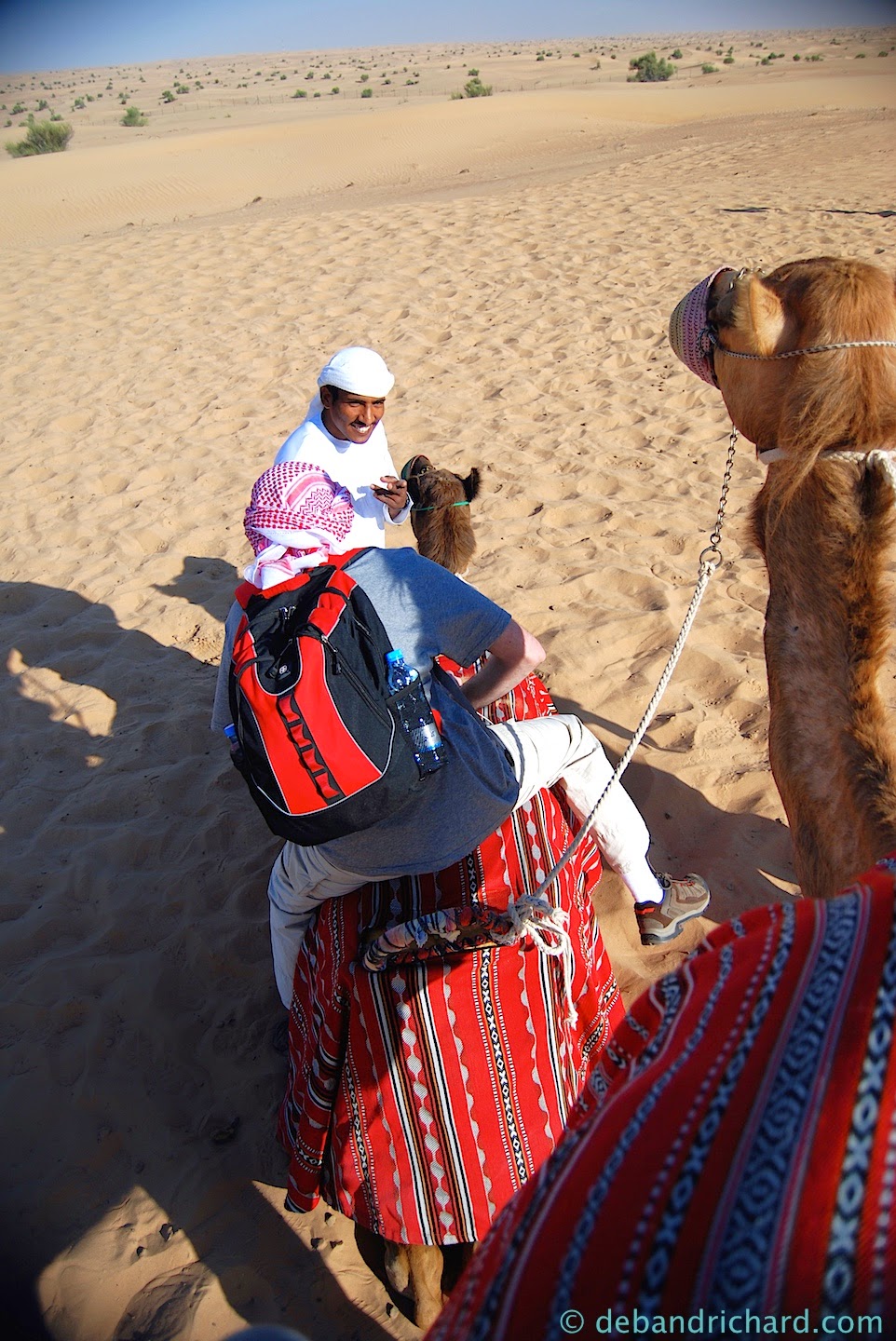 Cool shadows in the sand.... 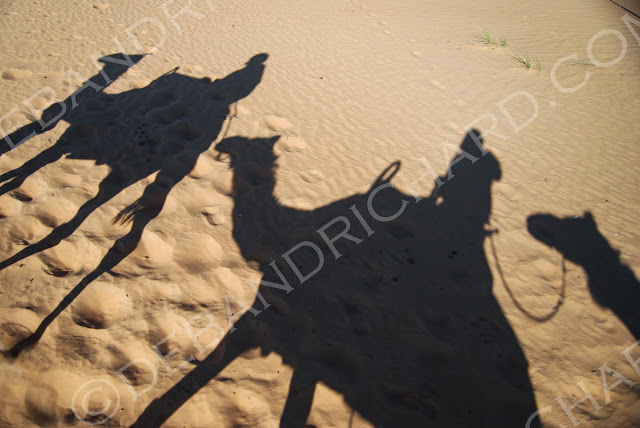 Traditional tourist photo....the man leading the camels stopped them and offered to take our photos. My camel took a liking to Richard who appeased her with head scratches. 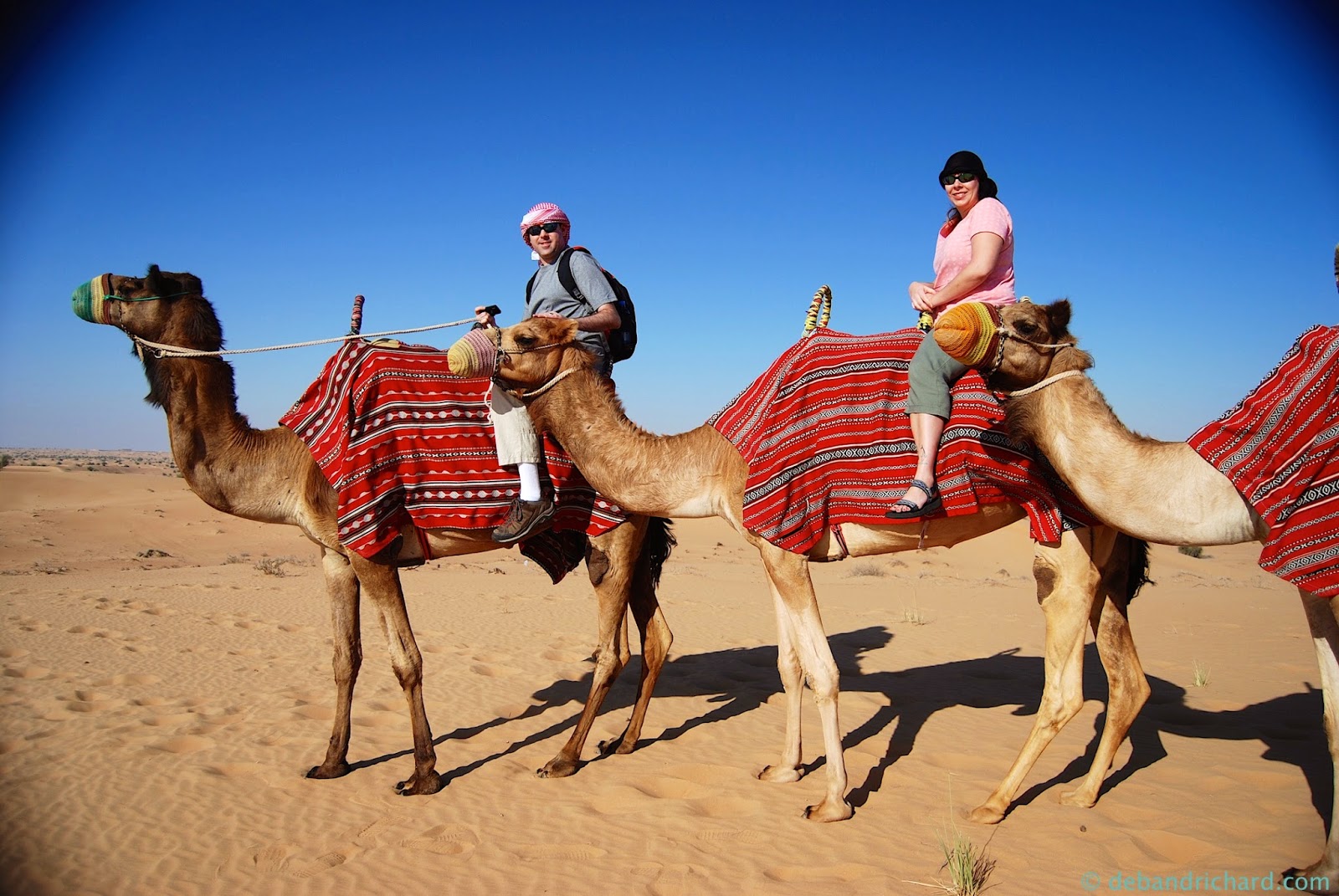 The Bedouin told us that when they were moving to a new campsite as a tribe. The women and young children would be loaded up onto the camels, while the men would walk and lead the camels. 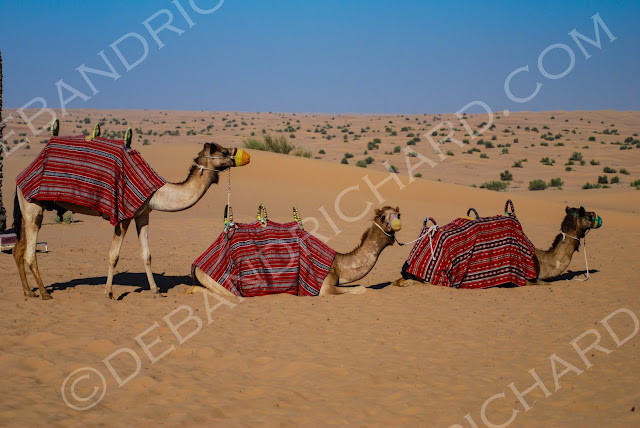 Following the camel ride, it was time for our drive through the Dubai Desert Conservation Reserve. 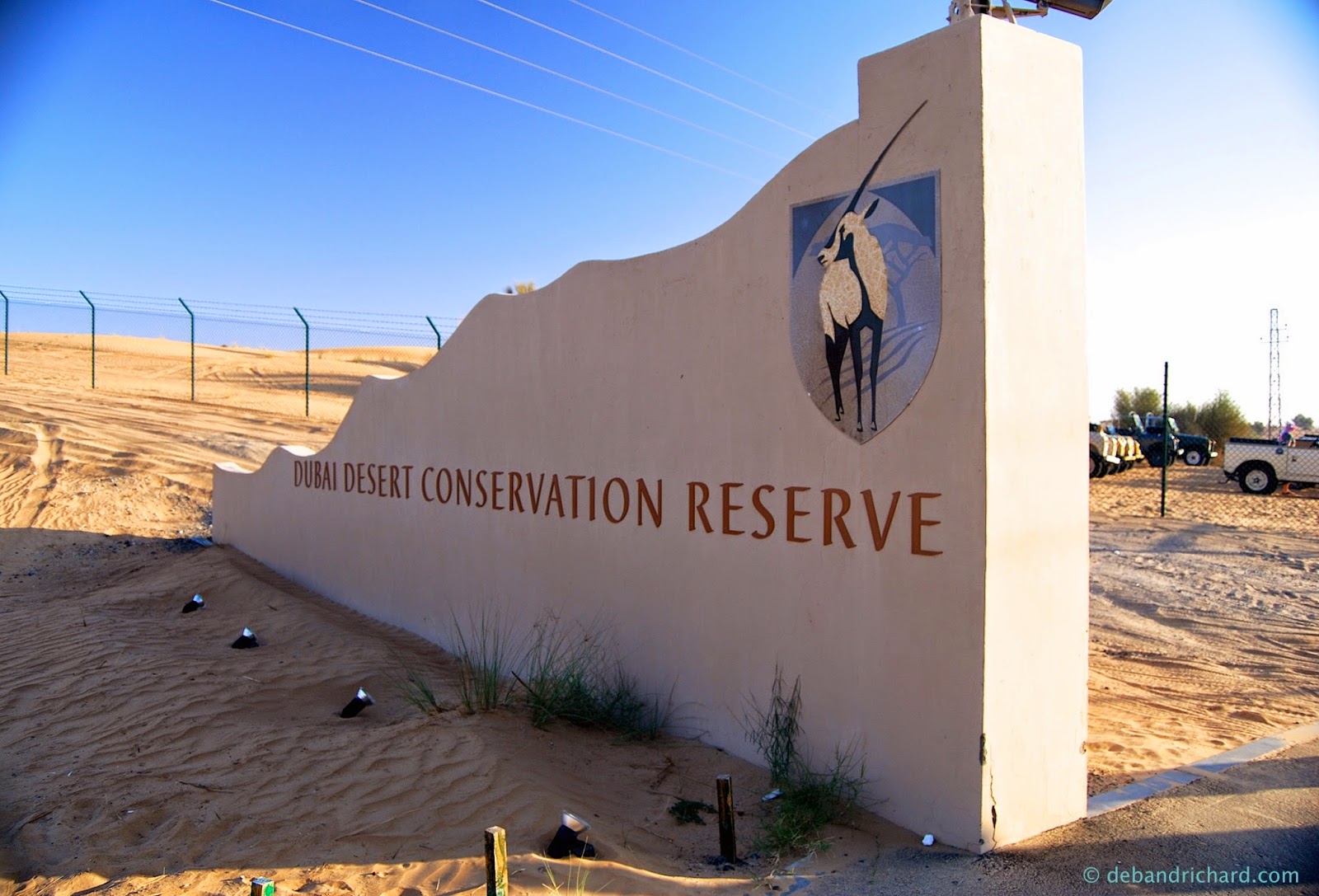 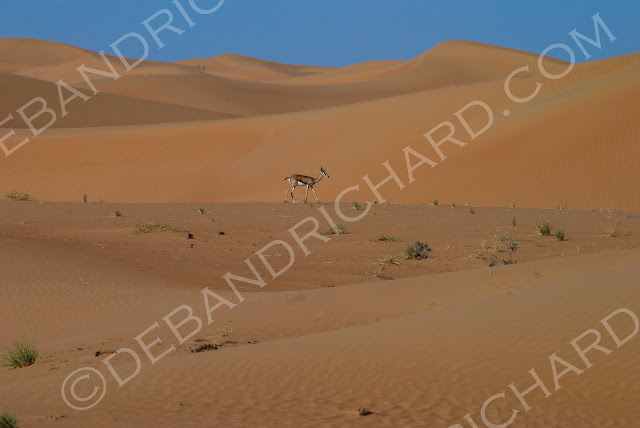 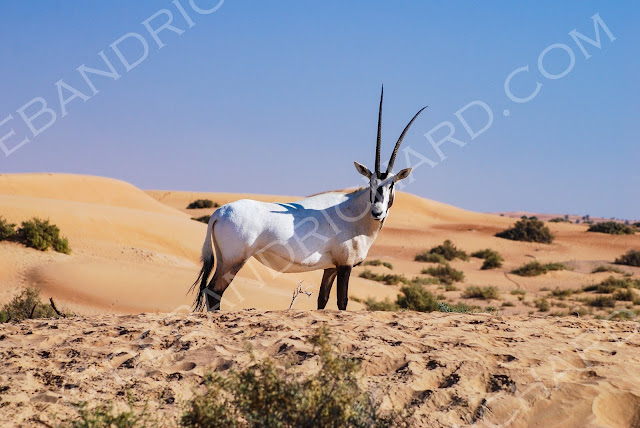 Our guide did not know what type of bird this is, but I am thinking it might be a Crested Lark. 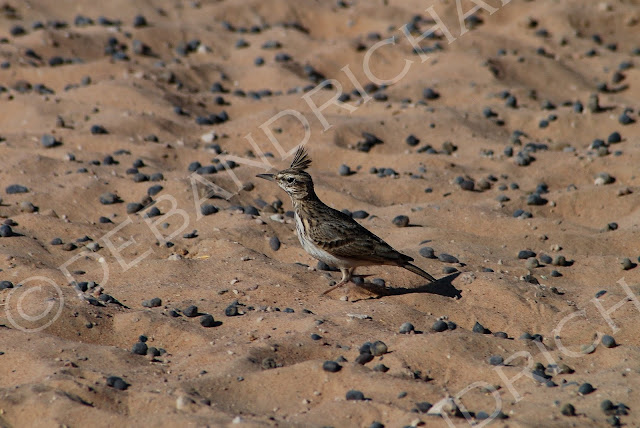 We did not see any cats or lizards though. Cool moon shot near a watering hole. 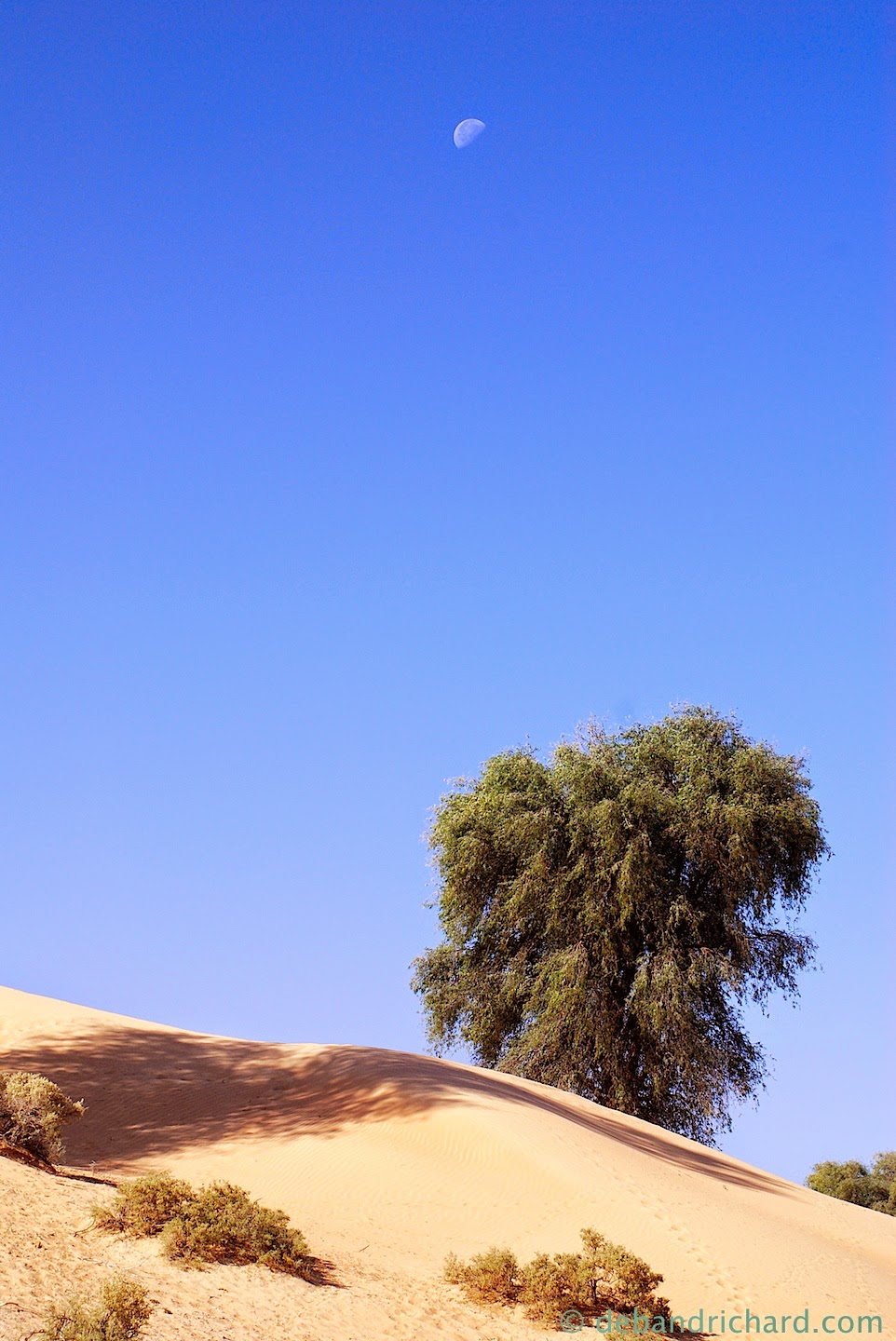 On our way back to the hotel, we passed trucks transporting camels. It was very novel to us and we'd chuckle when a camel would poke its head up and look around. 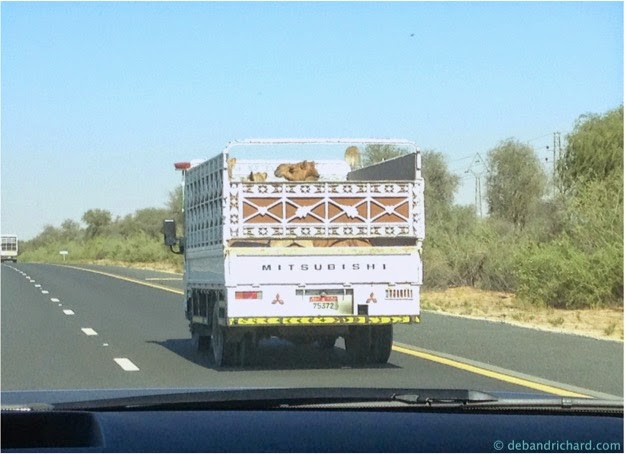 That afternoon, we headed over to the Mall of the Emirates. This mall, while not quite as large as the Dubai Mall, was huge as well. It had a Carrefour that we had to check out (and I got some strawberries and seedless grapes to snack on...sorry Mason). Ski Dubai, an indoor ski resort, is there too. We couldn't find a viewing area to watch the skiers but they did have a kids play area, complete with Frozen ice sculptures (and every possible Frozen movie toy you could think of). We found another huge 2-story toy store....with some lego sculptures.... 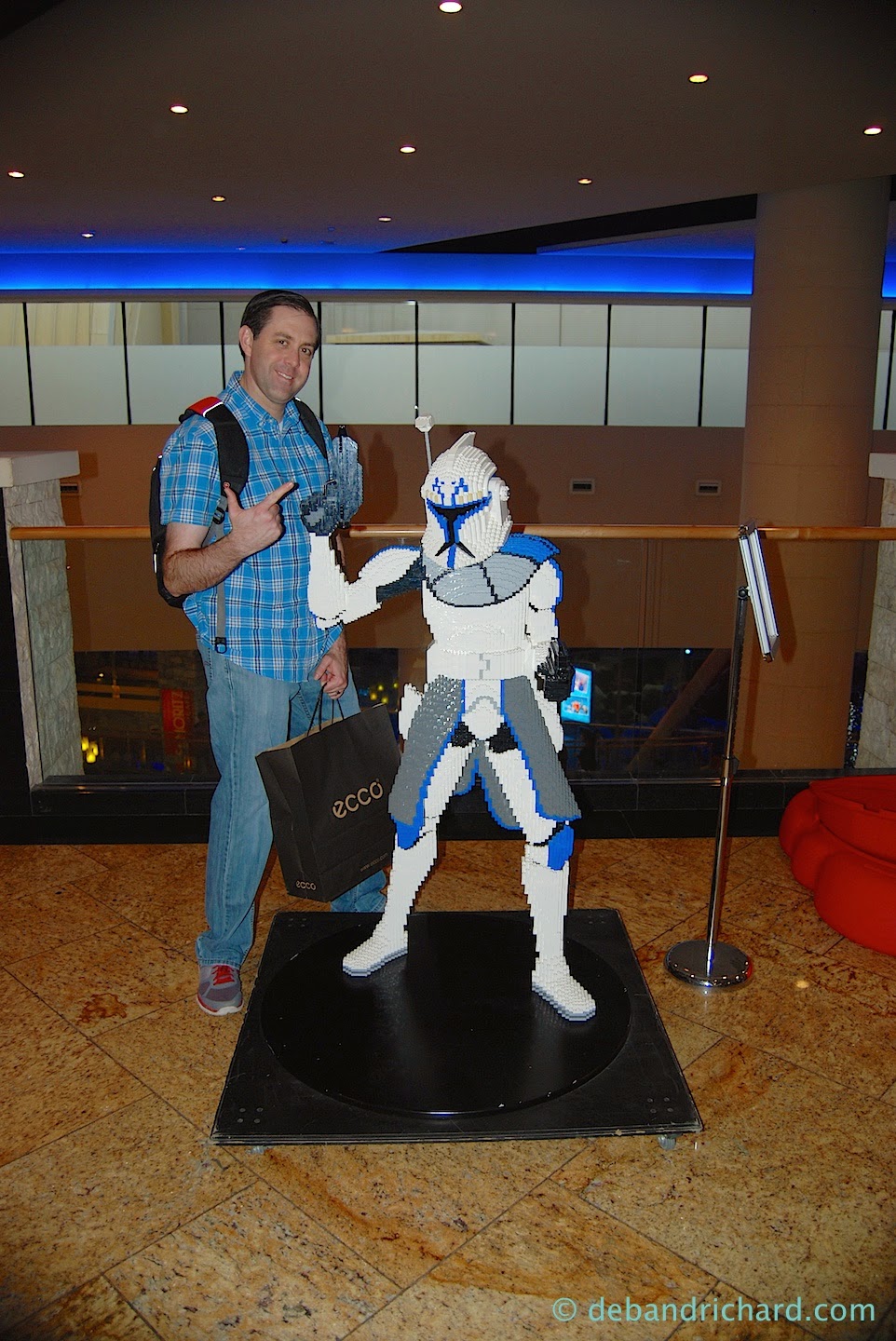 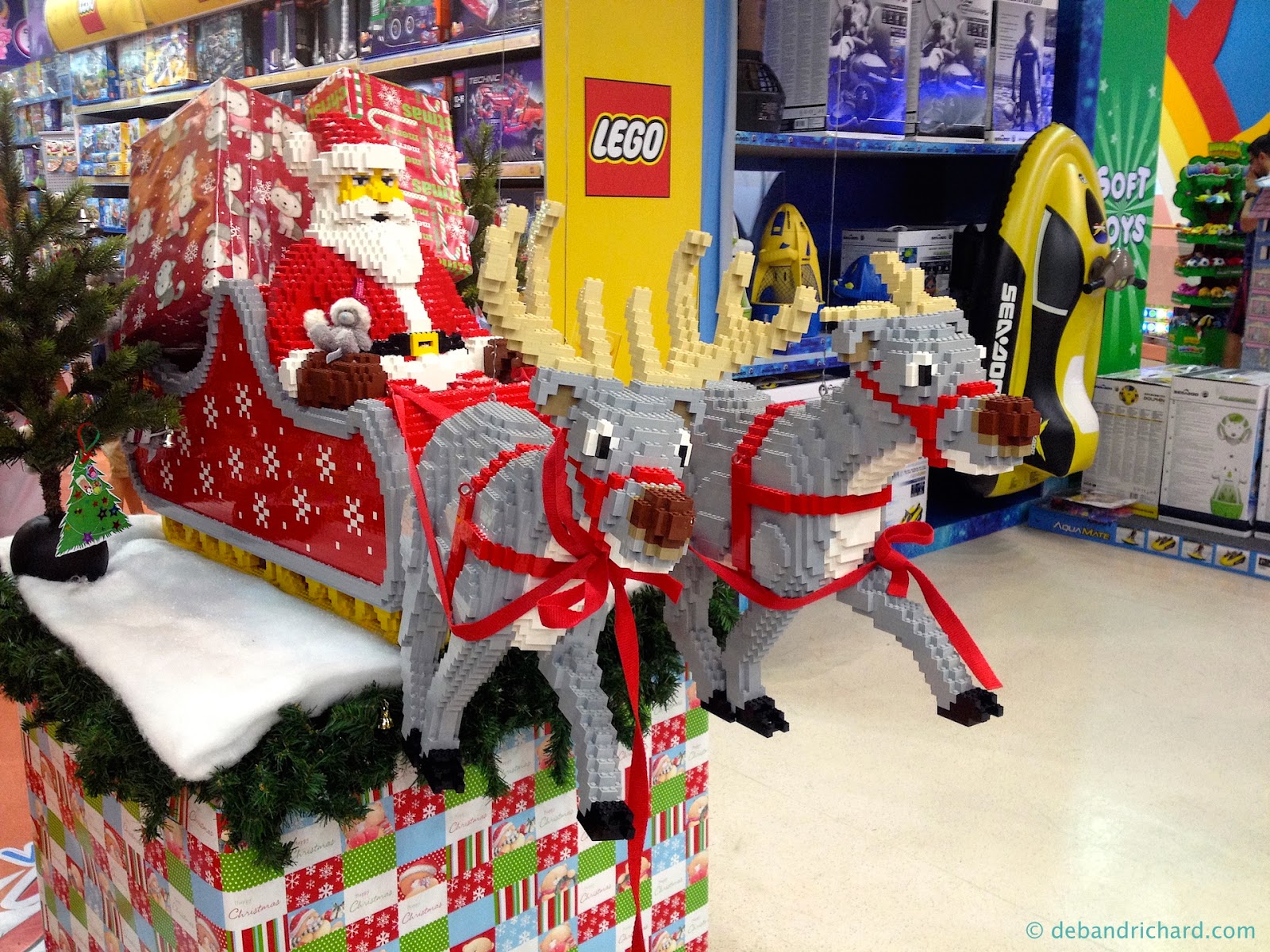 The desert safari was a blast. We've already talked about coming back (and bringing the kids next time) and we will definitely take them on a safari. They also offer a night time safari with star gazing and nocturnal animal exploration (apparently camel spiders will attack when a light is shined upon them).....
Posted by Deb at 1:51 PM