On the 4th day of our Mason & mom trip in Svaneti, we headed to the Koruldi Lakes with our group. Our passenger vans were replaced by 4-wheel drive mini van like vehicles. We headed back across the Mestiachala River. We then proceed along a car trail (calling it a road is too generous). A handful of families live up in this area during the summer.

Our first stop was a mineral spring. We passed on the water (not feeling adventurous that morning) but it was a nice vantage point of the area. 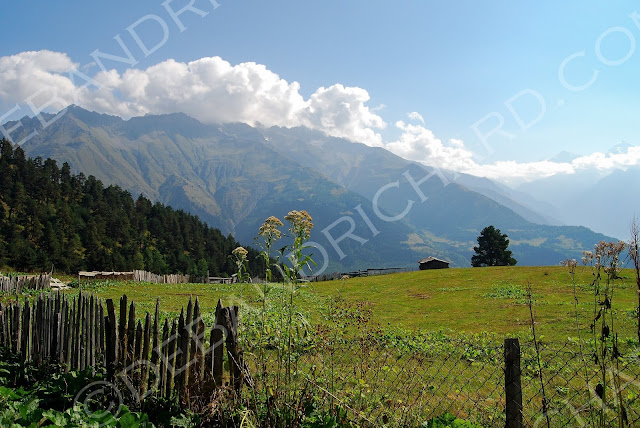 We stopped in view of Ushba (that double peaked mountain), but it was hiding in the clouds again. Our guide pointed out this small lake at the bottom of the hill was shaped like the country of Georgia. 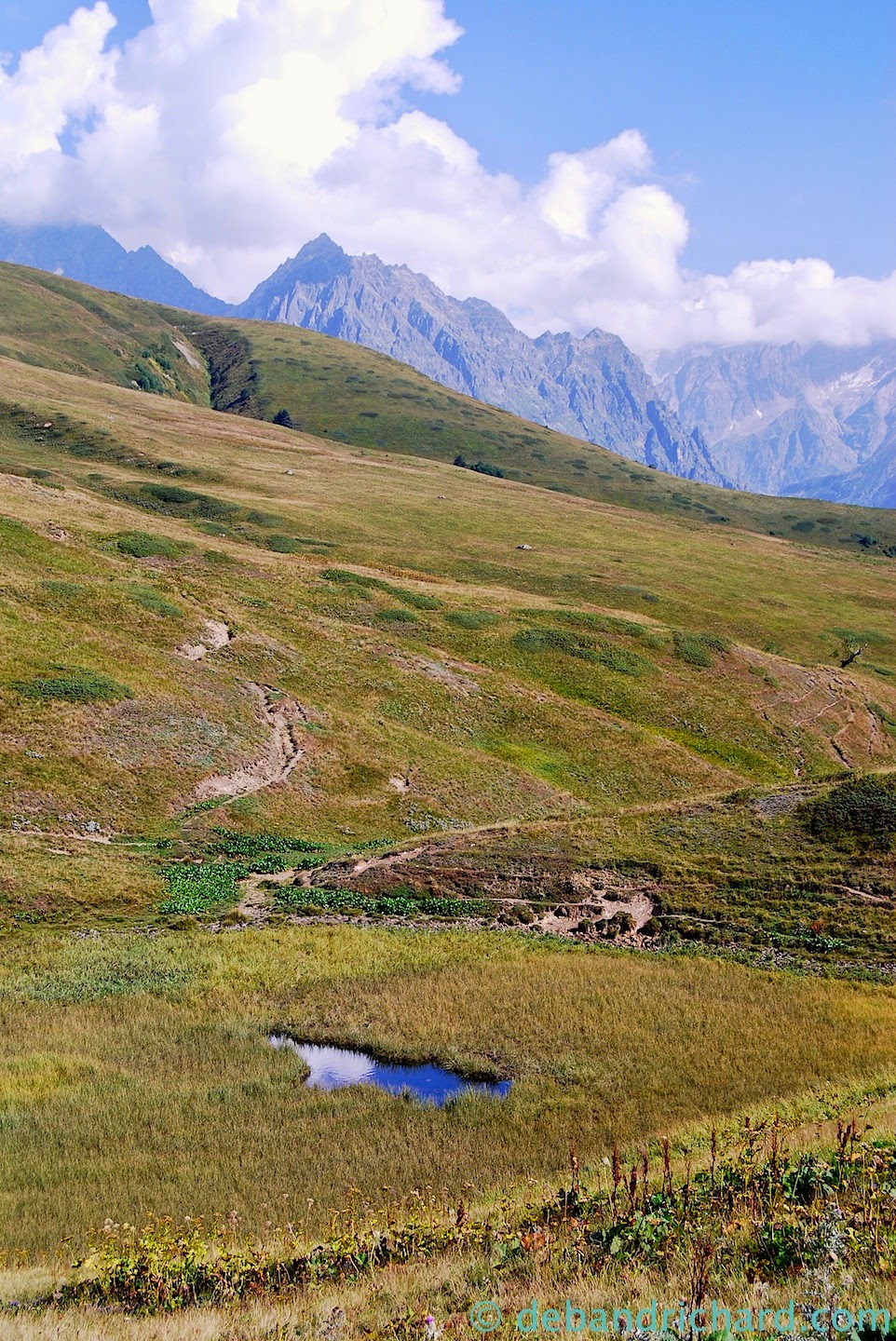 When we got to the end of the car trail, there appeared to be a herd of wild horses (maybe 15 or so horses). It is possible they belong to one of the farmers, cows and pigs roam free in the townlet so why can't horses roam free. 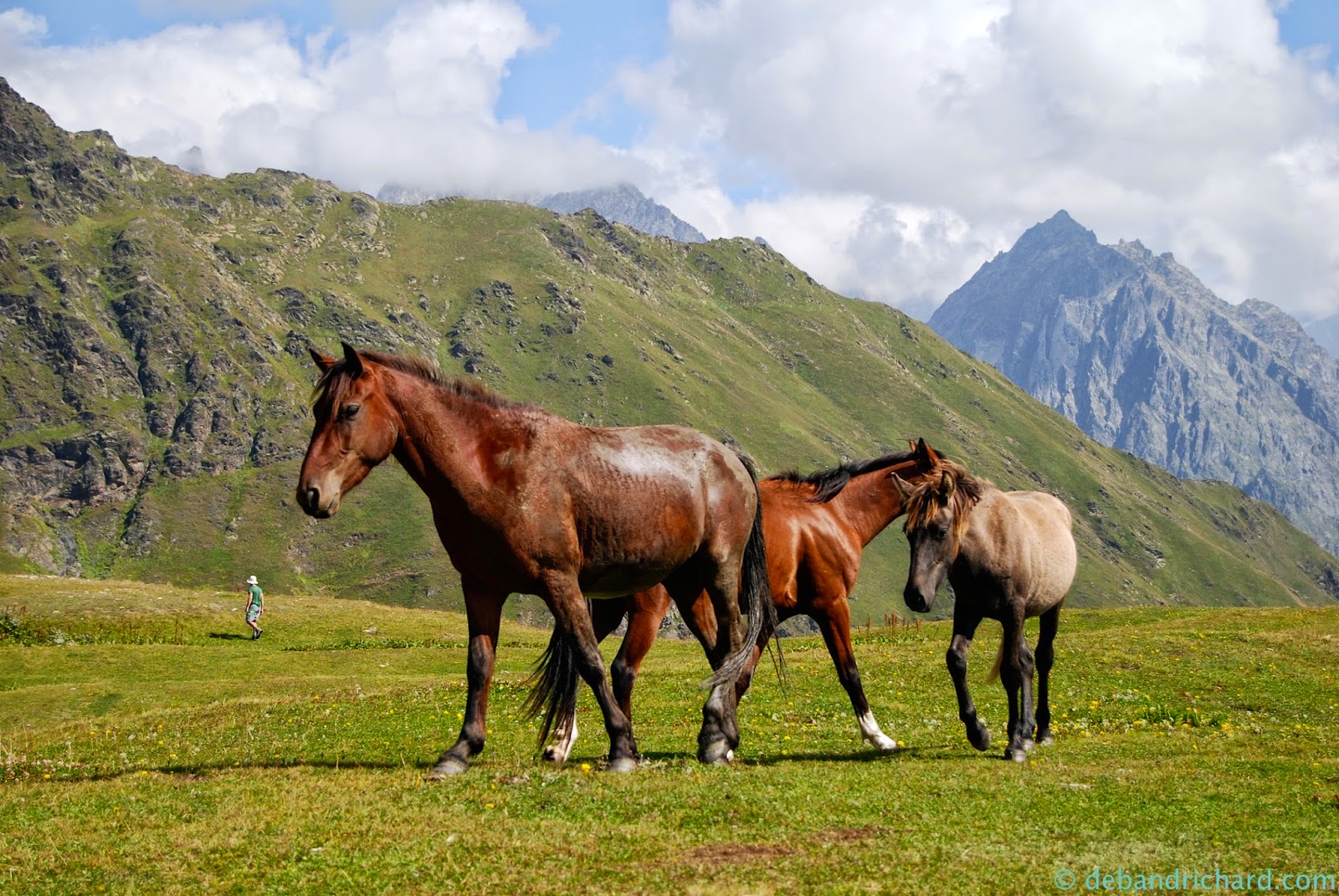 I am not exactly sure what I expected with the mountain lakes. There were about 7 small lakes in the area. 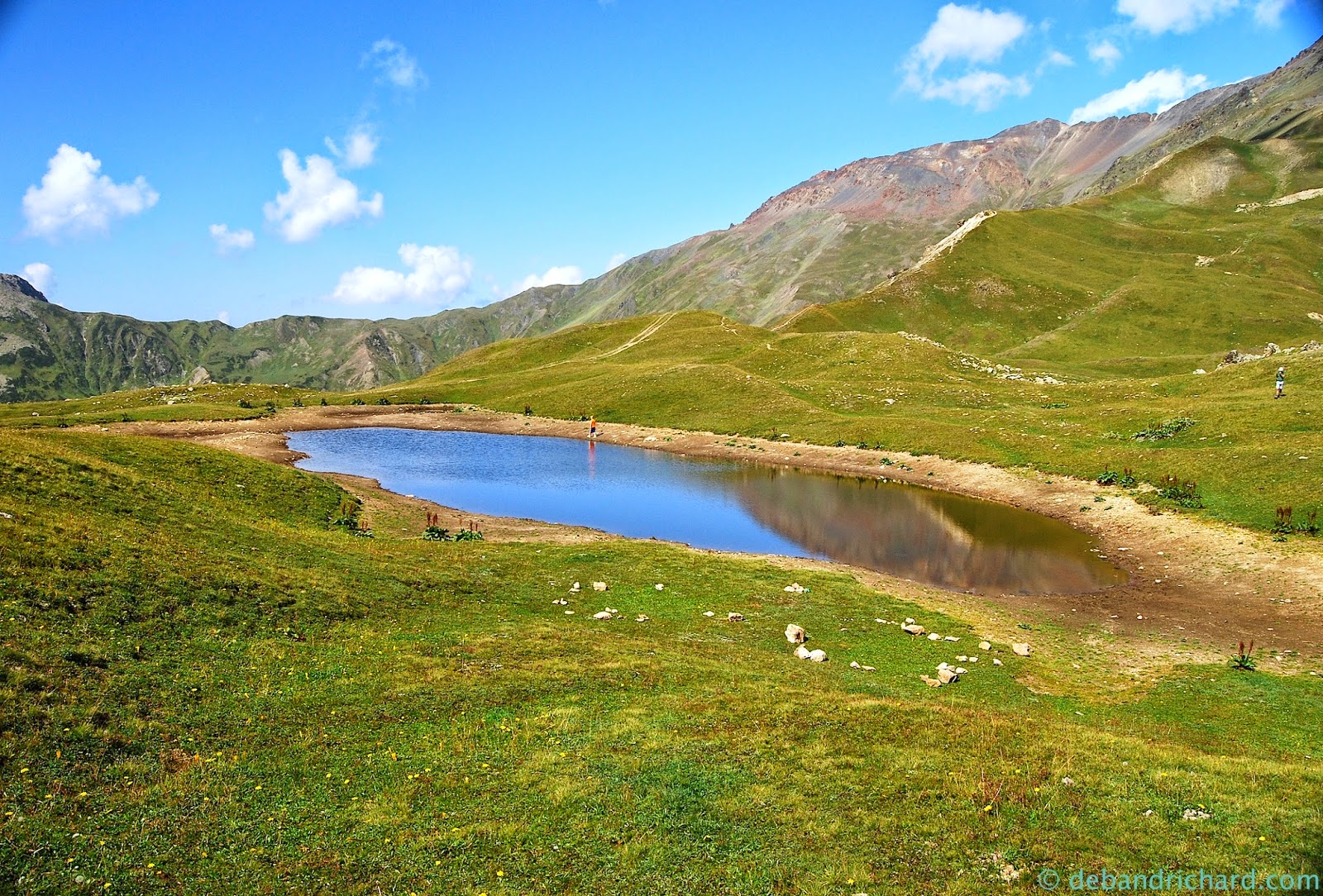 Mason circumnavigated all of them. He spotted frogs, tadpoles, fish, and a turtle. He got stuck in some mud getting too close to one lake. He found and skipped stones in all the lakes. I was unaware he could skip stones and the first time he showed me I thought it was luck. But here is photo evidence that he can skip stones. 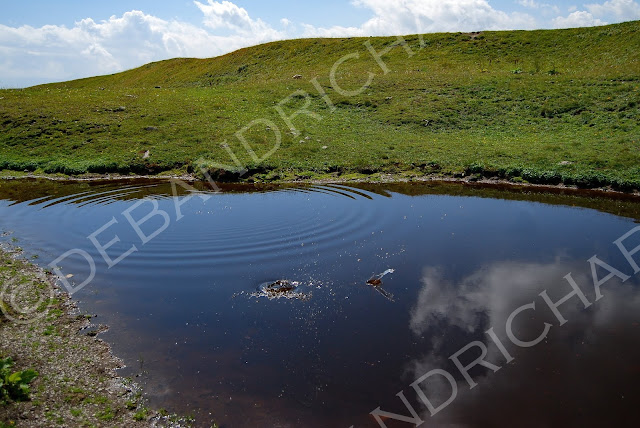 For the most part, we just admired the beautiful landscape....mountains in every direction we looked. I think we could see only one farm house and the car trail....otherwise, complete wilderness. 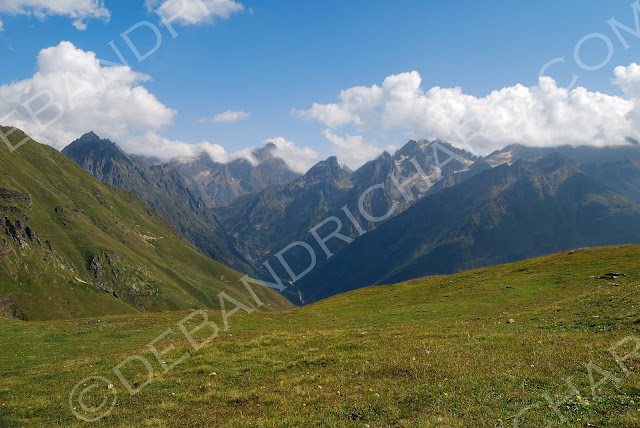 I'm not sure which ones in particular, but some of the peaks you see here are in Russia. 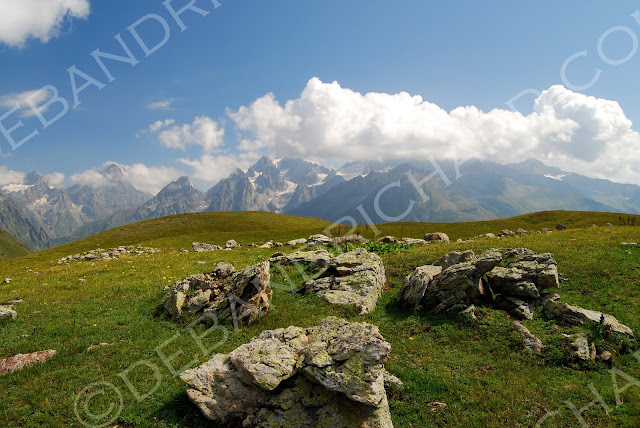 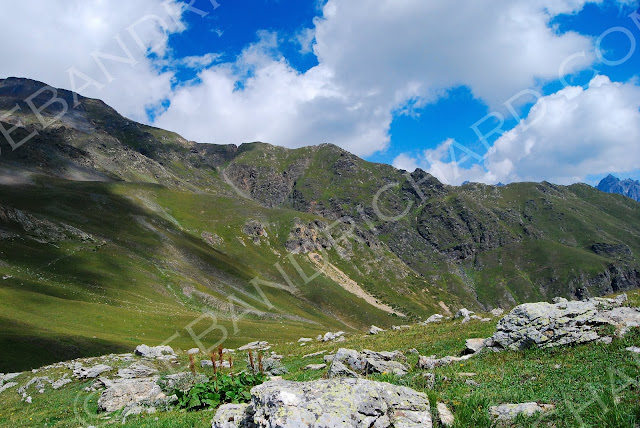 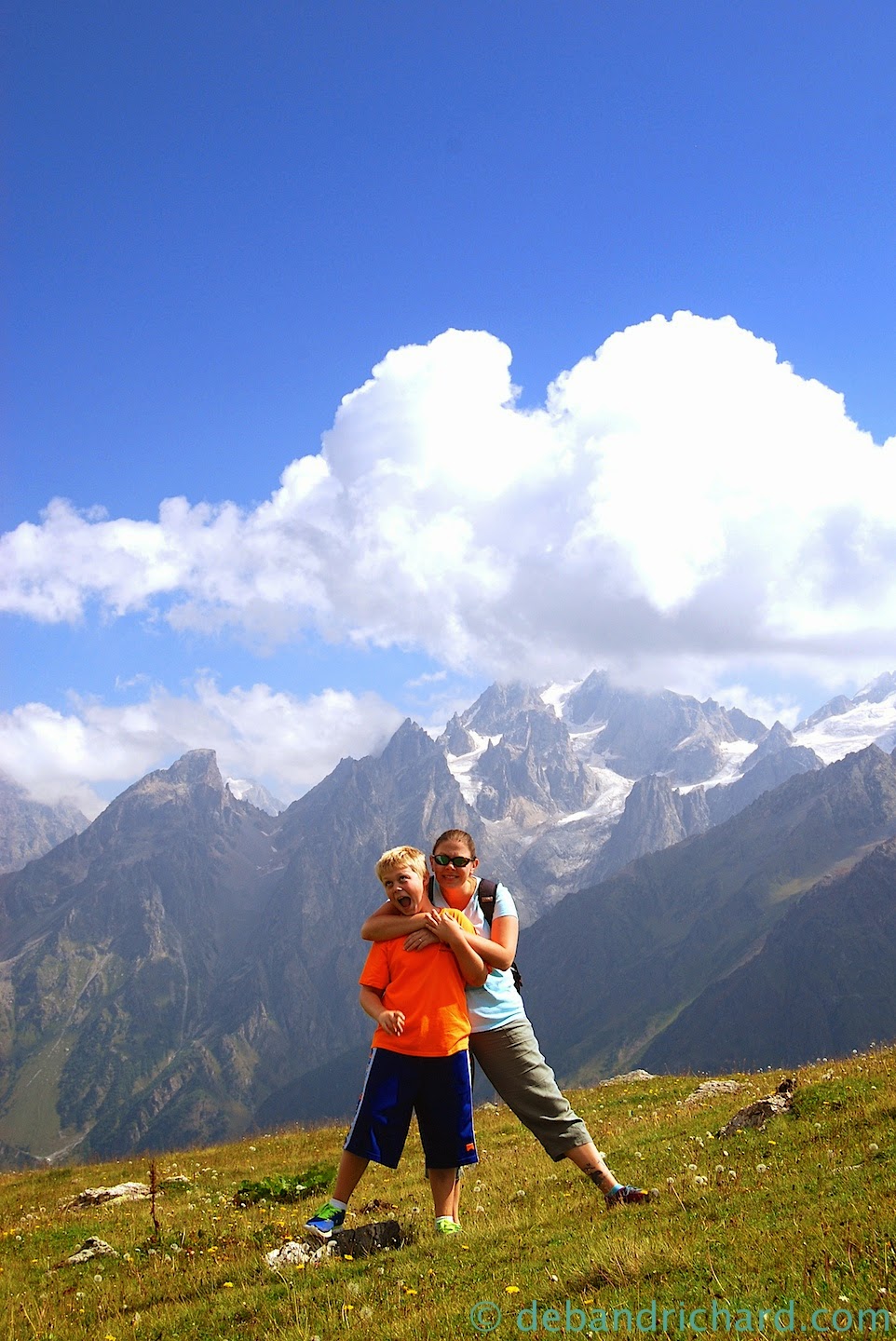 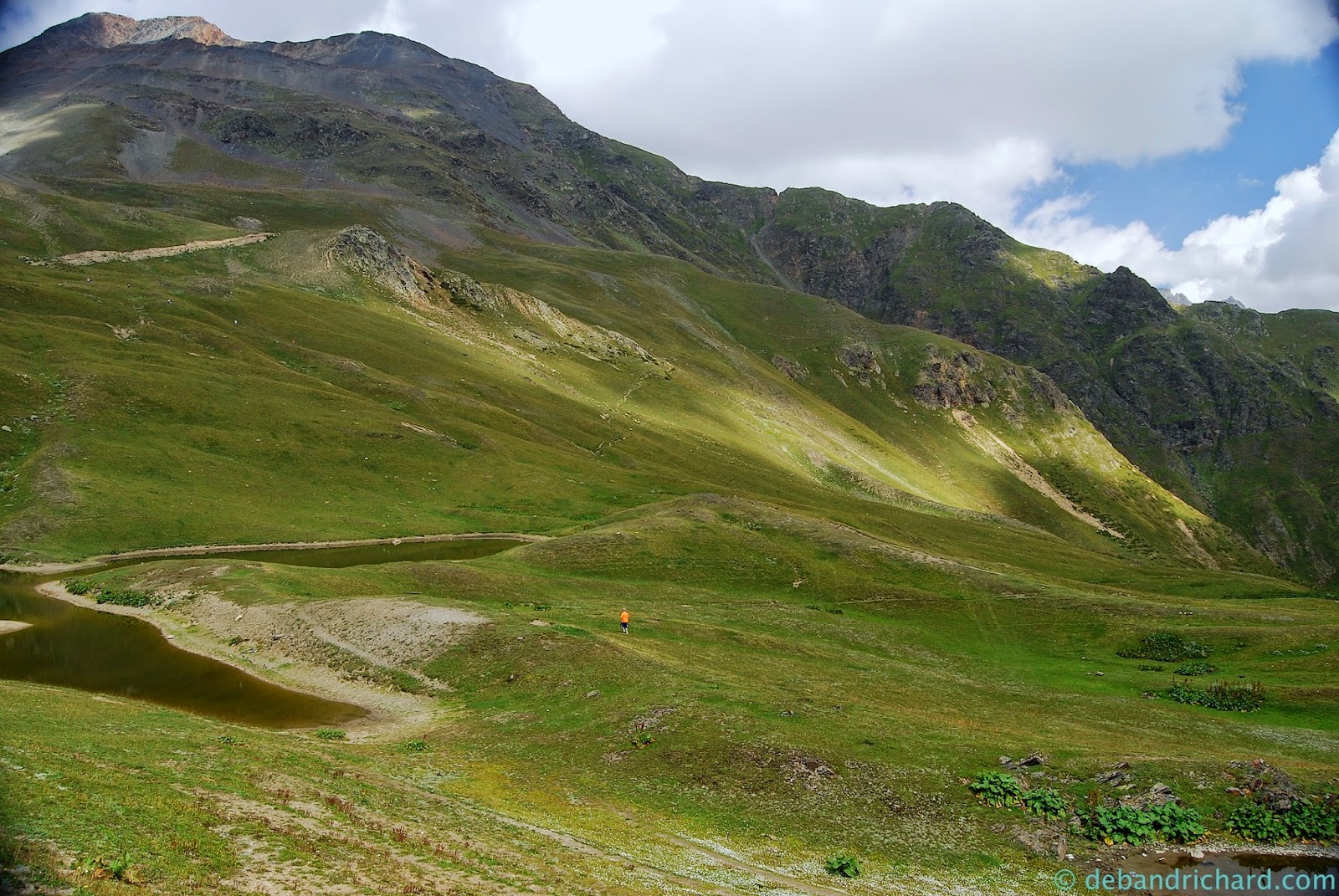 On the way back, we stopped at a cross and observatory deck overlooking the townlet of Mestia. 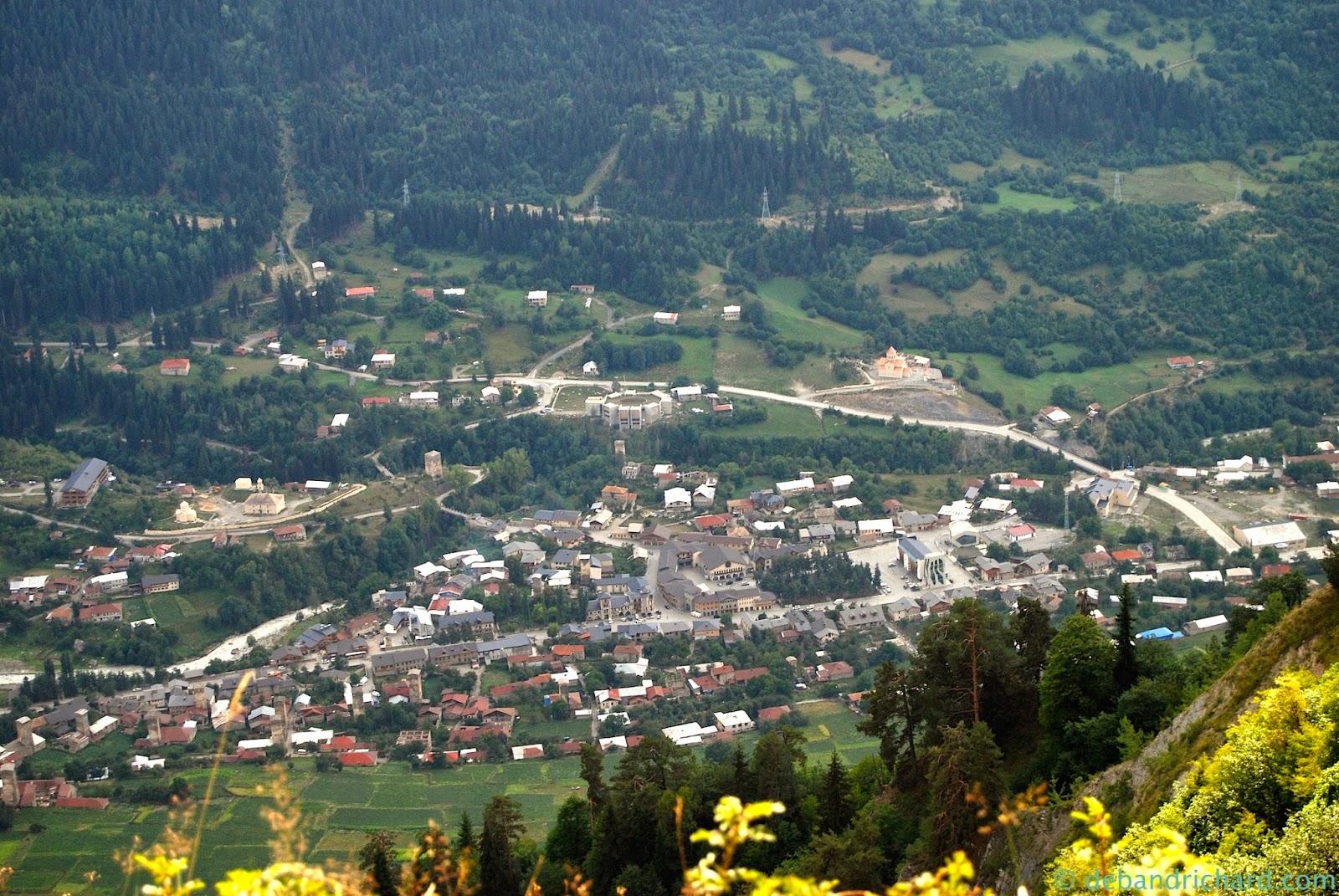 That afternoon, the group headed to some museums and another church. Mason and I opted out.

The following morning, we got up for the grueling ride back to Tbilisi. Our first rest stop was the restaurant we stopped at on Day One. Remember that pig that Mason was so excited to see. Well it appears that while we were in Mestia, she had some piglets!!!! There were two momma pigs and 17 piglets! As much as Mason wanted to bring one home, I told him no. He did get up close to see them (I just told him not to get between momma and her babies). I was even tempted to pick one up they were so cute! 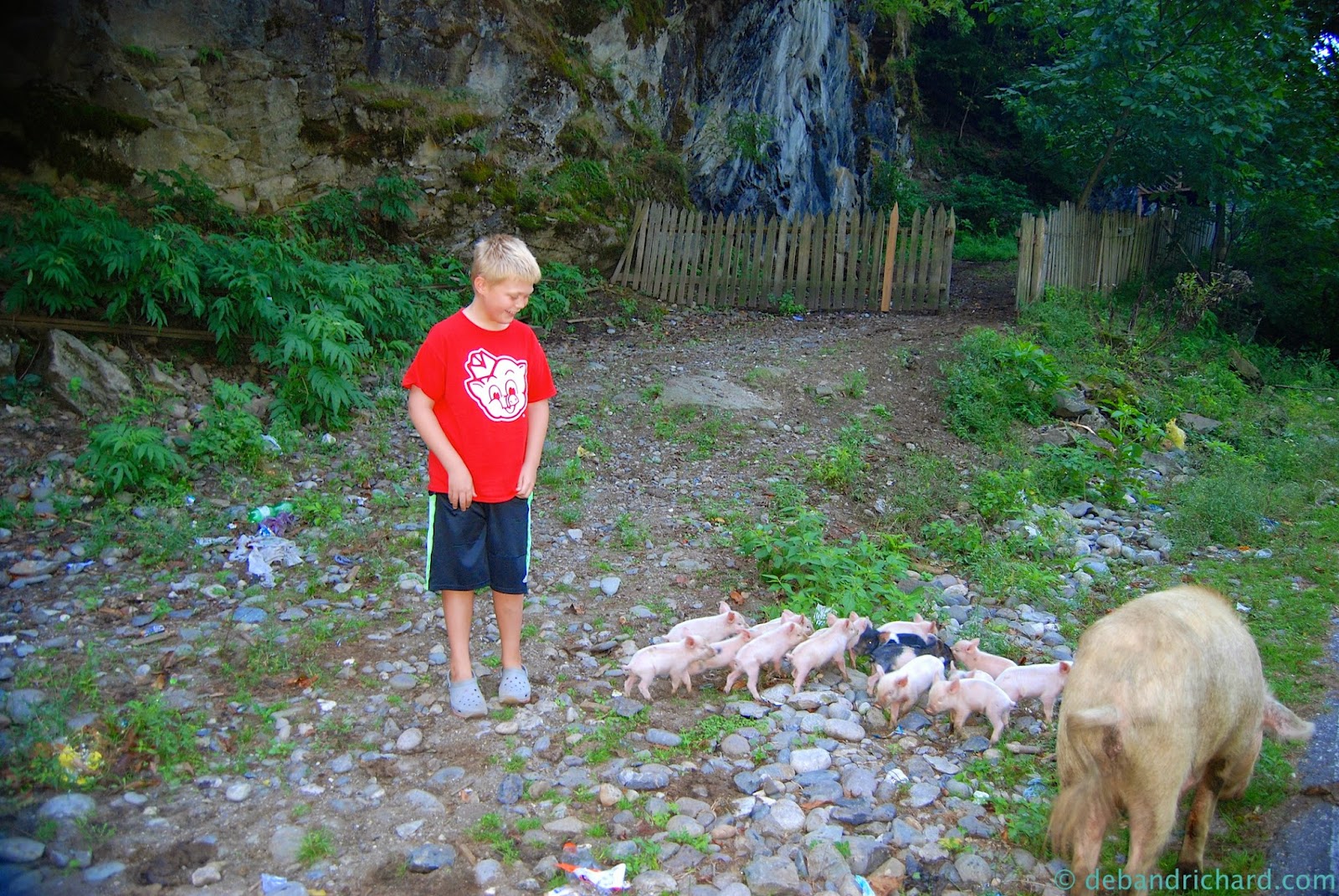 We stopped at Tsikhegoji, also known as the Fortress of Kuji. It is an ancient village/archeological site. I found it interesting to see a plastic covered dig in progress (we saw some of the recovered treasures in the dimly lit, no flash museum). Mason was less impressed (motion sickness to blame). I took a photo in front of the main entrance that is remaining. Mason is sitting on the 3rd wall built in the 9th century AD.  The tall 2nd wall was built 4-6th century AD. They way the walls were set up when invaders made it past the 3rd wall, the had to make a u-turn before attempting to penetrate the 2nd wall. People in the village, would be up on the top of the 2nd wall, shooting arrows down and eliminating the invaders! The 1st wall was inside of the 2nd wall and was built around the 3rd century BC (hopefully, I remember all my wall ages correctly...my apologies if am off). 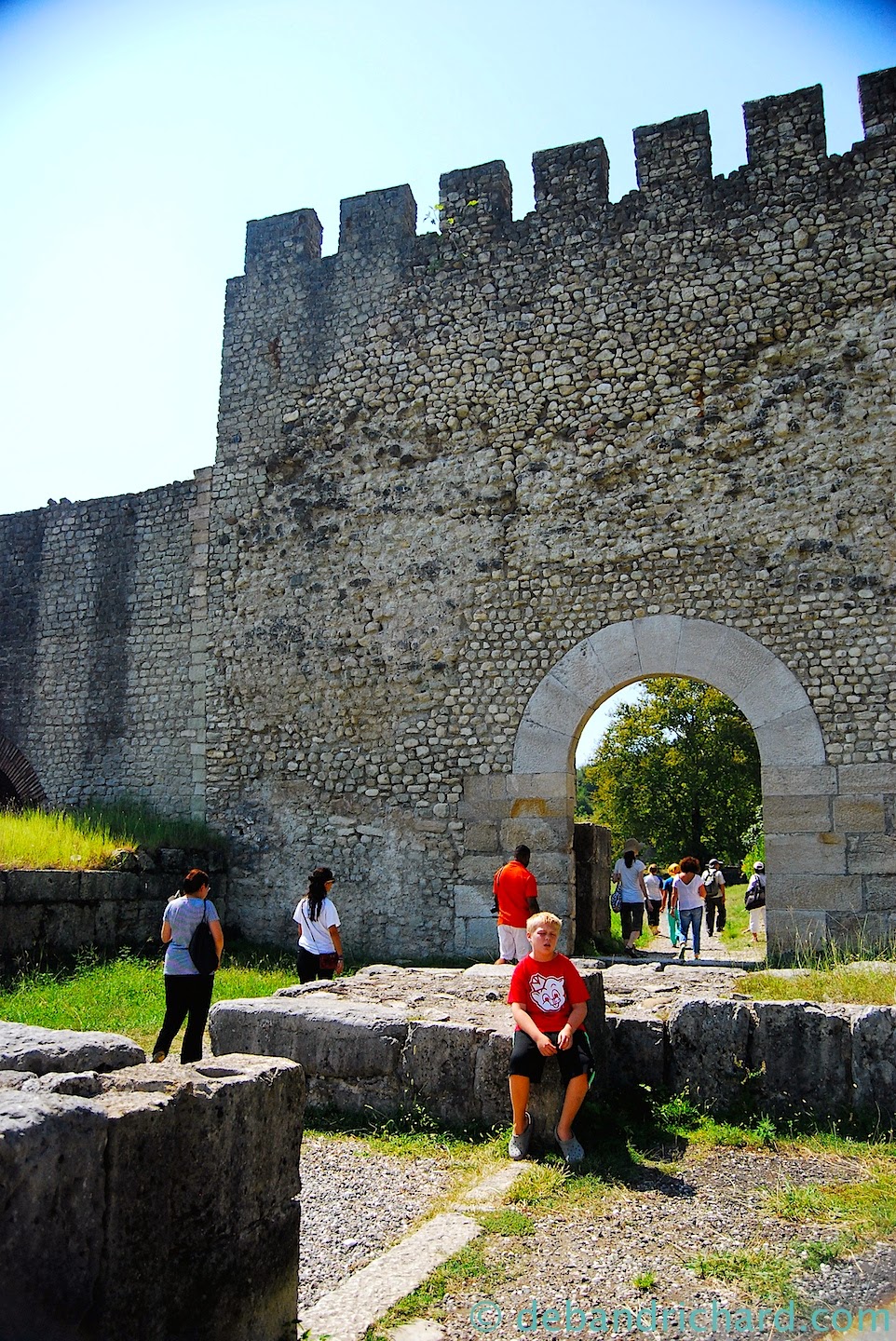 Following the fortress, we had lunch and then headed to the Martvili Canyon for a boat ride. Can you tell who is charge? 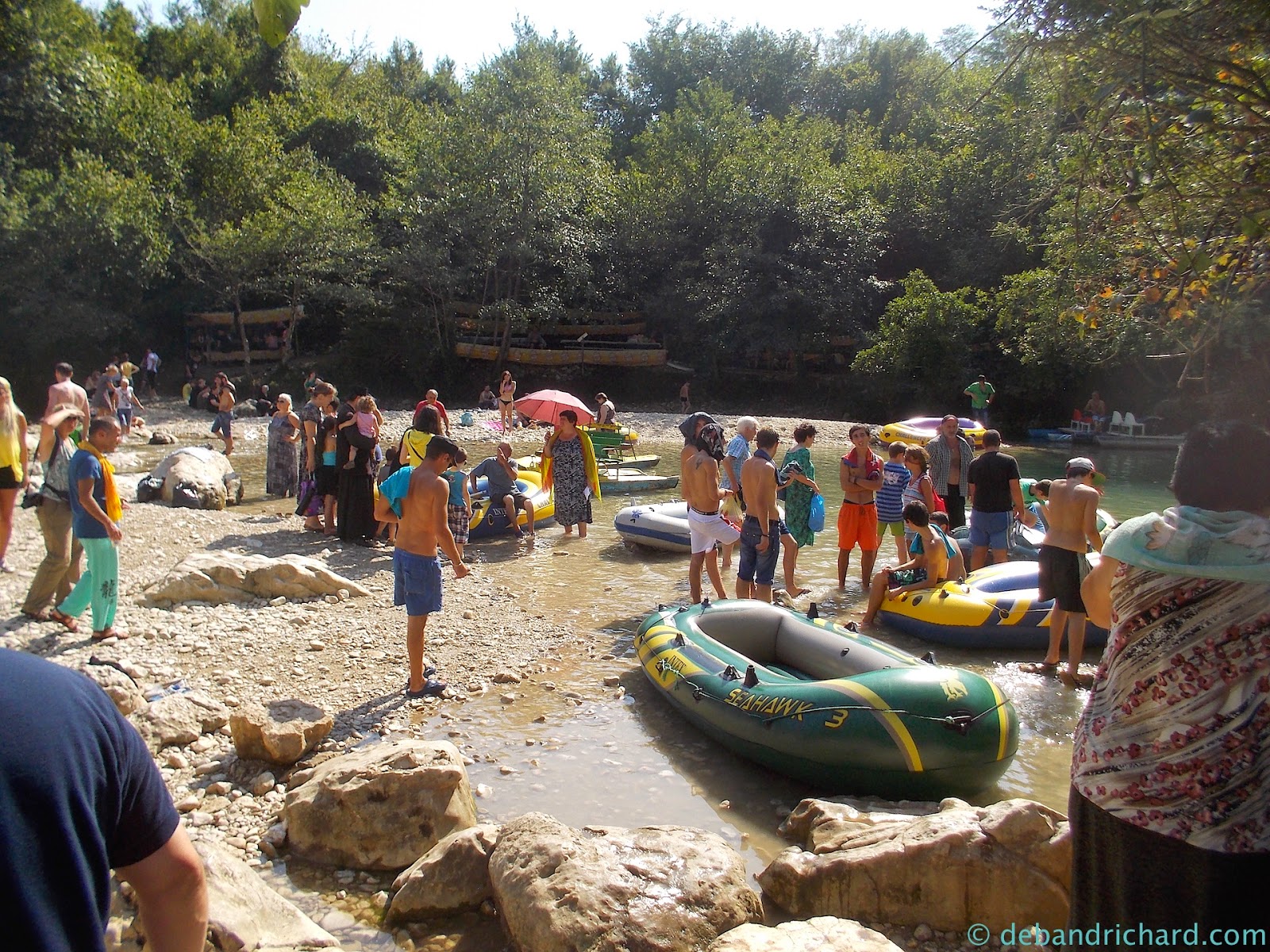 The woman with the umbrella was in charge. Our guide talked to her, she told us what boats to get into and away we went. We were paddled through the canyon. There is a super shallow portion where you need to get out and carry the boat over before continuing. 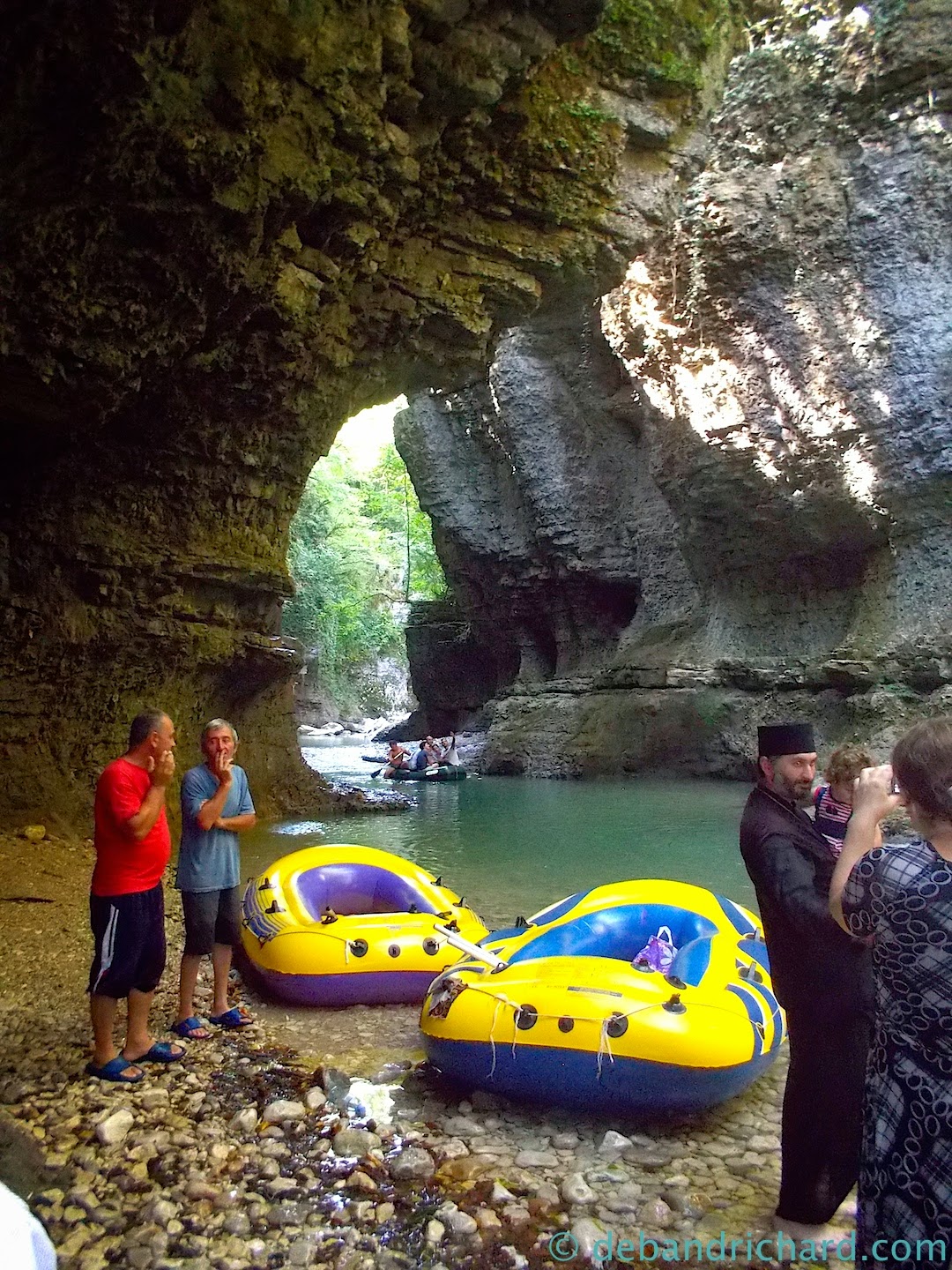 We took the shorter ride where it was just a turn around point to get out and climb canyon walls and skip stones. Mason found a rock with a plant fossil in it. 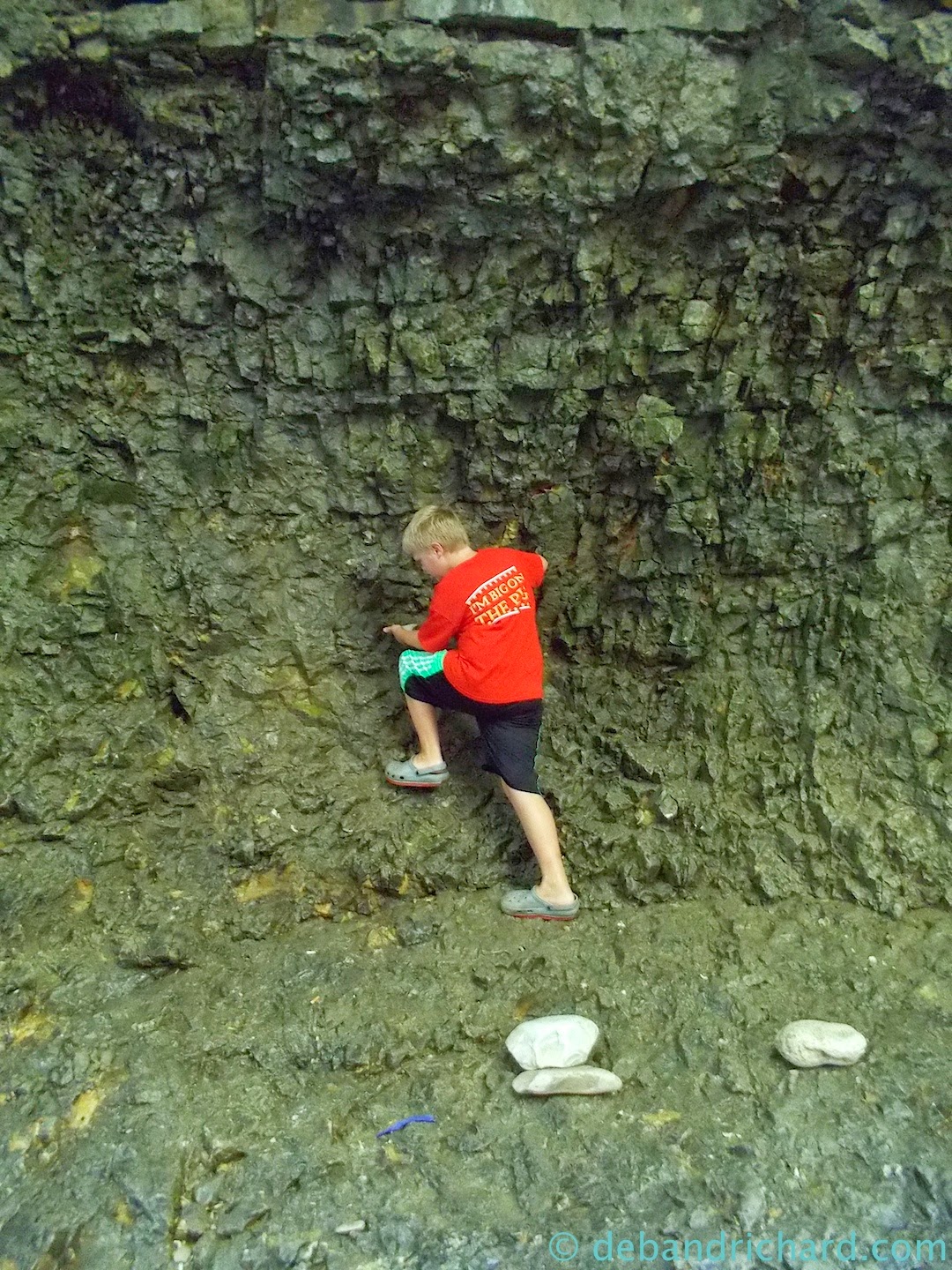 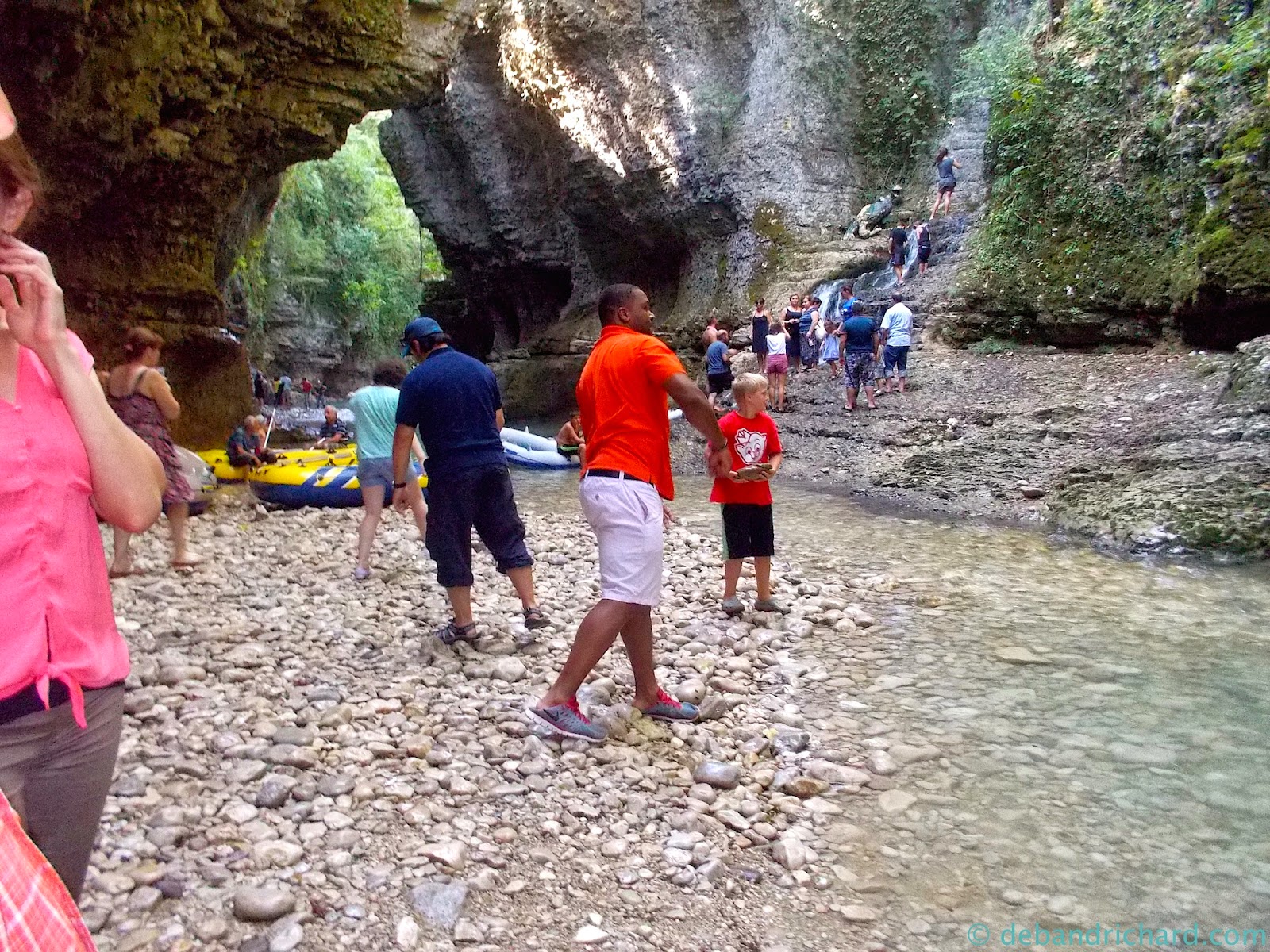 Afterwards, we got back in our inflatable and headed back. Mason helped paddle this portion of the ride. He took his job serious! 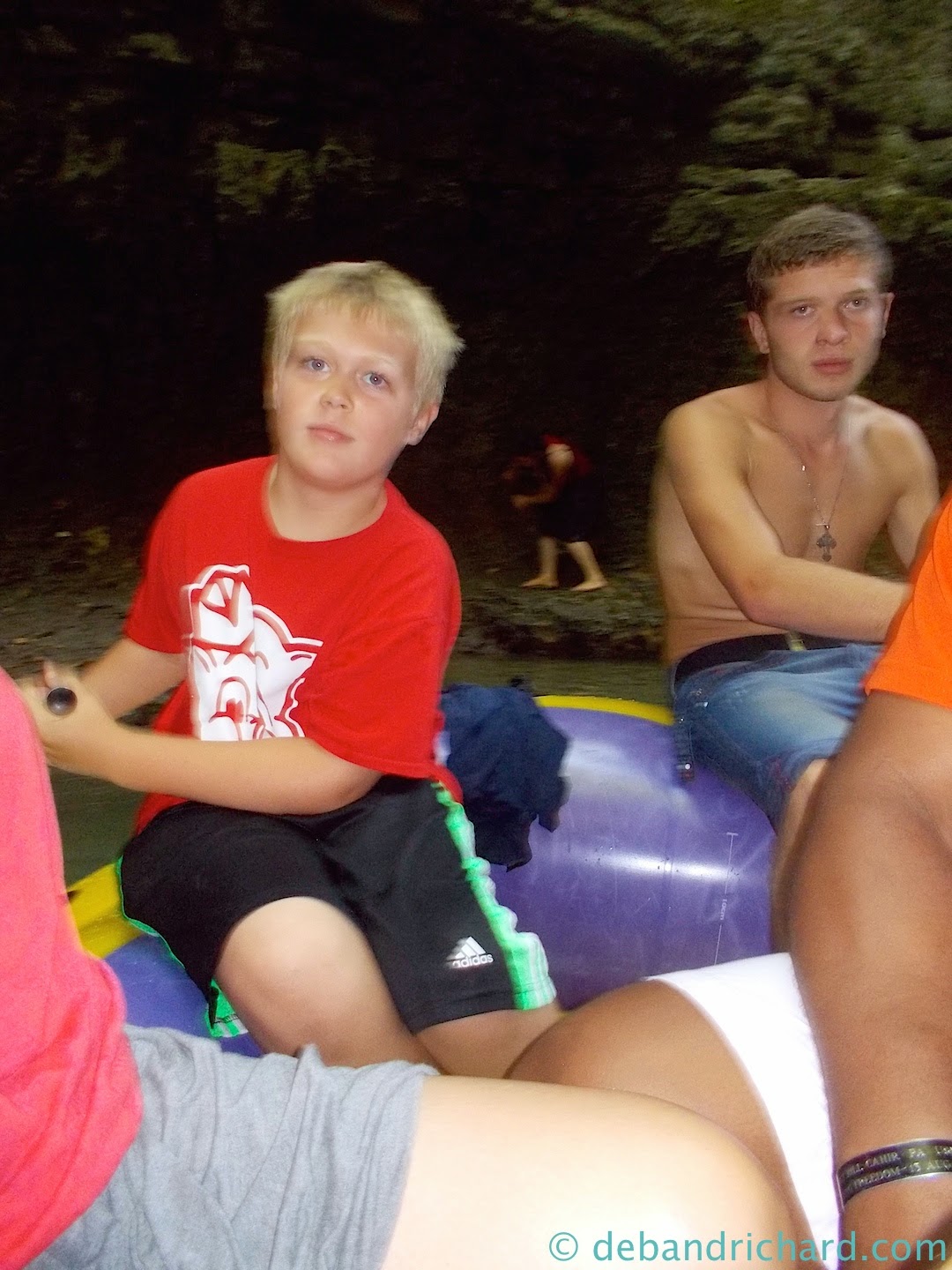 After the boat ride, we headed back to Tbilisi, only making small snack and souvenir stops at road side stands. We made it back a little before 2200....so Mason may have been a tad tired the next day at school, but he was so excited to see his friends the next morning he got out of bed no problem.

All in all, I would say the trip was pretty divine (and Mason now has an amazing rock collection including slate, granite, iron ore, plant fossil, crystal, and many other unidentified stones). 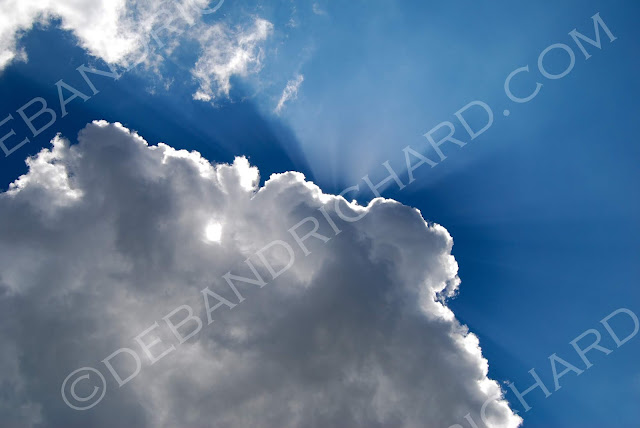