So we woke up to a beautiful morning the next day. 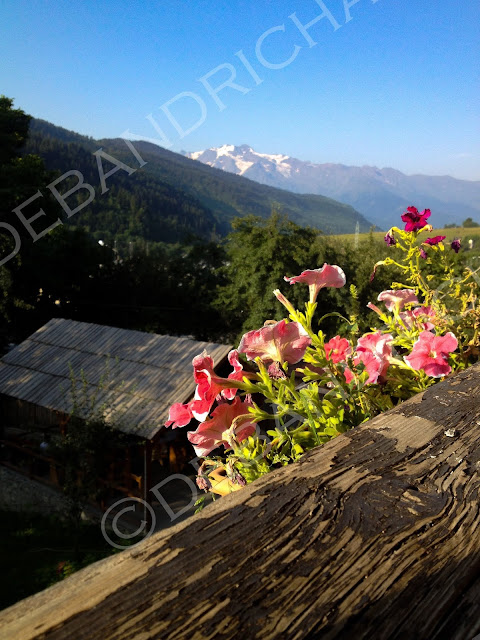 After our breakfast, we headed out on a short 35 km drive (given we were driving on the edge of mountains it took about 3 hours each way) to the village of Ushguli.

We stopped to get another view of Ushba (you can see the two peaks of the mountain much better from this angle) on the way. 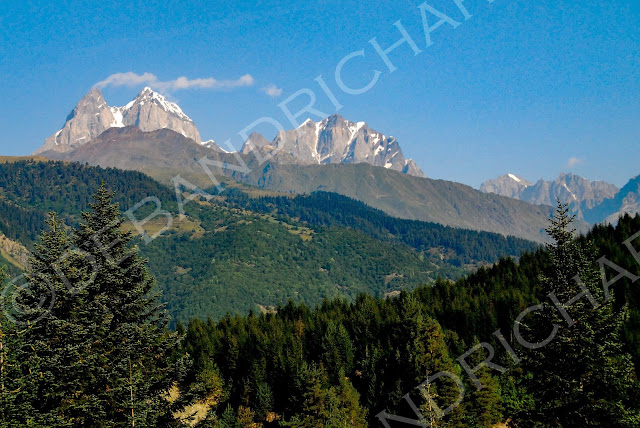 Throughout the Svaneti area there are towers. A lot of these towers were built starting in the 9th century. The purpose of the towers is mainly for protection from avalanches, but they work against invaders as well. The first floor is typically about 12 feet in the air and accessible only by ladder. 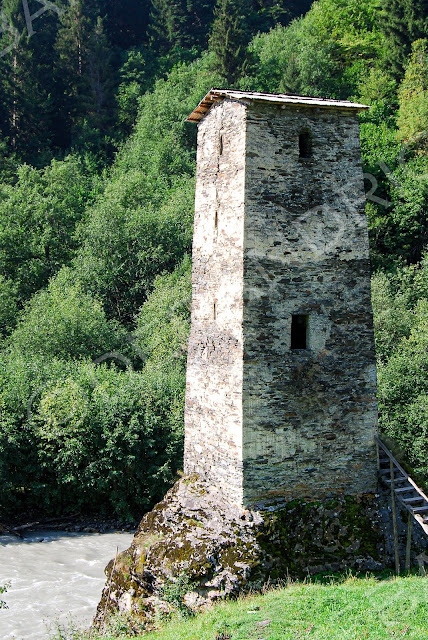 We stopped at the Love Tower. Our guide told us two legends associated with this tower. One is a woman's love went off to fight in a war, she stayed in the tower waiting for him, but he never returned. The other is a woman's parents did not like her love and she was locked into the tower to keep him away from her. 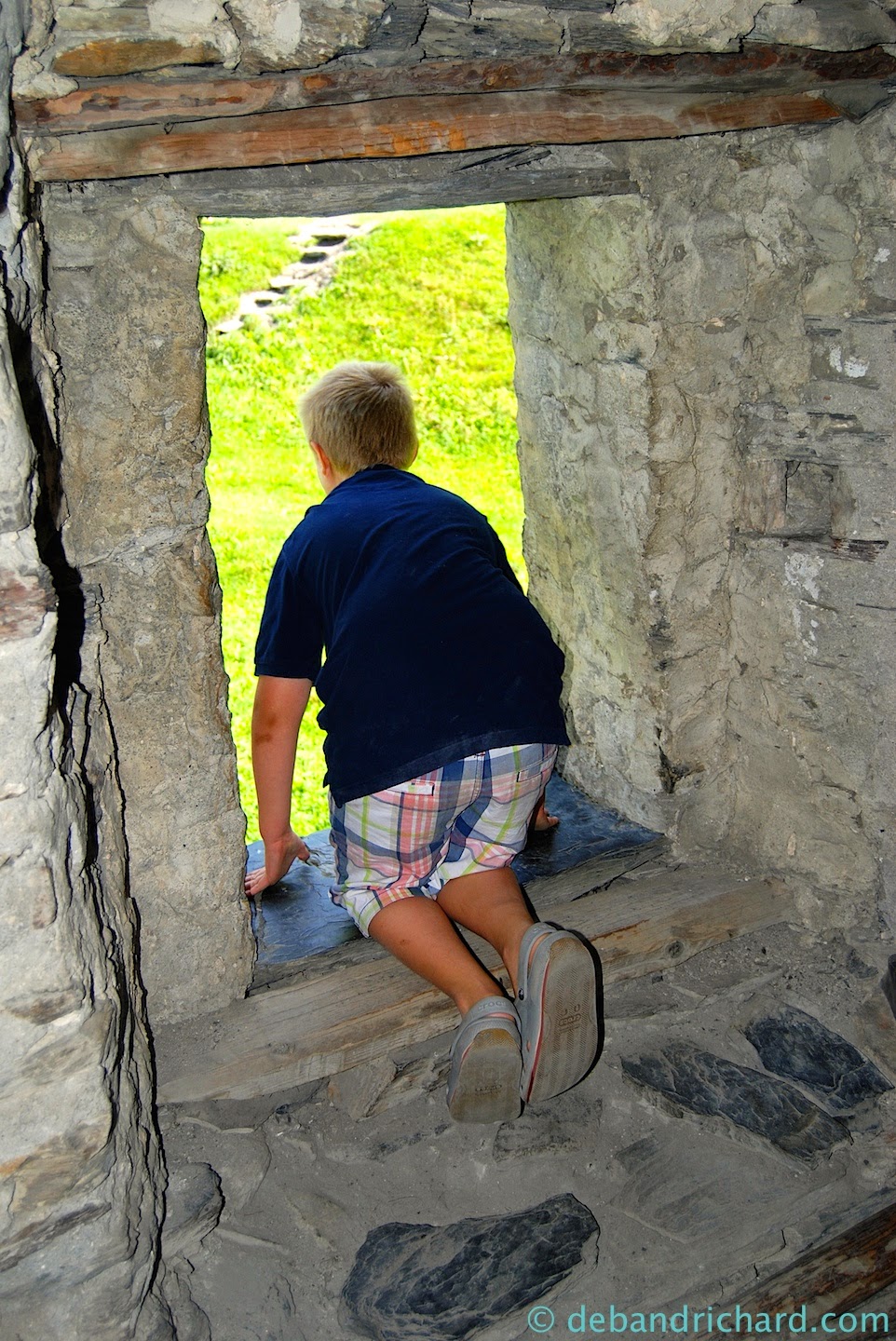 We had the opportunity to climb the tower. We went up the outside stairs, there was some stones stacked up along the wall we could climb to get up to the next floor, followed by 2 ladders up to the 3rd and 4th floors. The floors were made of what looked like birch logs. It doesn't seem like it would be warm and cozy during an avalanche, but that's just me..... 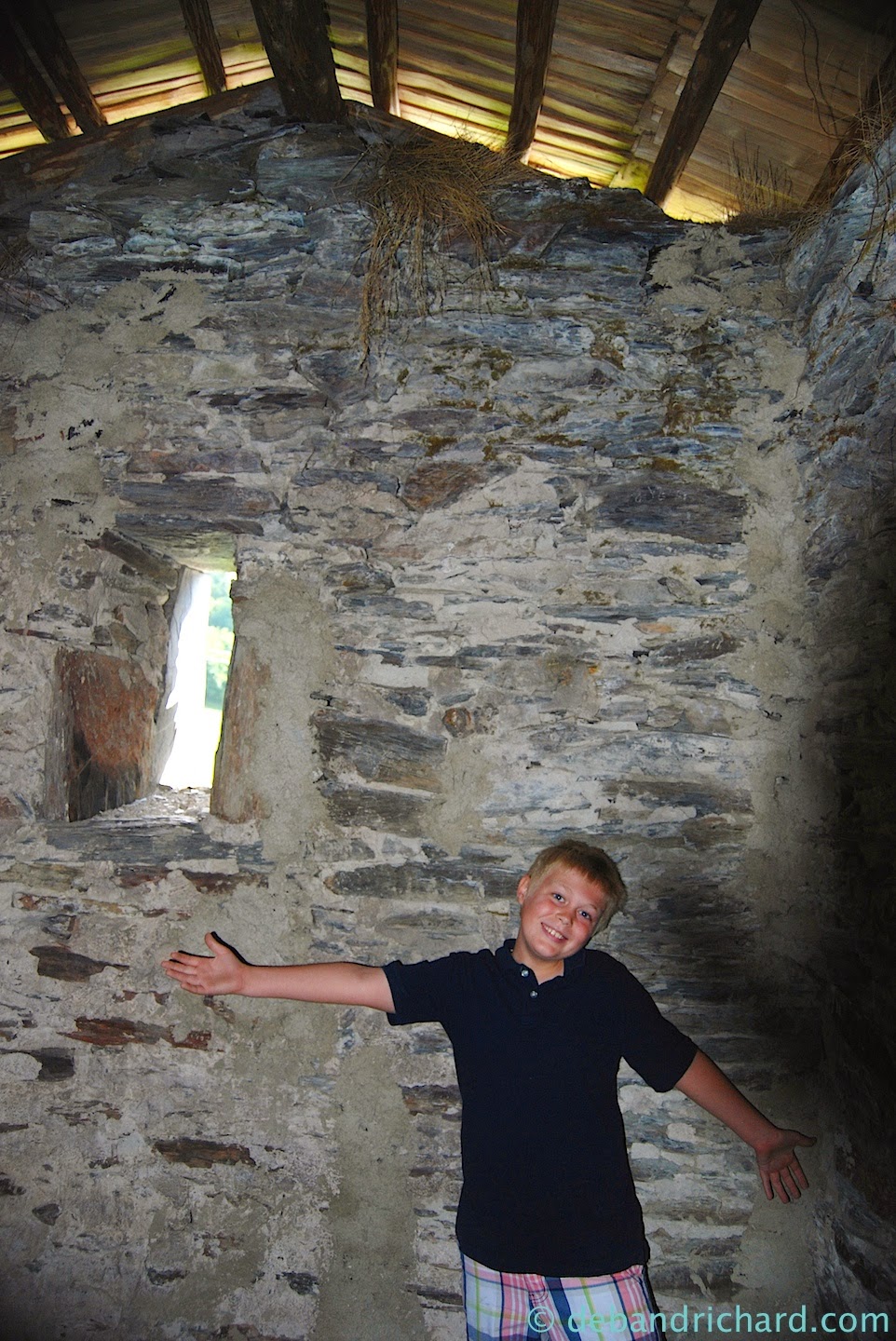 After climbing back out of the tower, we stuck our toes in the freezing cold river water rushing by. Mason then picked a crab apple from a tree.....this was before he bit into the tart little treat. 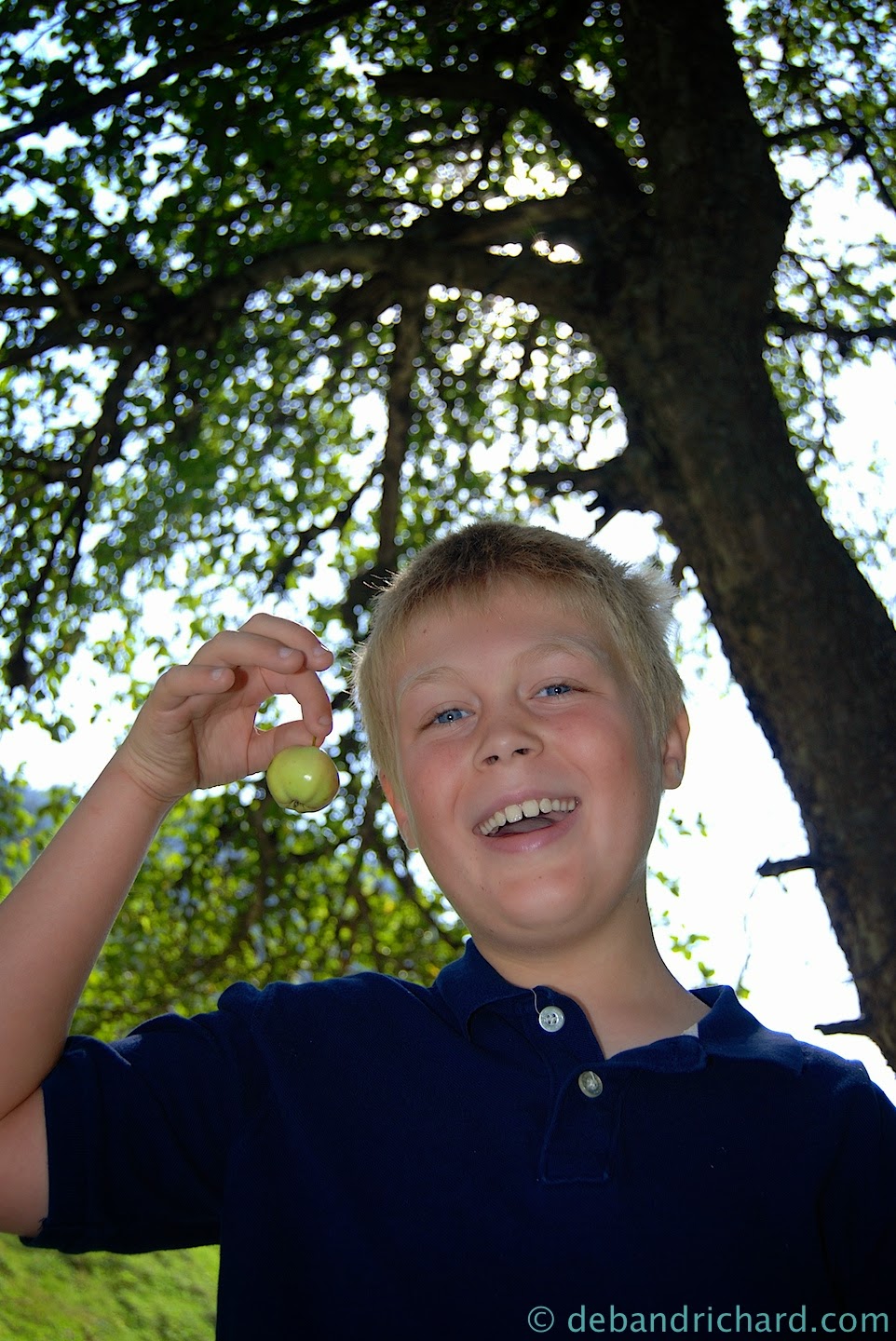 The Svan woman who was charging the admission to the Love Tower also had a collection of crystal rocks for sale. Mason tried using Russian to negotiate a price. Svans are a subgroup of Georgians that speak Georgian and a Svan language, so it is possible she didn't know Russian. 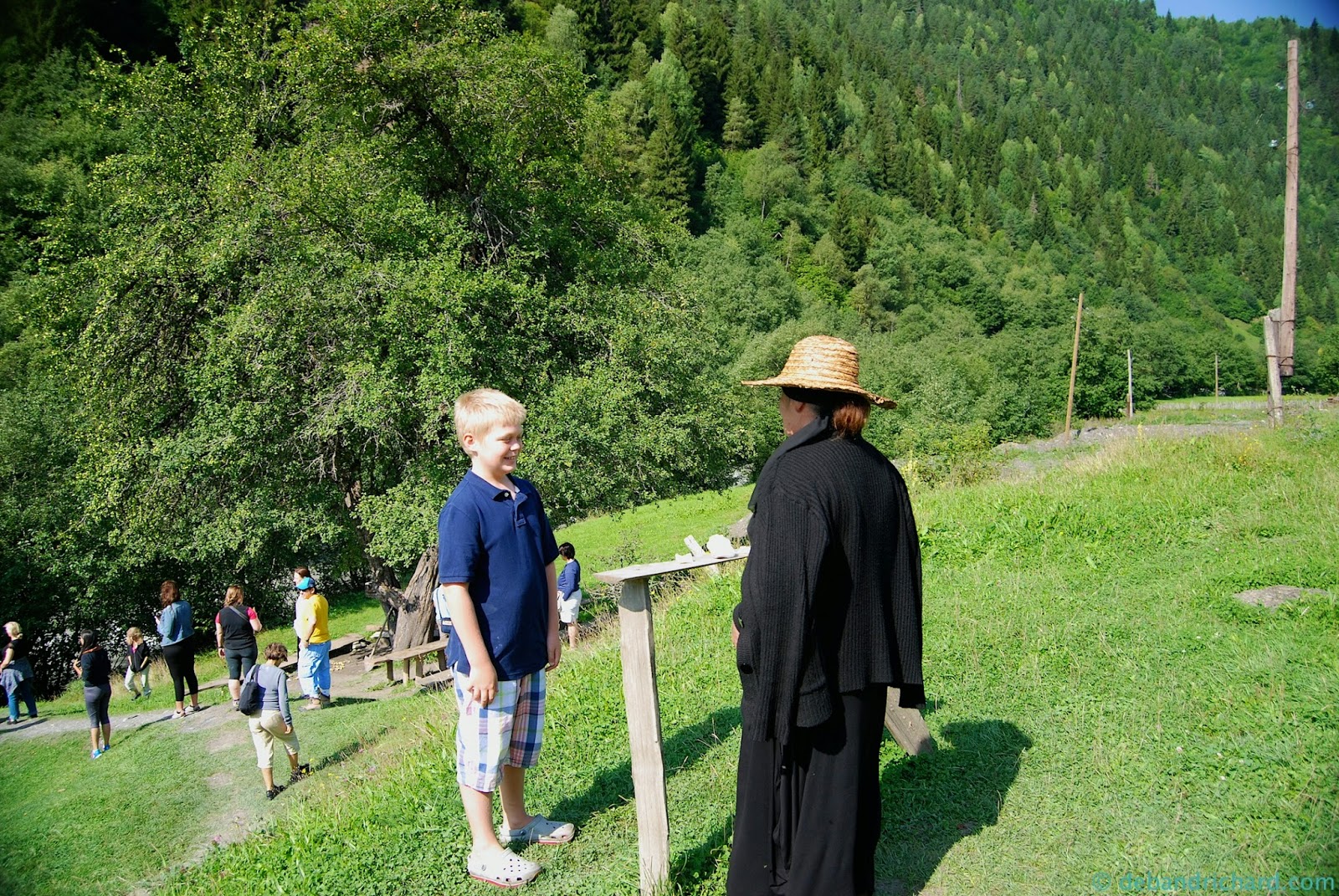 Both appear happy with the deal negotiated (yeah for fingers!). 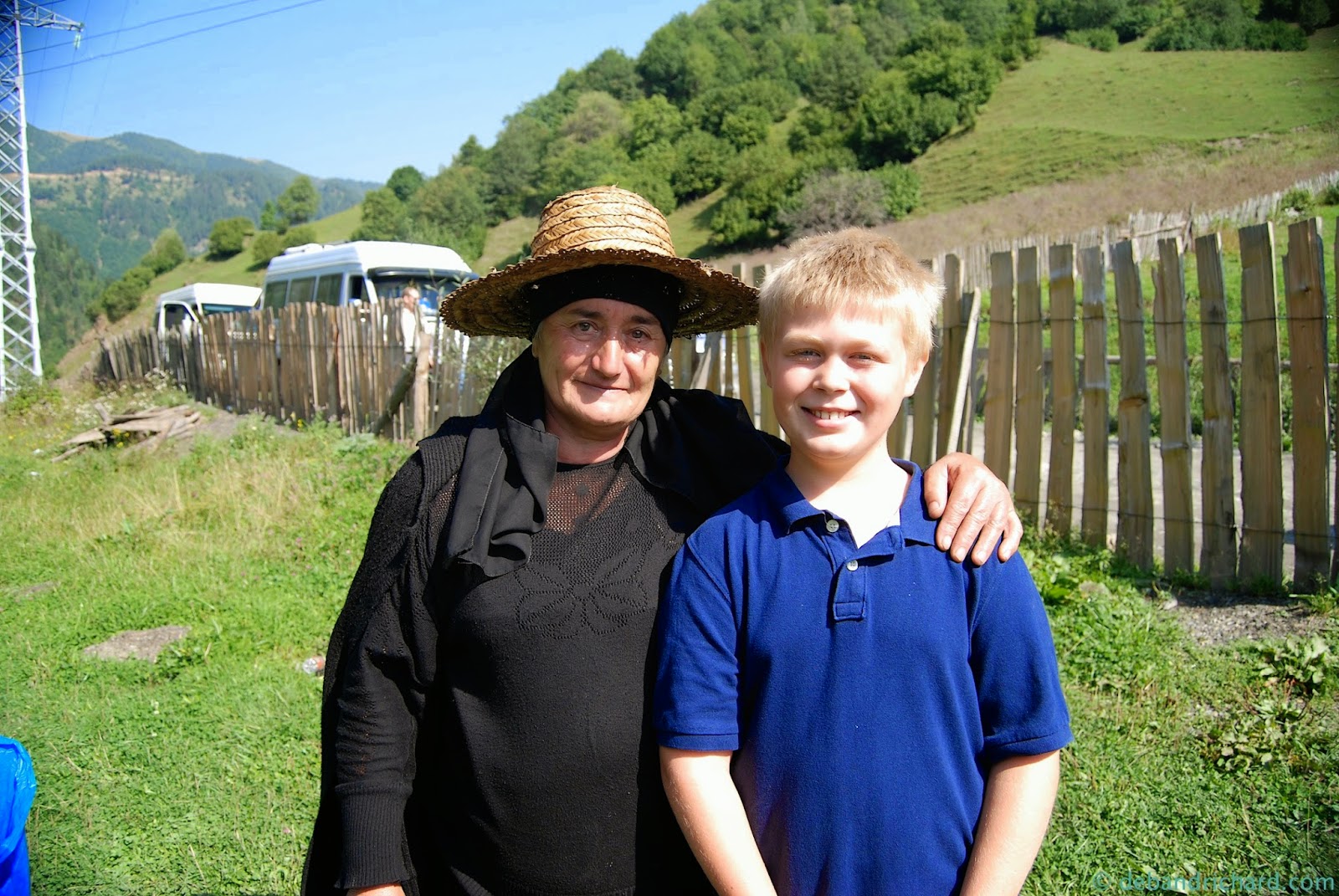 Mason's crystal! He paid 8 GEL (a little more than $4) for the large crystal and she gave him the small one as a bonus. 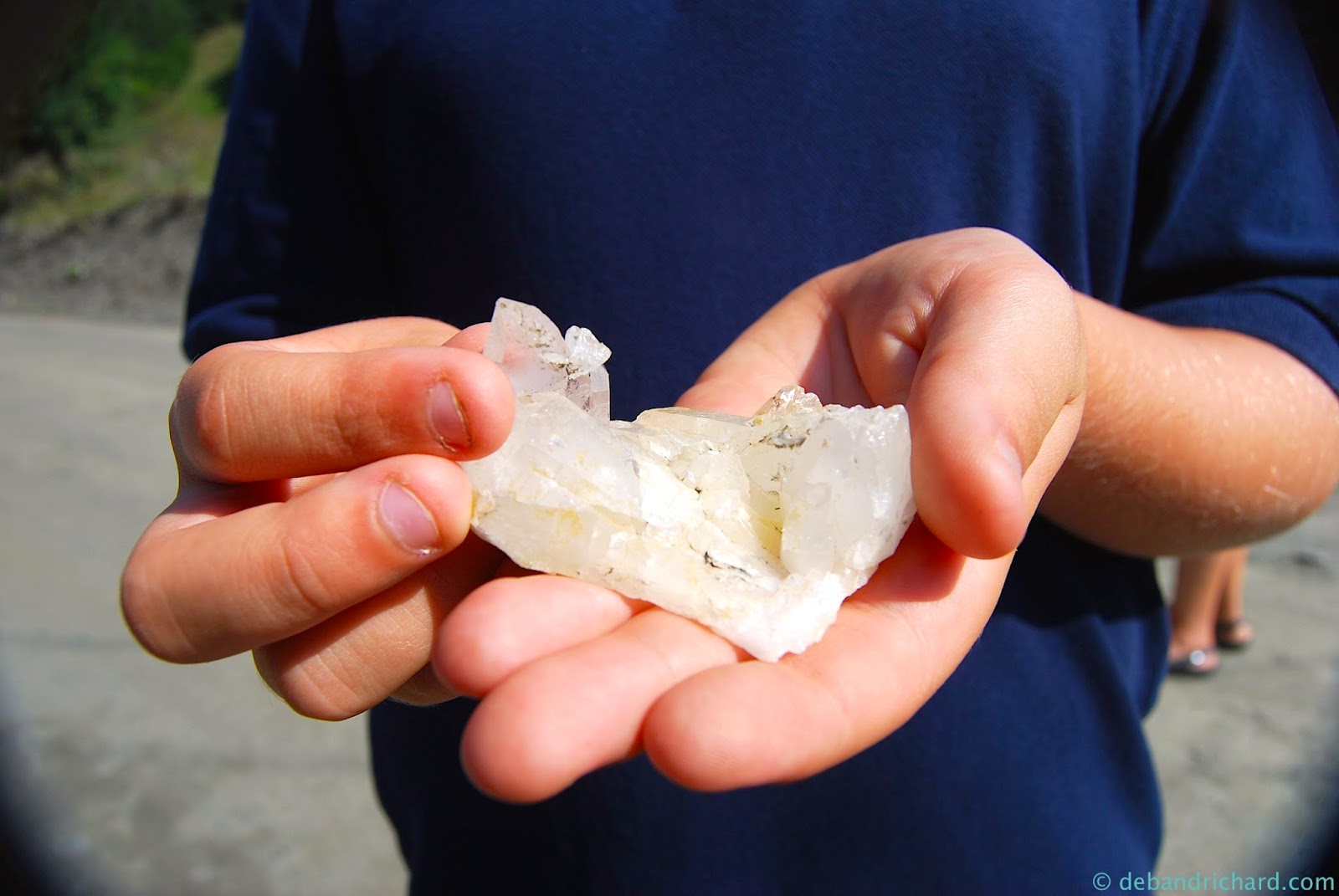 Ushguli is considered to be the highest settlement in Europe (wikipedia has it at 2400m (close to 8000 ft)). The area is a UNESCO heritage site. Our guide said 200-300 people live here year round. During the winter though, the road to Mestia is impassable and no visitors can make it in. 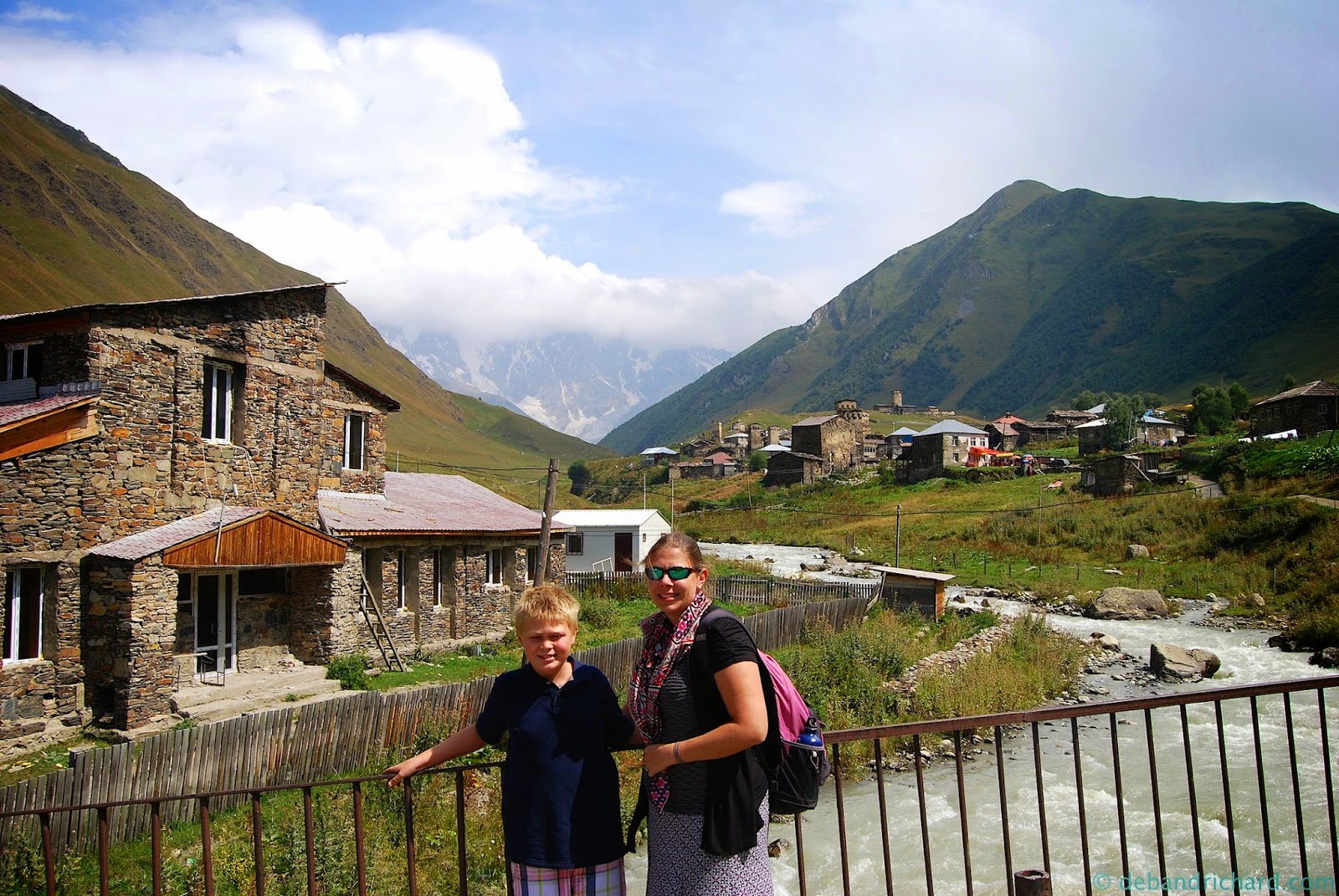 Obviously the architecture of the buildings is so different than anything we normally see, so we took a ton of pictures, the green mountains behind the village was so beautiful as well. 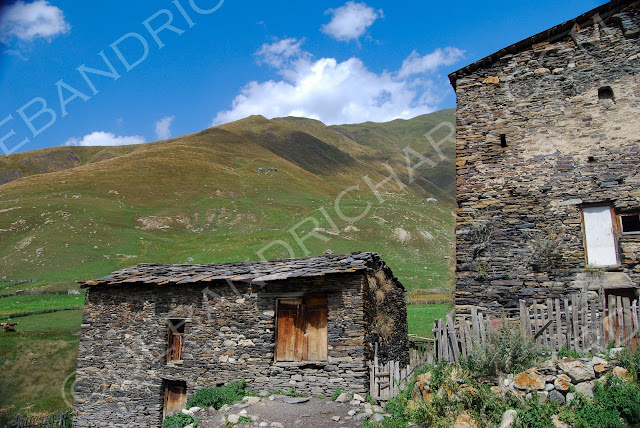 It seemed nearly every home had a tower associated with it. 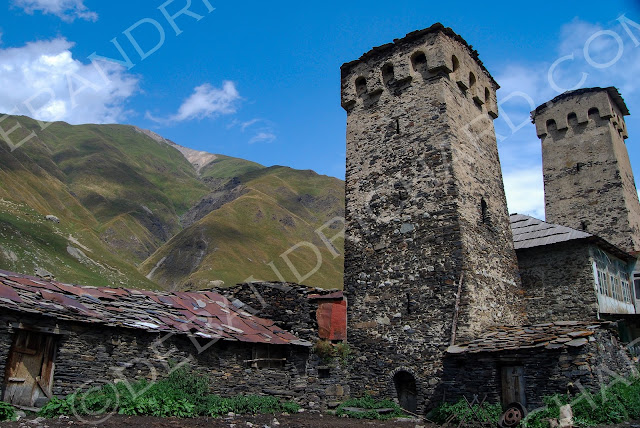 There were streams meandering throughout the streets, as well as, many a cow patty to navigate around. The mix of old and new was so apparent. Houses with power lines and satellite dishes built of rock connected to these 1000+ year old towers. 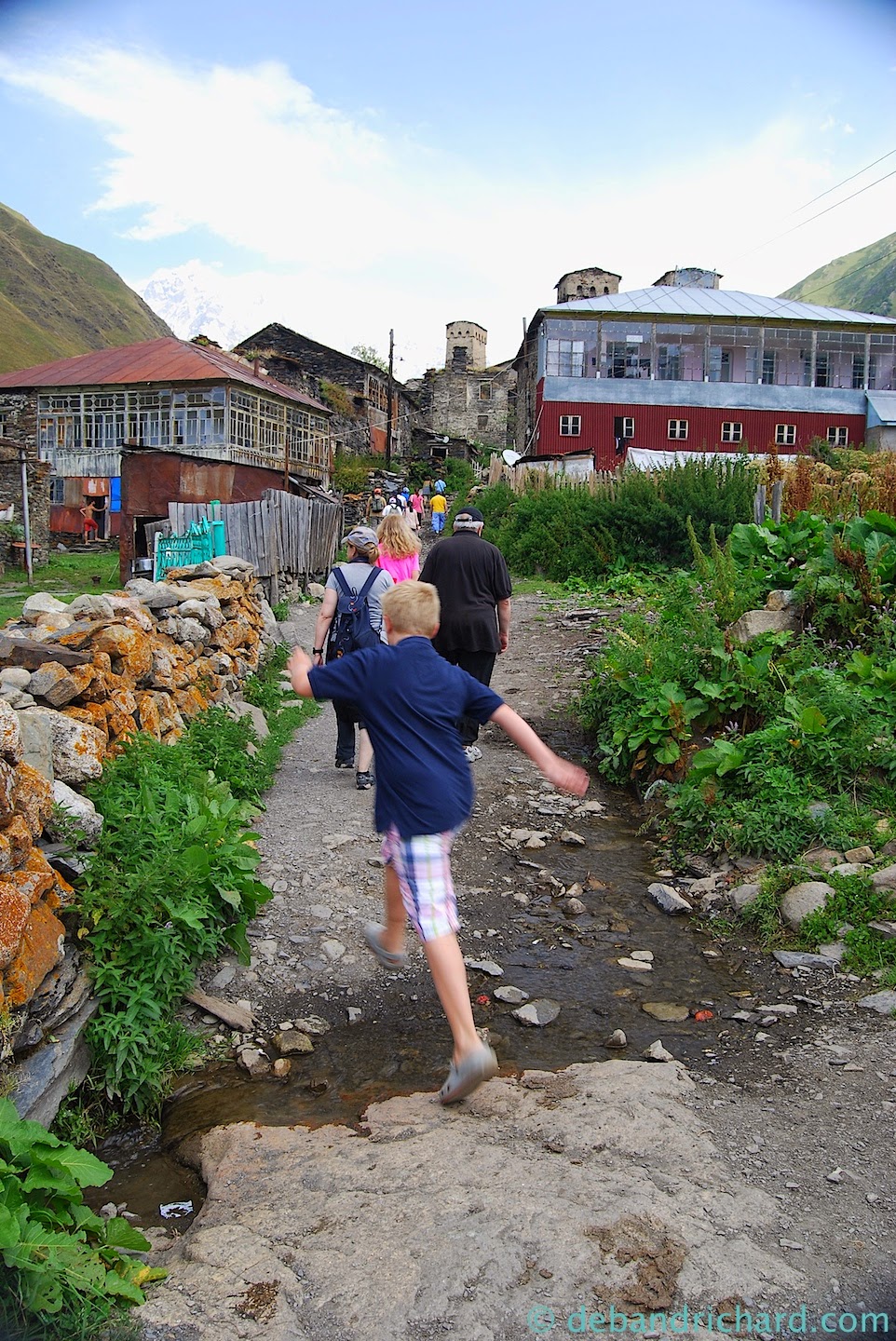 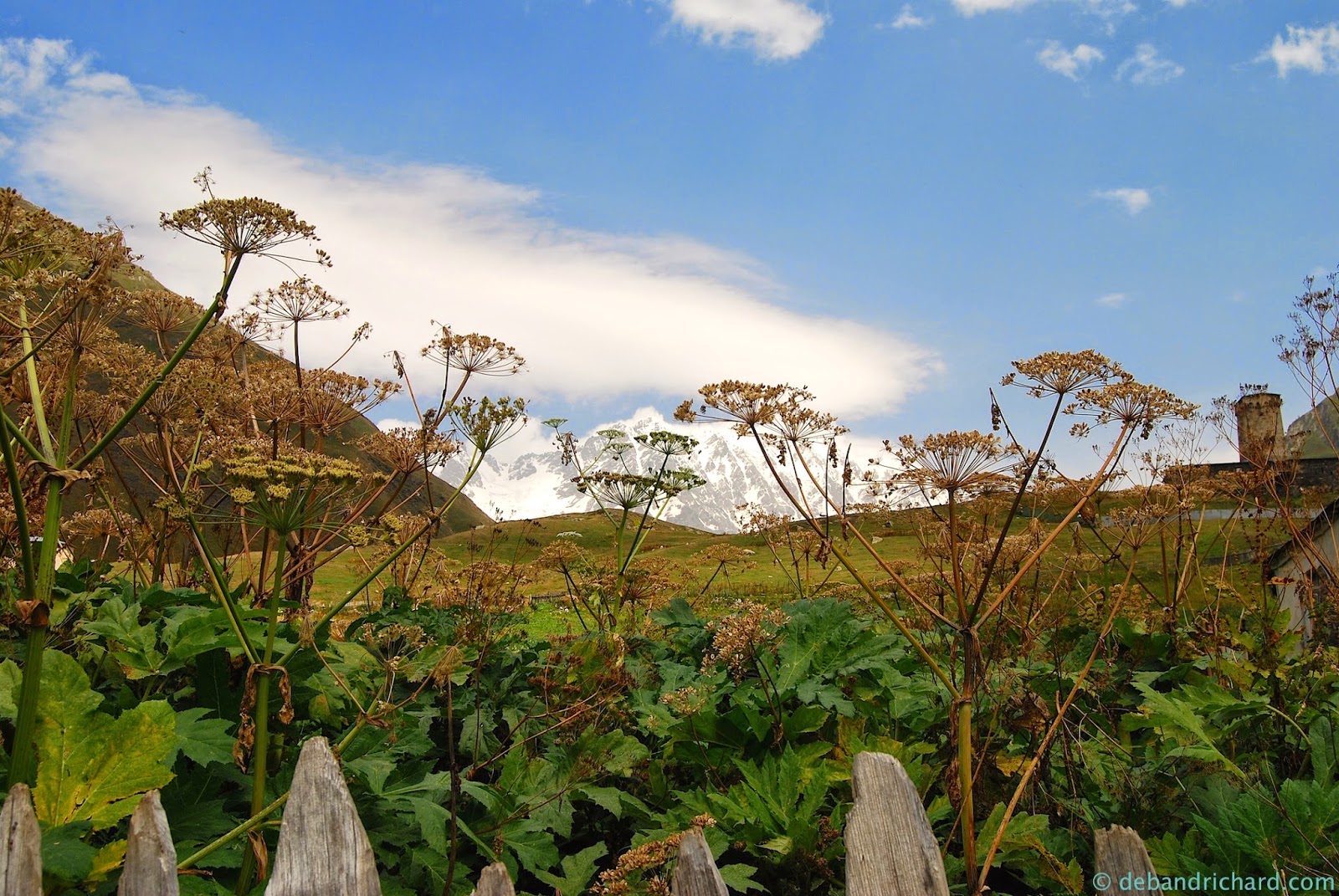 A closer view of the apparently shy Shkhara mountain hiding behind the clouds now. Note the cows grazing on the hill. 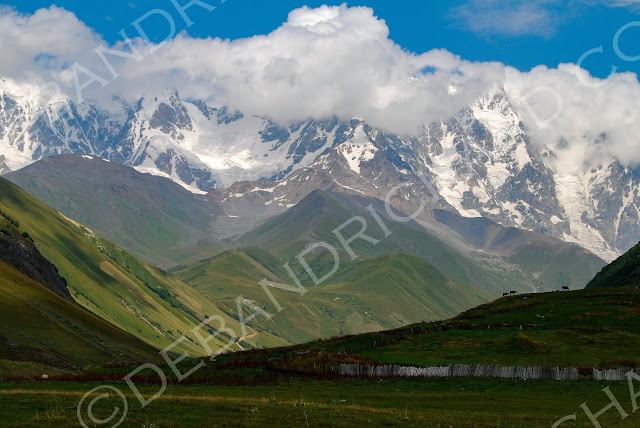 We visited the Ushguli chapel that overlooks the city. It was built in the 12th century. I failed to get a photo of the church, but it seems every Georgian Orthodox church we have visited has a set of three bells. We've heard the bells rung a number of times but I've never gotten a good picture of them.  I love this shot with the stone wall and Shkhara mountain in the background (also note the wine making grapes design on the bells). 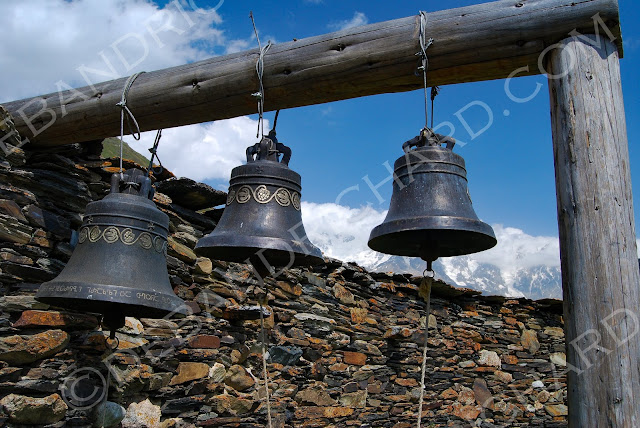 After we had lunch, we began heading back to Mestia for the night (remember, its another 3 hour drive to get back those 35 km). On the way we made one last stop at the church of St. Kvirike and St. Ivlita. The church is located 1.1 km off the road according to the sign at the entrance of the trail. 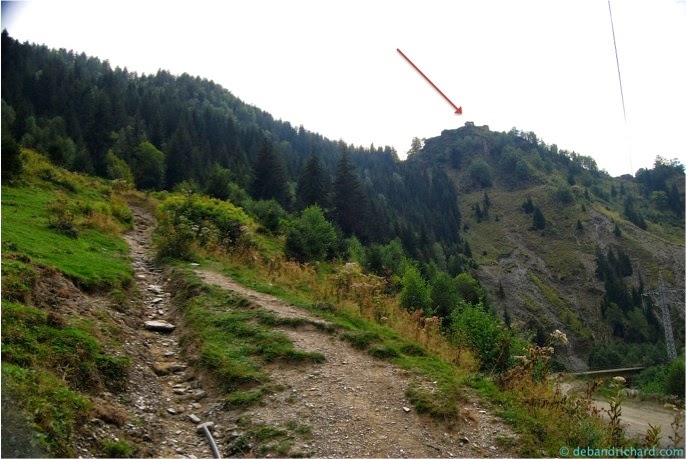 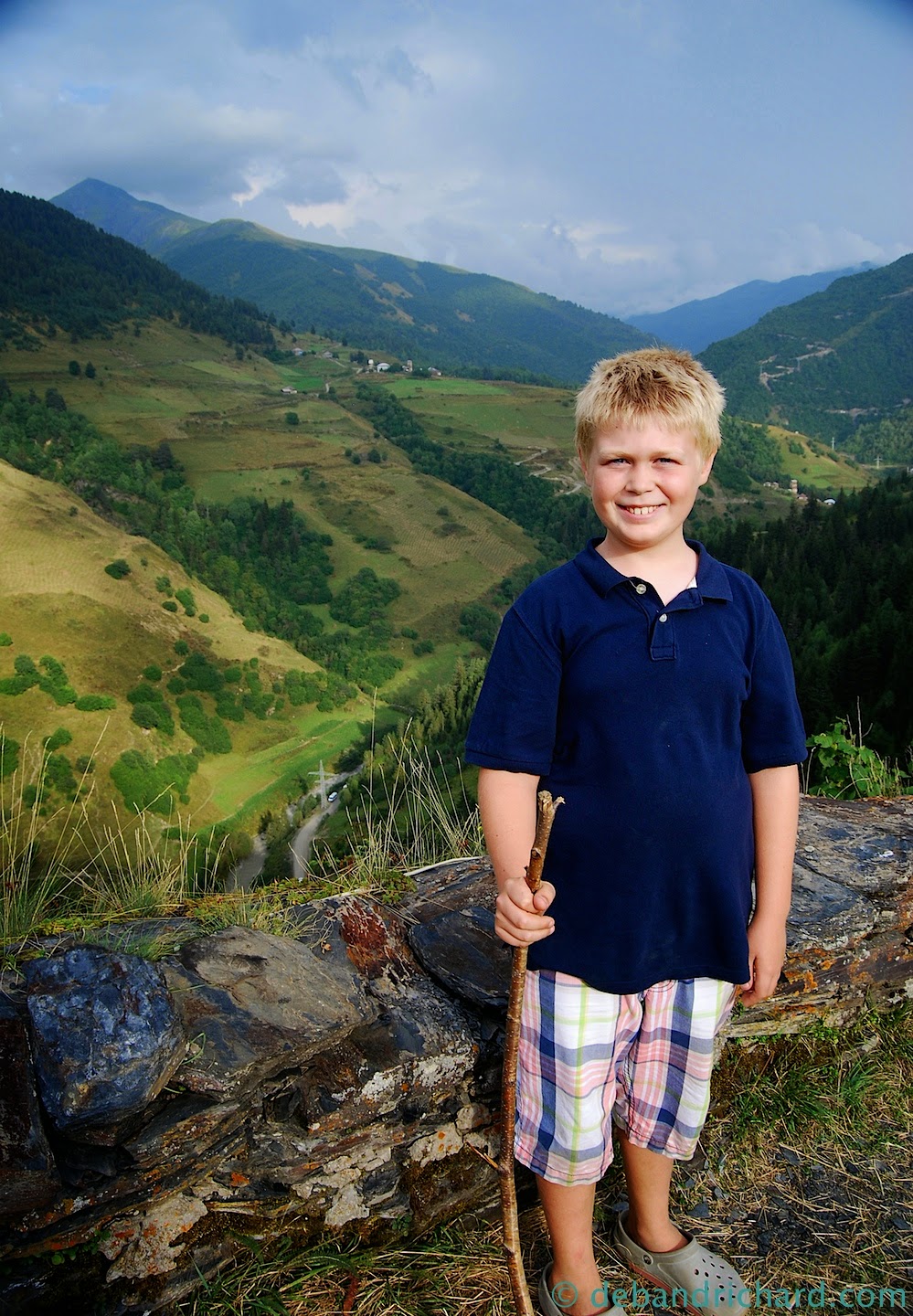 See those two little white specks parked on the side of the road toward the center of the picture, that's the vans we were riding in. It was real sweet. Some of the older individuals heard Mason yell "yay, I made it" and he motivated them to not give up and keep on going. I was very proud of Mason for not giving up and making it up the mountain!  That night when we got back to our villa, we both slept good!
Posted by Deb at 8:06 PM