Over St. Mary's Day and Labor Day weekend, Mason and I signed up for a trip to Svaneti (a province in Northwest Georgia). Due to all the hiking, the trip was not recommended for kids under 6, so Richard had a daddy/daughter weekend with Clarissa while we were gone (and will possibly take the trip next year). Given Mason and I took over 700 pictures, I have decided to split the trip into multiple posts.

The majority of the first day of the trip was spent driving from Tbilisi to Mestia (the town we stayed in). It is a 430 km drive, that takes about 8 hours with no stops. So it was broken up a bit with some stops along the way.

The first stop was the city Zugdidi, which is located in the province of Samegrelo. The Samegrelo area really reminds me of the Florida keys a bit, with raised houses, outdoor stairs/porches, tropical flora (palm trees and blooming flowers) and lots of sun and humidity.

In Zugdidi, we visited Dadianis' Palace. Unfortunately, the palace was closed and we were unable to see one of three copies of Napoleon's death mask and a shroud of Mary (among other archeological finds). 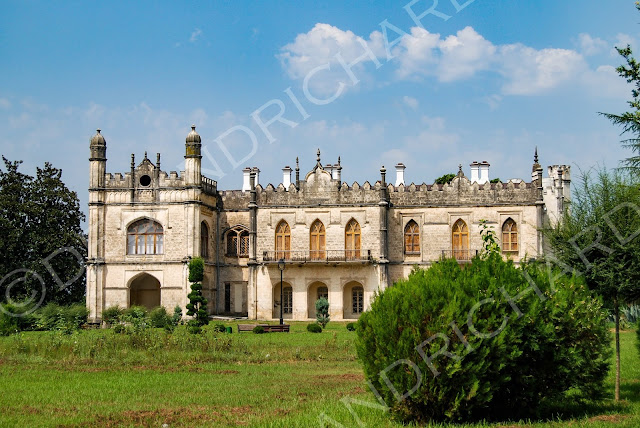 The Dadiani family built the Queen's Palace (above), Niko's Palace, Nobel's church and a decorative garden. The palace was built in the mid 1800s. The Dadiani family collected many artifacts and in 1921 the property was turned into a museum. 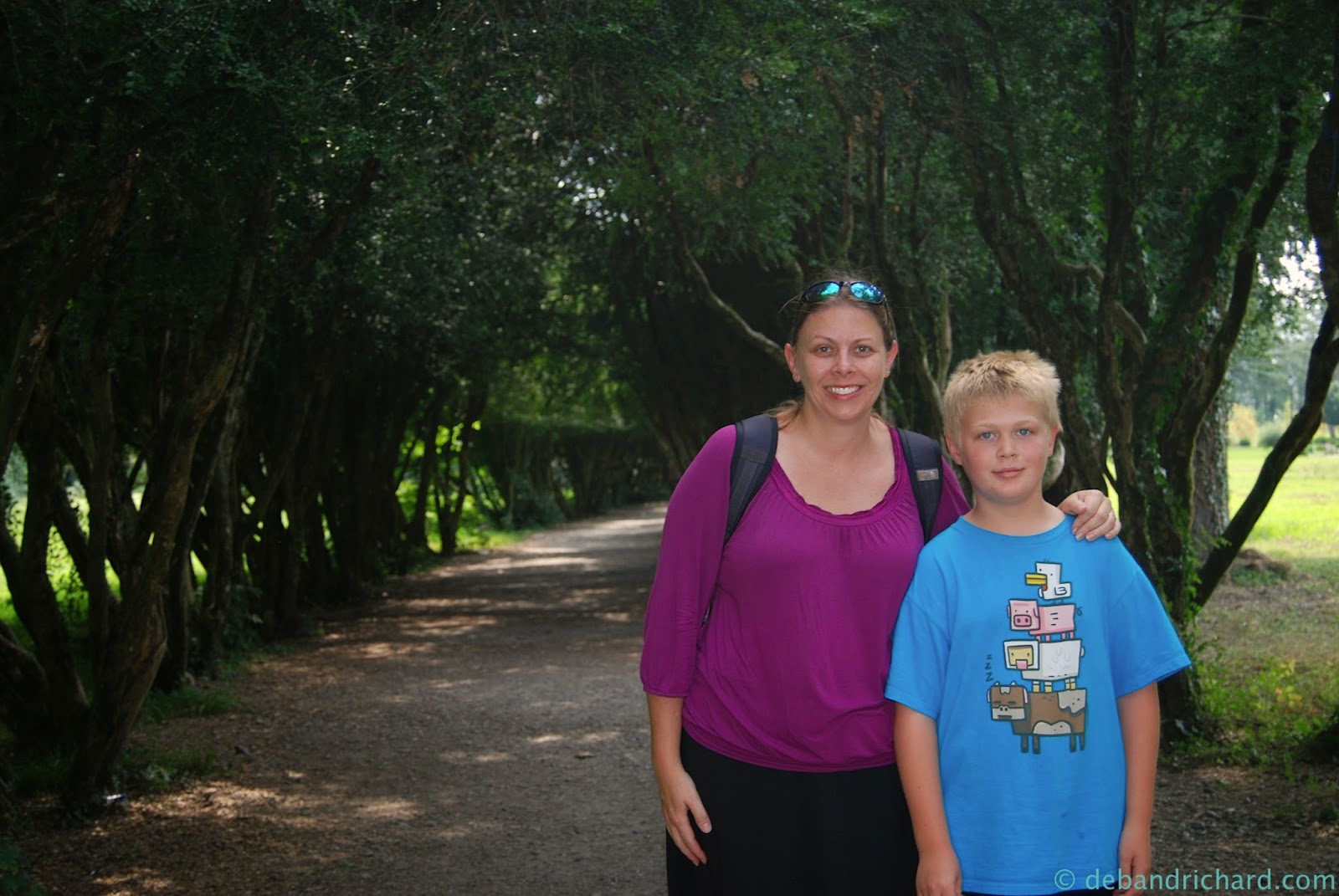 Mason and I walked through the shaded gardens and exited the ornate gates. 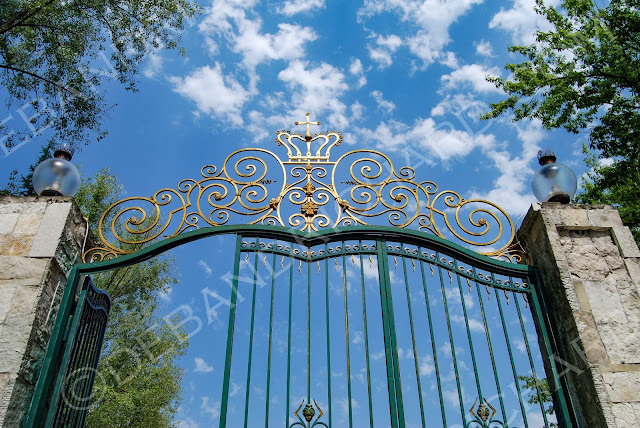 Next we stopped at the Inguri Dam. Inguri Dam is the largest dam in the Southern Caucasus mountains with a capacity of 1300 MW. Mason and I made many dam jokes.....just because we could. So with no further ado, here are our dam pictures. 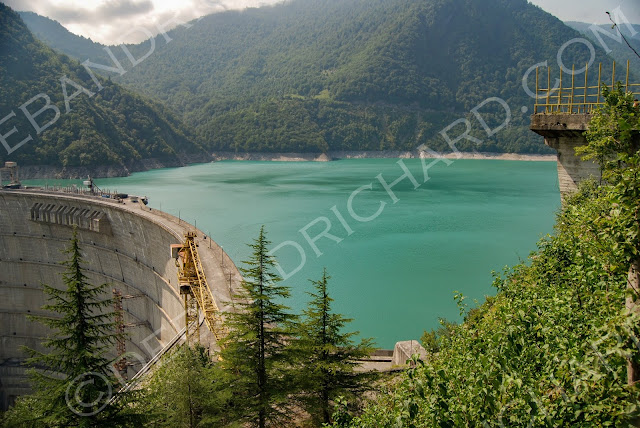 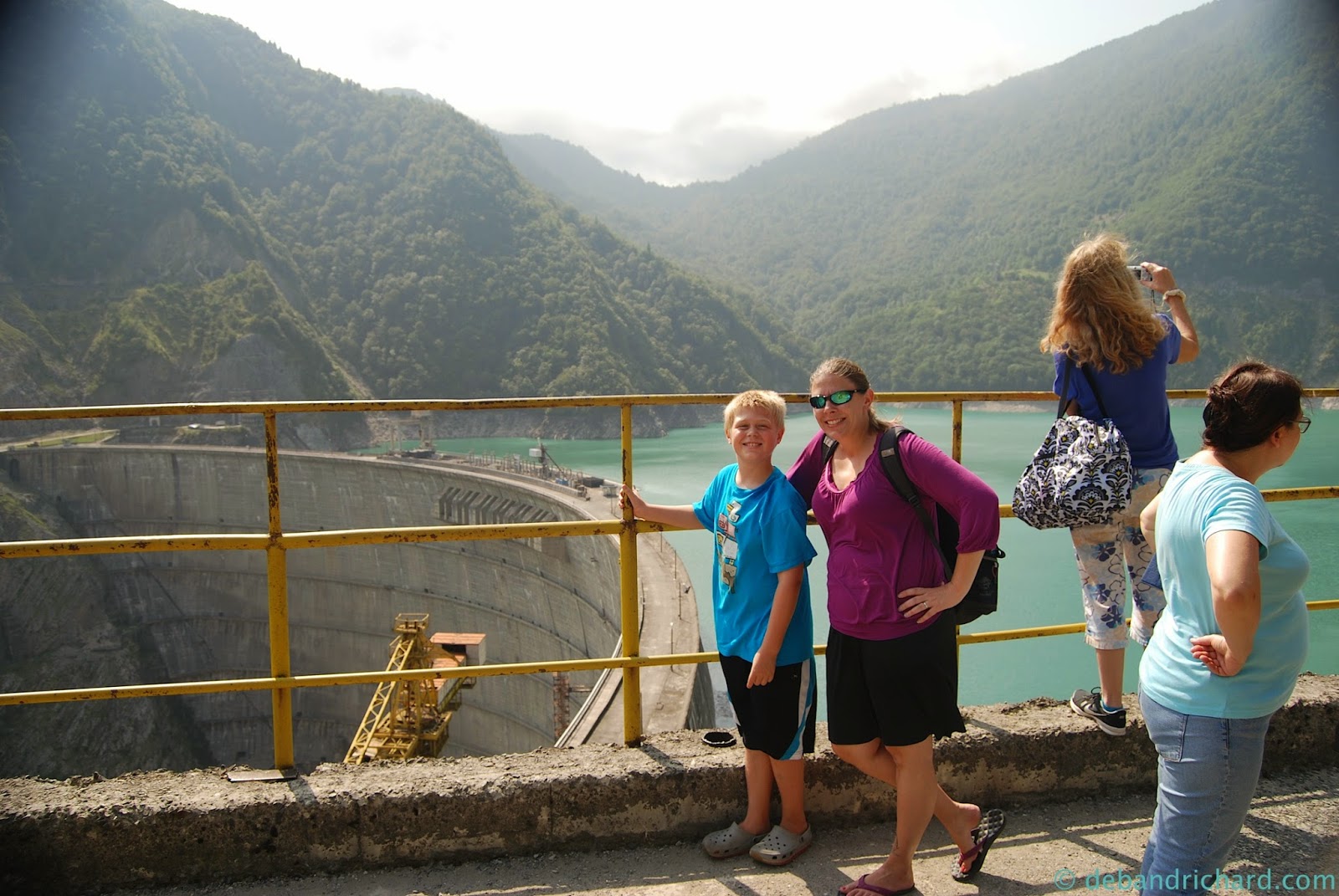 The reservoir was just breathtakingly beautiful. 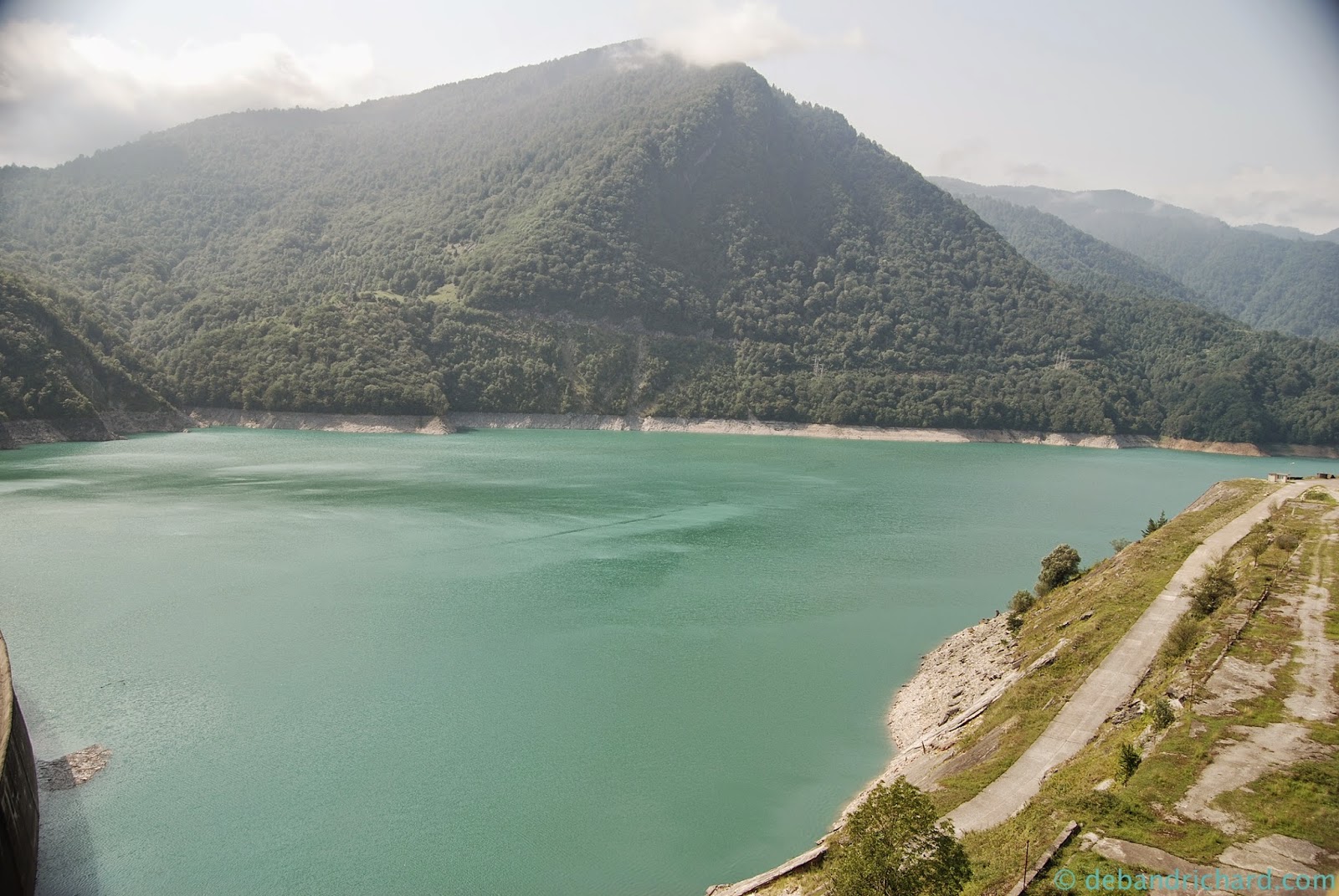 We had lunch at a little restaurant on the side of the road. You can imagine Mason's excitement when the family owning the restaurant had a pig! 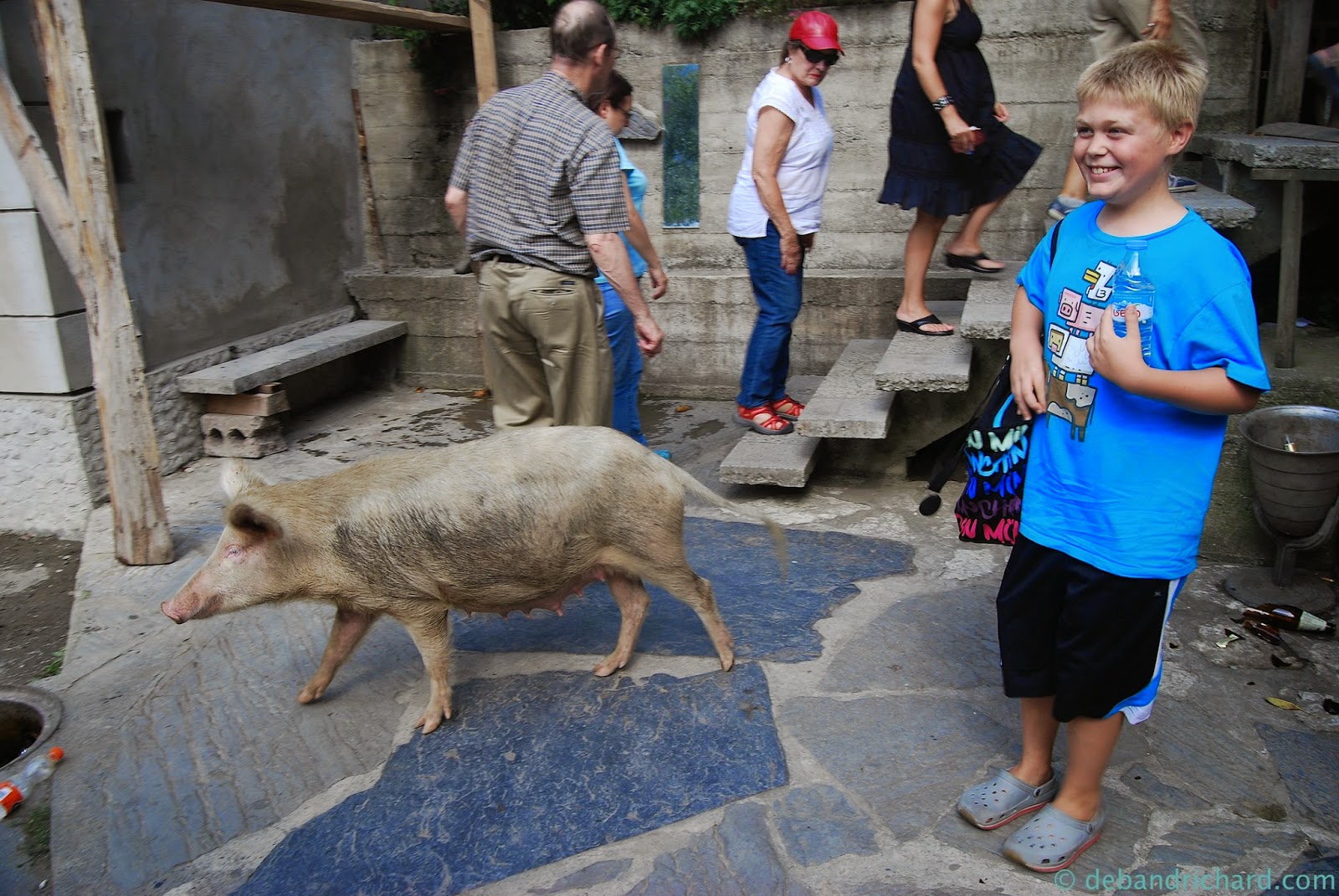 We dined at some tables right next to a waterfall. Talk about some natural air conditioning. It was so nice and cool by the tables. After eating, Mason, being a boy, decided to climb up towards the top of the waterfall. 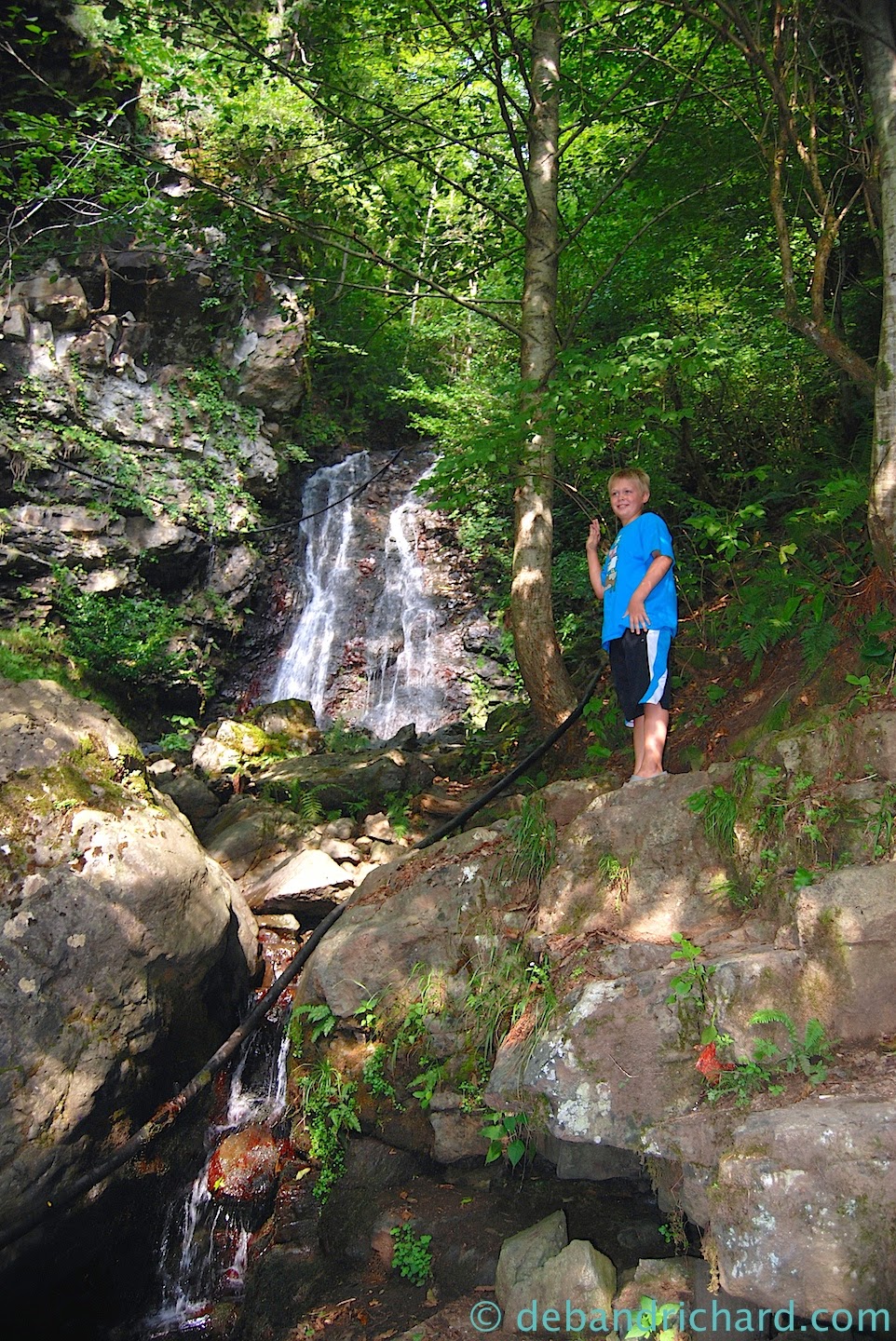 We stopped on the side of the road to view Ushba mountain (which provided a nice stomach calming break for those who were suffering from motion sickness...Mason).  Ushba is not the tallest peak in the mountain range but it is the most picturesque due to having two peaks. 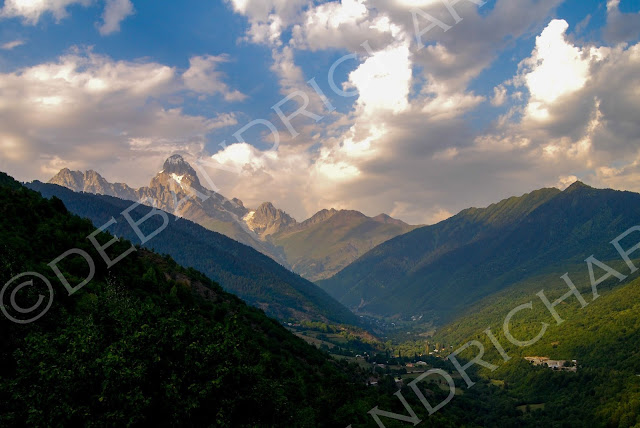 The tallest peak of Ushba (4700 m) is directly behind me, the second peak is to the left in the picture. 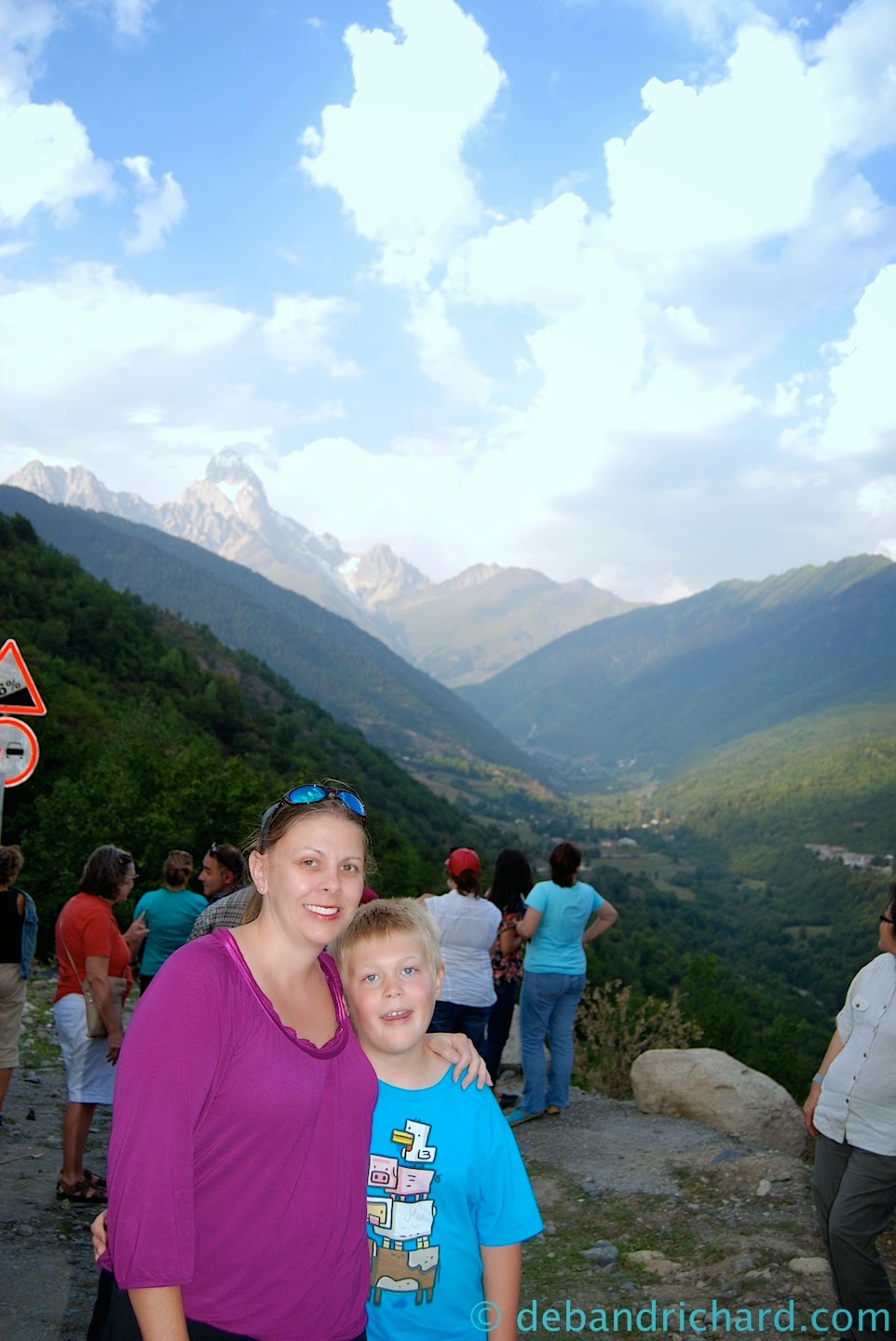 In the village of Latali, there are 63 churches. Some are in ruins, about 25 are small family churches, and most are situated in the mountains (and far off the road). We stopped at the church of the Prophet Ionah (Jonah). This is the only church in the world dedicated to Ionah and there is a commemorative celebration every October 5th. 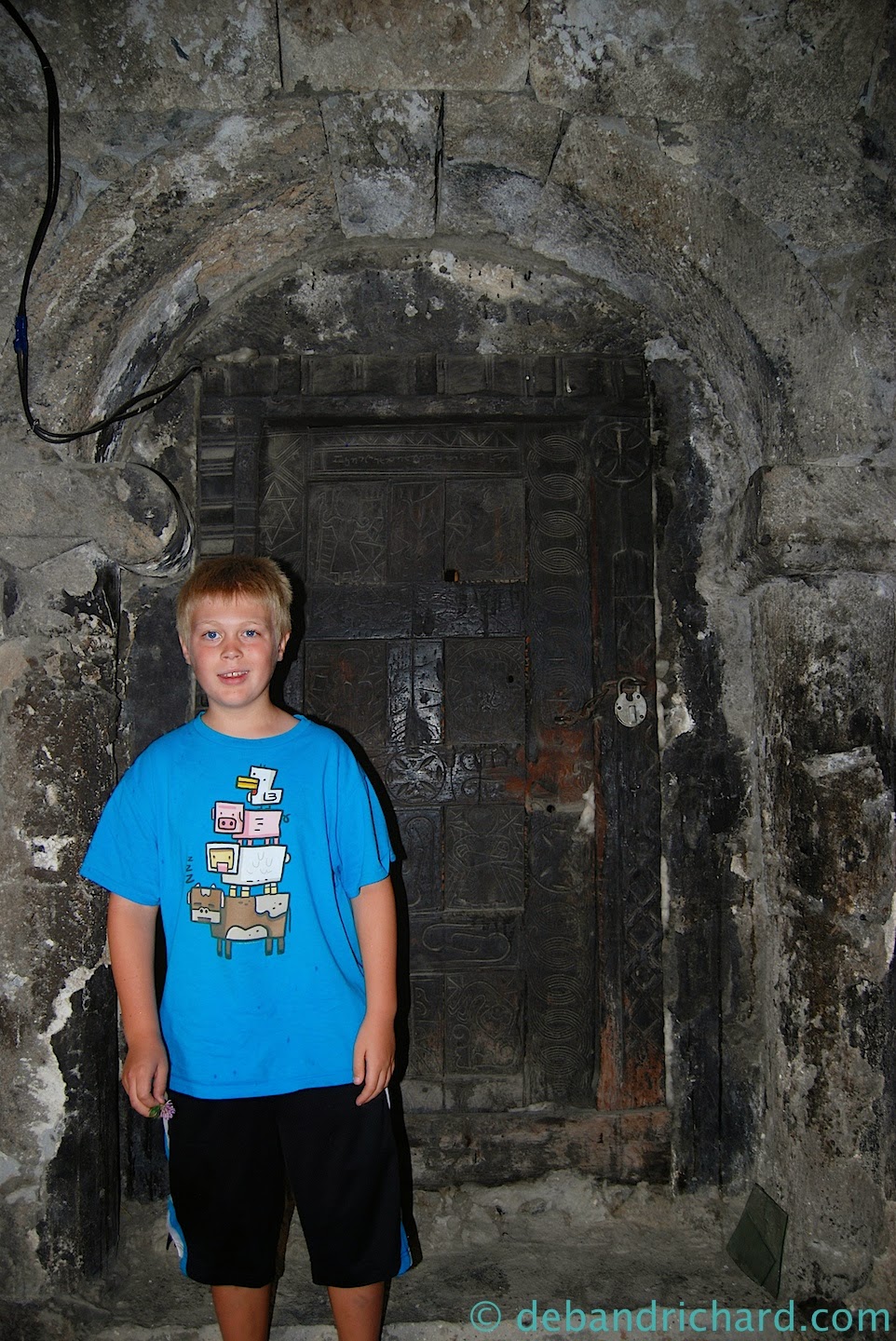 Mason preferred to hide near the church because as we arrived a storm was coming over the mountains. Clouds rolled in with a lot of lightning. I guess being so high up and close to the clouds you could practically feel the lightning. Several bolts struck a mountain adjacent to us (we even saw smoke rising up from one lightning strike). 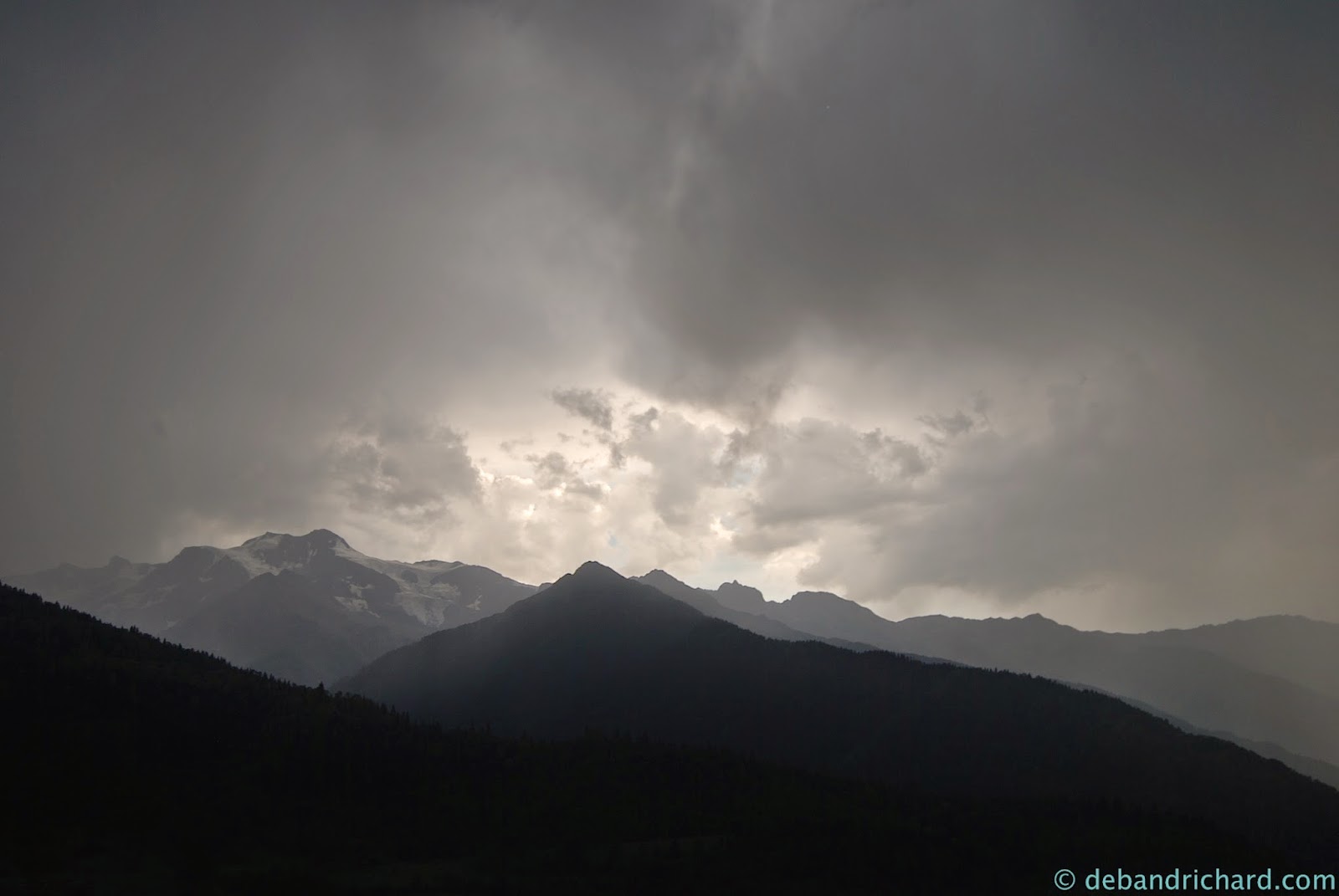 As we continued on our way, we saw a rainbow. I was trying to get a good shot of the rainbow as the road curved back and forth down the mountain (a tricky feat!). So you can imagine my surprise when I got a decent photo of the rainbow (which even appears to be a double rainbow) with a bonus lightning strike! 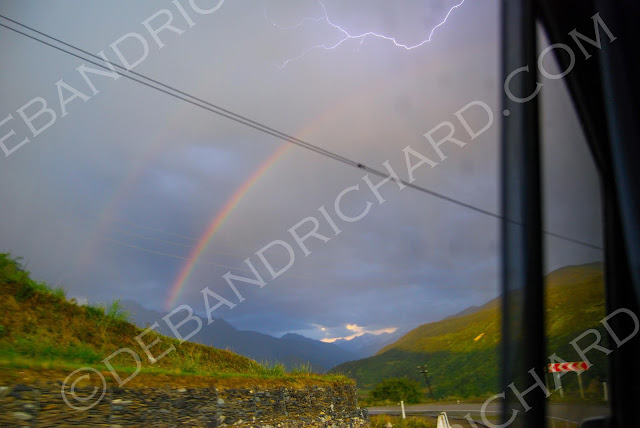 We arrived at our villa in the village of Mestia after dusk, had dinner and went to bed to rest up for the next day.
Posted by Deb at 6:36 PM