So overseas, several troops of Girl Scouts makes up a committee (they are called service units stateside). The committee here in Doha is decent size (about 120 girls), covering nearly every level from first year daisies to first year seniors, and we (in addition to being a troop leader I also volunteered to be a committee member) try to put on a couple committee wide events every year. This gives older and younger girls a chance to interact, leaders a chance to talk with other leaders, and have the girls work together on a big project. One of the leaders of a junior troop organized a day trip out to Purple Island (also known as Al Khor Island or Jazirat bin Ghanim) at the beginning of March.

Purple Island is about an hour drive from our house. The leader had worked out a location with bathrooms and some tents that was also within walking distance of the island for us to use during the day (always a good thing with lots of girls). In the morning, we headed over across a pedestrian bridge to Purple Island for a trash clean up. I can't remember the final committee number but I think it was about 20 bags, some tires, a big metal bar, and a gasoline can. Clarissa was super excited to find a cooking pot with a soda can inside! 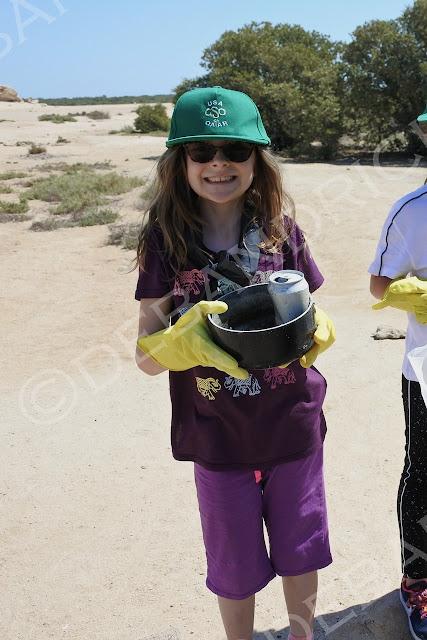 Any way, the event was girl-led and the girls were picking up the trash. I was pulling a wagon with water bottles. So I may or may not have gotten distracted by the scenery and just took pictures while they were cleaning up! 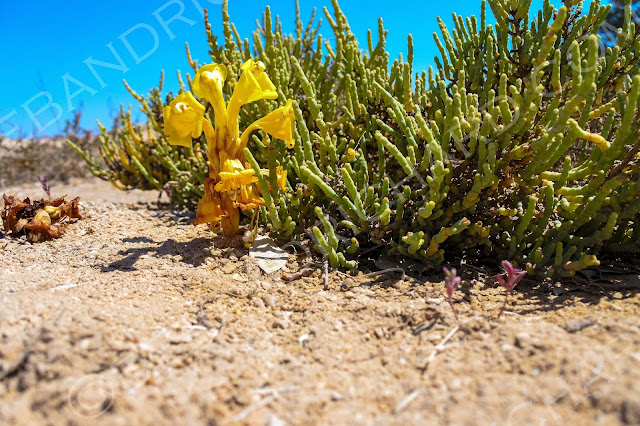 This yellow beauty is the desert hyacinth (Cistanche tubulosa). It is a parasitic plant. The desert hyacinth doesn't have any chlorophyll and steals water and nutrients from other plants. In the top picture, it is parasitizing the green glasswort (Arthrocnemum macrostachyum). 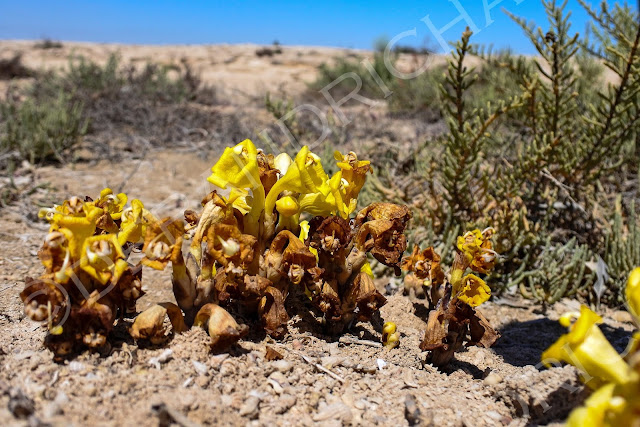 Beautiful purple sea lavender (Limonium axillare) blooming. Contrary to what you may be thinking, Purple Island did not get its name from the sea lavender. The name comes from the Kassite period on the island (1400 to 1100 BC) when a purple shellfish dye was obtained from the Murex snail. What color purple? Think of the Qatari flag....that color! 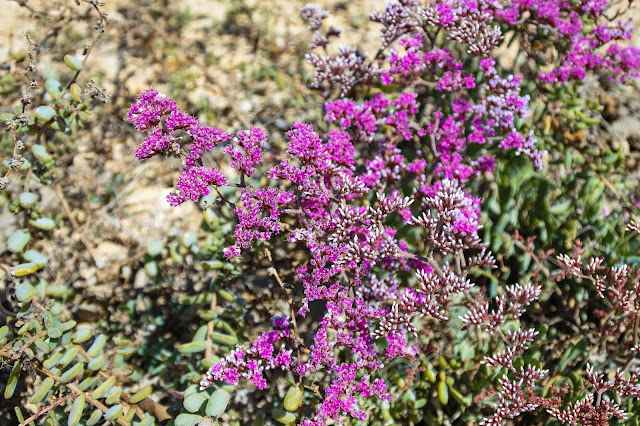 A friendly little Talon crab, also called a mottled lightfoot crab, (Grapsus albolineatus) scurried across the hot sand. The girls stopped picking up trash for a bit to check it out. We were working on our Marine Life Badge after all. 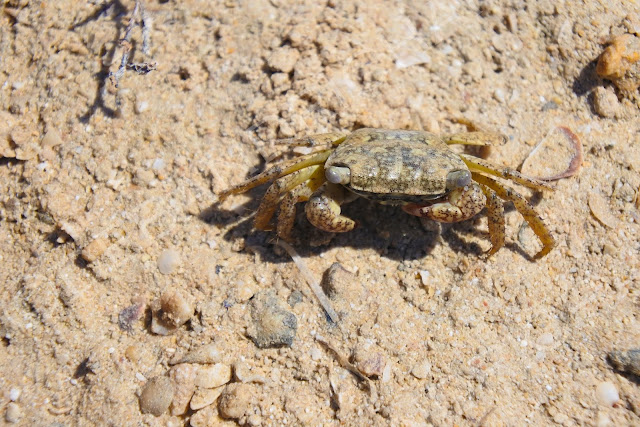 An unusual rock formation on the island. As I mentioned with the purple dye, the island has be inhabited off and on. Archeological digs have found evidence of some possible Neolithic inhabitants used the island as a campsite (around 4500 BC). Some pottery suggests suggests the island was also inhabited by a Bahrain-based civilization (2000 to 1750 BC). 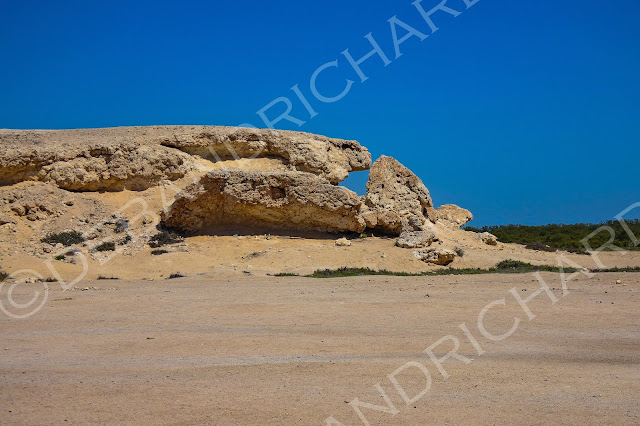 Back at the property we were staying at, there were some other neat plants. Near the restroom, I found the flowers of a date palm tree (Phoenix dactylifera). I'm 97% sure these are male flowers. Had I realized there were male and female date palm trees with different flowers, I would have looked closer when I saw them and not tried to distinguish just from a photo. 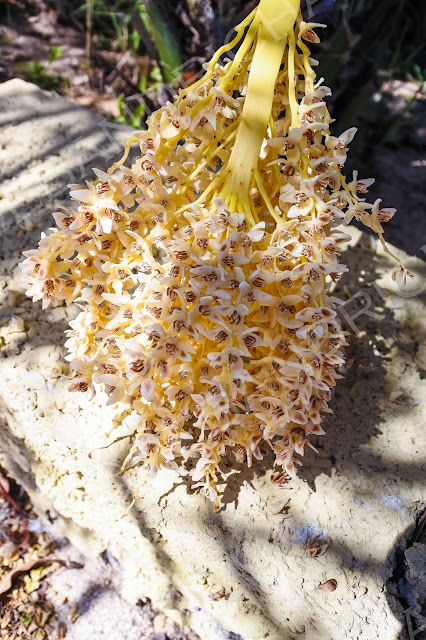 These are some fruits (Kanar) ripening on a Sidra tree (Ziziphus spina-christi). The Sidra tree is a very symbolic tree in Qatar (there is a hospital named after it, they designed their convention center after it). 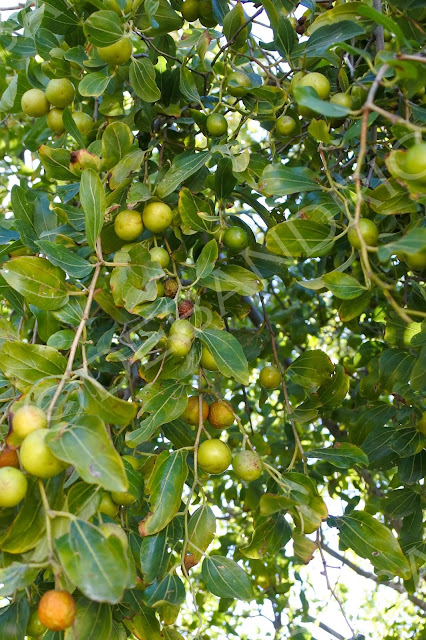 After we returned to the property, we had lunch, finished up some badge work, we let the girls have some downtime as we did some celestial badge work (only one person can look through the telescope at a time), they did SWAPs, we built fires and learned to put them out, we ate dinner (which was not soon enough apparently), and of course made S'mores. I think they all had a great day, I know I enjoyed the day in the sun. 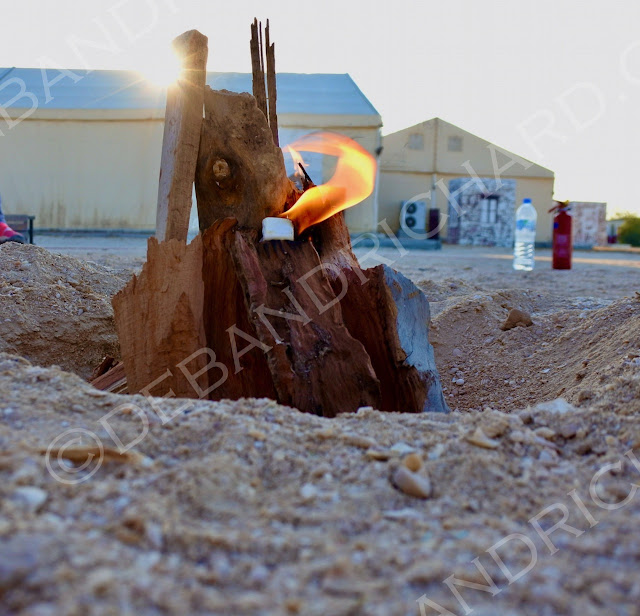