So a few weeks back, I mentioned I may have been a movie extra....well confession time....I may have given some bogus details then....here's the real deal!! The Film Fiji (ie the gov't film commission...who knew!) has been doing a great job in recent years at attracting production companies to Fiji. While we were posted there three seasons of Survivor were filmed (and I think they are still filming there), Wrecked Season 2 was filmed (we witnessed a couple scenes being filmed when we went away to a resort one weekend and went on snorkel trip with some of the production team...and personally I know one of the high profile extras) and Season 3 was starting filming when were leaving. Just after we left (ie we heard the calls for extras but couldn't apply) three more movies were filmed there - The Other Side of Heaven 2 and the Hallmark Movies A Summer to Remember and Pearl in Paradise! Those last three were all made for TV movies....but one major motion picture filmed while we were there was Adrift with Shailene Woodley and Sam Claflin!

As usual, there was a call for extras. Fiji has rather stringent work visa laws (why I didn't work outside the Embassy while posted there). Though part of the process of applying for our long term residency visas included getting a TIN number for everyone. So when the casting crew called for extras they said you must have a TIN number....hmmm. So I talked to HR at the Embassy to verify visa requirements and given extras typically make peanuts they were okay with applying. Mason having always been a big movie buff and has toyed with being the "next Steven Spielberg" he really wanted to be an extra. Clarissa on the other hand hates strangers taking her picture....so she had no interest what-so-ever. So we went and applied, had measurements and photos taken....and got the call for a day of filming!! So we marked the calendar. 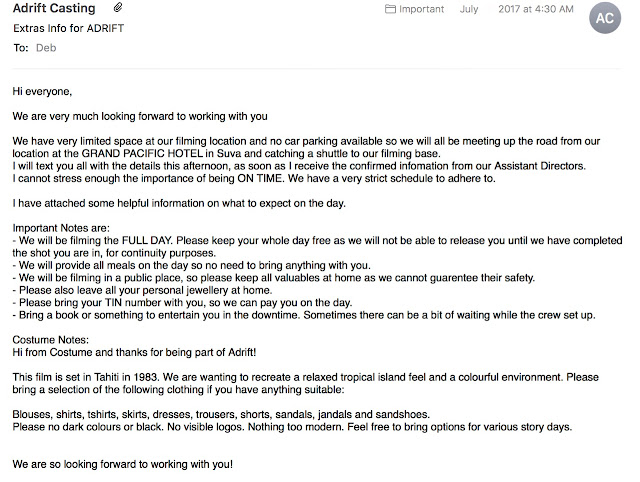 We also received a two page pdf of things were were not allowed to do or bring with us! In the mean time, Mason came down with pneumonia! Full blown getting chest x-rays, out of school for a week, on antibiotics pneumonia! So I did what any good mother would do....said rest all day, lunch is in the fridge, call Richard if you need anything....and I went to be an extra!! The instructions said to come to set with clean dry hair and no make up (and deodorant....I thought that was funny it had to remind people to wear deodorant). We were inspected by the head of the extra crew, some people were sent to costume, while a few of us were lucky enough to get sent to make up first. It took about an hour of magic and viola.... 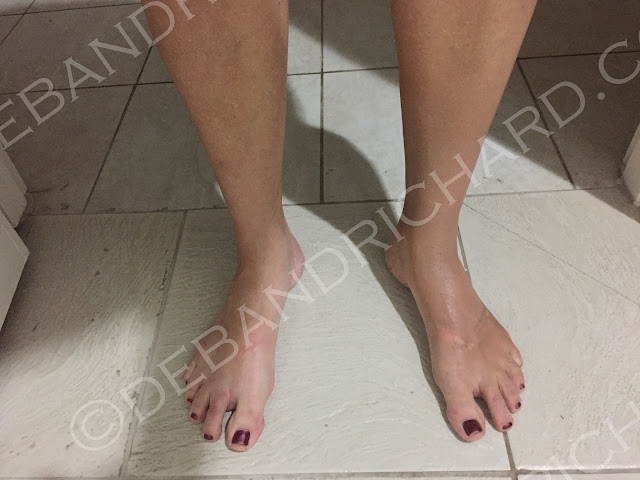 all my tattoos were gone! I had been a bit excited to get some 1980s style eyeshadow and big hair...but no....the only make up put on us lowly extras was to cover-up tattoos. They did a really good job - though you can see some starting to come off after 12 hours (I took this at home...I was good and followed directions and didn't take my phone on set). I was there for 11 hours and made a $100FJD (a little less than $50US) and was in the background for 3 scenes. The first scene shot is where 'Tami' is writing her mom a postcard in a little local cafe. Us extras were mulling around in back like tourists, but the way it was shot/edited you don't really see anything outside the cafe. Shailene did a wardrobe change and another take was done and either that was completely cut out or they really adjusted the lighting and it was the scene at the beginning where she is eating in the little cafe. Again you can't see anything outside the cafe. What is "funny" is initially me and another extra were pulled into the cafe and told that we would be handed a plate of food, then we would walk to a table and sit down. Then they decided it needed to be more of a locals cafe (not a tourist cafe), so we were swapped out for some Fijian extras....sigh...

The second scene shot (and the majority of the day....as in about 6 hours total, we even broke for lunch and came back to the same scene) was Tami & Richard - the main characters - shopping in the market. They gave us shopping bags, I got some flowers (I was at the market after all), they also put a frangipani in my hair and were suppose to just act like we were shopping at the market. On one of the takes, I accidentally hit (and naturally apologized when we were resetting) Shailene with my flowers. Given this scene was shot for so long, from three camera angles, and I was so close to the main characters if I was going to make it in the movie....this is the scene that would provide me with my 0.3 second of fame! 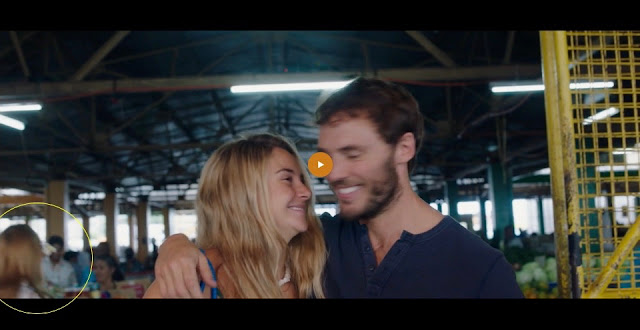 Look there I am....totally recognize the back of my head don't you!! Lol. I joked with Richard that one of the camera angles the camera man was literally right behind me...I was all they are going to use that one and my butt will ginormous on the big screen and just to make Shailene's butt look tiny! Thankfully it's just the back of my head! So all in all, I think the back of my head got about 4 seconds of screen time - enough for me to get two screen grabs in different spots!

At lunch, I sat a table with Jeffrey Thomas (he is the older gentleman in the next screen grab). He was a friendly fellow. I felt so bad for the guy with the bananas. Our reset points (ie after every take we went back to the exact same starting point and then did the exact same thing) were right next to each other. His arms/back were so tired by the end of the day and the banana bunch had definitely seen better days (some smushed, others dangling off).

After the market scene was done shooting those of us in "highly visible" areas had to go change into new outfits for another shot to be filmed. This last shot only took one take! I was standing with two other ladies so this may be me in the middle (it is quite hard to tell, lol). This was shot at rush hour and the bus station was packed. They had us extras stand/walking closest to the sidewalk/road to "block" the modern clothing of the locals (as well as draw attention away from the phones and tablets they were holding up and taking pictures/videos with). I understand aperture settings and depth of field, but I'm still pretty amazed that it blocked out so well! 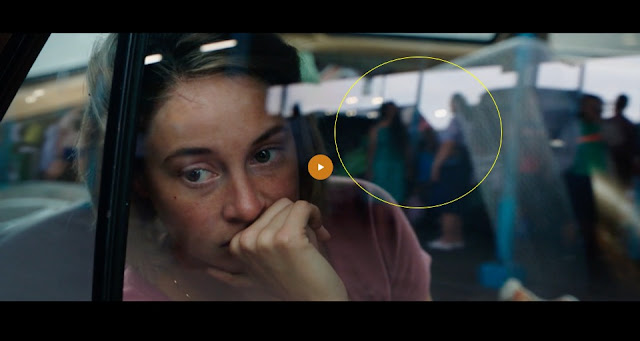 All in all, it was super fun to be an uncredited extra. It has also been fun to watch the movie and look for friends/acquaintances I know from Fiji that were extras in the movie too. If you haven't seen it yet, I highly recommend the movie Adrift....not only does it give you a glimpse of what Suva looks like (I took dive boats out the "marina" used in the movie), it is a very moving film...based on a true story!
Posted by Deb at 1:14 PM