Our next adventure has started.....

So I worked hard and got all caught up on the blog about the fun we'd had during home leave and training, then all our household effects (HHE) from Fiji arrived and we were swimming in boxes....so blogging took the backseat. We have a little more HHE coming from the states (we didn't use all our allotted weight despite buying lots of hand carved wooden artwork). Our supplemental HHE is set to arrive in country later this week (not sure how long customs will take) and our car just arrived and is waiting on delivery/plates. So I thought I would take this little lull to update.

I had put some fabric I picked up in Fiji and my staple gun in our UAB (air shipment) and covered our kitchen chairs. Beyond the regular wear and tear, we will be charged for damages made to the embassy furniture we are issued. So kids + light colored seats + food.....covering was a natural decision (we had put a towel down on Clarissa's chair at our last post, but she's too big for that now).


It's been hot here....duh Deb you live in the desert. Oddly enough, it is not like the "dry heat" in the hot deserts of US Southwest. We have humid desert here. So at bus stop time (ie early am), temps are usually mid-90s (mid 30sC) with 50-70% humidity...which makes it feel like 110-120F.... It is like stepping into an oven when you walk outside. Speaking of ovens....no more easy-bake oven for me!  Our oven is American size!! 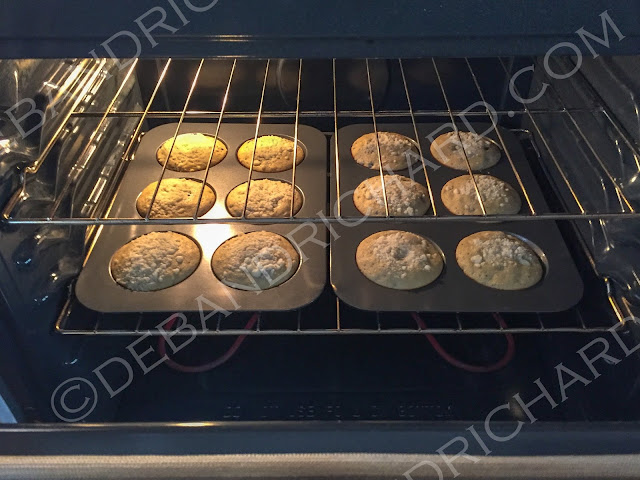 We keep hearing that in about 1.5-2 months the weather will cool down and be wonderful. Waiting for that! In the mean time, we've gone to the neighborhood pool (which cools the water). 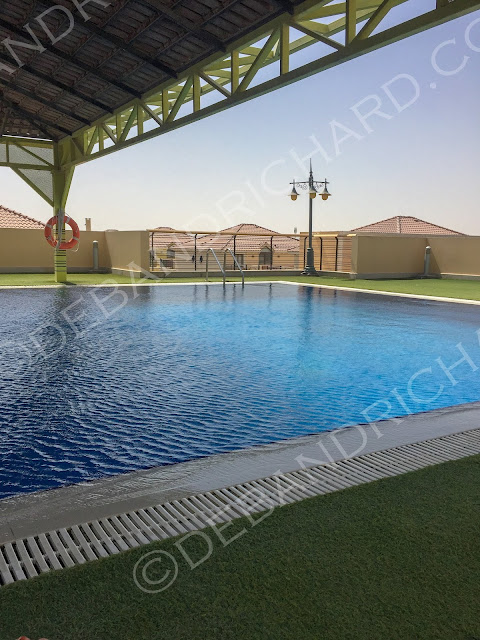 This is not quite half of the pool. It is great that a large portion of it is covered and there are wonderful views as it is on the roof of the neighborhood clubhouse.

Richard and I have both done some tours of the Souq Waqif (standing market)....I'll give those their own post. The company that did the tours offers lots of other fun things...we are just waiting on the weather to cool down a smidge! As you saw Monday, we had a fun little photo shoot with Isa and some American Girl glasses....while this one is not the most focused I think it portrays her feelings towards the photo shoot. 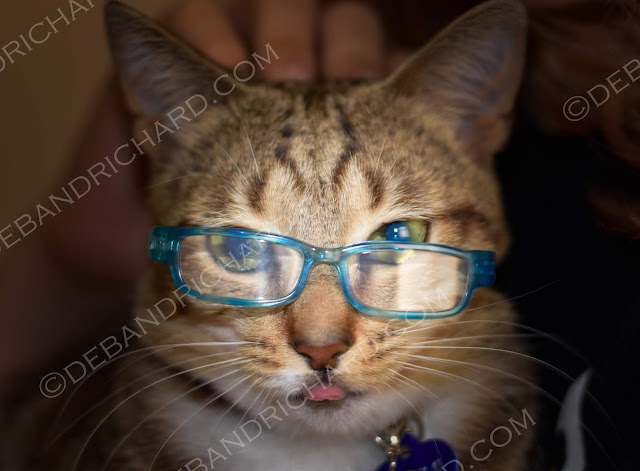 Another way to entertain ones self in stifling heat, is to head to the mall. To which there are plenty to choose from. We've gone to four different ones so far (some multiple times, as a grocery store tends to be attached to the mall). The mall that go the most "whoa's" so far has been Villaggio Mall. When you step inside, it suddenly feels as if you are in Venice, Italy....complete with a canal and gondolas. So naturally, we had to take a ride! 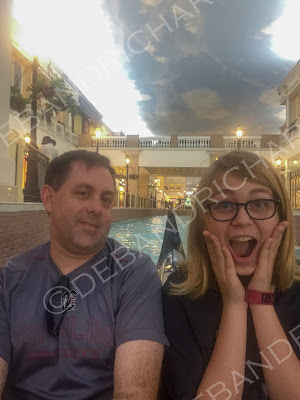 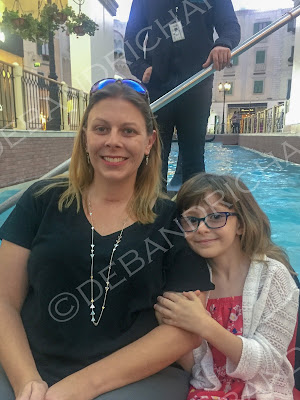 There are little bridges you can cross over the water and ceiling is painted blue with fluffy clouds. We spent hours there and when we walked outside to complete darkness it messed with our minds...lol. 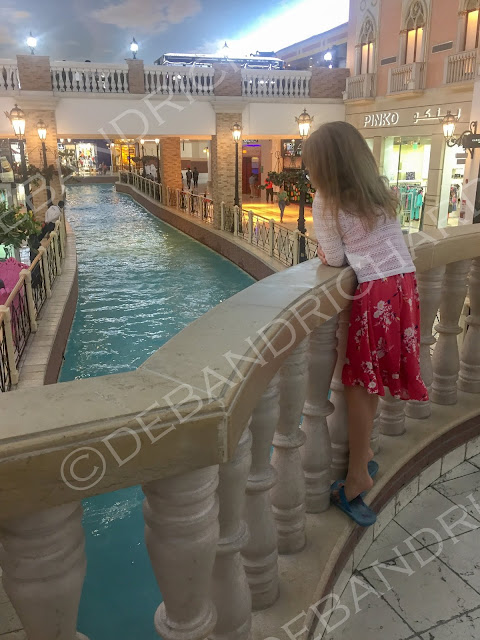 We had to take care of some cell phone/internet business. So we found our way to that shop. What should happen to right around the corner from there? Gondolania Theme Park ....a theme park/carnival inside the mall!! 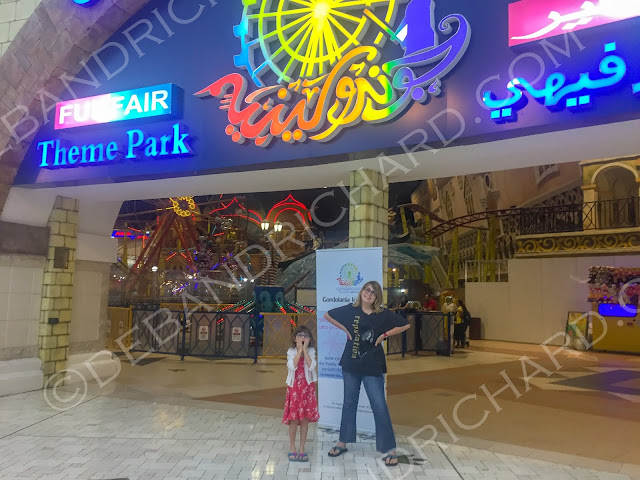 Kids were amazed to see the bright lights and rides...and since we had an afternoon to pass....we said why not and went on in to ride the rides!! Clarissa had fun driving a pink swan around a little lagoon while Mason and Richard went on a full fledged roller coaster (you can barely see some of the track going along the building facades as well as past the entrance). 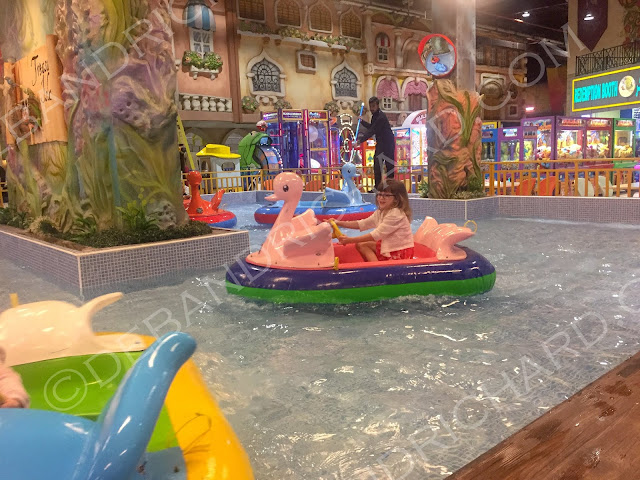 Both kids rode on a little "under the sea" lazy river ride. We then rode the bumper cars, I think we did those two or three times in a row....super fun. We ran into each other a lot, but culturally we weren't sure how it would be taken to ram a complete stranger....so I just said to Clarissa we were racing them...lol. 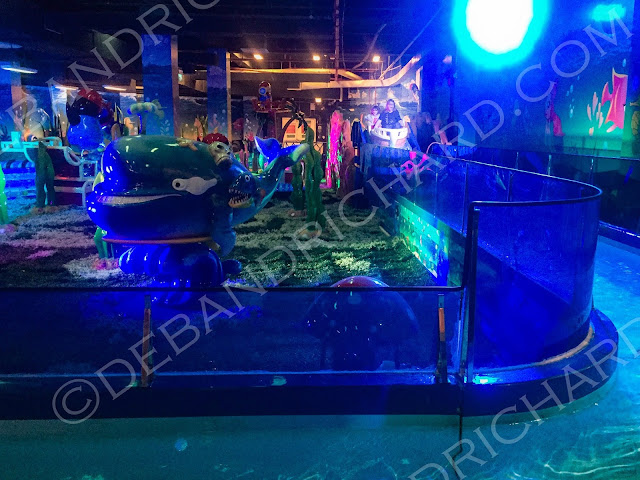 Clarissa and I rode on the ferris wheel (here's a not so flattering selfie but it shows how high up it went and all the fun below us). 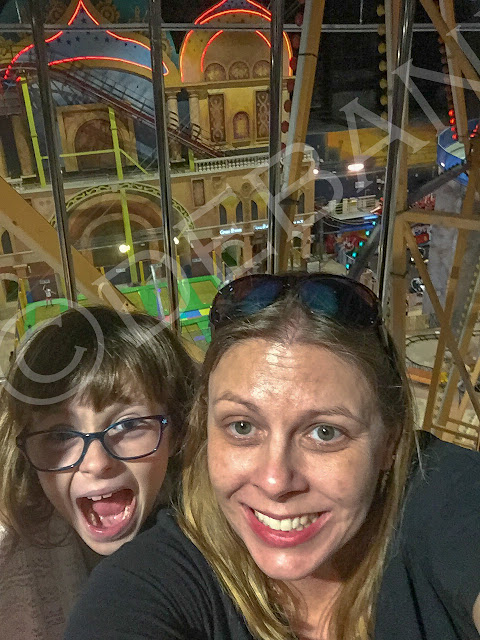 While we were on the ferris wheel, Mason and Richard rode the 'drop ride'. We happened to stopped near the top to load/unload people while they were riding....so we had an awesome vantage point to shoot a little video. There are the only two on the right hand side of the drop.


As I mentioned, we don't quite have our car yet (it arrived in country around midnight last night...not that we've been stalking it or anything). So we've mastered Uber (even let Mason Uber home from school one day), we are enjoying life with food delivery (there is an app called Talabat that allows you to order from practically every restaurant....at times it takes longer to decide where to get your food from than it takes to actually get said food!), and finally we have been busy with all the start of the school year events from new student orientation, meet the teachers, back to school night (just learning about the curriculum/grading methodology), and back to school coffees.....wooh! I get tired writing all that and thinking about all the things we've gone too. For the middle school new student orientation, they talked to everyone, then the middle schoolers went off for a tour while us parents got some more talking, finally we got a tour. Given Clarissa's orientation was right after the middle school one, she was with us....it appears she took a bit too much pleasure invading Mason's locker. 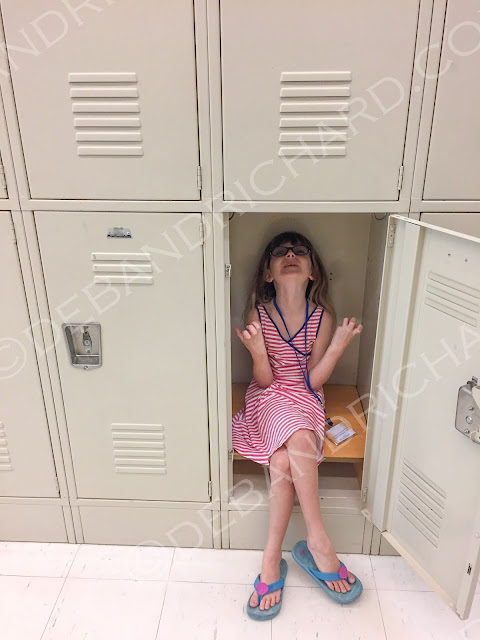 So nothing out of the ordinary here....just getting up, going to work/school/unpacking, and then doing it all over again. Same routine, just a different country!
Posted by Deb at 11:56 AM