Through Hell Fire and High Water....

We had made it to our last weekend in Fiji. Both kids were away at final sleepovers at friend's houses. We were packing up all our suitcases and cleaning the house (otherwise we'll get charged). Richard and I went out to breakfast as we were walking back home (remember the car is sold....sigh). We start talking about the weather....another tropical cyclone was making it's way towards Fiji, following almost the exact same track was TC Josie had the weekend before. The ground is beyond saturated and when the outer bands started dumping rain on Fiji, the flooding began again. So we called our driver to get his opinion....should we go ahead and get to Nadi a day early in case flooding causes some roads to close. We got a big ole YES! So we start calling around and everything was completely booked up. So then we look at changing our ticket to fly out a day earlier. That was doable! We got approval from the appropriate people, bumped up our house inspection a day, and I suddenly lost 24 hours of packing time....eeek!


Once our early departure was settled (had to change a number of things with the cat's export paperwork as well as it is only good for the date/flight listed....no exceptions...not even cyclones). Richard had to run up to the office for some last minute work stuff. There was road closures on the way (which is also our way out of town). The MH warehouse was up in flames (and located very near some sort of oil refinery....definitely don't want that going up in flames!!). 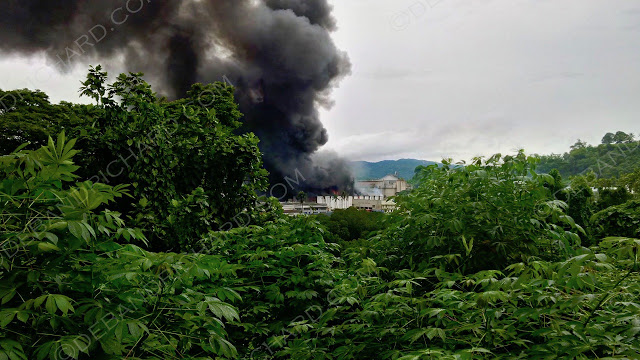 Luckily by the next morning, the fire was contained and road in front was open again. Fiji Airways doesn't allow pets on domestic flights. In order for us to take Isa Lei, we had to drive to Nadi. So we had once last drive around the island. It was obviously rainy (that cyclone), but we were stuck behind a pineapple truck for a while. So Mason snagged this shot for us! 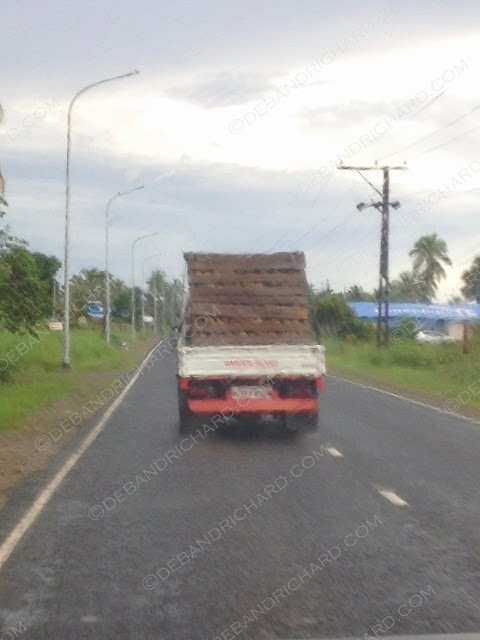 We lucked out in that we crossed the two most flood prone bridges at low tide (now don't think there wasn't water on the bridge....it was just passable due to the tide!!).  We made it to Nadi with a few minutes to spare for Isa's drop off with the pet shipper. We then said farewell to Rageen...our favorite driver who took us on many adventures. 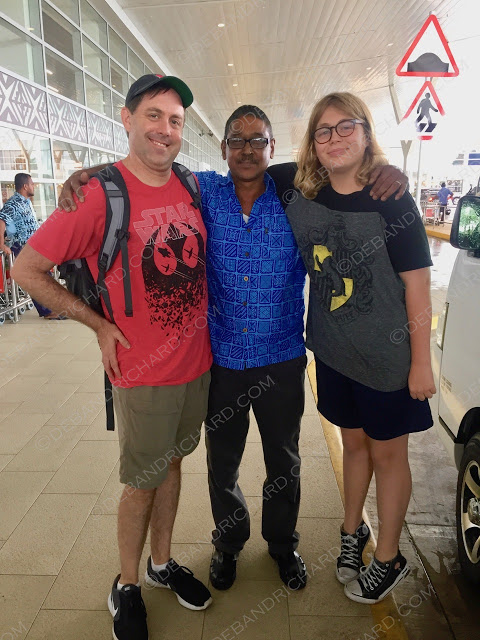 Our flight took off a little after 6:00pm....the airport had said all flights needed to be off the ground by 6:00pm as the airport was closing. As our plane was backing away from the gates you could see the lights being turned off in the airport. It was a good thing we went ahead and left early. Looking at this later track line, TC Keni became a category 3 storm right off of Nadi. The airport remained closed on our departure date and no flights came in/left.


We did find some irony in that Fiji said Bula with TC Winston and Moce with TC Keni (with a number of assorted storms in between). Our tour was bookended by tropical cyclones. The next morning, we woke up and were on our approach into the sunny Southern California! You can just barely make out the Hollywood sign in the distance. That's a lot of houses!! We spent the night in LA (poor little Isa had been in her vet sealed carrier for nearly 24 hours when we got her back to our hotel. It only seemed the right thing to do and give her a chance to stretch her legs and eat/drink). Clarissa and I got the kitty litter and food set up for Isa and picked up sandwiches for lunch, while Richard and Mason went to the shipper warehouse to pick up Isa and clear her through customs. That afternoon, we hung out at the pool to help fight jet lag. We then walked down to the infamous In & Out Burger that is in the landing pattern for LAX. 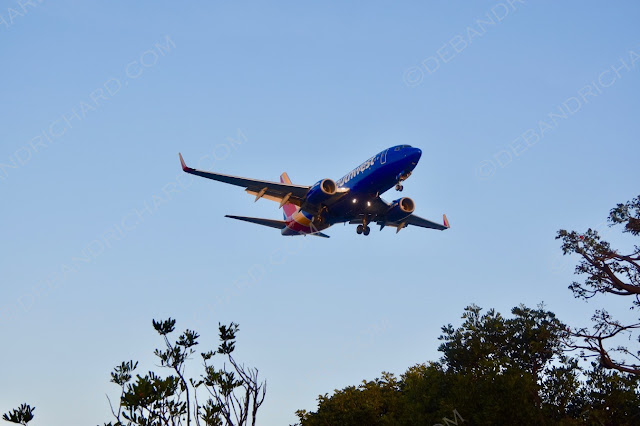 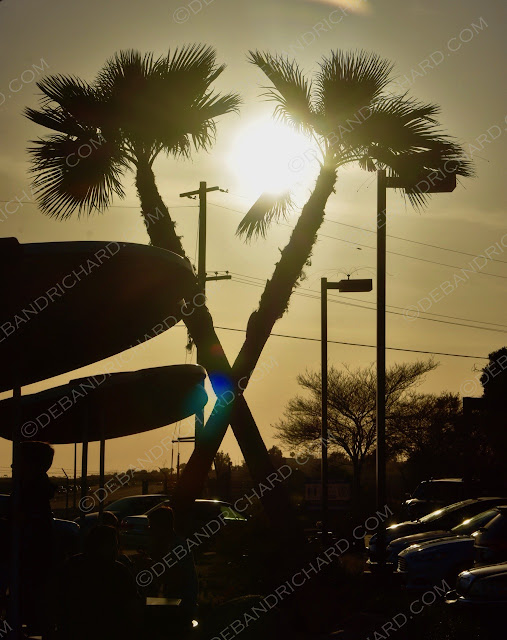 Or X marks the spot of a cutie!! 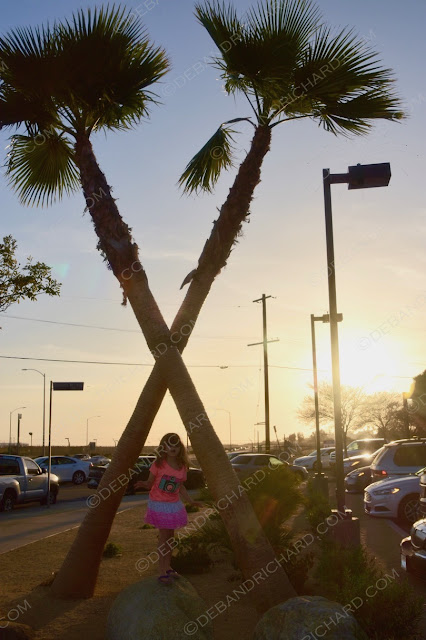 Richard and Mason went in to get milkshakes for our walk home and so Clarissa and I were silly playing in the tree with planes flying through it. 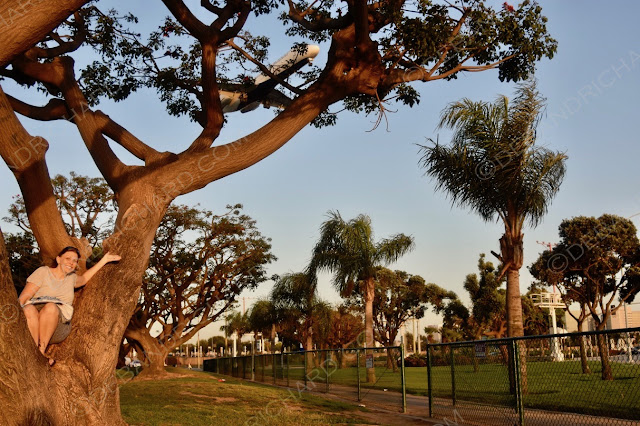 Okay, not really through the tree! 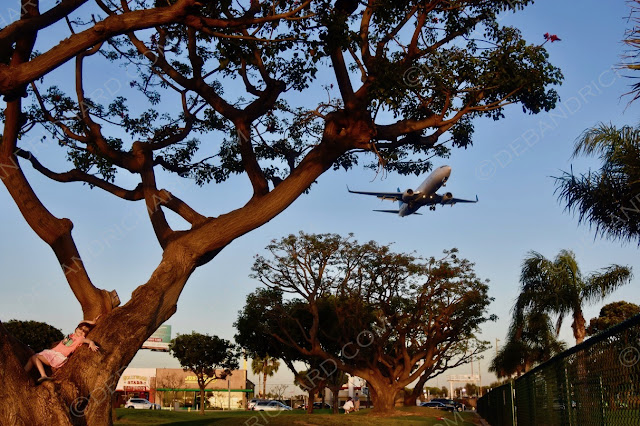 We had fun watching planes land and being all, we've been there! We had to be tourists and pose by the airport sign. 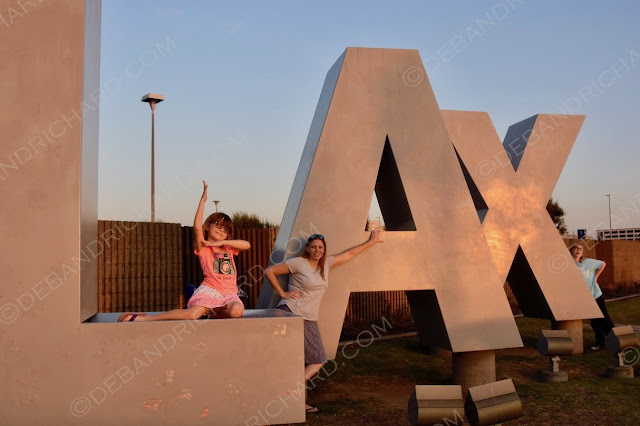 The next morning, we had to get up early to catch our flight across the US. Isa Lei was cabin carry for that flight. Something I learned about cats in carriers and TSA security. You remove the cat, walk through security, wait for the carrier to be x-rayed, then put the cat back in the carrier. You get lots of strange looks from people!! During our layover in Charlotte, NC, we found a semi-quiet spot, put Isa's harness on and let her out for a bit to stretch her legs/get cuddles. She liked watching planes!! 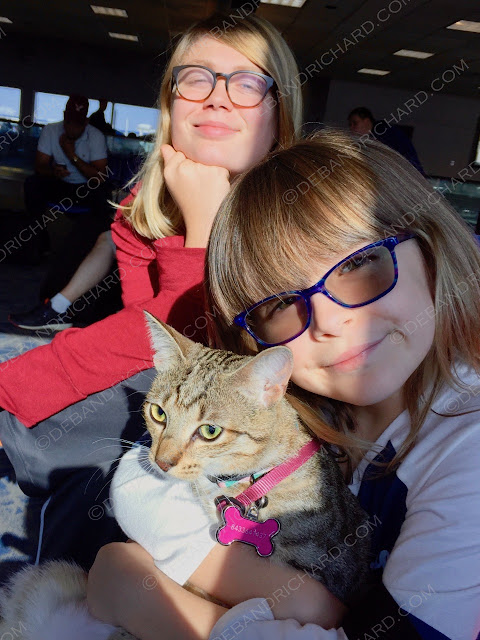 Finally after escaping a tropical cyclone, witnessing a massive fire, and two days of travel, we made it to our home leave location.....and OMG, it was cold!!!!!!
Posted by Deb at 12:00 PM

Email ThisBlogThis!Share to TwitterShare to FacebookShare to Pinterest
Labels: Fiji, wheels up