So one benefit of the job I had in Suva, was looking for tips of places to go and things to do for the Embassy community. As luck would have it, South Sea Cruises was offering some specials for the month of March and they sent a representative to meet with the travel guy and me. One special was to their new private beach club (Malamala Beach Club) and the other was to South Sea Island. Between the yard sale and the Easter party, we had an empty weekend that would be much better spent sitting on a beach than preparing for packout.....So we headed up to Nadi after school/work on Friday. Stayed at a low cost hotel (as the point of our trip was a going to South Sea Island....no point on wasting money on a fancy resort we were just going to sleep at). Saturday morning, we caught the 9:00 boat out of Port Denarau. Sadly, it was a bit windy/rainy on the ride over (as you can see by Clarissa's hair and bright pink swimsuit). 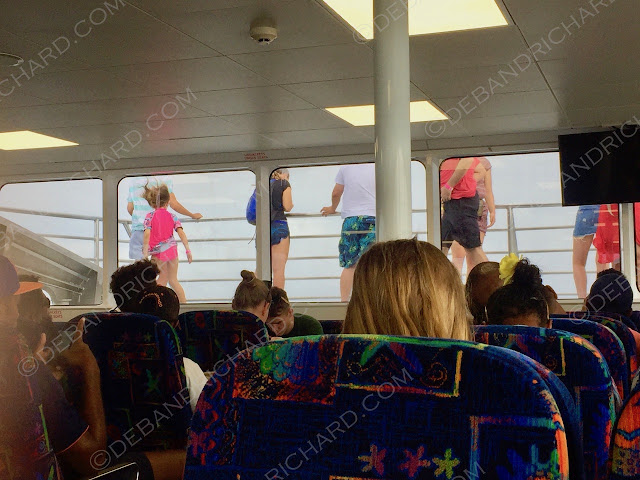 Once we got there, we nabbed a table near the pool that was undercover....in case it rained some more (which it did). The kids immediately jumped in the pool (even before our welcome to the island talk by the staff). South Sea Island is part of the Mamanuca Islands and is one of the closer islands to Port Denarau (we were only on the boat for about 25-30 minutes before we were dropped off). The island is tiny and no villages inhabit it, but you could rent a room for the night if you so desired (this was more of a backpackers type resort). 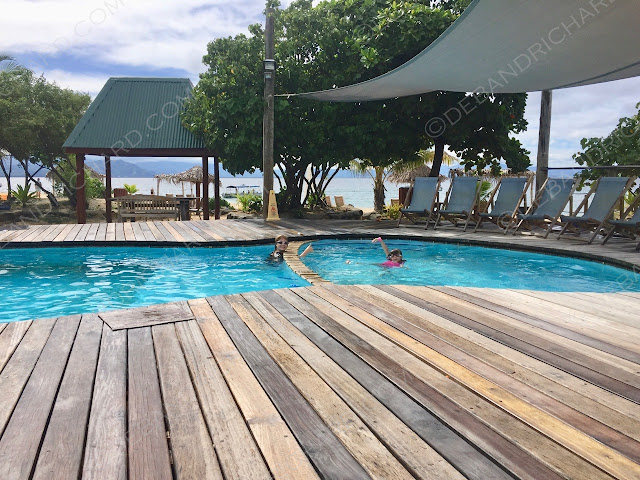 The little divider between the shallow and deep ends of the pool had holes in it....as you can see by what appears to be Mason's detachable arm...lol. I guess it was to help with water circulation - the holes were pretty big as you can see by this peek-a-boo shot. 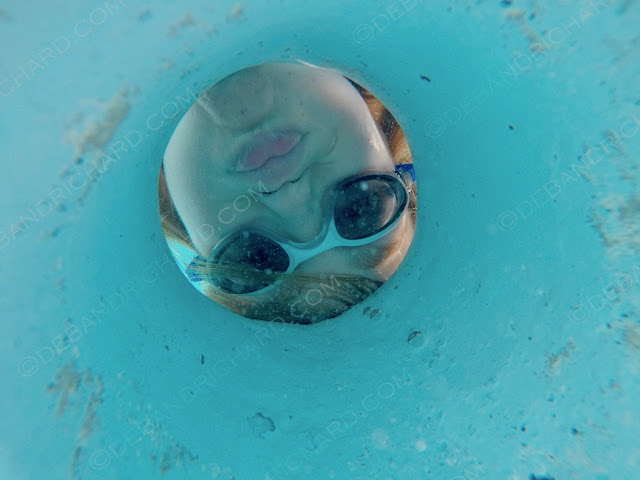 So we heard they offered guided snorkels as part of the day trip package, so I went to inquire about that....next thing I knew Richard and I were both going diving (yeah Mason being old enough to babysit his sister!) and they were able to look-up my PADI certification (Richard had his C-card on him). 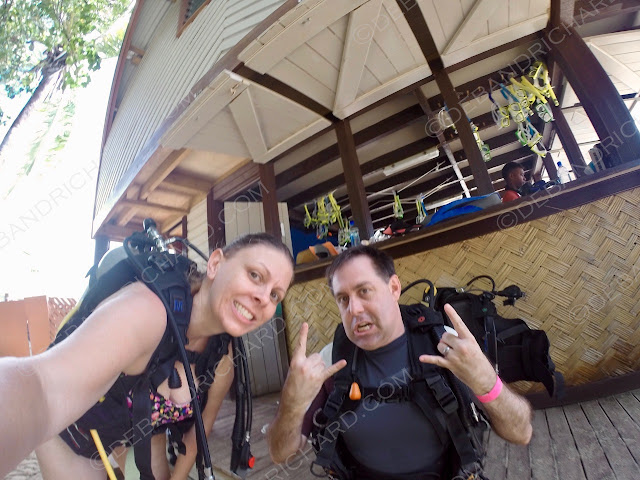 It rained off and on all day long. Which was a bit of a bummer, but we still had fun napping in hammocks (Richard), walking around the island (Clarissa and me), and swimming in the pool as there wasn't any lightning.....wet is wet! During Clarissa's and my walk-about of the island, we decided to play with the GoPro and crashing waves on the windward side....because we could! It was great fun and we laughed very hard! 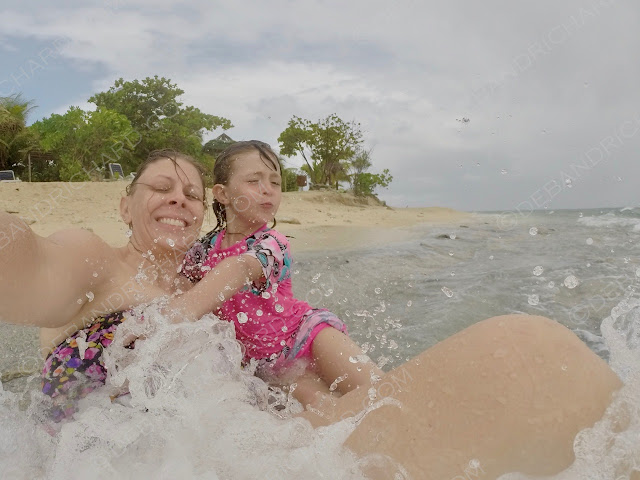 Richard did get a chance to fly the drone around between raindrops and when the windy wasn't too gusty. 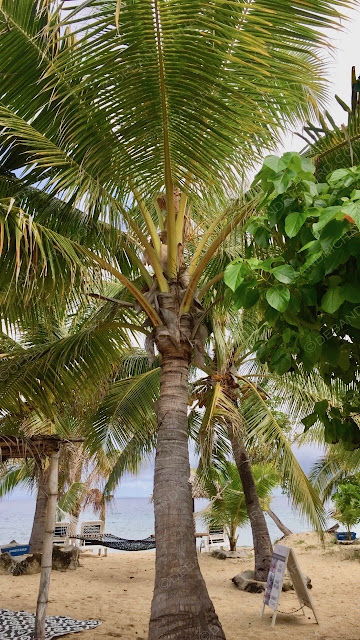 The above was Richard's view from the hammock. Below...love Clarissa's facial expression....as if to say what is up with this nasty weather!

We also played an exciting game of hangman on the beach..... 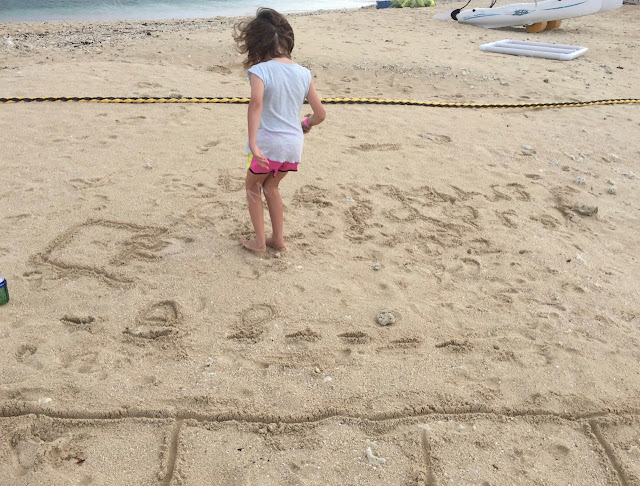 Our goal that day was to visit another island, so our goal was technically met....just too bad it wasn't pretty sunny weather (but February/March on the Nadi side of the Viti Levu is the "rainy season"...hence the awesome deal we got. When we got back to Port Denarau that evening, we opted to eat dinner there before heading back to our hotel. Right outside where we ate, there just happened to be a fire dancing show as luck would have it. We've seen several before, but the choreography is always different (and you are always happy when no one gets hurt)! 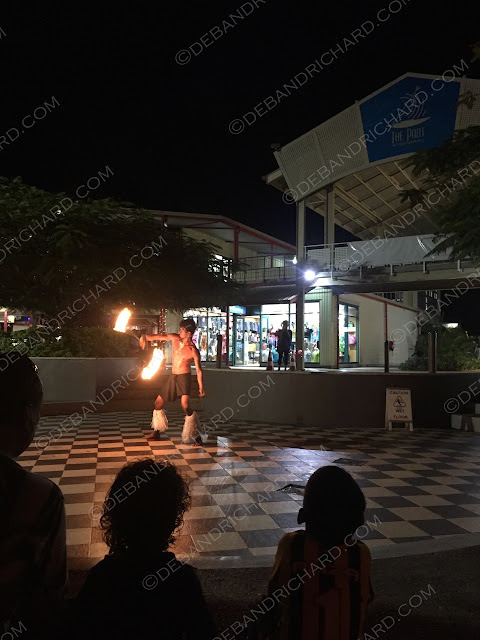 I was letting Clarissa record some (she had less heads blocking her view). She decided to get creative and shoot in time lapse mode. Of course, this is the super neat part where the guys are breathing 2+meter (6 foot) bursts of fire! So I slowed the video down a bit there....so I apologize for the odd jerkiness of the video....but it's still super cool!

Our plan for the next day was to go visit the Garden of the Sleeping Giant. It is property formerly owned by Raymond Burr (aka Perry Mason on TV) and is filled with gardens of orchids. So after we checked out of the hotel we headed that way. Everything was going fine until we came to a bridge crossing. We had to go down a steep muddy hill (it had been raining a lot in Nadi the past few days), then cross one of those guardrail-less low-lying 'bridges'....but given how much it had rained the water was at or nearly at the top of the bridge.....sadly we opted to not cross in the Prius.....hindsight we should of used a tour service and their 4-wheel drive trucks. So we headed on back to Suva, but we made a stop at the Kula Wild Adventure Park on our way. The kids and I had been when we first arrived to Fiji, Mason had come again with a field trip, but Richard still had not visited. We walked through and got the chance to hold the endangered Fijian banded iguana. 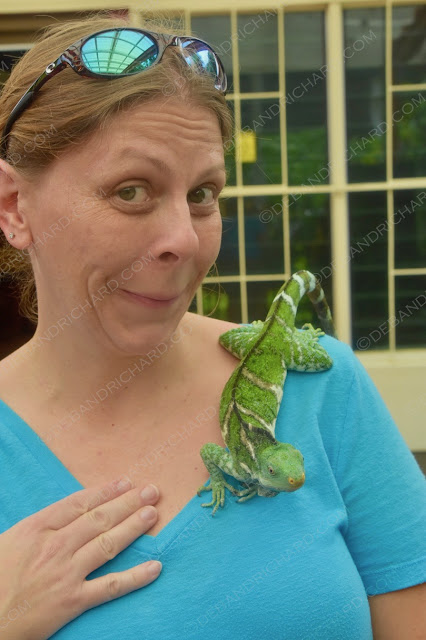 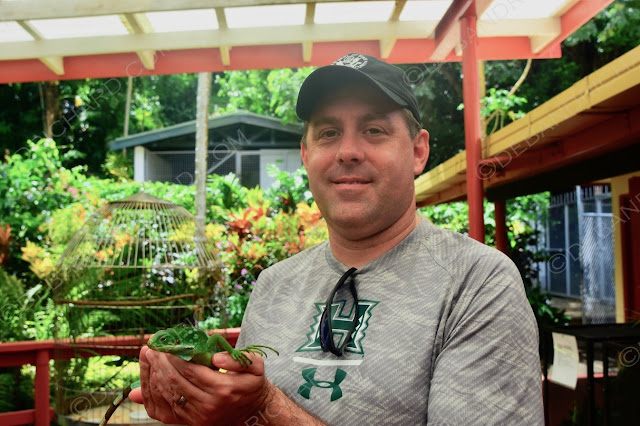 Still think this is the Fijian Burrowing Snake, Ogmodon vitianus, or bolo as the locals call it. 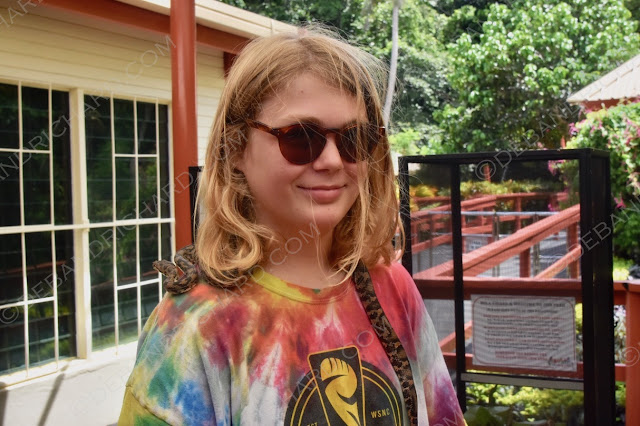 Clarissa was scared to hold a snake, until I held it. Then she not only held it, she wore it! 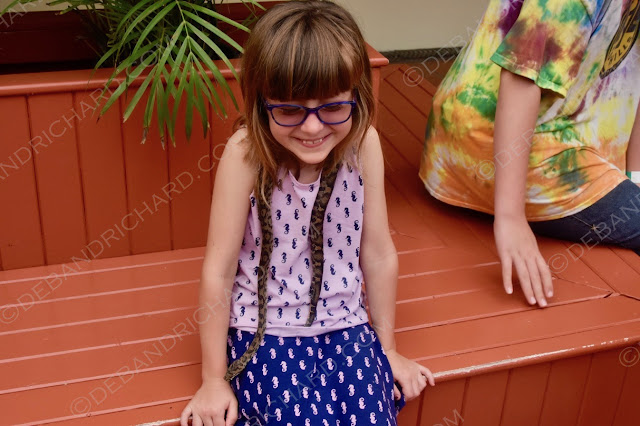 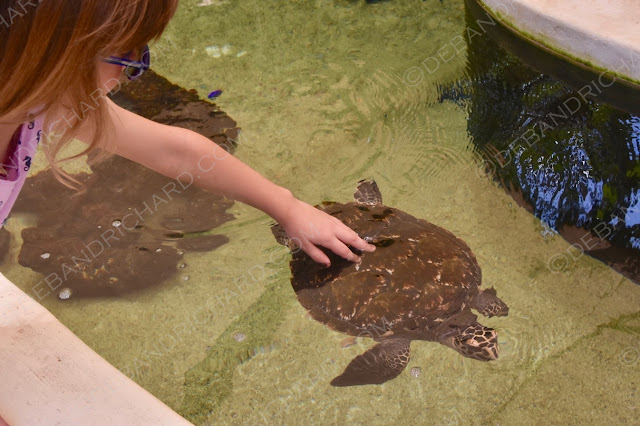 Mason and Richard opted to do the zipline through the jungle, they have since added a splash park for little kids which is free! So Clarissa and I went to get her swimsuit on. On the way back we went through the aviary. This bird was not intimidated by humans at all! 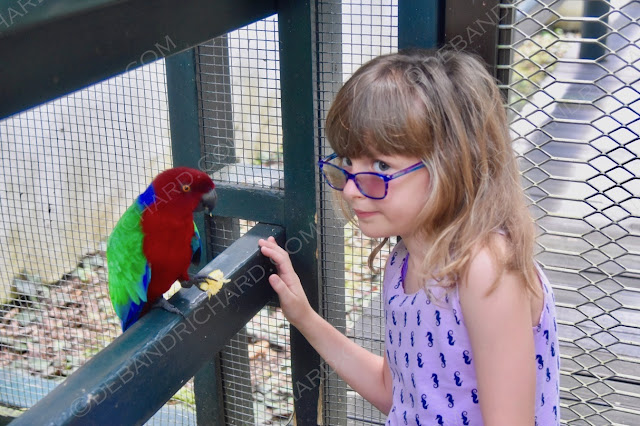 Clarissa reached out to touch it. I was all noooooo! Hence her look of apprehension. I think this was the Maroon Shining parrot (Prosopeia tabuensis) - native to outer Fijian Islands. Here's a close up of just the parrot. 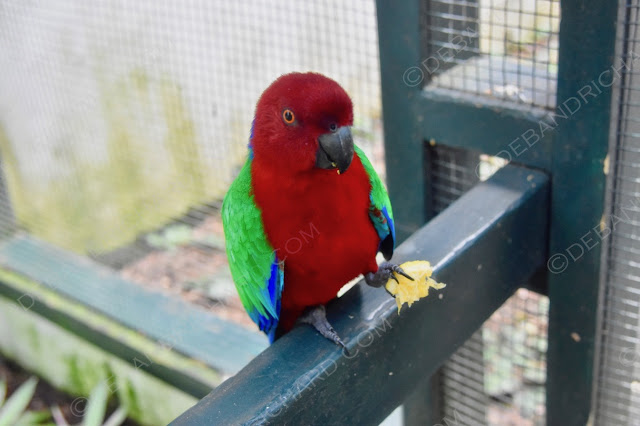 I also got an awesome close up of a collared lory (Phigys solitarius). Fun fact, it is endemic to Fiji, a rainforest bird, but it has also adapted to urban living and can be spotted in Suva! 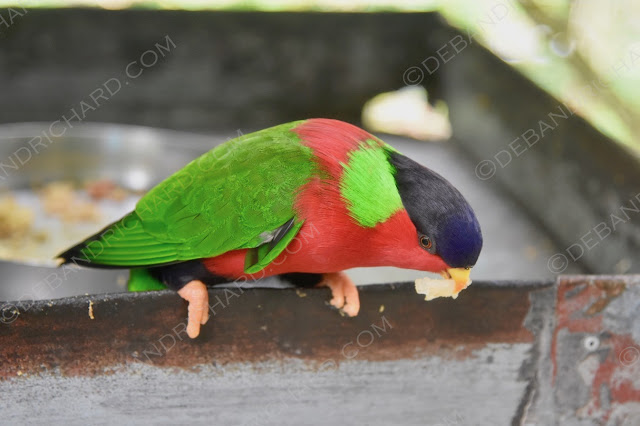 Here is the zipline video. Richard was able to attach the GoPro to his helmet.

Clarissa about to have a bucket of water dumped on her (she's in purple). 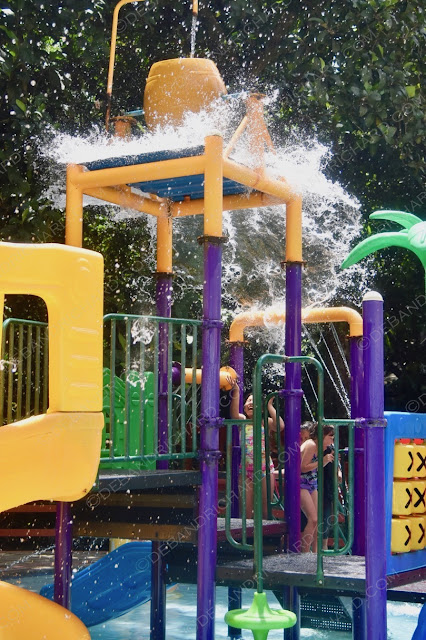 We eventually made it back to Suva....of course hitting more rain on our drive. Oh Fiji!
Posted by Deb at 11:00 AM