Summer & Fall Sewing/Crafting and the start of school....

So school started and it's been crazy. First, the start of school was delayed a week and half (from August 23 to September 1). When it first started the kids were 100% virtual school for the first three weeks or so. A number of teachers and students hadn't made it into the country/cleared quarantine yet so there was no way to actually start in person school yet. Qatar's Ministry of Health and Ministry of Education are mandating for the most part what is and is not allowed. They were allowing up to a certain percent capacity at the start but the kids school didn't have the teachers in, so they were forced to due virtual at the start. Three weeks in, we started the hybrid schedule - meaning 1/2 the kids go to school on 'A' day and half go on 'B' day. They divided the school alphabetically so that families are on the same day, with no promises for high school as they have very different schedules. We lucked out and both kids are on the same day and I don't go crazy. Unfortunately, due to road construction at the gate buses use supposedly making it unusable and the need to contract a new bus company, there has been no bus service available for these first two months of hybrid school. Making for fun days of drop off and pick up (in construction zones) at two different gates due to separation of the grade levels (drop off takes about an hour, pick up takes an hour and a half...so I lose five to seven hours a week in the car depending on how many days they are on campus). That doesn't count the nail in the tire I got and had to get repaired nor the the car that hit my passenger mirror as they flung their door open into traffic. Thanks 2020! Things are turning around a bit, the universe's gift to me for my birthday is bus service is resuming next week!! I accept and am gladly sharing with all the parents. Clarissa was a little hesitant to ride the bus, but after the car getting hit last week she is ready for it. 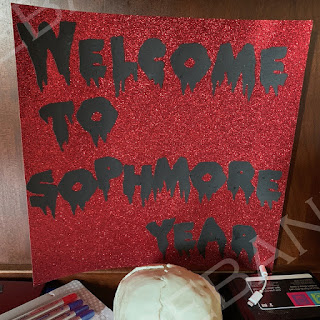 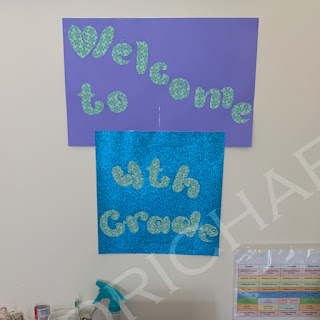 Anywho....back to fun...between chilling raging in the car, working, girl scouts (starting up but all virtual this term...following the school's after school activity guidelines), I've had a bit of time from the summer and less since school started to do some sewing and crafting while staying at home...so here's what I've been doing...

I made Clarissa a new swimbag. The zipper had busted on her old and she wanted something that would be easy to carry outside her backpack. So it has real long straps. Most days she'll save time and wear her swimsuit under her clothes so I made this little attached matching pouch to put her clean unmentionables in. So when she pulls her towel out her undies don't go flying across the locker room....lol. The main part of the bag is some waterproof fabric and it has two snaps to keep it shut. Plus who doesn't love purple and Bula fabric?!? 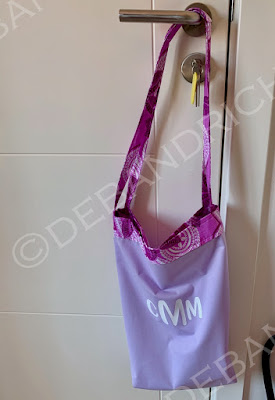 When I was ordering the waterproof fabric I also got some food-safe fabric. We had bought an ice maker off someone leaving last year, but it can be really moody. If a drop of water is on the laser line, it just stops making ice and everything melts. But when we would make ice, we would make it batches and fill up big plastic bags of ice. We would reuse the bags 2 or 3 times before they would start to get holes, cue the tree hugger guilt. So I sewed up some reusable bags (oddly enough no patterns out there for that). So I just took the measurements I could find online for the size of your standard ice bag added a bit at the top for some velcro and viola! Done. I didn't want to add too much since it was the waterproof fabric and every needle hole would make it less waterproof. I used my serger on the sides, then covered those seams with bias tape, and then sewed the velcro at the top. I did nerd out and put some cute 'icy' iron-on's....because I could. For ease, Richard has been filling them up at an ice maker up at the Embassy. Easy peasy! 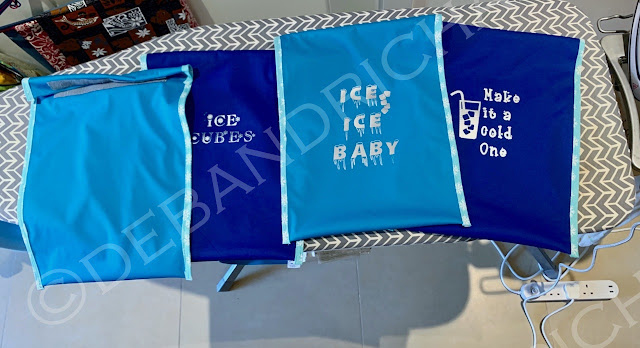 Apparently, Richard and I have dainty heads....lol. We both like extra pillows at night. Most sheet sets come with two pillowcases, so I used some more Bula fabric to make a second set of pillowcases to match our blue sheets. 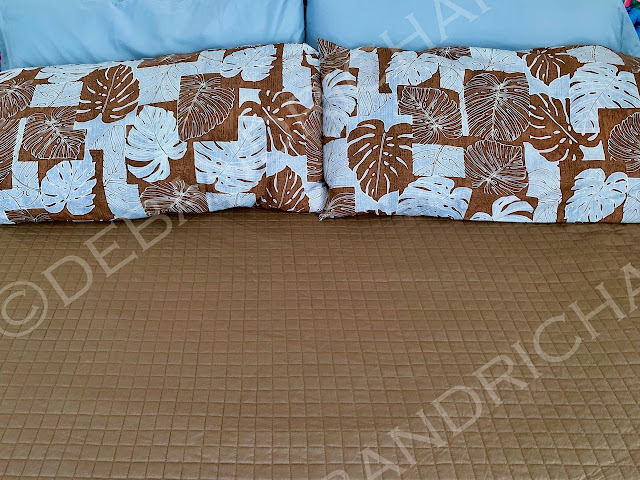 Clarissa used some birthday money and some clean out her room/sell on the neighborhood facebook page money to buy herself a Nintendo Switch and the game Animal Crossing: New Horizons. At some point, she figured out how to add me as a resident on her island....at the height of the peak pandemic here in Qatar when only grocery stores and pharmacies were open. We had a lot of time and no where to go....so it was fun to play and take trips to mystery islands....Richard and the teen made fun of me (I feel the judging in this photo taken of Clarissa and I playing)....anywho the whole family now plays and we had to buy another switch as it got to the point where Clarissa wasn't getting screen time on her own game....but I made a fun tshirt for the game's airline (I also made one for another FS friend who plays). 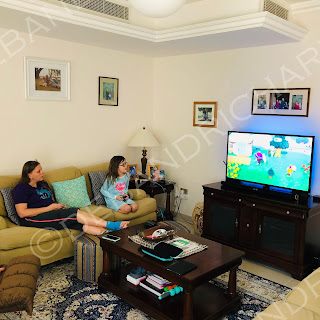 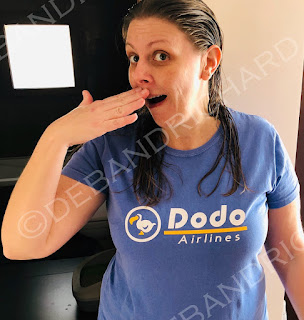 I have lots of scrap fabric leftover from assorted projects and saw this DIY somewhere. So I made some fun hairpins...I've given most away (and I also made some barrette versions which I sent to my niece...but of course I forgot to take photos of those). 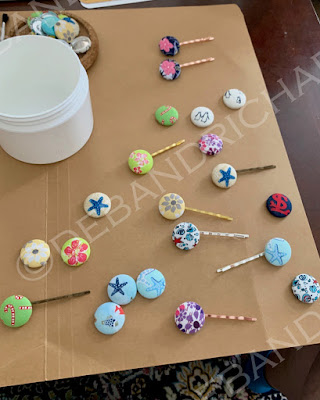 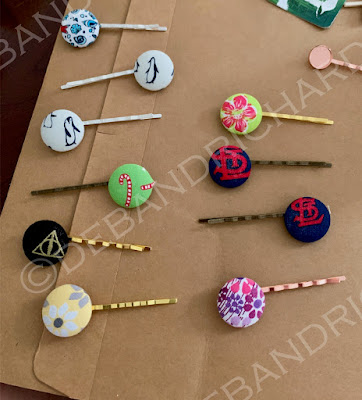 USAGSO (Girl Scouts Overseas) put on a worldwide virtual camp-in. They opted to not produce patches, but did upload a digital file of the logo. So I made Clarissa a tank top to wear of the logo (you may seen her wearing it in my instagram photos over to the side). 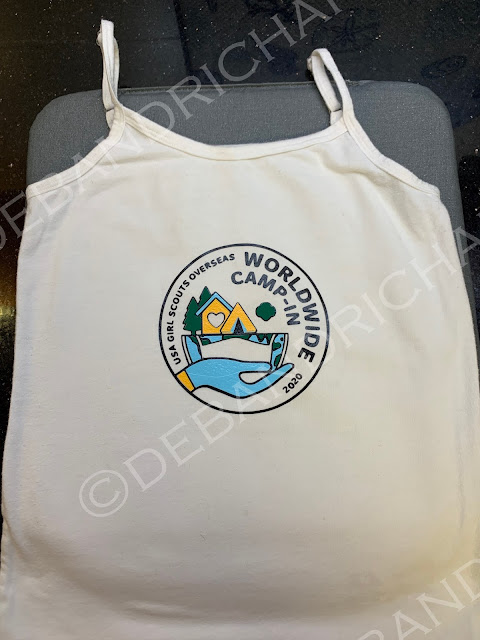 After getting one for Father's Day, Richard really like the insulated wine tumblers (good at keeping gin and tonics cold in 120 degree temps). So I order some more and made them pretty also. To make the symbols big enough to see, Richard's is two sided - it is Star Wars/Mandalorian related - I think..... 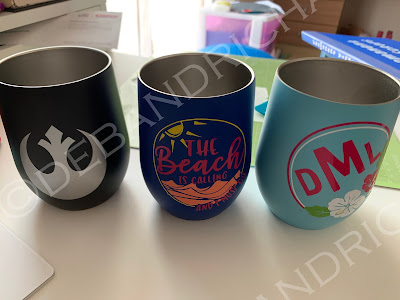 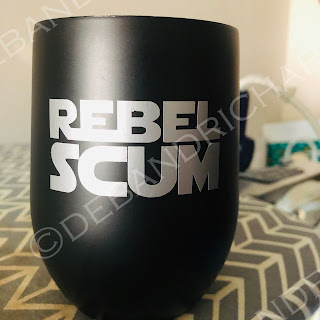 So as we moved closer to the reopening of school. I began to prep for that. I made more masks for each kid. Elementary schools requires kids change masks at lunch time and they would a spare mask in their backpack. I also repurposed a trash bin as a 'dirty mask' hamper. I line it with a delicates bag so when I have a load of wash going in I just zip it shut and throw all the dirty masks in and I don't have to touch them. It sits right between the door into the house and the bathroom....pretty ingenious system if I don't say so myself. 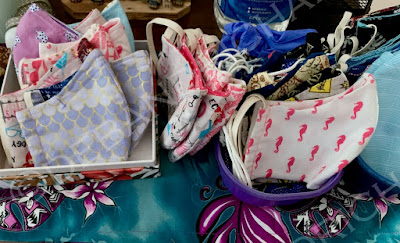 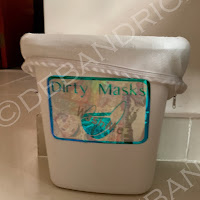 As I showed at the start of the post. Since the school year started all virtual, I made each kid a welcome to # grade sign. Just to set the study area tone. Since we hadn't left the house much and we weren't leaving for school just to make a mental switch to school mode. Neither said anything...so don't know if it helped or not. Also, since the teen is in chemistry this year, to help with periodic table knowledge, I made a new body pillowcase. I did get a 'cool' with this one! 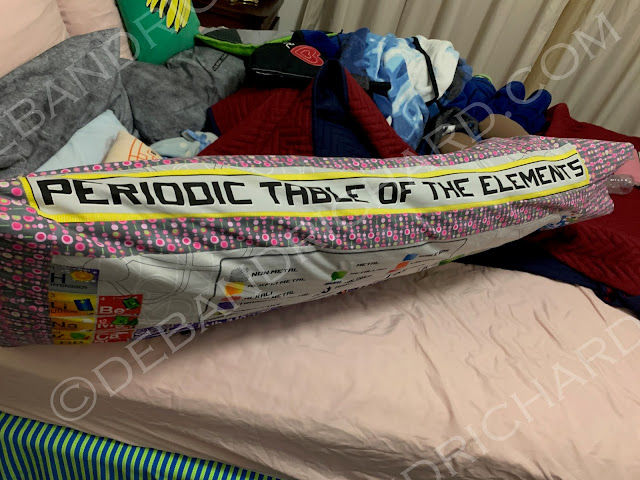 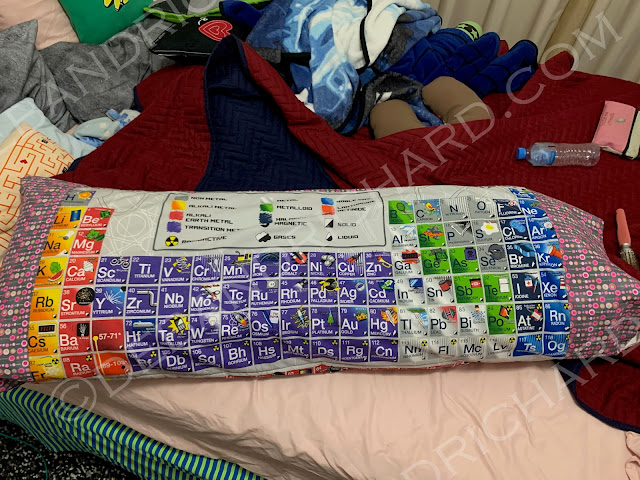 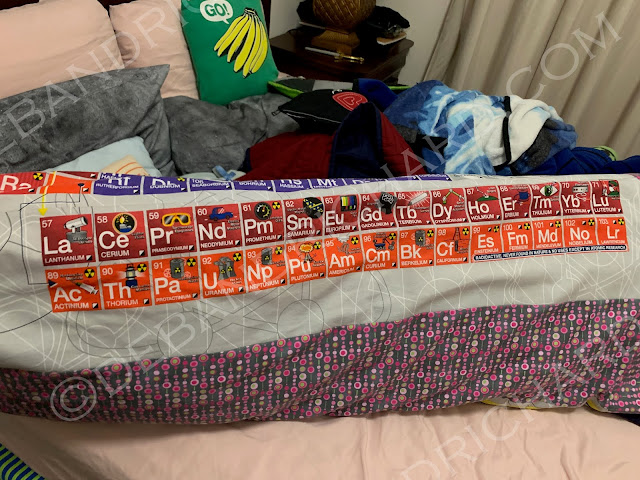 The twins across the street (younger brothers to Clarissa's bestie) had a birthday go by. So we made them a present. She said they liked Guardians of the Galaxy...and who doesn't like baby/teen Groot. So we downloaded a Groot file set. Then she picked the Groot that best fit each twin's personality...she said they like them. 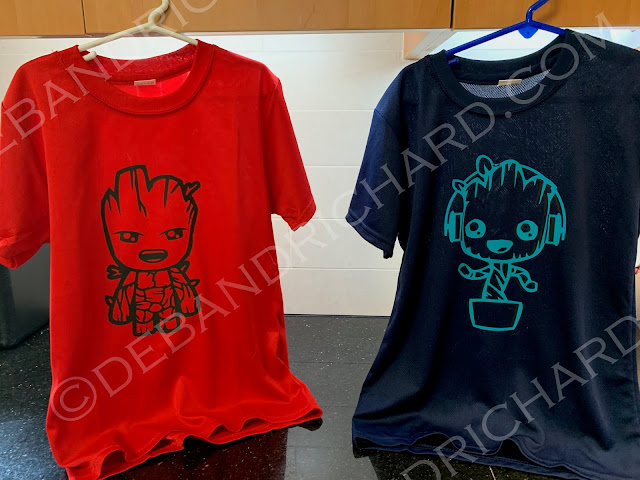 Our troop had some left over fabric last year and so as the inventory person on the committee again, I knocked out some troop funds money pouches (that is apparently the official name for them). I still have some fabric leftover, so I may try to make our troop some masks for when we can start in person meetings. 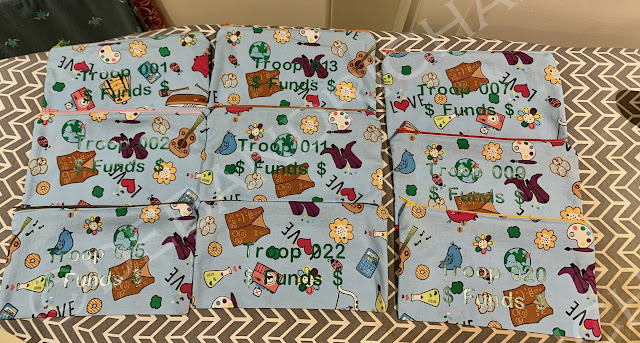 As Halloween started to approach. I went to my fabric scraps and was able to make a few spooky masks for the kids. I tried a different pattern that was touted for glasses wearers to not fog them up. Clarissa does not like them, the teen loves them, Richard prefers my other style. So if I make some holiday masks (because why not!) I now know what patterns is preferred by who. 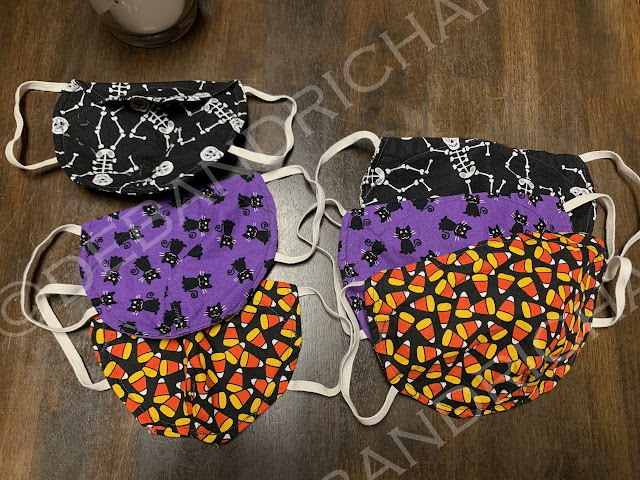 As I showed here, we also made some Halloween specific decorations. After Halloween, I kept the pumpkins out and made them look more fall like with some leaves I had in our Thanksgiving decoration bin (which is quite sparse as it's mostly things the kids have made). 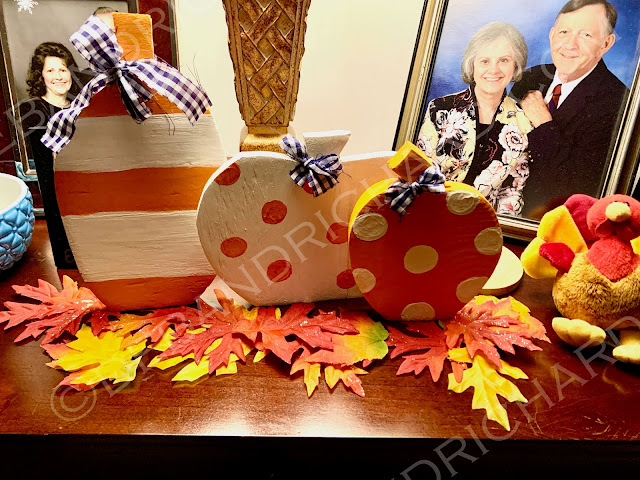 Clarissa found a Step by Step painting website and has done a number of paintings (I'll make that its own post) and I'm working on a holiday present for all the kids teachers at the moment (because teachers really deserve a little extra thanks this year!!). But that's one of the ways I've been keeping myself entertained  during this pandemic....doing crafty things makes my heart happy and if I can share some it with others than even better.

Email ThisBlogThis!Share to TwitterShare to FacebookShare to Pinterest
Labels: #20in20, crafts, sewing