So as I did with Georgia and Fiji postings, I've joined one of the local expat woman's associations (Here is it American Woman's Association (AWA) Qatar). They do the usual monthly meetings, LOT of awesome excursions and activities, and some charity work. A week ago, I was helping make fleece blankets for military personal being med-evaced to stay warm with on cold cargo planes. The day before that, I went on the kayaking trip!! We met up and the tour group coordinated our transportation via bus up to the Al Khor area. It was about an hour drive (we live in Doha and we kayaked at the blue dot).

When we were driving the last bit (our bus drive meet the kayaking crew and followed them). A lot of us where starting to wonder where the water was. We finally turned at an orange construction cone on the side of the road and were off roading through a sandy/hill landscape with some car tracks going through it (this is the view back once we made it to the water - the power lines are the road we turned off of). 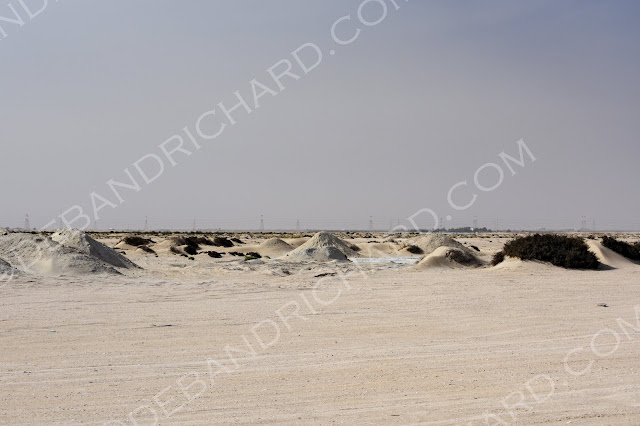 We then turned at a second orange cone which took us directly to the water! At last we had arrived! 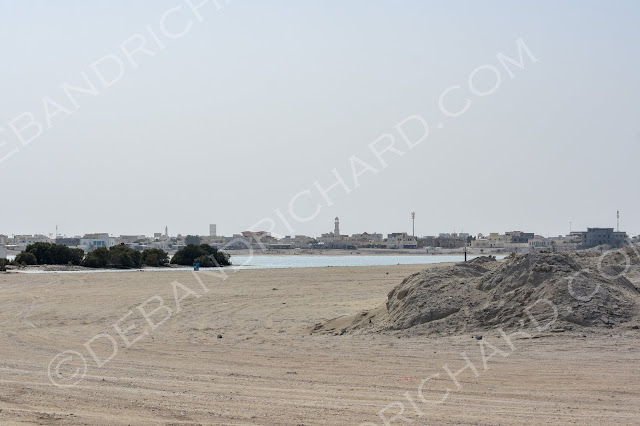 We all got fitted with our life jackets and paddles. The kayaking crew did a demo on how to hold the paddle and how to get the best results for moving/turning/stopping. We then headed down to the row of kayaks waiting for us. 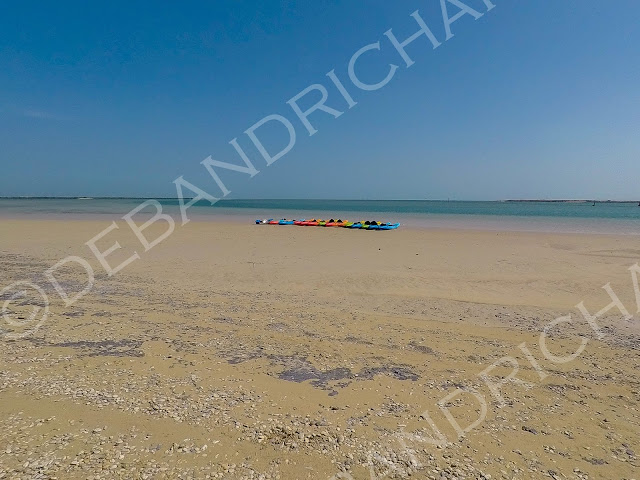 We got directions on where to paddle across the channel to a mangrove island in the estuary. The tour guide folks got this shot of our mass dash across the water. I'm the goober wearing a buff (I hate dealing with the knots in my hair) and the Go-Pro on my head. 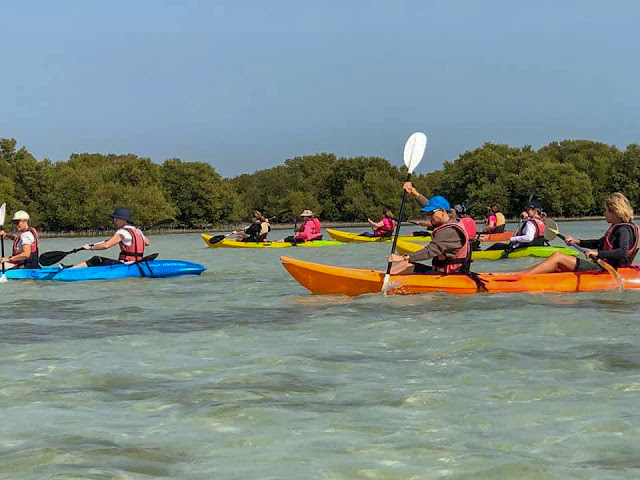 We had a little time once we reached the island to walk around. We did the group picture of course. 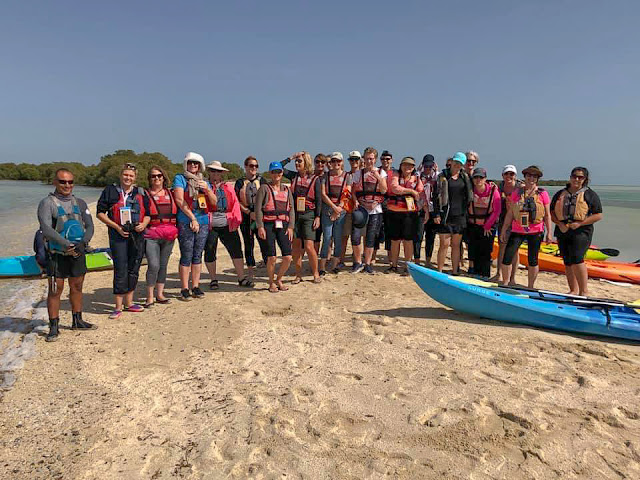 Our guide confirmed what my kayak buddy and I thought were flamingos. Sadly, this would be as close as we were getting to them (good the flamingos, sad for us). I had brought my 300mm lens and have since cropped in further with editing software. Here are my best two (focus is off as it was far away the camera didn't know what I was taking); one shows some with the pink coloration (they were very pale/almost white) and the other shows one with the distinct neck/profile. 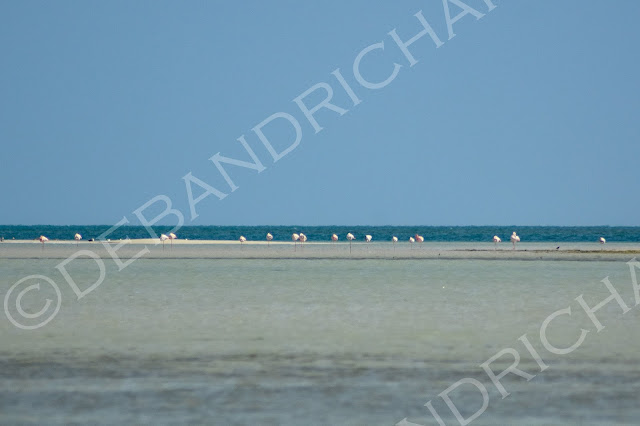 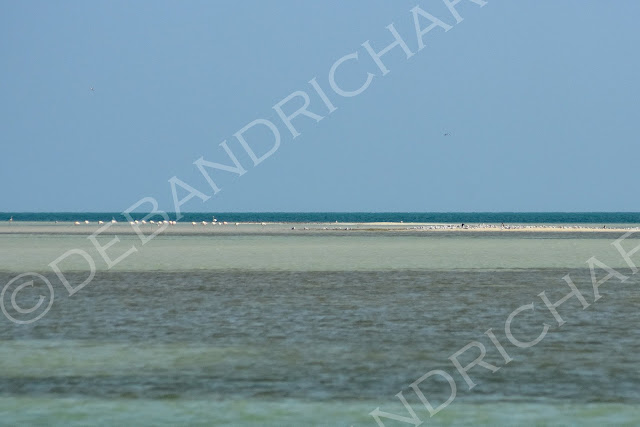 Real live flamingos in the wild!!! Of course, the mangroves were the real destination. 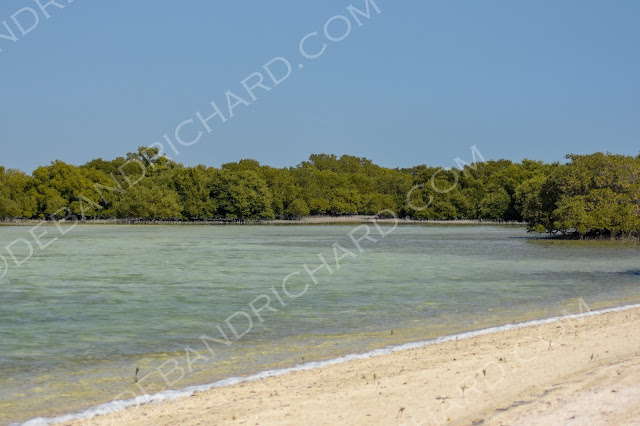 Reminds of Florida mangroves.....but yet I'm here in the desert! 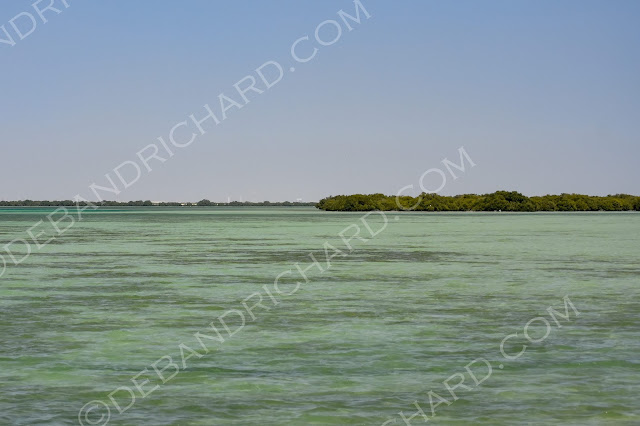 There was a Great Egret (Andre alba) that was much closer to photograph. After resting in the mangroves a bit, 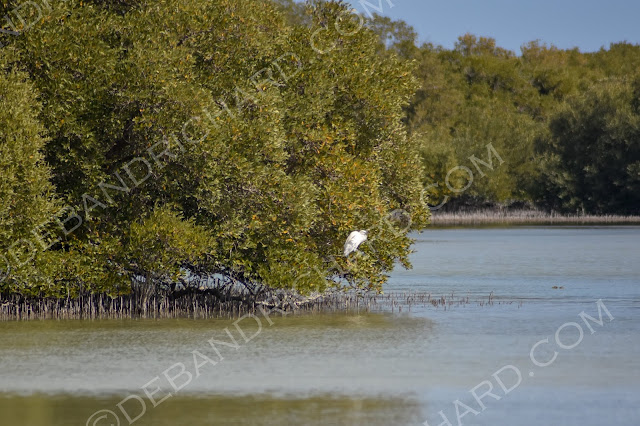 it took flight and I captured the graceful bird. I can't decide which I like better - with the mangrove background or plain sky background. 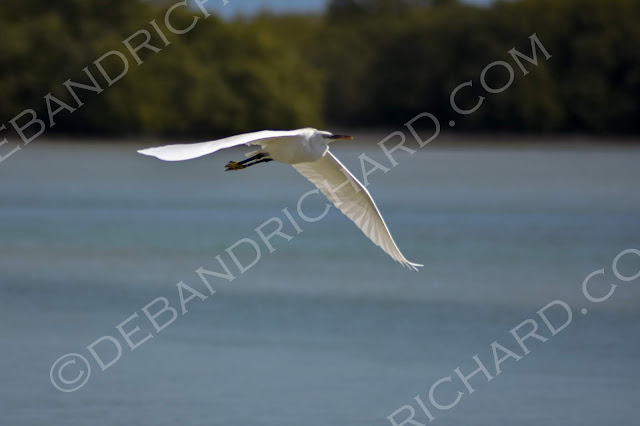 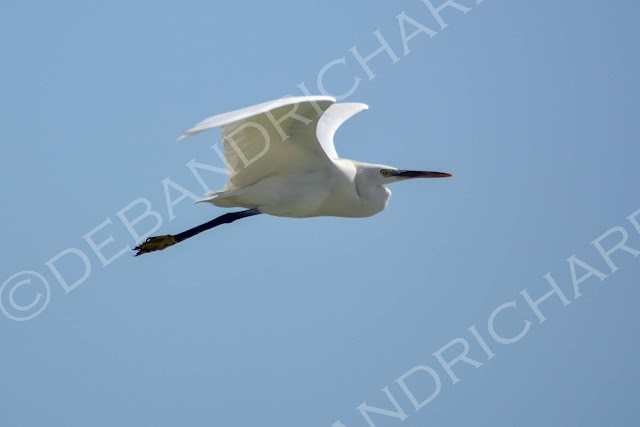 We also happened upon a mangrove with perfectly spaced/symmetrical radial aerial roots (pneumatophores). The guide spoke about the use of these roots (aeration during high tide when a portion of the plant is submerged). 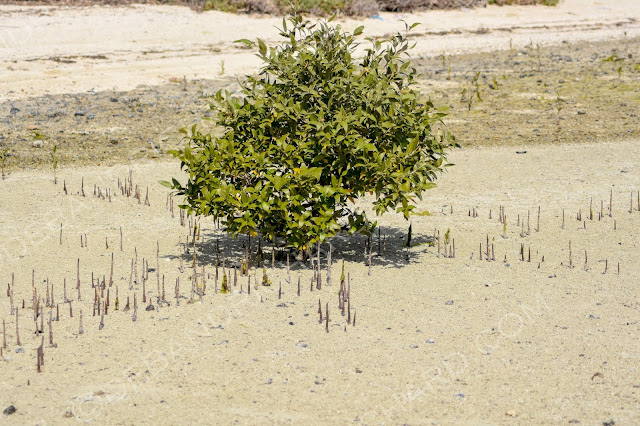 We got back in the kayaks and paddled around through the mangroves (with one spot so shallow we had run aground and had to get out and pull the kayak). 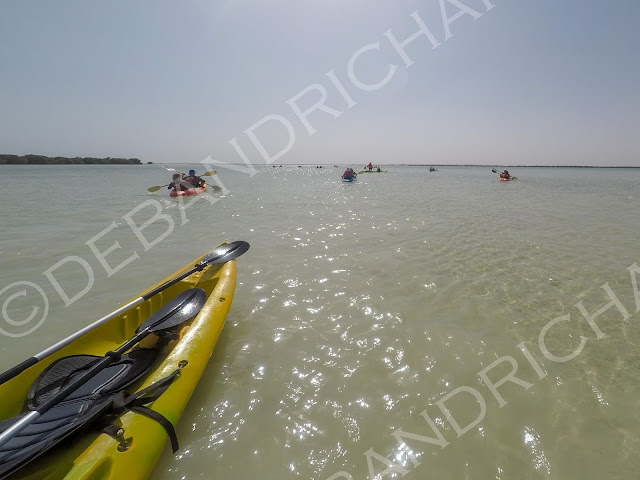 When we were nearly back in open water there was some mangroves with a flock of Western Reef Herons (Egretta gularis) as well as more Great Egrets. 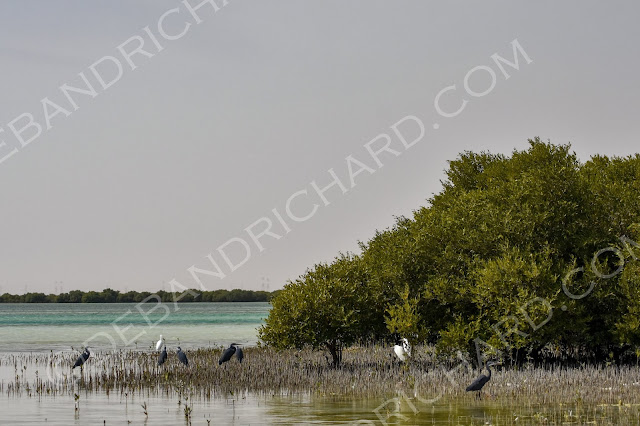 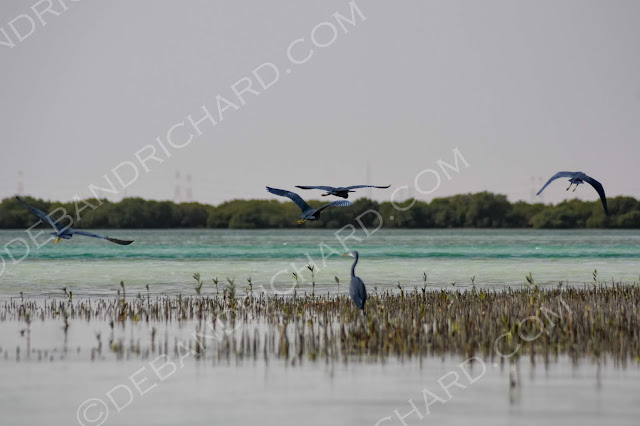 I had finally figured out the GoPro settings (I was trying to take a photo every 30 seconds, would set it up, but then when the camera went off it returned to the default single photo). Not a whole lot to look at while heading back across the channel - though I did get a nice series of paddling photos. 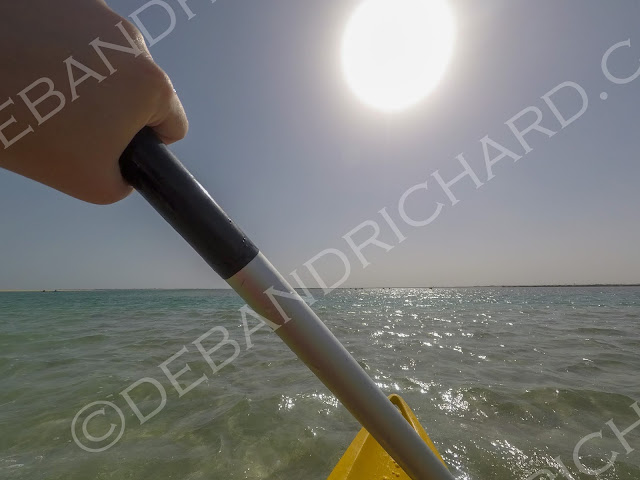 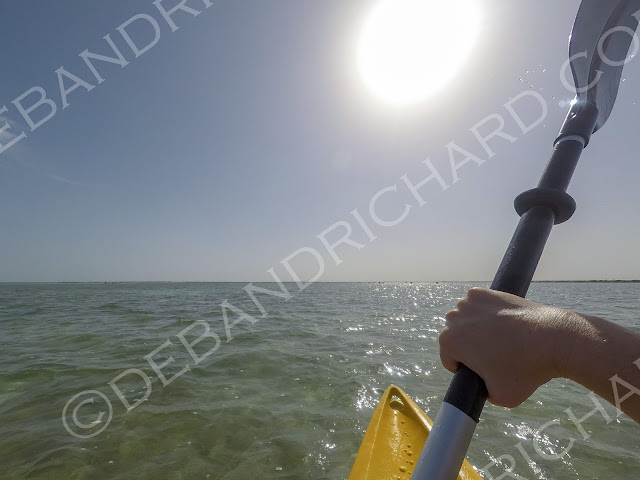 Sadly, we were not at the head of the pack here....lol. Quite the opposite. We had paddled great all morning but suddenly there was a current that kept turning us to the right (these were probably one of our 360 turns as we'd just get tired of battling the current). We finally reached a shallow enough area and just pulled the kayak back the rest of the way. One of the kayak crew guys met us and took it the last little bit (my camera was still shooting away!). 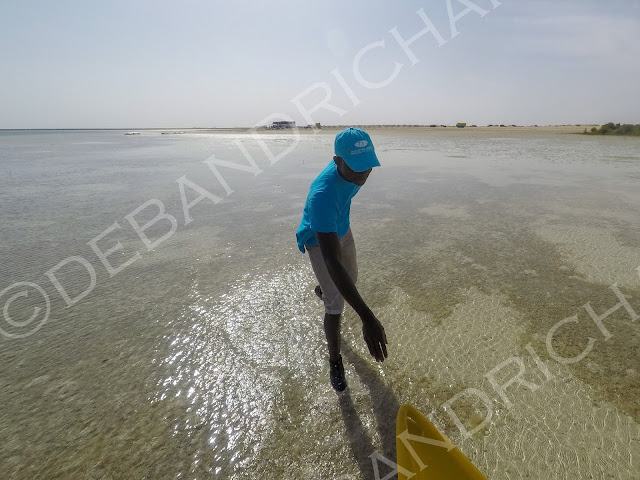 We then walk back to the makeshift camp they had set up. You see our huge bus we came from Doha in and of course the port-a-potty (literally portable)! 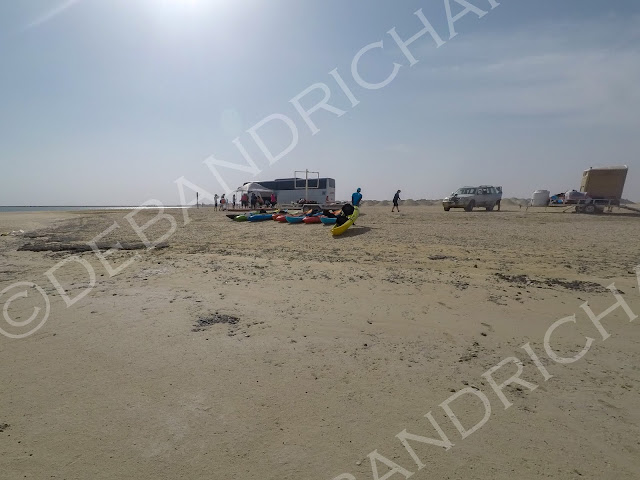 There was a tent set up with Arabic coffee and cakes to snack one. A lot of us had brought our lunches so we ate them then (by now it was after 13:00). 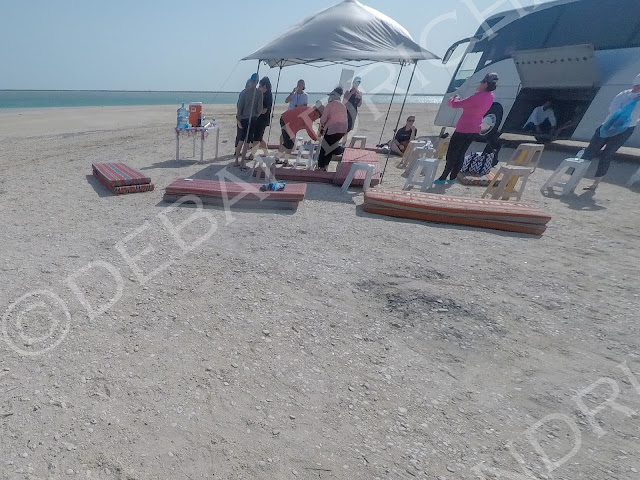 After eating my PB&J, I got artsy with the beautiful Arabic coffee pot! 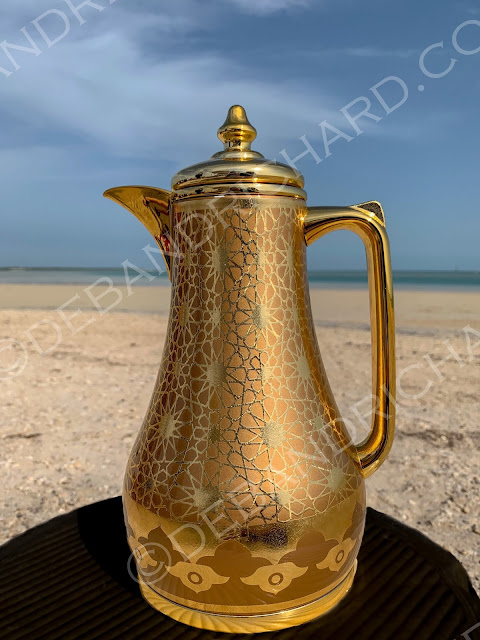 It was a super fun day (but in my doing reconnaissance on the trip...I think the current might make it bit too tricky to take Clarissa out there. She doesn't paddle much and that would be a lot of work for Richard......lol). Though I would like to come again, possibly earlier in the flamingo migration season when hopefully more birds would be present, with Richard.....it would be a fun date day!
Posted by Deb at 8:00 PM