So mid-March we decided to take one last beach weekend before R&R (much to our dermatologists dismay we can't go stateside after 15 months in Fiji looking pale and sunless). We opted to go to a tried and true fave the Intercontinental Hotel on Natadola Beach (and I used points for our stay since I have a feeling our easy access to Target/gluttonous eating out/etc on R&R might run up the credit cards a tad).

We drove up Friday after school and arrived just after sunset. I played with the GoPro on the drive up (I have this blog post in my head and I'm trying to get some photos to enrich it.....unfortunately the angle of the sun did not help....I got pictures of what I wanted but the lighting didn't work....sigh!). Did get some nice scenery shots like this one. 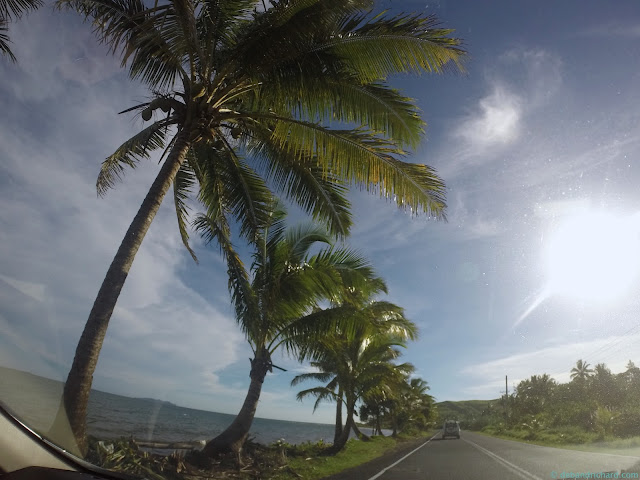 As well as, a nice shot of a road side vegetable stand. 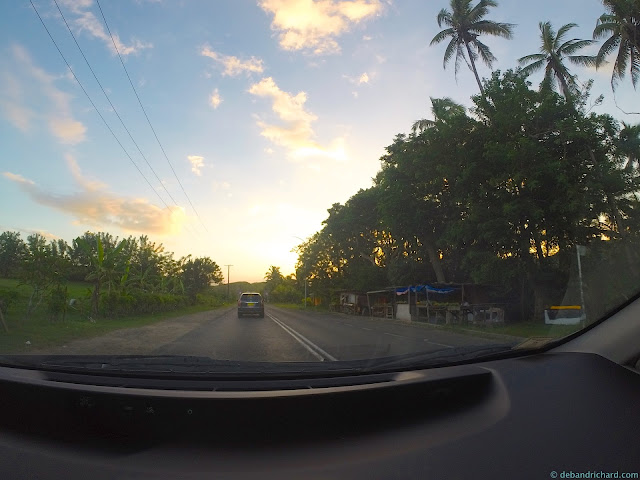 Even though they snacked on the drive some little people insisted on getting dinner right after we arrived. We then did a flashlight beach stroll in the dark....it was fun to spook the crabs. The next morning we had tasty donuts.... 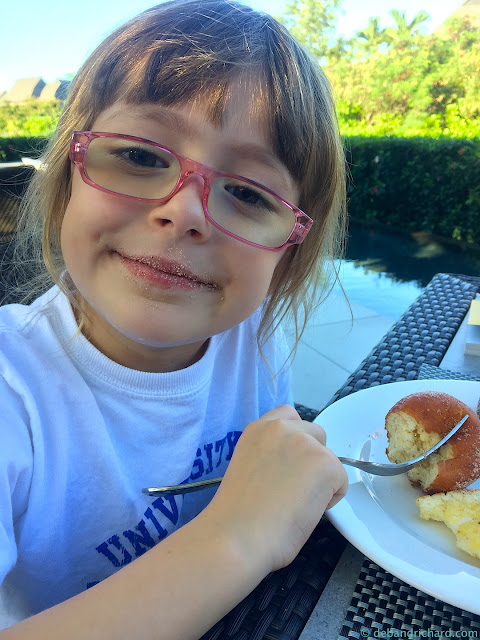 and found a giant slug, that had been in the middle of the sidewalk on our way to breakfast, had safely made it to the side on our way back! 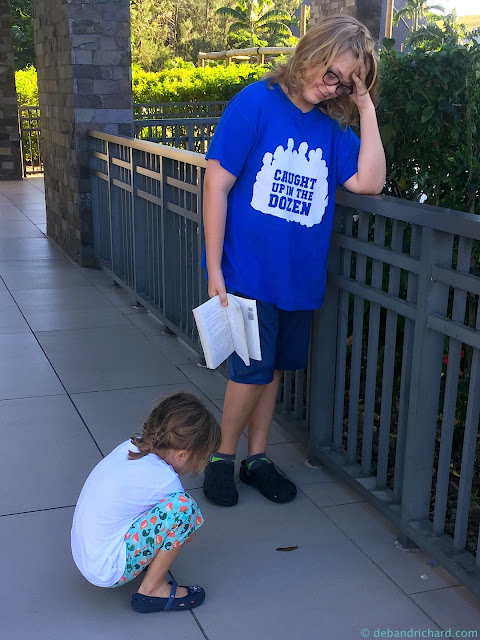 After breakfast we headed out to the reef to snorkel....definitely no Leleuvia....the current was strong and of course the waves were breaking right on top of the reef. So we did not stay out very long. Did have time for a selfie.... 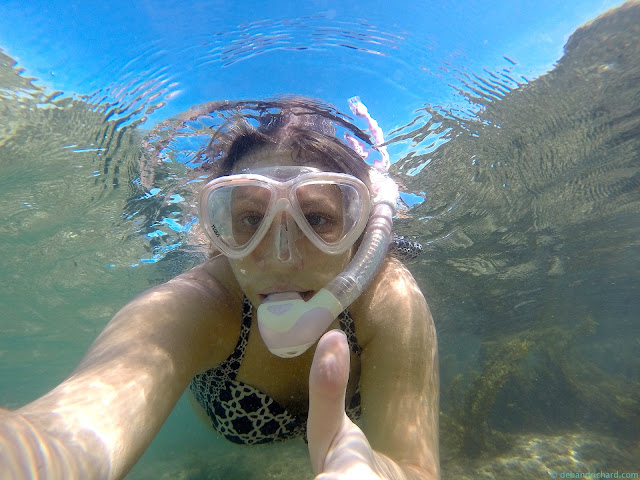 but didn't get many other photos/video...safety first. We then headed over to the family pool. I then snuck over to the adults only infinity pool for a bit....so quiet! 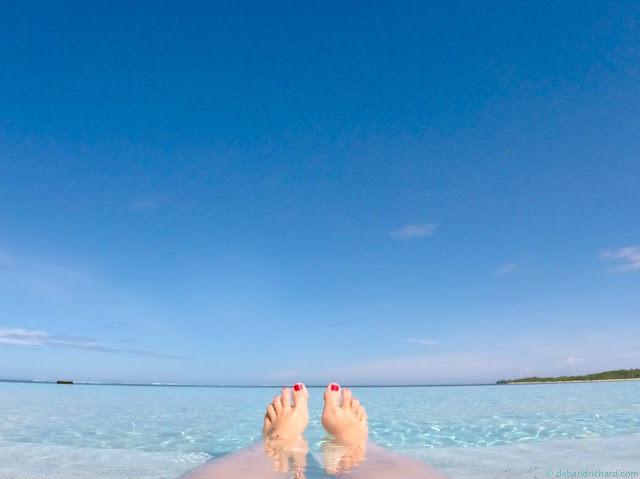 By the pools they have some round lounger/couches with a pop up umbrella/shade. We managed to snag one....perfect for cuddles. 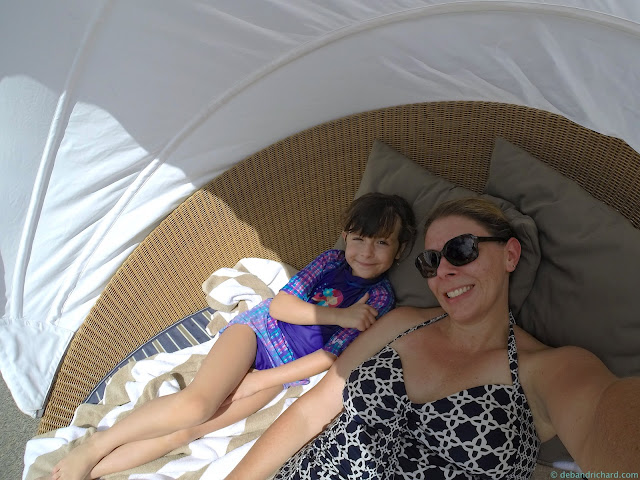 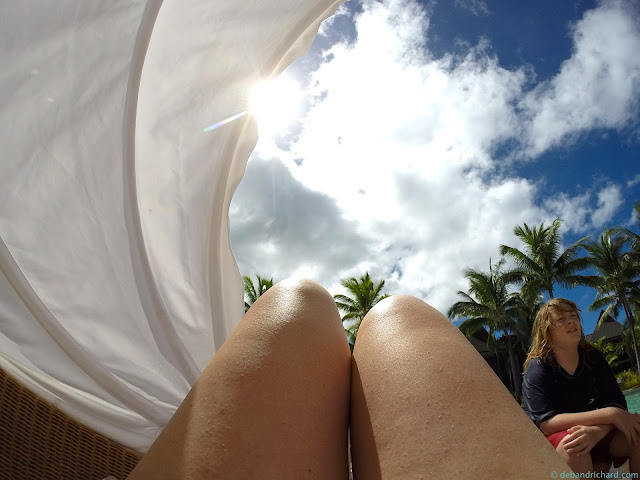 While we were there, a film crew was on location filming a movie (pretty cool if you ask me!). So the kids took the GoPro in the pool and channeled their inner directors. I will save you the motion sickness and just share a couple screen grabs. Apparently "my turn" with the camera, doesn't mean I'm the director and you are the actor/performer.....it means..... 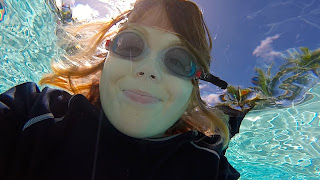 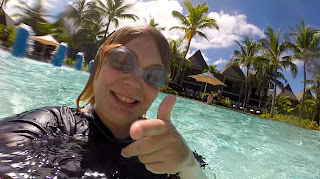 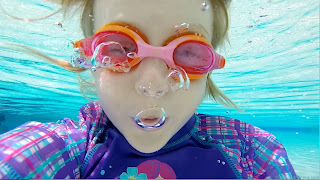 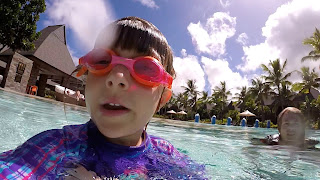 No concern here on the kid's ego development...lol. While Richard was in time out having his quite adult only time, the kids decided they were now starving (apparently snorkeling and swimming makes you hungry). So while some fancy cake by the ocean (seems a bit heavy to me), we opted for slushies and pizza by the pool! 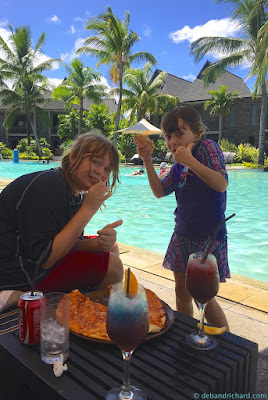 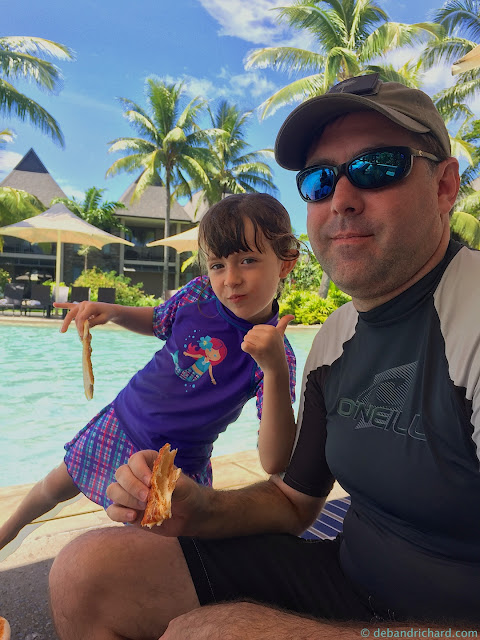 Our regularly scheduled swimming was then resumed..... 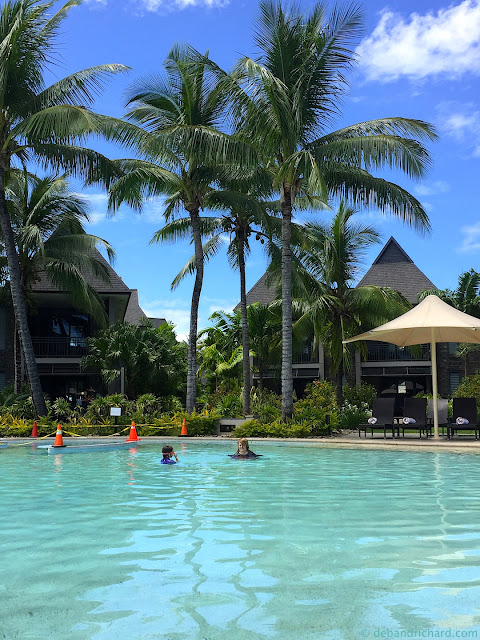 In the afternoon the kids headed to the kids club and Richard and I headed to the spa for massages (we are really missing our chiropractor and that was one of the first appointments we booked when we had our R&R plane tickets...lol....but seriously we did!). Afterwards, we all got cleaned up and in our kalavata (family colors). If you recall, on our Yasawa Island cruise we had tried to do some nice family photos with Fijian scenery but TD04 has some other plans for us. One recent weekend, Clarissa had put on her sulu jaba and we discovered she has nearly outgrown it (drawback of tailor made clothing...they fit perfectly...until you grow, like kids do). So we brought it with us to get some photos. 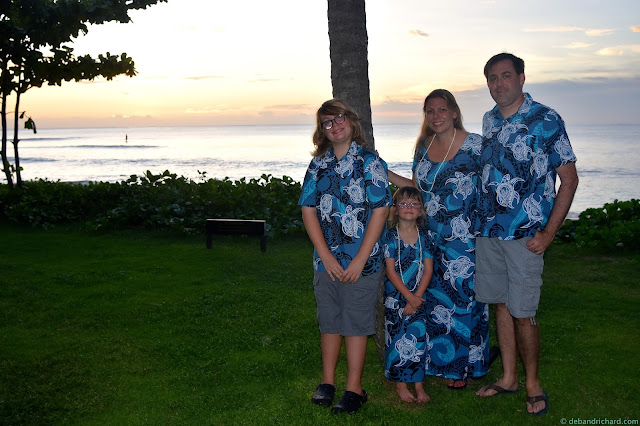 Yippee! My pretty 'family in kalavata by the ocean at sunset' photo (check out our facebook page for the outtakes). The Intercon does the traditional sunset torch lighting ceremony....which the beginning is marked by the blowing of the triton shell. 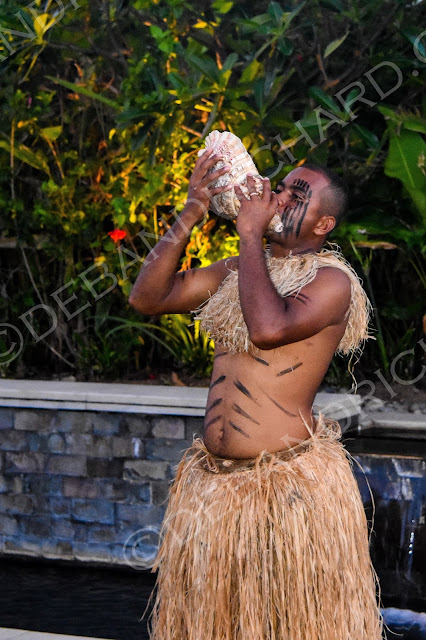 The sunset ceremony was enhanced by a movie scene being shot....(it's amazing how much time is spent setting up for a scene that takes maybe an hour to shoot that will end up being maybe 10 minutes in the whole movie). 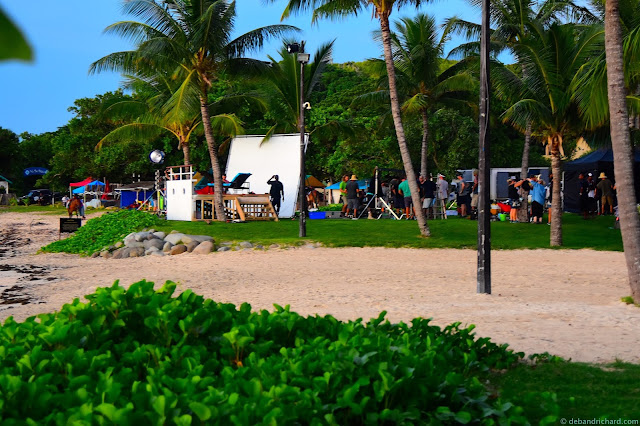 and further aggrandized by a SUPboarder! 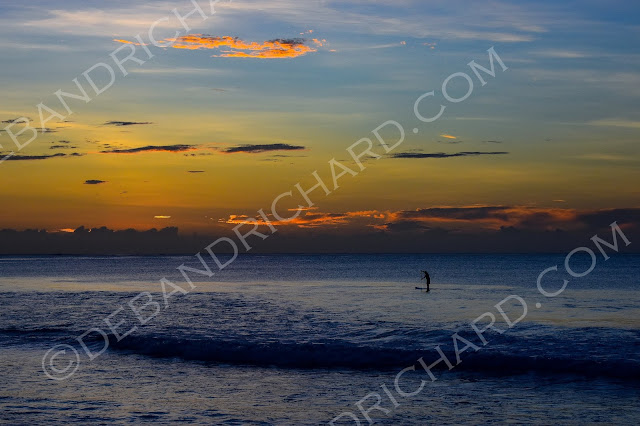 The next morning we took advantage of the late check out and opted to the take the boat out to the reef. Patiently waiting....writing in the sand with a stick.... 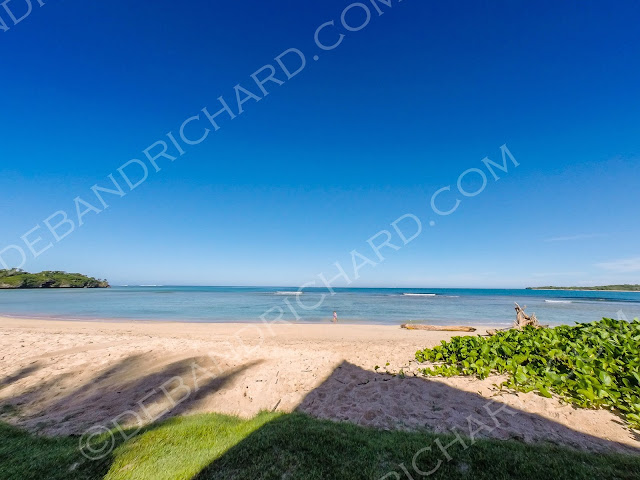 So the boat took us out to the second reef/break line you see out there. So the water was relatively deeper than we were expecting.  They had a PVC pipe square the guide pulled along for anyone to hold onto if they got tired. Clarissa adopted that as her personal snorkel pool as you can see. 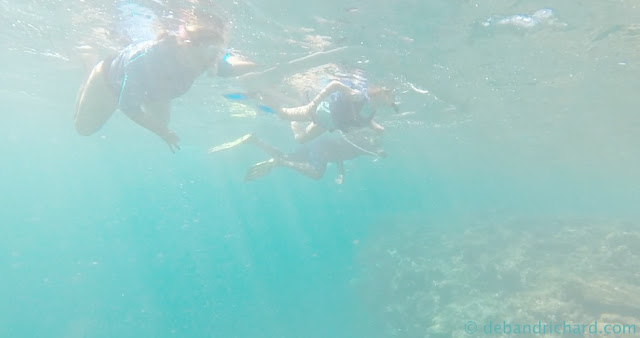 The current was strong so it ended up being a drift snorkel and as the water was rather deep we didn't get very much good fish video (should of put on the red filter to help with the lack of light). I did get this cool clip of the guide swimming down and messing with the "magic coral" as he called it (the googles says it is likely Cladiella sp., a hardy coral (popular in the aquarium biz)). It is initially brown in color, then when disturbed the polyps retract and you only see the white skeleton....viola...magic color changing coral....

After the snorkel...more pool time of course. By the way the kids swim in resort pools, you would think we don't have one at home and they never get to swim.....we then took turns showering and got all packed up. While checking out, I just had to take to a picture from the front desk, I swear they have to have a "blue dial" under their desk that they turn up when you are leaving to make you sad to be departing and mentally planning your next trip...lol. 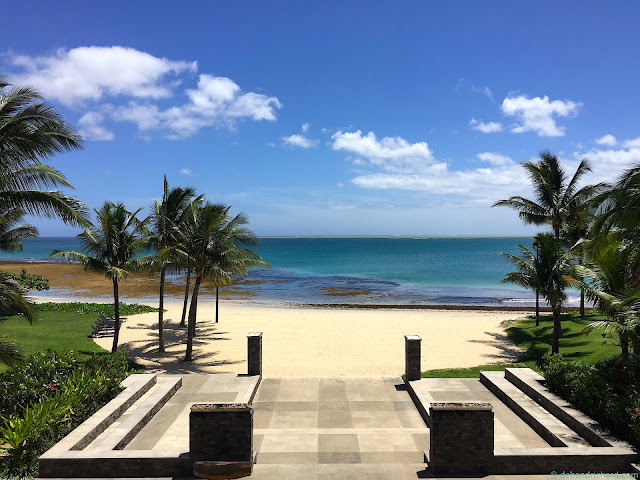 On our way home, we stopped for a late lunch at EcoCafe....on Monday, I showed you the most beautiful Triton shell. We actually saw two of them just laying on the beach. Everyone in the restaurant took turns going down and holding the shells...we aren't really sure how they ended up right there (sitting at the high tide line, though it was now low tide). So beautiful though. Clarissa and I took photos holding the tritons so you could see just how big they really were (she had the oddest/unflattering expression....so you are stuck with the photo Clarissa took of me). Since, Richard and I have both done some google research on the Triton...they are quite handy little snails! They will eat the nasty crown of thorns sea star that destroys coral. According to the wikis, tritons will detect the scent of their prey and will turn and chase them down. The crown of thorns, as well as some other prey, can detect the giant snail hunting them down somehow and will attempt to flee before any contact has occurred! Science (animal behavior) is cool kids! 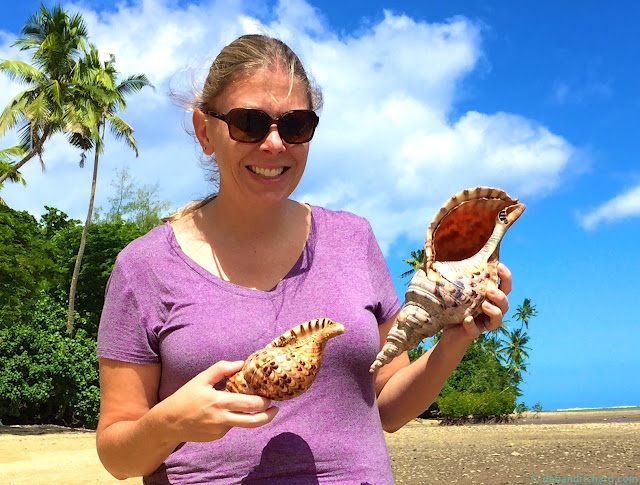 It was a fun weekend away at one of our favorite resorts!
Posted by Deb at 9:30 PM