Weekend at the Warwick

So based on the number of resident specials available during the month of February, we discovered that there is a low season at resorts in Fiji (we also discovered that it rains a lot on the dry side of the island during February too....hence the low season at resorts...lol). Over President's Day weekend in February, Richard had an extra day off work so we decided to take advantage of one of the resident specials....we had a lot to choose from. We ended up going with the Warwick Resort along the Coral Coast....they had us at "complimentary couple's one hour massage"! How could you beat that!

So Friday after school, the kids got home and changed out of their uniforms. We then picked Richard up from work (he ended up having to work a little late) on our way out of town. It rained a good portion of our drive up there which didn't bode well for a fun weekend.....at check-in we saw the kids club schedule for the next day (looked like lots of fun!), but unfortunately the break for lunch was during our couples massage....so we had reschedule for two individual massages....still works! We had a little dinner and called it a night. The next morning we woke to some light rain....yeah! We went to breakfast, Clarissa put on a fashion show.... 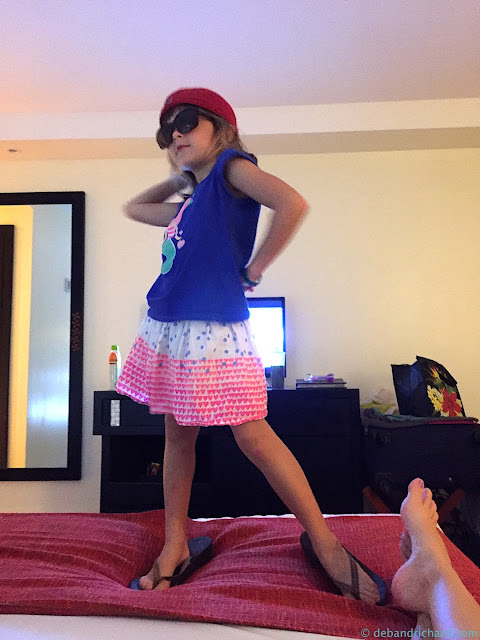 and then she headed over to kids club (we had heard a lot of great things about it and the schedule looked really fun, fish feedings, crab races, etc). (Mason wasn't feeling so hot the previous night/morning so he opted to rest). We ran into Sigatoka to do some shopping. On the sidewalk, they have a really neat plaque honoring last years gold medal Olympic team! At least it was close when they beat the USA....lol. 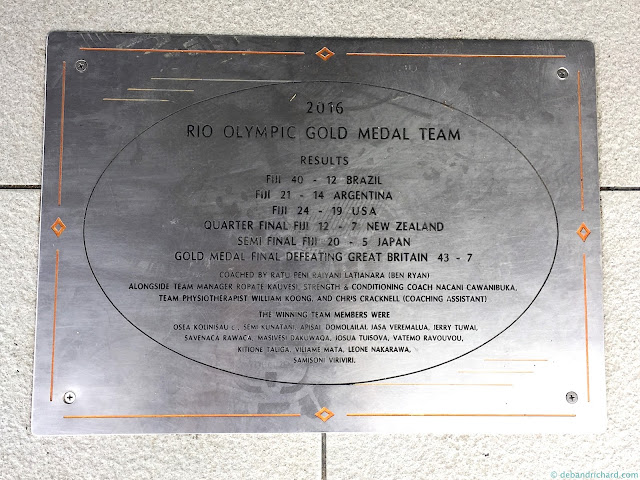 When we got back, Richard headed to his massage and I picked up Clarissa. Due to the rainy weather, most of the fun kids activities were cancelled in the kids club and Clarissa hung out and watched movies...bummer. The kids and then went over for their free lunch. Then we switched and I got my massage...woohoo! Luckily, the weather had cleared some and the rain had stopped. So when the kids were in the pool when I got back. I then was horrible and insisted on mandatory fun and we headed out to the reef for some snorkeling (can't wait till later since we have ebbing tides to deal with). Clarissa was immediately in blue sea star heaven...picking up everyone that she saw! 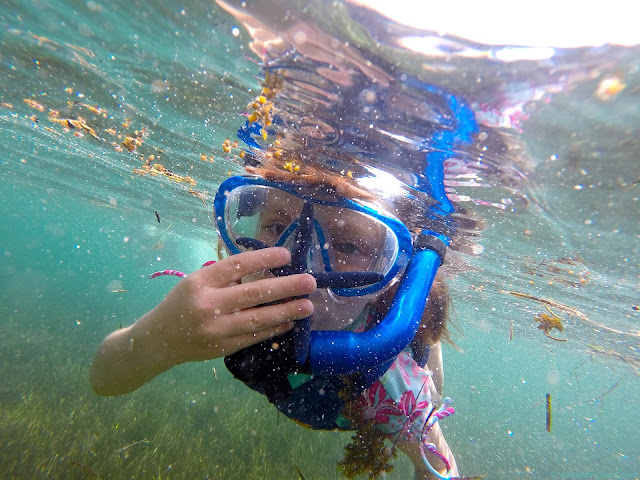 We also lots of cool fishes that we stalked. 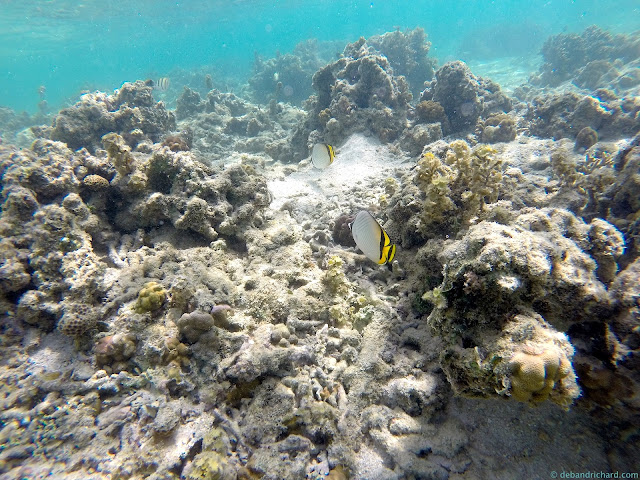 On the edge of the sea grasses, we found two relatively small Giant Clams! Though they were less than a meter apart, their mantle colors were slightly different. (It's thought a variety of factors affect mantle color but nobody knows for sure). 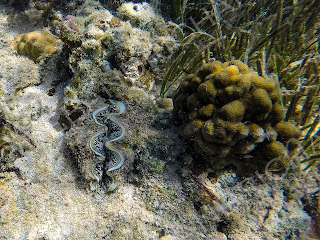 Just for a 'keeping it real' moment....even while snorkeling in a Fijian paradise, kids will arguing and fight semi-submerged....and I am kind enough to let them work it out on their own to learn life skills, (but in the mean time I will not only document it, I will share it for your viewing enjoyment)! 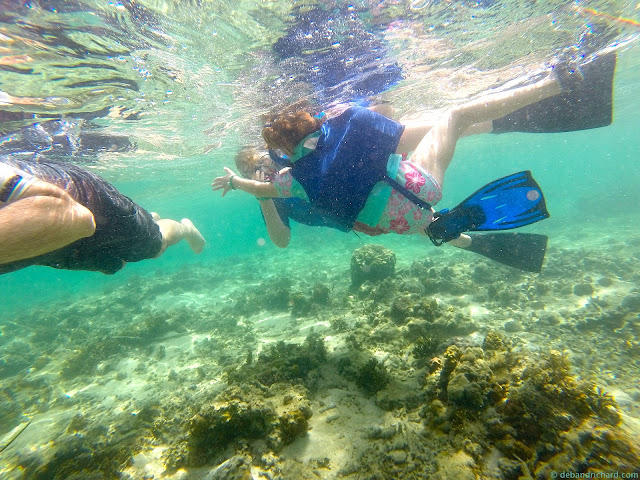 After some more pool time, we all got cleaned up and headed to kids favorite South Pacific pizza joint....Eco Cafe for dinner. Afterwards, we walked around the shoreline and enjoyed an obscured sunset. We headed out on some of the little jetties and you could see lots of little fishes swimming around. Clarissa and I even saw an eel, but it quickly hid! 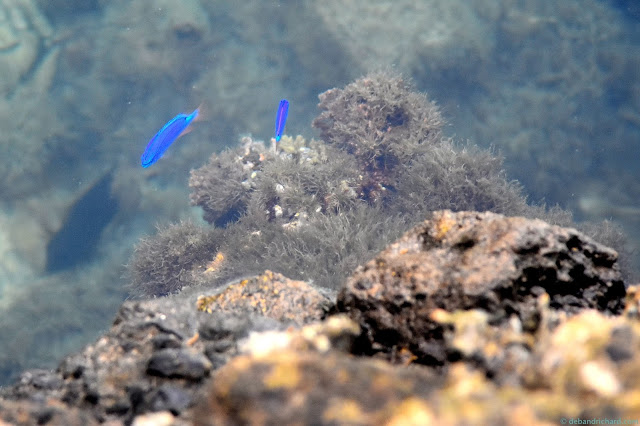 The shy sun hiding behind clouds....but lots of nice reflections. 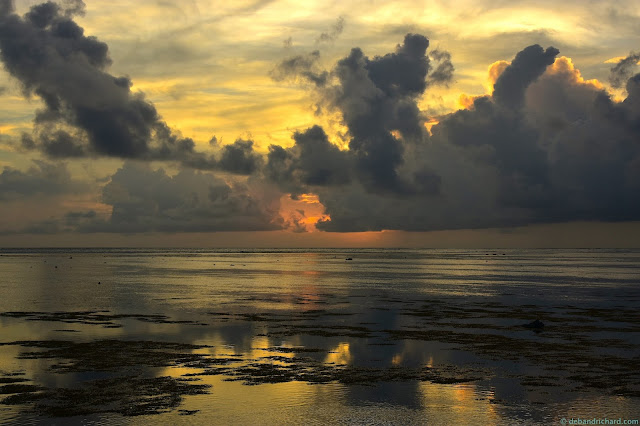 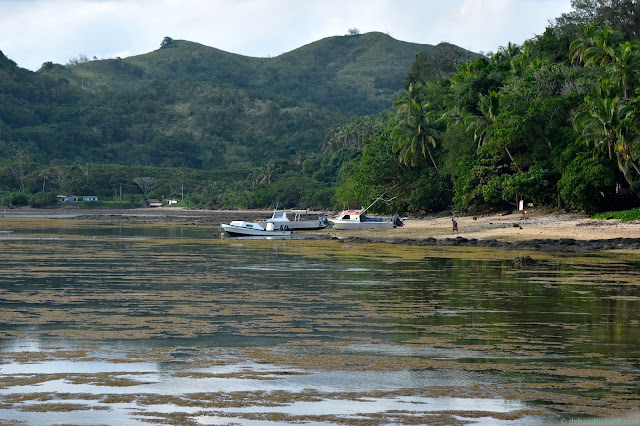 So the majority of the land in Fiji is native land that can not be bought. So a resort will obtain a 99 year lease to a section of land (typically right next to a village), my understanding is some of this lease money goes back to said village or there is a nightly surcharge that is for the village.. Here are some photos of the village adjacent to the Warwick.....nice waterfront location! 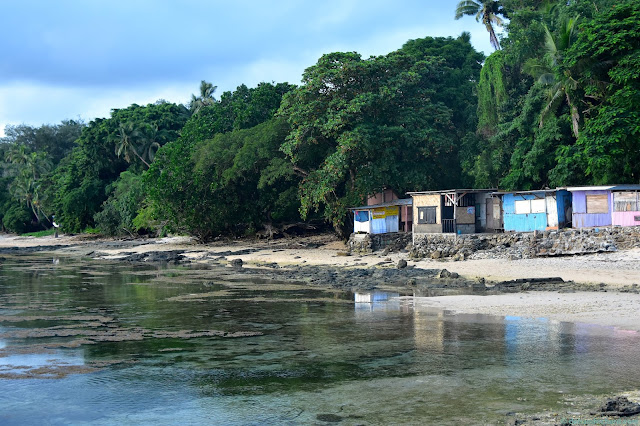 Note the rain coming down close to land....a storm is a coming.... 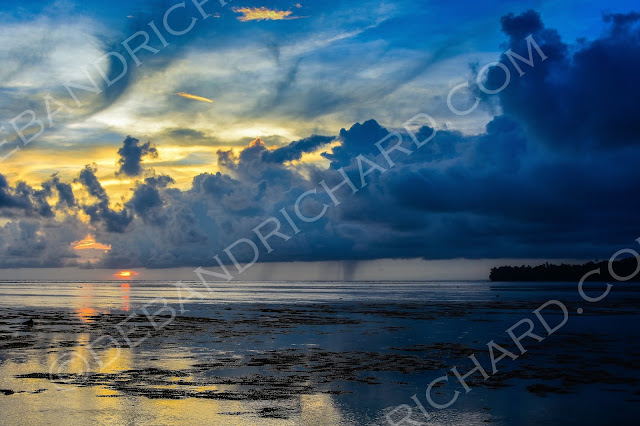 But let's zoom into the sunset instead of focusing on the rain....much better! 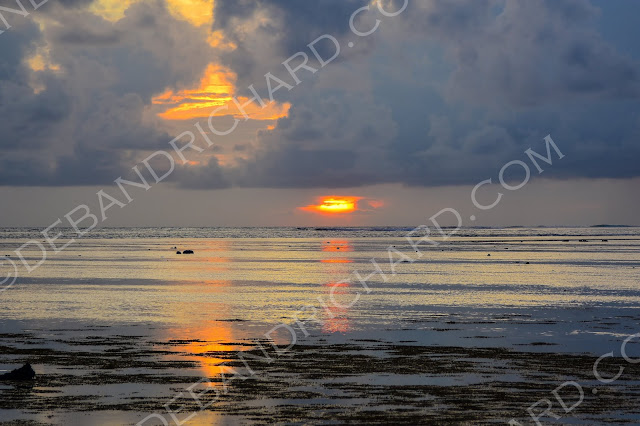 Fire power.....pretty happy with how that turned out! 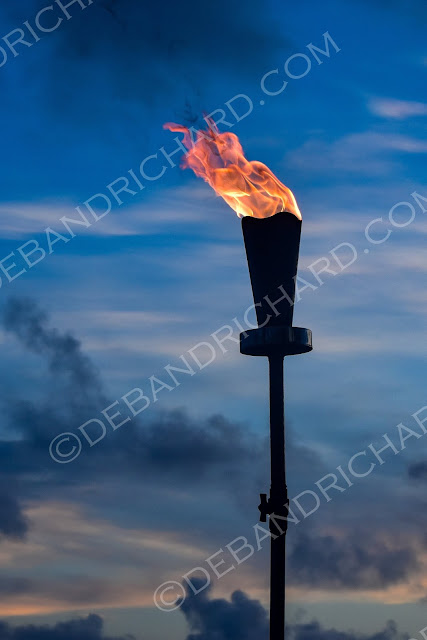 At some point, the kids headed back to the room to play on iPads (free wifi w/o mom & dad hounding them on usage....too bad it was really sssssllllloooowwww), so Richard and I went and enjoyed a cocktail (piña colada if you remember....lol). From the balcony bar, I got this pretty cool shot from there. 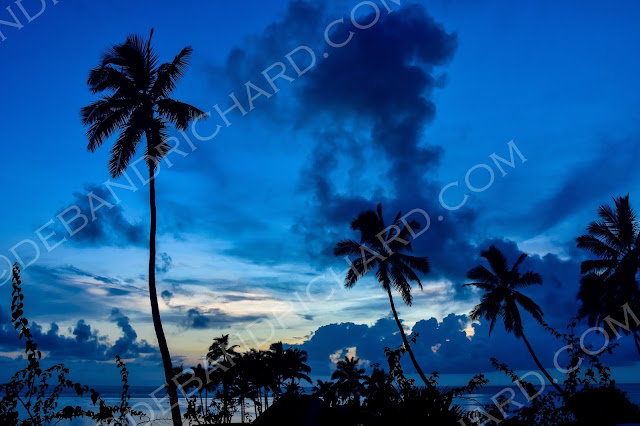 I guess if there has to be clouds, at least they give photos some "texture" and make them a bit more interesting. After some more nighttime showers, we woke the next morning, of course, to bright and sunny skies! We did have a late check out, so we snorkeled a bit and chillaxed at the pool some before heading home. The kids opted to cut their snorkeling short for pool time. Richard headed in with them while I snorkeled some more (he then went back and snorkeled more after I came....darn required adult supervision...). While I was out solo.....I saw a black tip reef shark! I barely caught it on video.....so here is a enhanced screen grab.....but so cool. I'm not sure if Richard and the kids believed me until I found the video and was all there it is....and then there were all 'oh yeah'. 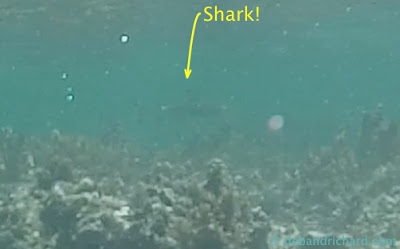 Again, not the best photo.....but that's what sharks do...they lurk in the shadows.....It was not all that big maybe about a meter long. What weekend resort blog post with snorkeling would be complete without a little highlight montage video? So here you go....watch for giant clams, an eel, a crown of thorns, in addition to your usual schools of fishes.


Here's a little out take video of silly snorkeler antics....


All in all, it was semi rainy/nice weekend away. It rained most of the time in Suva, so at least we got some sunshine. While a nice resort, it was not our favorite in the area....so not sure if we will venture back to the Warwick again or not. We are starting to see the end of our time in Fiji and there are so many other places we want to visit.....
Posted by Deb at 11:18 AM