The little elementary school that could.....

So I try to blog in a relatively chronological order...but sometimes I get really far behind or get started on a post that I never quite finish....this is one of those. Back in mid-October, I had the opportunity to visit a school up in the Ra district. If you recall, back in February Tropical Cyclone Winston hit Fiji and hit it hard (that was another one of those posts I never got to but we did move a month or so afterwards and then life kept me busy). So I'll give it a bit of wall space on the blog now....

So Richard grew up in South Carolina and survived Hurricane Hugo in 1989 which was a Category 5 hurricane with wind speed speeds topping out at 162 mph and lowest pressure of 918 mb. I went to college in Florida and survived Hurricane Opal in 1995, which took the prize of being the only Category 4 hurricane with getting as low as 916 mb (wind speeds topped out at 150 mph) (thanks Wikipedia for the historical factoids!). I didn't realize how nasty Opal was until it brought up in the news when Katrina was barring down on the Gulf Coast. So when Tropical Cyclone Winston start coming around Fiji, Richard and I kept are eye on him and started watching the weather. TC Winston had a peculiar track line.....it kept swinging by us....first went by us to the west, then went past us to the south, then it did a 180 turn, and put Fiji in it's cross hairs and came directly at us (that's when we started to worry). I found this map online and it shows the whole track line. 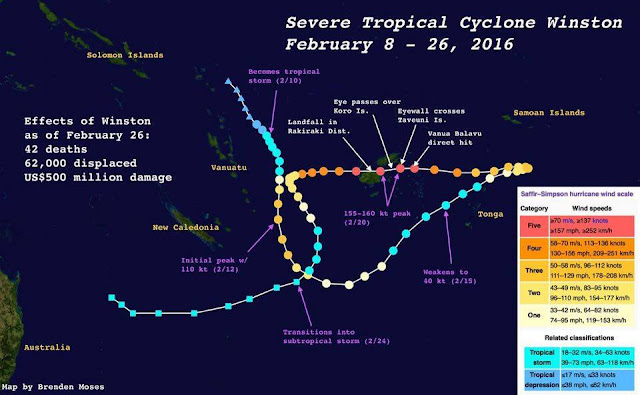 We hypothesized that in the US, due to the big landmasses storms get slowed down and fall apart typically, here in the South Pacific without any big land mass nearby, TC Winston must of hit some pressure change that caused it to turn but nothing to ever slow it down/stop it, hence all the stalkerish drive-bys. TC Winston was the strongest cyclone to make landfall in the southern hemisphere in recorded history....as a category 5, with peak wind intensity of 230 km/h (145 mph) and lowest pressure of 915 mb (again, thanks wikipedia).

TC Winston was a beast of a storm. It hit February 20 and I went to visit this elementary school in October....eight (8) months later....you read that right. As you drove close to the school, you could see people still had tents in their yards. The school we visited still is missing a roof over several classrooms (and it is not the only one)! 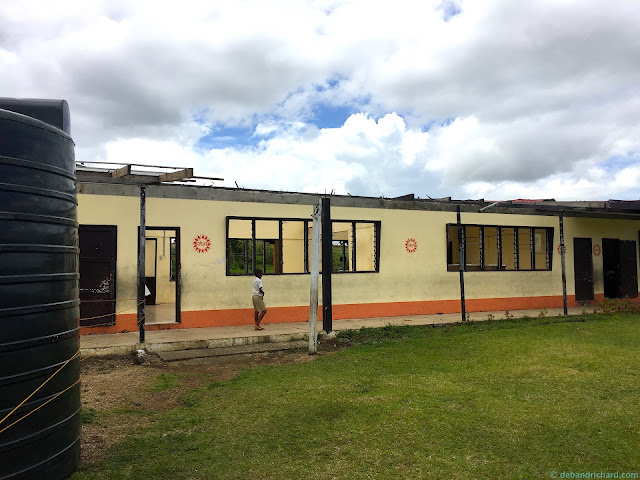 Facts tables separate the temporarily roofed classroom from the unroofed one... 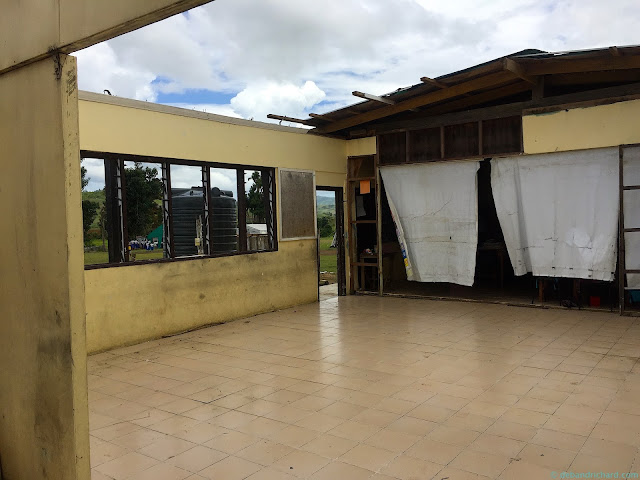 Luckily a number of AID organizations have donated tents for the school to use in place of the missing classrooms. 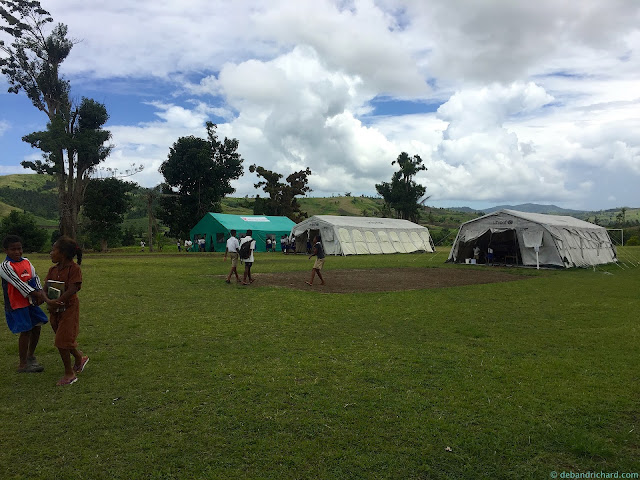 I went to photograph the inside of classroom tents....one group was shy as it appears I interrupted their morning tea..... 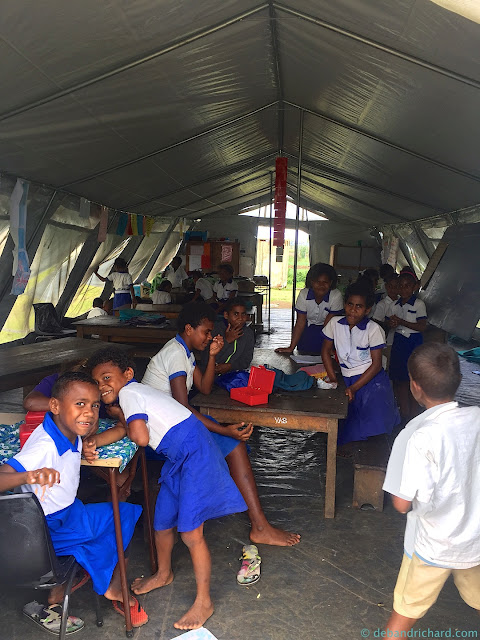 Another class raced out to have their photo taken! 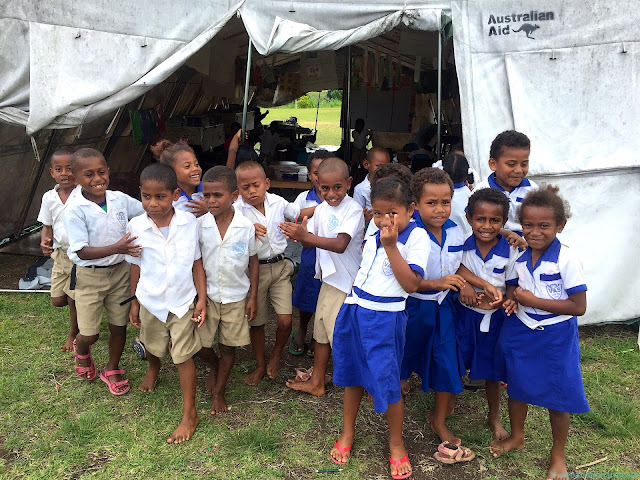 They were all Year One students.....so they were 6 & 7 year olds....I told them my little girl was 6 and showed them a picture of Clarissa.....we were then friends and started taking selfies.... 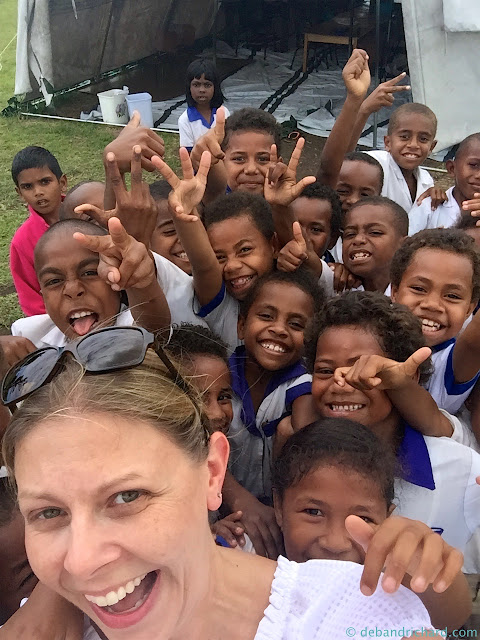 So my main reason for going up there was a friend of mine is working with a local rotary club. They are helping the school rebuild....and one 'project' we did was help some with the library. 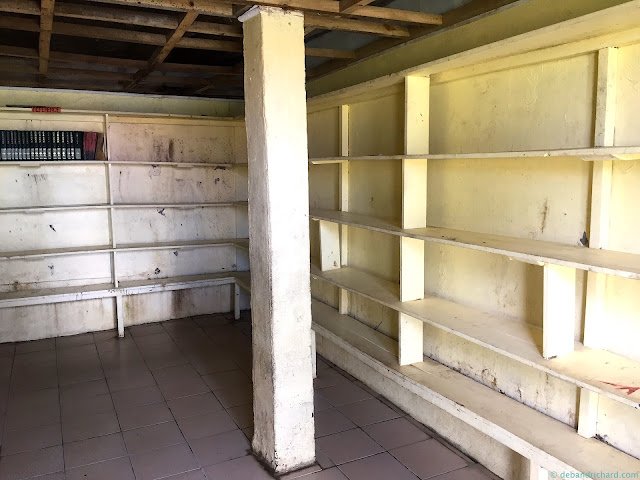 The school was able to save some books in plastic tubs prior to the storm hitting but wind and water were not nice to a lot of the library (also following TC Winston, when trying to dry everything out, TC Zena came by and dropped a lot more rain on Fiji). My friend had collected some donated books and art/school supplies and we were delivering them to school. 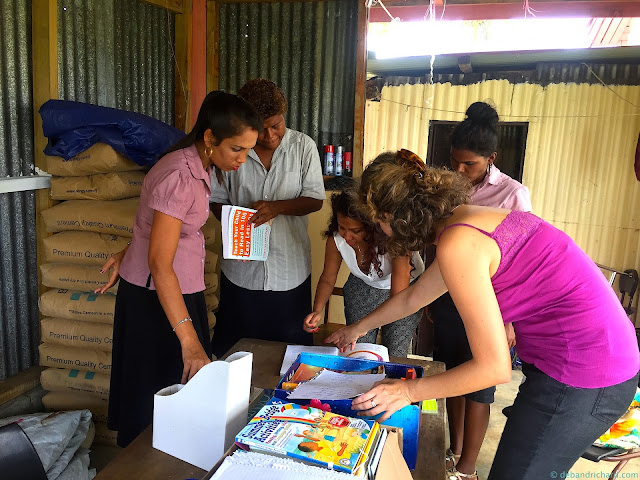 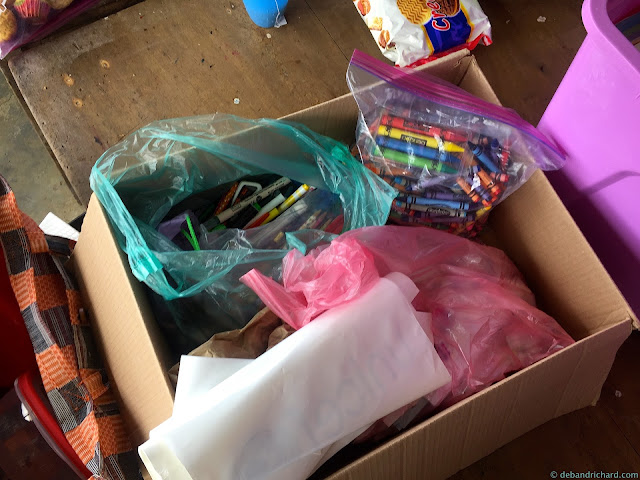 We also took the some snacks up to the teachers for a morning tea treat (one of the male teacher's wife was out of town....he really appreciated the food too!). 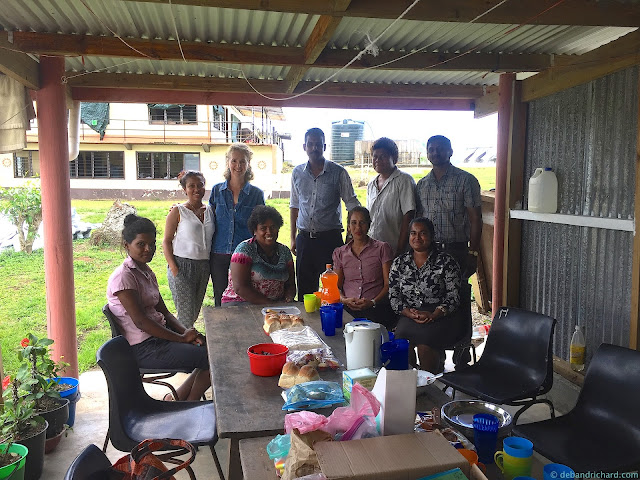 While we were at the school, an aid organization that has finally made it through all the paperwork arrived and hopefully construction of the roof will be completed soon....as the next cyclone season has begun already.  It was a lovely day and great to see a little elementary school that is still chugging along without a roof but the kids were happy and learning....I'm also excited to know that as Clarissa becomes a stronger reader and outgrows the early reader books we own I have a wonder place to donate all those books to (and save us weight on our next pack out!).
Posted by Deb at 8:04 AM