Over the weekend, the Erisioni Georgian Dance Ensemble was performing at the Tbilisi Philharmonic Concert Hall. The CLO office reserved 2 rows of seats (I think 80 seats). I kept forgetting to go by and get tickets....when I finally made it in, I got the last ticket.....so me day no guilt :)

According to the website Georgia About, the folk dance troupe was established in 1885 and performs the national dances and songs. Erisioni performs all over the world (so if you ever see them in your area, go! It is so different than any thing I have seen). You can find some more info here on their Facebook page. They typically perform in Tbilisi twice a year, around the holidays and in late spring.  The show they performed on Sunday was called Georgian Treasure (ქართული საგანძური).

The show is very male centric, which should not come as a surprise given it is a patriarchal society. There was a group of male singers, all musicians were male, and large number of male dancers. The females were beautiful and for many of their dances they were gracefully floating. It is possible I noticed this more than most, since when Mason did dance at First Baptist he was the lone boy. Another thing I noticed, even though the men and women danced together, only in one dance did they ever actually touch. 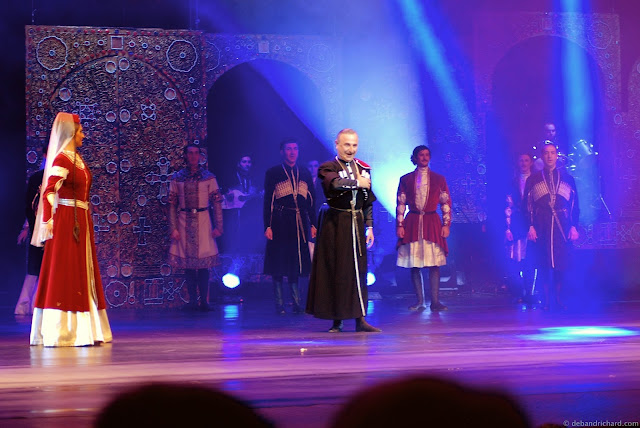 The opening dance is called Davluri and it is a dance that portrays city aristocracy. 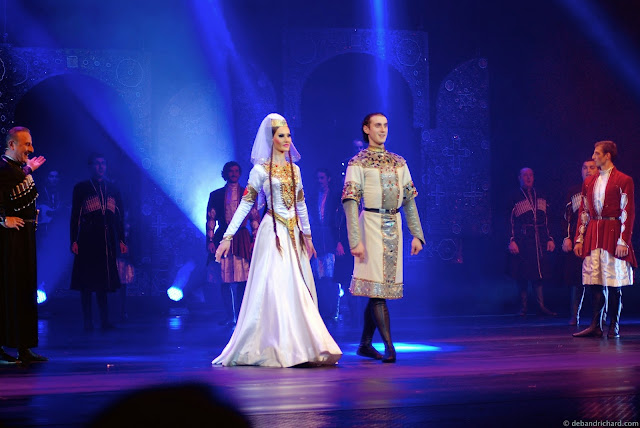 I did notice that the women wore the same shoes, but with different size heels, I guess to give them all a uniform height as they floated around. One of the guys in our group, Larry, set up a camera on stage and was able to get a good shot of their heels (check out his website for more images). 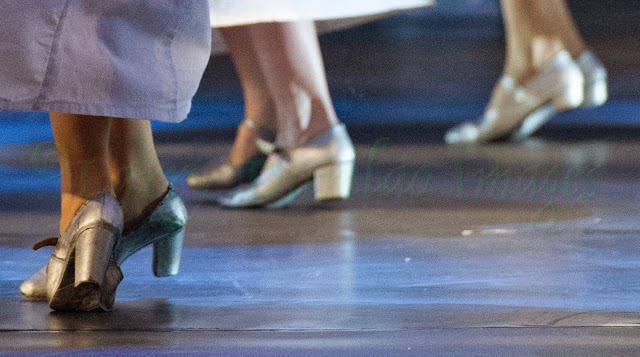 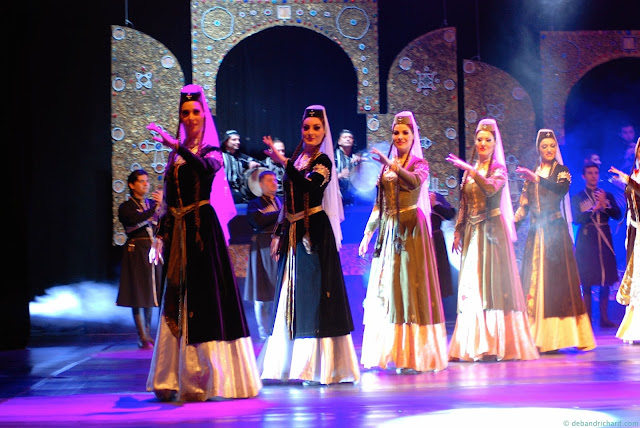 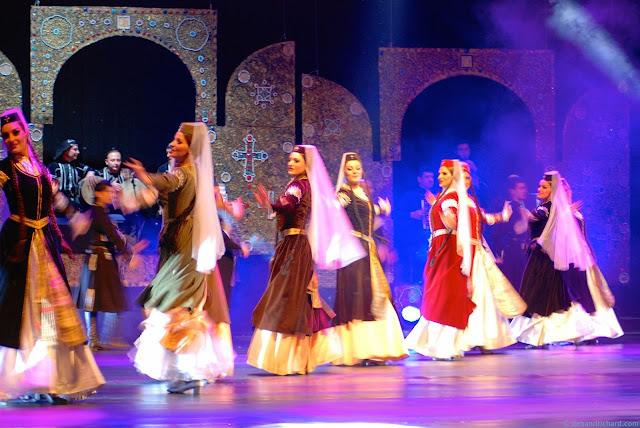 A Doli is a Georgian percussion instrument (a type of drum) and played with palms and fingers. They had a group of young boys play the drums.

This song had a great drum beat, for the dance the men that appeared to be in search of enemies. I think this type of dance is from the Imeretian region. 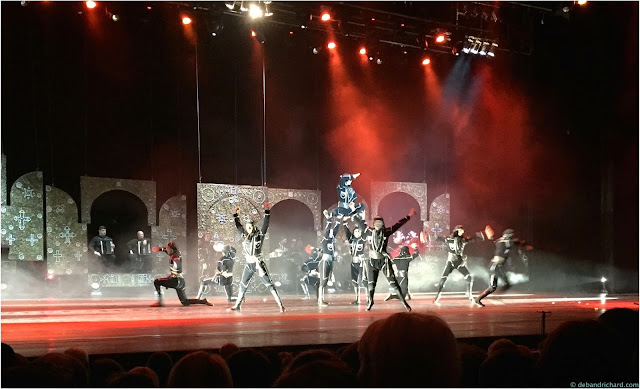 Check out the air the man leaping towards the left got! 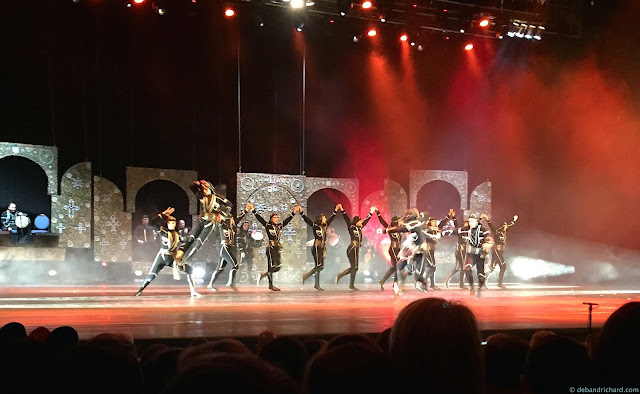 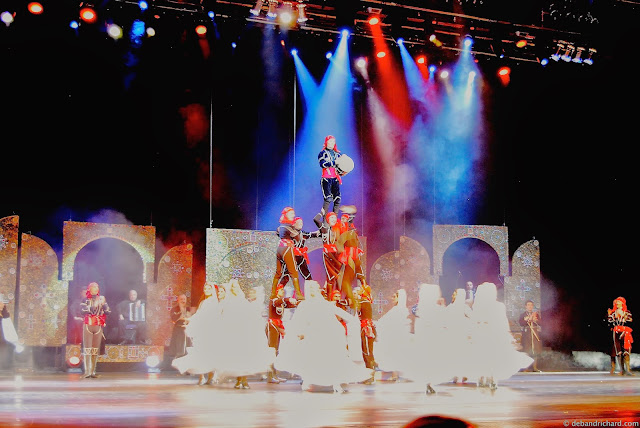 I think this dance was called Nana. It appears to be a type of wedding dance.

I think this is a Svan region dance, called Svanura perkhuli. 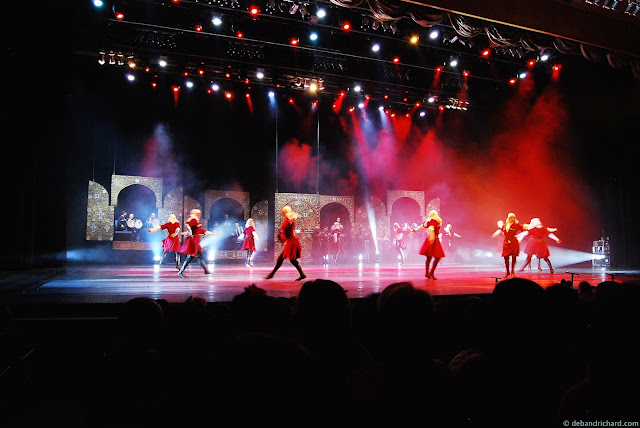 There was a number of songs that were sung by a group of men. Though I didn't understand any of the Georgian sung, it appears they were singing in two competing groups going back and forth. Sometimes they would seem very heated and argumentative; sometimes they would all come together at the end. 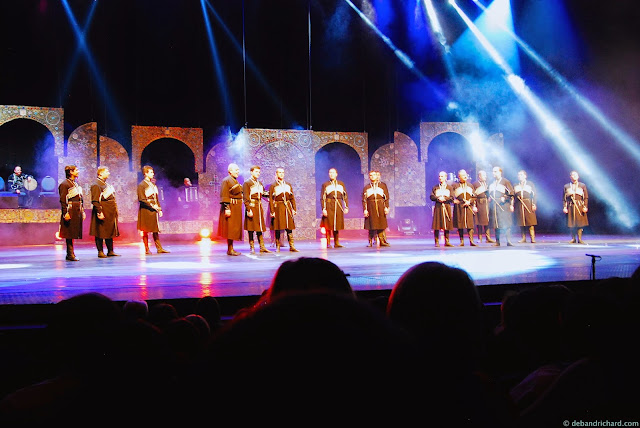 I think this is a Mtiuluri type dance, with the men performing tricks (prepare to see leaping and landing on their knees, dancing on their toes, and spinning so much you will feel dizzy). The title was Harira, Marula.


Following intermission, they began with an Abkhazian dance. The women's dresses were shorter than most of the other dances and a pretty lavender color.


This is Gandagana, to me it had a bit of a middle eastern flair (possibly from when Arabs occupied Georgia in the Early Middle Ages). The old man was just adorable, as were the kids that performed in this dance.


Playing the panduri, a Georgian 3 string guitar (Mason picked up a miniature one up on our trip).


I think this song is Mtielebi. The dancers are shepherds dressed in red or black chokhas (wool coats) and papakha (sheep's wool hat). The chokhas have been worn since the 9th century. In the dance, they compete with one other. 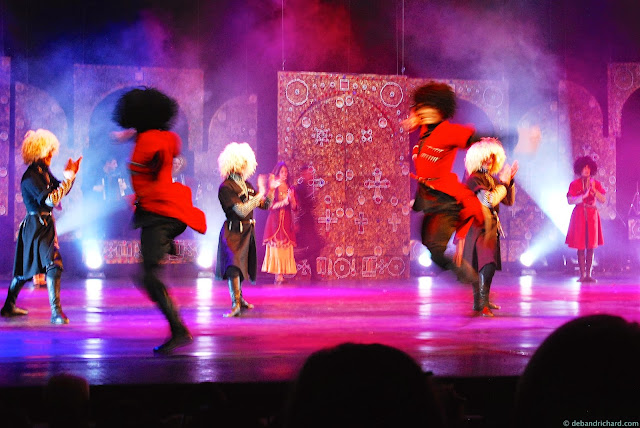 The next song was Simdi. I think it is an Ossetian wedding dance. In this dance, the men and women did touch, but just holding arms type touch. There was some very impressive line formations. 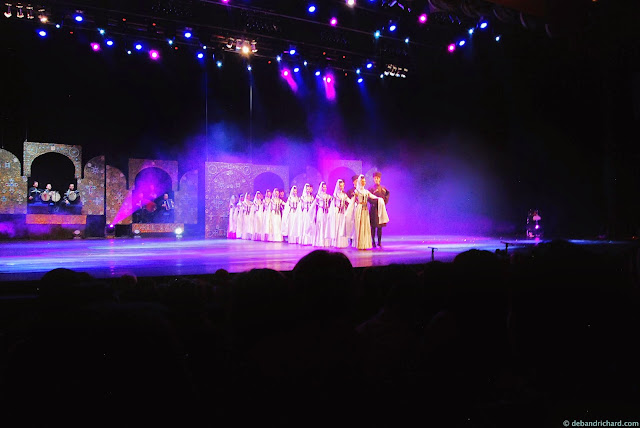 Near the end of the show, they did a dance called Khevsuruli. It is a mountain dance. It shows a conflict between two men and their supporters over a woman. Women enter during the dance and wave veils to stop fighting. As soon as the women leave, the men begin fighting again. I got some video of the sword fighting....and yes those are sparks flying off the swords....that is some pretty amazing choreography.

At the end, all the dancers came out, with a variety of the different traditional dress on.

I really like the Georgian pride with the guy on top of the pyramid with the flag. 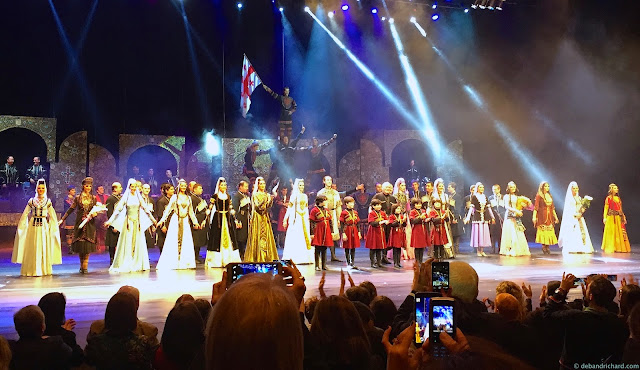 The music was very loud and I think Clarissa may have not enjoyed that (she doesn't like loud places). Given he took dance and most of the show was men dancing, I think Mason would have enjoyed it. Hopefully they will be back in town before we depart post and we will all go.

Note: Since the program was mostly in Georgian, I attempted to figure out the stories behind the dances by accessing the power of wikipedia....so I apologize for any misinterpretations I have made.
Posted by Deb at 12:35 PM