Having survived the plague (really a 5 day fever that took out 3 of us and graduated into an ear infection for Clarissa and an upper respiratory infection for me), Richard had a day off last Monday  (Georgian Mother's Day...but the kids had school).....so went to do some sightseeing sans kids downtown.

We parked near the Peace Bridge and walked from the left bank over to the right bank of the Mtkvari River. The bridge is lit up at night with LED lights and I read that is blinks a morris code periodic table. 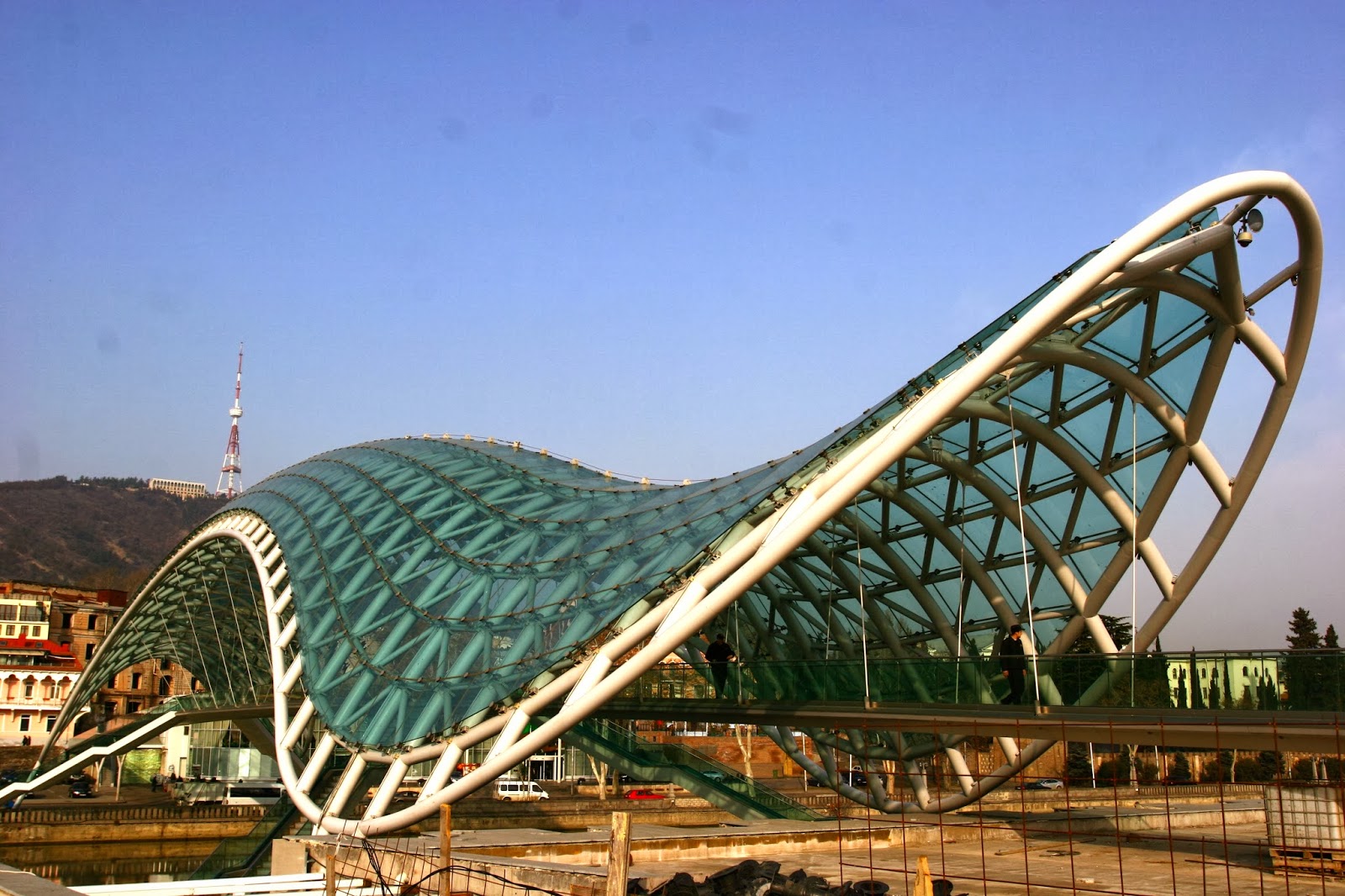 On the left bank, there is a park with trails between gardens as well as a playground and a giant piano! I am not sure if the piano actually functions or not, but it was pretty neat. 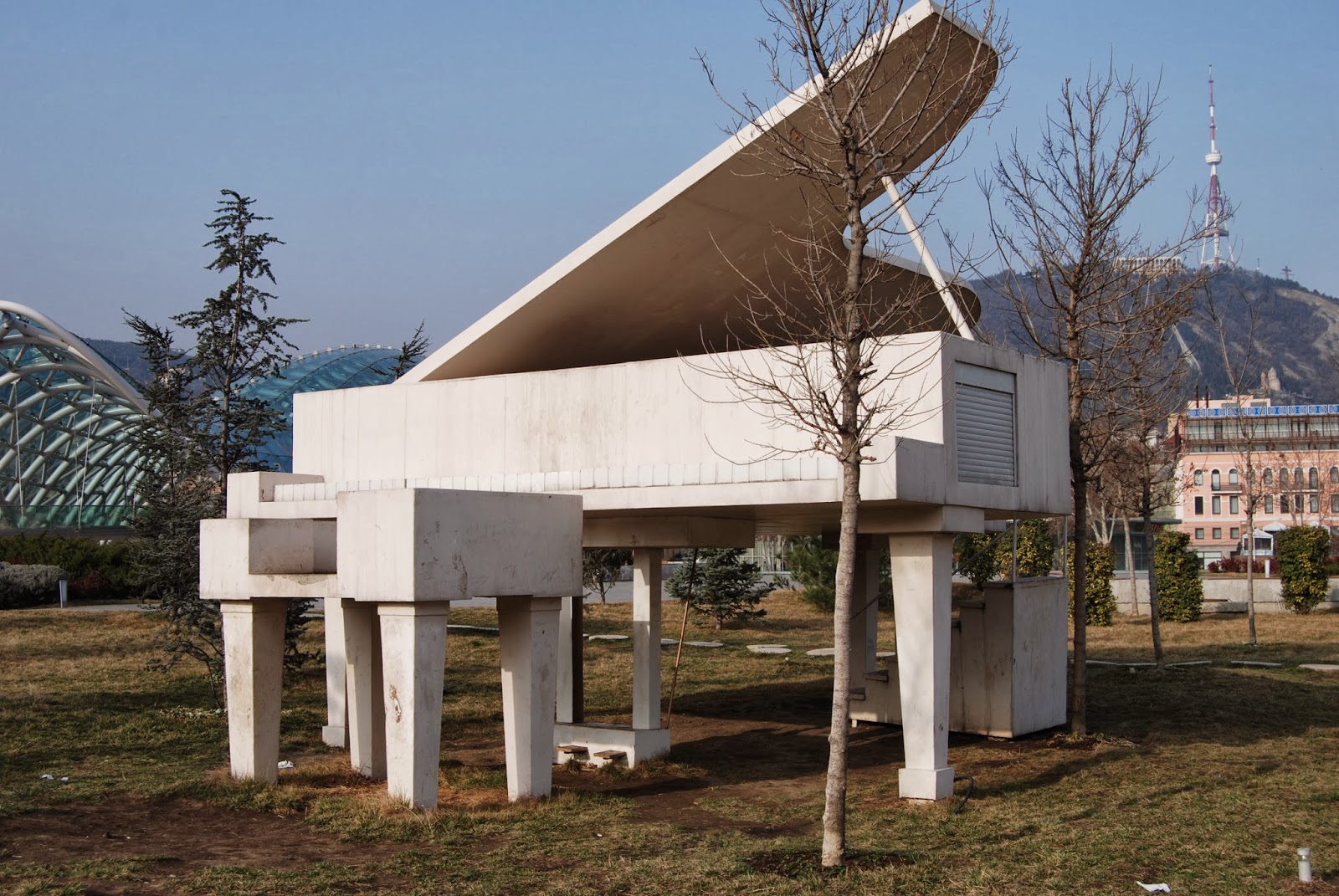 Crossing the bridge over the meandering river. 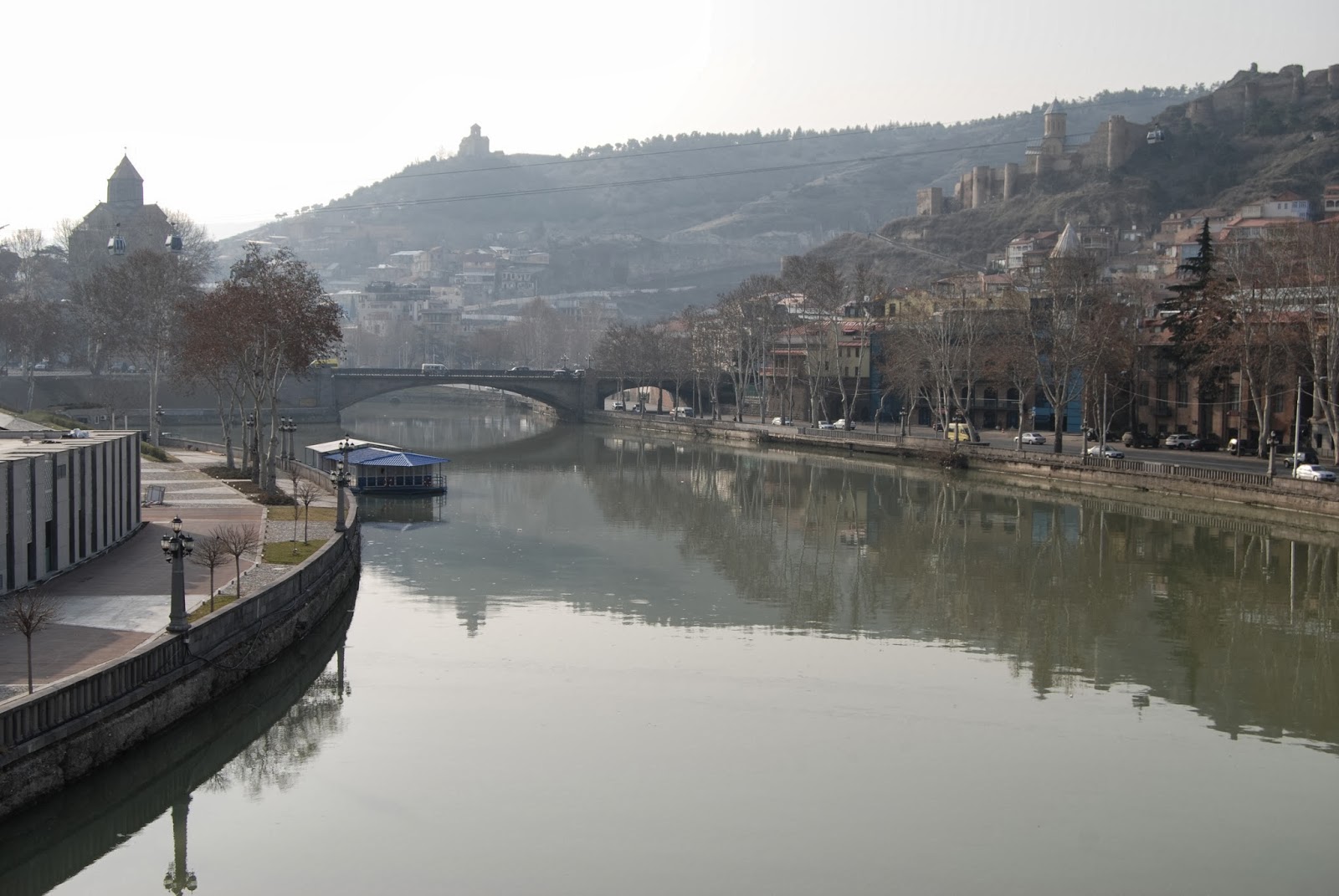 After crossing this bridge we came across this statue. It is a Georgian poet/folk singer name Ietim Gurji who wrote his poems/songs about Caucasian people (aka locals....people of the Caucasus Mountain region....which makes me wonder when noting race on forms in the US why do we mark caucasian.....things that make you go hmmmmm). 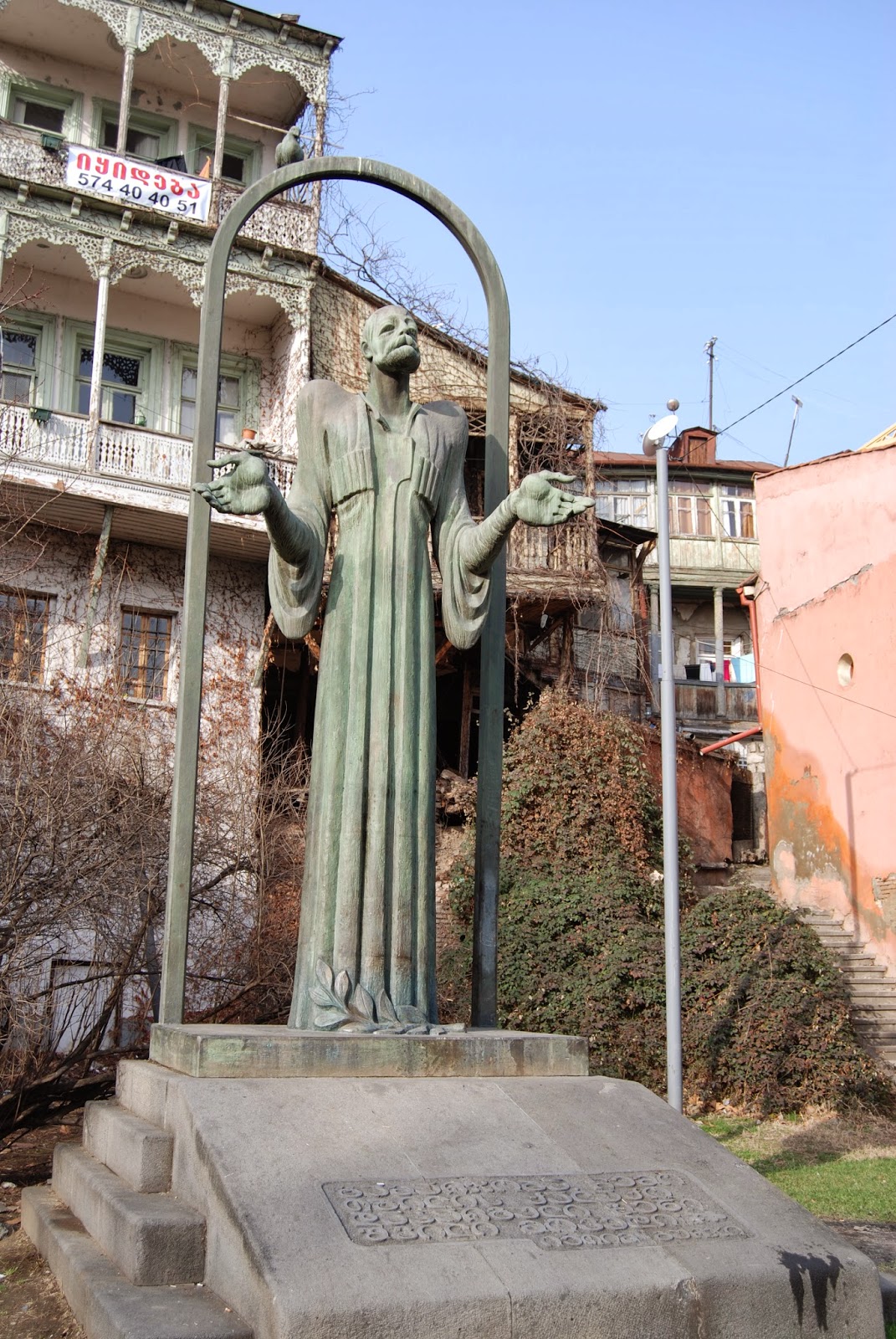 What really caught my eye was the housing behind the statue. You can tell some buildings are lived in/rented out (especially the one with the satellite dish on the roof) but then the one in the middle seems to just be disintegrating. 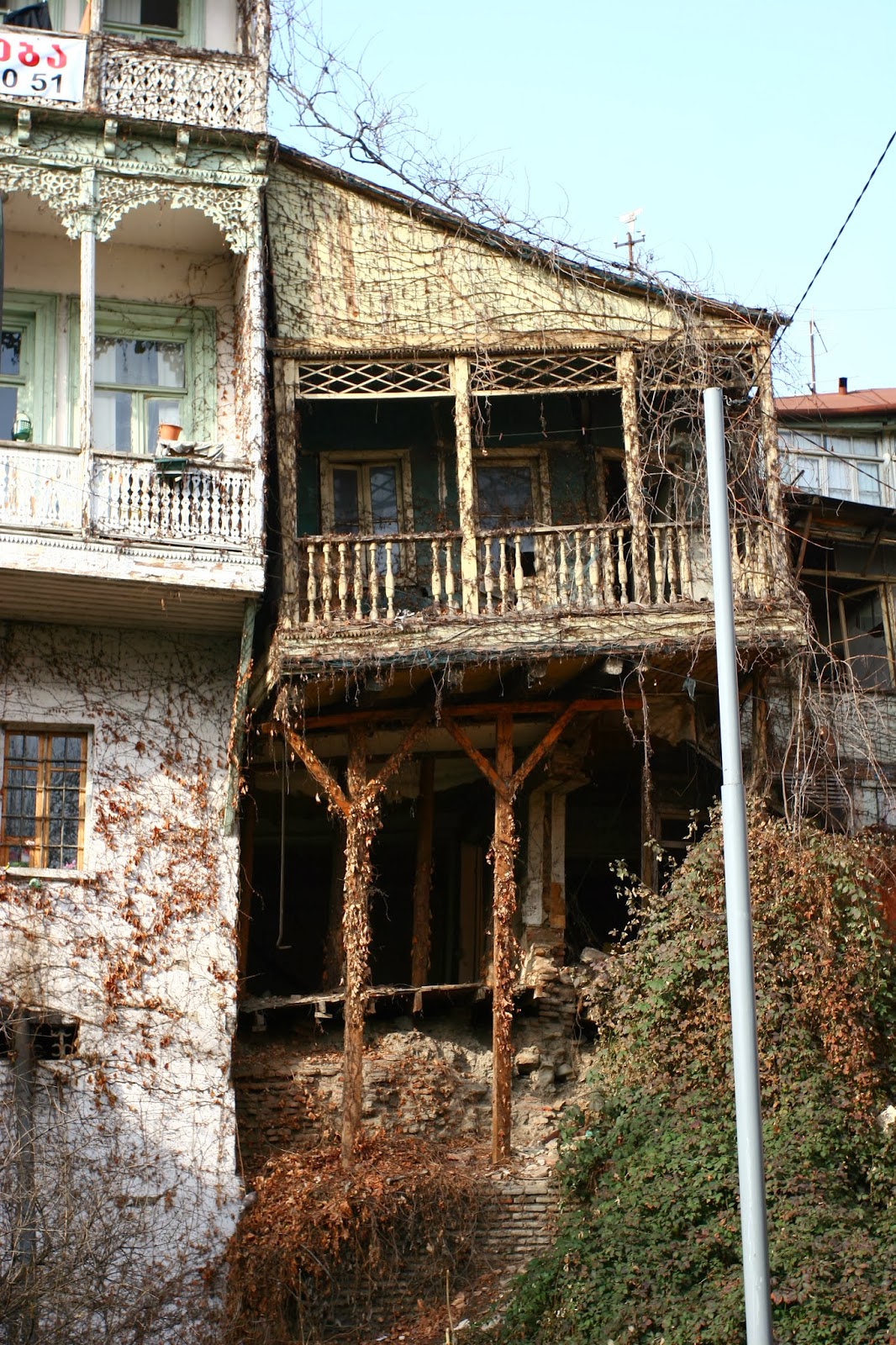 We saw lots of people fishing in the river. Some where on ledges at the base of this cliff, we just couldn't figure out how they got to that spot (I'll point the spot out in a bit). 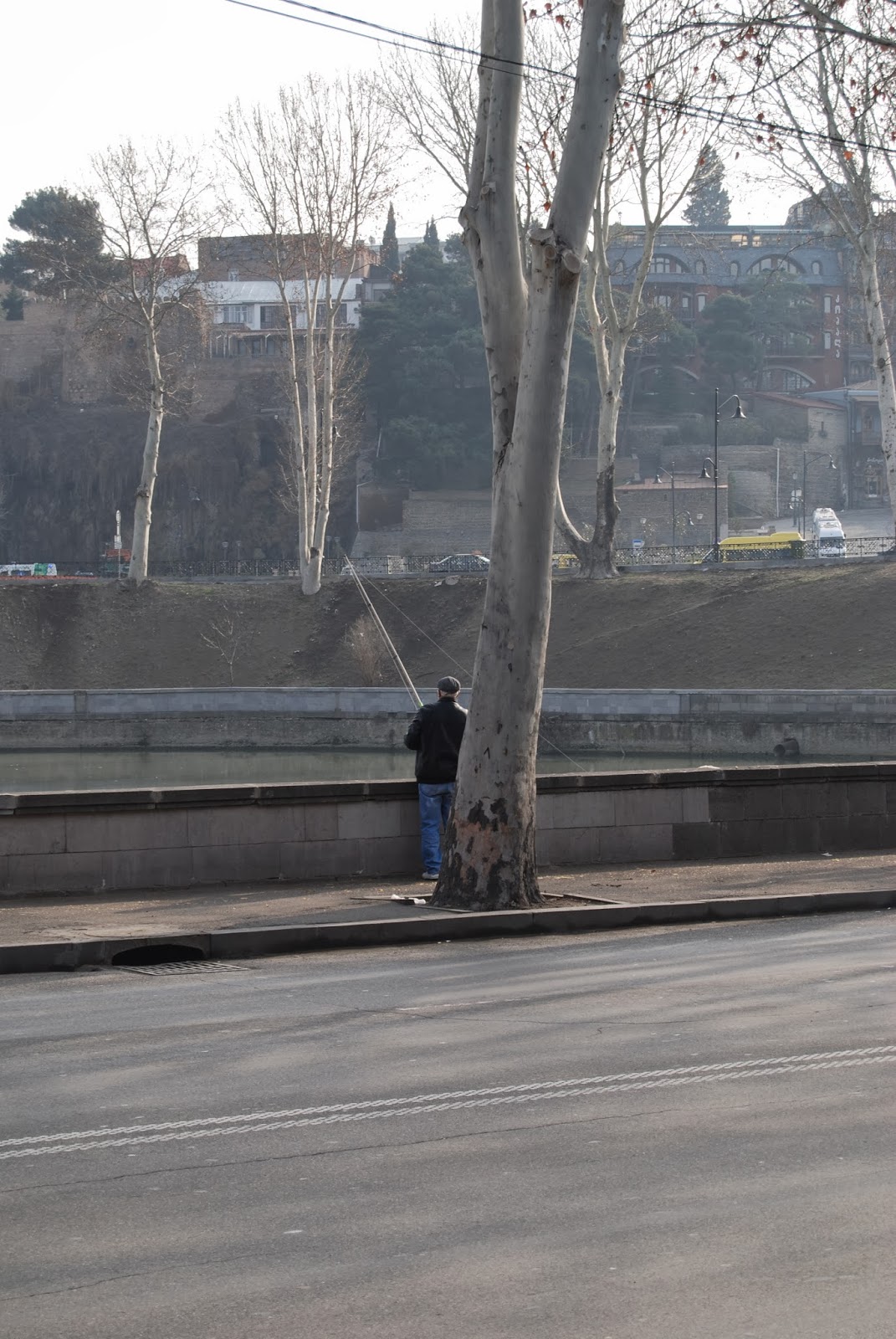 There is Metekhi Church on hill that we walked around (and eventually make it to) but here is a good silhouette of the church and monument of King Gorgasali (He is the king that discovered the sulfur springs and decided to build the city of Tbilisi here around 458 A.D.). The day was a little overcast and with the sun coming up and I think it looks pretty cool. 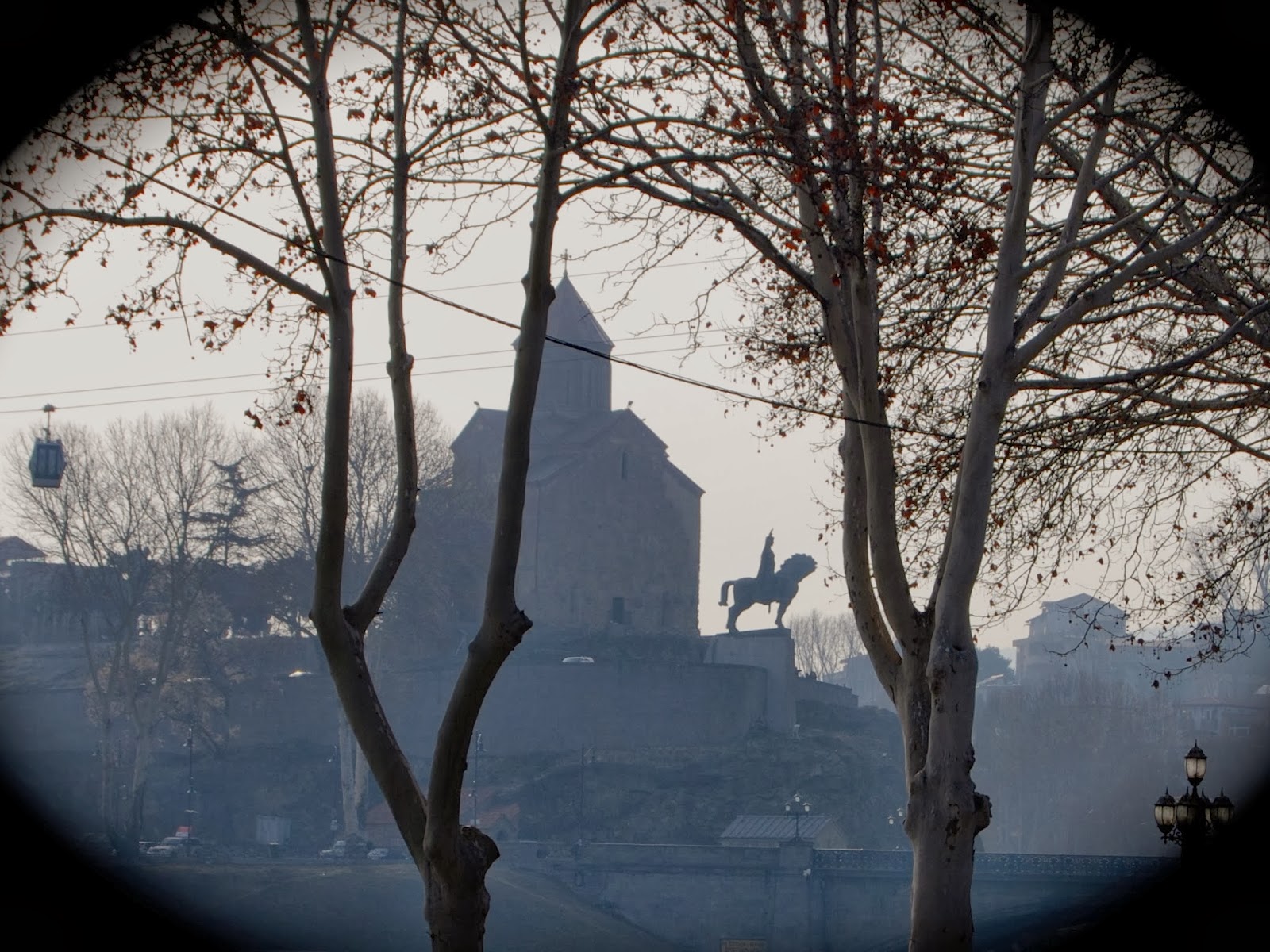 Here is another view of the Metekhi Church. I thought the cliffs were really gravity defying with the jaggedness and the buildings right on the edge. Underneath the tree (you can't see them), is the spot where I mentioned above people were fishing from....no clue how they got there! 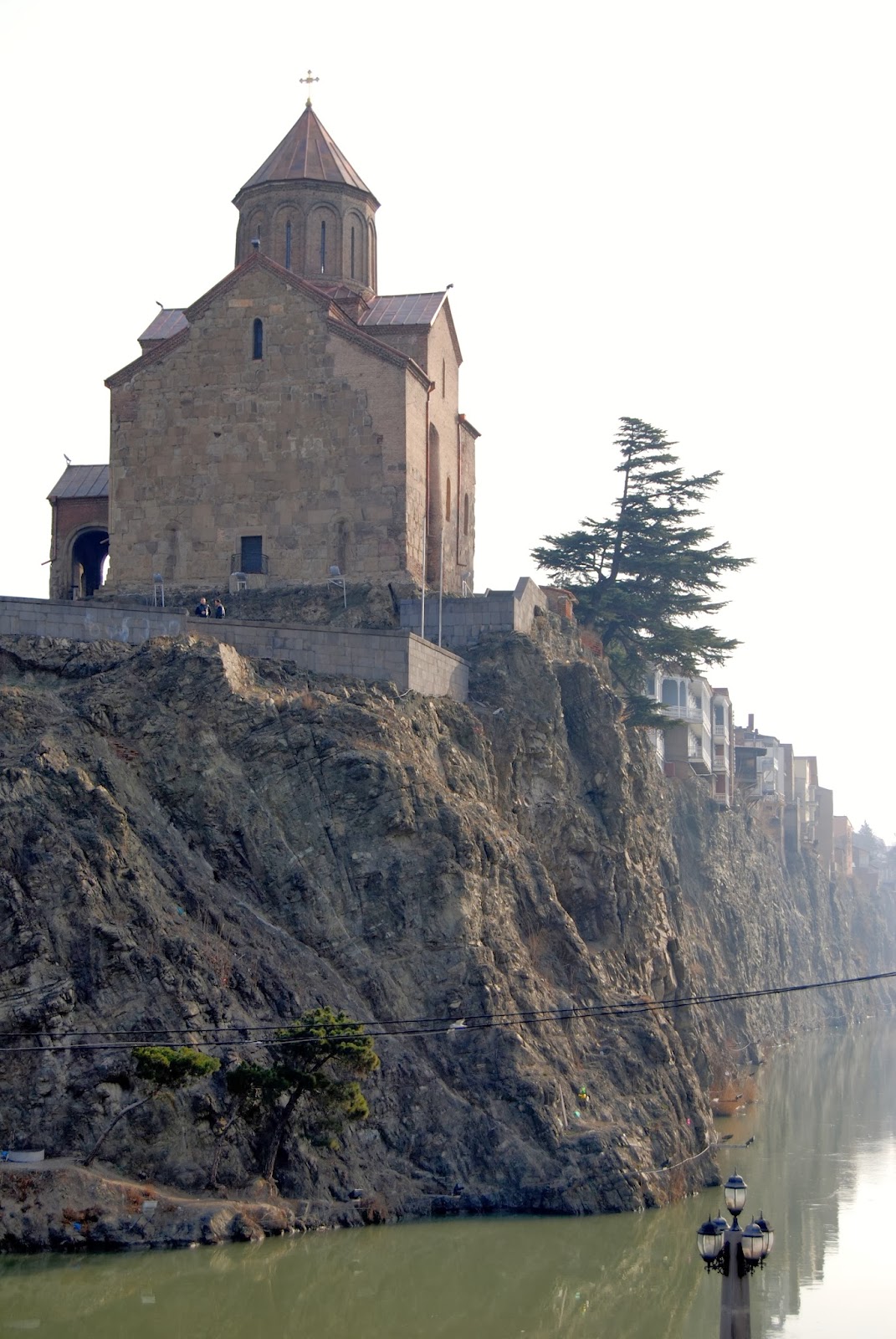 So we meandered over towards the bath houses that I talked about a few weeks ago. In this area there is a statue of King Gorgasali's falcon with the pheasant that they had hunted. The legend is that when the king found his falcon and the pheasant, they had both fallen into the hot springs and were boiled! 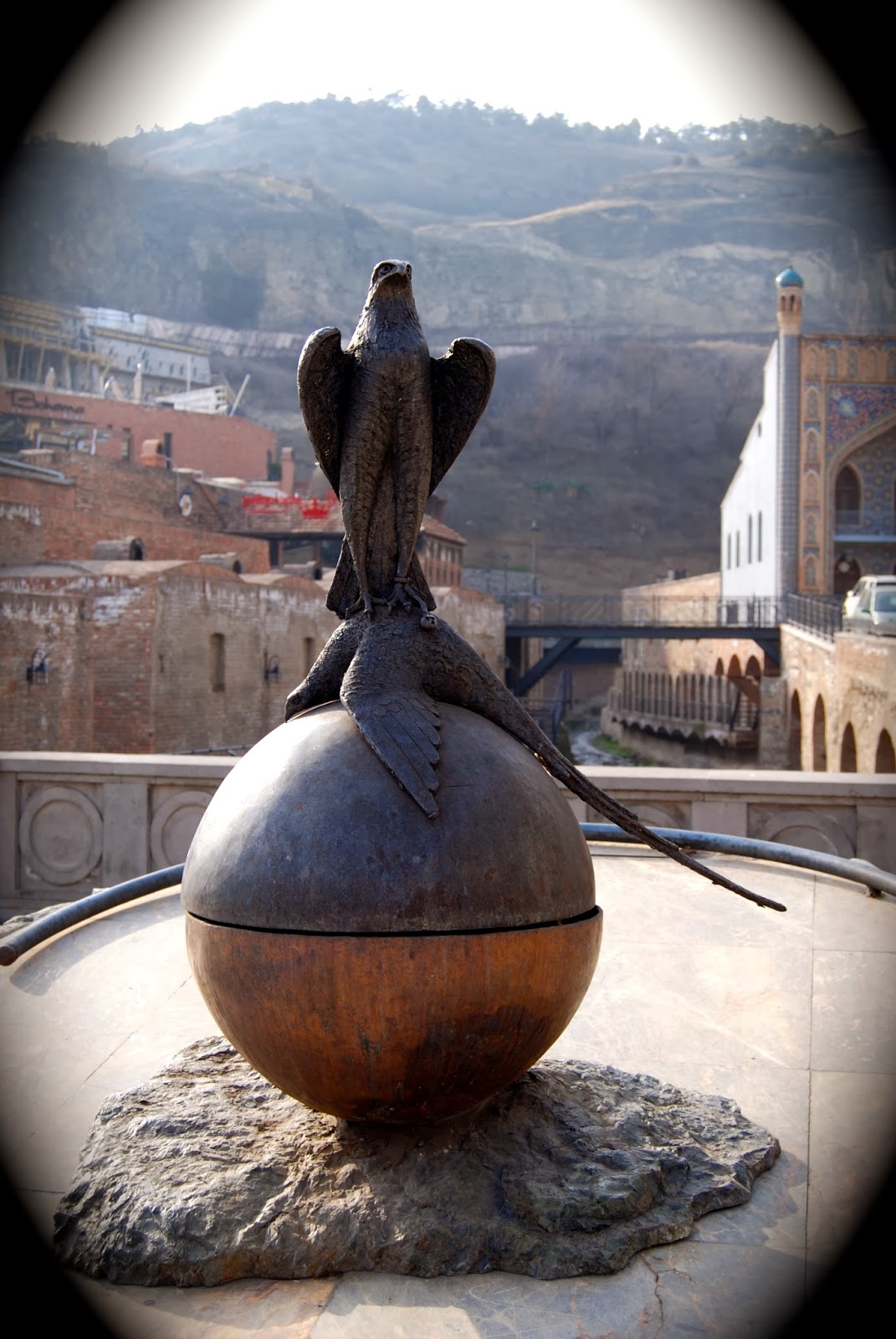 So behind that statue is a metal bridge. We walked across the bridge and there was a trail along this little creek, so we walked down the trail. We first came across this stone bridge. 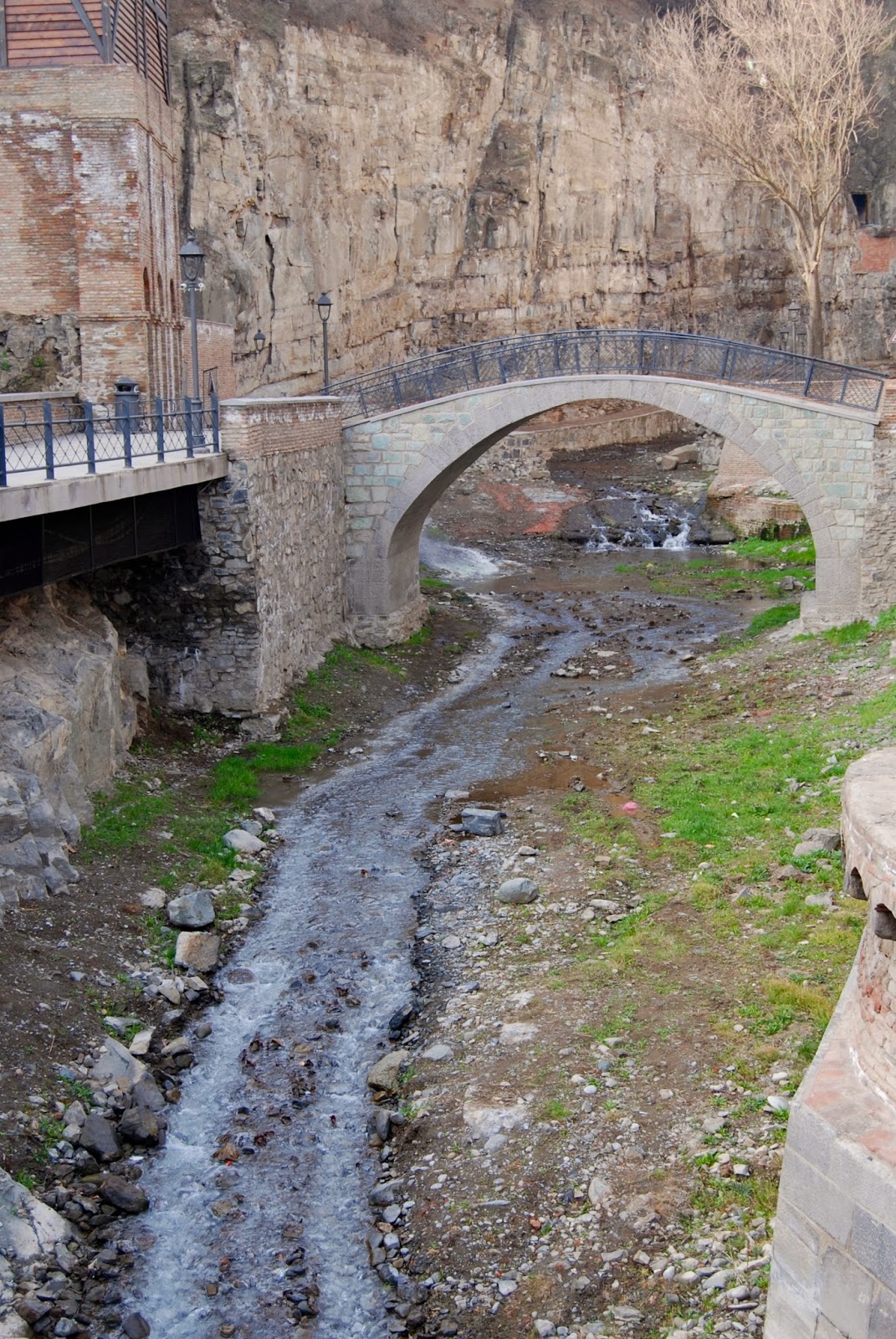 The science dork in me is real interested in what the chemical composition of these rocks are. On our street I will come across pebbles that have cracked open and the outside will be dull gray but on the inside there are varying shades of blue/green. Just like on this bridge. If I would have to guess, I would think there is some copper based compound present in the rocks (the color is similar to patina (think the Statue of Liberty)...oxidized copper). I am not a geologist in any manner and rocks make react/present colors differently than pure compounds do in a chemistry lab.... 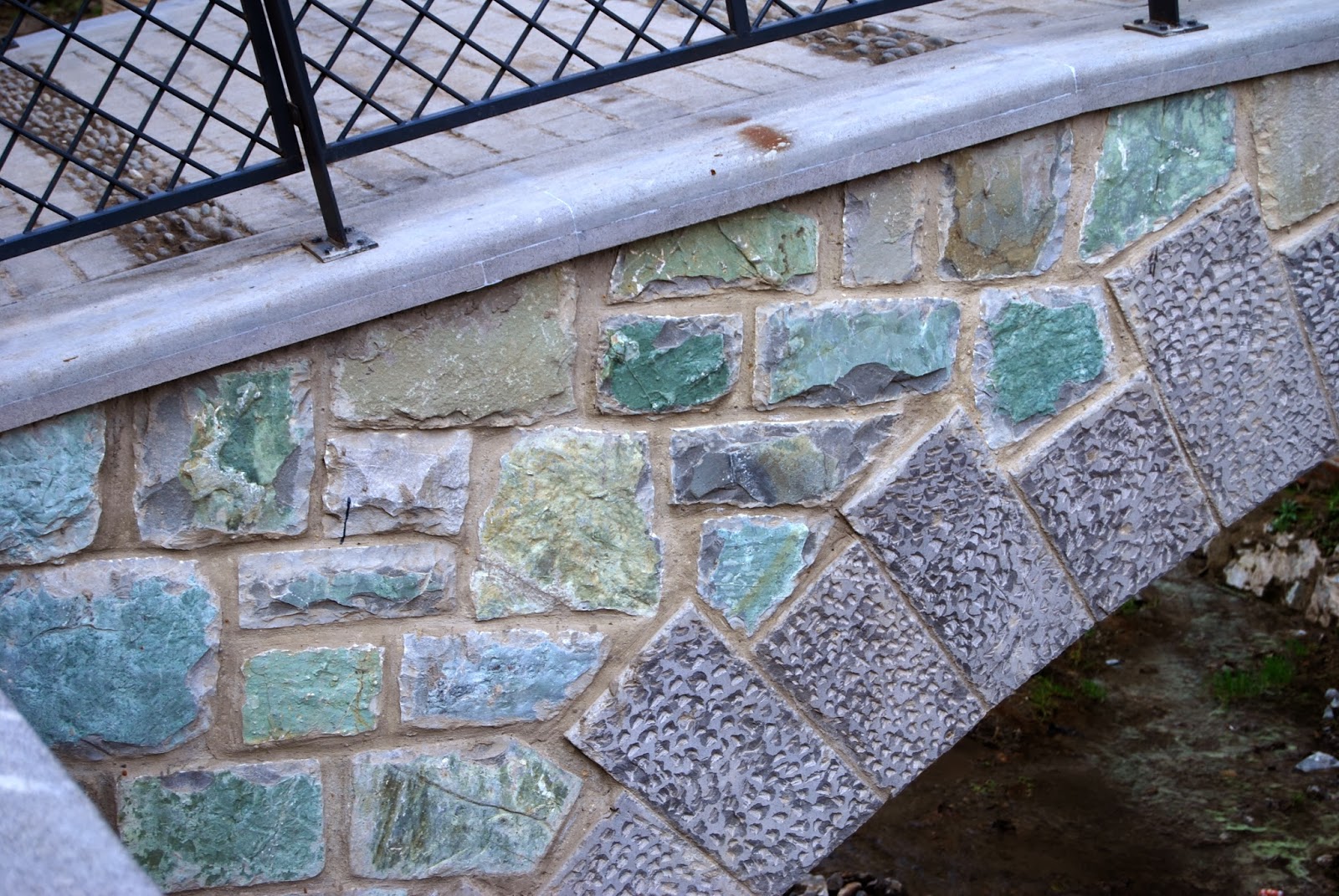 So we kept walking down the path. After passing this rock bridge, we notice how much older the bricks making up the path were....kind of neat to be walking where people have walked for over a thousand years...when we got to the end of the path we found a waterfall....right in the middle of the city....I always visualize waterfalls out in very remote areas.... 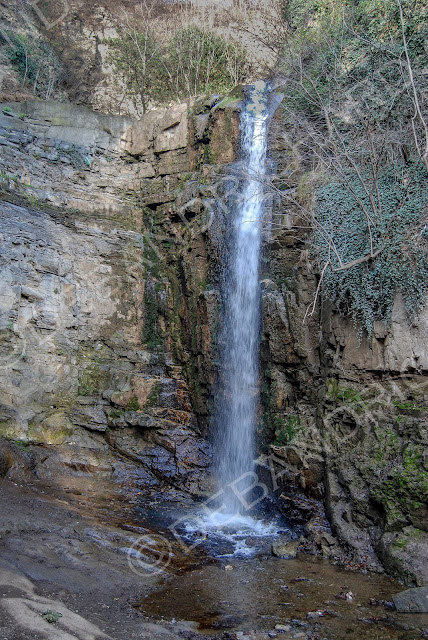 Me and my exploring buddy (aka the hubby) taking a selfie (we-sie?) 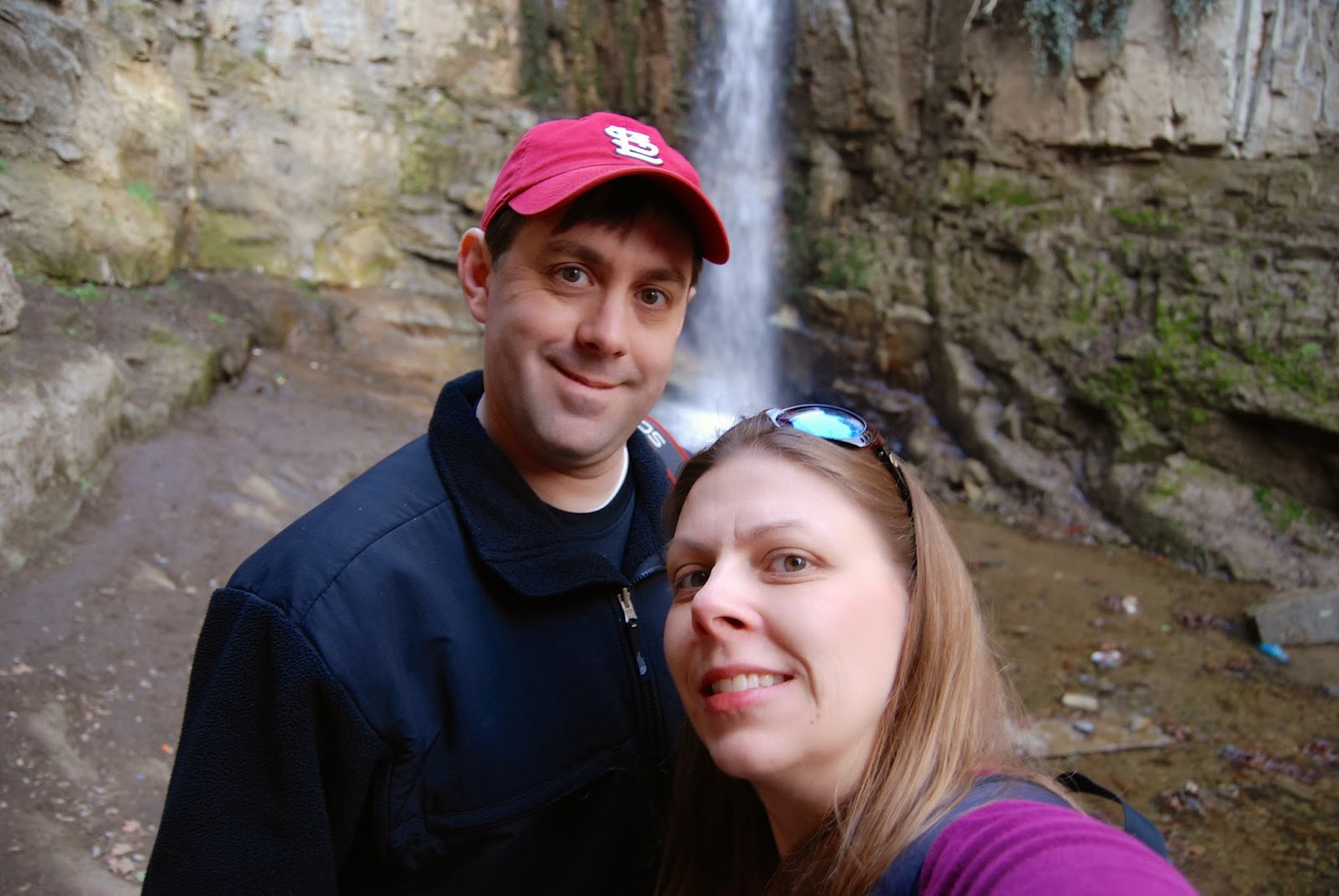 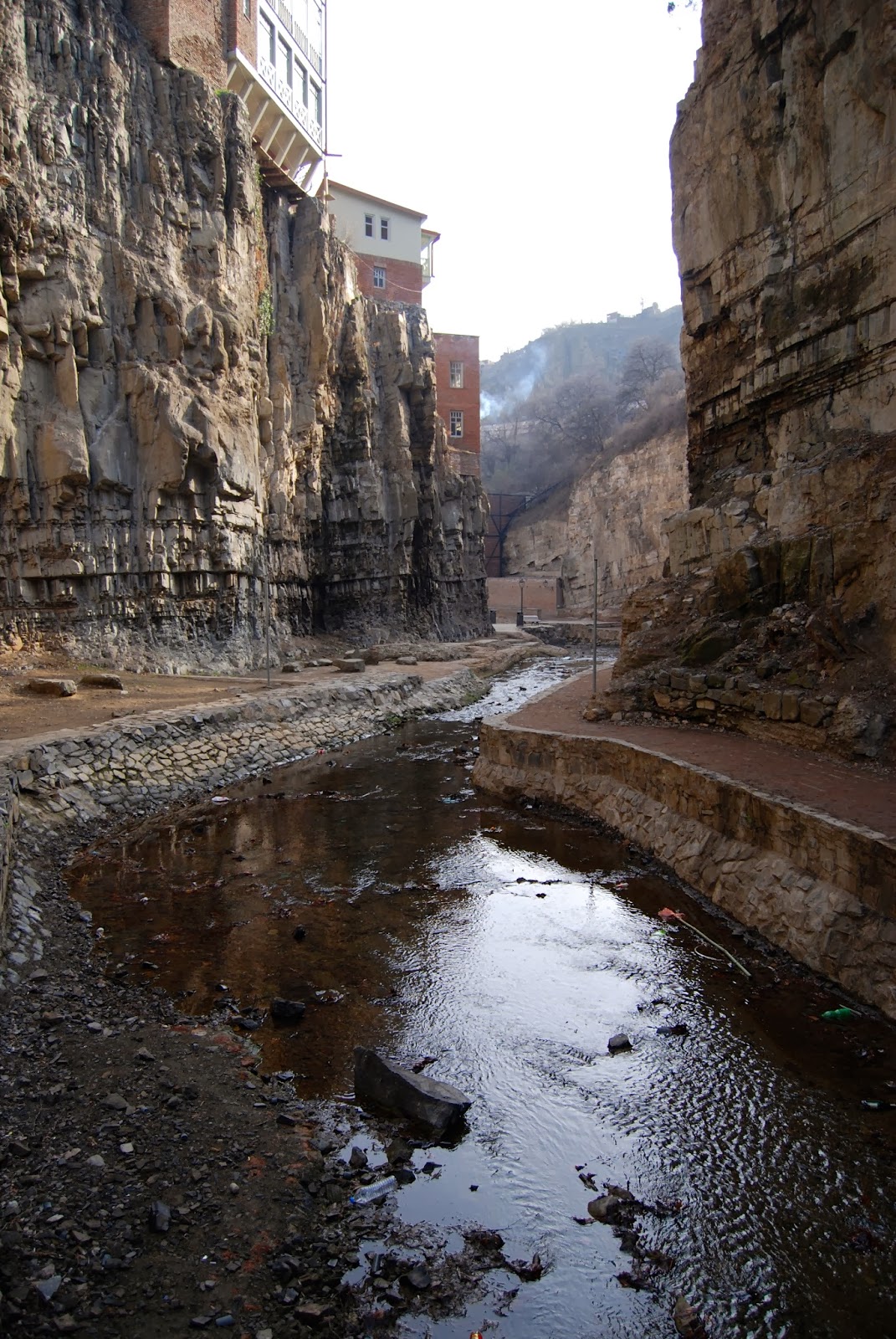 On our way out, I turned back and saw the big opening in the middle of the wall. It looks reinforced to some degree....but I wonder how you get there.....does it come from all the way at the top of the cliff? What's inside, tunnels? rooms? 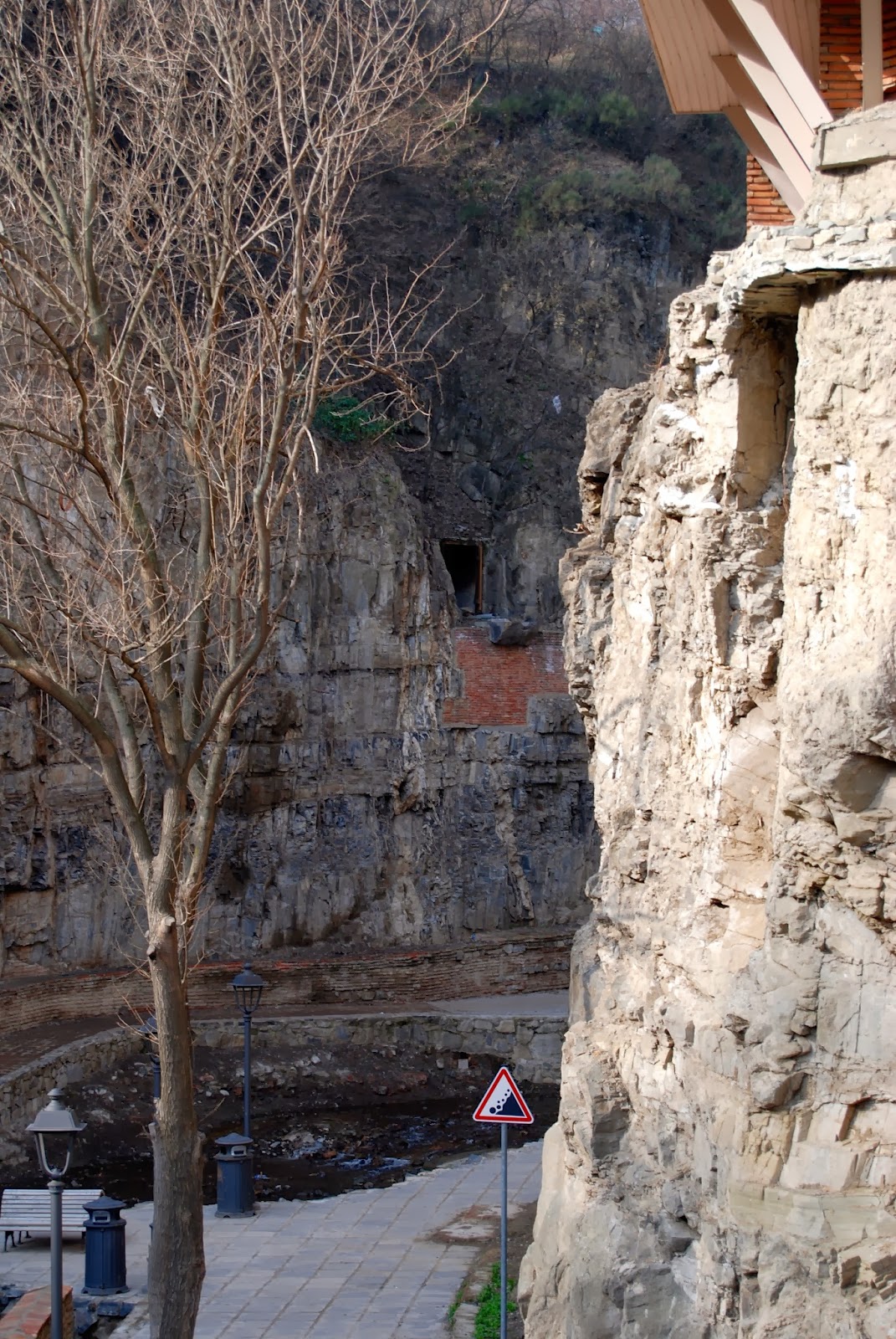 So we found the entrance to another sulfur bath. This one is called Bath House No. 5.....the sign at the entrance is in Georgian (I think) and Russian.....from the soviet era....pretty neat, but likely a sore subject with the locals. The previous Georgian President worked hard to remove all remnants of that time in history, but with this being part of the brick wall it is a little more difficult. 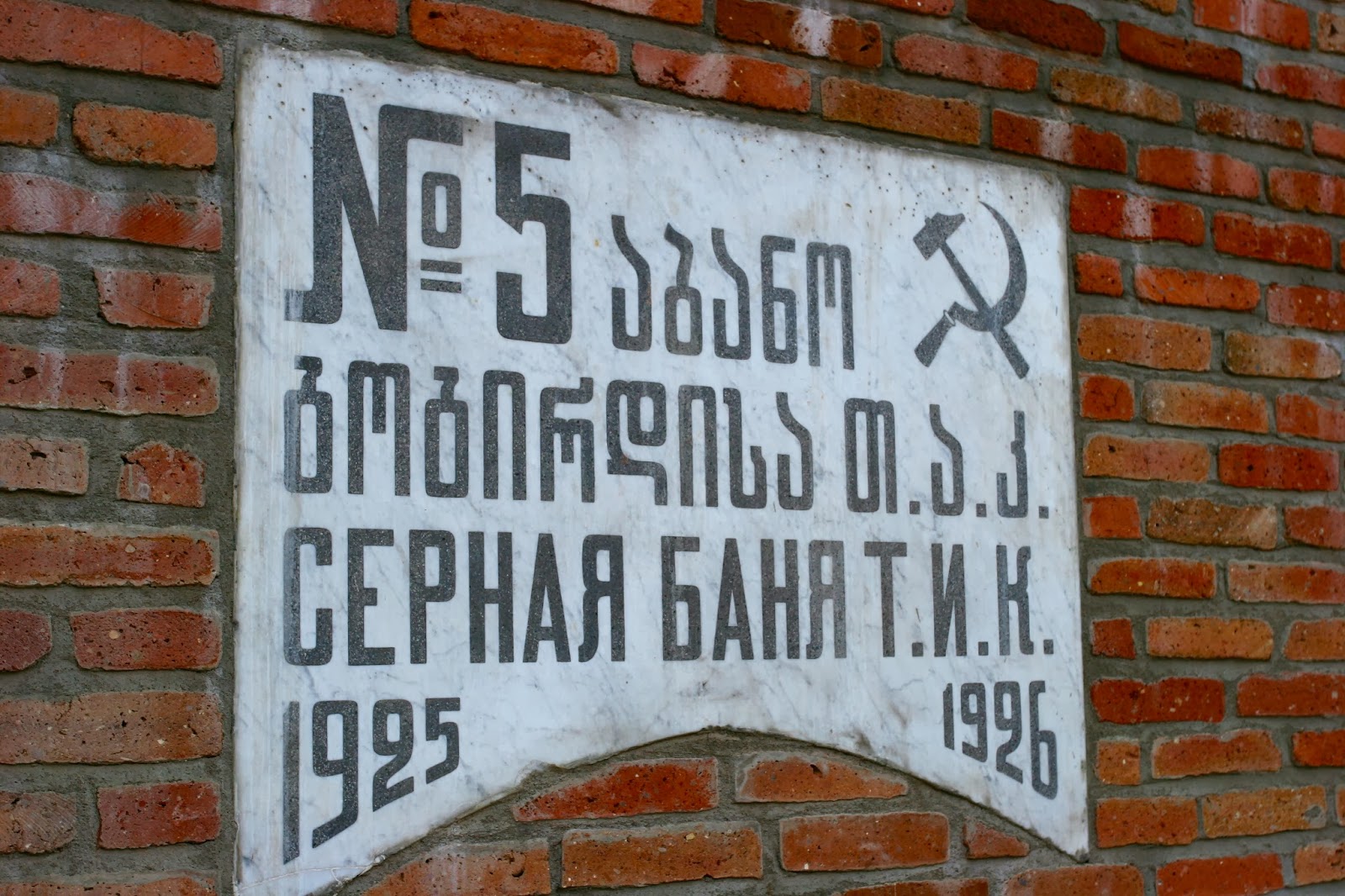 So we headed back across the river to the Metekhi Church. When we first started walking up the hill, there was an entrance that took us down along the water. There were a number of praying stations (I can't think of a better word). Most had pretty mosaics and looked as if church goers had brought small offerings (flowers, herbs, etc). This was the prettiest and sparkliest mosaic. I think it is Saint Abo. 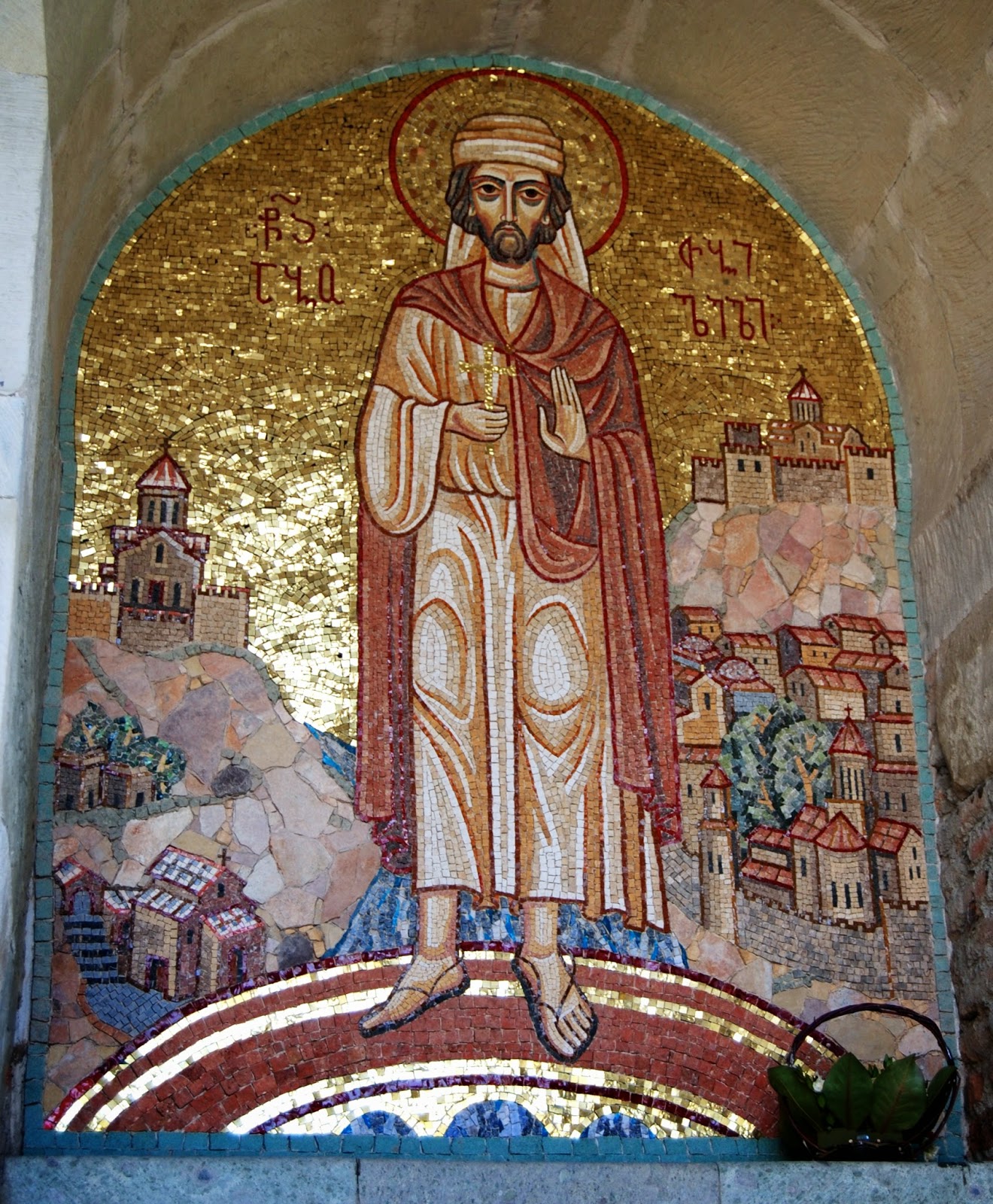 The key hole pattern was also used a lot down along the water, I do not know its significance though (and this looks a lot newer than a lot of other structures associated with the church). 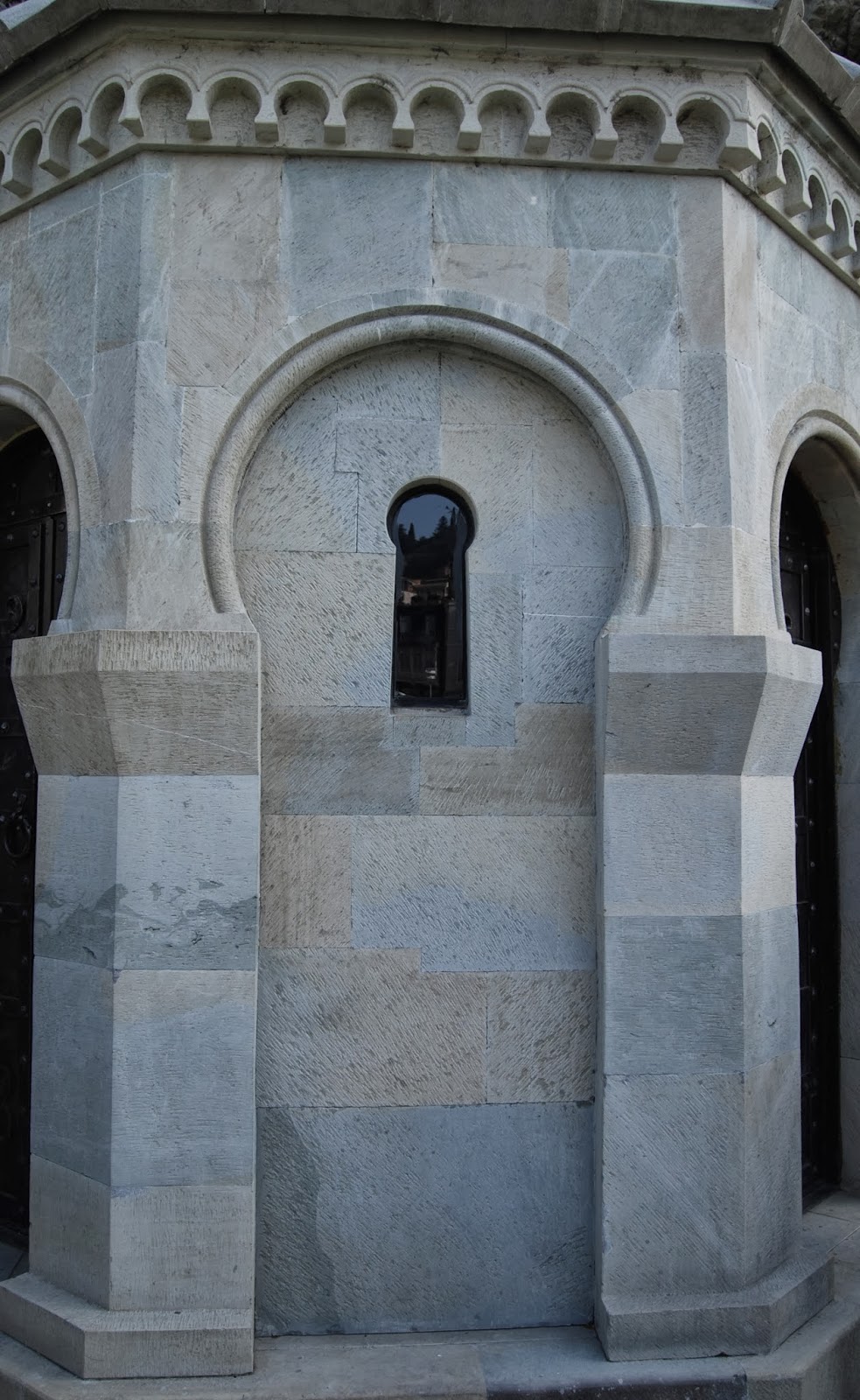 We then hiked up to the top of the hill, passing this shop along the way....I think they may be on to something, not sure if you could get a license for this type of shop in the US but they could totally sell more trinkets you never knew you needed if they threw wine into the mix...lol. 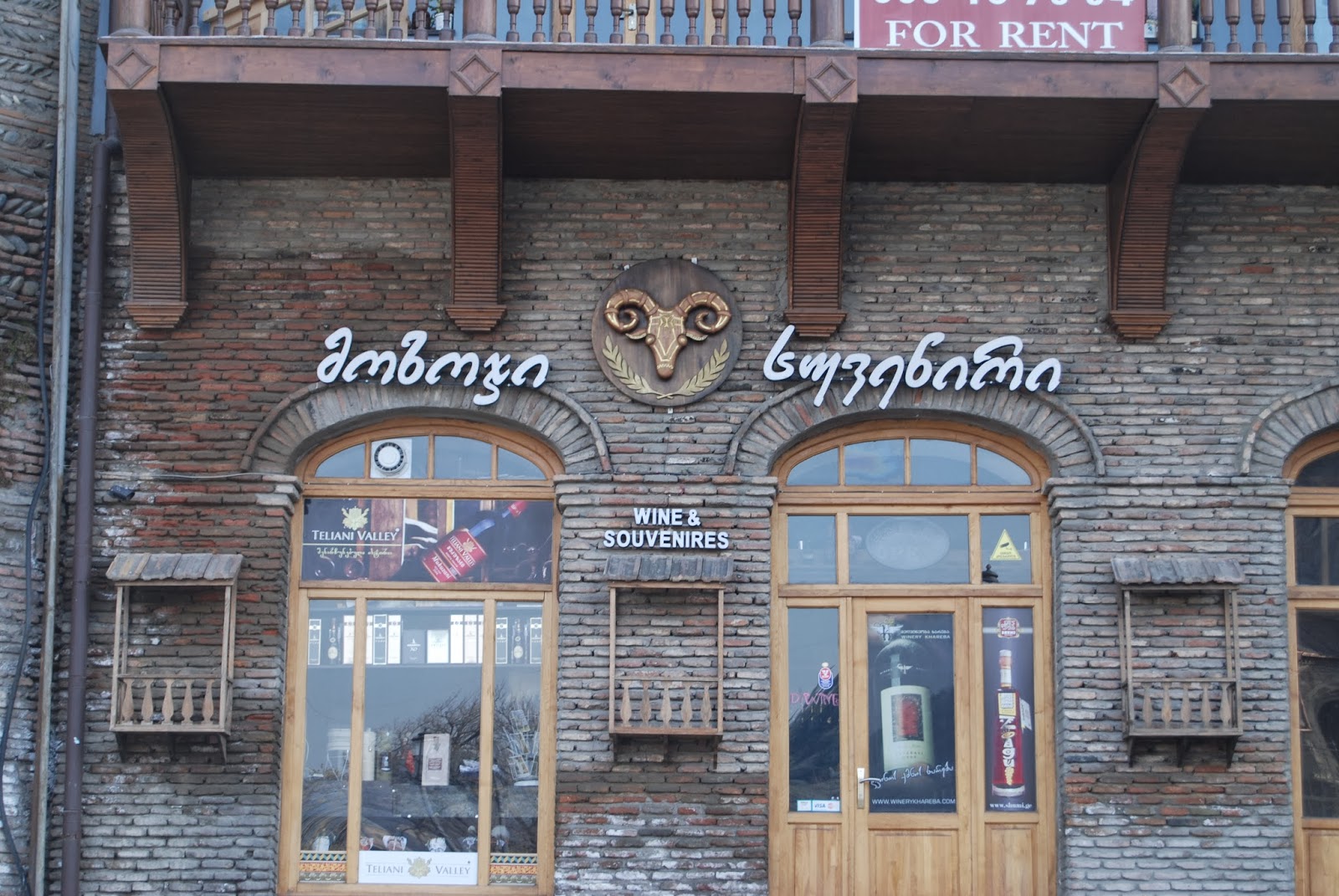 There was a service going on in the church, so we did not enter (and I really need to start carrying a scarf when we go sightseeing, I don't want to be disrespectful if we do enter a church). While we were up there a monk/priest came out and rang a set of three bells (due to the sun's angle we didn't get any decent photos of the bells). I think the weathered, mossy, abandoned stairs are pretty cool......I unintentionally photo bomb Richard.....lol 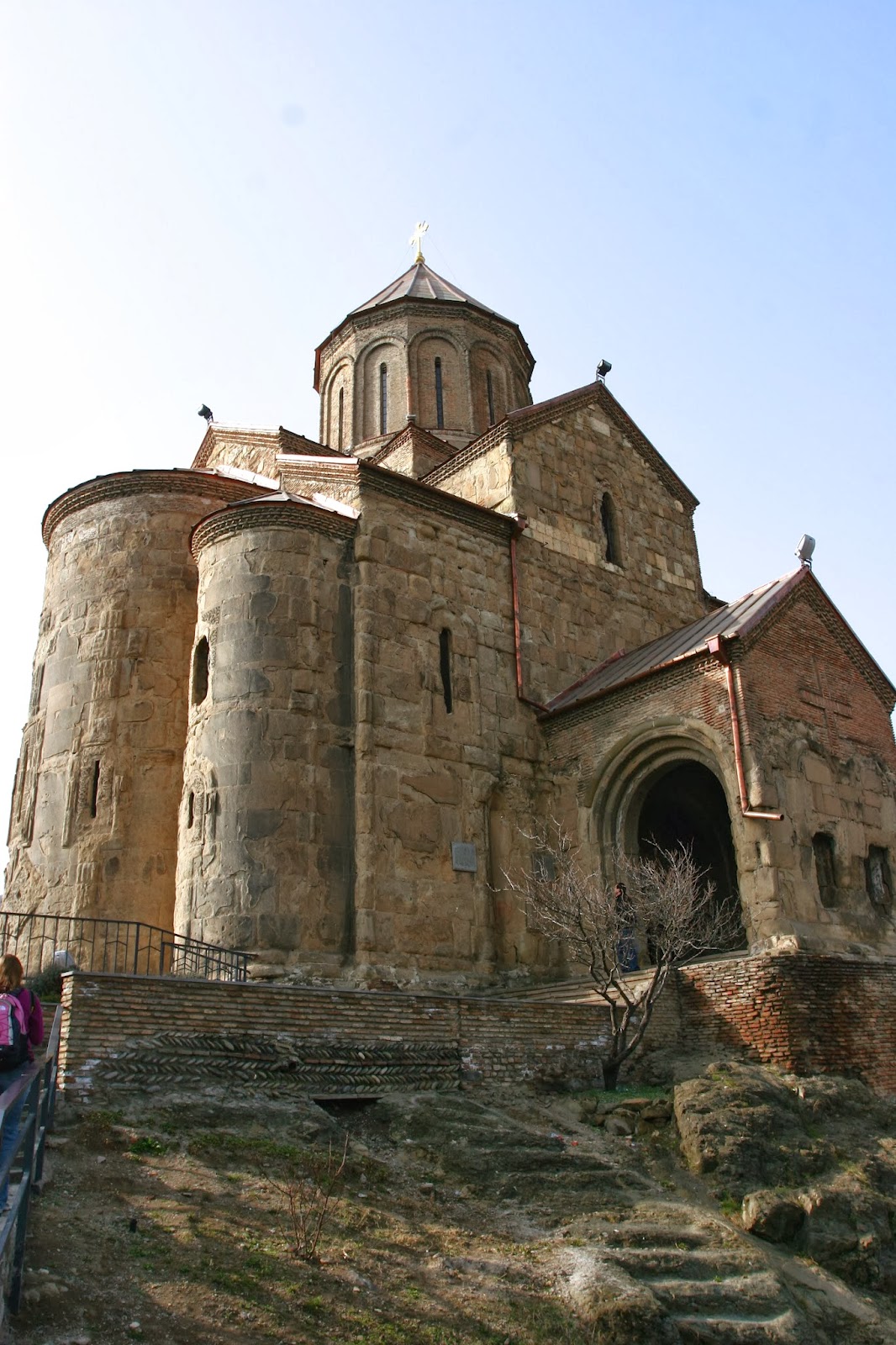 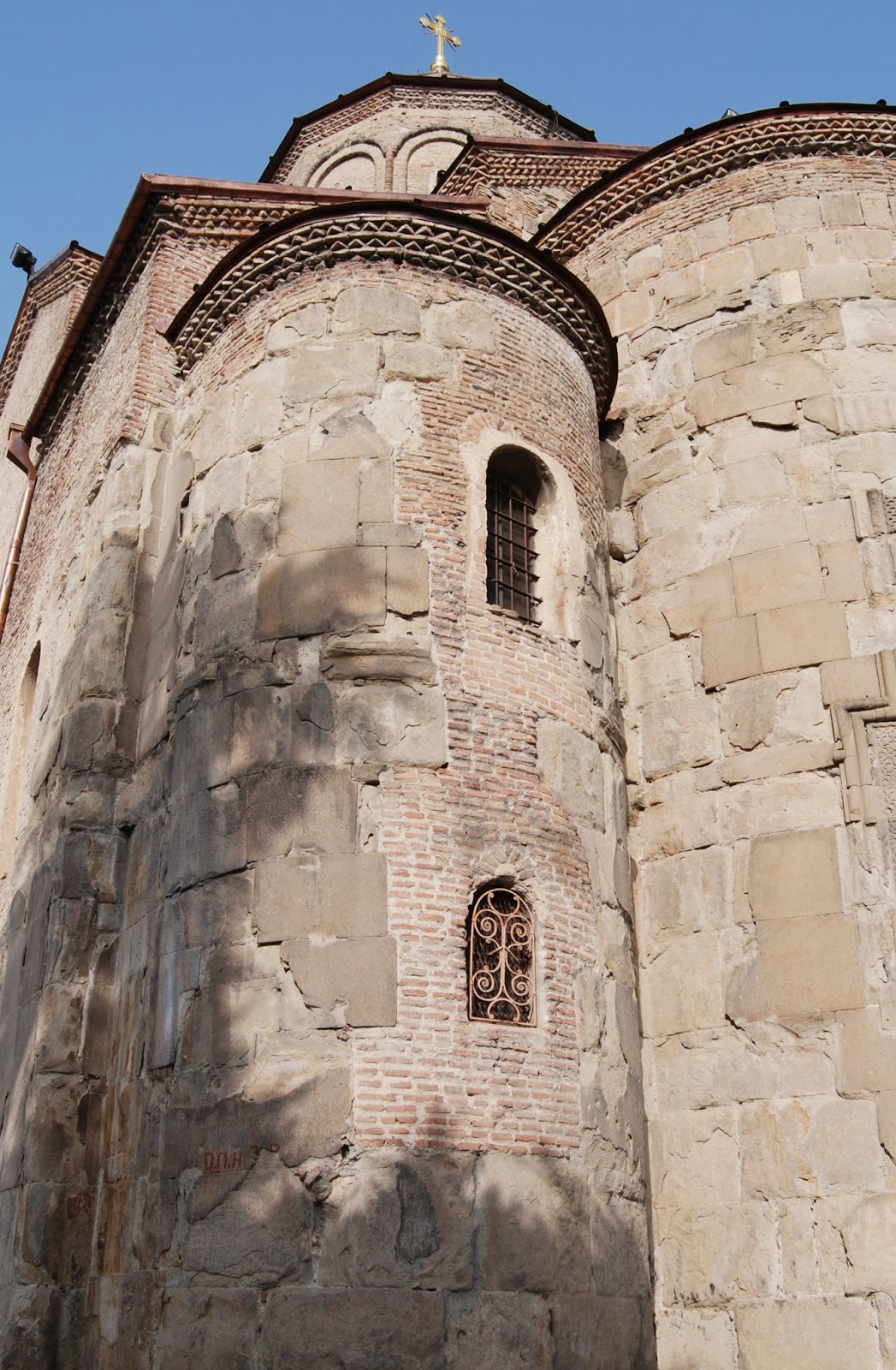 View of the older portion of downtown Tbilisi. The sulfur baths are to the left of this picture. You can see Mother Georgia up on the hill to the left as well (I'll blog about her after we go on another adventure and check her out). You can take the ski-lift like thing to ride over the Old City and up to a fortress, as well as Mother Georgia, that overlooks this city. We plan to take the kiddos on that adventure. The yellow buses are the public transportation. Most of them are the large van variety....the pretty much have the right of way on the road and you have to watch out for them when you are driving.... 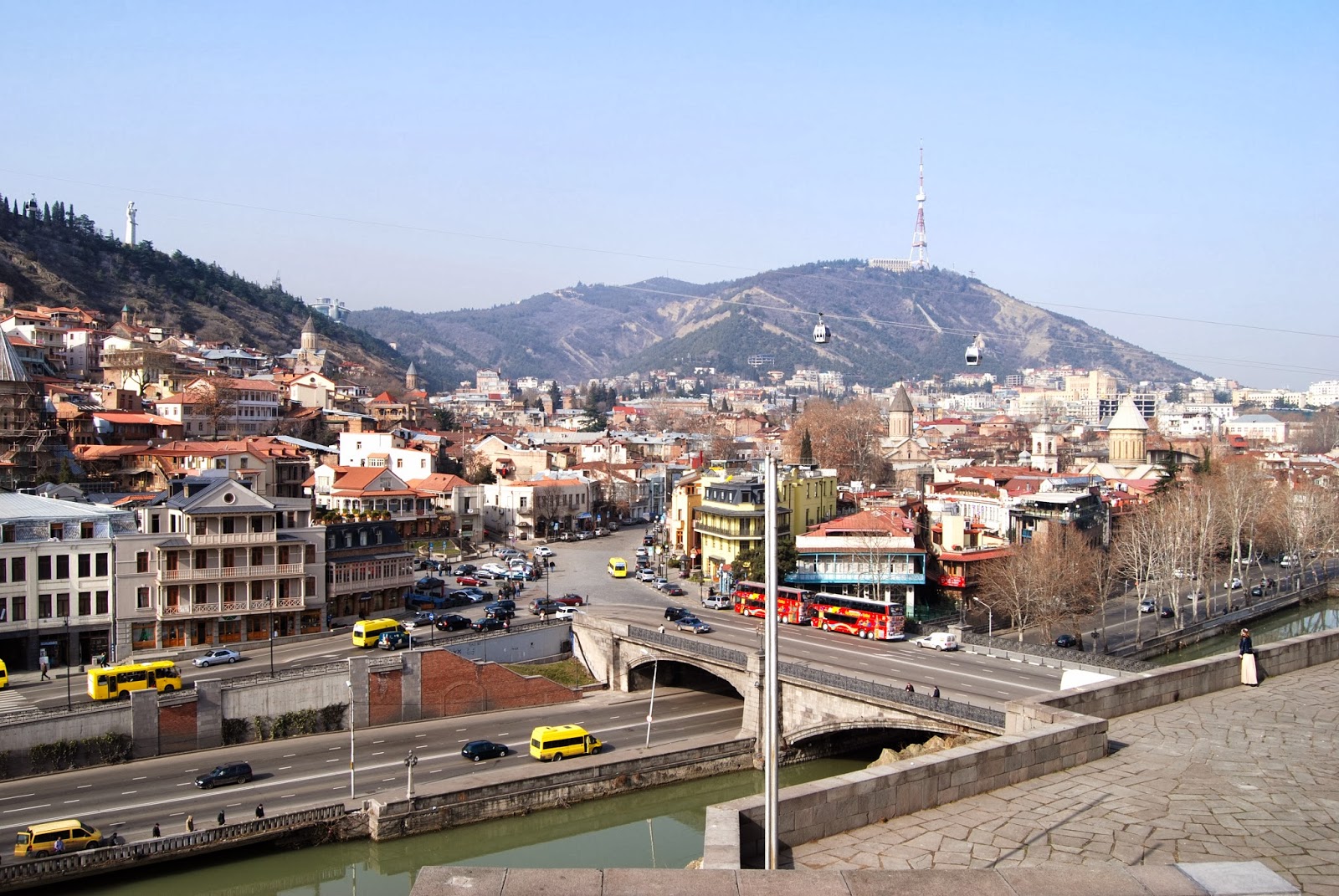 As we were leaving the Metekhi Church, we walked down some stairs....I noticed that there was no railing.....somewhat refreshing...I feel the US has so much safety stuff that at times it takes away from the beauty/history of what you are visiting with a big metal railing. 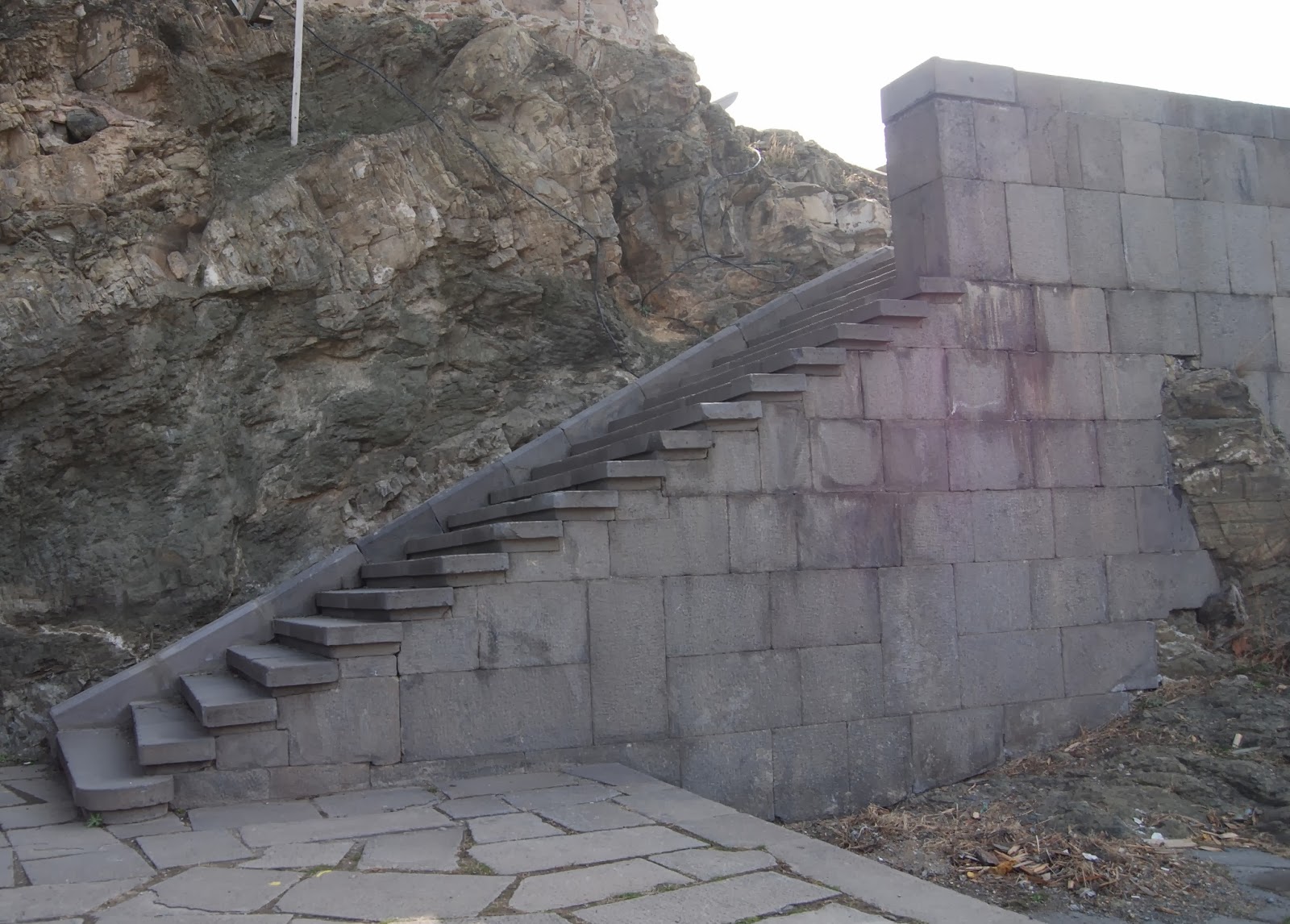 So that was our little adventure around part of Old Tbilisi. Given I wasn't feeling to great (I know the locals must have loved my multiple coughing fits....ugh!) we headed back to the parking garage....which I found it a tad peculiar that the parking garage offers wifi..... 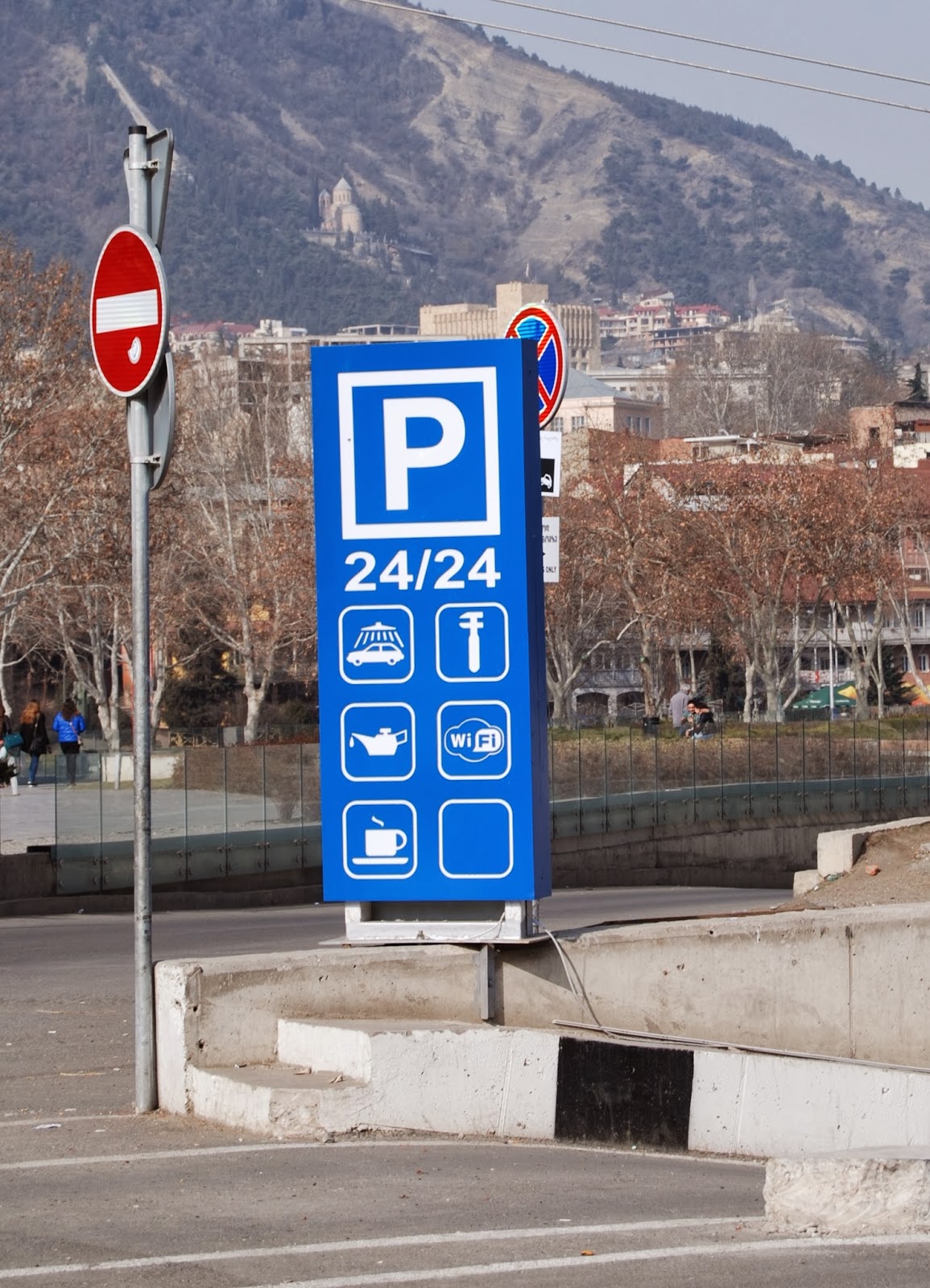