Mother of Georgia and Narikala Fortress

So Saturday the weather was beautiful! So we took the kids on an adventure....can you tell they were excited? 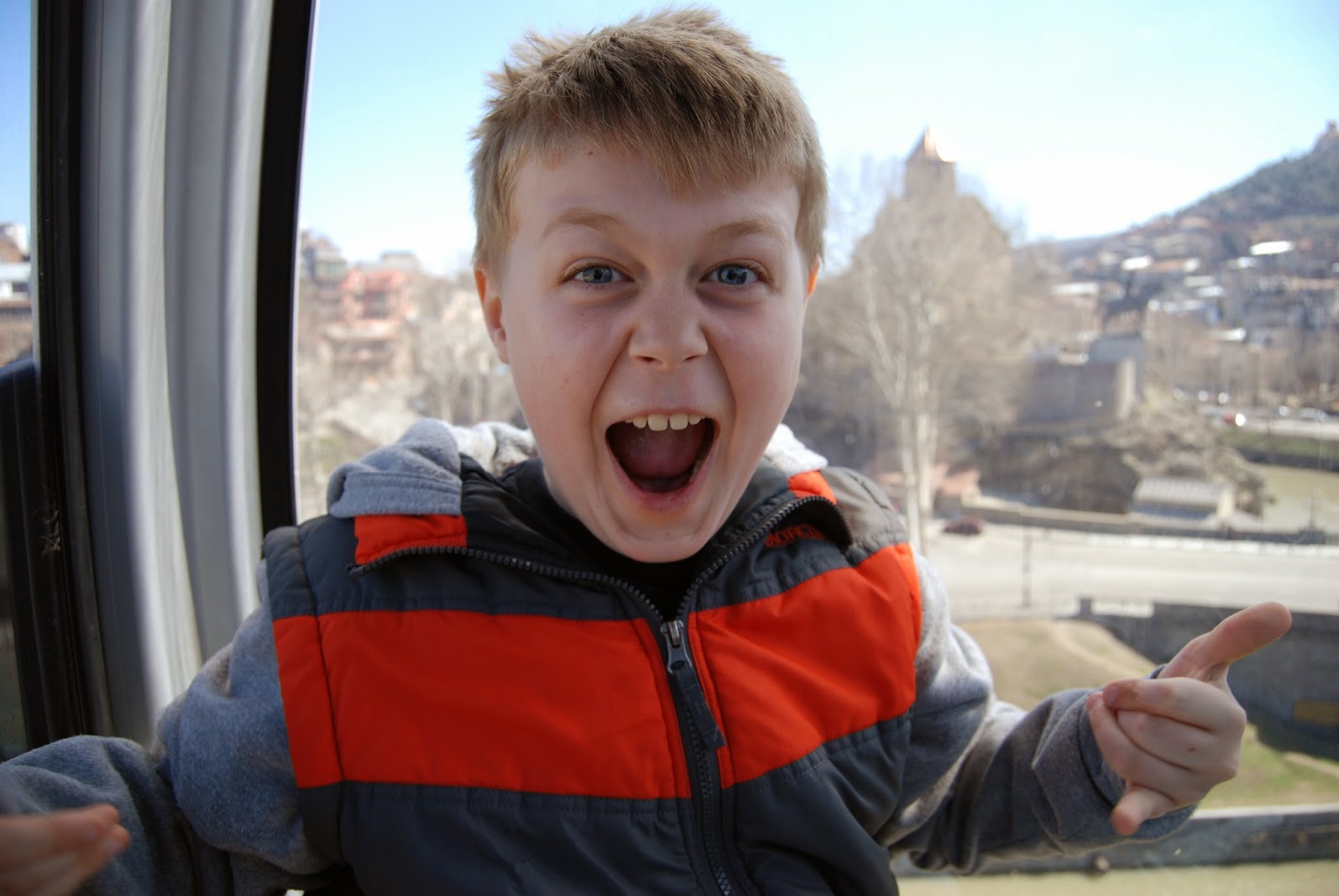 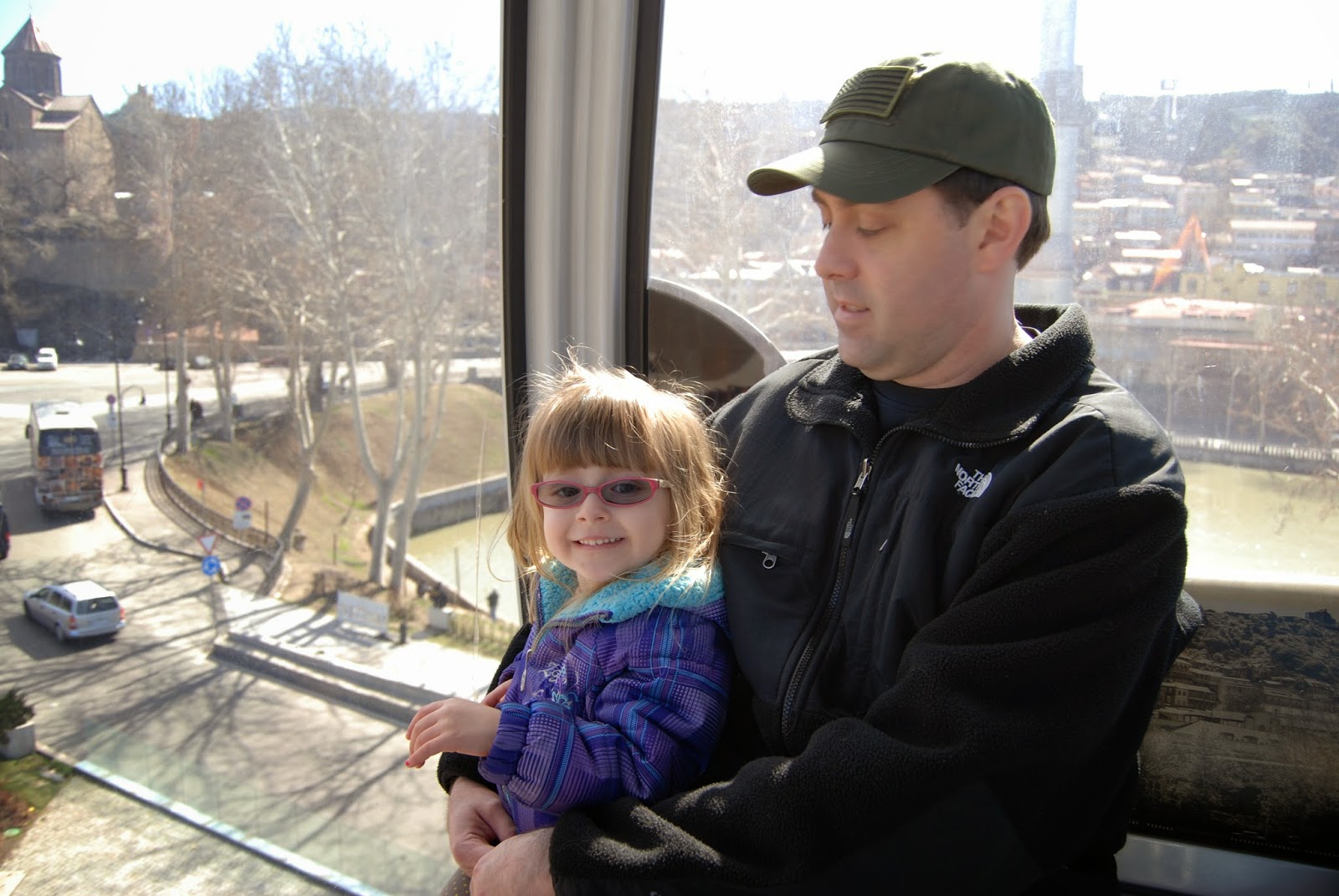 We were flying over the Mtkvari River and Old Tbilisi up to the peak of the Sololaki Range in an air tram (it cost about 1 Lari a person each way.....so about $1.20 roundtrip). This peak can be seen from any given point in Old Tbilisi. So it made the perfect spot to build a fortress. 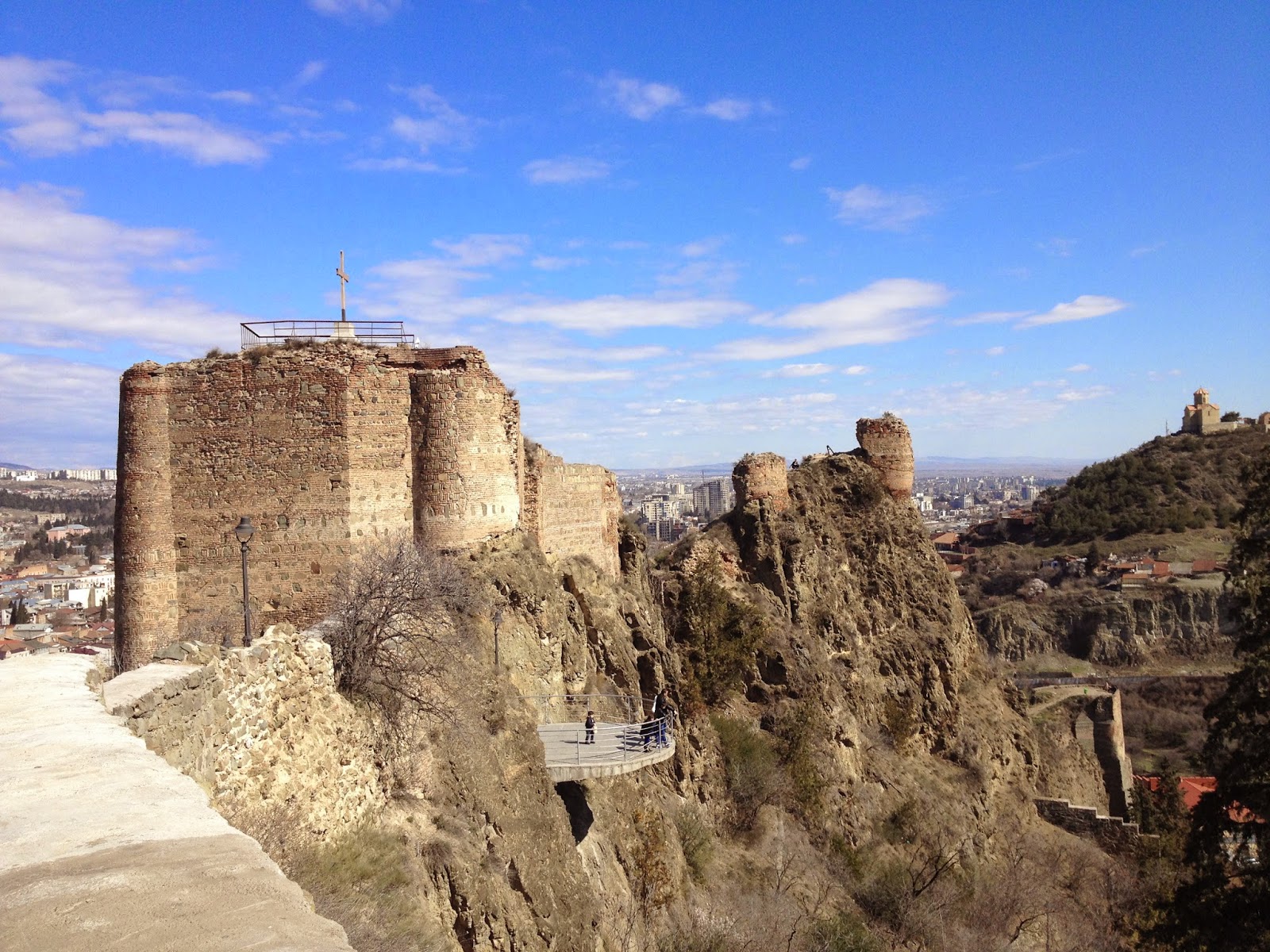 When we got off the tram we walked towards the statue of Mother of Georgia. She is a 65 foot statue that symbolizes the nation's spirit. She holds a bowl of wine in her left hand and sword in the right hand. Georgians are very friendly to guests and have found the best defense is to drink/toast outsiders until everyone is friends. The sword is a warning to enemies. I feel it's a little like keep your friends close and your enemies closer (and keep those enemies drunk...lol). 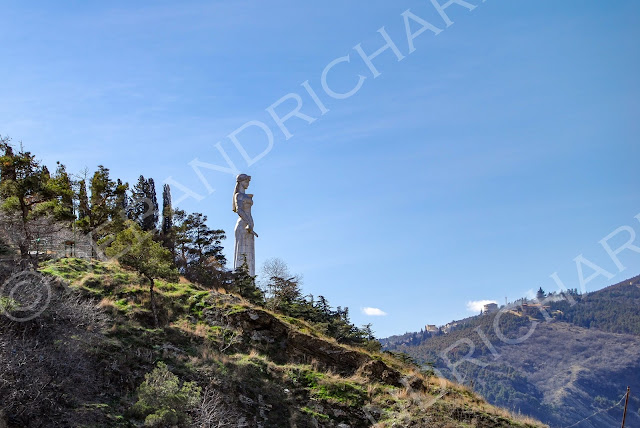 Upclose....check out the glutes on that chick! 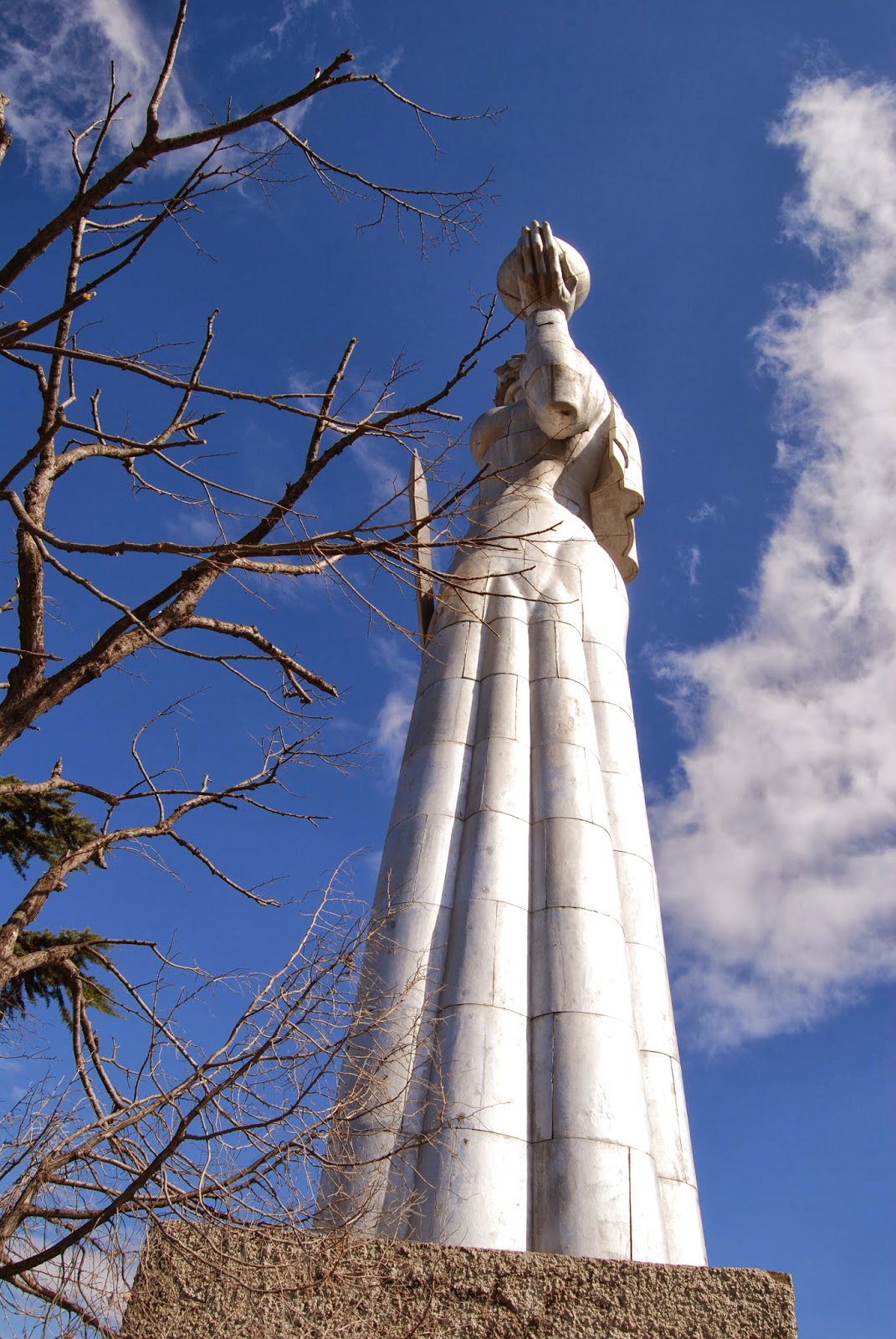 View of the city in front of Mother of Georgia. Richard got to go sightseeing up in the radio tower on the peak to the left of the photo. We live on the side of another mountain behind the one with the radio tower. One thing that really caught my eye is that all the roofs are metal, not a single asphalt shingle in sight. 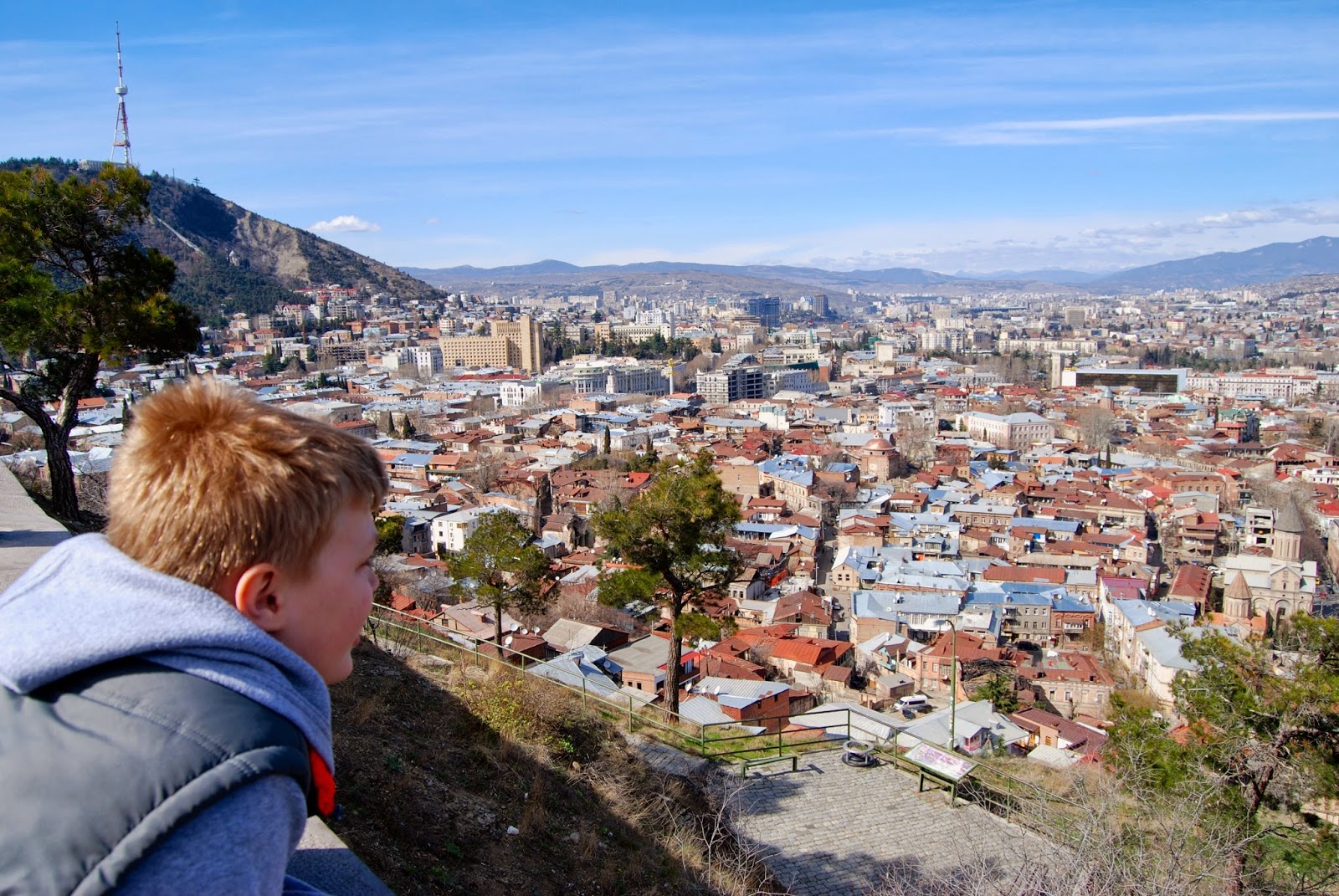 So after getting up close and personal with Mother Georgia, we headed over to the Narikala Fortress. Along the pathway there were a variety of vendors selling paintings, souvenirs, food, there was even a carnival-esque game where you shoot a gun at a target to win a stuffed animal prize. One gentleman was carrying/selling what looked like bags of cheese doodles, while walking along the path he said something in Georgian to people he passed, when he passed us he said 'Chips'...apparently we scream Americans.... Mason was super excited to get cotton candy from one vendor....and it was only 1 Lari ($0.60)....next time I get cotton candy in the US I'm going to feel so ripped off! 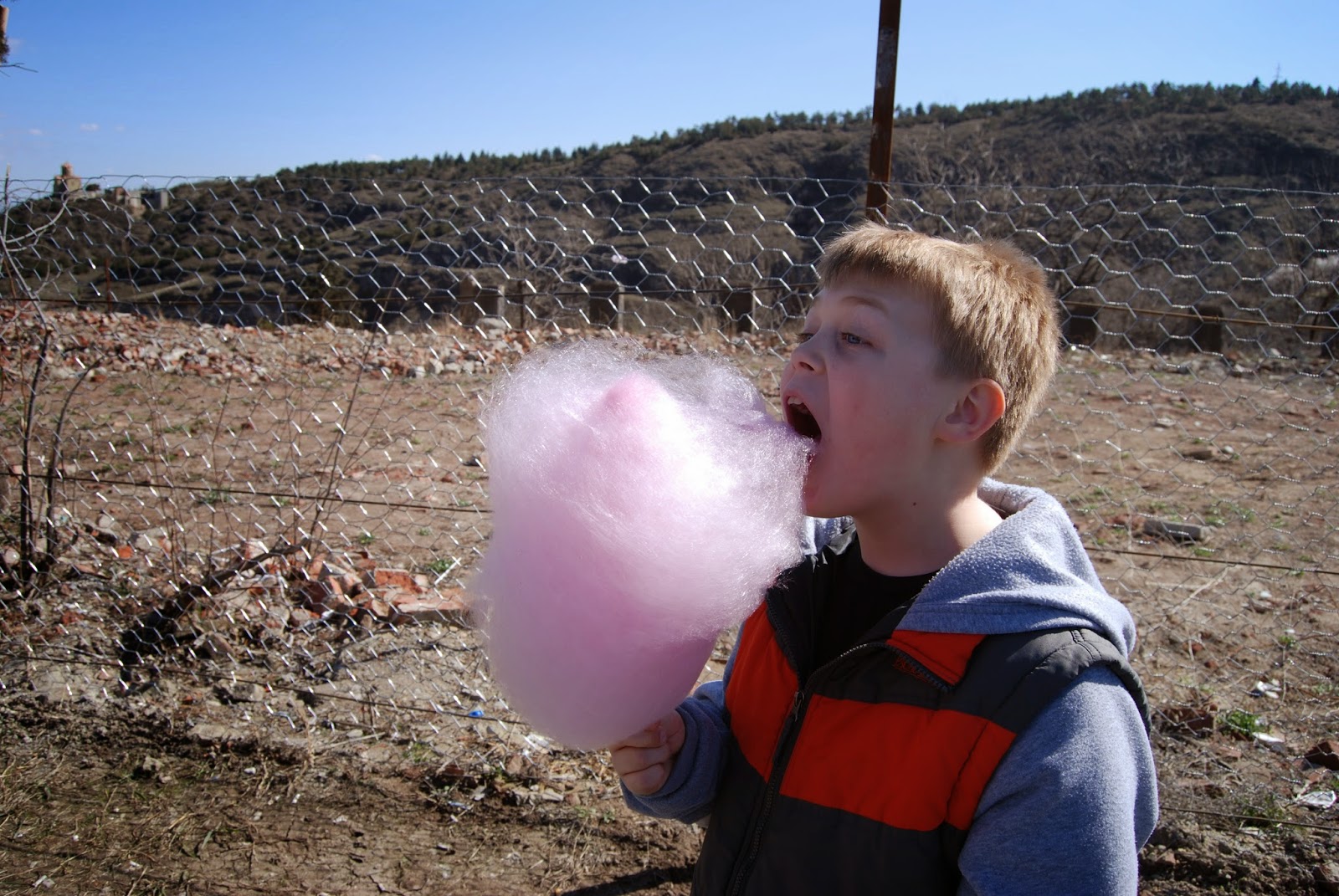 So parts of the fortress were built around 300 A.D. A majority of what you see now was built during the second half of the 16th century. There is a temple on site that was built during the 12th century. The fortress was built as a military base to control people entering the city and has been under the control of the Turks, Arabs, Mongolians to name a few. It has been also used a residence of rulers/conquerors, an observatory, and a prison. To keep her attention, we told Clarissa is was a princess castle....which parts of it looks like one! 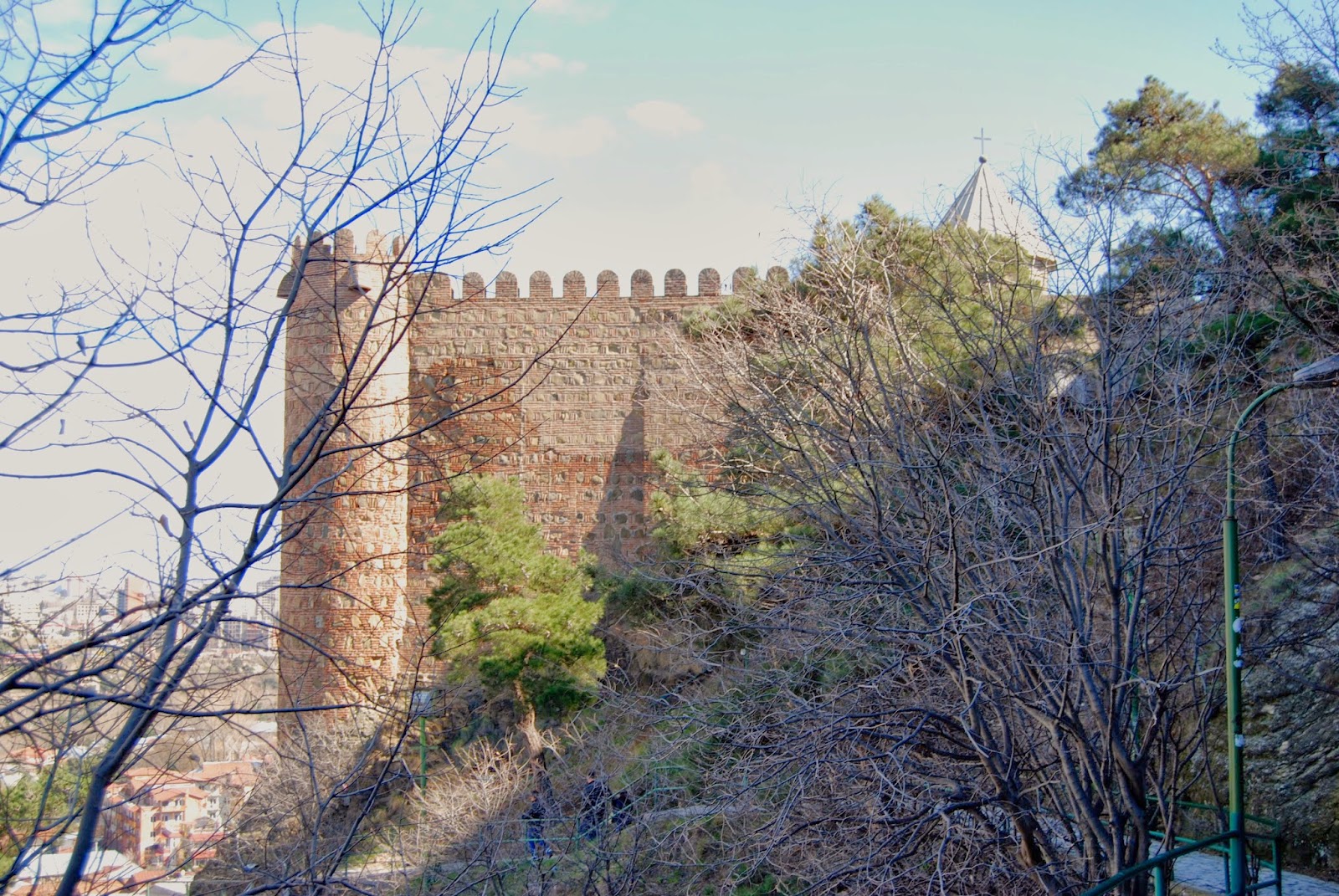 Princess Clarissa excited to enter the gates of the princess castle.... 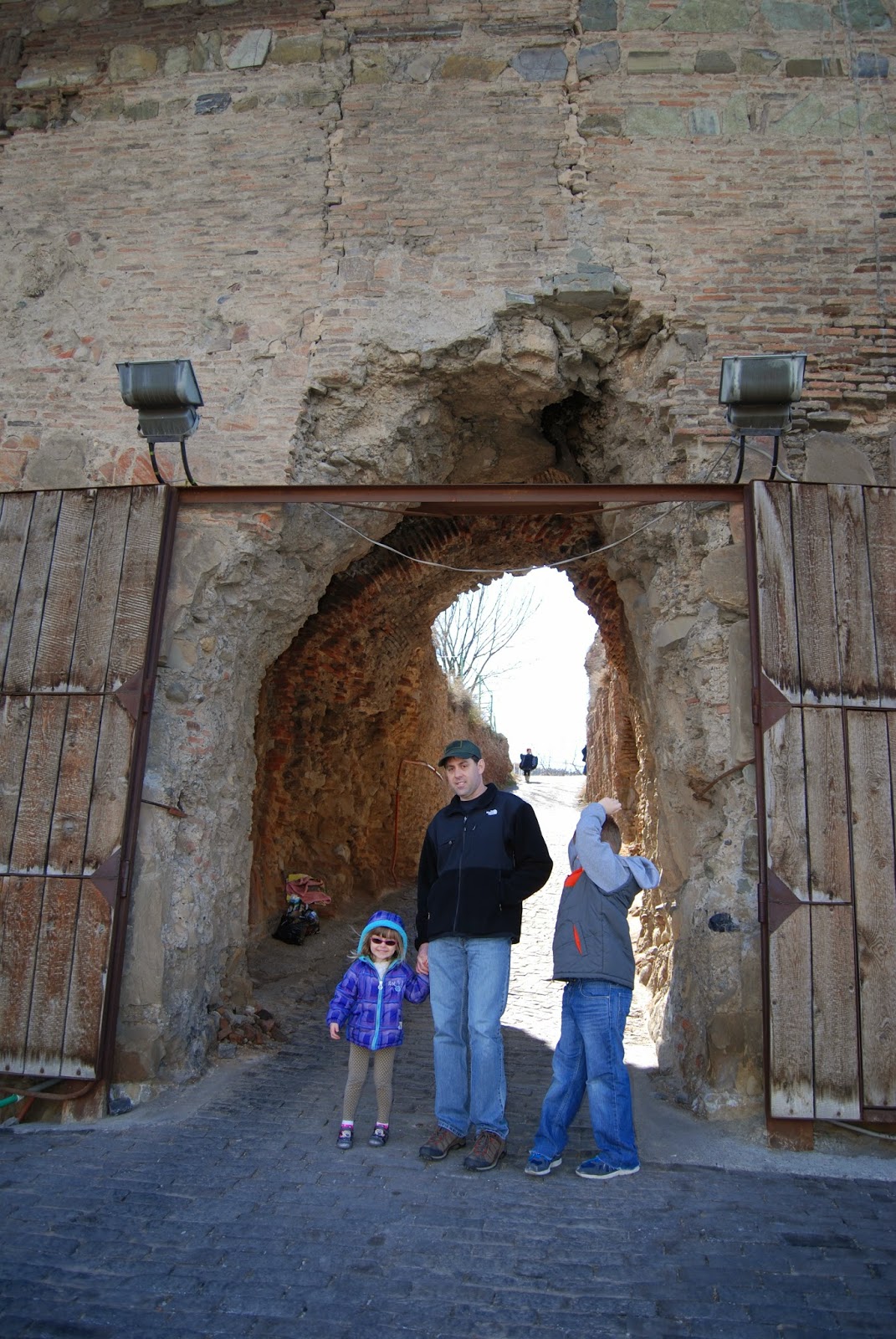 Mason contemplated being king and overlooking his kingdom.... 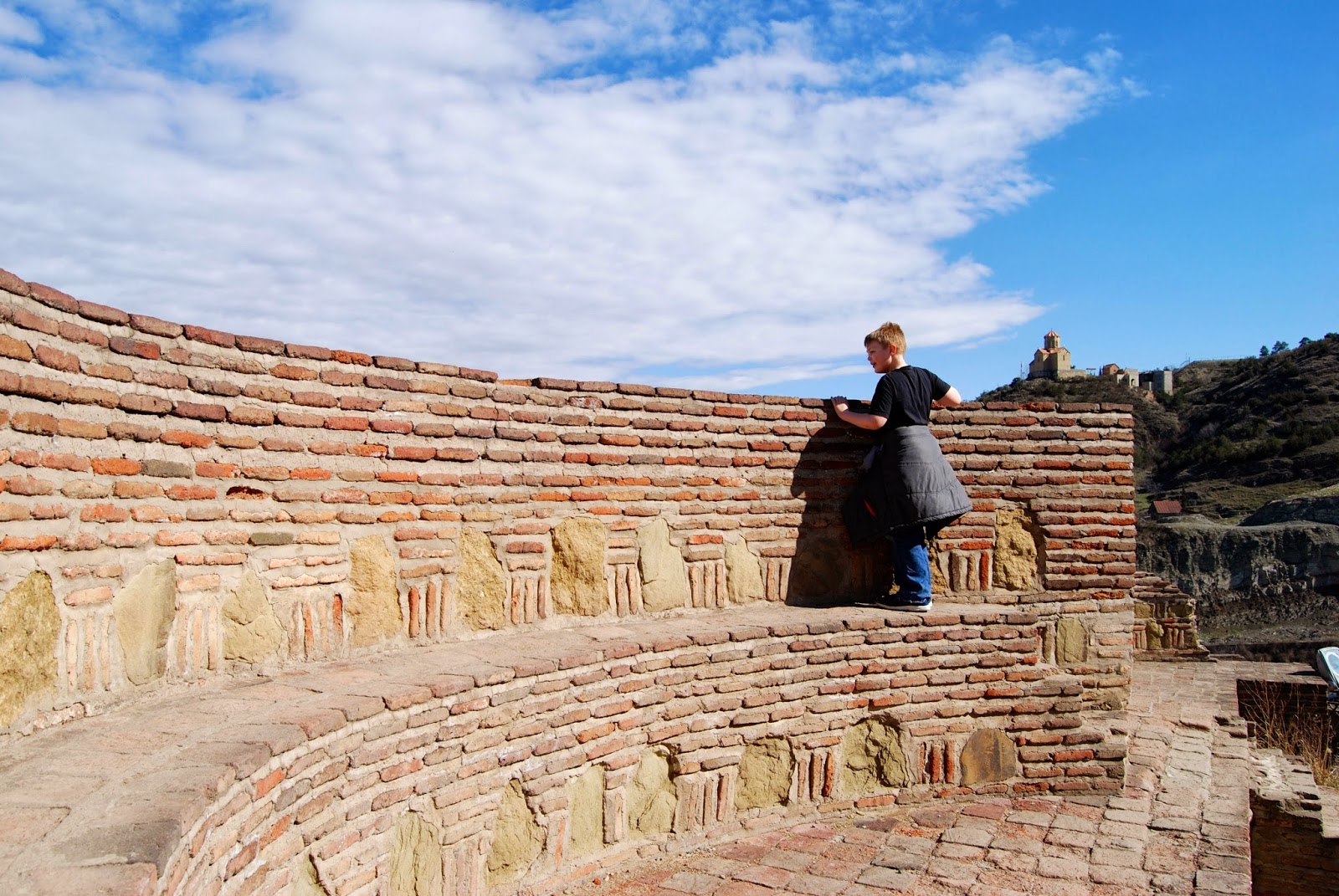 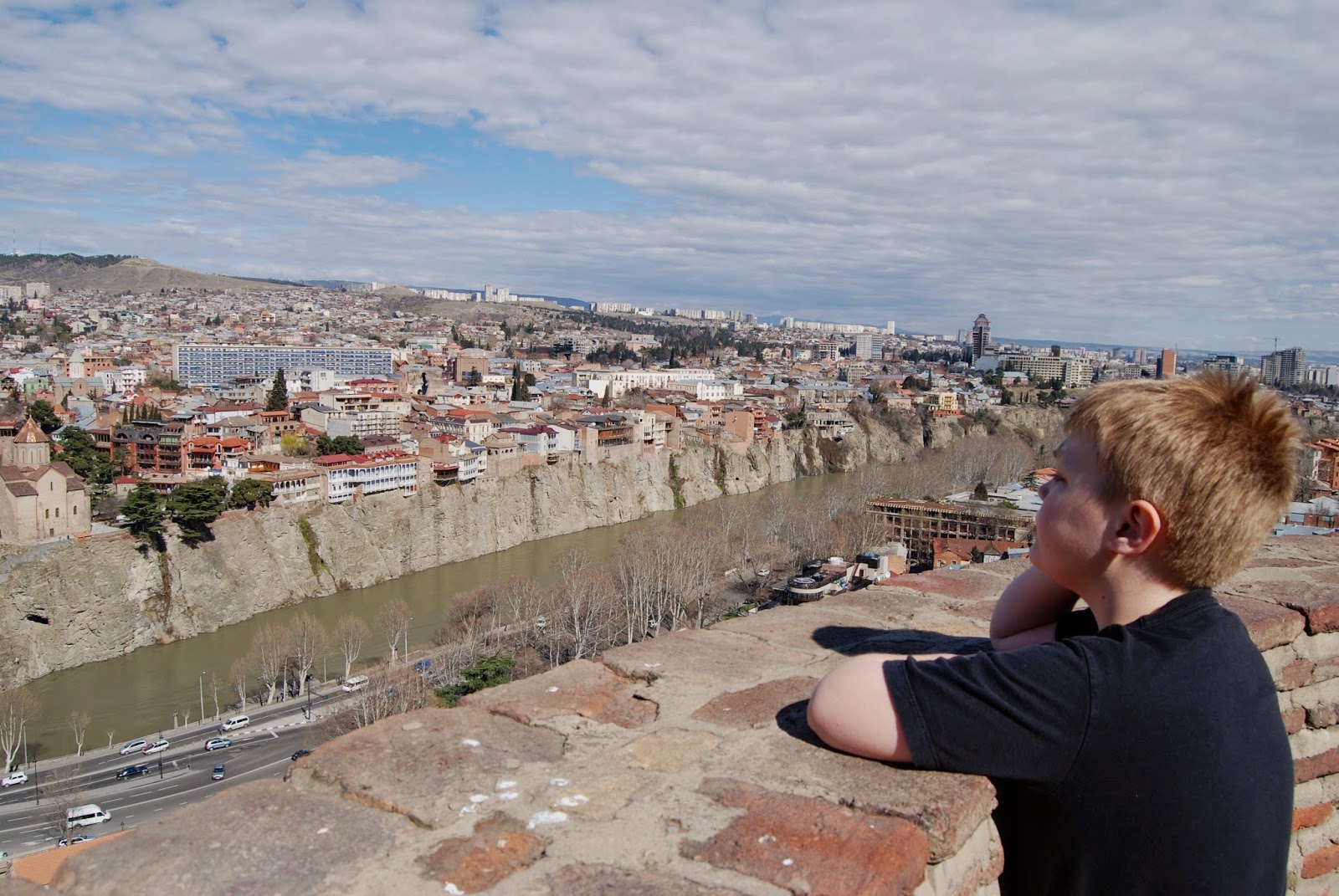 For a little perspective.....to see how tall it is on top of the mountain 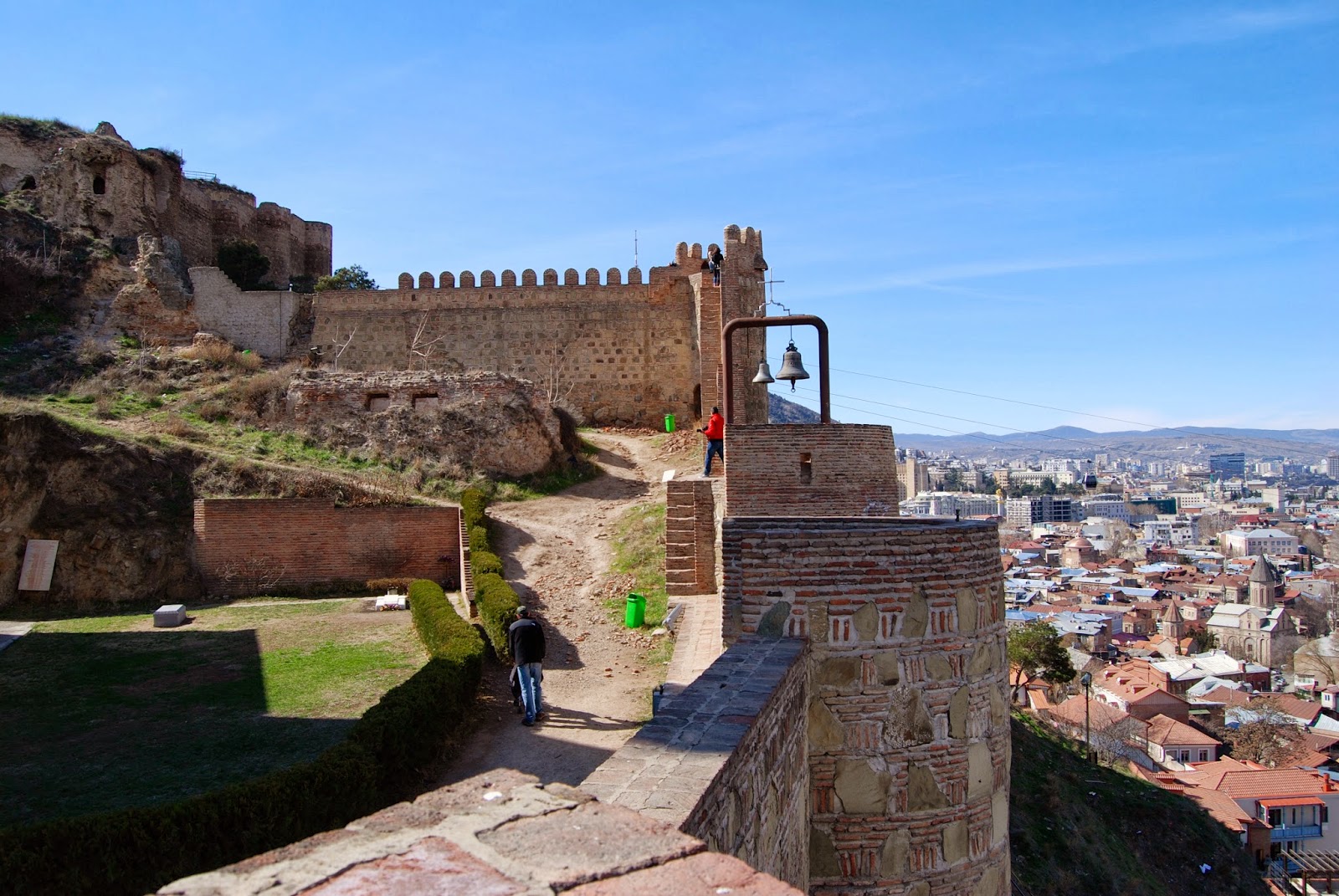 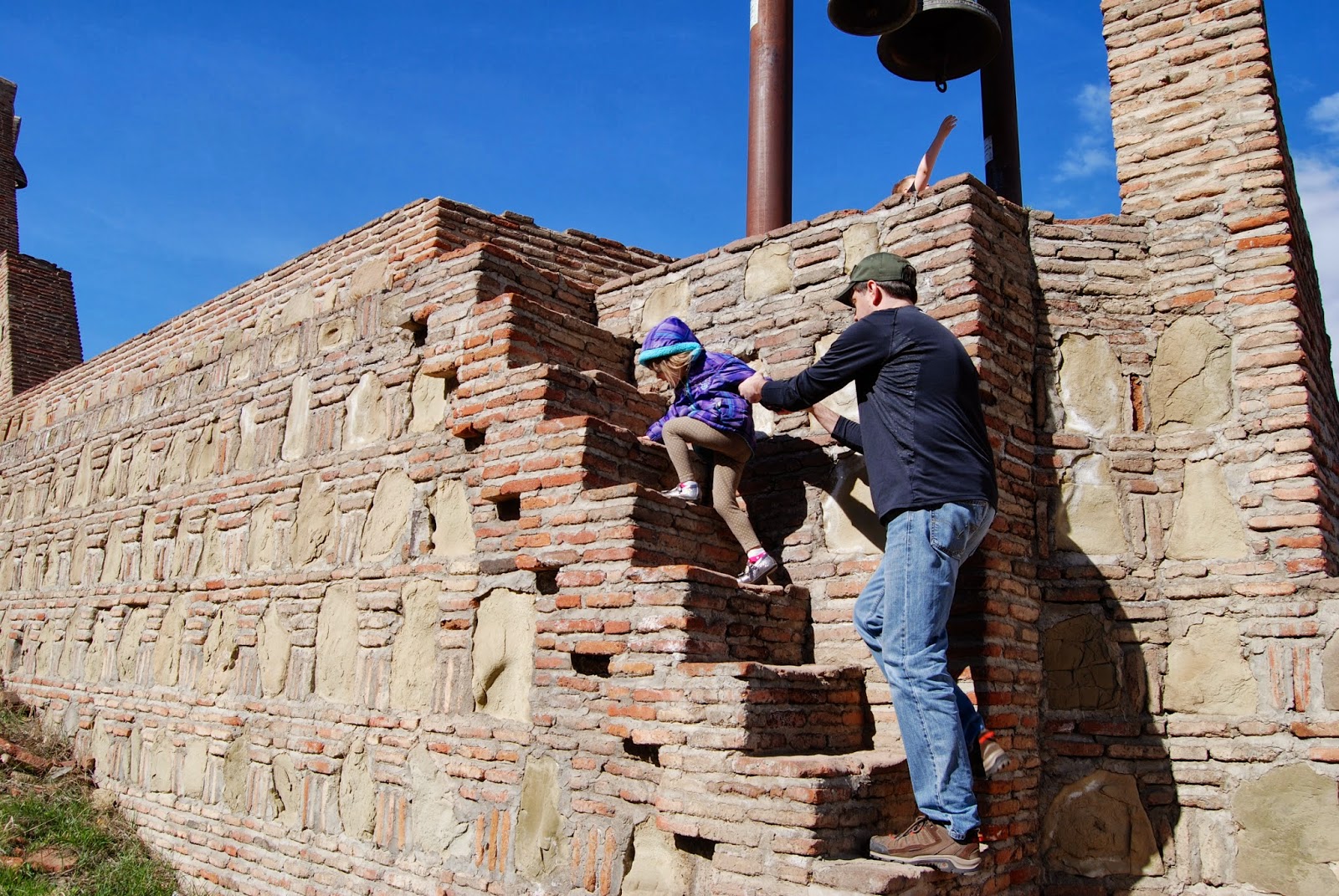 The boys on the other hand went to the top of the tallest tower.... 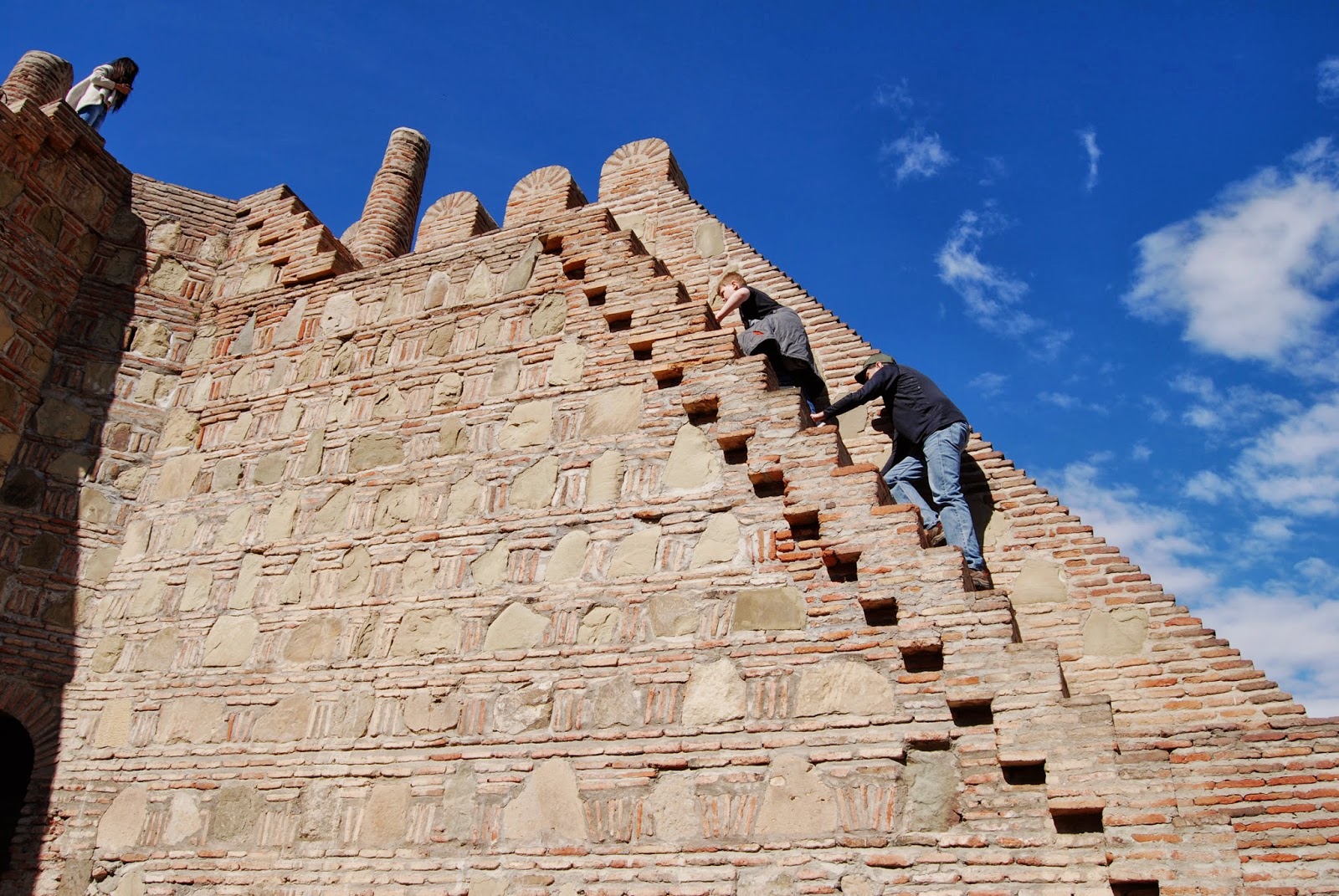 Richard snapped a quick picture at the top, the temple is behind Mason. 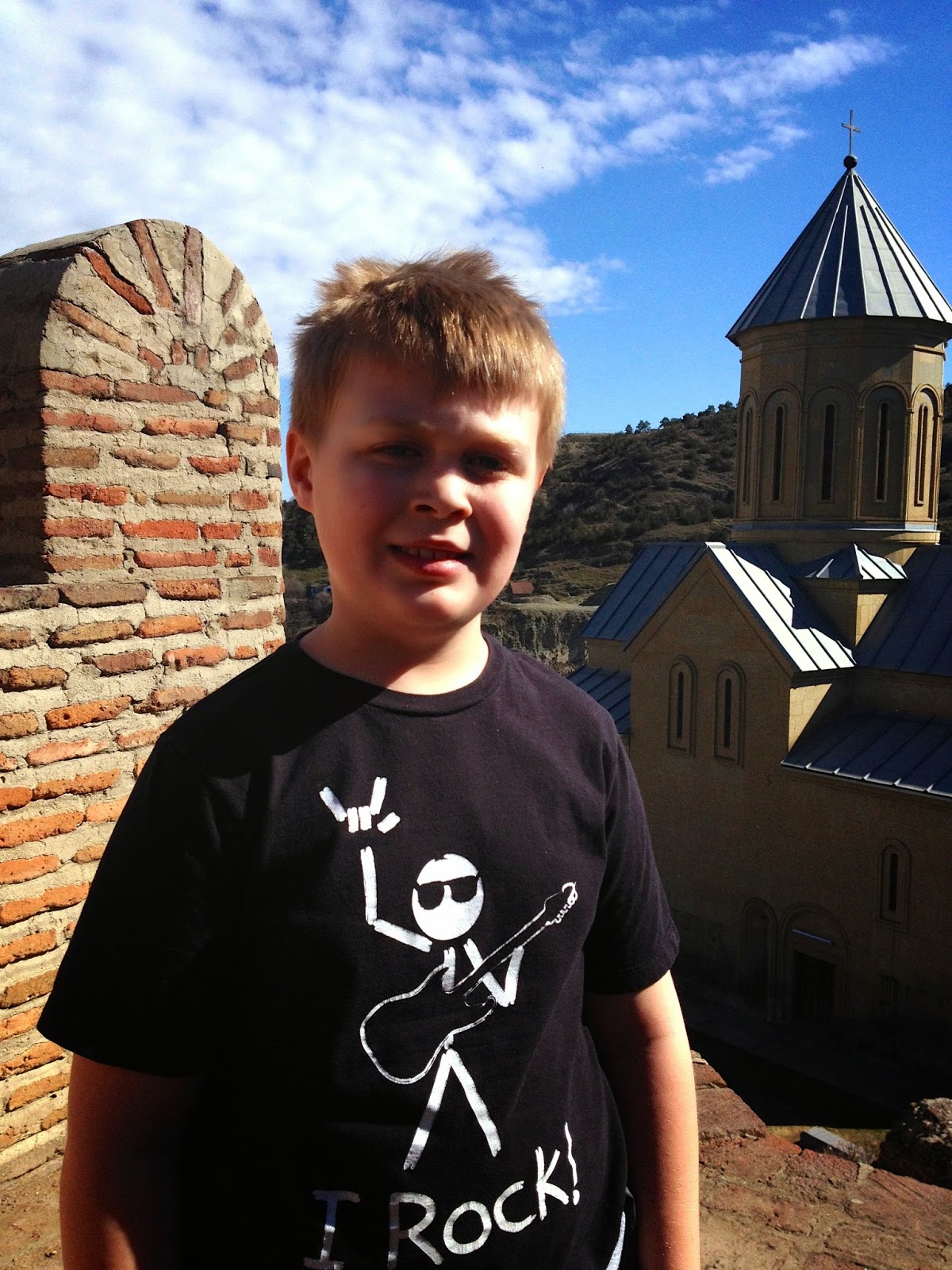 I think I got several gray hairs looking at Mason up that high..... 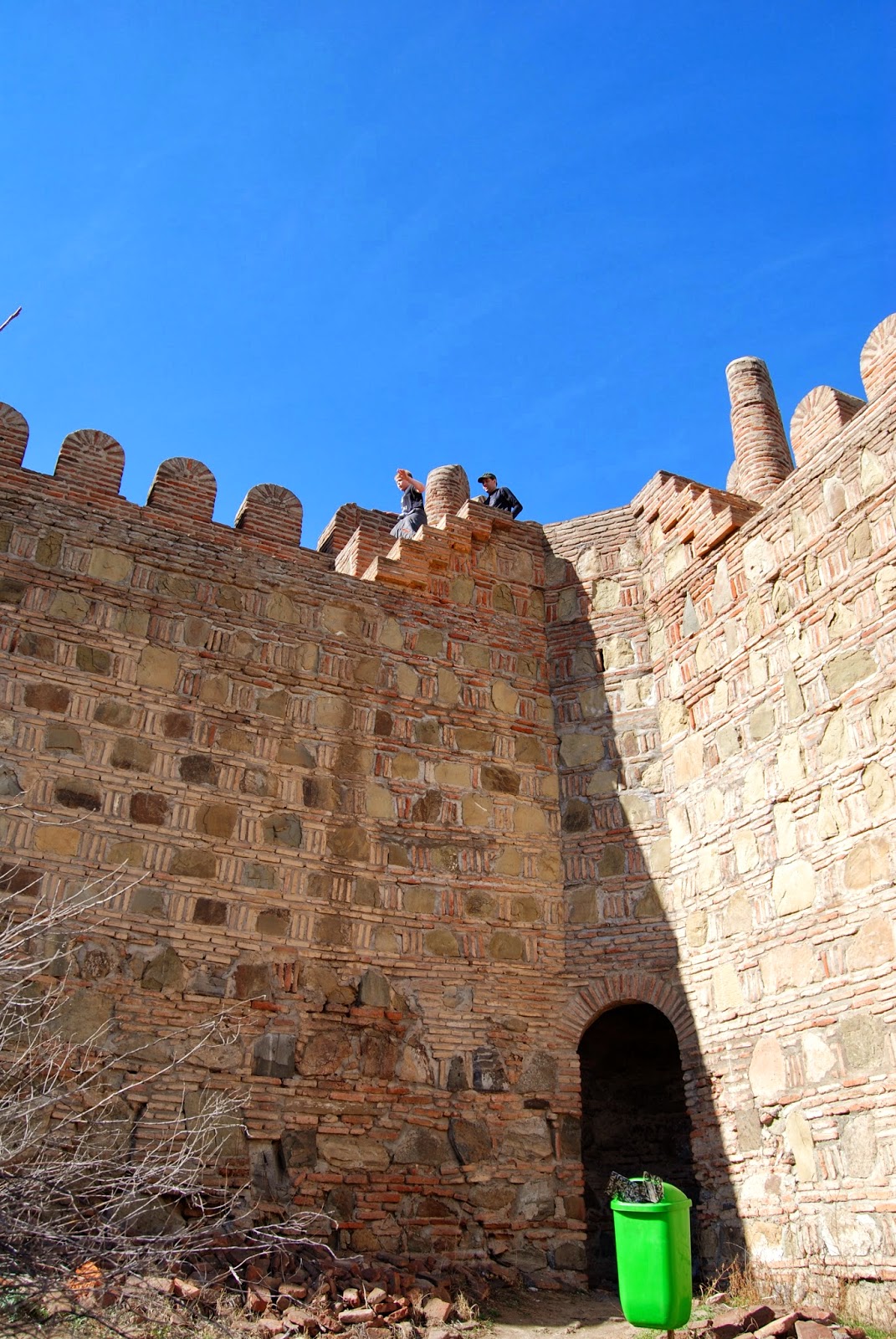 Clarissa claiming her room in the castle..... 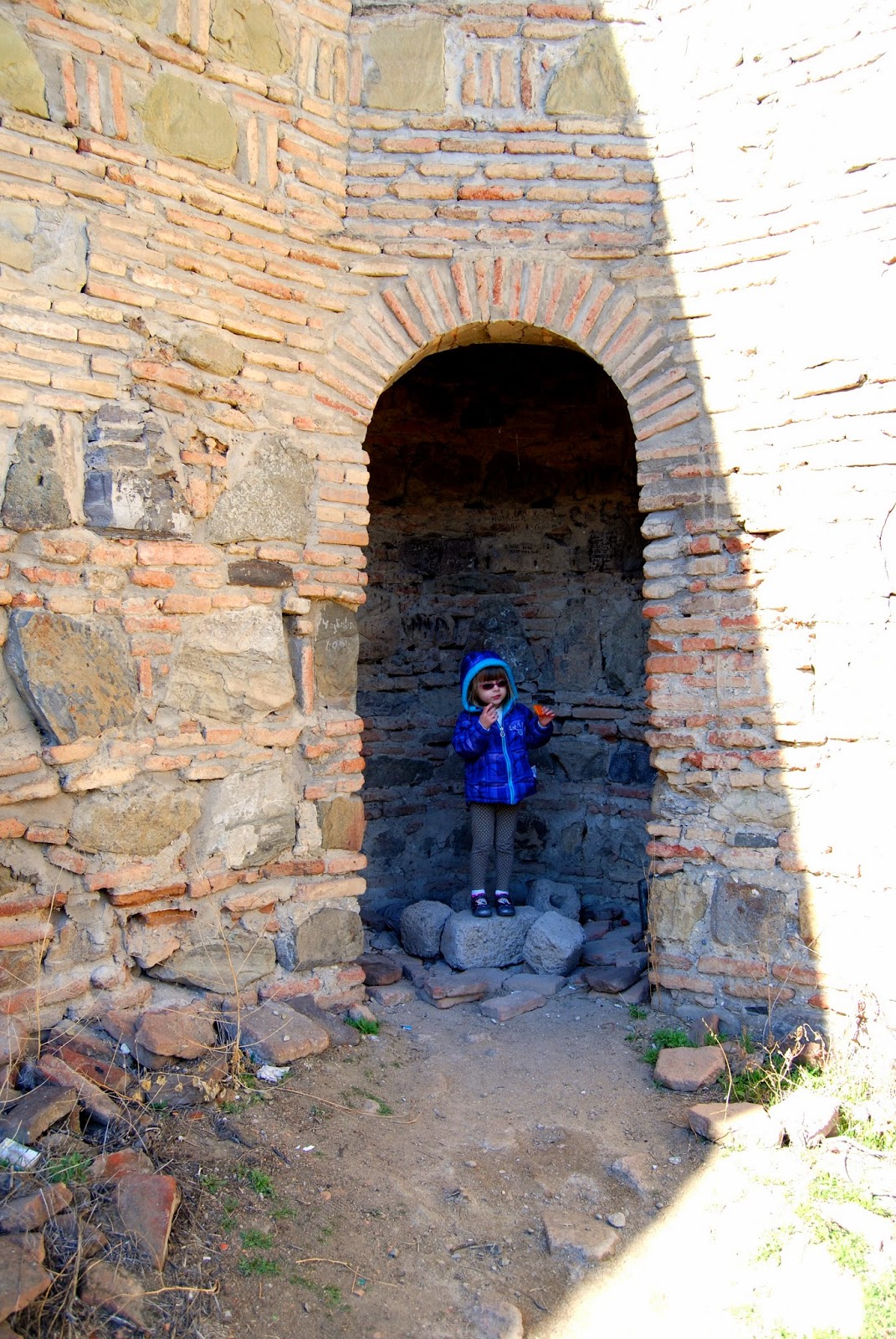 We only walked around a portion of the fortress due to our nerves being shot with Clarissa and Mason having no fear climbing around.....we stopped as the fortress got more rustic. Richard took an instagram of the view from the air tram on our way down. 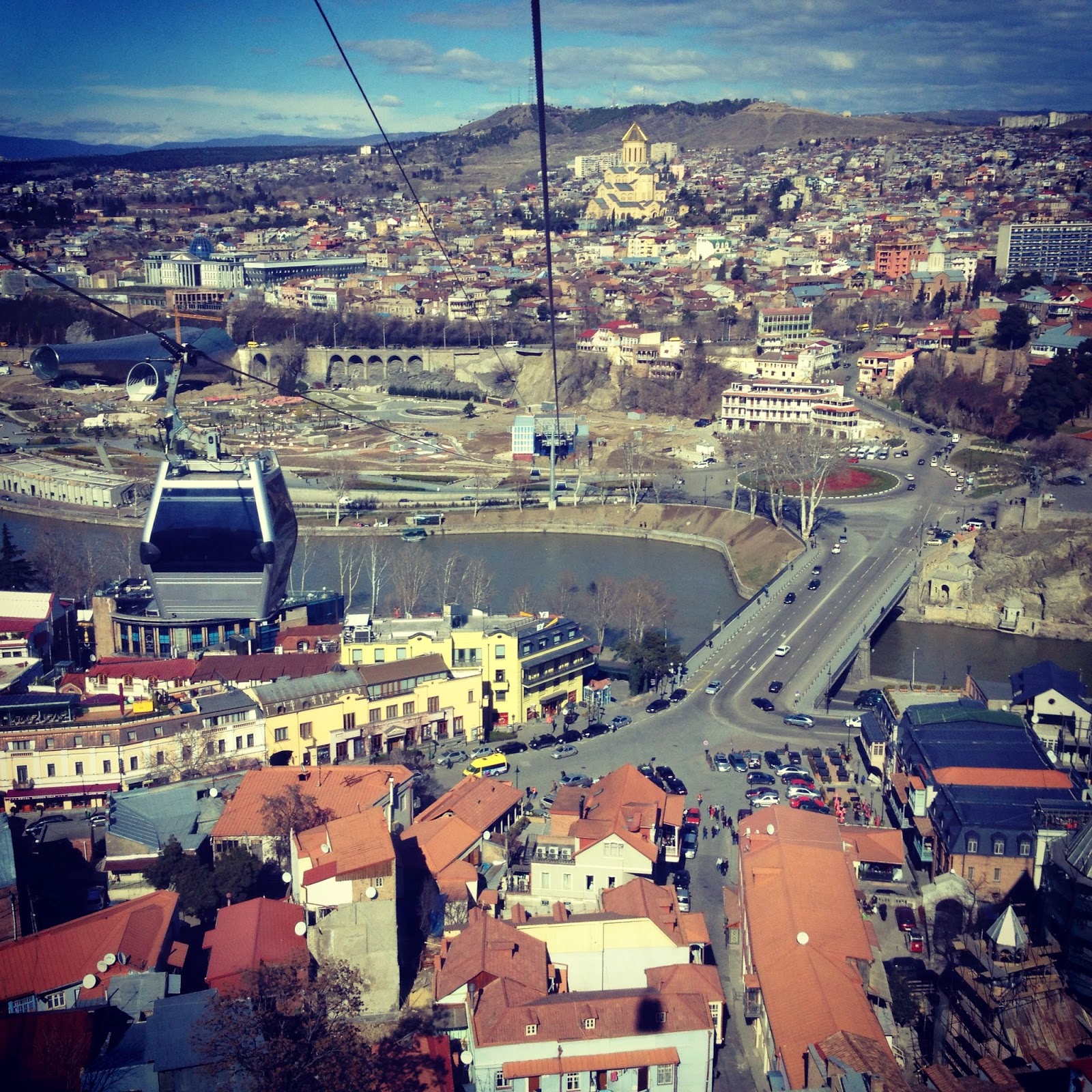 I talked about the Peace Bridge the other day. One thing I read is that it is sometimes called the maxi pad bridge....I can definitely see that from the air! 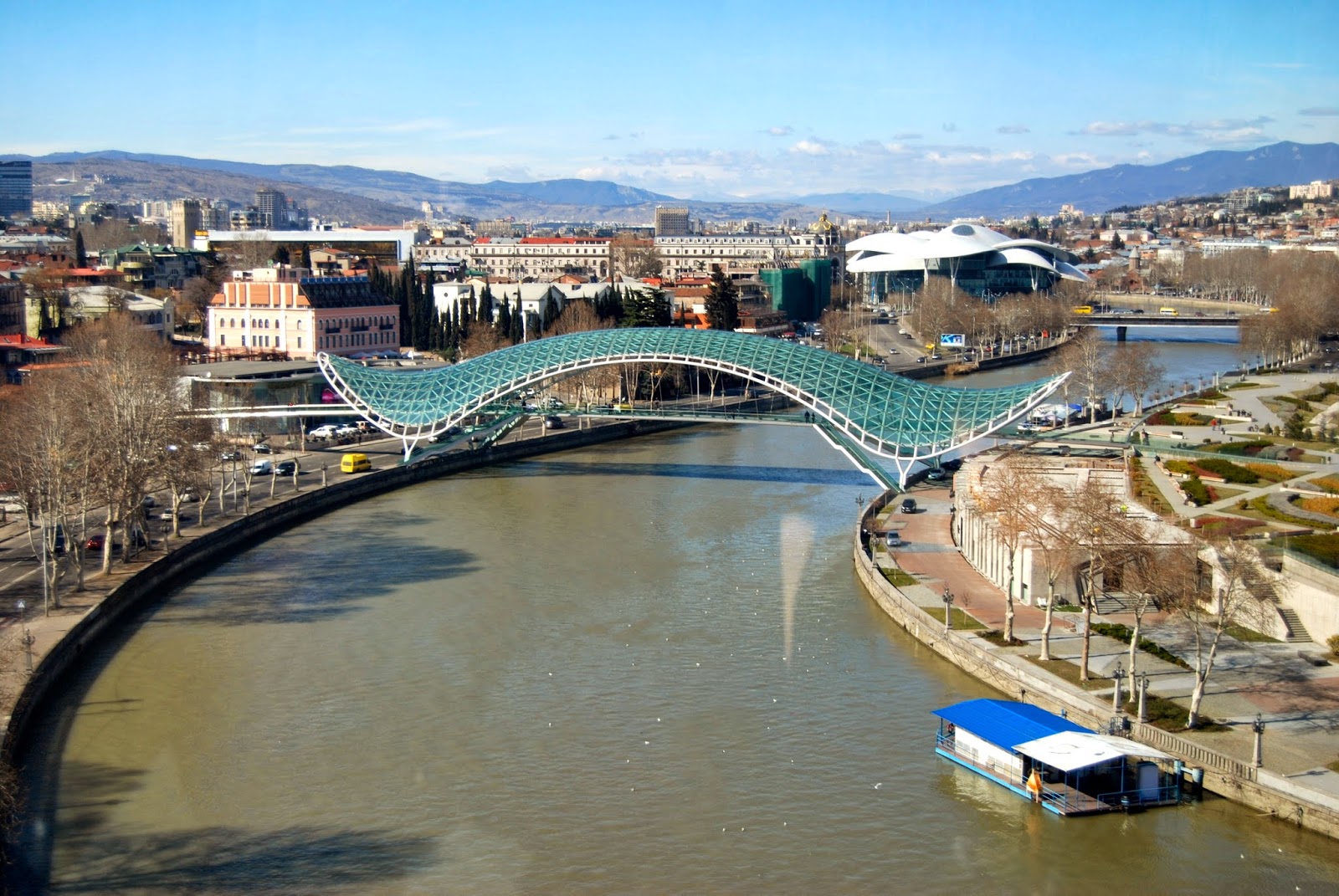 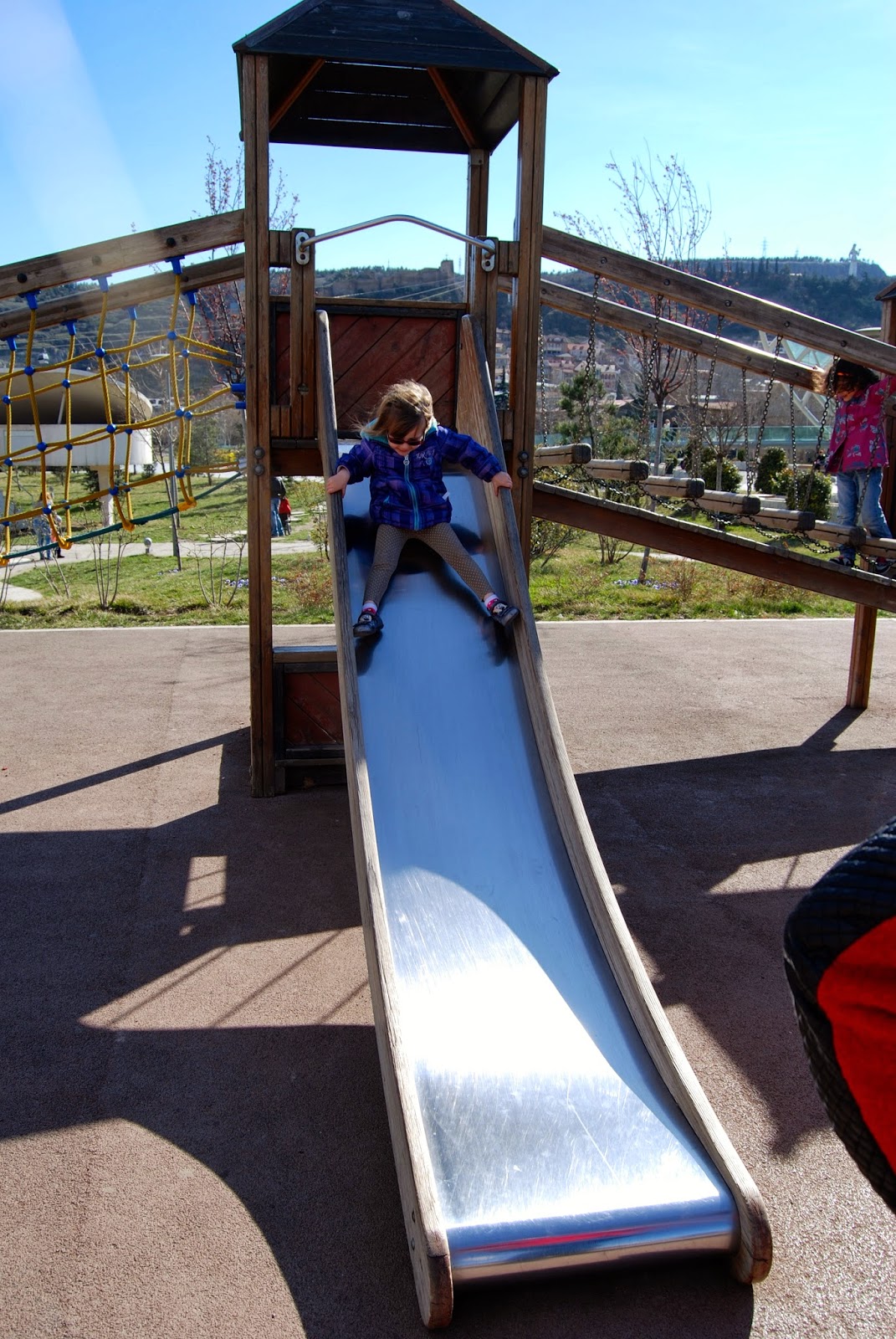 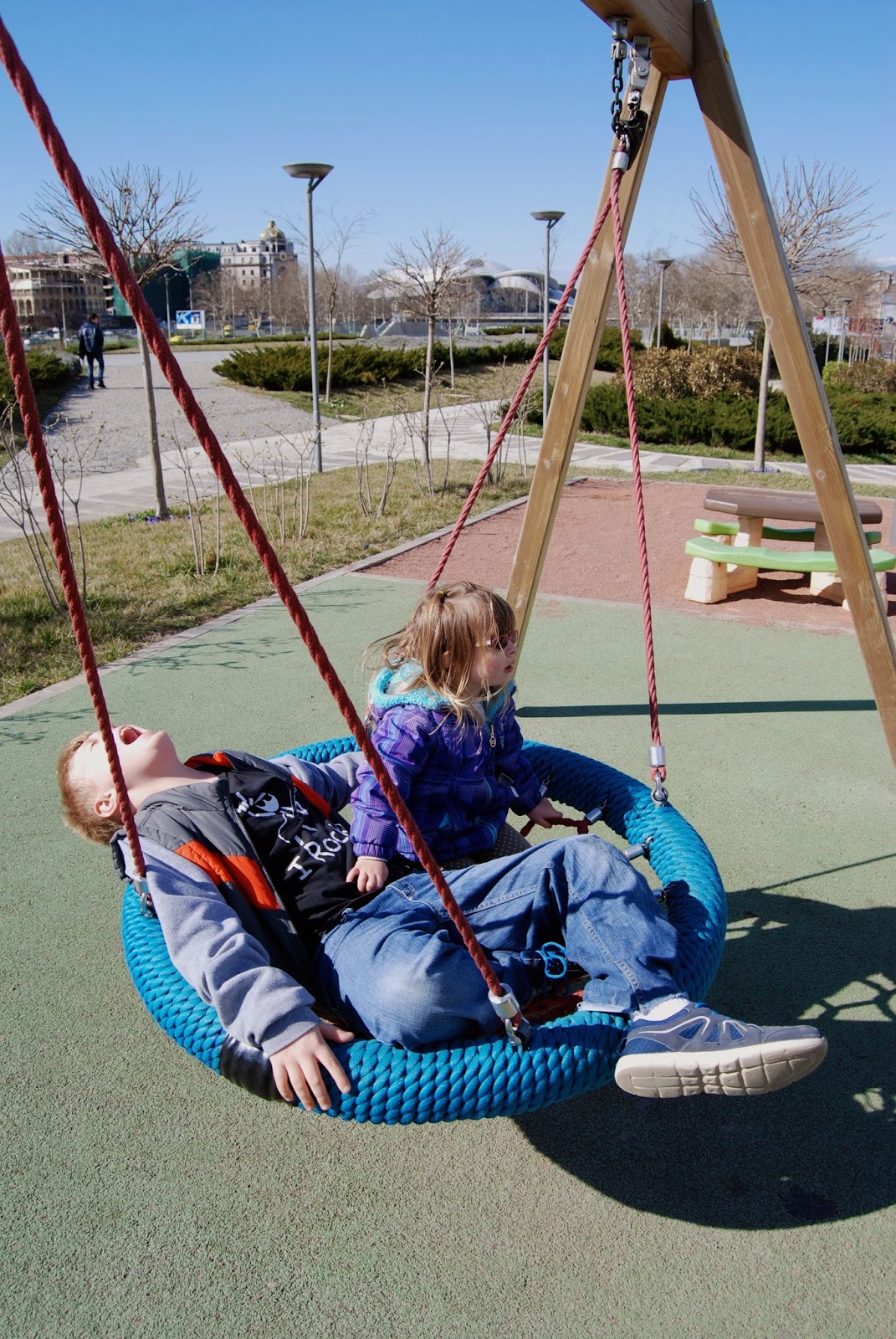 So before we arrived we heard there was a restaurant called the Elvis Diner....given Mason is a big Elvis fan (he was even Elvis in last years dance recital) this was on our list of places to visit. So we had timed our excursion to end with dinner at the diner. Mason was very excited. They serve American food (Elvis Cheeseburger anyone? Yeah, I'm talking to you Alysia!), they also serve (tasty from what I have heard) sushi, pasta, salads, milkshakes....a little bit of everything. There were lots of statues and memorabilia from that era. 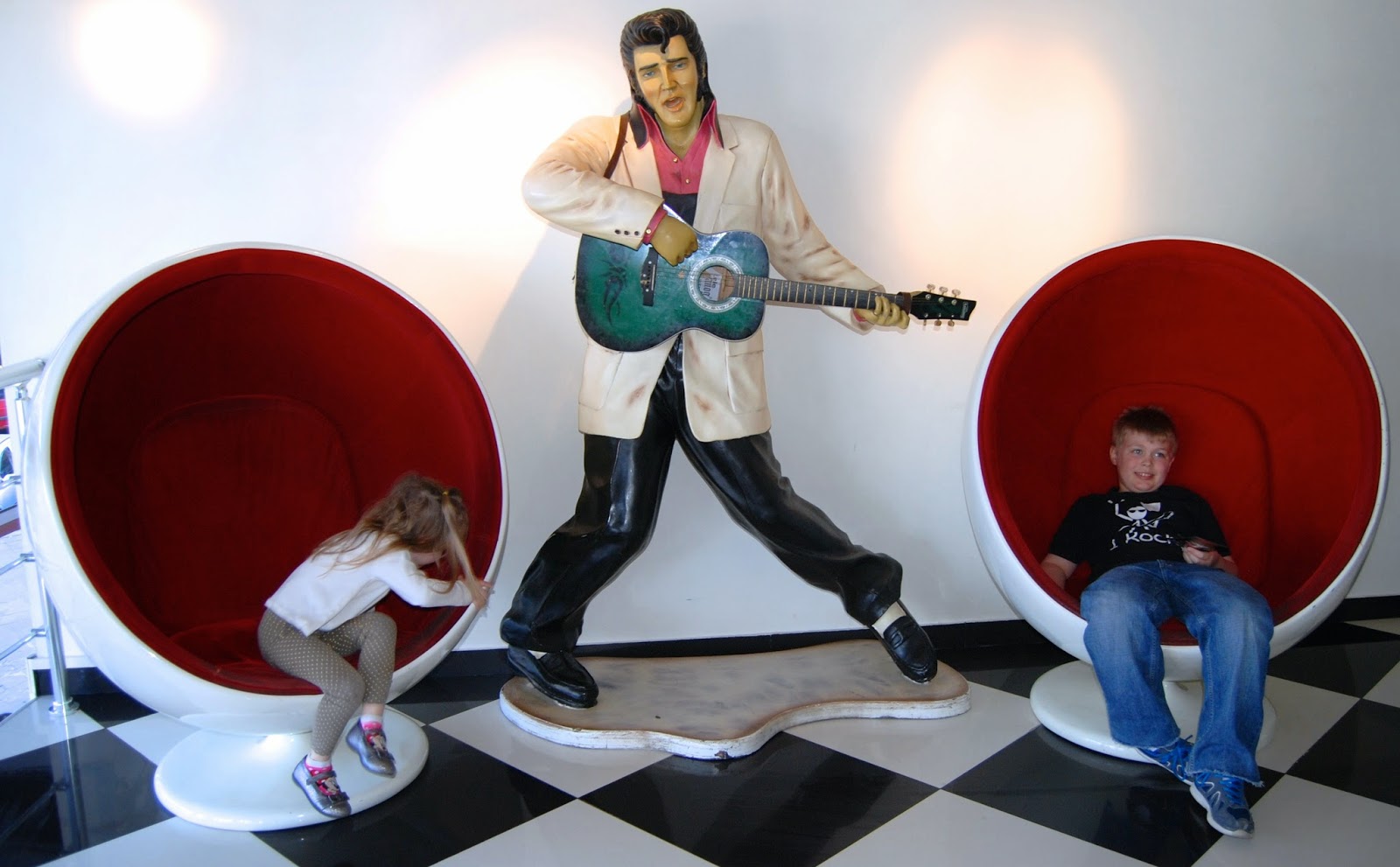 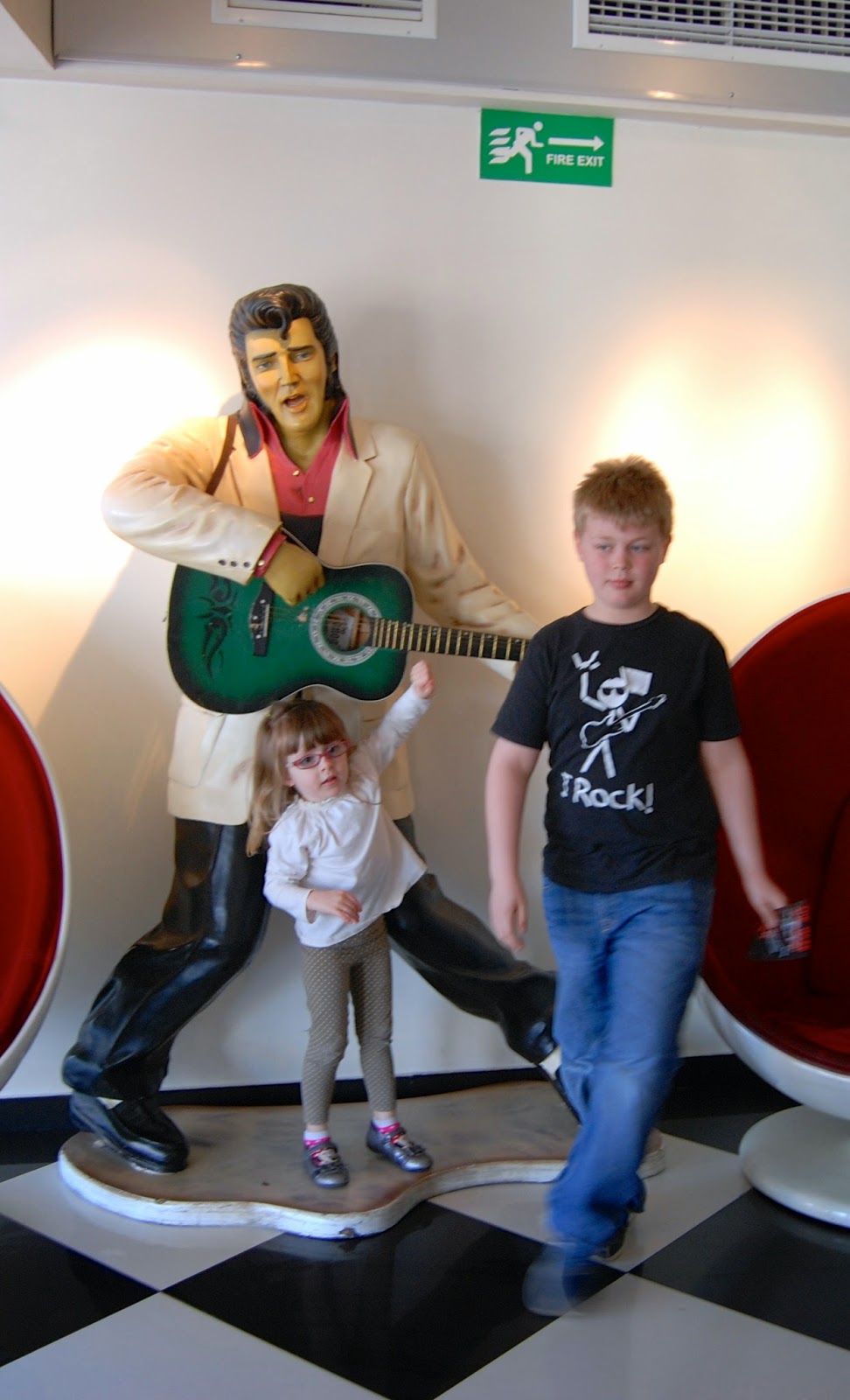 Can't tell if he enjoyed hanging with Elvis or not......one thing Mason did question is why they weren't playing Elvis songs on the overhead music or Elvis movies on the TVs...... There are signs up in the Tbilisi Mall that they are opening another location there, which is super close to our house....I have a feeling we might become Elvis Diner regulars at that location :) 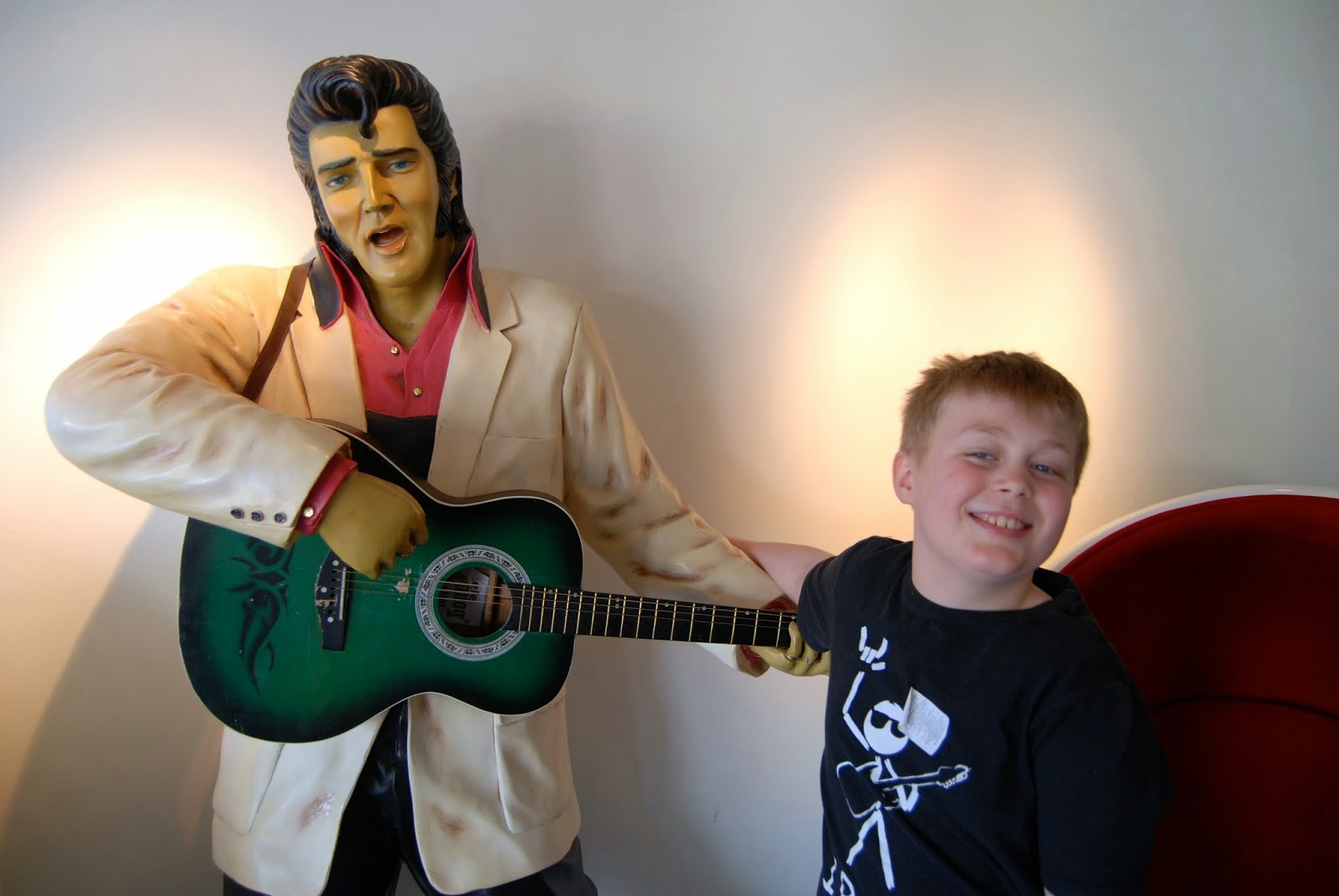