So we took our first out of the city excursion this weekend. We head up to Mtskheta, Georgia. It is about 10 minute drive from our house. It used to be the capital of Georgia before it was moved to Tbilisi.

According to our tour guide, the city has be inhabited since the 4th century BC....and it was a pagan city then since Jesus hadn't been born yet.

We were in the historical old portion of the city next to the parking area (aka the tourist portion). Most of the homes looked like this one. 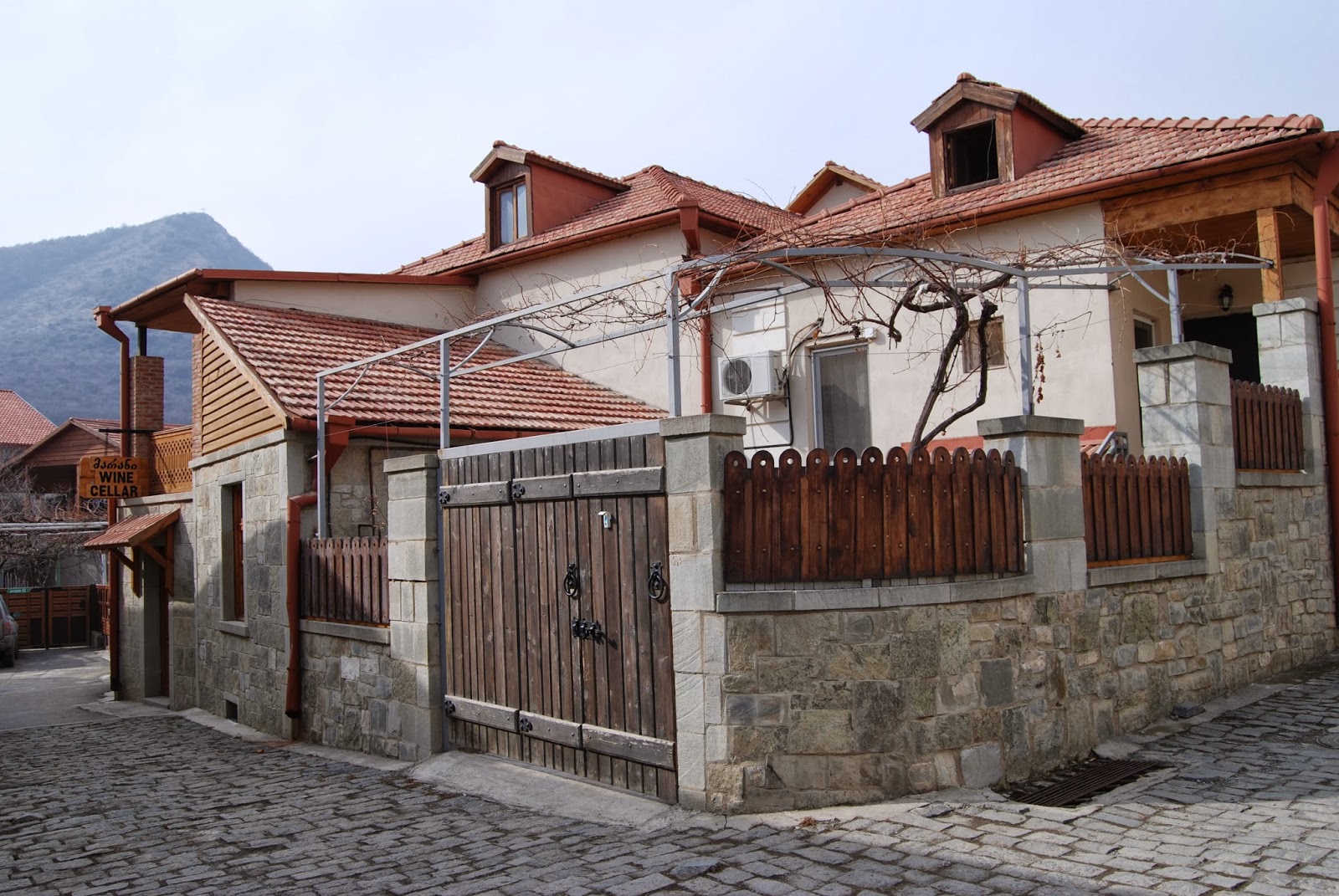 Cobblestone roads with houses interspersed. Nearly ever house had grape vines growing on the fences (we will have to come back late summer before the grape harvest....that should be beautiful).

Our tour guide talked quickly (impressive with English not her native language), I missed some being with Clarissa who took her sweet time walking. We made it to the main point of interest, the Svetitskhoveli Cathedral. 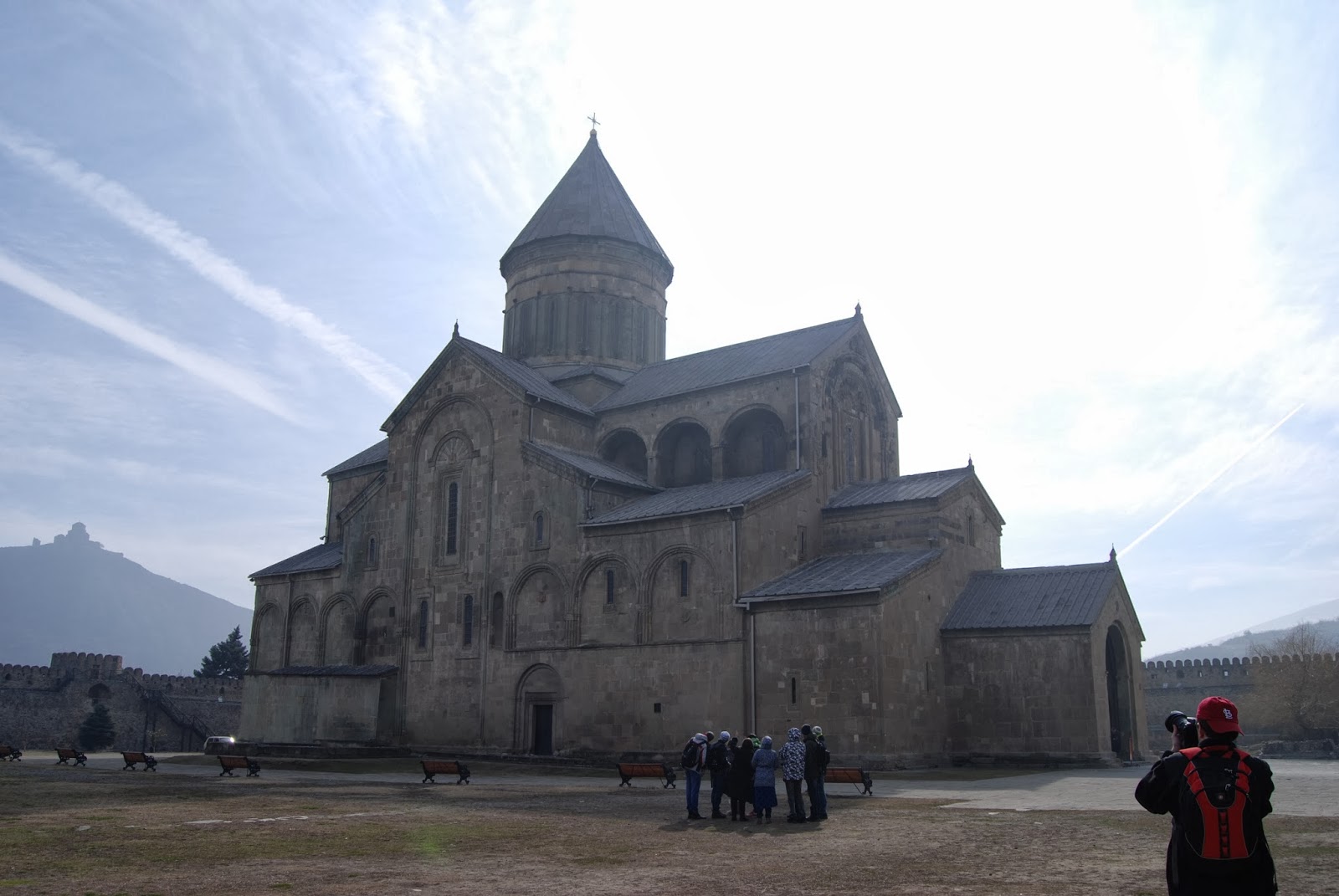 Parts of the original structure date back to the 5th century (pillars primarily, inside there was a portion of these pillars exposed under glass that we could see). The majority of this building was built in the 11th century. The main exception to that is the dome at the top. With major invasions, the dome was typically the first thing to go. The dome you see here was added on during the 17th century and is much smaller than the prior domes.

In the background on top of the hill is Jvari Monastery...but I will save that for another post when we actually go visit it.

Around the perimeter you notice a wall in the background. The wall surrounds the whole cathedral. Throughout this wall you notice little doors here and there. 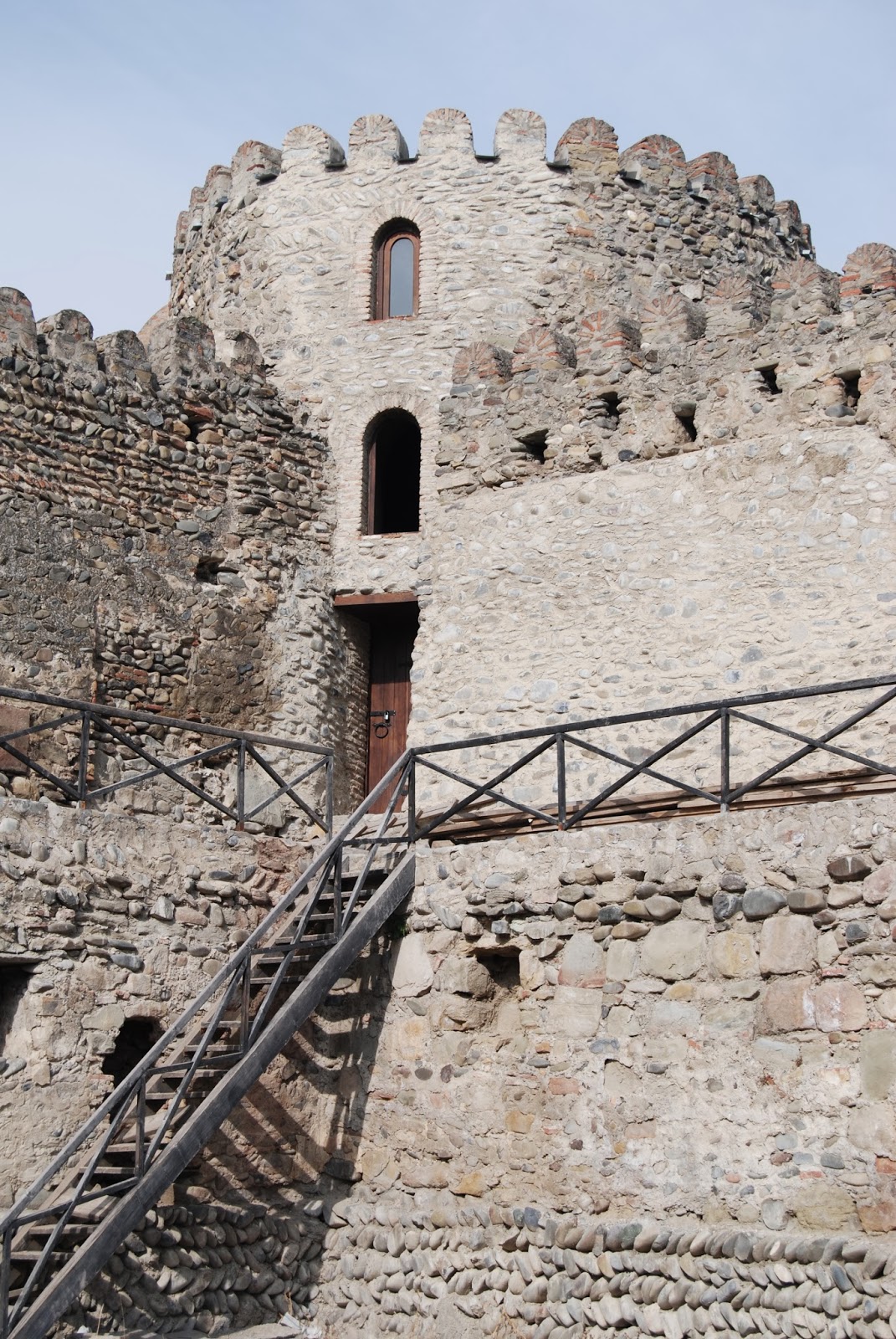 These doors are entryways to small rooms. Inside these rooms is where monks currently live! Outside of one door I saw a pair of muddy tennis shoes....a little mix of past and present time.

From the outside you see lots of windows into the cathedral. 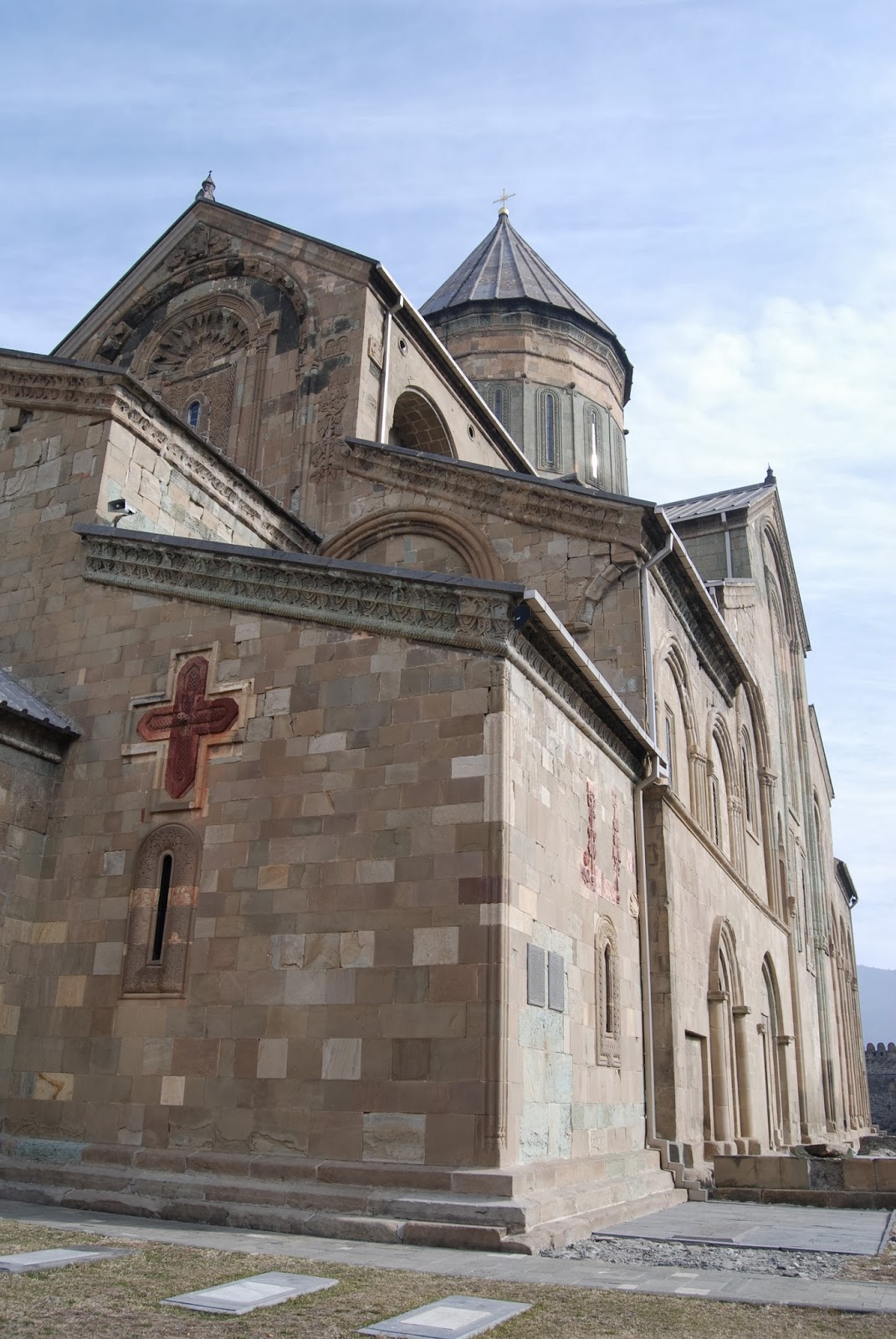 From the inside of the main room there were very few windows. The church conducts Georgian Orthodox services. Therefore, I had to put on a skirt wrap before entering since I was wearing pants and put my scarf over my head (which since Clarissa had entered Mommy carry me stage our tour guide helped put my skirt on). On the inside, it was cool and dark. A handful of windows do shine in and there were numerous candles lit around the room. The monks were conducting a service (communion and all). I felt a little bad with the tour guide telling us all about the neat stuff inside while people were praying and taking communion (no cameras were allowed....so no pictures).

There was the robe that Jesus wore that a man brought back from Rome after the crucification. His sister (I forget her name, Clarissa was being shushed b/c she didn't like the darkness) saw this robe and died holding it due to the emotion present in the robe, she is buried in the church. From her grave grew a tree that was used to build pillars inside of that church. One of the pillars oozes a healing oil, people would visit the pillar and break of little piece of wood to make themselves a healing cross to have. Due to the pillar slowly disappearing the remaining bits left have been encased in a stone pillar. I did notice on one side of this stone pillar there was an oily patch.

There was a small room that for those that can not make a pilgrimage somewhere faraway (Jerusalem I think), they can visit this room three times and that will be equivalent to the pilgrimage.

There was a room with a deep well with healing waters. Our guide opened a lid and we were able to peer in. She said when it is warmer, sometimes there will be a bowl of this water out for you to drink from. Also inside this room was a small door about halfway up the wall. Much to Mason's enjoyment she said this door leads to a series of secret passages. The passages are heated (not sure how since there is not electricity, didn't ask) and more importantly they provided hiding places when the castle was under siege. She showed us multiple little archways around the top of the cathedral that were interconnected to that door. She said that a majority of the windows on the outside of the cathedral shine into the passageways. She even showed us on the outside a ladder up at the very top that also accessed the passageways.

We also went into another alcove that also accessed the well's water. It was once a baptismal fountain for royalty covered in gold. What is left is a stone box with a lid. It is still used for baptism. She mentioned that all the separate little rooms/alcoves allow for multiple ceremonies to be conducted at the same time.

There are seven (I think) Georgian kings buried under the cathedral. There are grave markers throughout the cathedral but our guide told us the markers don't mark actual locations. In the past, when a country was invade it was common place for the invaders to dig up prior kings and take the bones/dispose of them....I guess more of a psychological warfare of 'ha, he was great, take that'

What cathedral blog is complete without talking about the art work? There were a lot of paintings on the stone walls. The above mentioned stone pillar protecting the remnants of the wooden pillar had a painting showing the pillar's story. Another cool painting to talk about is a giant wall mural. The mural showed Jesus and the 12 aspostles. Around them was the sun, moon, and stars....as well as all 12 zodiac signs. Surrounding that is a landscape with animals and plants to the left and humans to the right. This was showing how everything is intertwined. This painting was done in the 17th century, but some feel that it needs to covered up since the zodiac signs are pagan and that doesn't go with Christianity. The cathedral argues that the zodiac signs are constellations in the stars which is part of the heavens....

Our guide made sure to point out a painting that showed the crucification scene that everyone is used to seeing. What made this painting special was the grey/blue and red alien ships to the right and left of Jesus hanging on the cross.

Several sad things to see on the murals, a lot of them had the faces scratched off. This occurred when Muslims invade/overtook the cathedral. I don't remember the exact initials but it was like E + M....typical carve in to a tree romance....except it was done during the soviet era when the cathedral was converted into a museum.

Outside the cathedral, our guide pointed out the gift shop (tourist town....) as well as the deer. There are two deer which were gifts to the Patriarch. He is having the monks care for them. 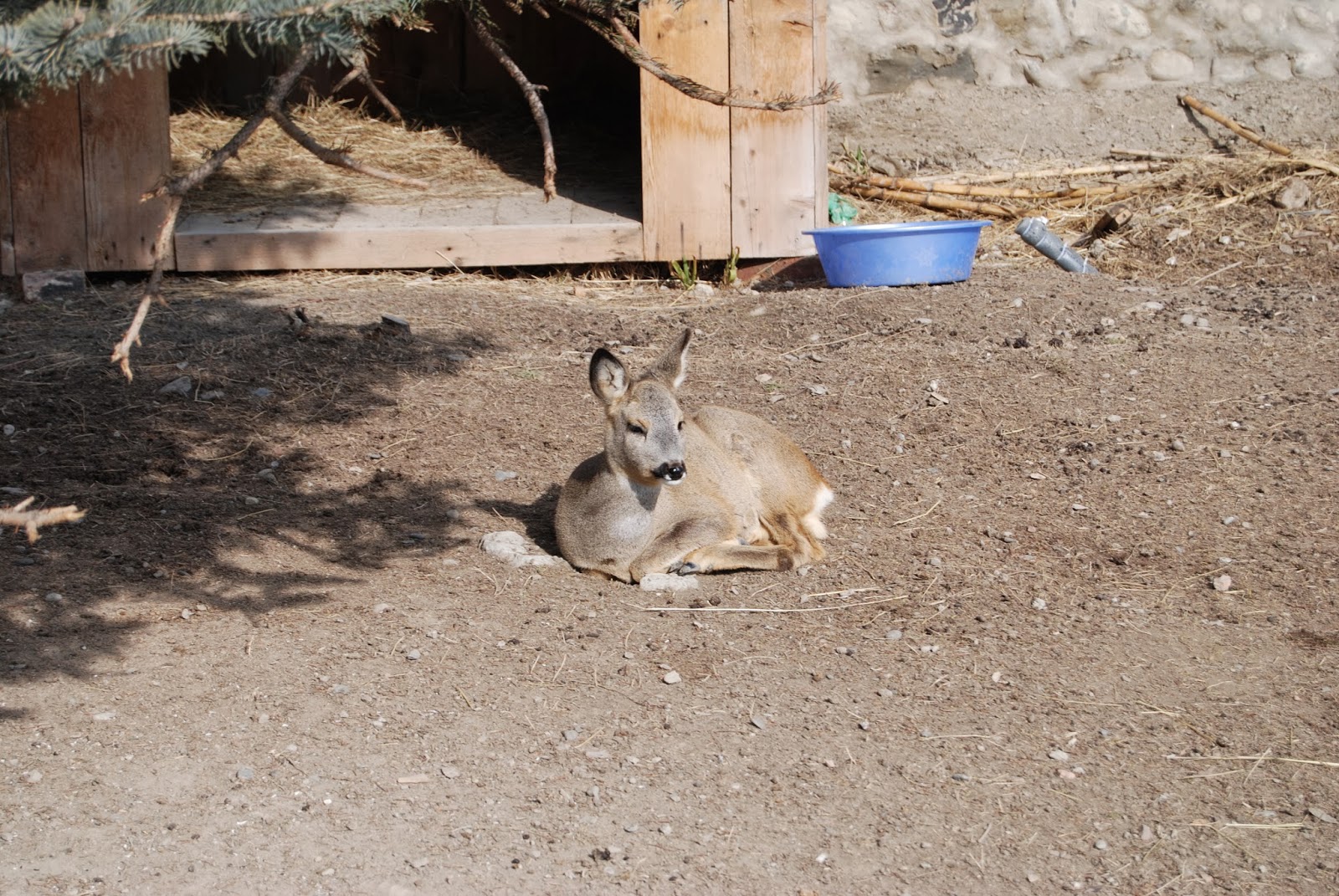 So our tour guide left us in the courtyard of the church. We wandered around and took some pictures. There were also chickens which we heard (and saw). This is what Clarissa found the most interesting. 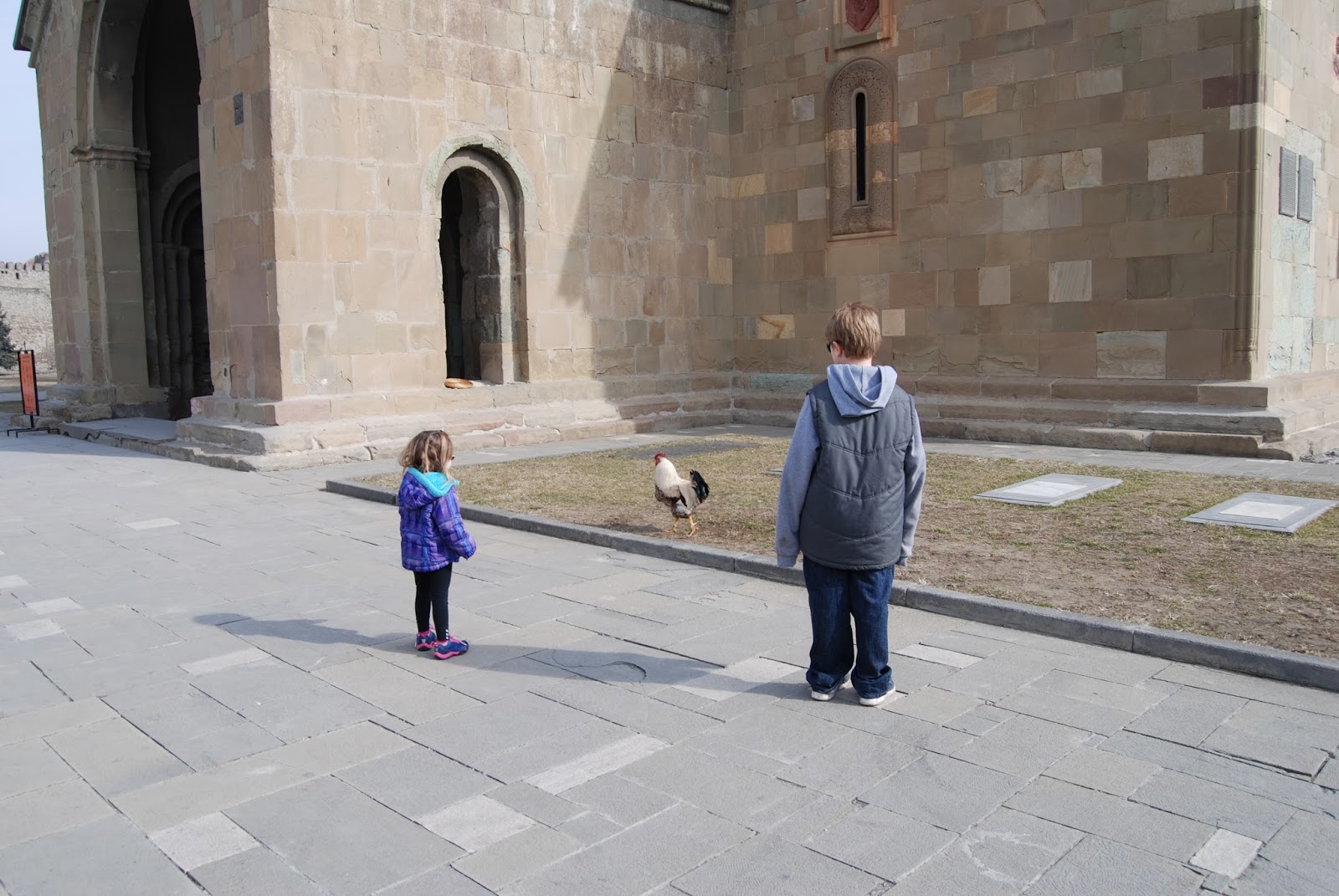 We also saw some of the clay pots previously used for wine making (they are not currently used since they need to be completely buried underground to control the temperature for proper fermentation). 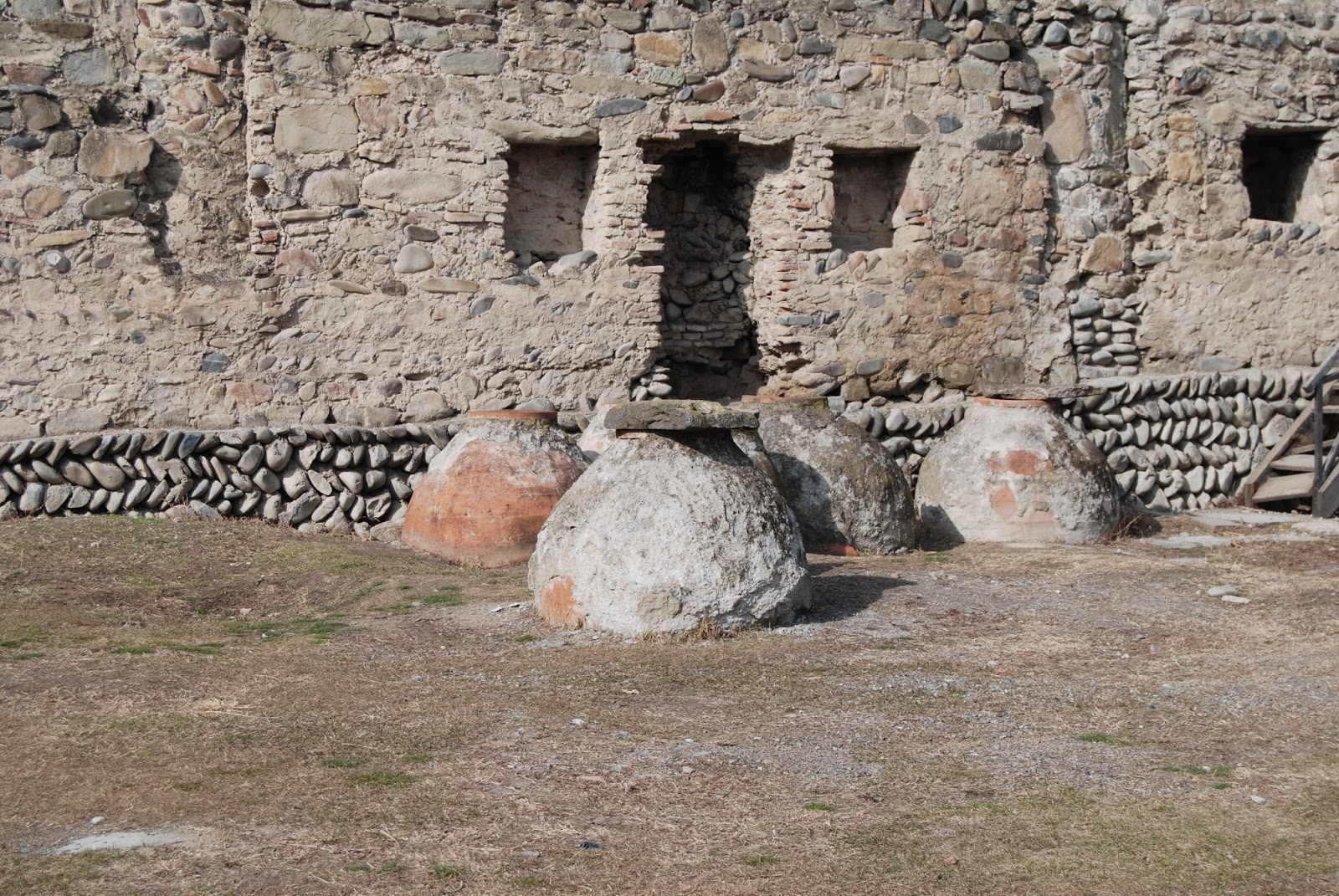 At the top of the hill on the far left is a cross, this represents that a large number of kings have also been buried on this hill. 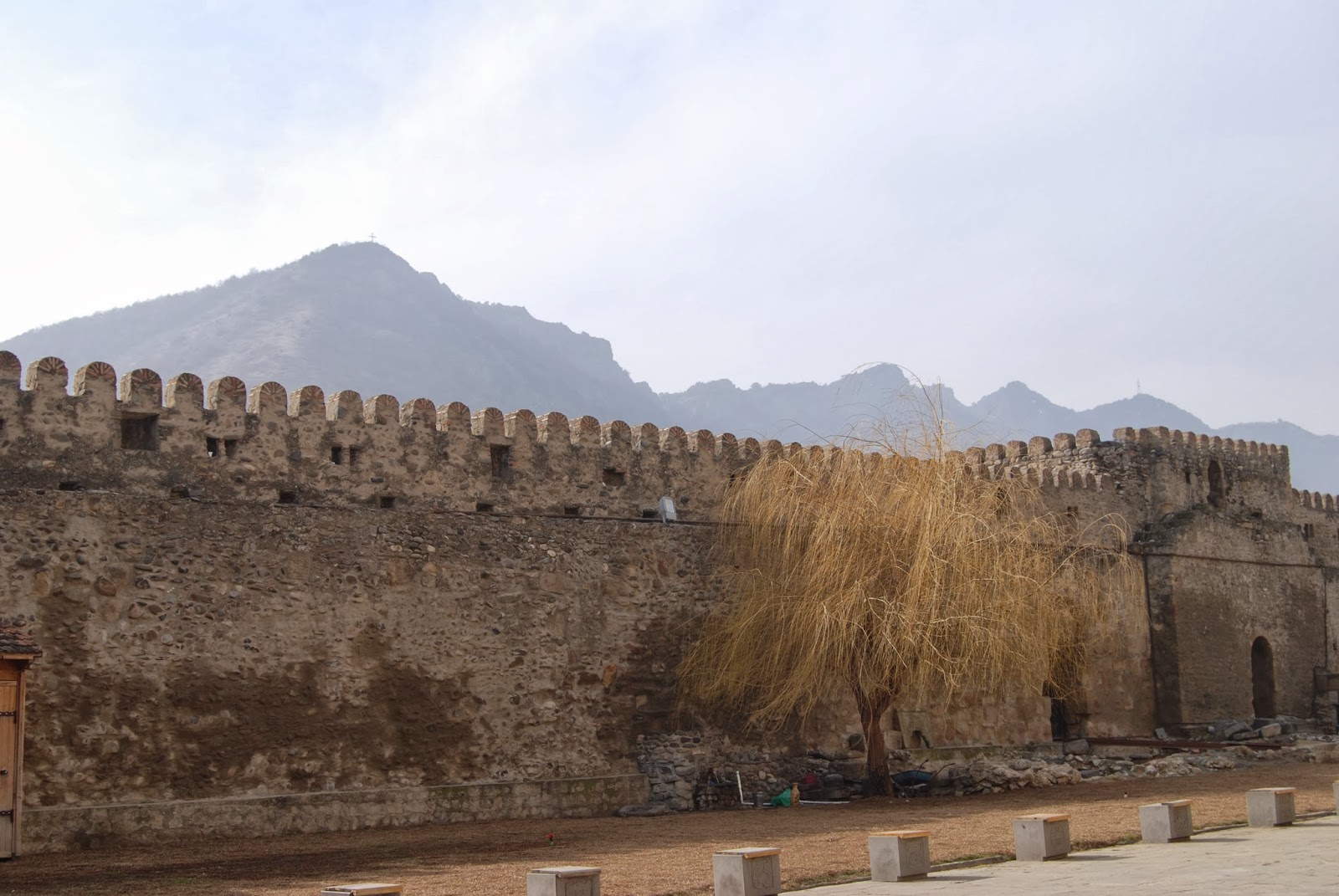 To get an idea as to how tall the cathedral is, I got the kiddos to pose. 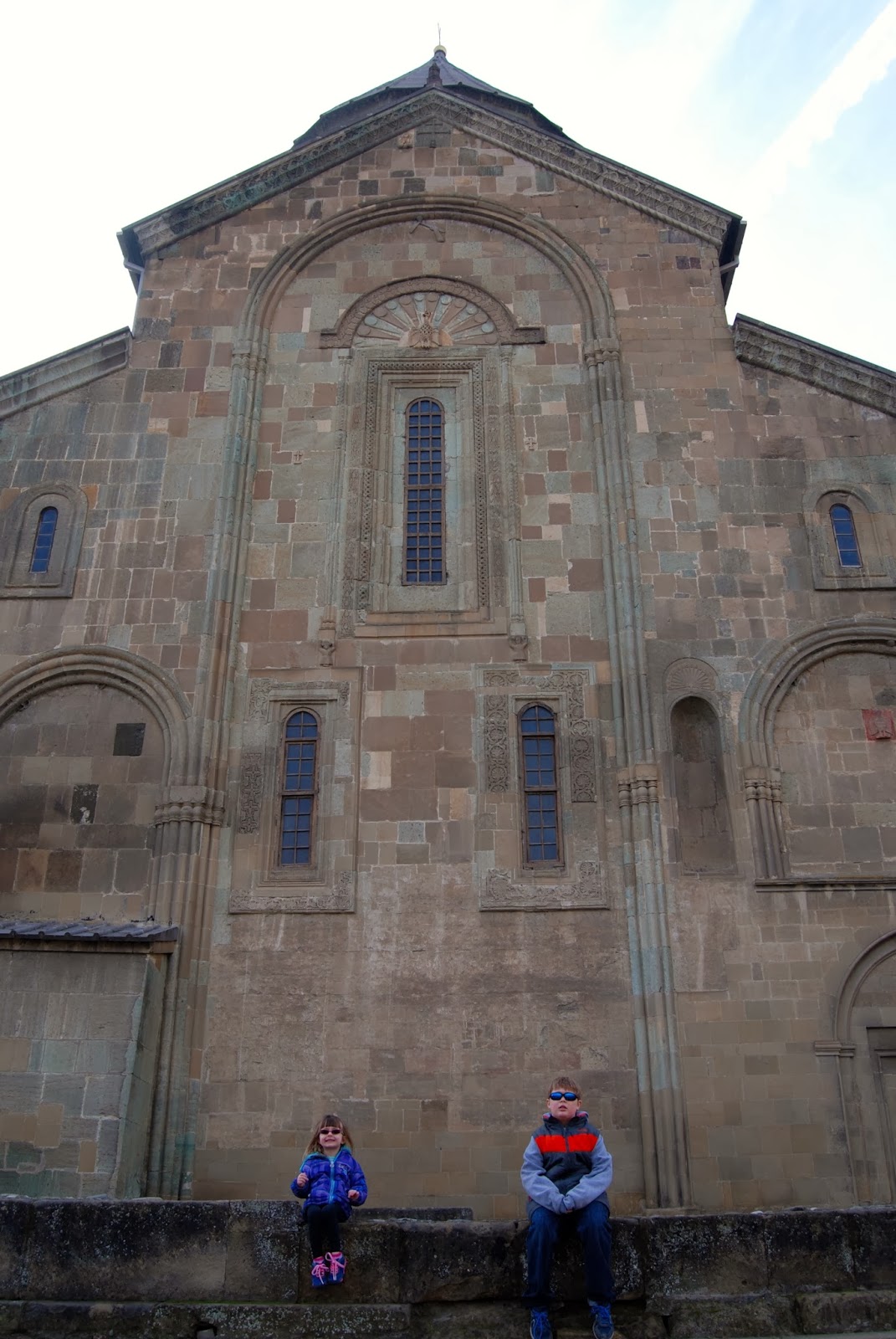 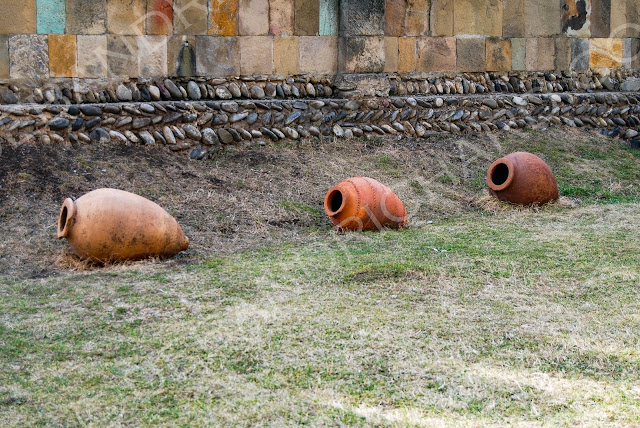 Afterwards we headed out to walk around a little more of the town....but first snack time. 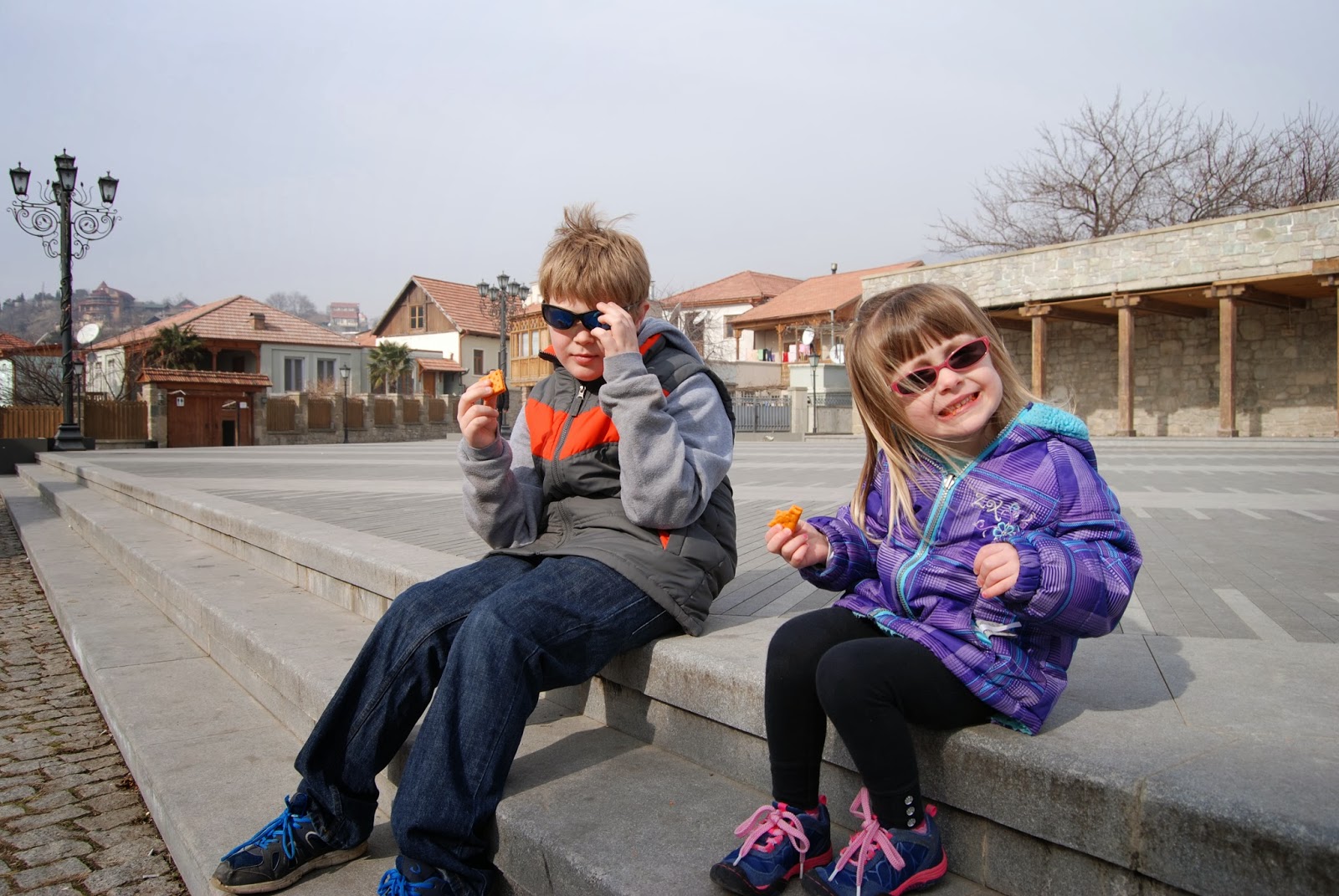 We walked past all the souvenir, wine, and snack shops. They have these white fuzzy hats that are something you try on and take a silly picture with, but not actually buy. So there were signs that said how much it cost to take your picture with the hat on, one guy even had a back drop of the Georgian Mountains during the summer. 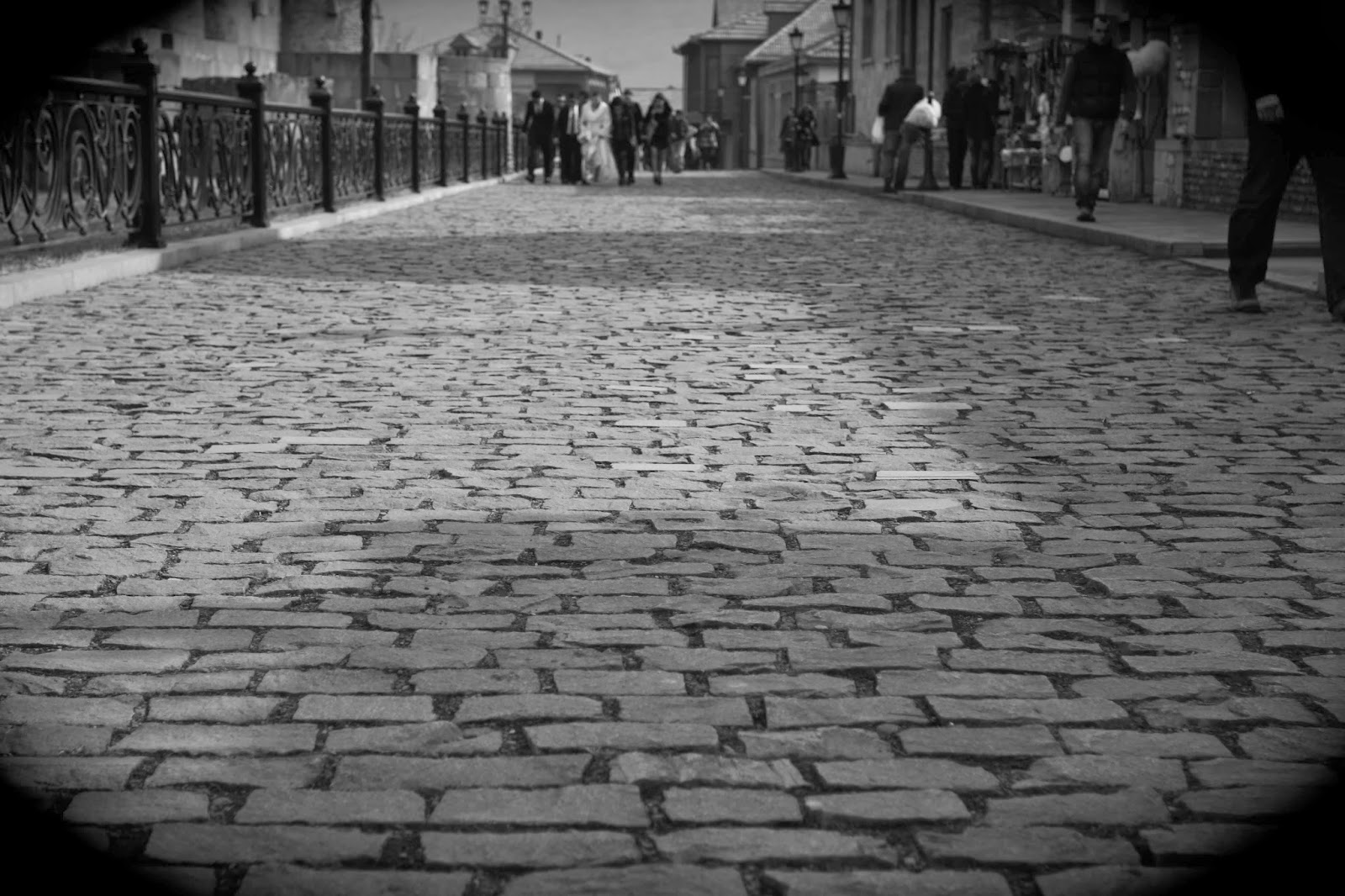 We past what looked like a couple heading to their wedding in the cathedral. We also walked down to the waterfront. 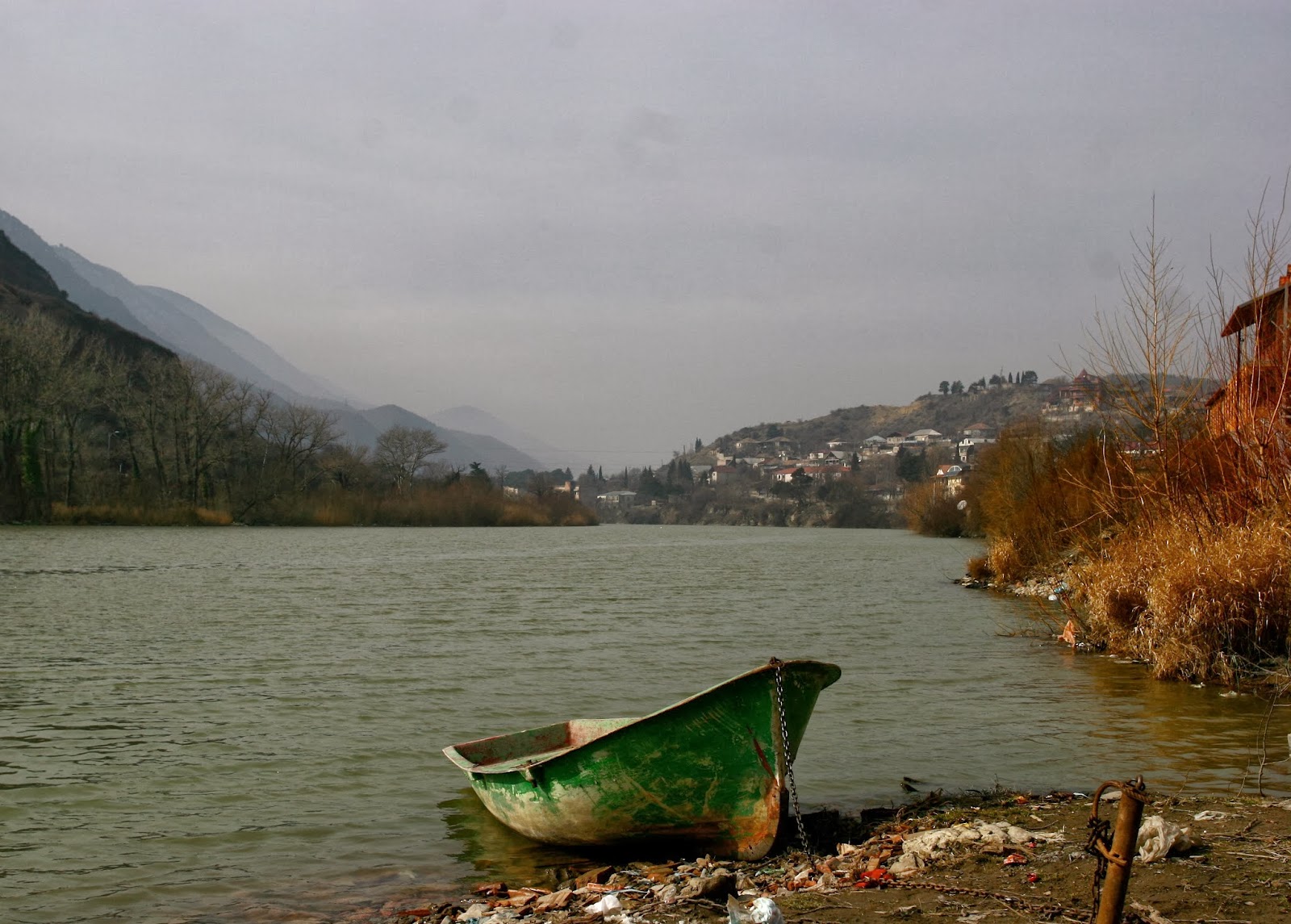 The rest of the town located on the hill overlooking the water.

Mason was thirsty on the walk out....I really hope this was truly a drinking fountain and not holy water or something religious..... 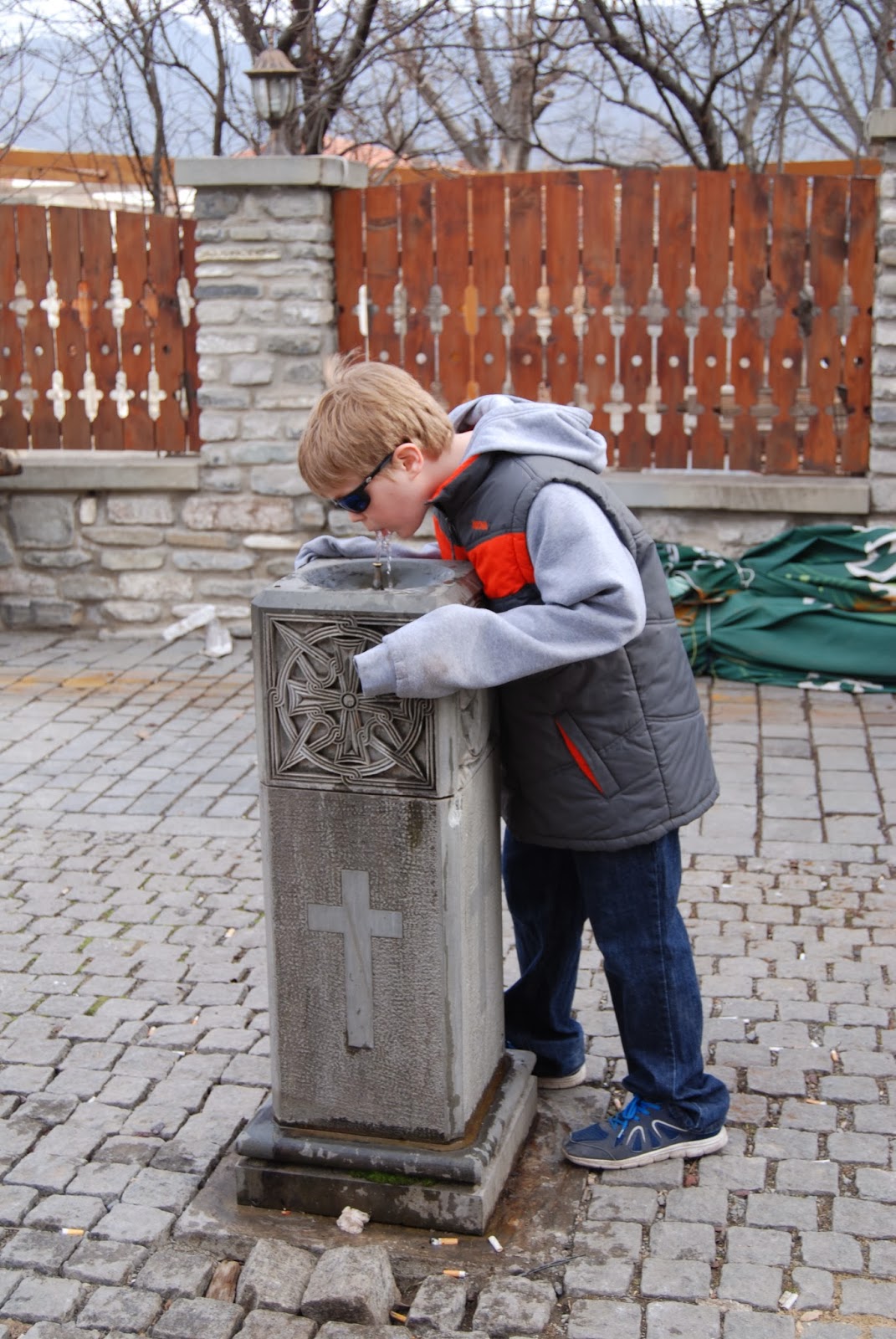 We definitely plan to visit again, likely when it is warmer and more restaurants are open. There is an archaeological museum which seems like it would be interesting. Next time we will possibly partake in some wine tasting. The urine colored liquid is cha-cha, which is essentially Georgian moonshine. 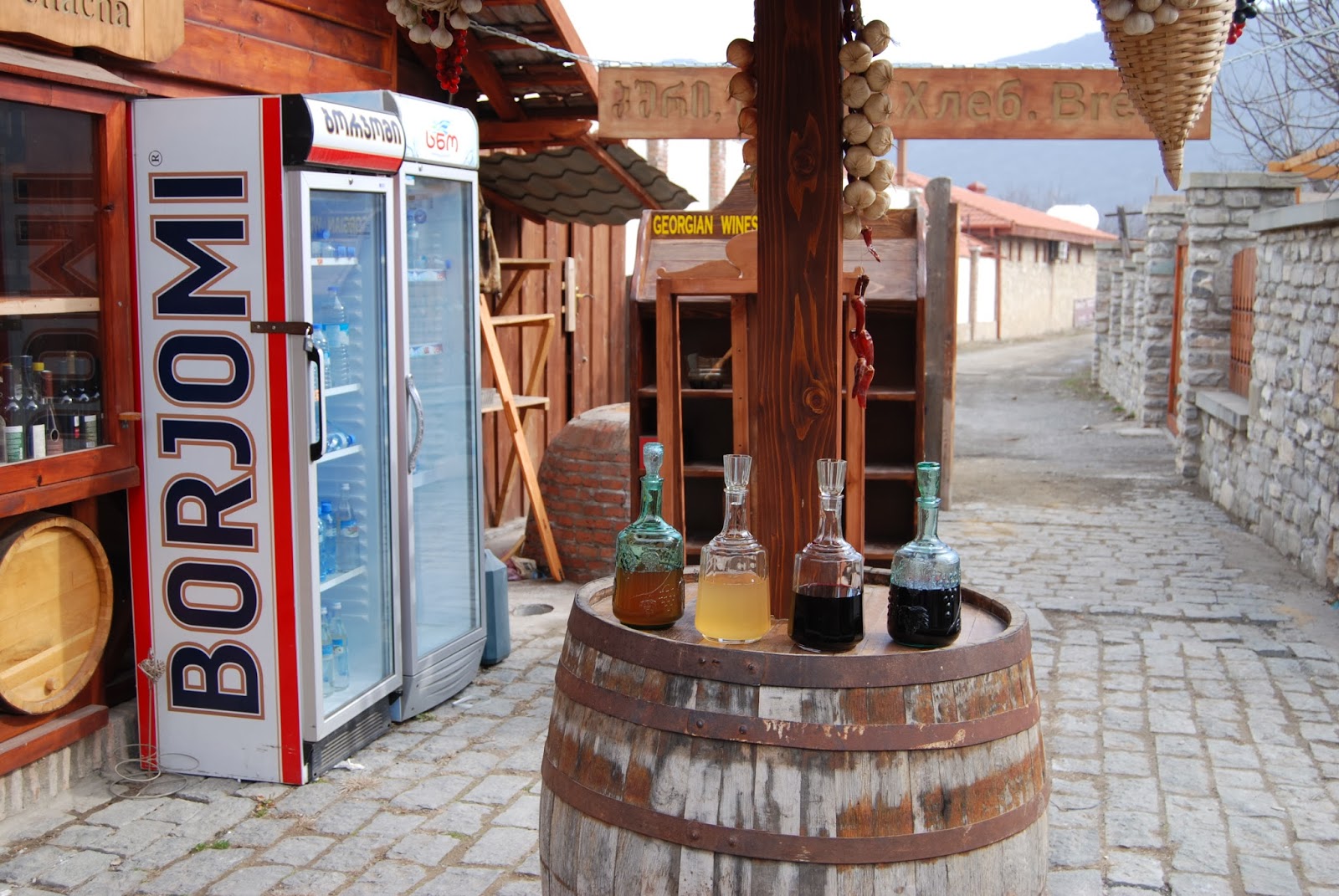