So there are laws every where...helps keep us civilized, which is always a good thing! There are some odd laws on the books! Thrilllist did an article recently listing the weirdest state law from all 50 states...they even link to the legalese....so no eating your contest frogs in California if they happen to perish or in Kentucky you can't sell dyed baby chicks in a quantity other than six or you could be fine $750+ if you fail to close a fence gate in Wyoming! Our own lovely, Charleston has an intersection referred to as the 'Four Corners of the Law' downtown. At this intersection there is a City Courthouse on one corner, County Courthouse on another, US Post Office/Federal Courthouse building on a third corner, and St. Michael’s Episcopal Church on the fourth corner....any law broken could of been taken care of in one of those four buildings back in the day! (I used to work a couple blocks from this intersection and have sat through hundreds of red lights here....yet I could not find a single photo....if I ever do I will edit and add!).

So while on the topic of laws....for our final transfer flights, we were victims of the 'Fly America Act'. You can click the link for all the legalese. Cliffnotes version, when on official travel we need to fly American carriers or a foreign carrier with a code share with an US carrier (as American carriers do not fly everywhere on earth). In March, American Airlines broke their code share with Qatar Airways....which meant we could not take the direct flight from DC to Doha....no 14.5 hours and done. Due to no code share, we could not take off from US soil on Qatar Airways....so we had to take either an United flight to Frankfurt, Germany or an American Airlines flight to London, England. Then, from either of those cities we would fly Qatar Airways the final leg into Doha (aka....we still ended up flying Qatar Airways as they are the predominant carrier in Doha). When booking, we were planning to have the cat with us and pets are not allowed to transit through the Heathrow Airport in London.....so Frankfurt it would be. Now our flight time would be DCA-FRA 8 hours plus FRA-DOH 6 hours. There was about a 2.5 hour layover, but with the cat we discovered she could not be interlined transferred. What does that mean? We would need to exit security, pick up Isa in her carrier from the cargo area, recheck her with the new airline, and get back through security....not something doable in 2 hours (international pet pick up in cargo is never quick). So we would have to take the evening flight at the earliest....making for about a 12 hour layover.  So our transit time had gone from 14.5 hours to 22.5 hours.....which entitled us for a rest stop. So overnight in Frankfurt it is (you can only power on for so long and when traveling with kids, they have a lower threshold)! In addition, unless you get a huge suite, most European hotels limit the number of people per hotel room to three and we were a party of four....we would be required to get to two rooms. Less you think we were trying to waste tax payer money, we did put in for a waiver since the flight with connection was more expensive (plus the two reimbursable hotel rooms). The waiver was denied since cost/time is not considered a valid justification. So that is my two cents about a crazy law where I understand the point (supporting America carriers)....but there should also be a common sense override option....two days of travel vs one and less $$. 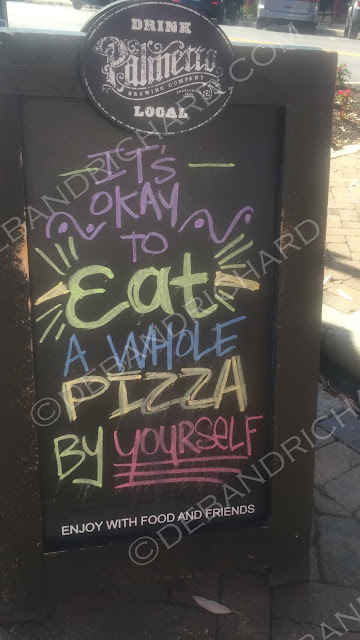 Anywho, back to our adventure! We had our last meal stateside....EVO Pizza! The one place everyone craves, usually our first meal out (and many in between), and typically our last meal before departure! Our flights to DC and Frankfurt were pretty uneventful. Richard and I even commented on how short the 8 hour flight was....we barely got any sleep as we were so used to the extra 4 hours on the flight to Fiji. Once in Frankfurt, we made it through the long passport kontrol line, retrieved our luggage, then headed to our hotel (it was connected to the airport). Our room would be ready in about an hour, so we had some breakfast and then made it up to our room to shower and get out of our airplane clothes. Our eyes were all so heavy....so very, very heavy! So we decided a two hour nap would be best. We all conked out quickly and then I had to drag everybody up after the alarm went off....but to get over jet lag you have to power thru. We decided to walk back over to the airport and head to their food court/shopping area (outside of security). We had a meal, looked around some shops, and then after seeing some signs decided to take an airport tour! 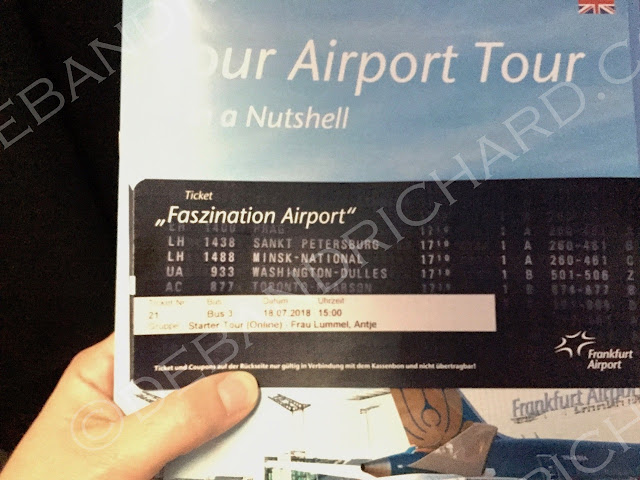 What is an airport tour??? We had no idea either....but why not check it out. It will give us something to do and help keep us awake. So the tour was held in all German...so we didn't understand that, but if we asked specific questions they would be answered for us in English. So once we were screened through security, we hopped on a bus that toured us around the tarmac, we saw the planes, the fire station, fueling station, the cargo hangers, and lots of other stuff (but unfortunately we don't speak German so I can't tell you what it was).

We saw an Air Canada Dreamliner. The Dreamliner is currently manufactured in North Charleston (near our old house) and we saw many take their first test flight....was this one of them? 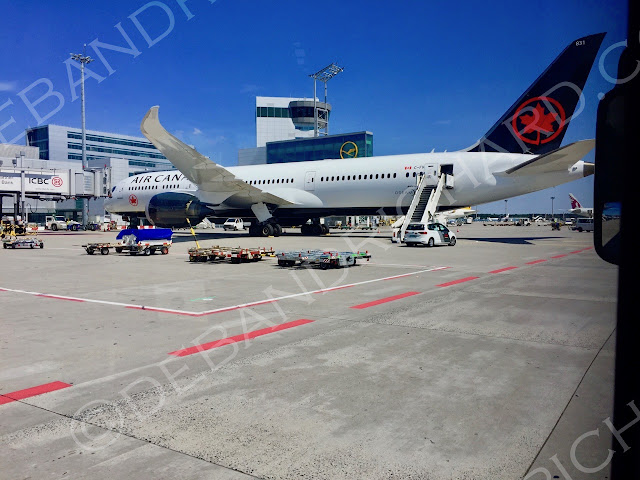 Pegasus Airline is a Turkish airline. Though at first glance, it appears their plane says 'fly pigs'...always good for a laugh as it reminds you of all the things you get to do 'when pigs fly' as the expression goes! 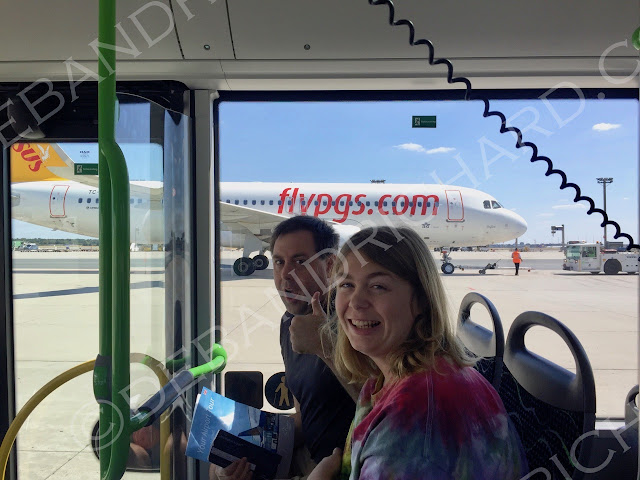 One of Emirates Airline's A380 - largest jet liner in the world! Seriously not sure how this two story beauty defies gravity and gets off the ground. 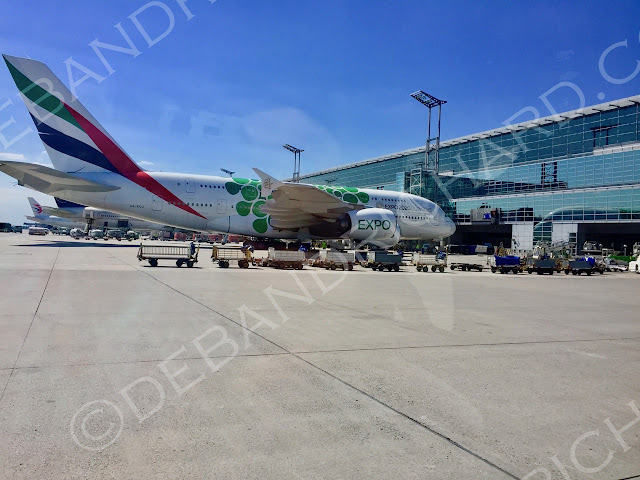 There is the type plane we would be flying the next day, a Qatar Airways 777. 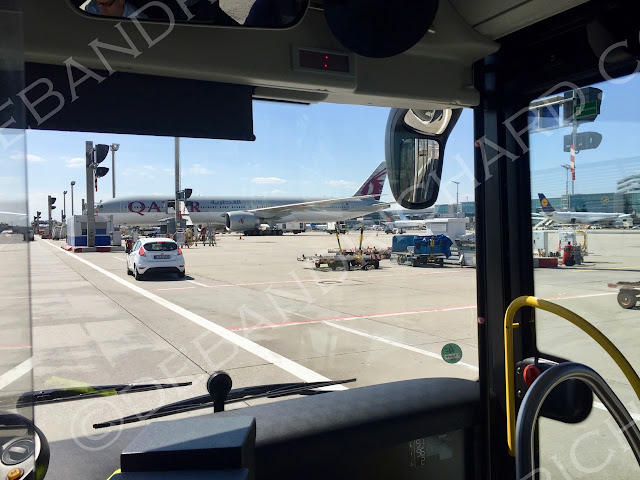 Maybe it was sleep deprivation, but this stop for crossing jets sign just cracked me up every time we saw it. Naturally, I had to take a picture to share it! 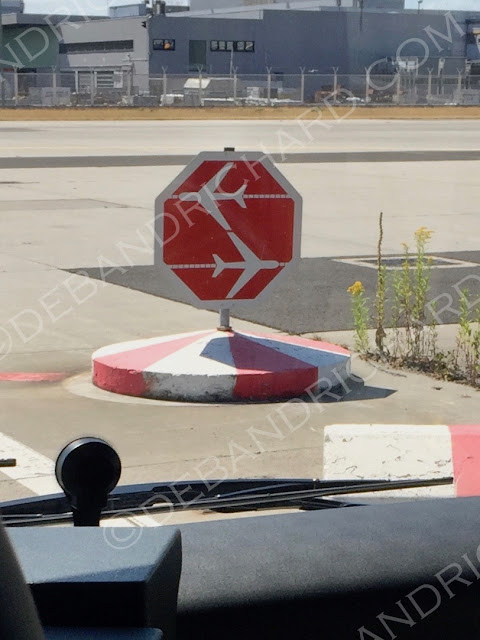 After our tour, we had some Starbucks (still in deprivation from 2.5 years without it mode) and then opted to just relax in our room. We watched the Big Bang Theory in German. It was an episode we had seen on rerun a couple days prior, so it was oddly amusing....we ordered some room service and I think we all managed to stay awake until about 7:30 pm! The next morning, we took the long walk across the road and checked in for our flight to Doha. Another pleasant flight, though since we were flying during the day we didn't try to sleep, we just watched movies and played on our iDevices (I personally read a good bit of a book). We arrived in Doha around 5:00 pm....the airport is so bright, clean and sparkly compared to the Fijian open air airport we were used to sweating in....lol. Trying hard not to compare everything to Fiji, but it happens.

Less you think we forgot about Isa Lei. When we started thinking about poor little Isa....an 8 hour drive back to Charleston, boarding while we were in St. Louis, then a flight to DC, we would need a bit of a layover to change carriers, then take 2 more flights, with a possibility of missing a piece of EU paperwork to allow her out the airport in Frankfort for the overnight stay/or back on the plane for the last flight.....eekk! So we opted to board Isa in DC and use a pet shipper to send her on the direct flight. Isa arrived in Doha about 2 hours prior to our arrival. We weren't able to pick her up from the main terminal. So an embassy rep/our sponsors that met us at the airport took us and our 8 suitcases to our house, then the rep and Richard returned to the airport to get Isa. The kids and I got Isa's food/water ready, her litter box all set up, and I found the pet shampoo in the luggage. About 3 hours later, Richard arrived home. We gave Isa a quick bath and then she ate. By this time, it was close to midnight, so we all headed to bed. The next morning, Clarissa and Isa got all caught up on! 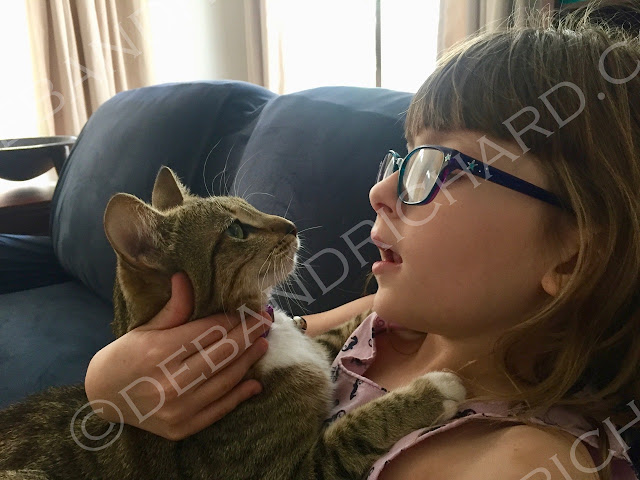 Email ThisBlogThis!Share to TwitterShare to FacebookShare to Pinterest
Labels: travel