So it had been nearly a year since my epic Father's day weekend fail. I decided to play my Mother's Day card and suggested we attempt the trip again. This time we were going to go a different route, only go for the day and set the tour up with the driver we know from our days at the Grand Pacific Hotel (so it was with a tour company that regularly works with tourists....so better odds of a smooth trip). We had the trip all lined up to go the Saturday before Mother's day, then Tropical Cyclone Ella failed to get the memo that cyclone season in the South Pacific ends April 30th (silly global warming) and was heading straight towards Fiji.....as you can see on this track line put out by the Fiji Metrological Society.... 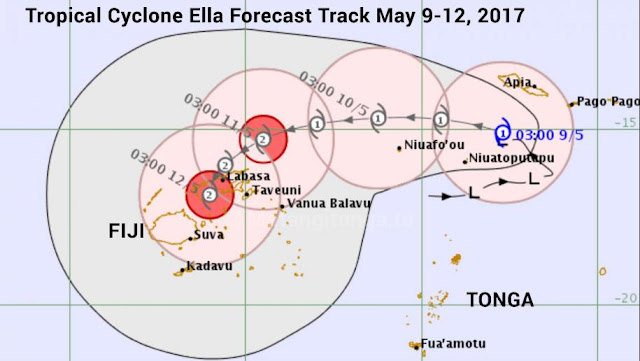 So since we were planning to go out on the 13th of May, if TC Ella would stay on this track line, it would not be a fun day. So we postponed our trip a week....which TC Ella heard....and so this is what the track line ended up looking like...also from FMS (don't you just love the unpredictability of severe weather systems!) 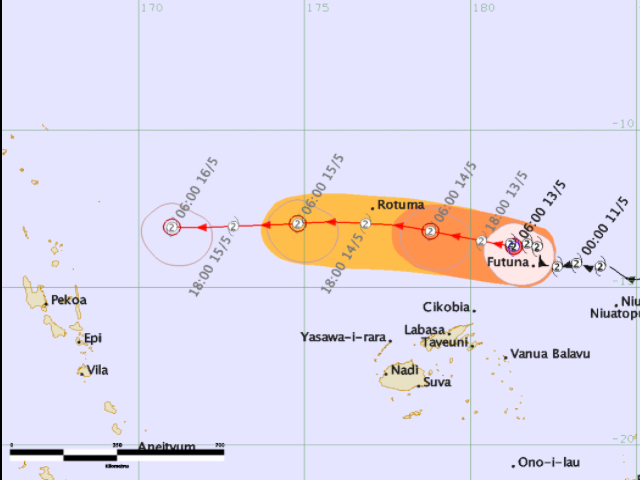 TC Ella still effected the Fijian islands of Futuna and Rotuma as it went by, but it did not turn towards to the two main islands as it was initially thought it would. We had a nice sunny day, though the forecast still did call for a wind advisory on the water. So we will never know if we made the right call, but better safe than spewy (with 2 sea-sick prone kids). The following weekend, we woke up to rain....but it always rains in Suva....so I had high hopes for good weather once up in Takalana. Which once we made it past Nausori (where the airport is), the sky began clearing as we headed towards the coast. Once we arrived, as customary with the day trip, we had morning tea and then headed out onto the water towards Moon Reef. Richard snapped this shot as we were leaving the beach, (Clarissa got a random nose bleed on the beach and of course in an effort to pack light I didn't bring tissues luckily the couple on the boat with us had some and kindly shared). 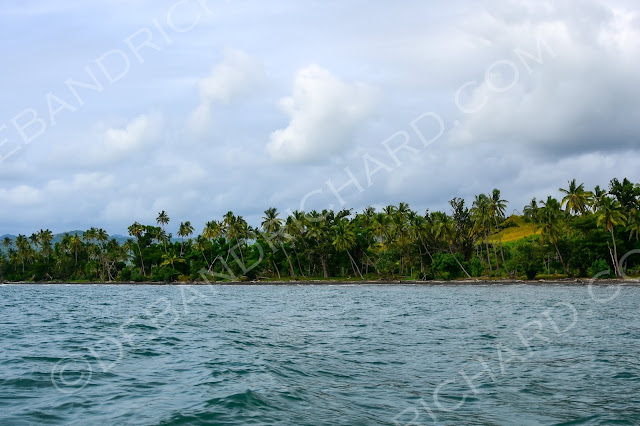 We had about a 20-30 minute boat ride through some choppy water, then the water got real shallow and the color turned from dark to light and we were on Moon Reef and dolphins were there (as were two other boats, so it was easy to find them). 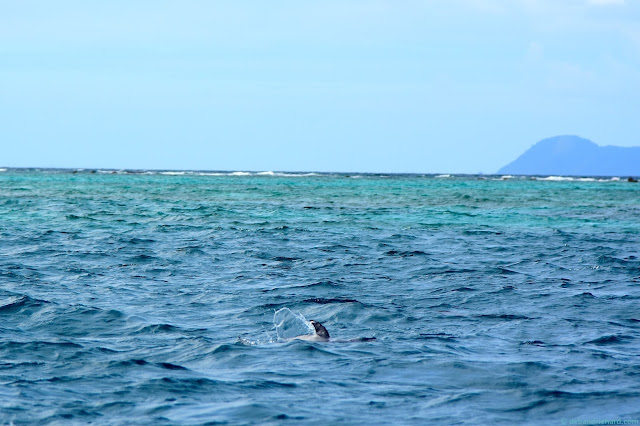 That dolphin is belly up with it's pectoral fins sticking out. The boat captain said we could go sit on the bow of the boat to take photos....so I did (I sat to the side and the guy with the other couple took some photos up there for a little bit but then he went back so I had that spot to myself). Richard took some video with the GoPro. I am very thankful for digital photography technology and went into photo-ID mode....lol. I took a little over 500 photos....there were a lot of dolphins. We estimated 50-70 dolphins on the reef. Here are a few of the better shots we got....sorry for photo overload, but living on an island for over a year and this being the first dolphins we've seen still blows my mind. On the flip side, I guess with the islands being so remote in the middle of the ocean maybe that is why there are so few compared to say the southeast US where it seems like you practically always see dolphins. 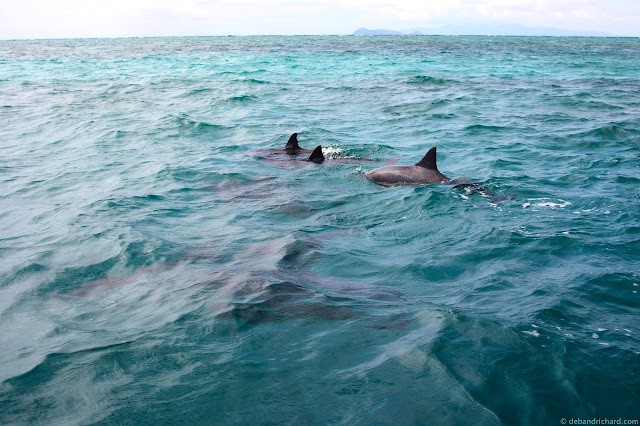 Note the small calf right by mom in the top right. 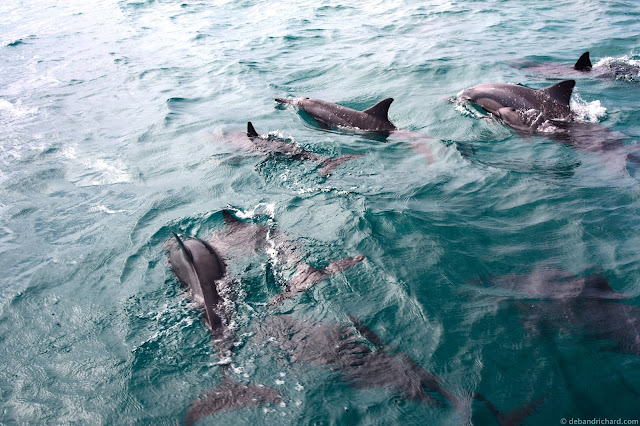 The population of dolphins that live on Moon Reef are spinner dolphins. They differ from bottlenose dolphins that I'm used to seeing in a variety ways. One way is they have a much longer/pointer snouts, as you can see here. 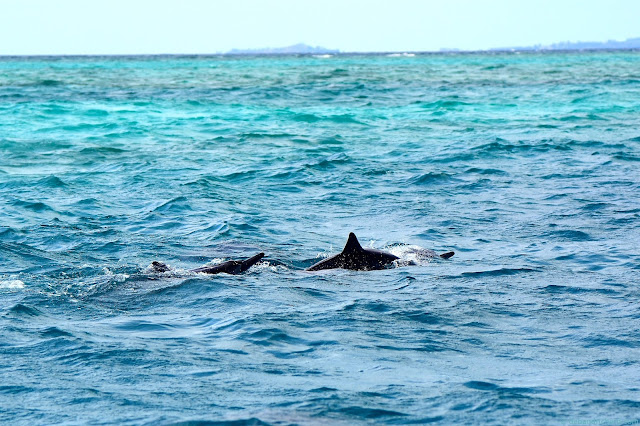 Though a bit blurry, I got worried when I saw this bright pink belly that we'd be having the "where do baby dolphins come from" talk on the drive home..... 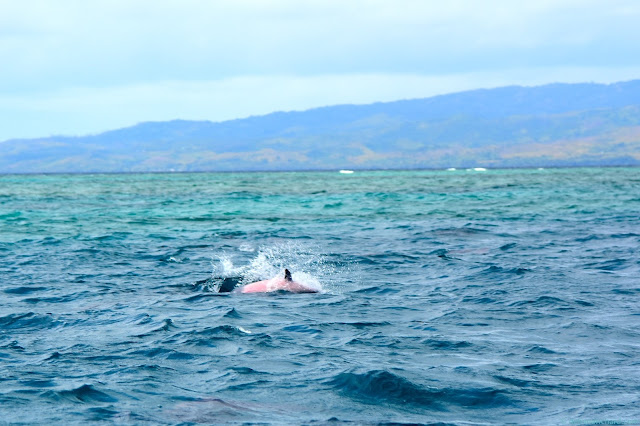 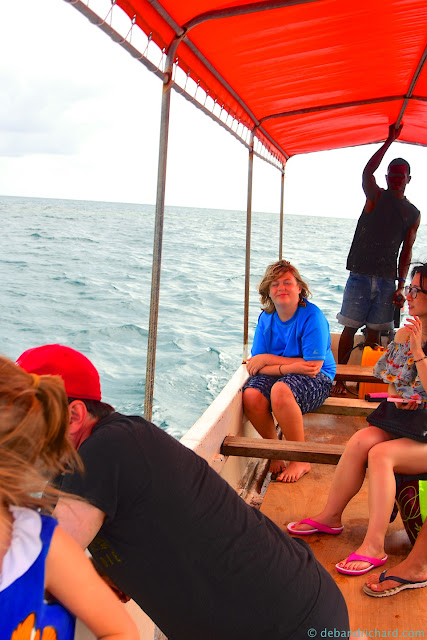 Look there are more! 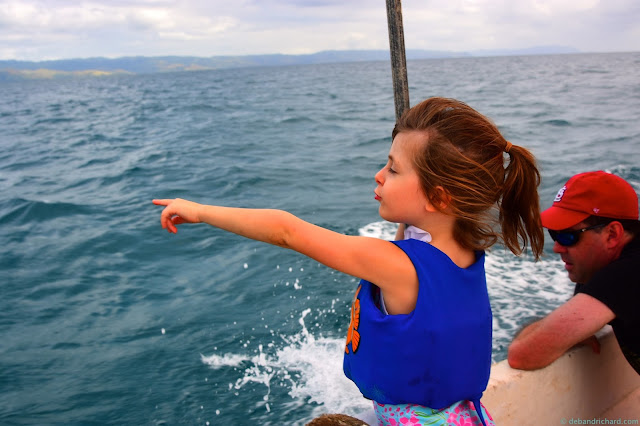 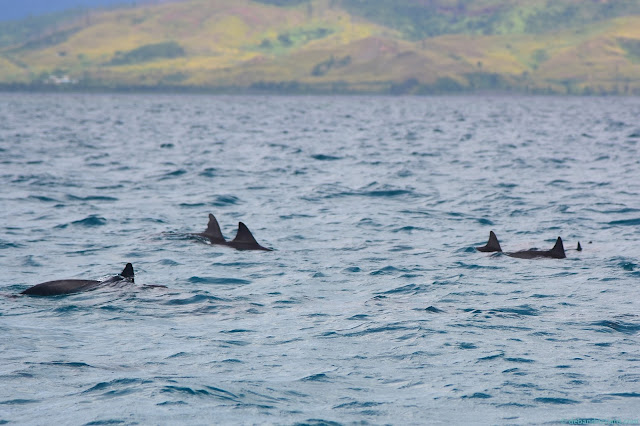 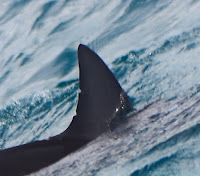 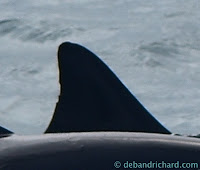 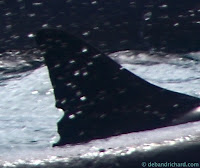 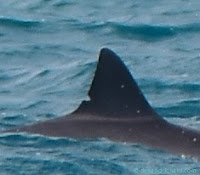 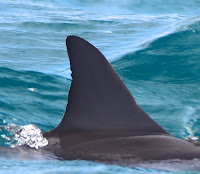 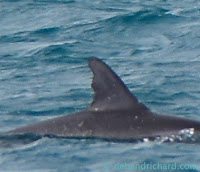 Some surfaced super close to the boat, which Clarissa loved! 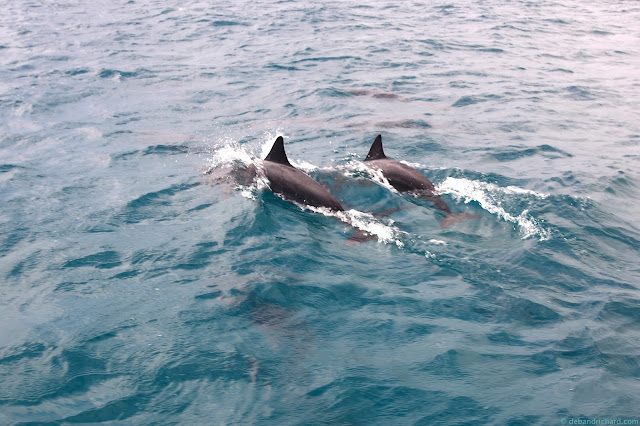 I think part of her, wanted to reach out and touch them...lol. 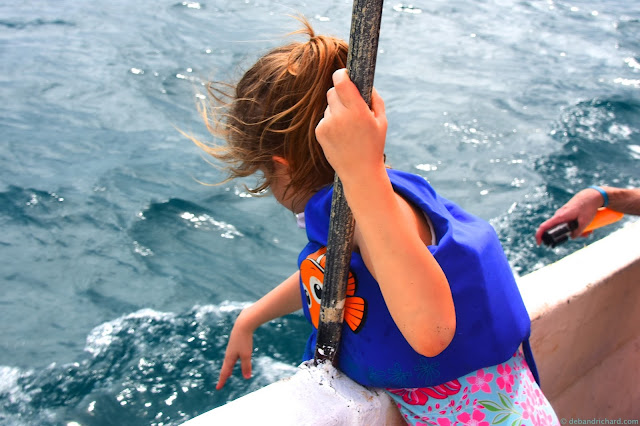 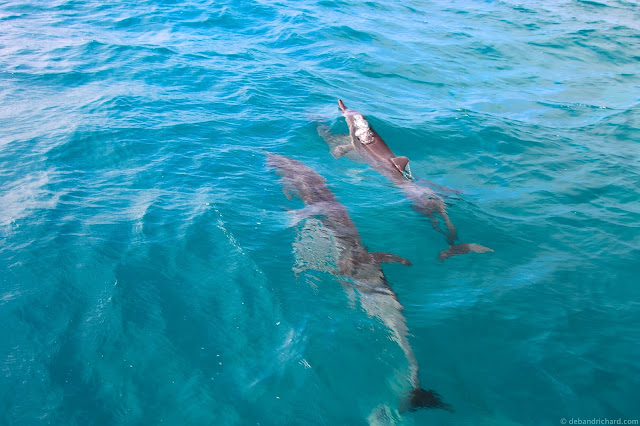 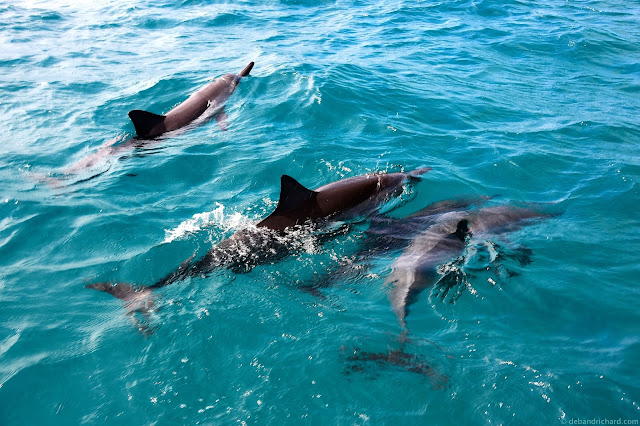 Here's the video Richard took....the boat was moving the whole time (and Richard needs to just grow longer arms...lol) so the camera comes out of the water a bit...but here is some of the best clips merged together....


I didn't time the sea sick medicine quite right with the kids (they hit the drowsy point too soon....oops) and were not super excited for the snorkeling portion of the trip (the boat moves away from the dolphins and over to a different area of the reef with great snorkeling). Mason didn't want to get in and Clarissa got in for a bit but the water was a bit chilly initially (it is almost winter) and she did not last long. Just on the other side of this giant brain coral there was a pair of cuttle fish....my first cuttle fish sighting in the wild! I totally geeked out when I made one ink...by accident (I was kicking down to try and get a photo and my foot splash sound on the surface made it ink!). 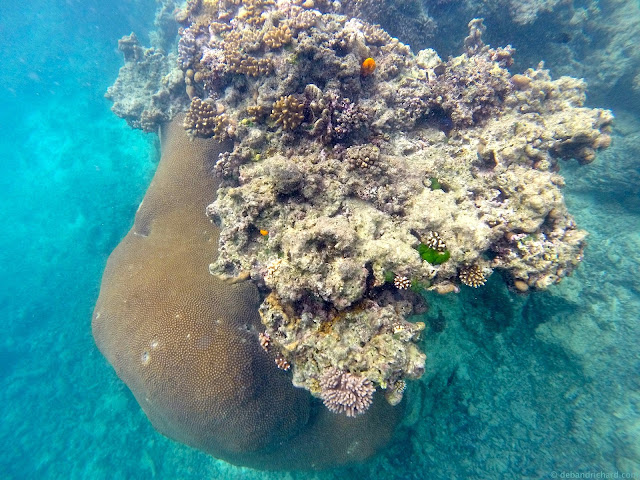 The cuttlefish were down right by the sand and the photo I attempted of them did not turn out good. Once on the surface, I reminded Richard he used to buy cuttlefish bones for his bird to peck on....and now he can say he saw the animal they came from. We didn't snorkel too long, since both kids were on the boat and the other couple didn't bring snorkel gear. On the swim back to the boat I saw a moray eel and filmed it for a bit. There was a decent current...so the video has a lot of camera shake....so I present you some screen shots of a friendly moray eel!! 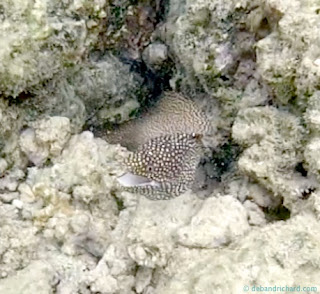 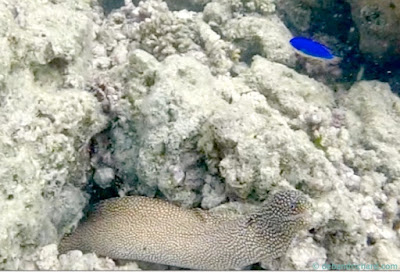 It seemed to be hunting a couple of these little blue fish, so it was really coming out of it's little hiding spot for me to film it. When I got too close with the camera though, it would let me know! 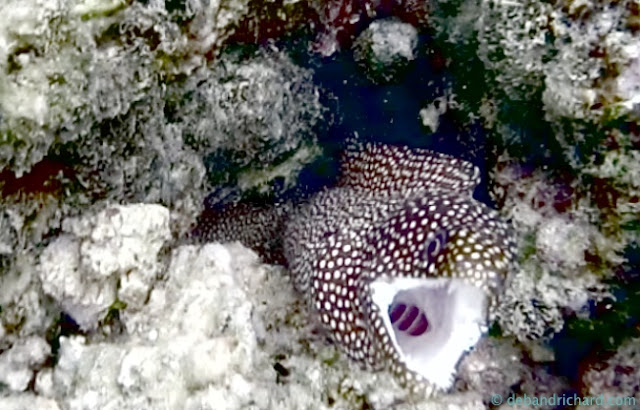 After snorkeling, the boat headed back past the dolphins again. Their behavior was different now, less socializing than before. More slow surfacing and traveling. We spent a few minutes with them and then headed back to land. 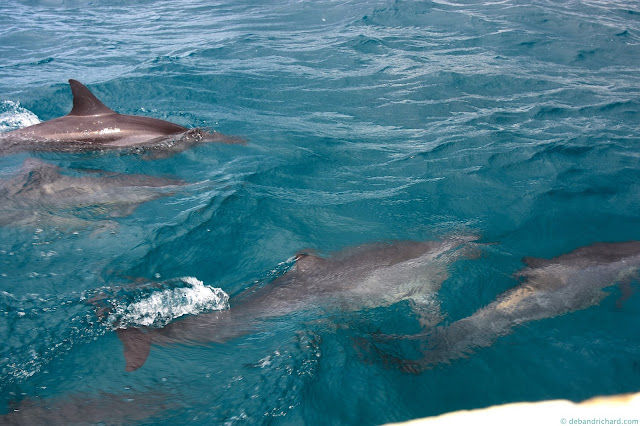 When back on shore, we changed into dry clothes (it was a wet trip back to shore) and enjoyed a typical Fijian lovo lunch (food is wrapped in leaves and placed in a hole in the ground, covered with hot rocks and banana leaves, then cooked for 2-3 hours). Clarissa ran around and played with the kids (we found it was the owner's boy Jojo's 8th birthday so he had some friends over celebrating). After lunch was over, we headed back to Suva. We really enjoyed our day! See Fijian Spinner dolphins ✓
Posted by Deb at 12:53 AM