As we were driving to Rotorua, I noticed signs along the highway said we were driving along the 'Thermal Explorer Highway'. So when we arrived at our motor lodge, hopped out of the people mover, took in a nice deep breathe of fresh air, and immediately heard complaining from the kids, I was not totally surprised. Just like South Carolina 'marsh fart', Georgian natural sulfur baths, Hawaiian volcanoes, Rotorua geothermal wonders....it seems anywhere Mother Earth 'blows kisses' to us earthlings it smells like rotten eggs. Our next morning, we got an early start to explore the heart of New Zealand's geothermal activity. We went to Wai-O-Tapu Thermal Wonderland! It is similar to Yellowstone National Park in the US, but ironically much more attainable for us to visit (since whenever we are stateside, we visit family/friends/doctor appts/etc and never make it out west). 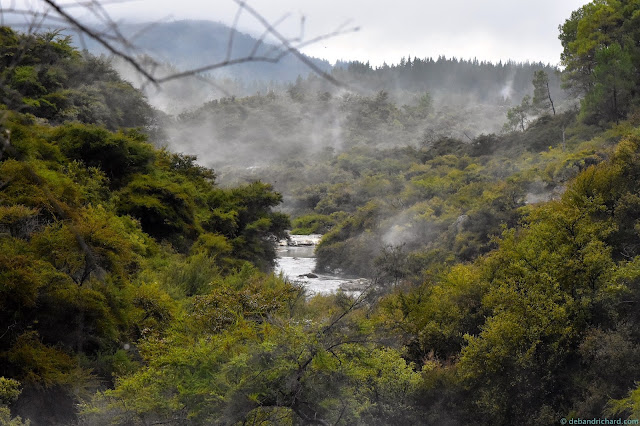 The fantail (the Maori name is pīwakawaka) greeted us as we entered the park. The fantail is one the few native New Zealand bird species and were were lucky enough to spot one. We didn't hear it's call, but it apparently sounds like a squeaky toy. The orange growth you see on the tree branches is a type of green algae called Trentepohlia. 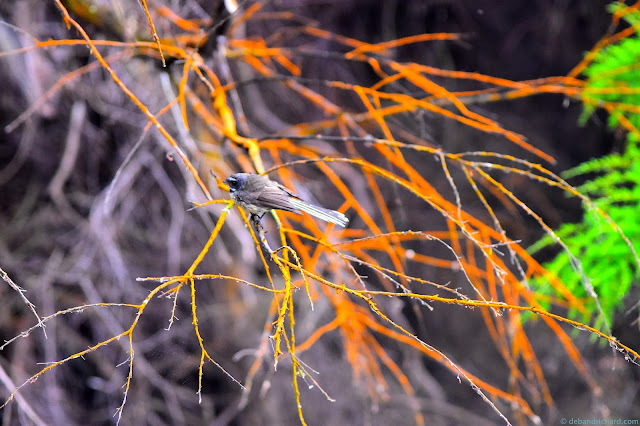 The Devil's Home was one of the first collapsed craters we came upon. 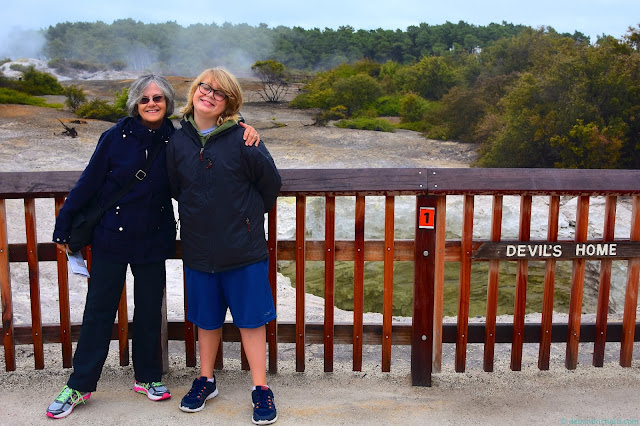 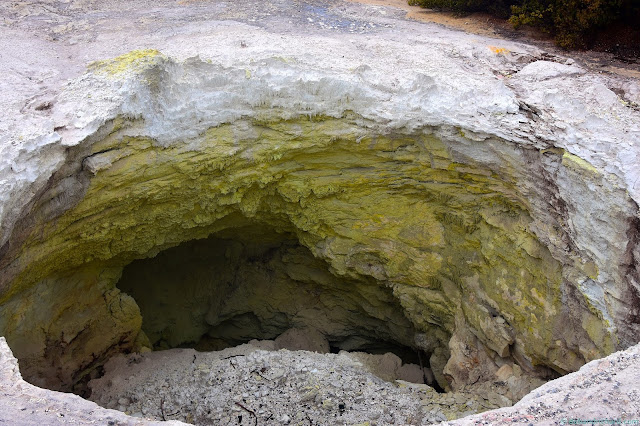 Lots of craters and constantly changing landscapes. You can see the recently exposed shrub roots. 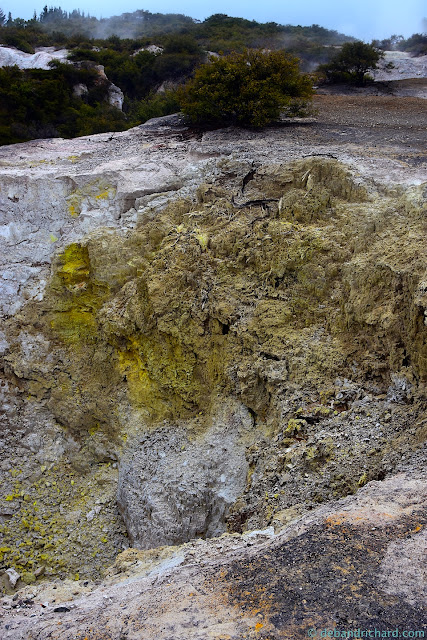 Aptly named Rainbow Crater. Due to the sulphur crystals and the "mineral veins exposed in the kaolin clay walls". The red-brown mineral color is associated with Iron oxide and some of the purplish areas are associated with Manganese oxide (the park didn't specify the charge on the metals and it is driving me nuts. By the way, all the info I'm giving you about the different compounds is from the park guide map). 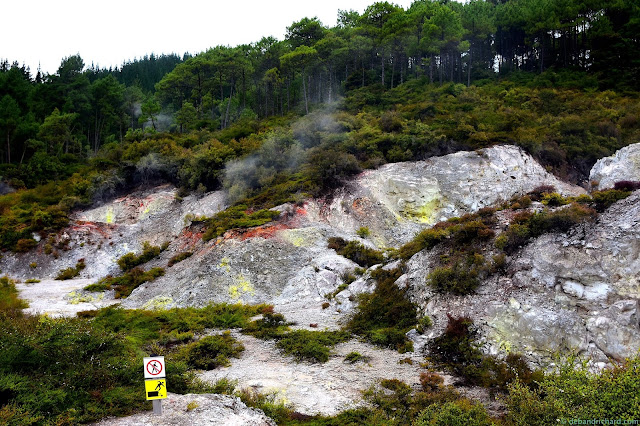 Another view of the rugged terrain. It was just neat and colorful and steamy. 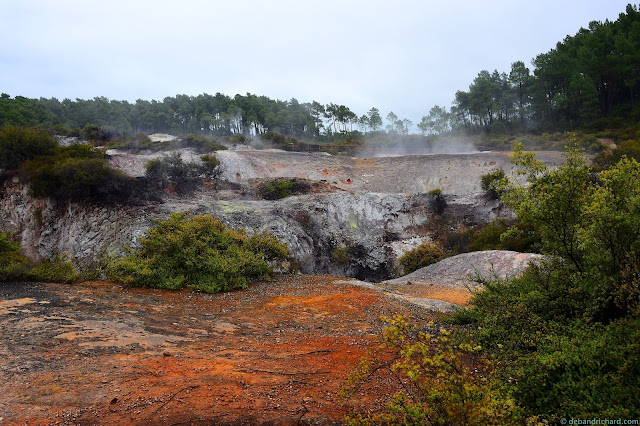 Warning us to stay on the trail....as the temperatures quickly rose when straying from the trail. 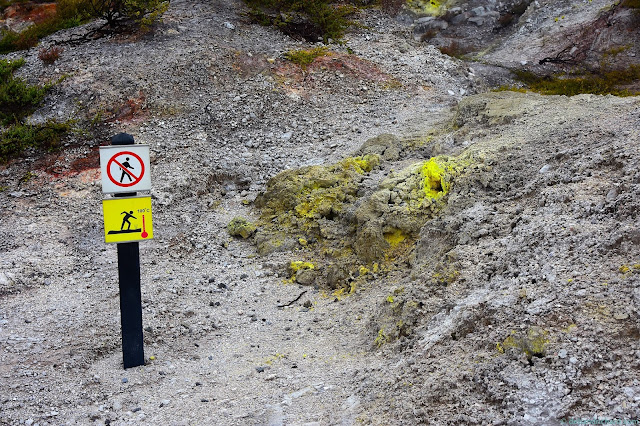 In case you were curious....the rotten egg odor was a little stronger here than in in town! 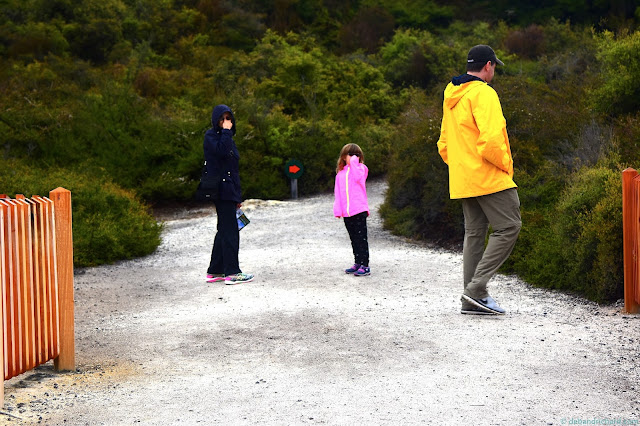 I think this is Thunder Crater which was just formed in 1968....so relatively new geologically speaking. 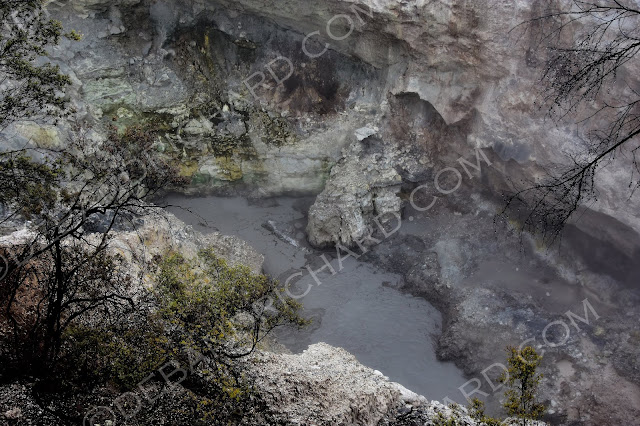 Devil's Ink Pots - a series of mud pools. The dark color is due to small amounts of graphite and crude oil being forced up to the surface by the water. 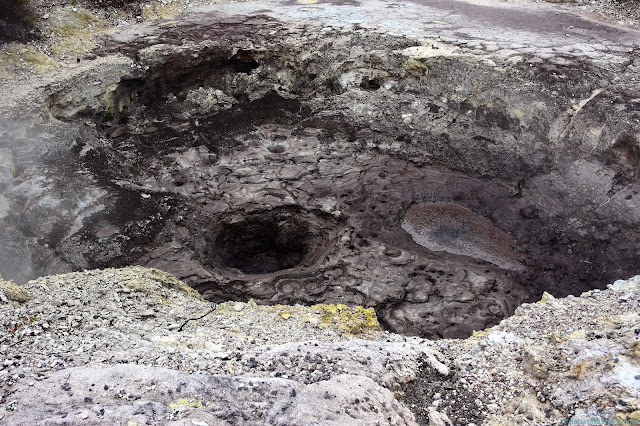 Artist's Palette - you see the steaming Champagne Pool, water overflows from the pool here and as the water cools the minerals are exposed to the atmosphere and present in a variety of colors. The colors depend on the water levels and wind directions. 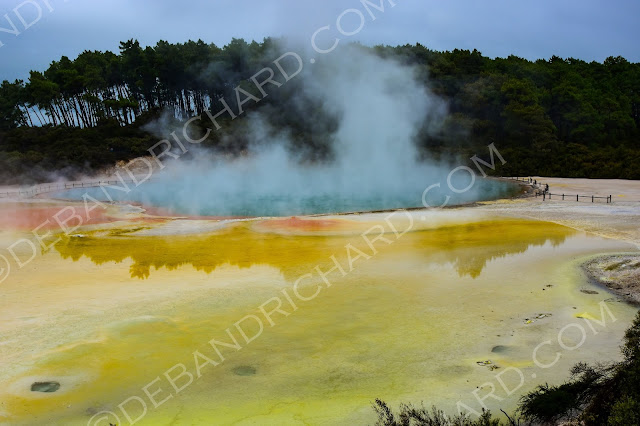 Rare vacation family photo with all four of us! Note the low bridge across the artist palette we will be crossing soon. As Clarissa said "the water is starting to creep me"...her current expression for freaking me out. 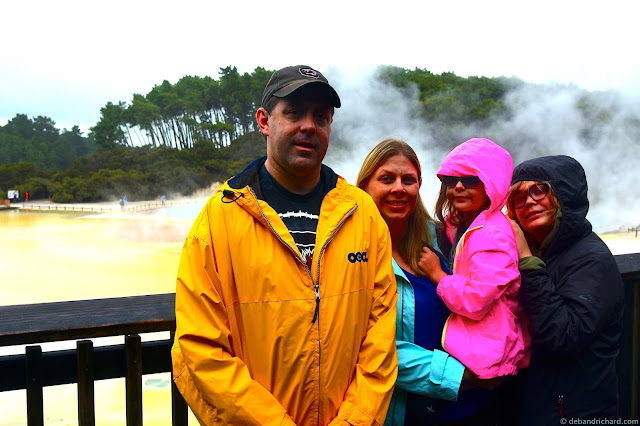 Opal pools - there is sulphurous spring on the edge of the terrace feeding the area and giving the pools their greenish color. 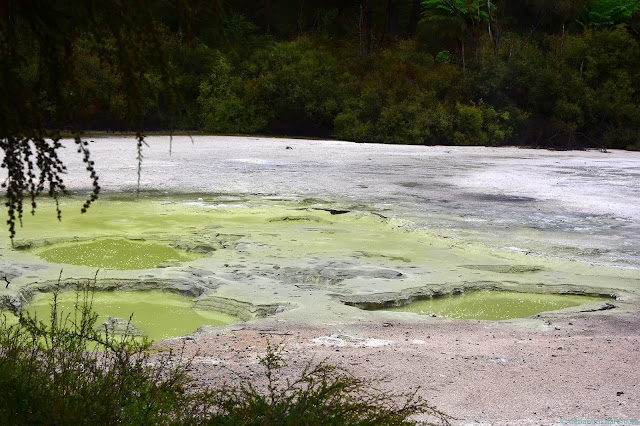 Ann & Jim in front of the Opal pools. 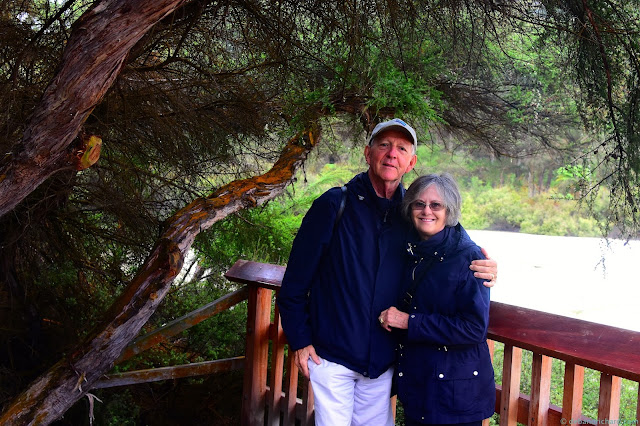 Due to the rainy/overcast/cool weather the Champagne pool was quite steamy, so it was not very photogenic at this angle....note due to grandparents being on the trip no kids fell into the 74°C water during the selfie taking/photobombing. 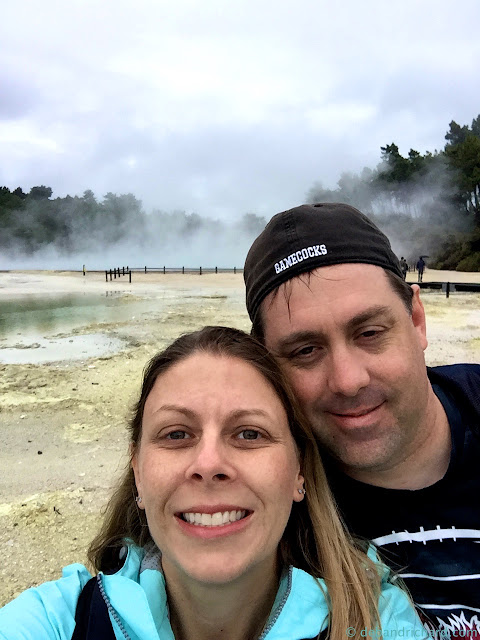 Up close, if you were patient and waited for a breeze to blow the steam away, you could quickly snap a photo and get a neat shot of the top of the embankment by the trail. It is full of minerals from the water that have been deposited, such as gold, silver, mercury, suphur, arsenic, thallium, antimony, etc. The bubbles you see in the water are due to carbon dioxide. 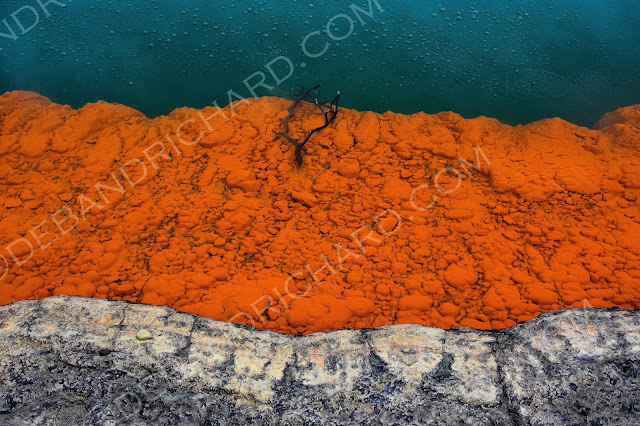 Another angle so you can see the orange mineral stretch is under the water. 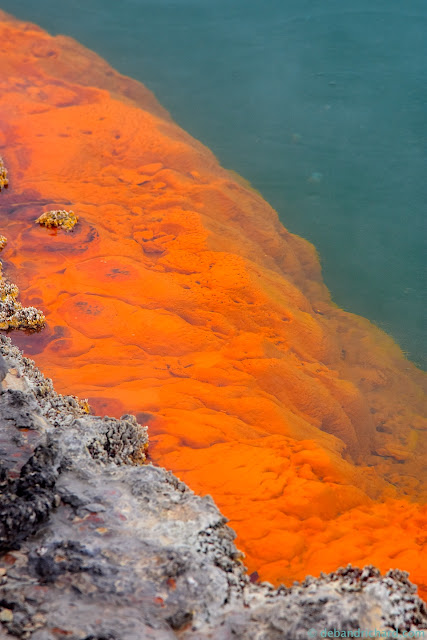 At this point the trail forked towards two longer trails. The rain was starting to come down a little more frequently and we had about 10 minutes to get to the big Geyser eruption, so we opted to bypass the longer routes. Hopefully the other things were not really cool....as we continued along, looking out of the park the tree line on a neighboring mountain was real cool looking. 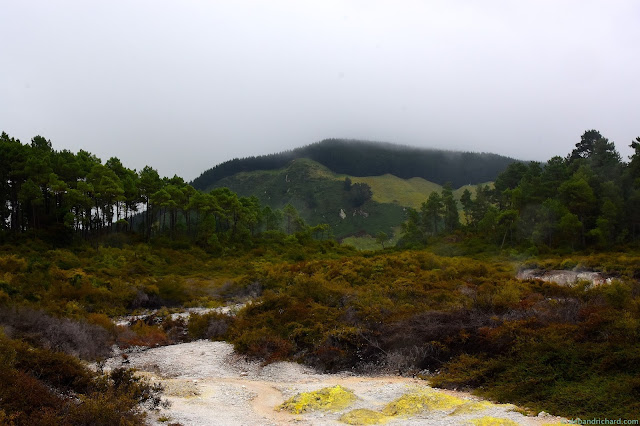 I just though the rock formations were very different/distinct here. 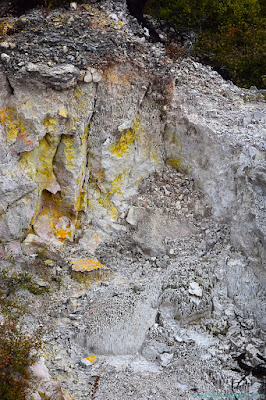 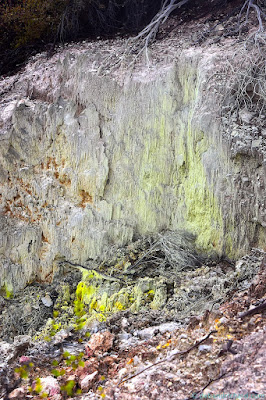 The kids were amazed at all the different colors in one small area, especially the rare purple. 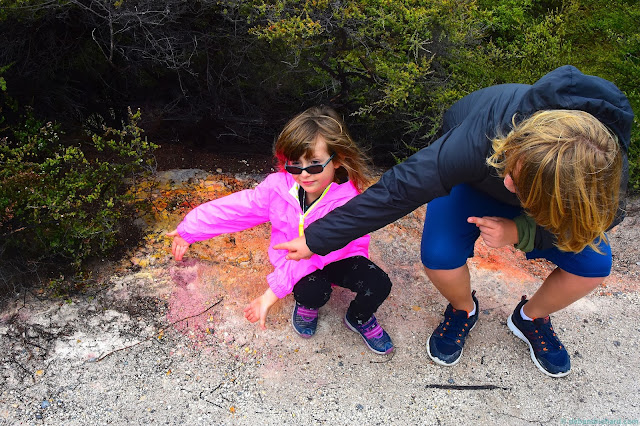 You should of heard all the wooooohs coming out of our mouths! The water was unnaturally highlighter green! I added people to the photos just for perspective so that you can see that they are normal colored so the water was that color! 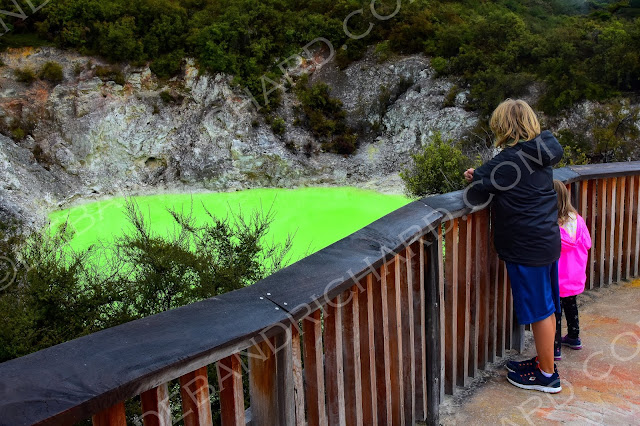 It is called the Devil's Bath and contains water from the Champagne Pool that has mixed with sulphur and ferrous salts. The color will change from green to yellow depending on the cloud cover....so rainy days...you get highlighter green! 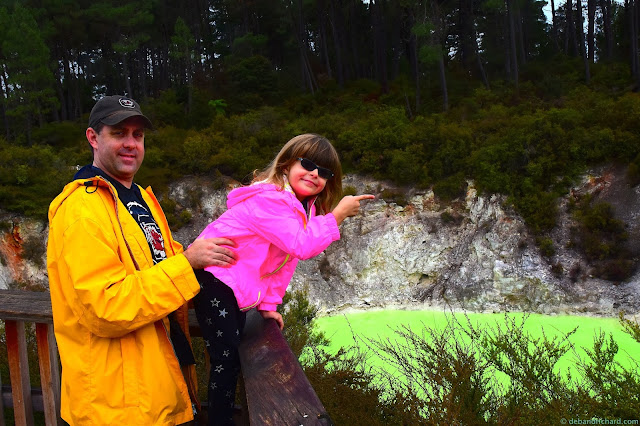 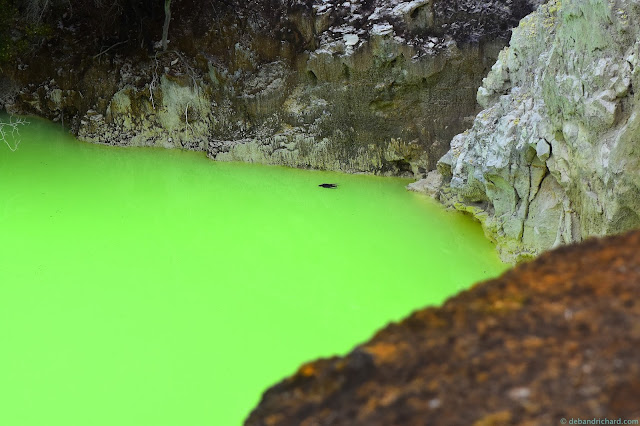 Yeah, we took a lot of photos of this crater because it was so out of this world amazing! 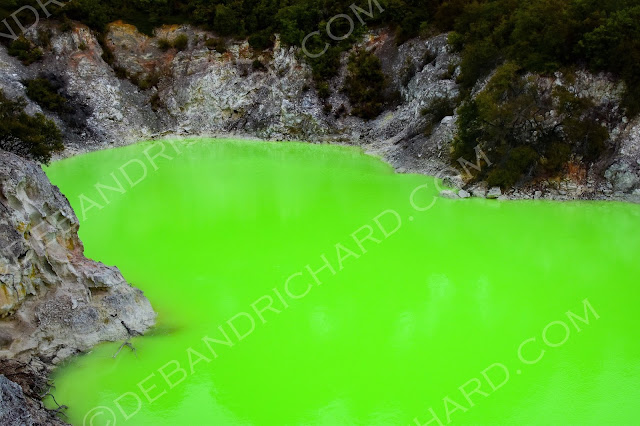 This was the last stop before the visitors center. We then had to get in the car and drive to Lady Knox Geyser. Everyday around 10:15 they have a presentation about the Geyser. 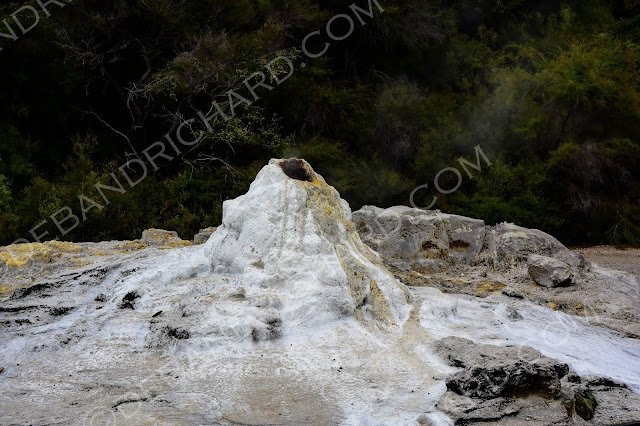 Apparently before this was a park, the nearby grounds were a prison. Where this geyser sits was a hot pool. The prisoners came to pool to wash their laundry. A few minutes after they started using soap the geyser went off sending their clothes flying into the air and the naked prisoners running in fear. The science behind it....the water towards the top of the geysers is around 100°C and further down the temperature is closer to 300°C (I think that is what the park ranger said....it's has been almost though....so if I'm wrong please don't get mad at me). The laundry soap broke the surface tension between the two water temperatures, relieving the pressure that had been building up, and immediately made the geyser erupt. Naturally the geyser will erupt every 36-48 hours. That does not do much for tourism, so every day at 10:15 a park ranger tells the story of the prisoners, who the geyser is named after (the daughter of Governor Knox), and then explains how they placed some rocks to help direct the geysers eruption and how they use an environmentally friendly soap to pour down the geyser to break the surface tension. He then pour the soap in, stepped aside, and about 3-4 minutes later:


The geyser can get up to heights of 20m depending on how much water has built up in the last 24 hours which can vary day to day. It was raining while waiting/it was erupting, hence the umbrellas (not from the geyser itself).