That one Halloween......I made the kids Halloween costumes! Yep...(just don't look too close, they aren't perfect). As I mentioned in the Hawai'i posts, we picked up portions of Mason's costumes and fabric for Clarissa and her gang's costumes.

Clarissa decided she wanted to be Bubbles from the PowerPuff Girls. She's been a fan since before the reboot (thanks Boomerang!). When Clarissa first tried on her costume, she looked at me and said 'I can't really fly?!?'....so I walked around as the Professor with a bottle of 'Chemical X' to explain why they couldn't fly yet...lol. 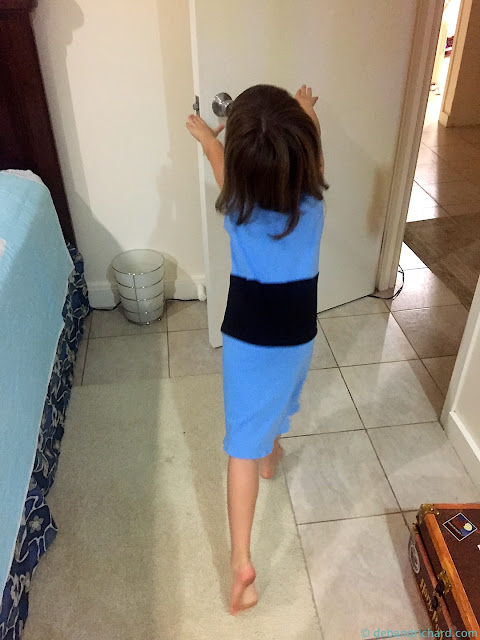 Given the PPG are Kindergarten-aged....which so is Clarissa....it would be perfect (and insanely adorable) to recruit two other friends to dress up. So she found two other friends to be Blossom and Buttercup! It was like wrangling cats to get a photo of the three of them.....and then they heard music and started dancing...so this is as good as I got! Then they were off to gather candy. 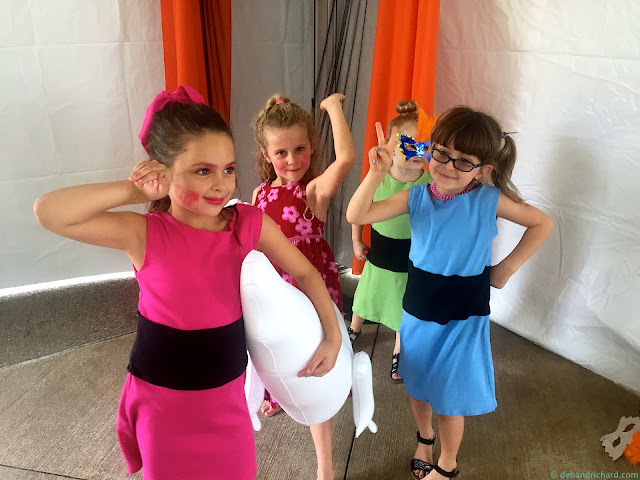 Mason is re-reading the Harry Potter Series for the second time (he read them back in 4th grade). He has gone onto Pottermore and was sorted in Hufflepuff. So he wanted to be a Hogwarts student (especially given he is the age that kids typically get their Hogwarts Acceptance Letters) and therefore, needed his house uniform. 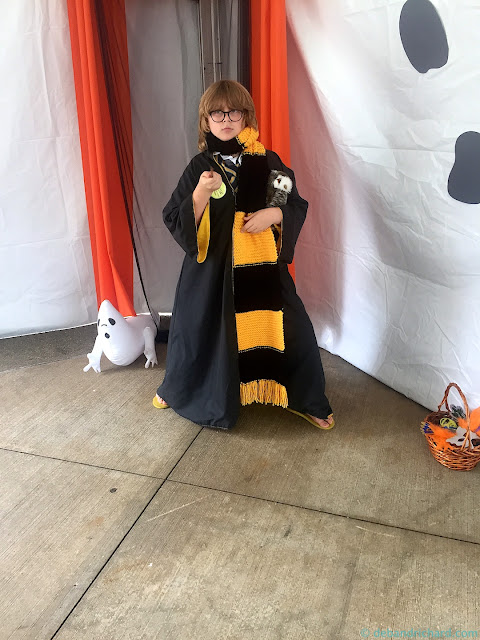 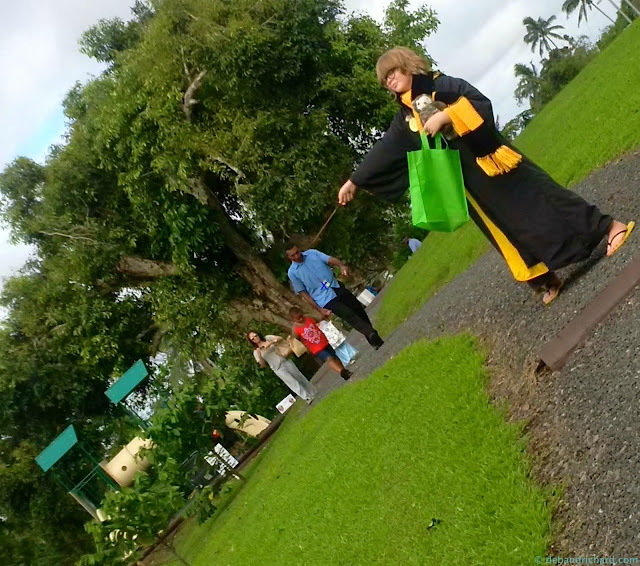 Given we live in Fiji, we had to modify it a bit or he might have a heat stroke! So in Hawai'i, we found a white (short sleeve) button down shirt and a blue and yellow tie (apparently the thick/vs thin stripes are opposite of what they "should" be). He also made gold and black flip flops. At the fabric shop we found the clasp for his robe. Here in Fiji, I found some black and gold fabric to make his robe, which was relatively easy. I ordered his Hufflepuff patch and the yarn for his scarf (that was the only the thing I couldn't talk him out of). He also agreed to wear some gray shorts he already had and viola..... 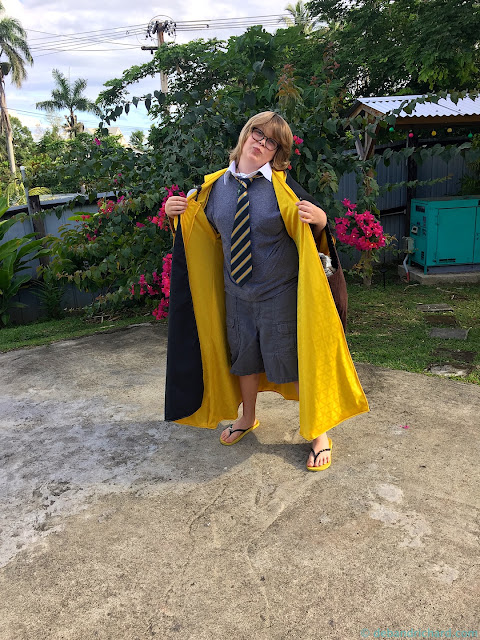 We had multiple events to go to (one Clarissa was sick for and we didn't end up making it to) and she was fine using other dress up things she has to wear to it. There was also one street made up a few Americans and Australians that will give out candy for Trick or Treaters. So we went over there on Halloween. Given we don't live there, I brought some candy to give out too (some Mom's got some nice chocolate to hide from their kids/I was a mobile "house"...lol). Mason wore his Hufflepuff uniform again. Clarissa wore a vampire dress she had found at the Goodwill store in Hawai'i. She did all her own make-up.....I'm not quite sure where she learned about vampire blood running down their chins....but kuddos to her handiwork! 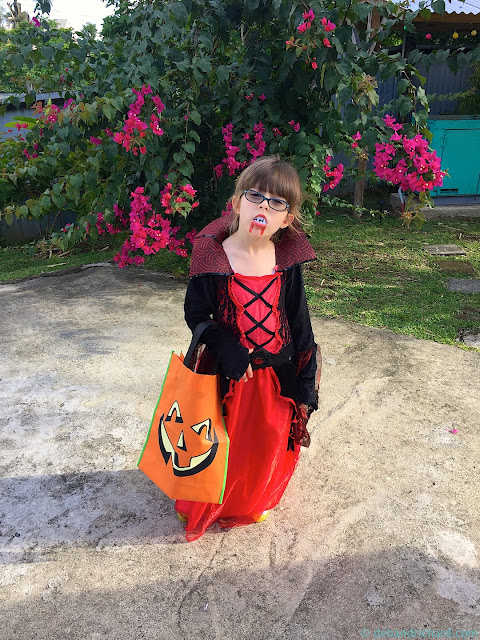 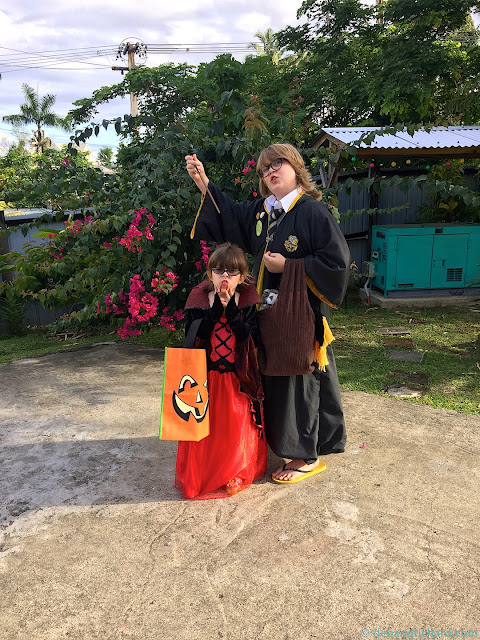 Unfortunately, the kids did not get a chance to dress up for a school day. Diwali falls on the darkest night (so new moon, therefore it changes year to year) and fell same as Halloween week this year. So the Friday before Diwali/Halloween weekend, for mufti day the kids could wear Indian clothing. So I picked Clarissa up a pretty sparkly dress. It's been torturing her hanging in the closet not being able to be worn yet. So she was quite exited to put it on that morning (I even let her put on some lipstick for school!). 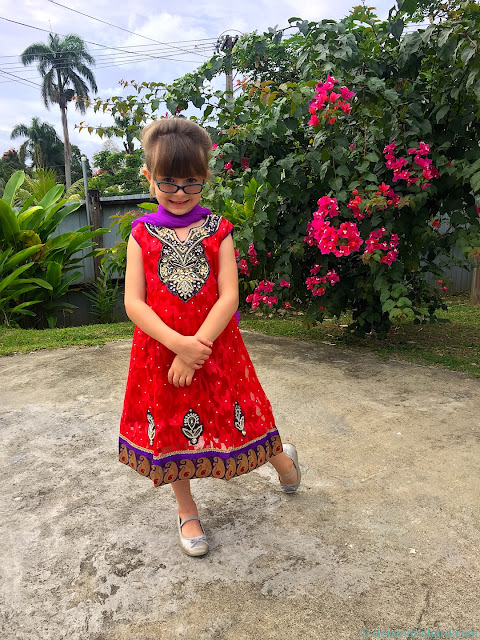 And when she got home, she told me her good friend was wearing the same dress, just in a different color and that made her day! Her friend's mom was kind enough to send me the picture (you may recognize her friend as Blossom from the PPG!). 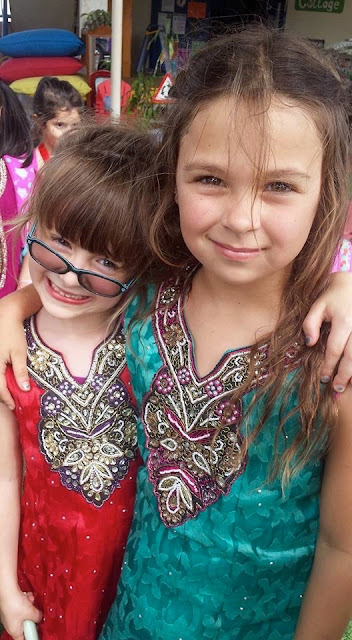 Anyway, hopefully I haven't set the bar too high this year in regards to Halloween costumes....

Sewing Details:
For PPGs, I found a tank dress that Clarissa had in size 6-8y and just traced it to make a pattern. I then made the PPG dresses in the same fabric just different colors. I did scan the pattern before making the first dress in case I messed up cutting with the rotary cutter so that would all be close to identical. If you would like the pdf, drop me an email.

For the Robe, I followed this tutorial and on a tip I found somewhere else, I traced a sweatshirt hood to make a pattern and used that for the robe hood.
Posted by Deb at 8:00 PM