And the award for slackest updater goes to.....

So we've super busy since I've actually sat down and done a real blog post, but since it I appears I have had something bite my toe and I need to keep it elevated here I am, giving up my award in the middle of award season.....sigh!

We moved into our final house the second week of March (that ended up being several weeks delayed due to TC Winston, but it's all good now...well worth the wait). The third week of March our consumables/supplemental HHE arrived from the US (initially these were suppose to be delivered the day after we moved in, but were delayed due to spiders being spotted when the container containing our crates was opened. The entire container need to be fumigated/sealed for a day and then aired out for a day before delivery). After unpacking, I earned my 'mommy of the year' award and got someones new Christmas bike put together.... 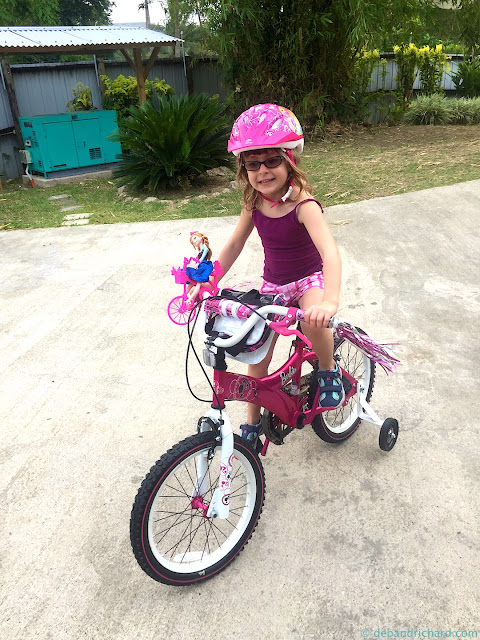 Now, if it could stop raining nearly every weekend, we could head down to the sea wall and practice riding without training wheels!

We went to an Easter Party put on by the US Embassy and the American Women's Association (also known as the AWA....I've joined...I'll talk about them again). Someone was super excited for the egg hunt. 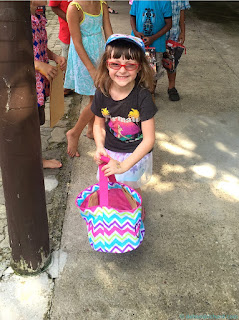 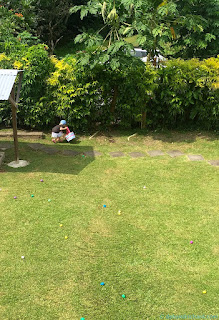 Disregard the stalker like focus of Mason, somebody is in middle school now. Mom can't be getting too close taking pictures of him admitting to having fun.... 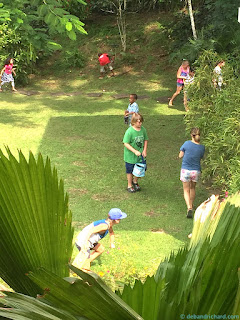 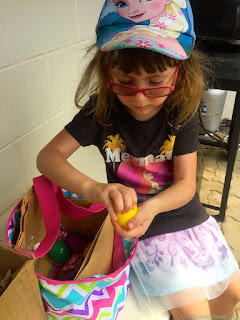 During the 4th week of March, all the paperwork was finished up and we got to drive our car on the wrong side (to us) of the road on Tuesday. The following Friday (being Holy Friday and all) was the kids first school holiday and the beginning of their first term break! The term break was a good length, a little over two weeks. Long enough for the kids to get bored but short enough that they didn't really get out of the swing of being in school.

We had time to play with the GoPro in the pool and figure out the buttons (FYI, you can't use the cool iPhone app underwater...aka kids can't swim with the camera underwater while I sun myself and hit record). 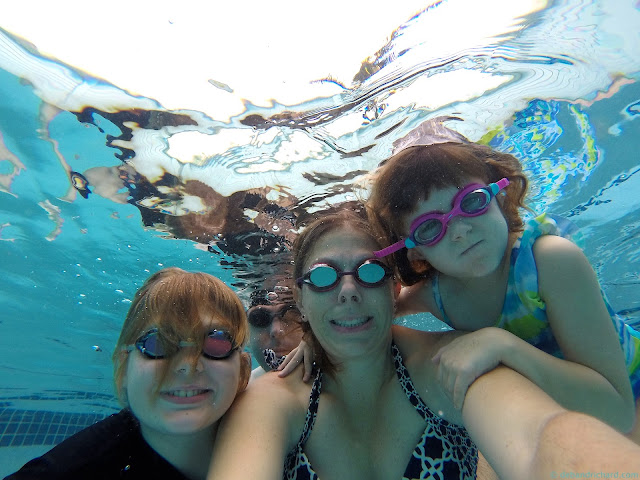 At the end of March the last of our belongings we were waiting on (we do still have things in storage), were set to be delivered. They opened the container and found a spider (they actually emailed us a photo, probably thinking we wouldn't believe that 'excuse' again).....so we had to wait another weekend for the fumigation process. It worked out well. On Mondays, Malika, our housekeeper, is here, so she helped unload boxes as the movers brought them in. OUR KING SIZE BED ARRIVED! Amazingly, in the first crate they opened. I had bought some new bedding (our old sheets/quilt/mattress cover were 8+ years old and that mineral rich Tbilisi water did them in!). They had arrived in our supplemental HHE several weeks earlier and were already washed and ready to go. So while the movers were opening the second crate, I put together the bed and then Malika put the bedding on....so comfortable that first night....too bad it had a musty/'6 months in a container followed by fumigation' odor that lasted a couple days.

Luckily (for me), the last week of the term break we had two back to back tropical depressions followed by Tropical Cyclone Zena (who, though named after a warrior princess, ended up fizzling out as she made landfall)......so it essentially rained non-stop for a week or so. So hanging out inside, playing Barbies, Legos (and whatever toy they were suddenly reunited with) & WiiU while mommy unpacks was perfectly acceptable. 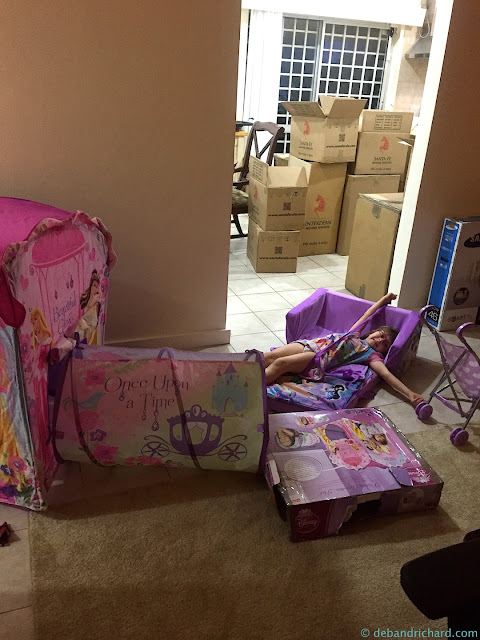 The last weekend of the term break, we ventured out of town on our own for the first time. I booked us a room for a couple nights at the Fiji Hideaway Resort....but that weekend gets a post all to itself, so you will have to wait.....all I will say is that the rain stopped, the sun came out, and one item on my Fiji Bucket list got checked off!

We returned from a much needed weekend away on Monday afternoon, the bus picked the kids up Tuesday morning for the start of term 2, production practice picked right back up (if I forgot to mention it, Mason got a part in the school production....he is loving it!). With the kids gone, now I could really make some progress digging us out of boxes and not having to stop and play snack provider every 15 minutes (or so it seems). Clarissa's class was leading the primary school assembly on Friday, so I did stop unpacking to go to that! This is part of my favorite song they have learned. Mr. Tim is leading the kids in the Bula song about their island in the sun. (Bula is hello in Fijian). Clarissa is in the front row (since their class was leading part of the assembly), second from the right.


The next week I did more unpacking. Clarissa came down with some fever mid-week. Poor thing was running a 101°F (38.5°C) temps, but no other symptoms. I kept her home for two days and she was bored senseless. She was stressing her birthday on Friday....that's all she had been talking about for weeks....she didn't want miss it. Her fever finally broke and she could go to school (so I was last minute baking/decorating cupcakes). That evening, she opened her gifts. Luckily, I had unpacked enough to find the box of the birthday figurines. These were given to me by my Grandmother (Clarissa calls her Bushia) and now I am handing them down to Clarissa. As you can see, she loves them! 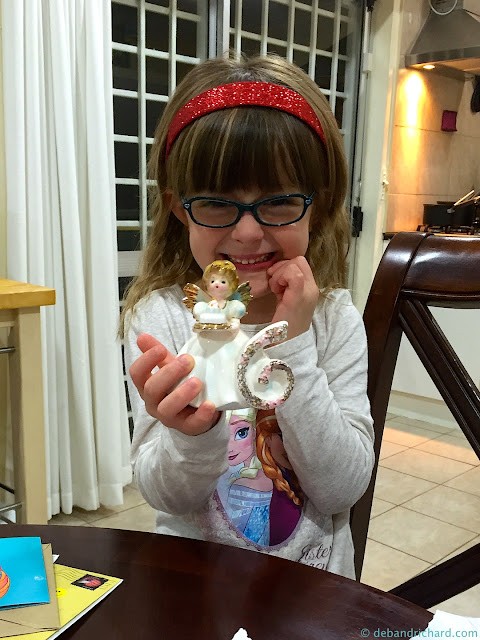 Also, on that Friday, I had a chance to do a market tour with the AWA. I've got a lot of yummy looking photos, I will save those for another post. It was nice to have someone point out where things are (I had no clue there was a second floor, even though I had gone several times before), mention the vendors that have the best quality of certain items, explain what some of the local crops are and their nutritional content, and describe ways to prepare these local items. I also scored some awesome mommy points by picking up the birthday girl some fresh flowers at the market. Malika was at the house when I got home and I discovered a hobby of hers is flower arranging. She helped me wash the ants off and put them in the vase (she has since added more greenery from the yard and made a second vase worth of flowers with stuff from our yard). These cost me about $5US! 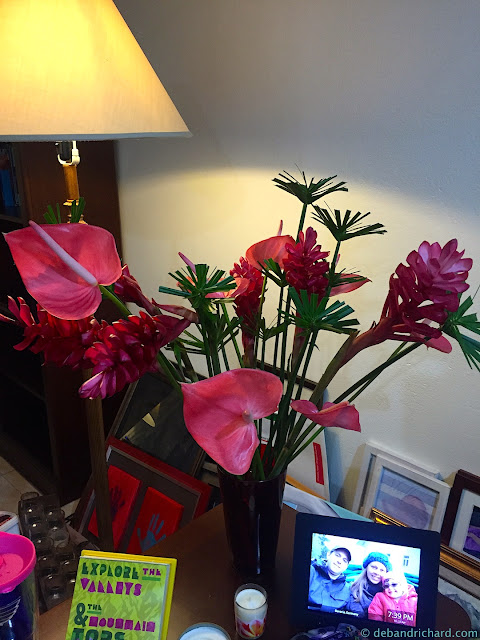 Disregard the pile of unhung artwork in the back of the above photo....lol! So, we had warned Clarissa we probably wouldn't have the house unpacked enough to have her birthday party on her birthday weekend....but I worked and was able to get the house relatively presentable to have her party last weekend (it was sunny with all activities planned for outside and we just kept two bedroom doors closed)!! I will save that cuteness for another post too....

Monday at some point, I noticed my toe was a little sore. I figured I had stubbed it or something running in the rain. Clarissa's stomach wasn't feeling well, so she stayed home from school yesterday. We decided to have a little spa mani/pedi girl time and I got out the fancy bubbly foot soak.....oops! About an hour or so after that warm water soak, my toe/foot was swelling nicely, getting difficult to walk on, and starting to bruise even. I then attempted to undue that and ice it. After dinner was made, I pretty much sat down, propped it up and didn't get it up again. I took some ibuprofen before bed and could walk again this morning. The swelling had gone down substantially! I still went up to the medical unit at the Embassy to have it checked out (I do have a dive planned for tomorrow...priorities people!) I have full range of motion in my toe (which rules out a break), but he could see the red bump protruding out of my toe. So it is likely a bite or sting of some sort. I just need to monitor it, keep it elevated, continue taking ibuprofen to keep swelling down, and as long as my fins are not too snug I can go diving. So here I am, following orders, elevating my foot (so I can't finish getting the house put together), my fins aren't too snug...therefore tomorrow....I'm going diving! I do promise that soon there will be a post giving you the grand tour of our house!