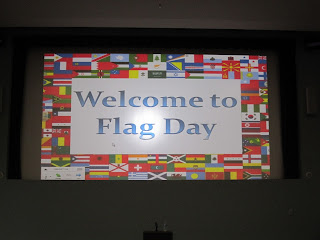 So I sat in an auditorium waiting for the program to start.....finally, the standing room only auditorium quieted when the mike was turned on. Introductions of everyone on stage, a short speech by a member of the specialist class. And finally the part everyone was waiting on....a completely random mixed up presentation of flags.....I picked up on Richard's CDO (its the gov't, would you expect anything less...Career Development Officer) would stand before a IMS (information management specialist) flag was announced. \

So when she stood up, I hit record.....I apologize for the focus being on the head of couple in front of me...but I was filming with one hand and taking photos on my iPhone with the other....
And after all 95 flags were distributed (oh and Richard's was around flag #80...no stress.....it was over! 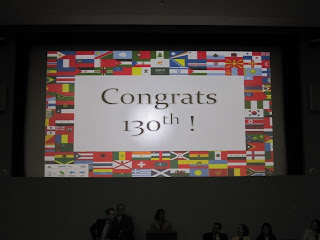 Richard was part of the 130th specialist class.....the number started around the 1950s.....so not too terribly many classes....this is an elite group of professionals!

Here is a shot of all the IMS people in Richard's class (less one guy who jetted early) with a statue of Ben Franklin on the FSI campus (looks a lot like a college campus). 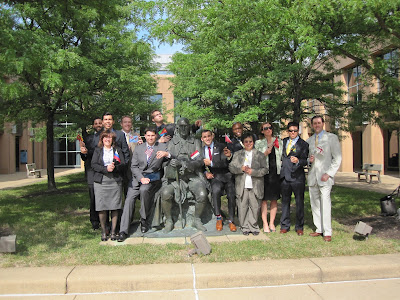 Then it was off to Happy Hour to celebrate (or chase a 3 year old around in my case)!
Posted by Deb at 4:26 PM